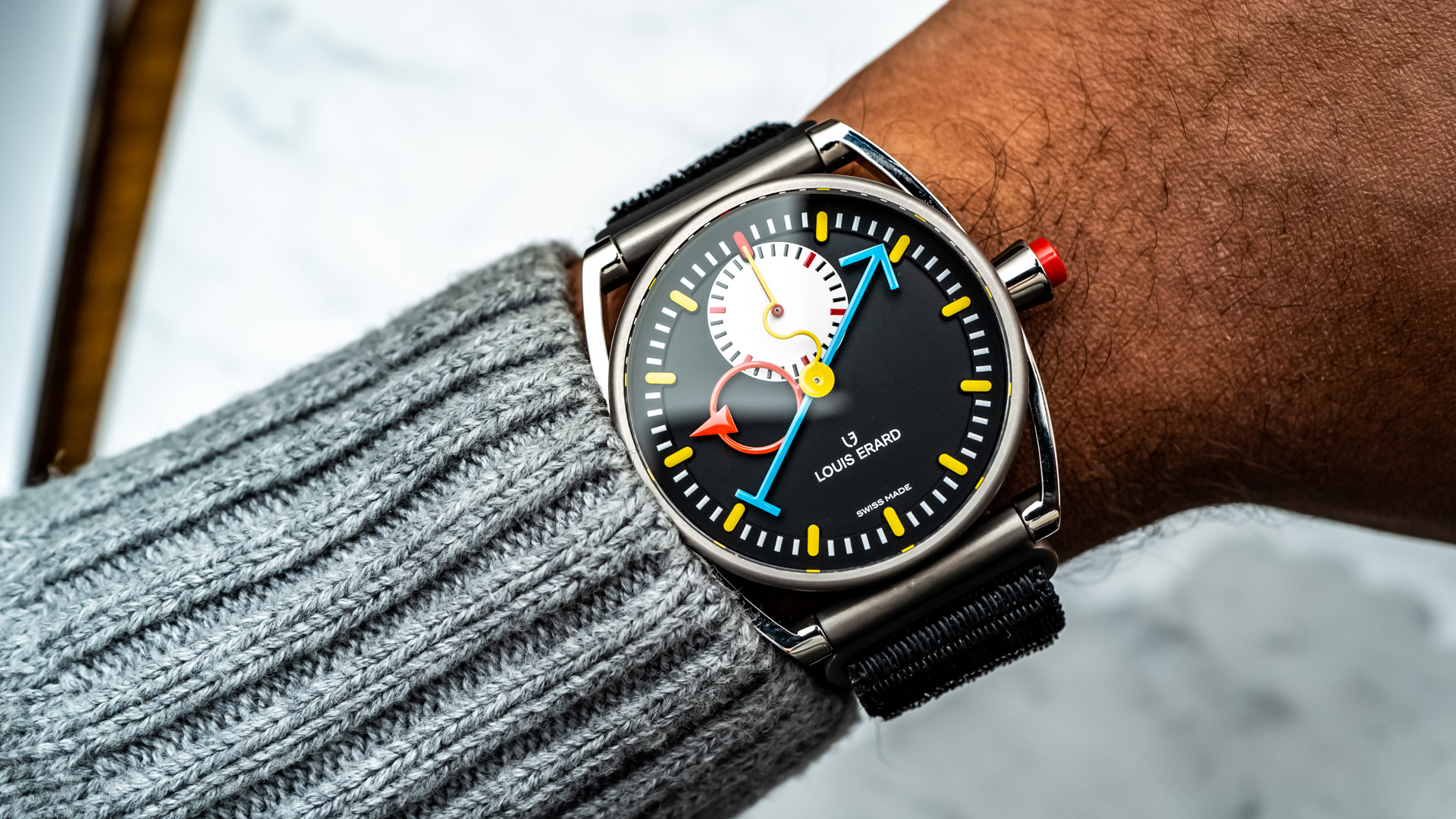 I was able to get my hands on Le Chrono Monopoussoir, so all the original photos here will be of that model, while the rest are provided by Louis Erard. 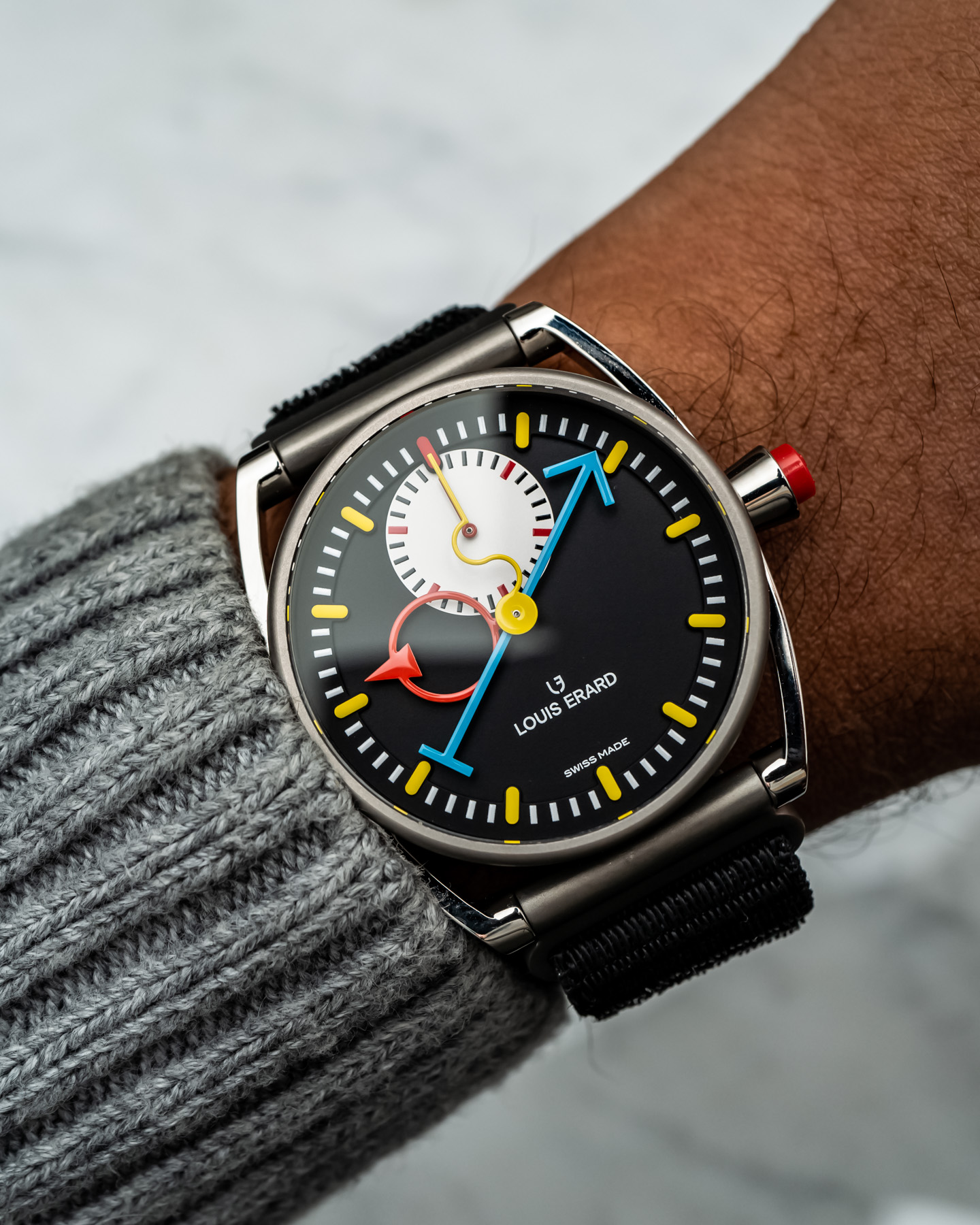 All three of these pieces come in a new architecturally stylized case that, to me, appears to have hints of De Bethune design inspiration. Done in titanium, these cases are defined by the vertical sidebars (Louis Erard calls them “brancards”) that extend up into the lugs. The quick-release strap (done in nylon and grade 2 titanium) is highly comfortable and supple as well as easy to use while maintaining the featherweight heft of the titanium watch. All three measure 40mm-wide, though they have varying case thicknesses that I’ll address when discussing each piece. Oh, and all three have a 22mm lug-width and are water-resistant to 100M. 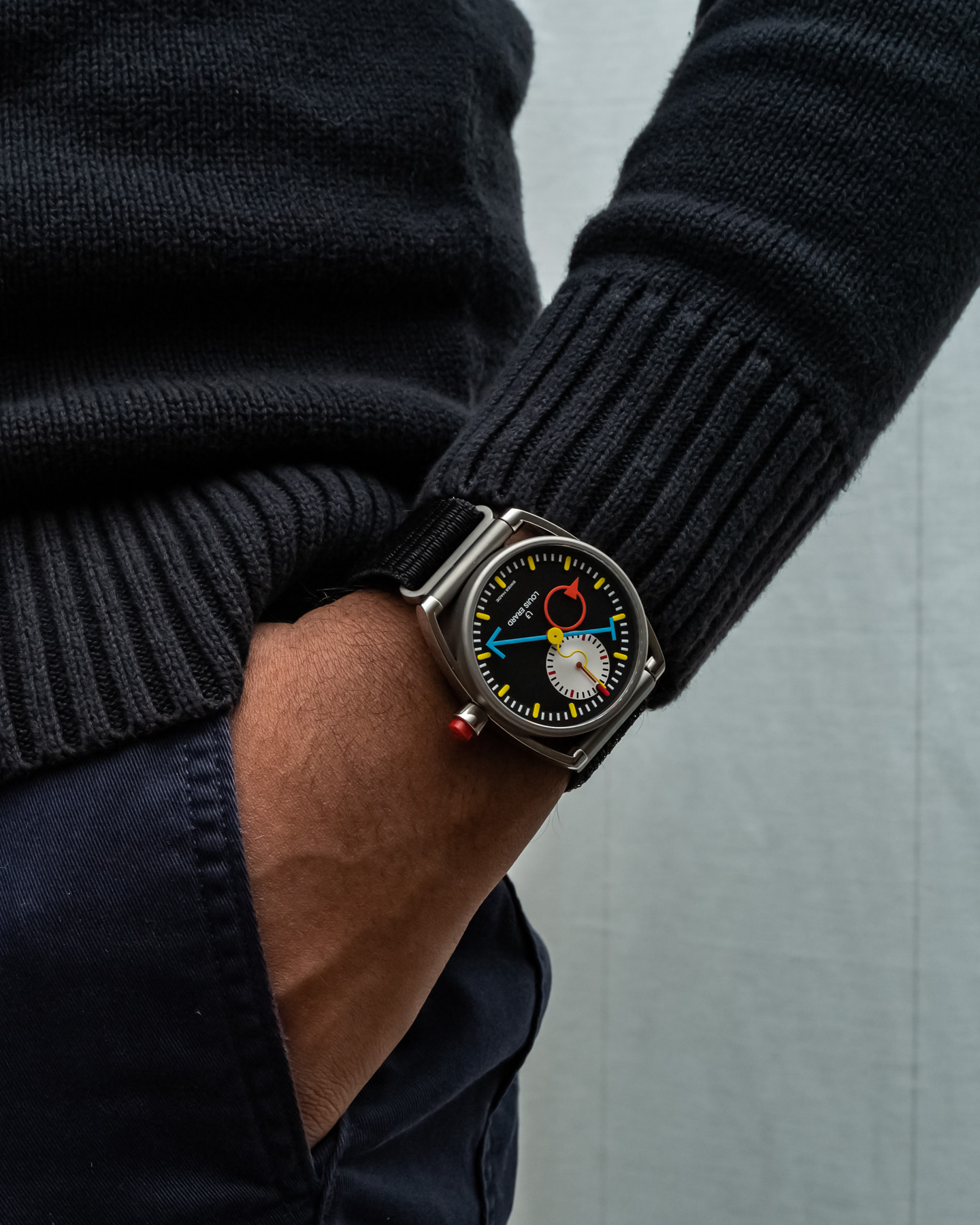 Of the three pieces, I’ll begin with the one that I got to spend some hands-on time with. Le Chrono Monopoussoir is an all-new chronograph design that reflects Silberstein’s take on this relatively obscure complication. The circular red hour hand and blue-arrow minute hand are joined by a yellow chronograph seconds hand, and the chronograph counter subdial at 12 o’clock has a simple straight red hand. As usual, all the hands are lacquered, which I never tire of gazing at under different light. 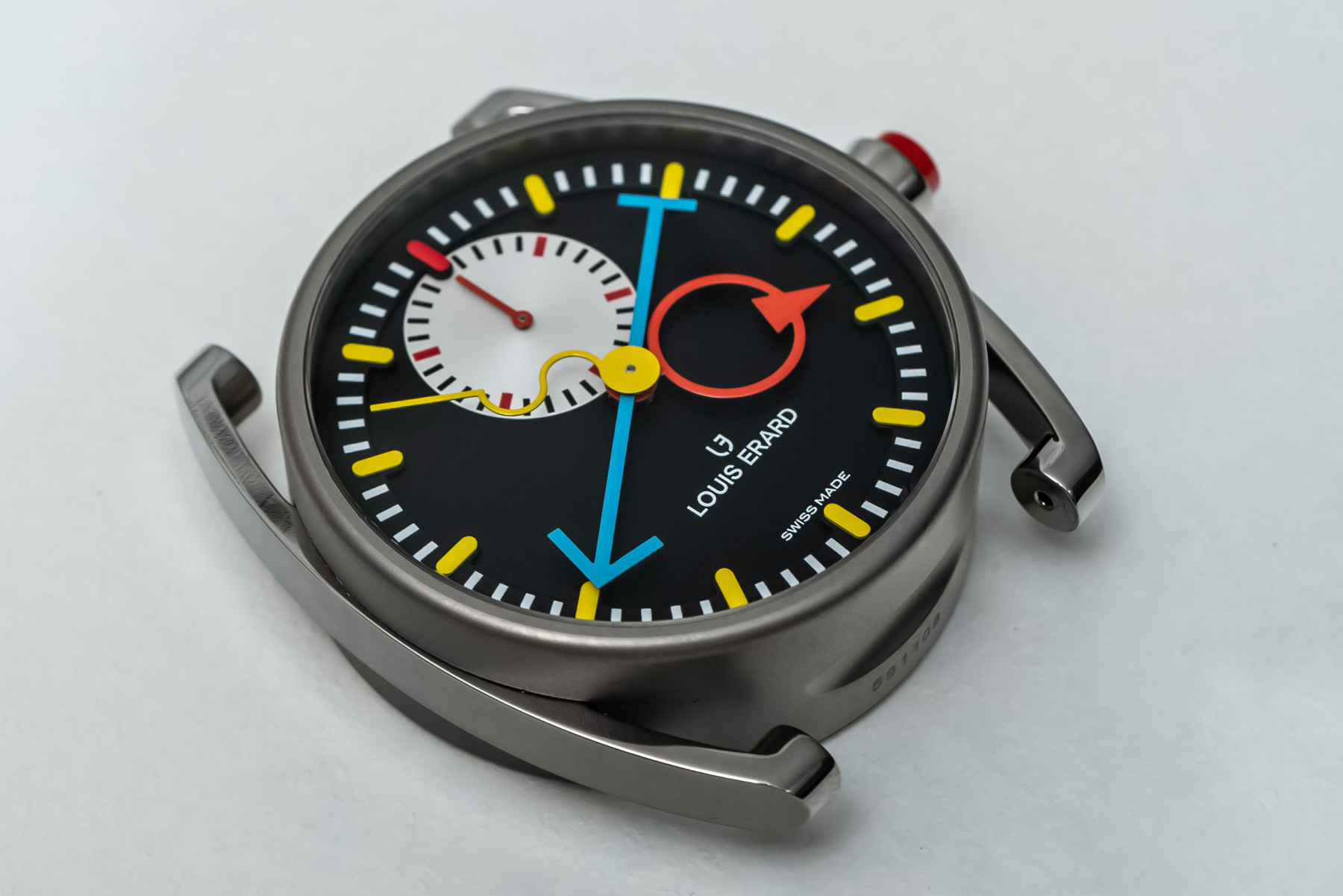 The mono-pusher chronograph is activated via the pusher on the crown, which is done in red ABS (Acrylonitrile Butadiene Styrene) plastic. ABS is a very strong and anti-corrosive plastic that is easily used in injection molding or 3-D printing and is used for applications ranging from LEGO bricks to golf club heads. I’m sure many people will be hung up on, “It’s a plastic crown?!” but it’s clearly an intentional choice that will appeal to the 178 people who will own one of these. One push activates the chronograph hand, another push pauses it, and a third push resets the chronograph hand. 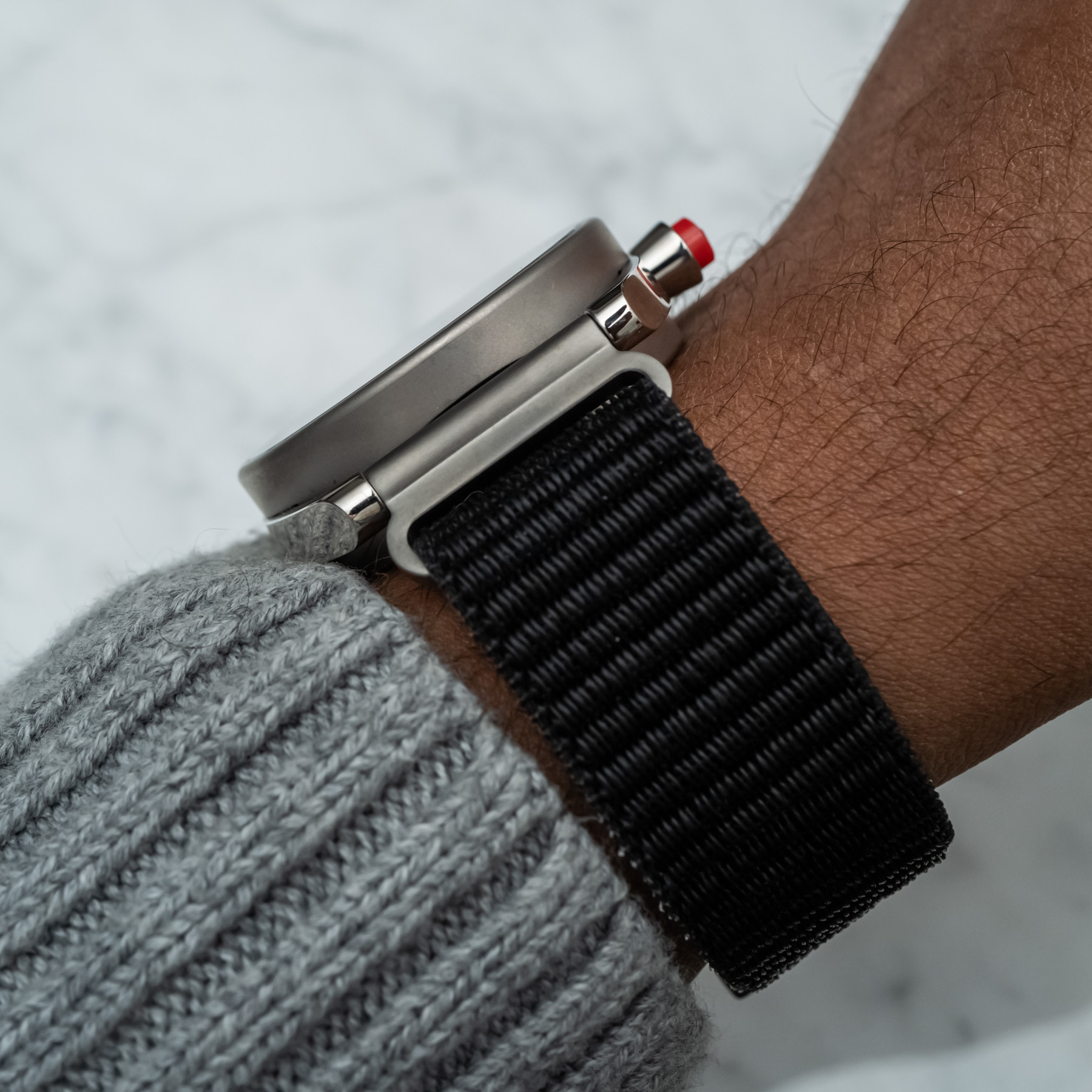 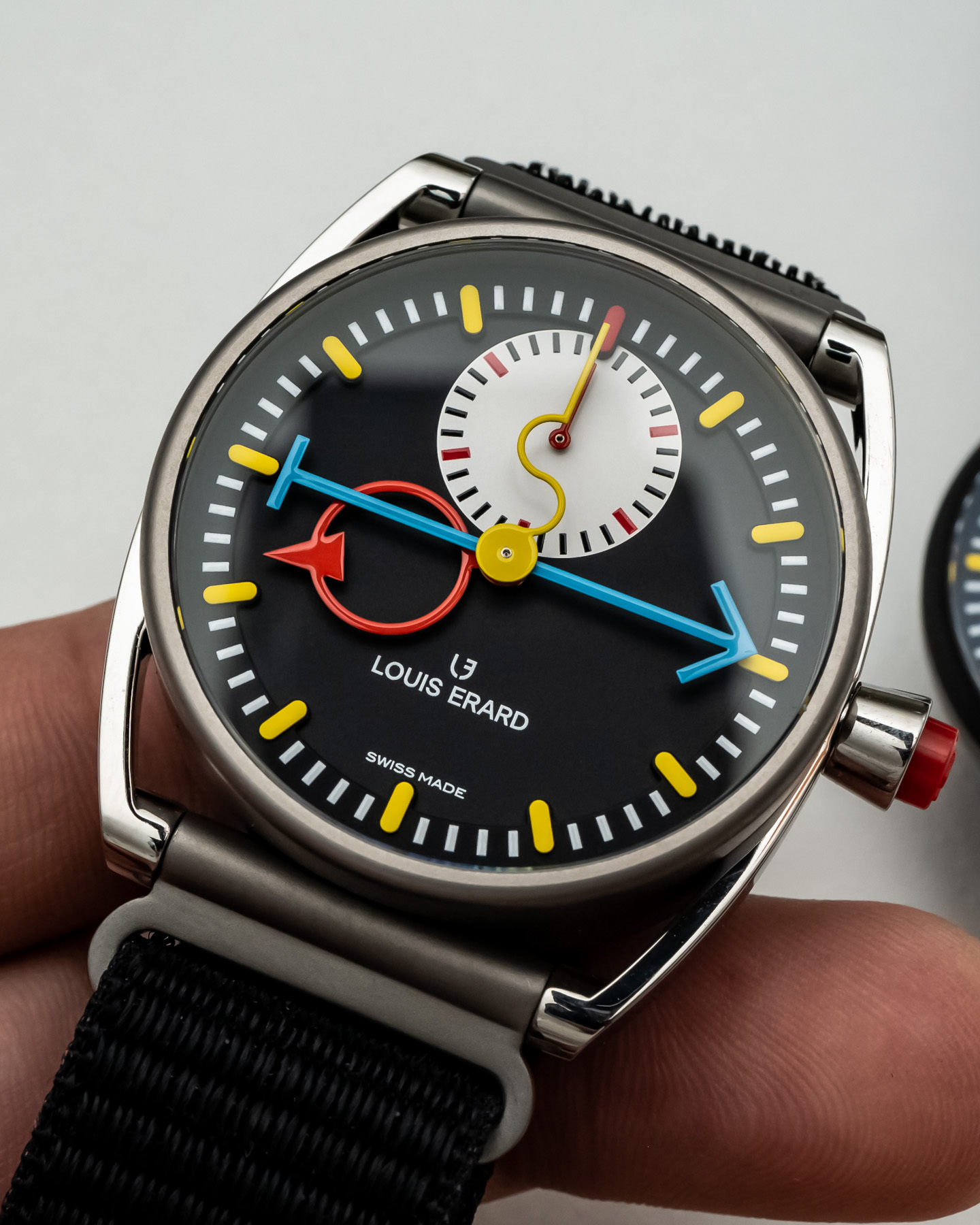 The titanium case is 40mm-wide with a lug-to-lug height of 47mm, and at 13.9mm-thick, it’s the chunkiest of the three. I love that Louis Erard went for such a stylized and distinct case here, as it tastefully accentuates Silberstein’s quirkiness while also pulling off a cool sports watch that is like nothing else out there. 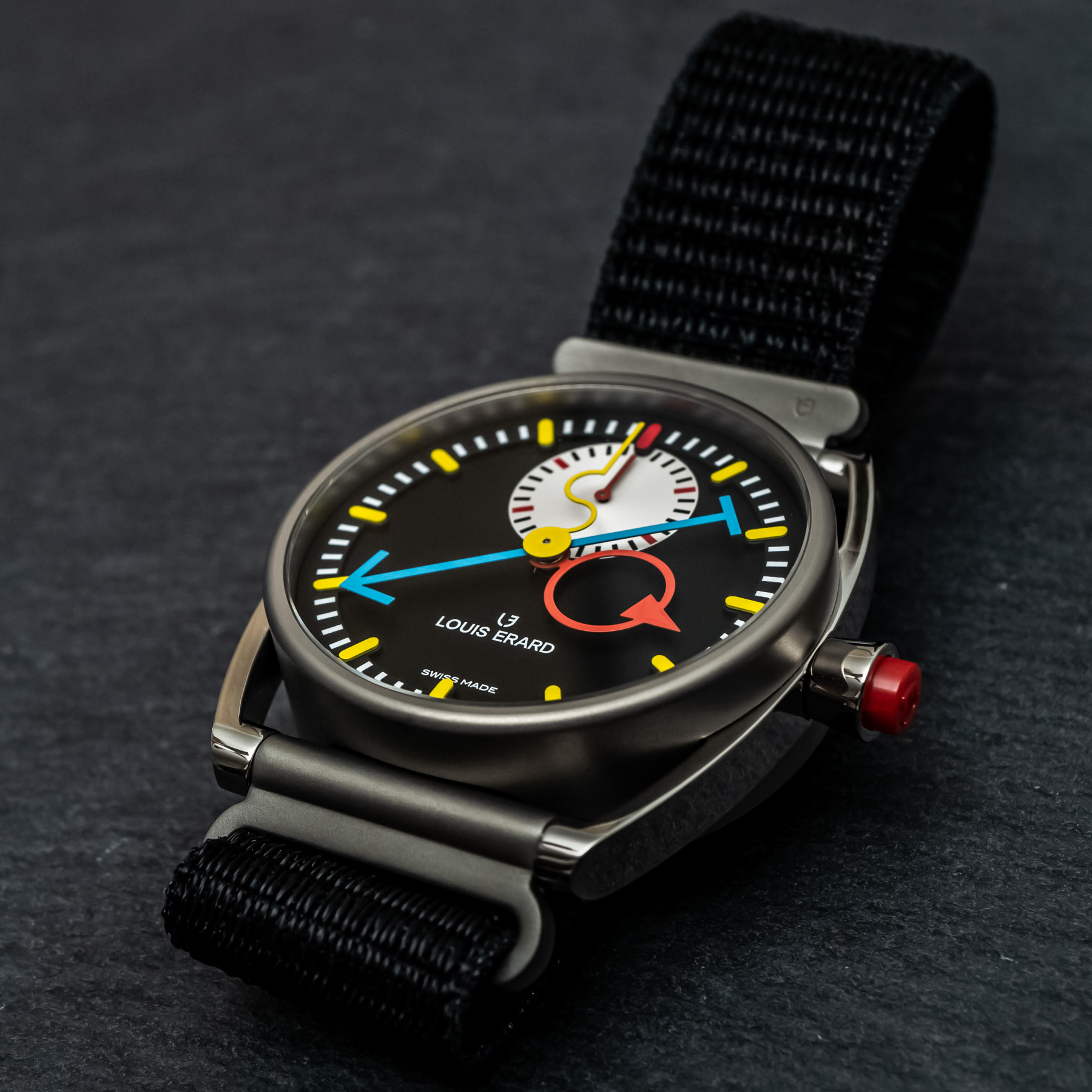 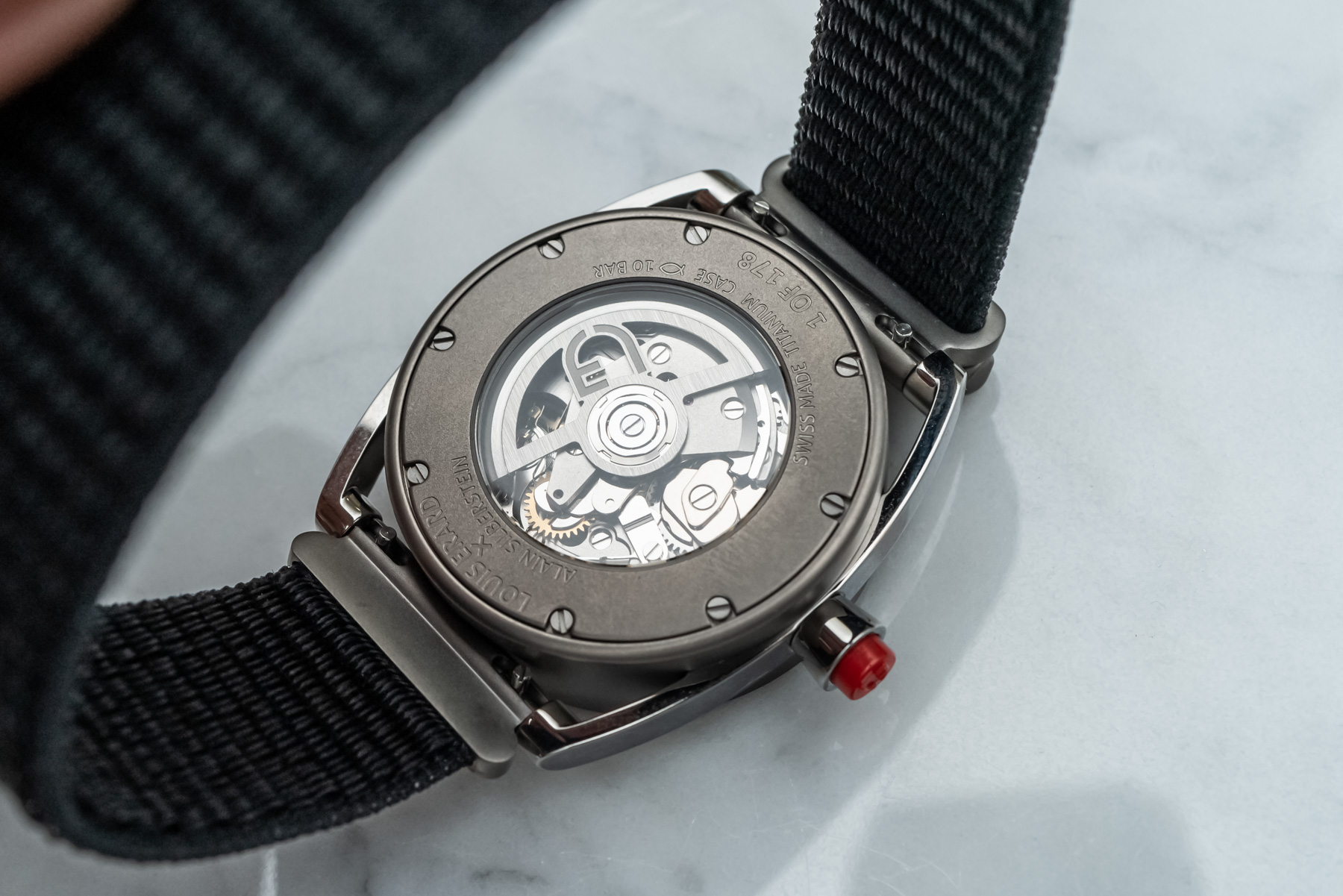 From the exhibition caseback, you can see the Sellita SW500 MP Ca movement that Louis Erard has used for previous mono-pusher chronograph watches. The skeletonized rotor is certainly a very nice touch, but I’d ditch the sapphire crystal altogether and use the caseback as another canvas for Silberstein. In any case, the movement operates at 28.800 vph and has a 48-hour power reserve. 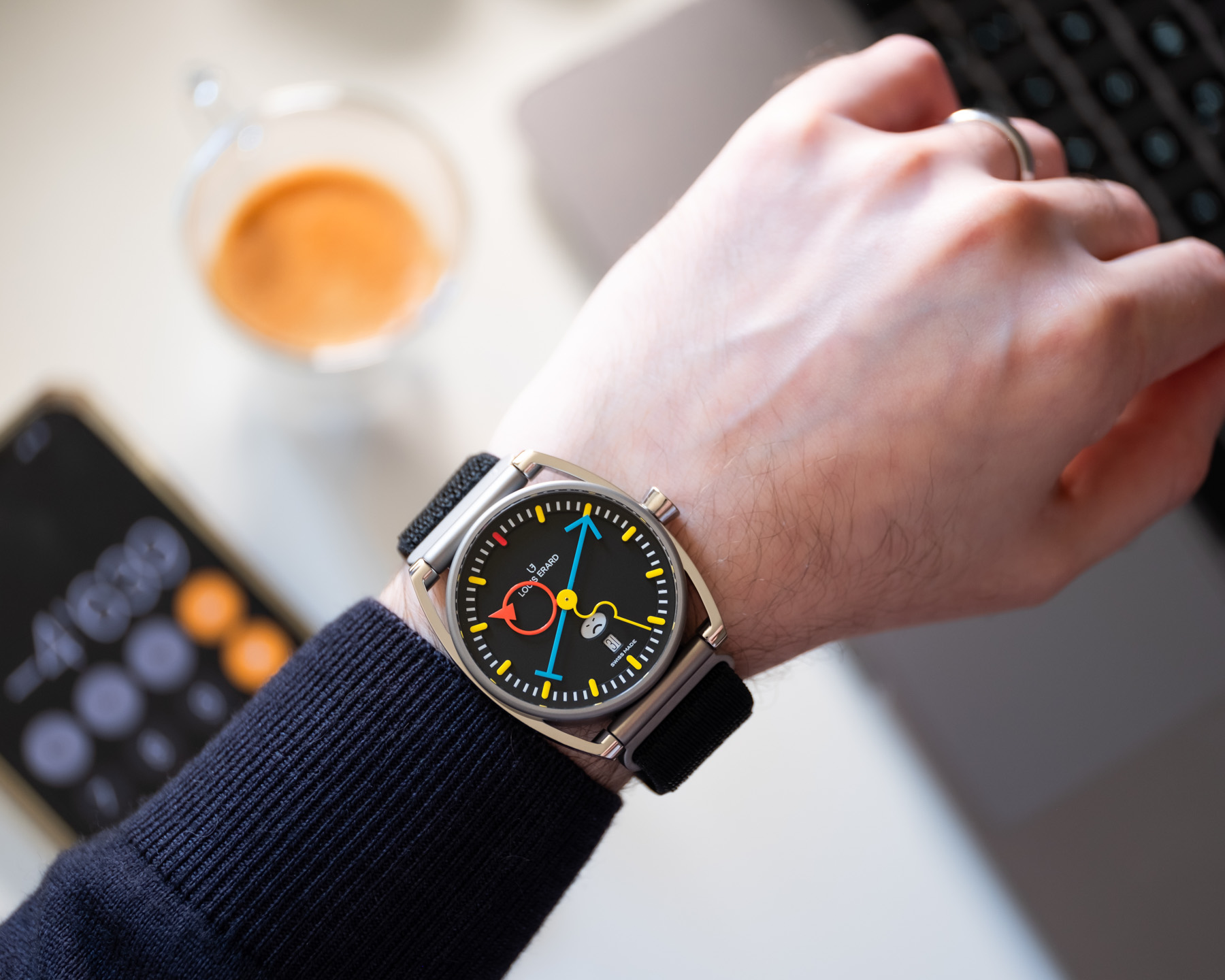 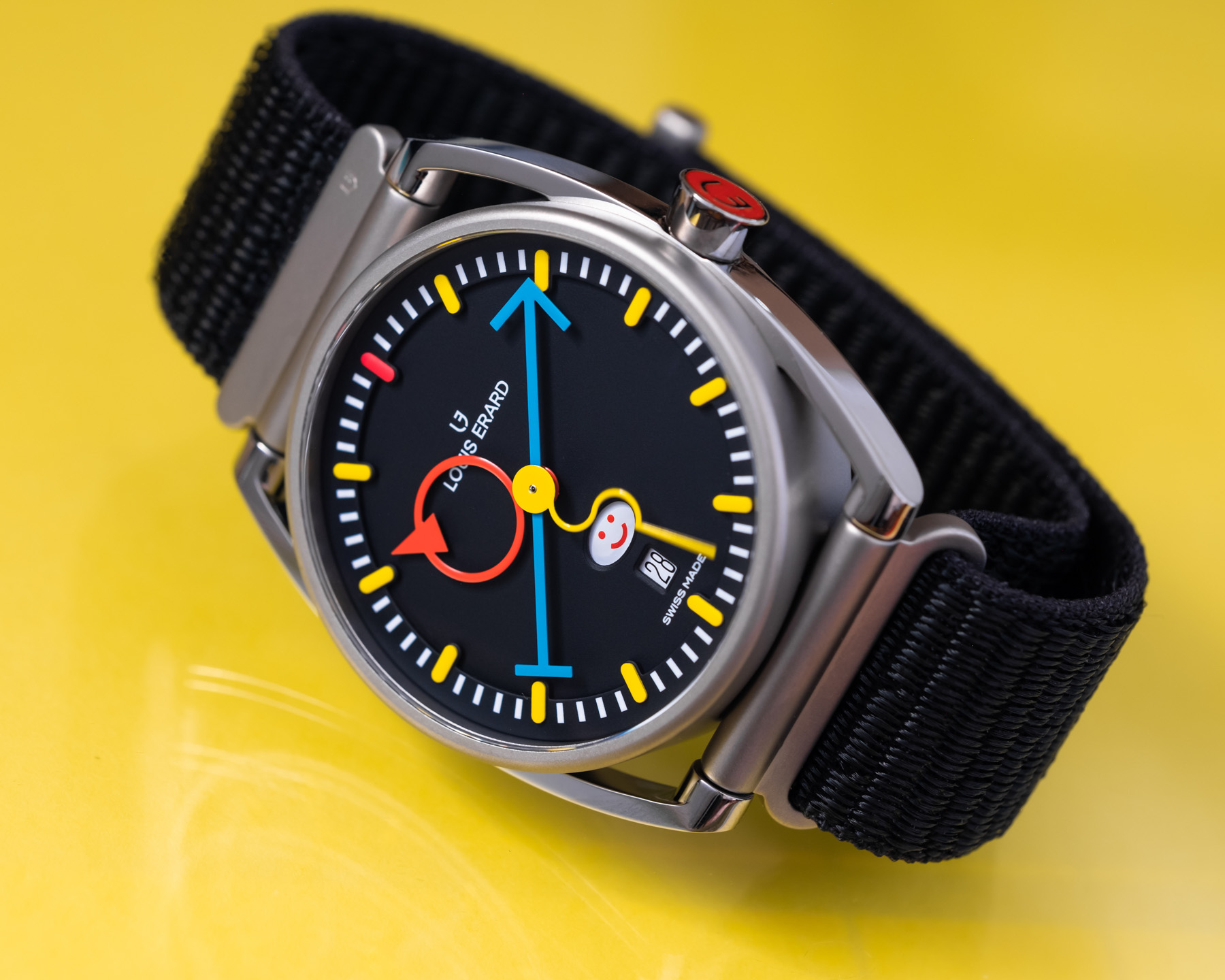 The La Semaine Louis Erard x Alain Silberstein is likely the one I would pick if I were to buy one of the three. Along with the hour, minute, and seconds hands and date window, it has a day-of-the-week indicator that is represented by a series of smiley faces. With happy or cranky faces, it’s really up to the wearer to set the mood of the day. It’s such a fun complication, and I really cracked up when I first saw a photo of the angry face. 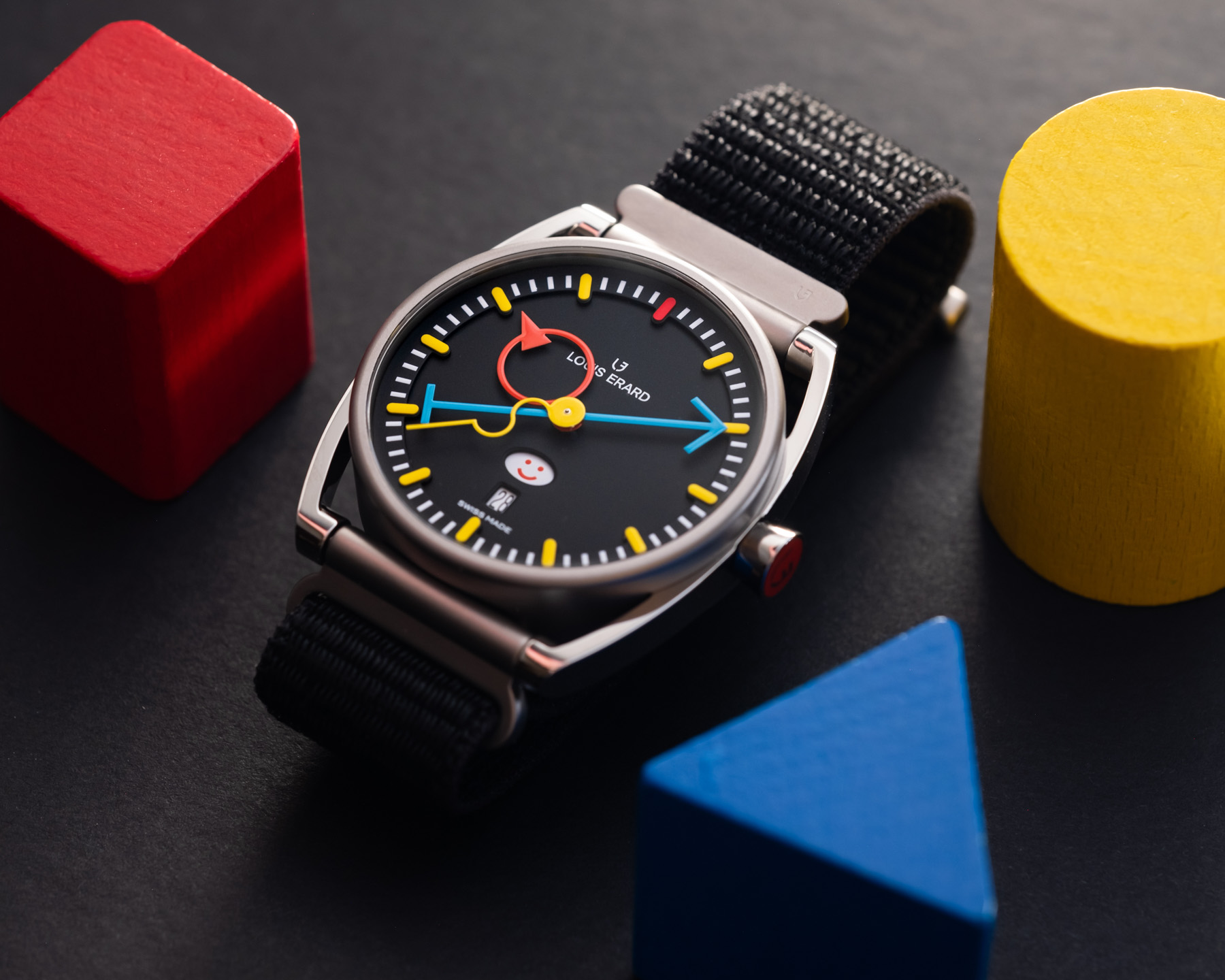 The case here is the same as with the Monopusher but it’s significantly slimmer at 11.6mm-thick. Done with a modified ETA 2836-2 movement with the skeletonized rotor, it operates at 28,800 vph and has a power reserve of 38-hours. 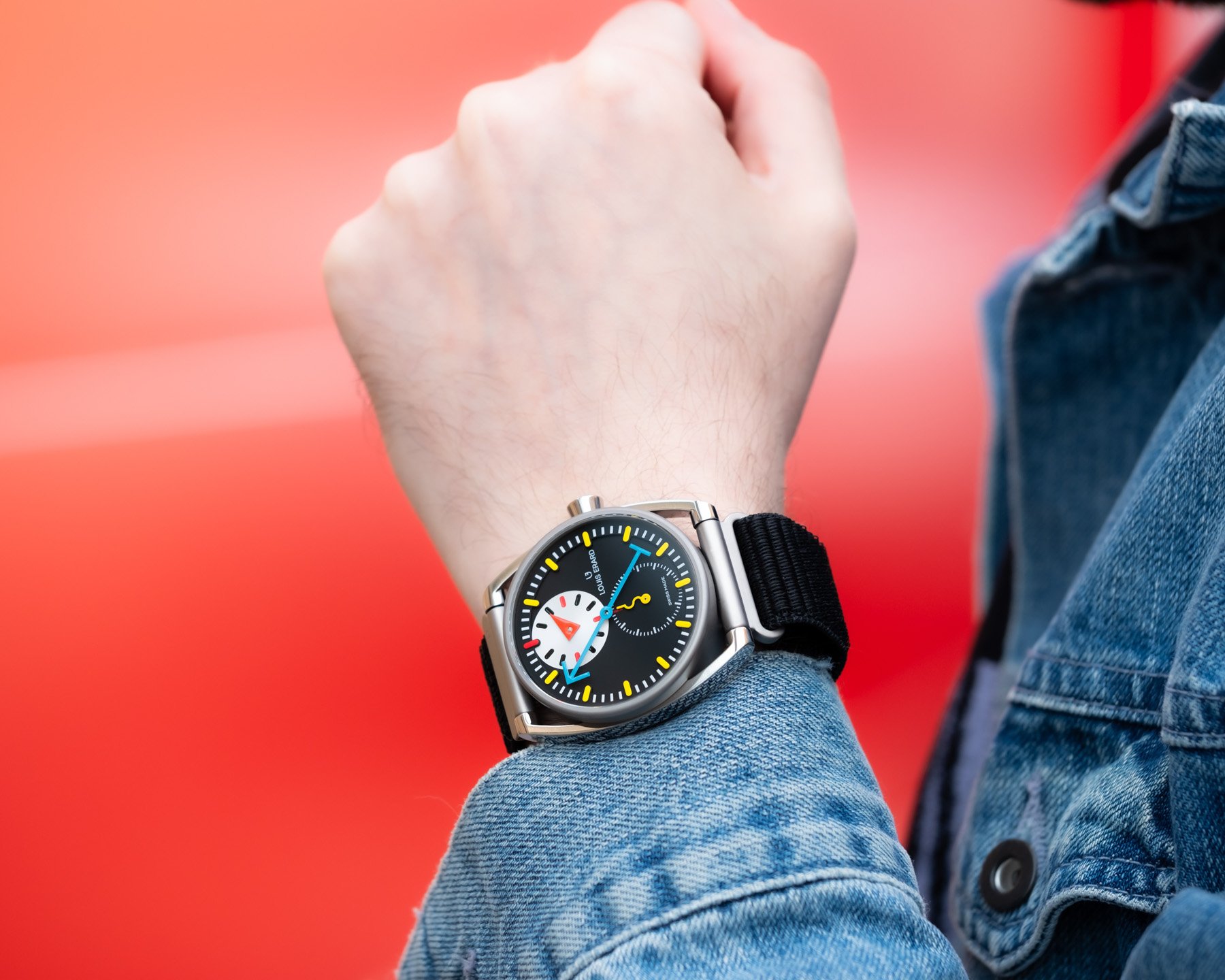 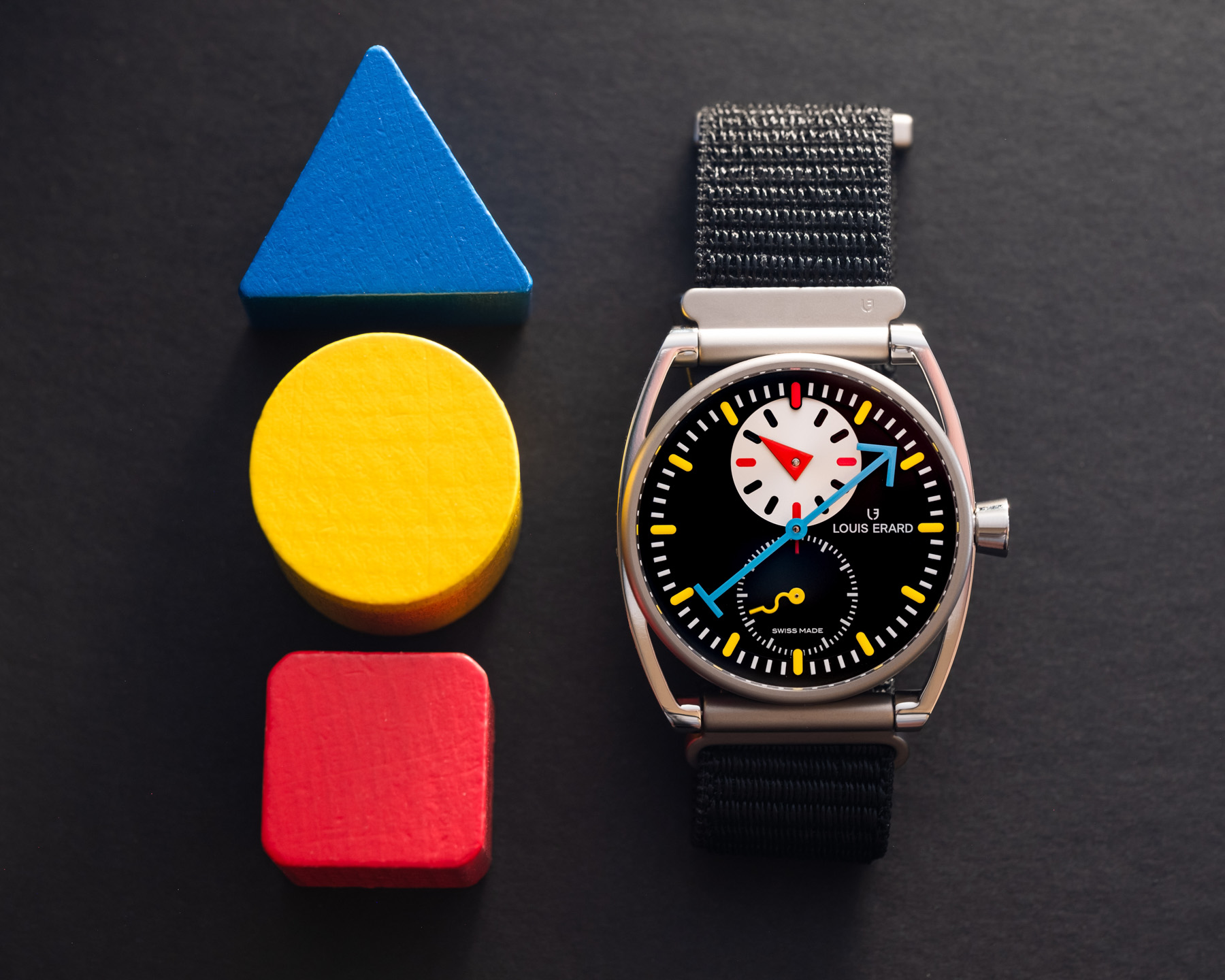 Finally, there is Le Régulateur Louis Erard x Alain Silberstein II, which the brand calls the “central piece” of Le Triptyque and is a sort of follow-up to last year’s Louis Erard x Alain Silberstein Excellence Regulator (one of which I’m lucky enough to own). With the same 40mm-wide and 11.6mm-thick case as seen on Le Semaine, the dial has a blue minutes hand, a sub-dial at 12 o’clock with a red triangular hour hand, and a subdial at 6 o’clock with the squiggly yellow running seconds hand. 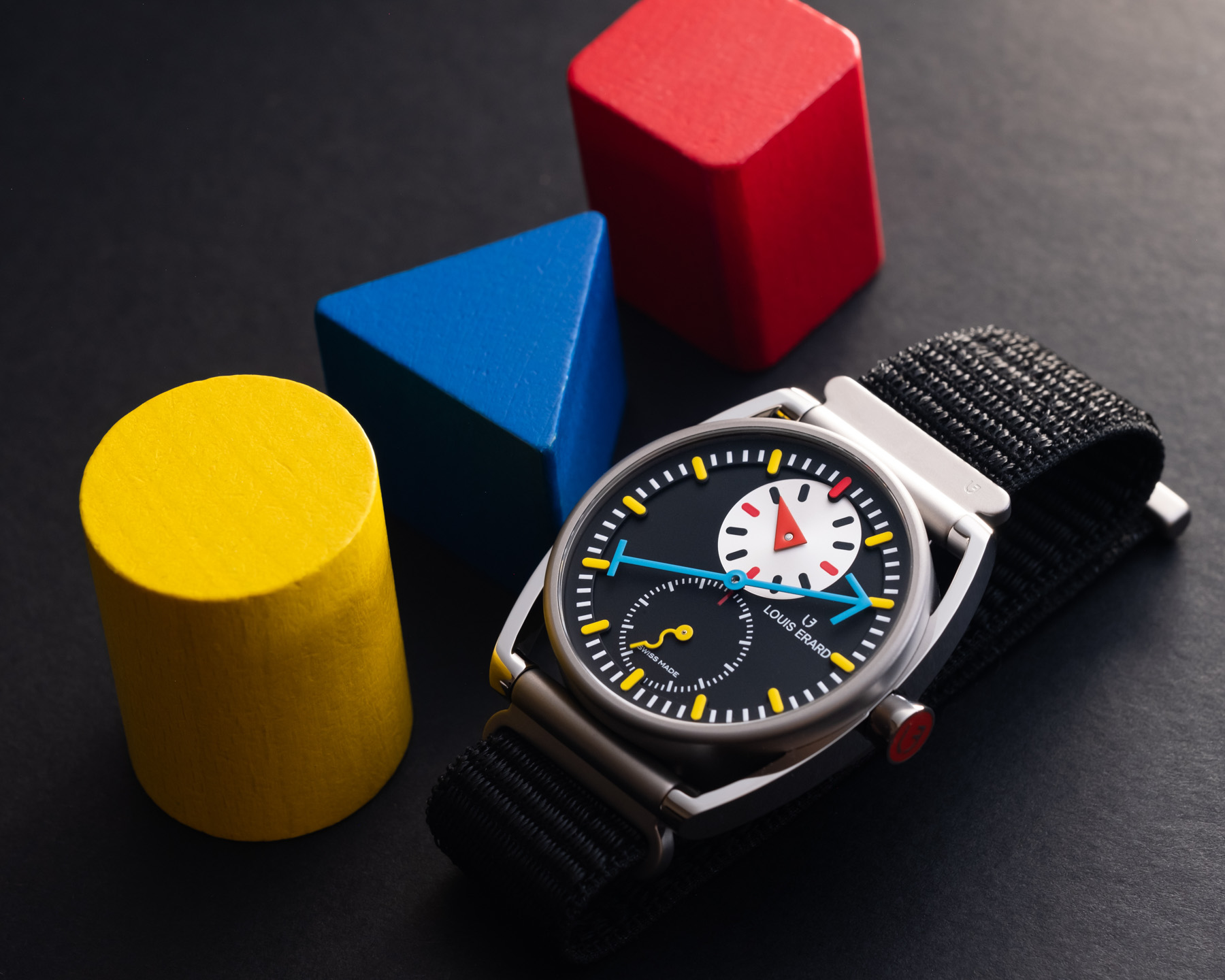 Le Régulateur II uses a Sellita SW266-1 that also boasts the skeletonized rotor and operates at 28,800 vph with a 38-hour. power reserve. This is, obviously, an automatic movement, unlike my Excellence Regulator, which has a manual wind ETA Peseux 7001 with a Louis Erard RE9 complication module. And, once again, Le Régulateur II comes in a titanium case that measures 40mm wide,  47mm lug-to-lug, and has a thickness of 11.6mm. As with the other two, it comes with the quick-release nylon strap that I’m such a big fan of (especially with summer coming up).

Visually, I have to say that the Regulator is the ideal layout for Silberstein’s design as it keeps everything in neat areas while keeping the dial nice and balanced. Of course, for watches that are a niche within a niche, it’s really just a matter of personal taste. 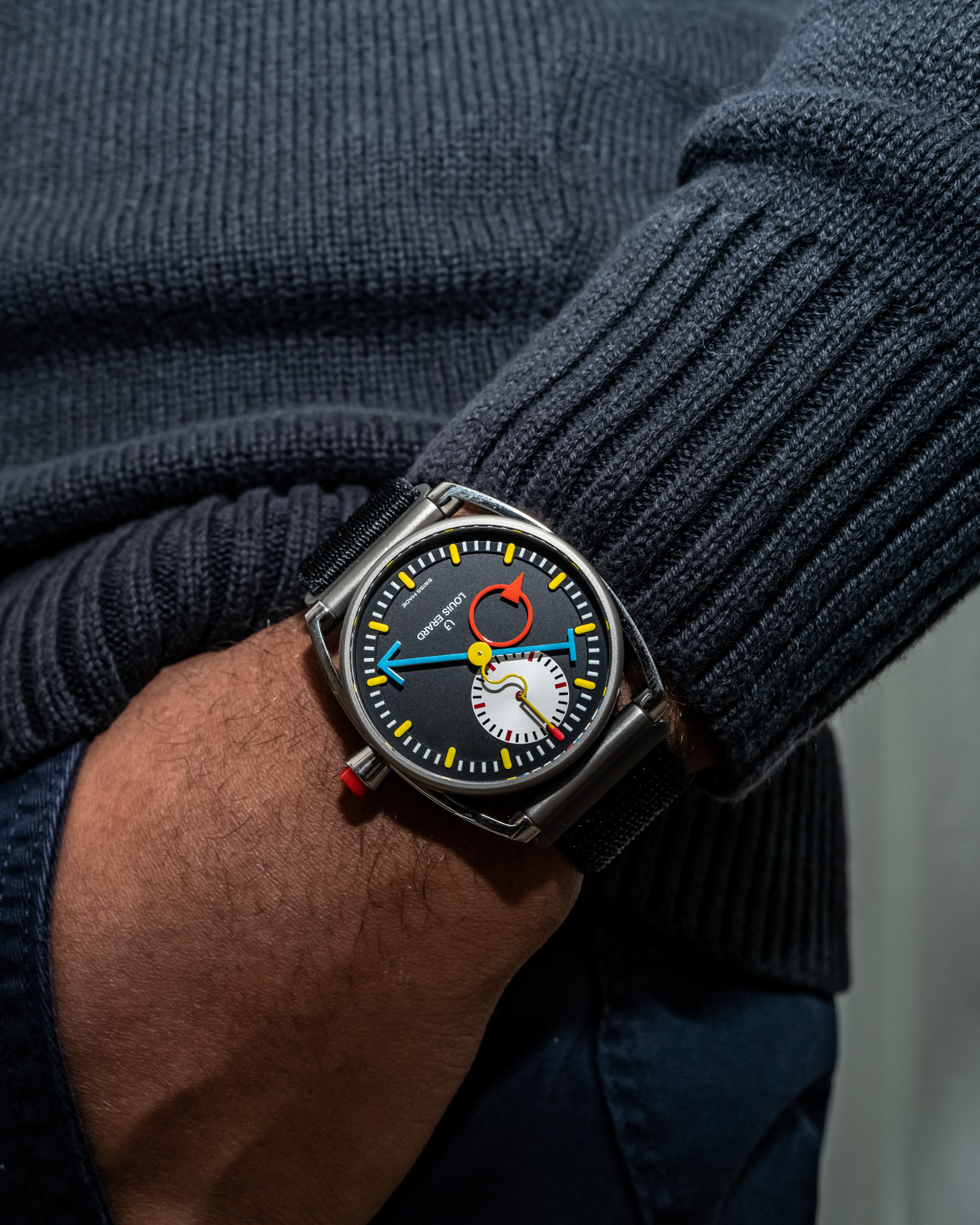 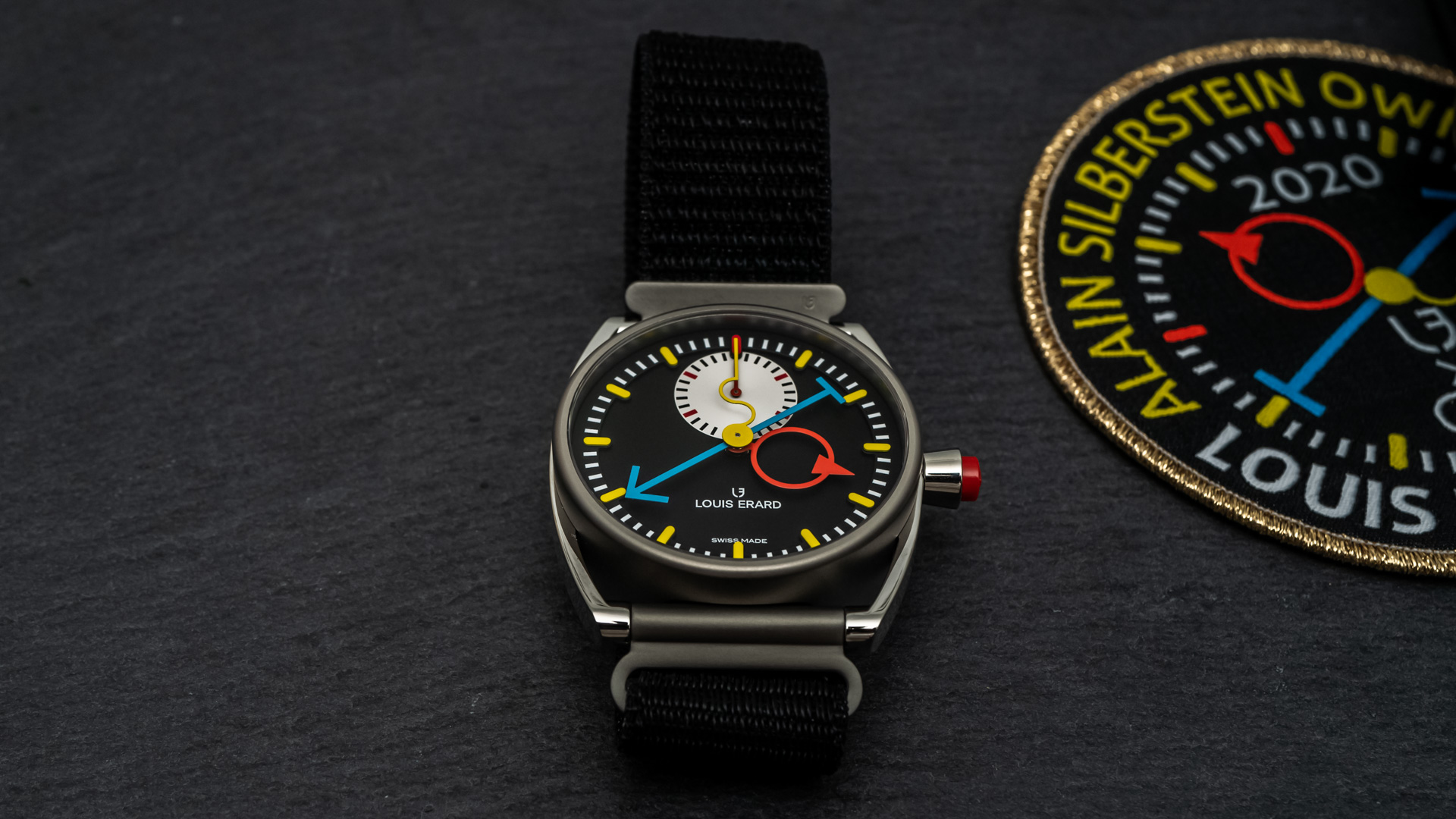 Last year’s collaboration between Louis Erard and Alain Silberstein set the pace for some incredible work the brand is doing with designers (such as Vianney Halter). Le Triptyque Louis Erard x Alain Silberstein takes it a step further with these new cases, which I predict will be divisive but beloved among the collectors. Silberstein design aside, Louis Erard gets points for creating such a cool titanium canvas with this case. 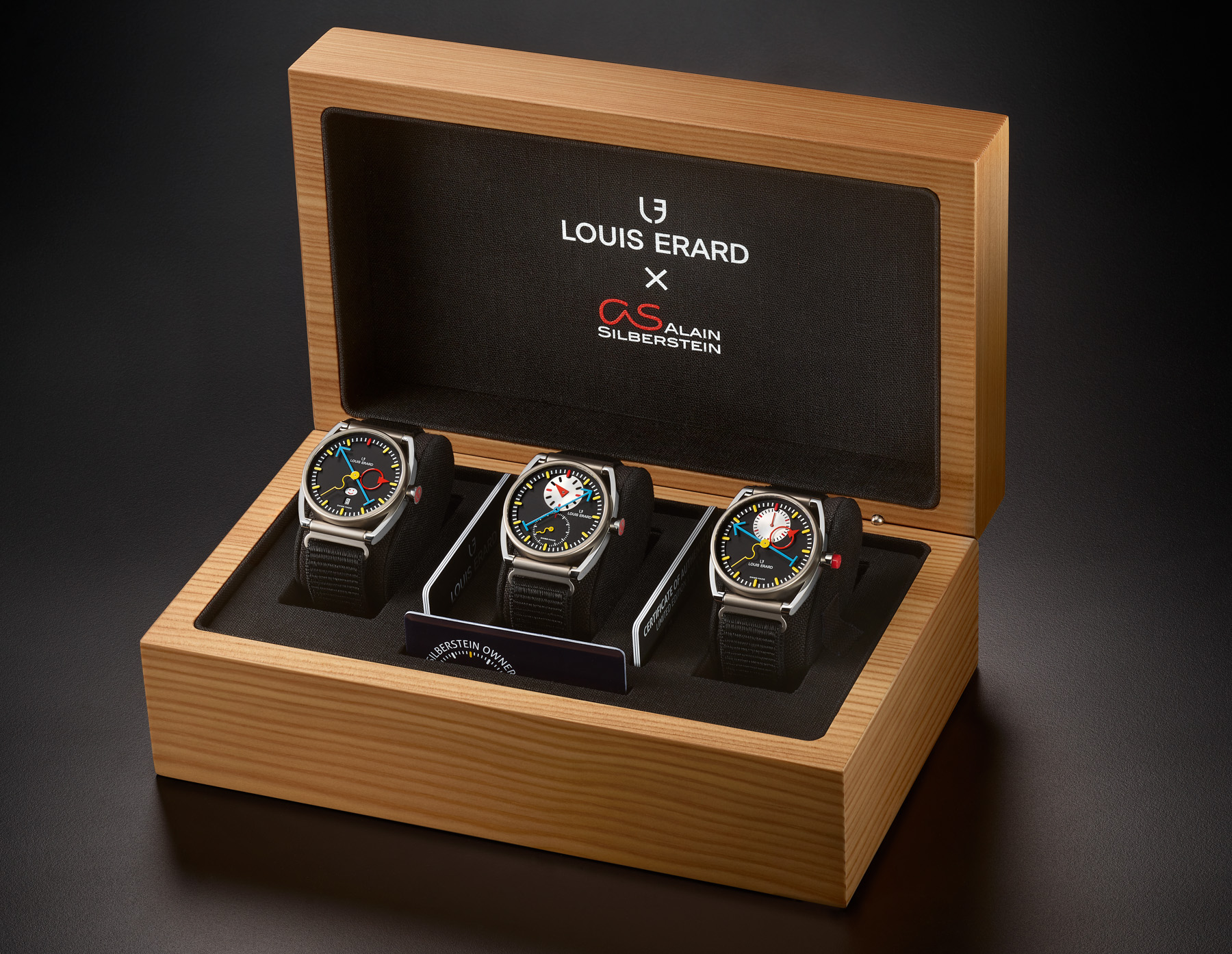