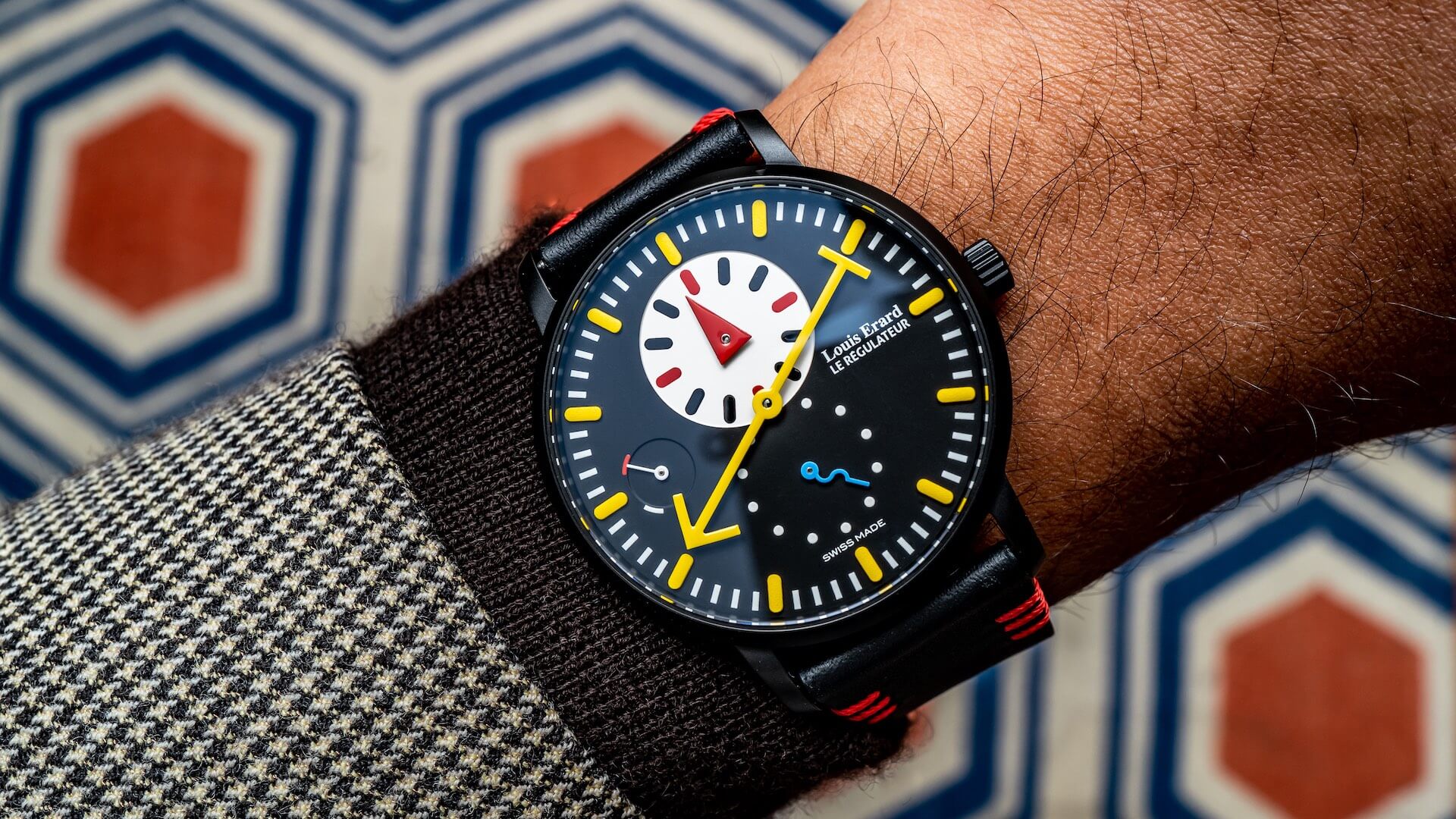 Louis Erard and Alain Silberstein’s collaboration on this Excellence Regulator was welcome news last year for anyone who is a longtime fan of the iconic designer/watchmaker as well as for new collectors who took a liking to the colorful geometric design housed in a classic regulator. A fun piece that is actually wearable, I’m a big fan of the Excellence Regulator in large part because it nails the balance between expressiveness and restraint. Louis Erard and Alain Silberstein avoid falling into the “novelty trap” and have created a limited edition piece that distills the designer’s best style in a thin case with modern finishes and refinement. I spent time with the black PVD stainless steel model with black dial, but there is also a stainless steel case model with white dial. Each is limited to just 178 pieces. 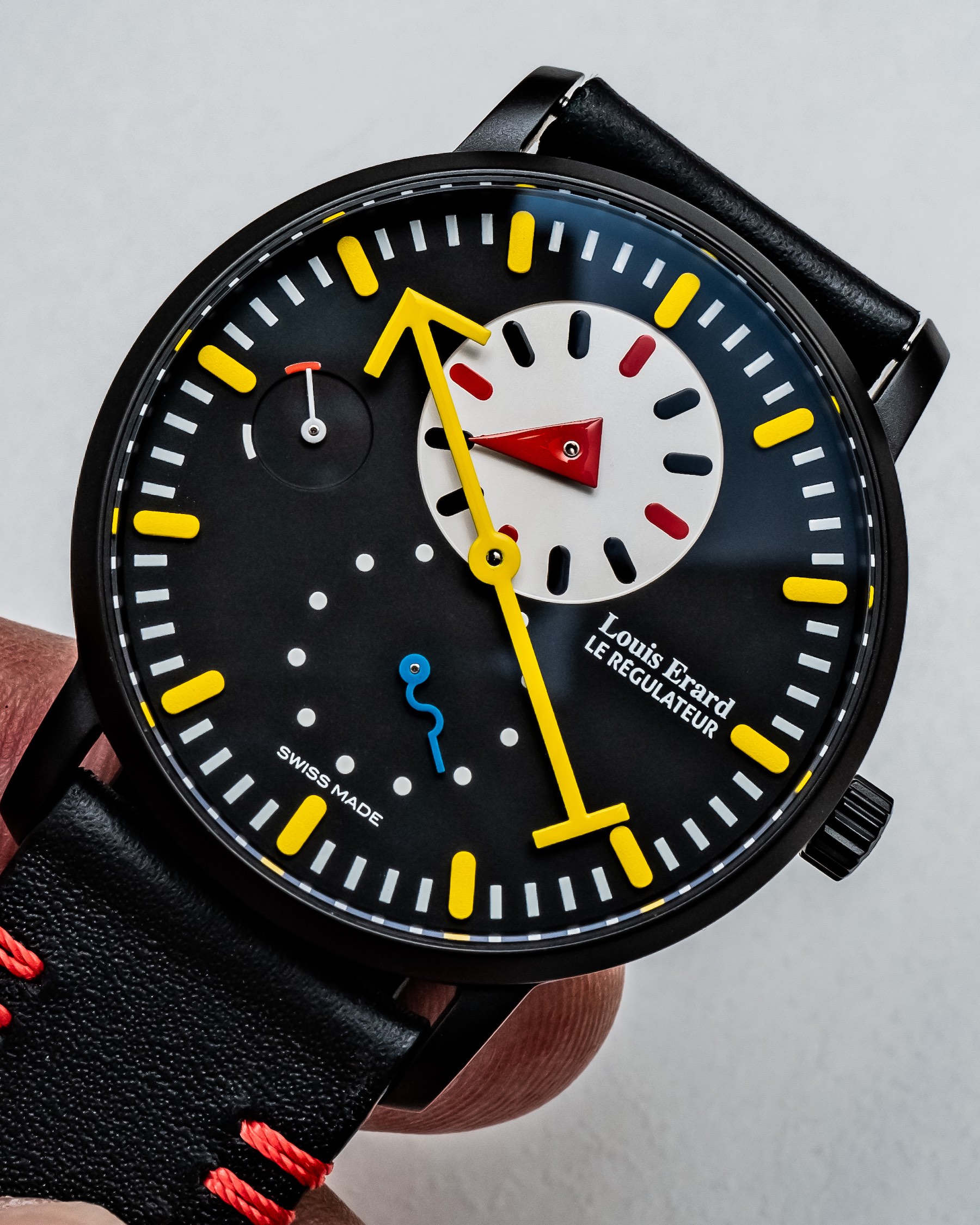 Silberstein was an architect and interior designer when he decided to start his eponymous watch brand in 1988. Fun, playful, and often way over the top, Silberstein’s brand created his immediately recognizable designs through 2012. Sadly, finding collectors who appreciated this particular brand of whimsical and colorful design at not inexpensive prices was quite difficult. In fact, I’d venture to say it’s still quite difficult.

PS If you’re not too familiar with Alain Silberstein (the brand), this huge Artcurial auction from a couple of years ago has the 142 watches sold with images, descriptions (though they may only be in French…), and final sale prices. 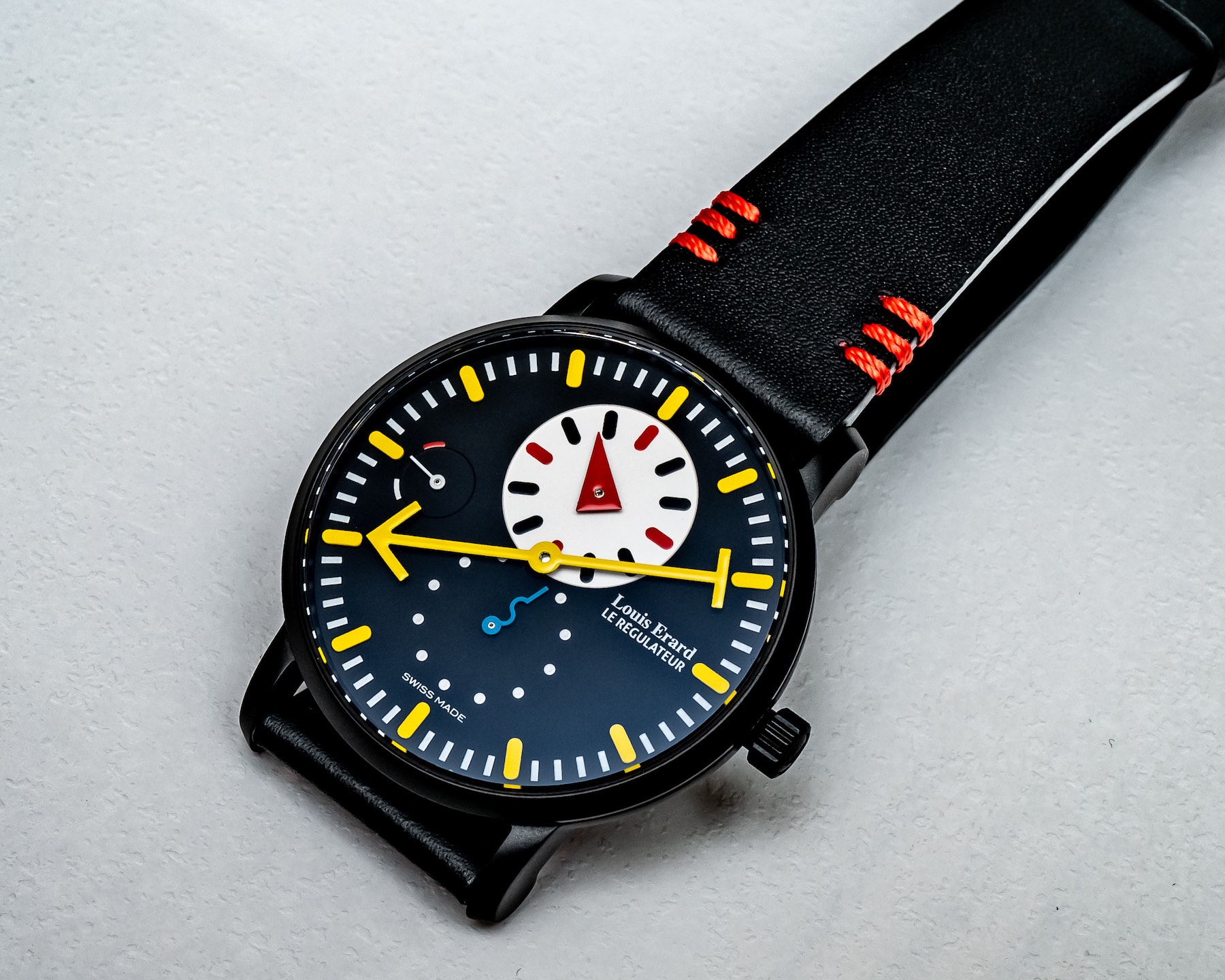 Yes, Silberstein’s designs have clear Bauhaus roots with Kandinsky’s abstract art being a clear point of inspiration. I also see a lot of László Moholy-Nagy, the Hungarian painter who was foundational to the Bauhaus school, particularly with the pieces that highlight his fascination with the technology of the time. The works Perpe, The Great Wheel, The Bicyclist, and Y (all from between 1920-1921) feature abstract geometric shapes but also depictions of wheels as symbols of dynamic movement. These are particularly apposite works to discuss especially when we consider that Silberstein refers to his watch designs as “kinetic art.” 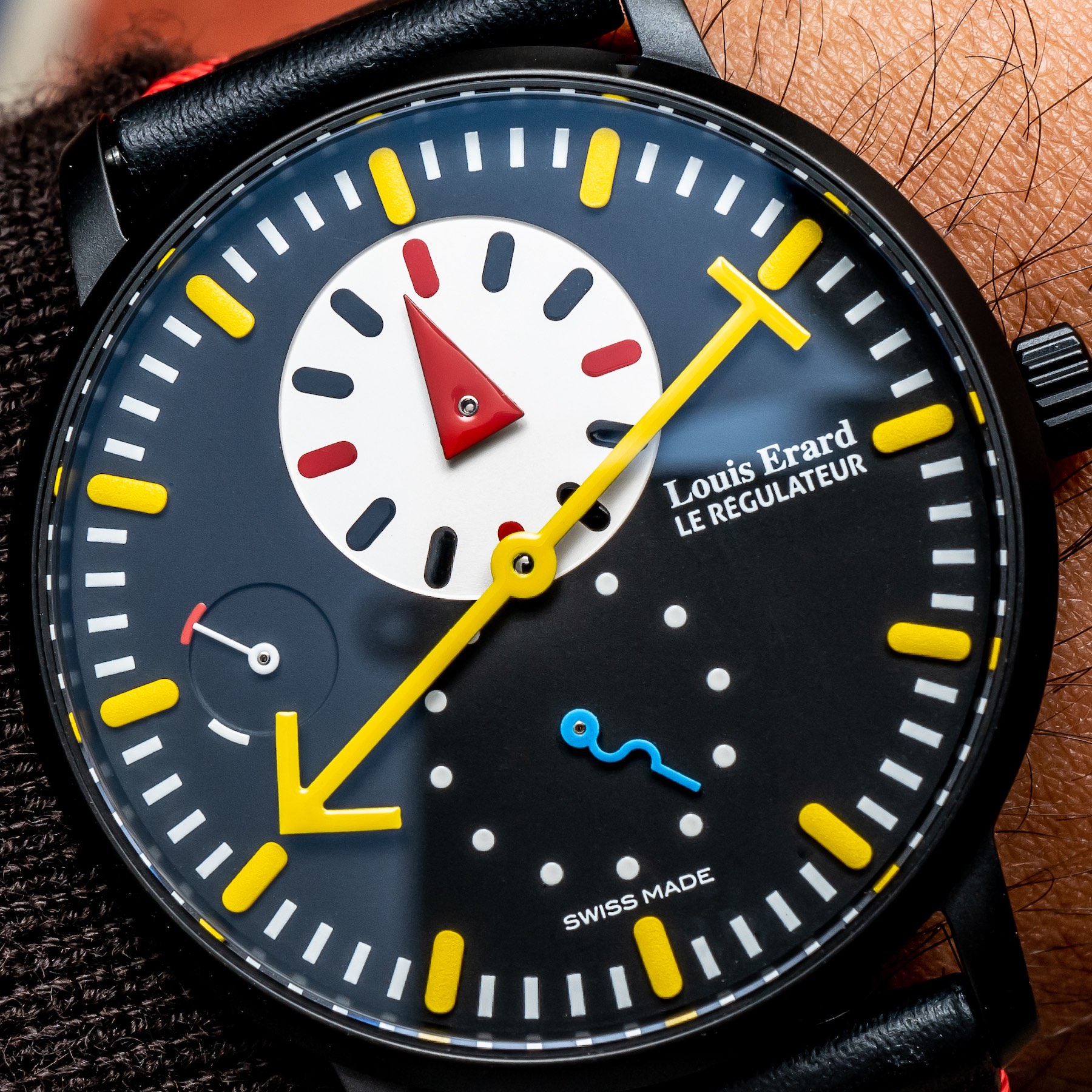 There is also a connection to Kazimir Malevich who founded the Suprematism movement in the early 1900s, as well as others in this school such as El Lissitzky. This Russian movement focused on geometric shapes, though bright, loud colors were not a defining characteristic. This is where I see the influence of Joan Miró as well as the great De Stijl artists like Mondrian and Vilmos Huszár. Finally, Keith Haring comes to mind as well.

And, while there is no direct connection to be made, I really believe that the work of animation studio Klasky Csupo in the 1990s was adhering to the same colorful, geometric design ethos that drove Silberstein. 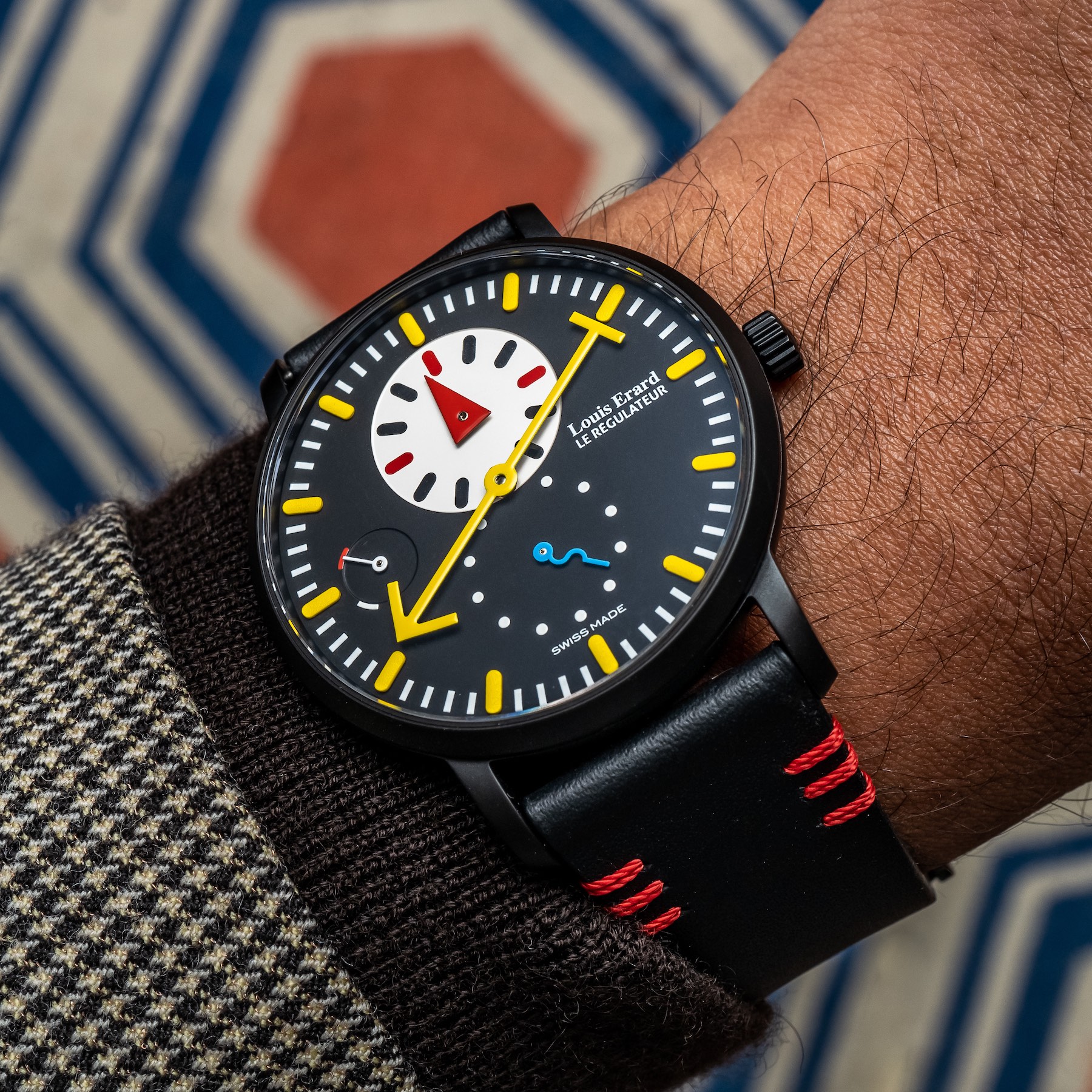 Regulator clocks were developed in the 18th century as a way to keep time as accurately as possible by having a central minutes hand with hours and seconds hands shown on sub-dials. The regulator layout is still commonly, though not frequently, seen in brand collections from Patek Philippe, Laurent Ferrier, A. Lange & Söhne, and Vacheron Constantin to Oris and Tissot.

Two brands that are inextricably associated with the regulator are Chronoswiss and Louis Erard, albeit occupying different price categories, as I believe Chronoswiss’ entry point is about $4,000. Louis Erard doesn’t exclusively produce regulators (neither of these brands does, but they’ve both come to be indelibly characterized by them) but the Excellence collection has benefitted the brand greatly by offering something few others do in the ~$2,500-$3,000 range. Having handled my share of Louis Erard pieces over the years, they do excel in quality and attention to detail. Even if the market for someone seeking an affordable regulator to add to their collection is self-selecting, I suspect I was one of many, many people lusting after the Alain Silberstein collaboration when it was announced late last year. 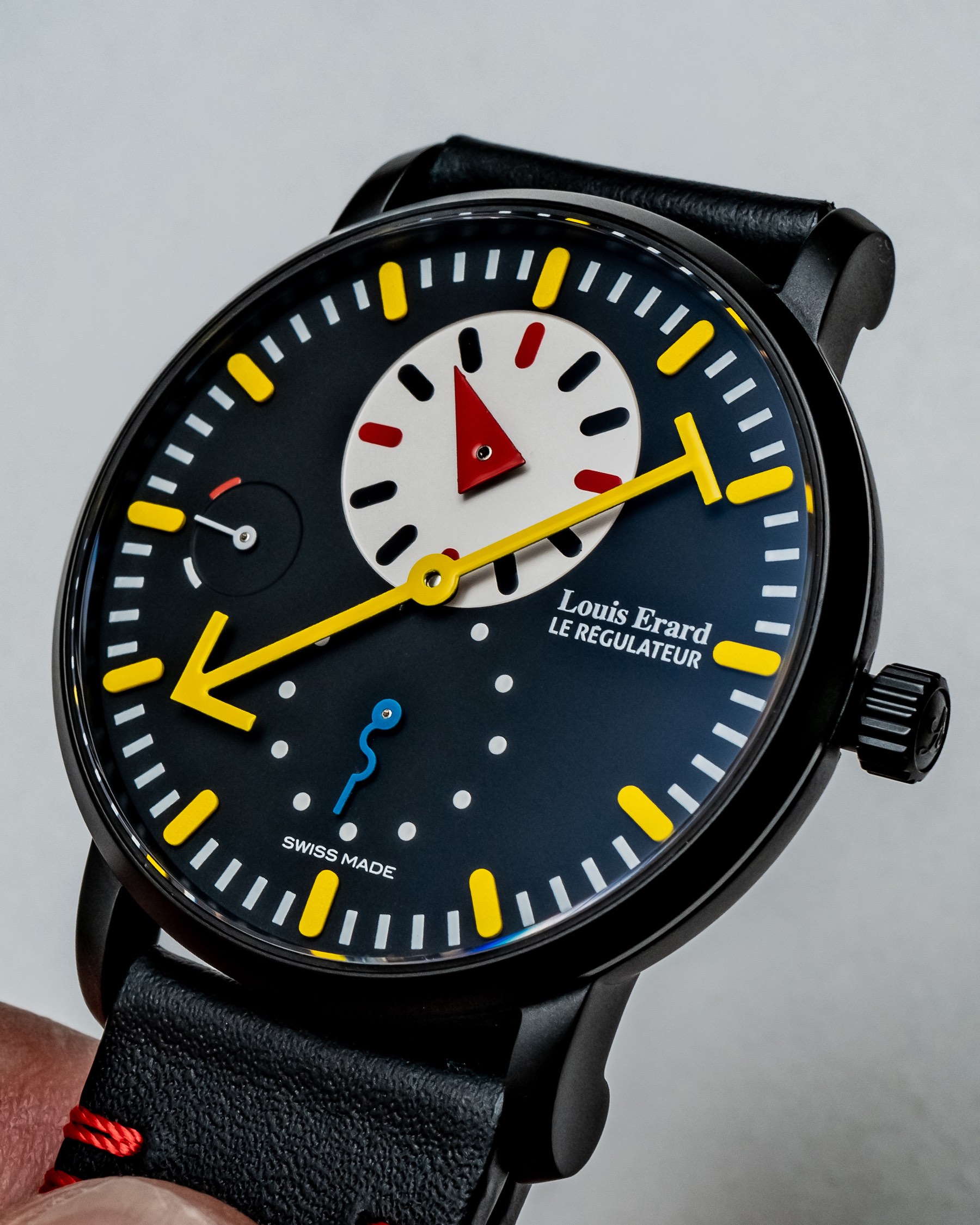 Ironically, this collaboration with Louis Erard is the first regulator designed by Alain Silberstein. I say it’s ironic because the fragmented layout of the dial on a regulator is ideally suited for Silberstein’s colorful, geometric designs. Looking at some of Silberstein’s previous designs, there aren’t too many examples of time-only pieces that for me hit the “just right” spot where his quirkiness matches the medium (in this case, watch dials). Time-only models like the Rondo Nomade or Klub Medio leave something to be desired while something like chronograph Krono pieces shine.

With the regulator, Silberstein was able to create a time-only watch that let him create a deconstructed dial that is actually pretty legible, even with an offbeat layout and Silberstein’s eclectic design language. I chose to review the black dial model since it’s the one I prefer, though it was very close (let’s say 52-48) when compared to the white dial. I think the yellow seconds squiggle on the white dial strains my eye a little and that was the deciding factor. 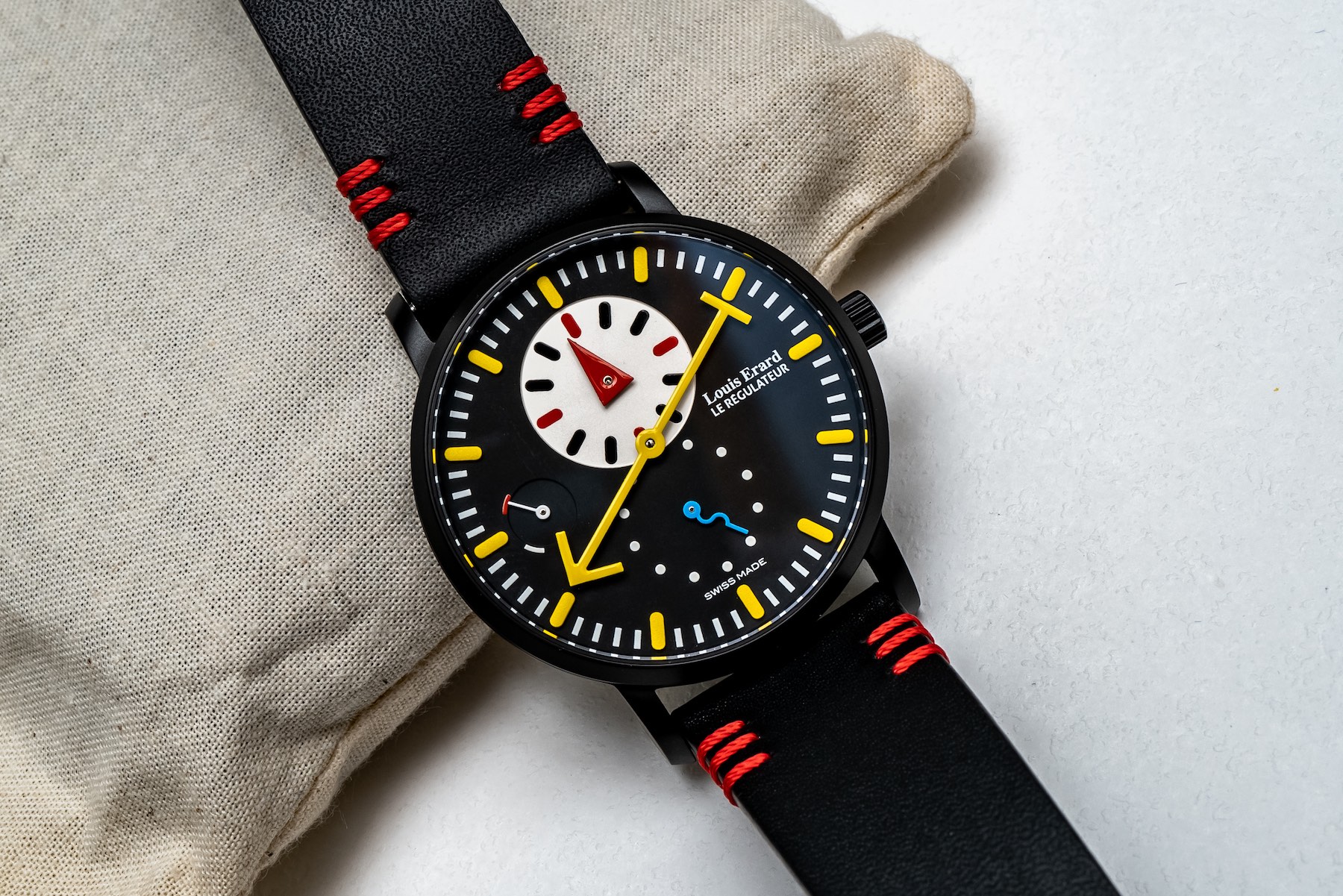 The red triangular hour hand, squiggly blue seconds hand, and the clean diameter of a yellow arrow minutes hand are all quirky but also do their job legibly and intelligibly. This oftentimes can’t be said with more traditionally designed dials that take design heritage seriously, while spectacularly failing at their singular purpose (due to general illegibility, poor contrast against the dial, over-polishing, short hand length, or a bevy of other reasons). 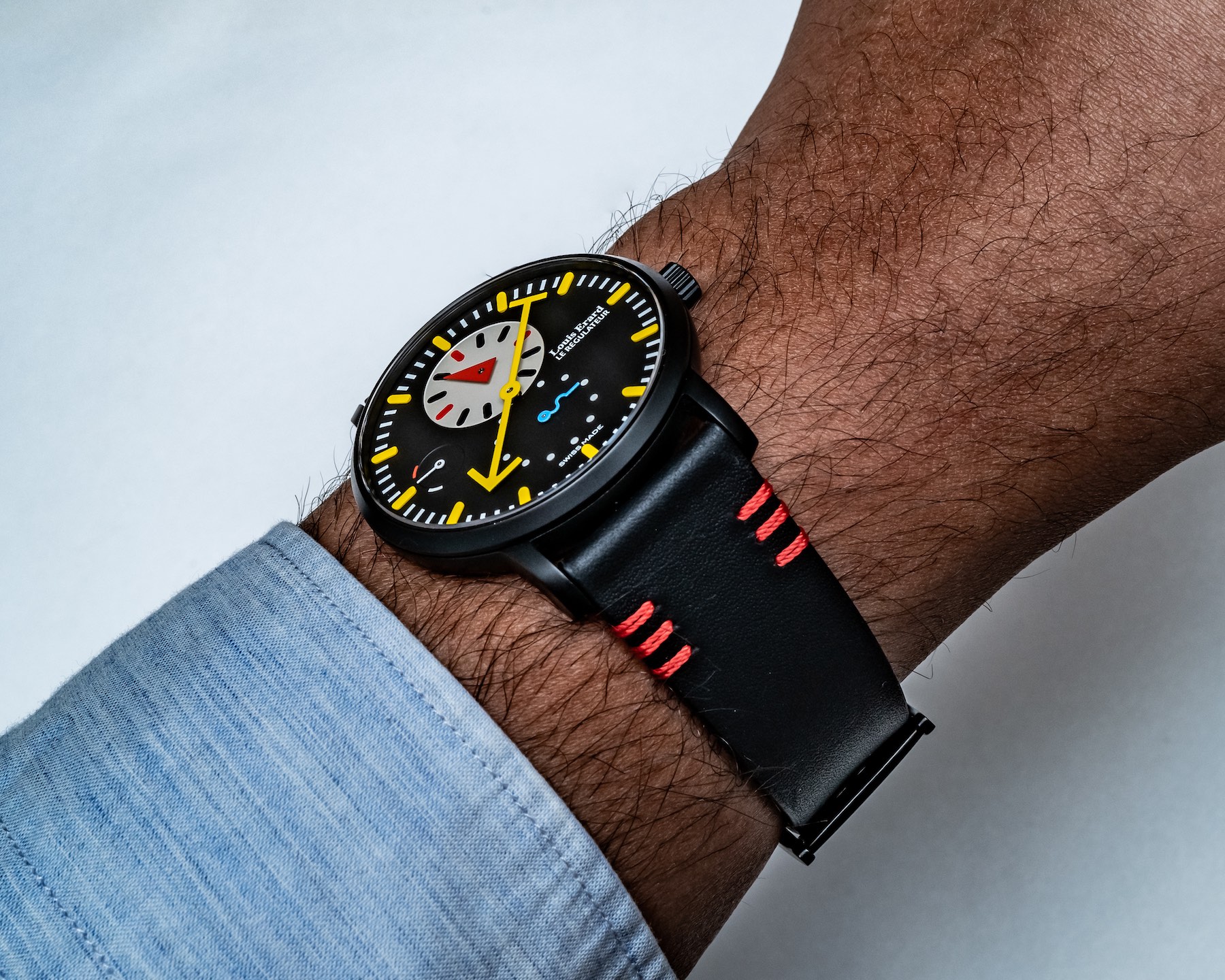 I think the dial has just enough going to still be fun each time I look down at it — I smile nearly each time, which does not happen frequently, as anyone who knows me can attest — while avoiding being too much of a novelty. In fact, I think the Louis Erard x Alain Silberstein Excellence Regulator could very easily be a regular wear that’s in rotation alongside more traditional pieces. The same thing can’t be said for, let’s say, something like the (now-defunct) Romain Jerome Super Mario Bros. watch. One is both fun and wearable, the other is a madcap novelty meant for occasional wear. 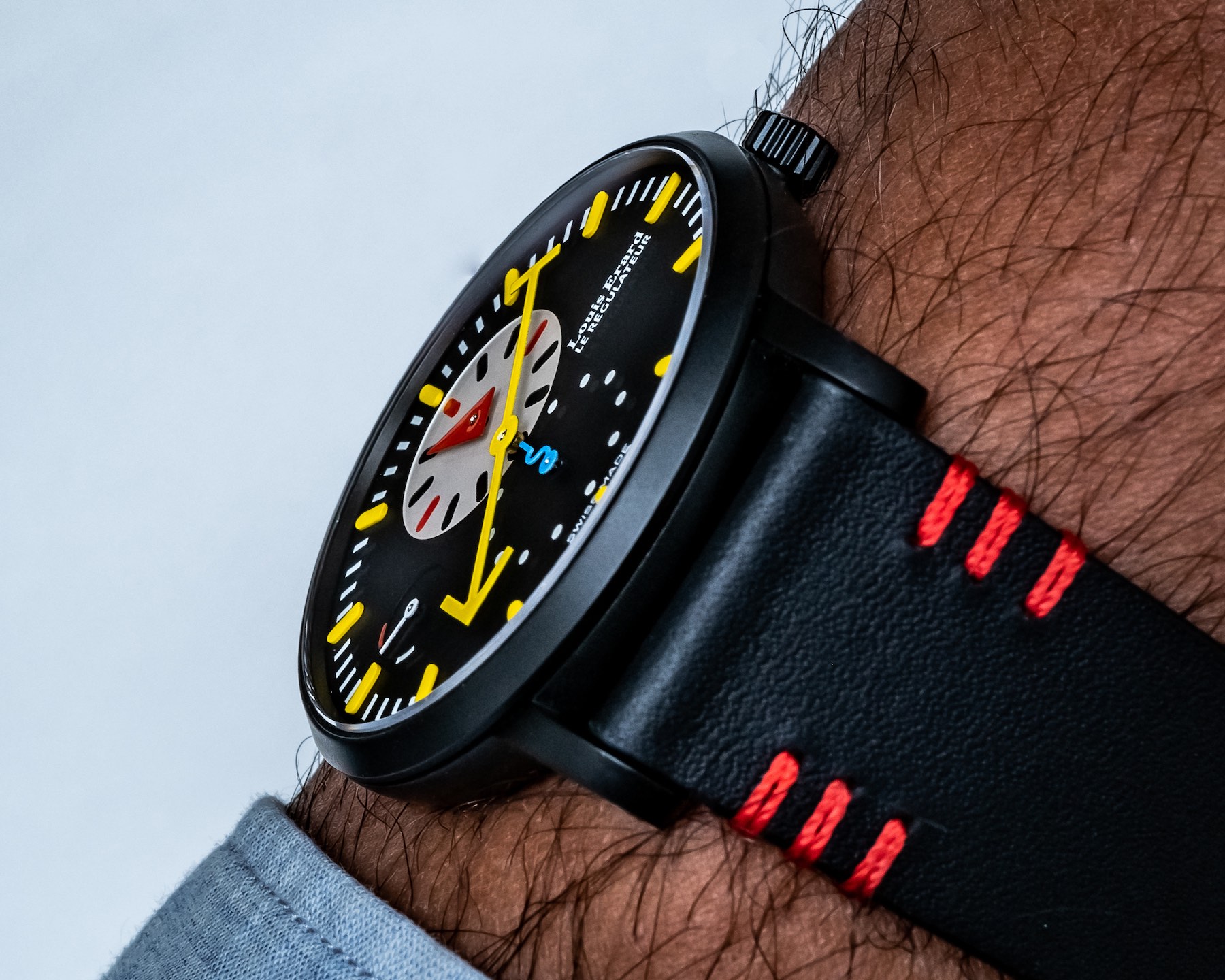 Of course, the wearability doesn’t just have to do with the tastefully zany dial but the case, as well. Unlike many of Silberstein’s own creations and the aforementioned Romain Jerome, the Louis Erard collaboration is conservatively sized and designed. This is crucial in the success of the watch since a loud case design would firmly plant it into the novelty category. 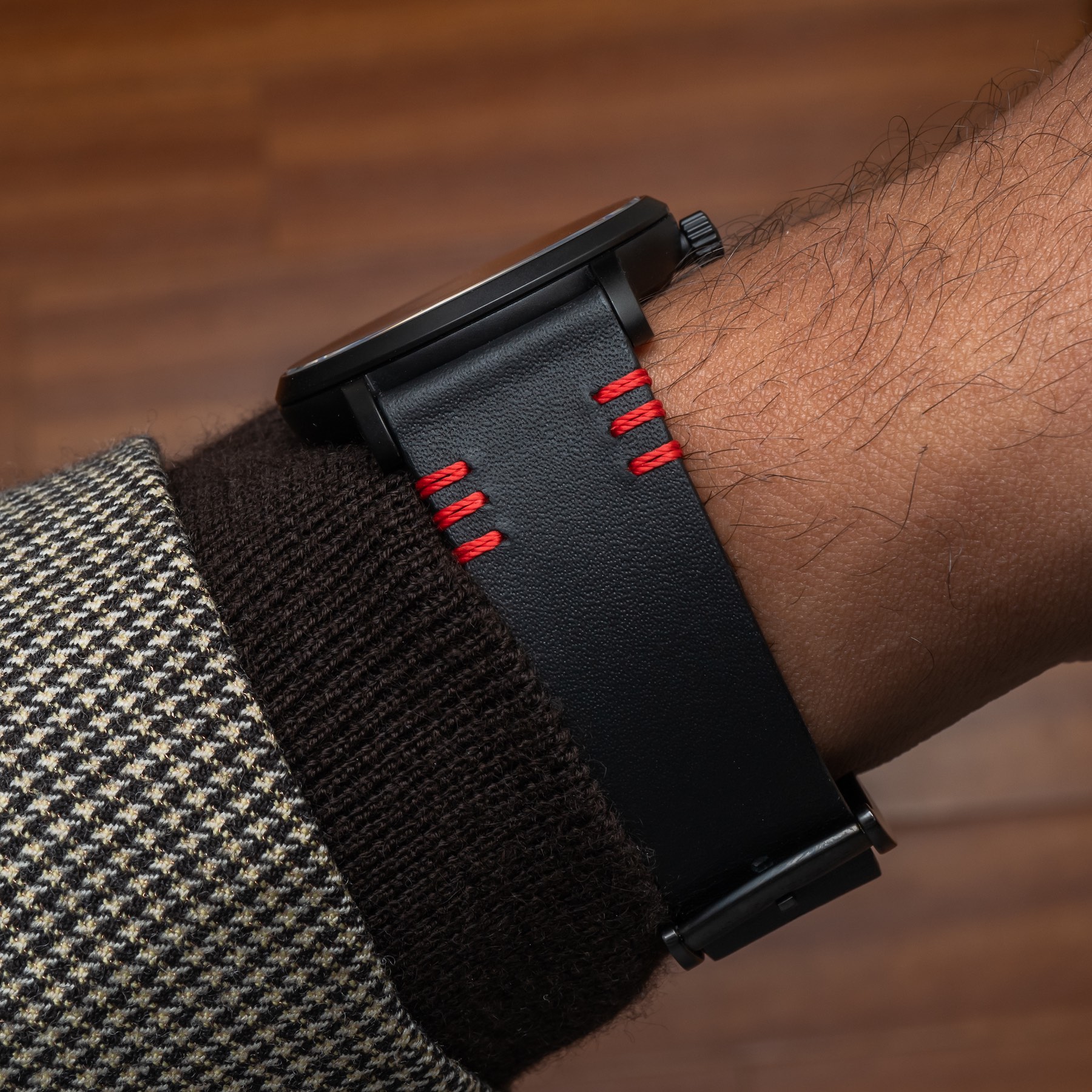 Rather, we get a highly versatile and wearable watch that measures 40mm wide and 8mm thick, with a lug-to-lug height of exactly 46mm (water resistance is 50M). Hell, forget a suit, if there’s an occasion that I have to wear a tuxedo (with a mask, these days), I’d consider pairing it with this black model. I know there are many readers who wouldn’t be caught dead in that pairing, but I’m already grinning thinking about it. While I actually find the habit of “wacky socks/tie” to be a bit tired, I find that boldly styled/colorful eyeglass frames or a watch like this one can be the most thoughtful and effective ways of adding a little bit of self-expression to a buttoned-up environment. 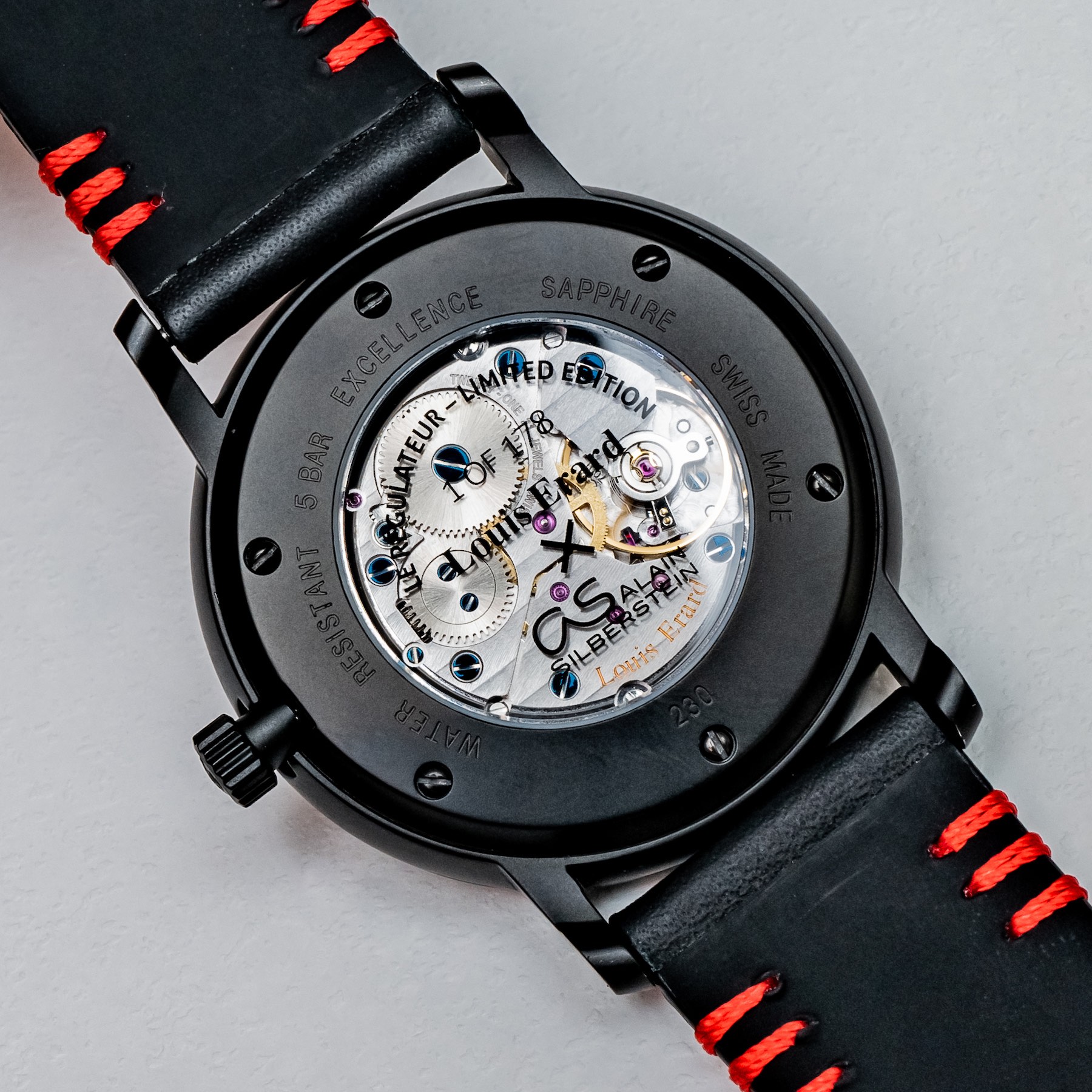 At 9 o’clock, you can see the power reserve indicator, which helps round out the dial design while letting you know how much power the manually winding watch has left. Turn the case over and you’ll first notice the only Alain Silberstein branding on the piece, and I think most would agree that this was a much better call than having it forced onto the dial. You also get a view of the ETA Peseux 7001 with Louis Erard RE9 complication movement. Personally, I’d probably prefer an enclosed case back that would further act as a canvas for Silberstein’s designs but that’s just me building castles in the air. 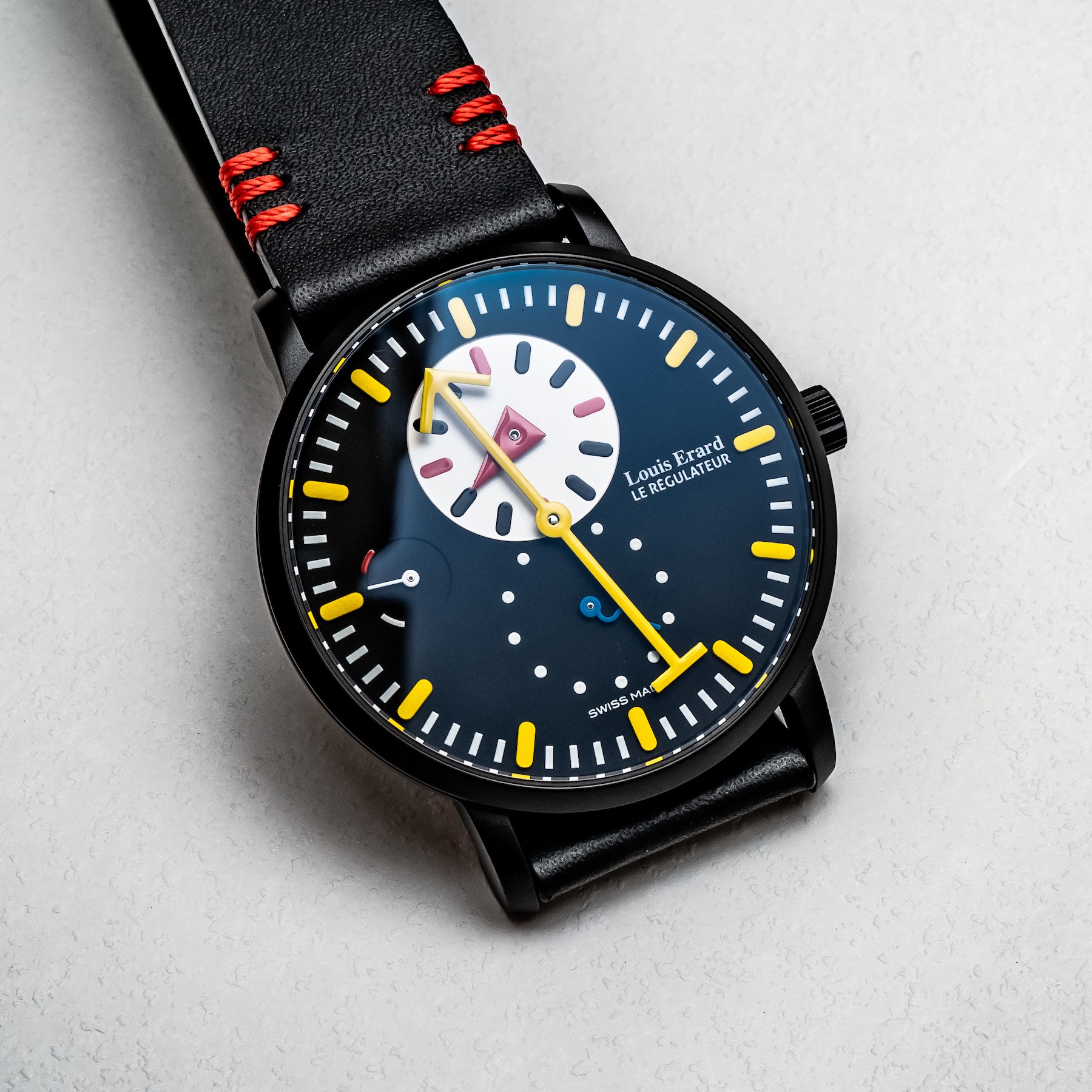 The base 7001 operates at 21,600 vph and has a 42-hour power reserve, with the RE9 module adds the regulator display and power reserve indicator. Fortunately, the module does not add much thickness overall, which would be a huge bummer, as I have come to find the slenderness of the 8mm case an integral part of why I enjoy the watch so much. 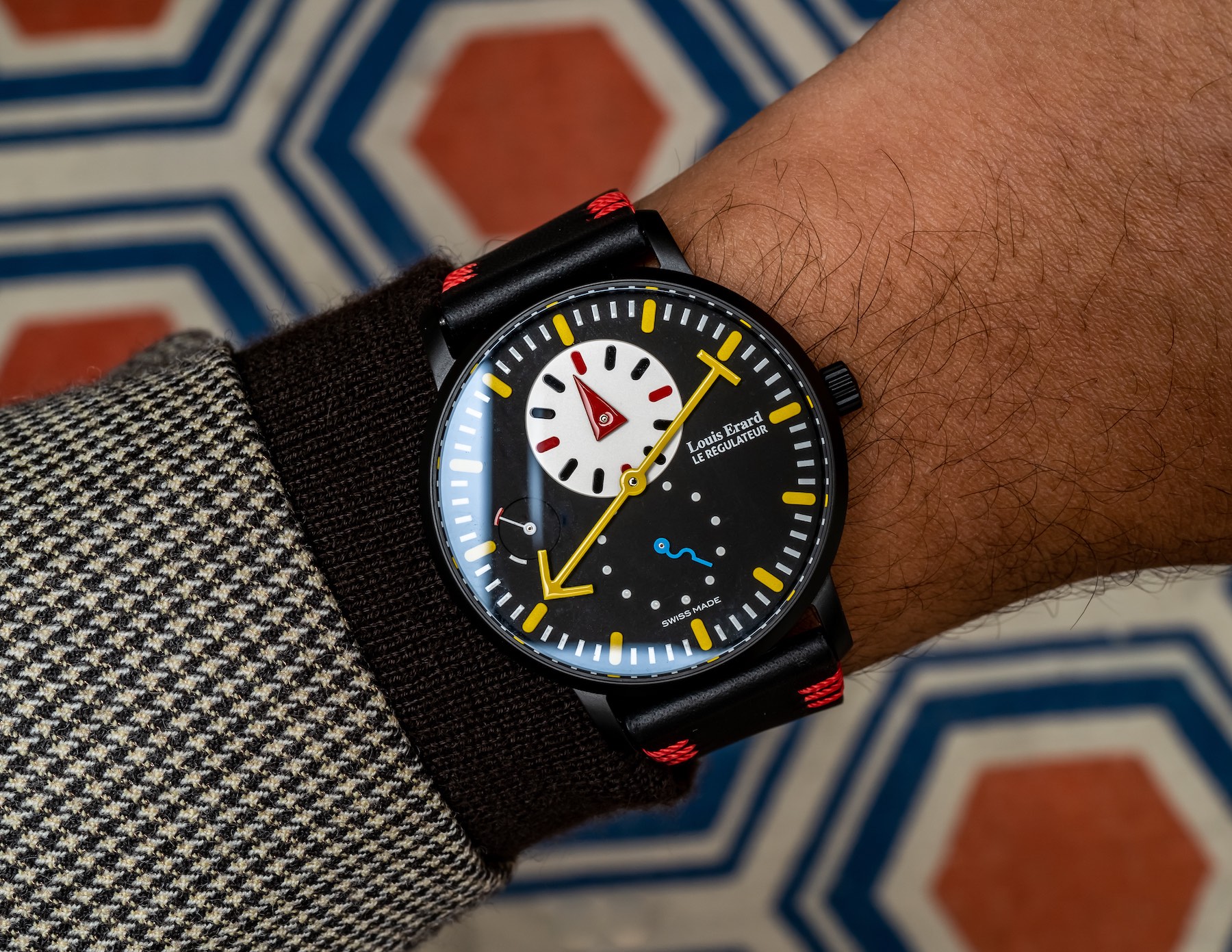 By this point in the article, I’ve made it clear how much I enjoy the Louis Erard x Alain Silberstein Excellence Regulator. This watch is a perfectly conceived and executed work of whimsical watchmaking from one of the truly great original minds in watch design. Of course, it will not appeal to wide swaths of the general public, but that really means nothing when it comes to appreciating the product in the metal. Plus, there are only 178 pieces in each of the two variants being produced. Price for the Louis Erard x Alain Silberstein Excellence Regulator is 2,800 CHF in stainless steel with white dial and 2,900 CHF in black PVD steel. You can learn more at louiserard.com.