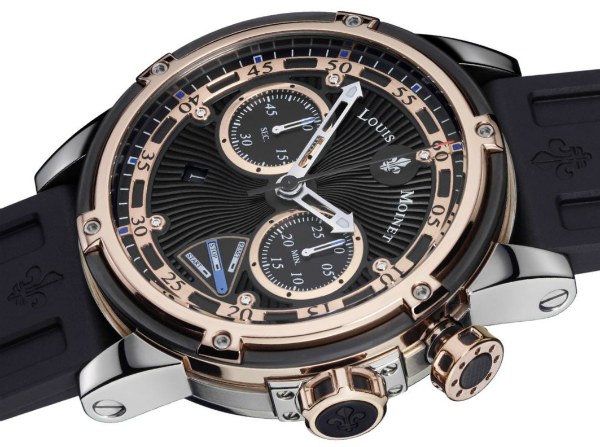 More on the steampunk front! I am happy that this trend isn’t waning away. Entry-level to super high-end watch makers are still dishing out pieces that look like retro futuristic artifacts. Perhaps not in the volume we would like, but we still get some good stuff. Louis Moinet has been doing steampunk Jules Verne homage watches for a few years. The newest one is this Jules Verne Instrument III timepiece.

The Jules Verne I & II watches were similar to one another and I did a hands-on review of one of them here. The III is actually supposed to be less expensive – by about half as much I think. I still like the Jules Verne Instrument I & II watches a lot, but the III adds a new flavor to the mix and is more reminiscent of other Louis Moinet timepieces. I further believe that it will be about half the cost of the other pieces. 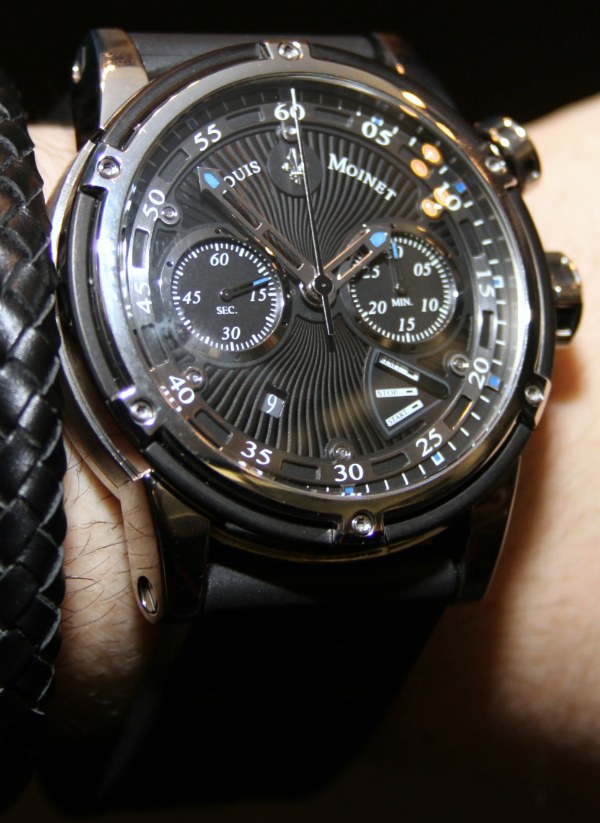 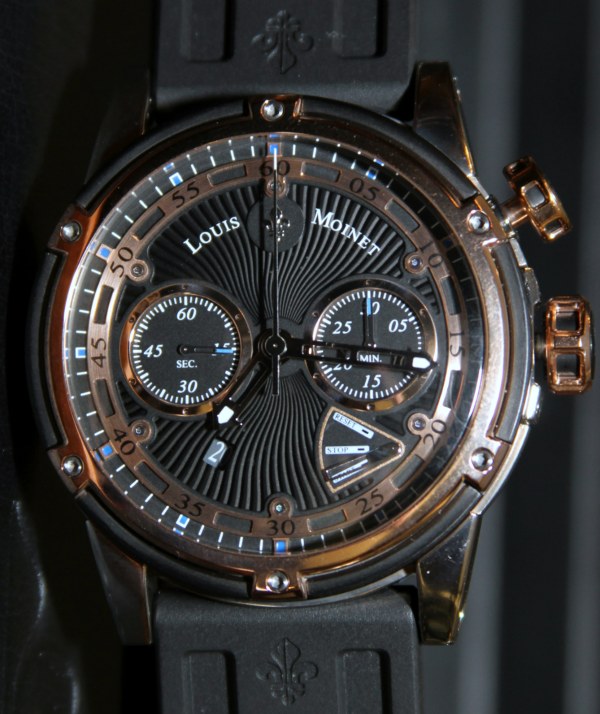 All versions of the Jules Verne Instrument III watch will be limited editions of 365 pieces. The case is 45.5mm wide and 16.5mm tall with wide 24mm spaced lugs. The case will come in steel, titanium, or a version with titanium and 18k rose gold. The bezel is cool and the watch looks nice on the wrist, but I would have liked for it to be a bit more complicated in construction more akin to the brand’s other pieces. Though I do like the complicated look of the crown and monopusher for the chronograph.

The design of the watch is said to be based on Jules Verne’s 20,000 Leagues Under the Sea. I can totally see Captain Nemo wearing this watch, but aside from that I don’t see too many nautical elements in much of the design. There are the submarine instrument style hands sure, as well as the chadburn style function selector on the dial. This latter element is something that Louis Moinet developed for the watch. It tells you what the chronograph is doing. Which is sort of cool given that it is a monopusher. There is also the date on the dial. 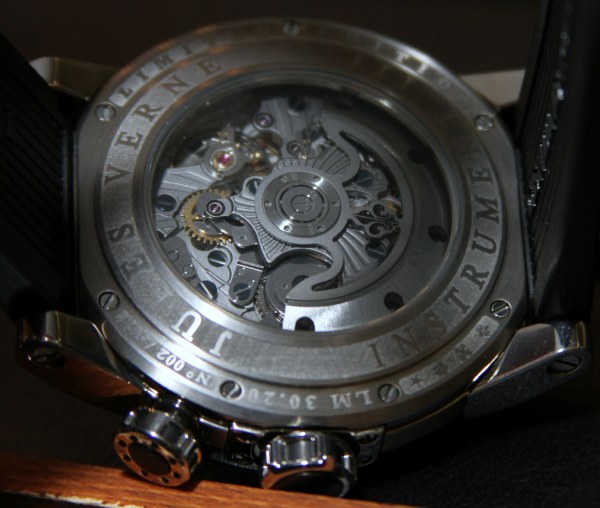 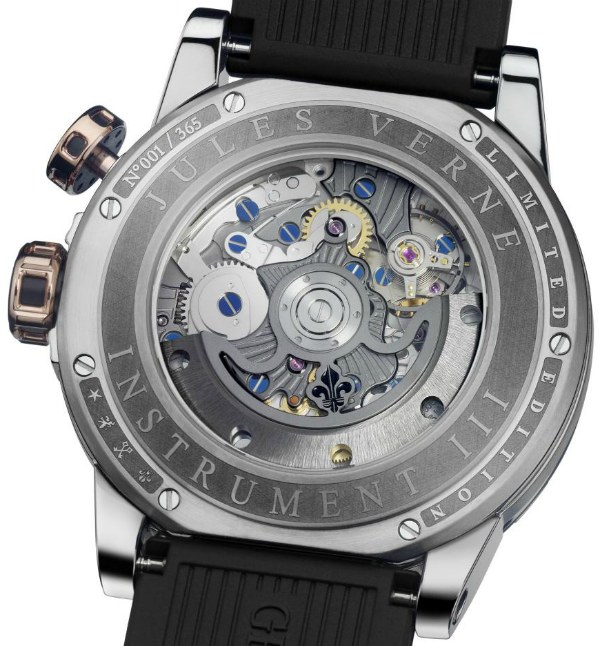 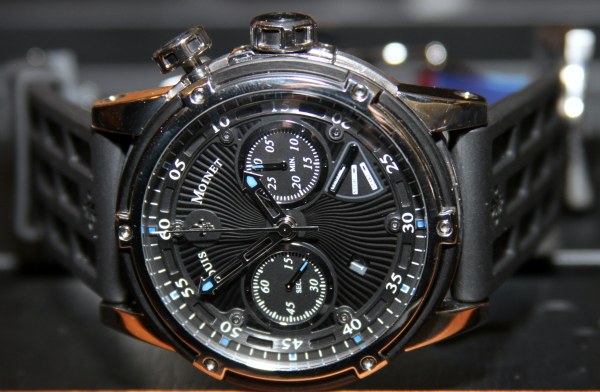 The dial itself is pretty handsome with Louis Moinet’s special wiggly machine engraving. They have a name for it that I forgot. So I will stick with “wiggly sunburst.” A nice and elegant name, just like the Swiss want it, right? The hands on the dial could be a bit longer, and personally I would have ditched the skeletonization in favor of more lume.

Using a base Swiss ETA 7750 automatic chronograph, Louis Moinet transforms it into their caliber LM30 automatic movement. There is a lot of work that went into the movement including new bridges, a special custom rotor, and lots of other little details. As I mentioned, the chronograph was turned into a monopusher chrono, with the chadburn style function selector on the dial. This isn’t the first time I have seen something like this – and it isn’t really a new function, but it is cool to have. I further like the fonts used on the dial. 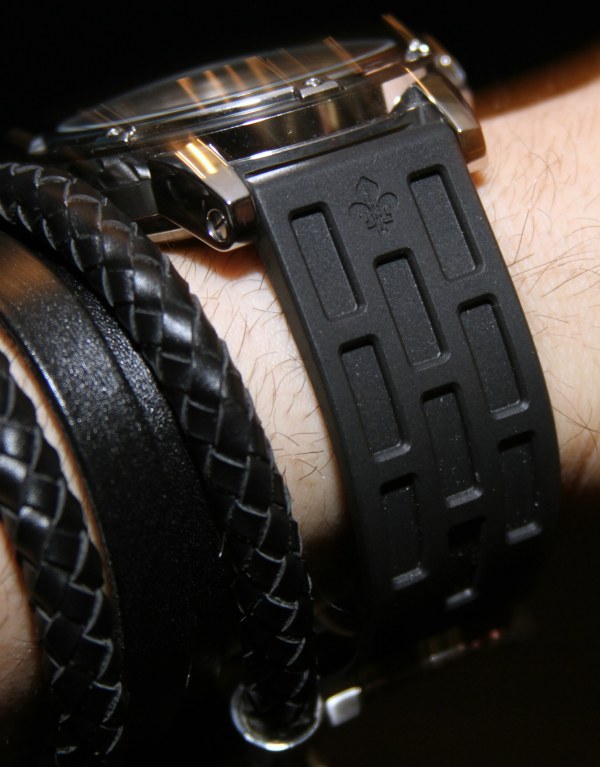 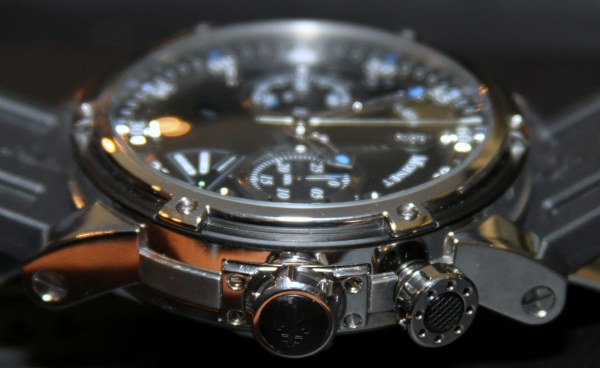 For what it is, I feel that the Louis Moinet Jules Verne Instrument III watch is a solid timepiece. Price is gonna be around $10,000 (under) I believe. It certainly fits in the brand’s character and is rather steampunky. I would suggest a few improvements for the piece however. First of all the bezel is nice, but I would have liked the parts to be milled a bit more crisply. I saw pre-production pieces so the final models might improve upon this. I would also like to see better AR coating on the crystal. Louis Moinet watches tend to feature richly curved sapphire crystals and I think a better AR application would highly improve dial legibility given the amount of glare you get. Brands like Girard-Perregaux get away with some amazingly high-quality curved crystals that brands can use as quality bars. Last, I suggested to them that the overall presentation would benefit from a better rubber strap design. The rubber itself is fine, but I see it as something that could benefit from a few more textures. I joked with them that the inner strap and outer strap should be juxtaposed. The strap just doesn’t quite match the splendor of the case. I would personally attach a case-fitted strap that better suits the overall watch concept better. Look for this cool Jules Verne Instrument III (# 3) watch from Louis Moinet soon.