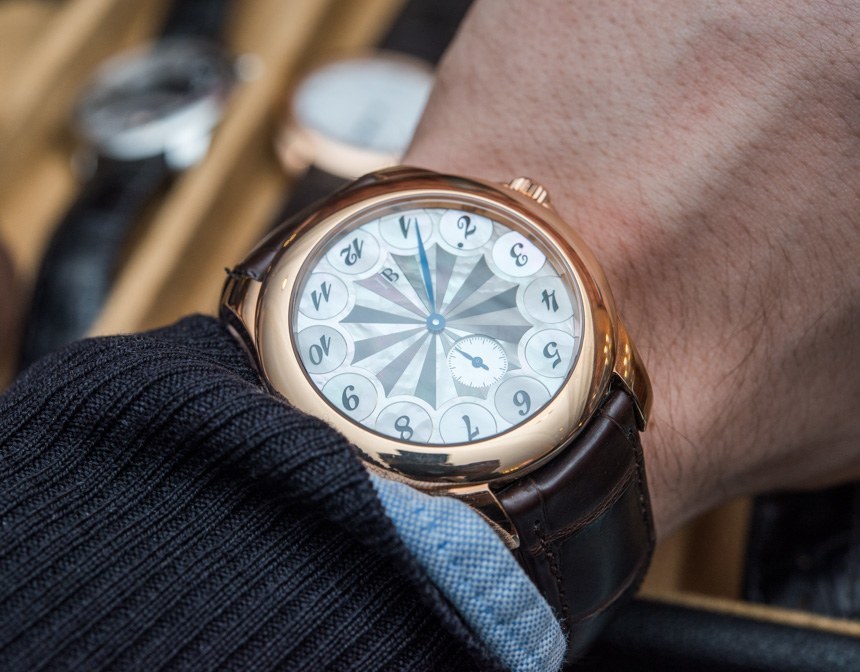 They say you should never meet your heroes, and in regards to the often eccentric characters of horology, the adage may be wiser still. But when it comes to the man behind the Ludovic Ballouard Upside Down watch, it’s worth throwing caution to the wind. We met Ludovic a few weeks ago and went hands-on with the top-of-the-range model that sports a mother of pearl dial, making it a stylish watch that grabs your attention – only to later reveal that its beauty is more than skin deep. 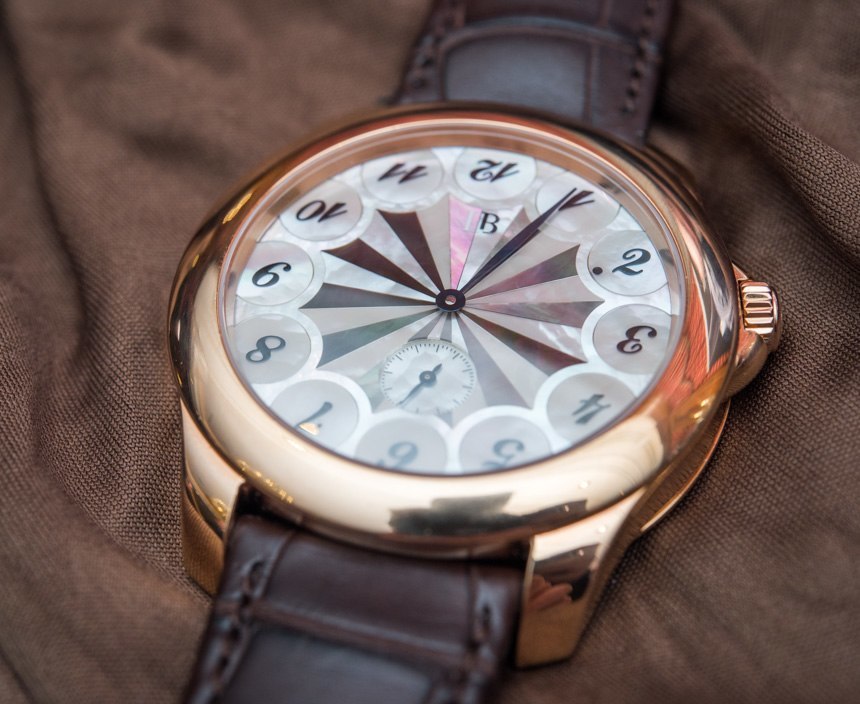 The crucial quirk of this watch is a jump-hour mechanism that displays the hours on individual rotating discs. The correct hour is the right way up, while the other eleven rest in the default upside down position. When the minute hand (a single, elegant indicator of blued steel) passes 12 o’clock, the next hour disc rotates to an upright position, while the previous hour indicator snaps back to the default position.

In addition to its orientation, the active hour disc reveals a dot on the edge of the disc that points towards the centre of the dial. When in the ‘off’ position the dot is hidden by the bezel. The dot is a really neat touch as it immediately draws the eye to the time. Without it, the watch would still be clear because of its minimalism, but the curvaceousness of the Arabic font might delay interpretation. 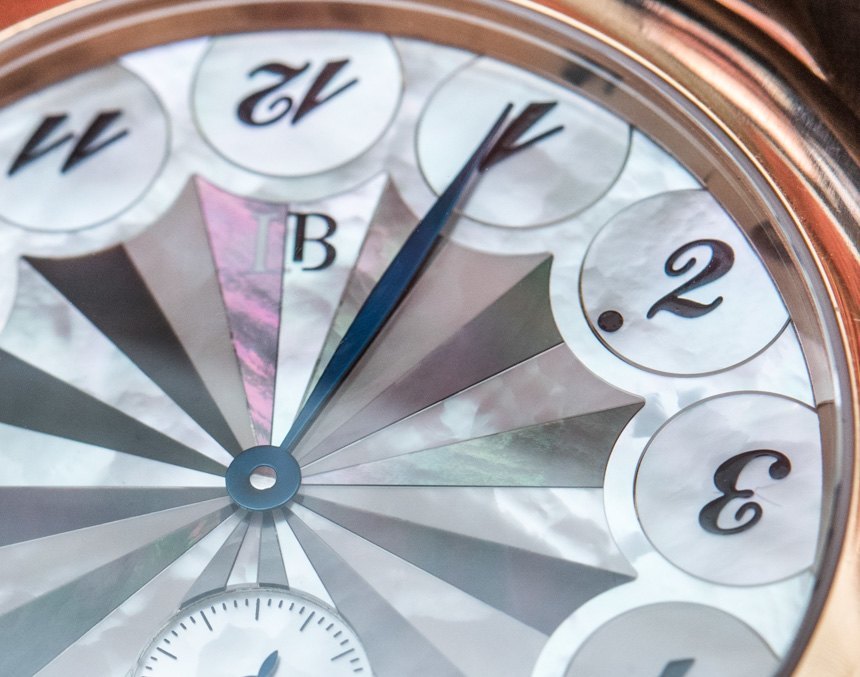 An in-house movement with 228 components and custom complication aside, the thing that’s really impressive about this particular model is the dial. As a watch maker, I have worked extensively on mother of pearl dials and can attest to their fragility: the slightest imperfection in the natural material can have catastrophic results, especially when the dial is cased up and under tension. According to the official website, the dial of the Ludovic Ballouard Upside Down contains a staggering 55 separate pieces of mother of pearl, carefully assembled by hand. 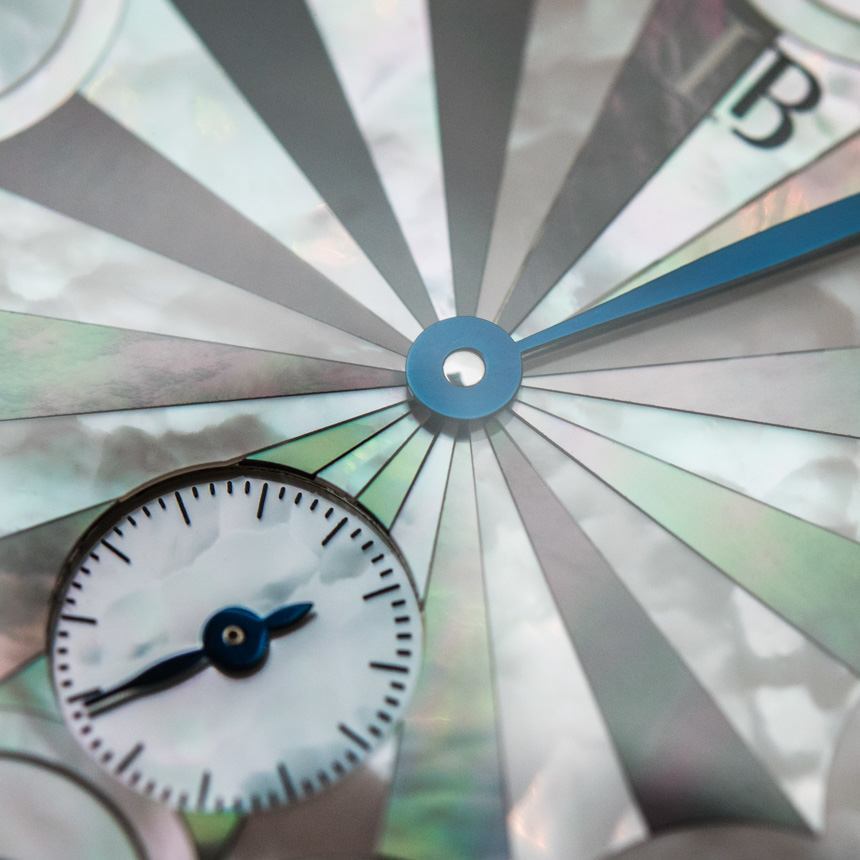 Speaking with the enigmatic Ballouard himself is an intimidating prospect. He is a taciturn intellectual, whose ponytail, round glasses, and artistically sculpted goatee are at odds with his powerful build. His assistant, who does most of the talking for the talented Frenchman, explained to me that hundreds of mother of pearl pieces do not make the grade or shatter during application. The marquetry process, however painstaking, is undeniably worth it. 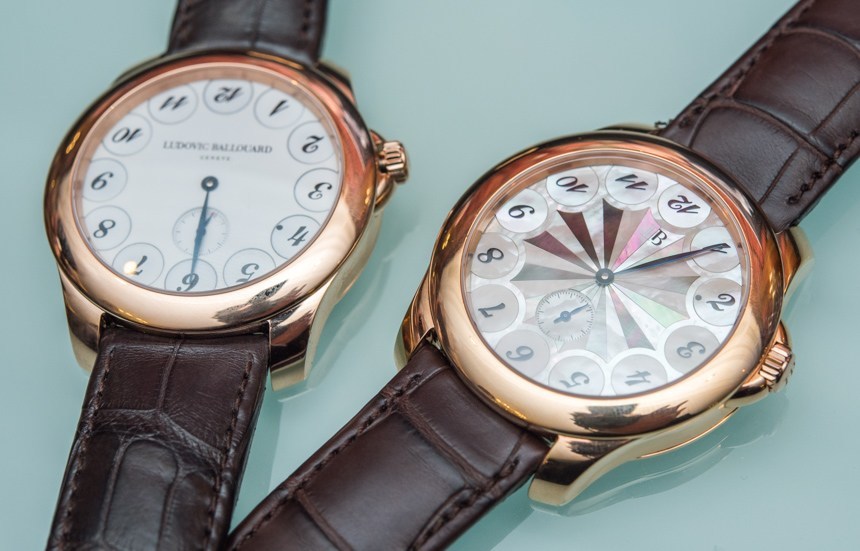 The effect of the alternating grains found in mother of pearl add a great deal of lustre to what would otherwise be a very plain dial. I have no problem with the simplicity of the standard, titanium dial given my fondness for the brilliantly executed complication, but the mother of pearl version elevates this watch to a hitherto unattained aesthetic echelon. A static dial of such intricacy is reason enough to buy a watch, but a dial that blends involution with a dynamic display is next-level stuff. 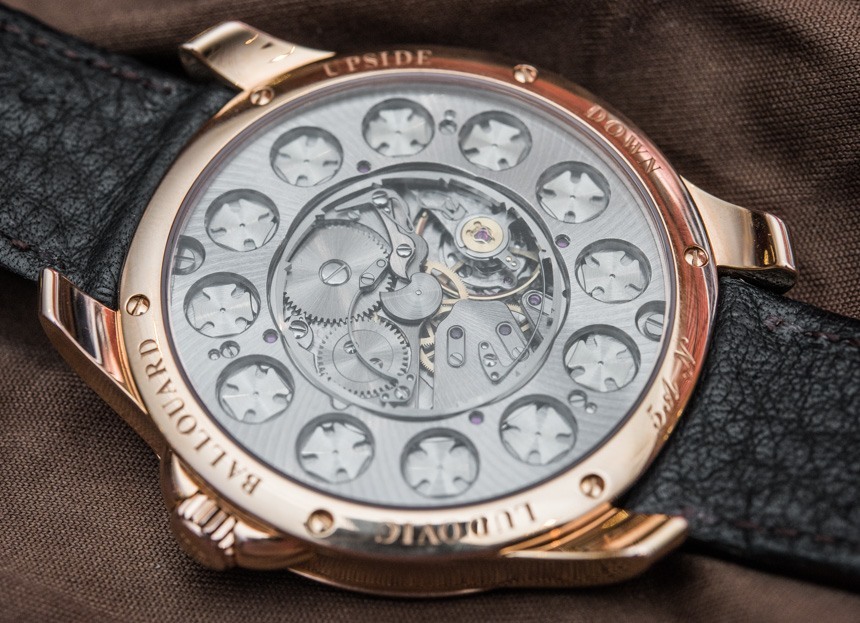 So how does this movement work, and why is it worth getting excited about? It’s a funny-looking calibre, displayed through an edge-to-edge glass back. It is at once simple and complex. At first glance, there appears to be very little happening. The progress of the central snail cam responsible for the sudden jump between hours is so incremental it cannot be noticed by the naked eye. The finish of the plates is relatively subdued, with Ballouard preferring to let the immediately identifiable design of his B01 movement (which shares its name with the in-house Breitling calibre) do the talking. The twelve Maltese Cross shapes mark the location of the hours on the flip-side. The most fun you will have with this movement is observing its operation when setting the time. But for all this plainness, I love it. From the back, it looks like a beautiful engine; from the front, I would say it is a work of art. 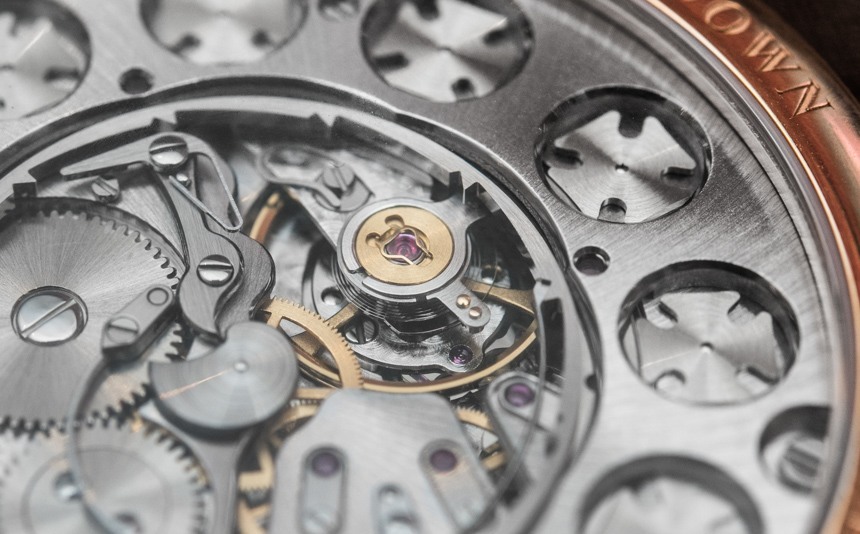 These two worlds collide within a smooth and flowing case design that imbues the watch with dressy elegance. The movement itself would have looked at home in a gritty, futuristic housing were it teamed with a more angular dial (you could imagine the complication sitting well with the philosophy of Urwerk, for example), but the case and the dial together leave us in no doubt as to Ballouard’s personal tastes. His statement is one of choice words delivered in a whisper. The true ‘horophile’ will appreciate the polished case poking out beneath his cuff, with its recognizable crown, signed ‘LB,’ and located at half past two. 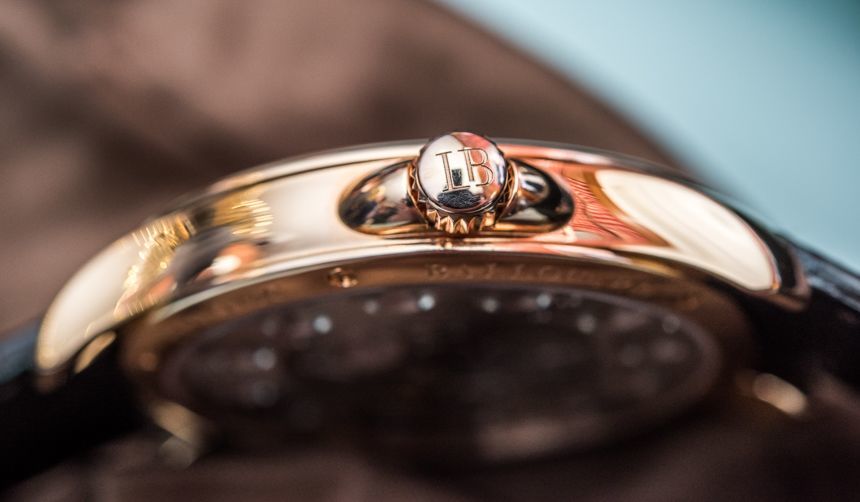 Little touches like the off-set crown and the buckle (a stylised ‘B’ that reputedly fits to the contour of the wrist very sympathetically so as to reduce the stress on the leather band – and which on the picture below belongs to the platinum-cased version) are what make legends out of otherwise so-so timepieces. These nuanced choices give the wearer something else to discuss and obsess over. And they make the watch stand out. 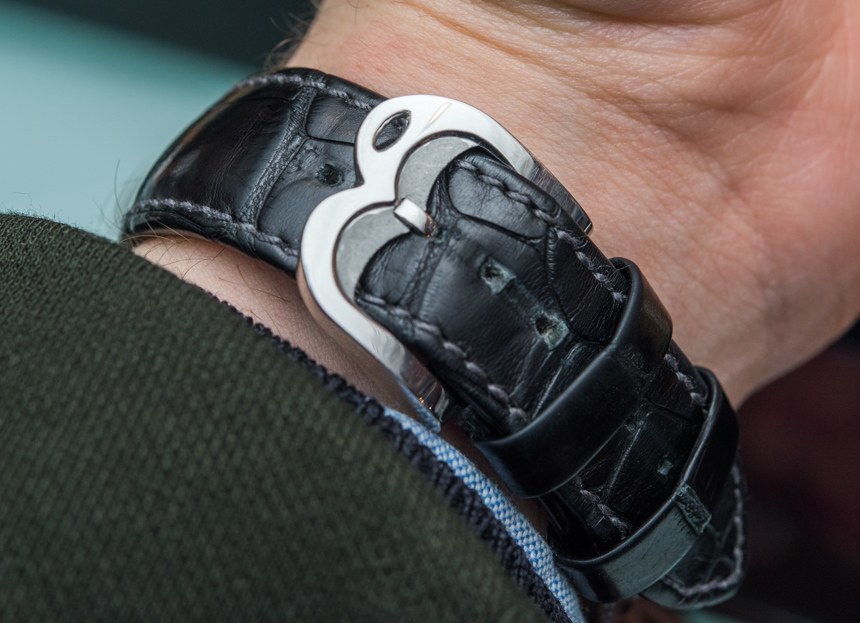 At 41mm wide, the watch is not small, but appears much daintier than its measurements suggest because of its rounded edges. The calibre B01 benefits from the absence of an automatic device framework, enabling the whole timepiece to come in at a very manageable 11mm tall. It is large enough to be on trend and slim enough to be worn with a dress shirt. The running seconds hand located at 6 o’clock reminds us the movement is beating away, despite the otherwise languid appearance of the dial. With a power reserve of 40 hours, you will have good and frequent reason to remove the watch and have a look at its glorious movement, and maybe take the chance to reset the time – just for fun. 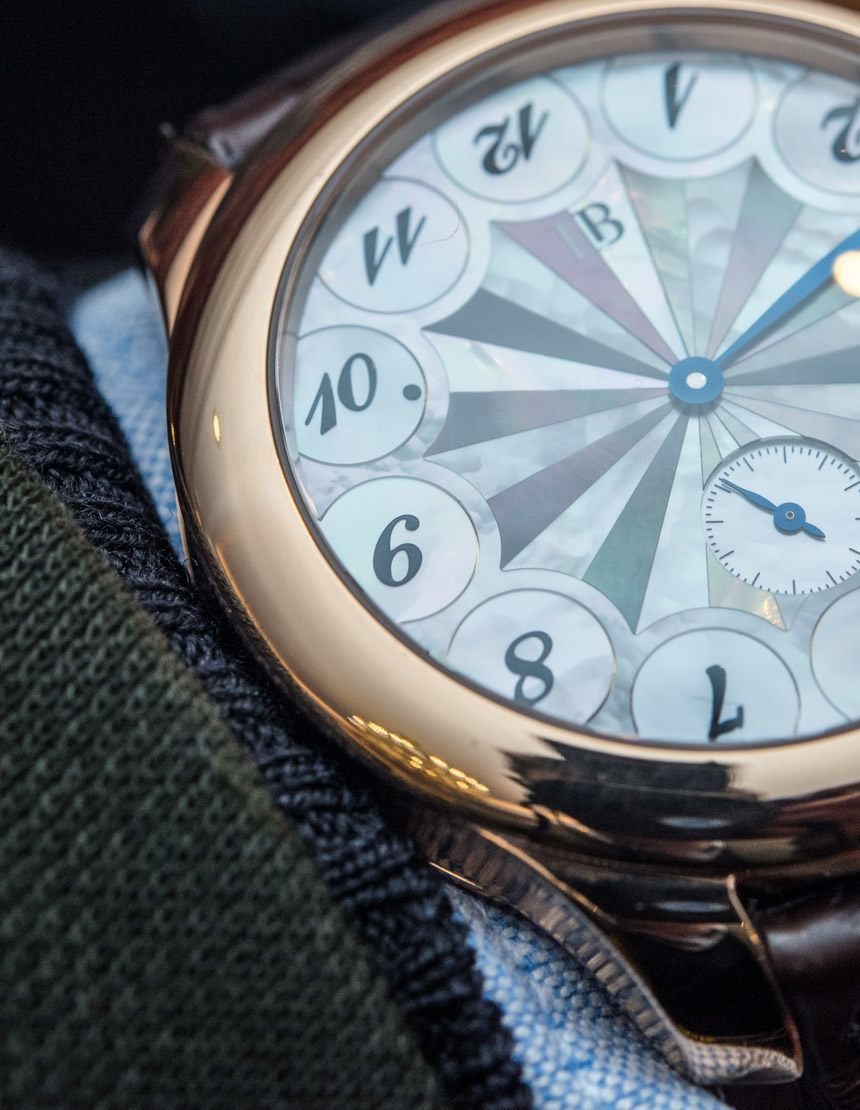 For all his stoicism, Ludovic Ballouard is a man who sees and embraces the simple joy in something that works well. His watches remind us of that. The Ludovic Ballouard Upside Down with mother of pearl dial is available in a limited edition of 12 pieces in platinum, priced at $76,000 (70,000 Swiss francs), and another 12 pieces in rose gold at $68,500 (63,000 Swiss francs). If you have that kind of cash laying around, spending it on something that reminds us that every hour should be enjoyed may not be such a bad investment. If it were ever within my means to afford a watch in this price bracket, I can say for sure that this is the one I would choose. ballouard.com