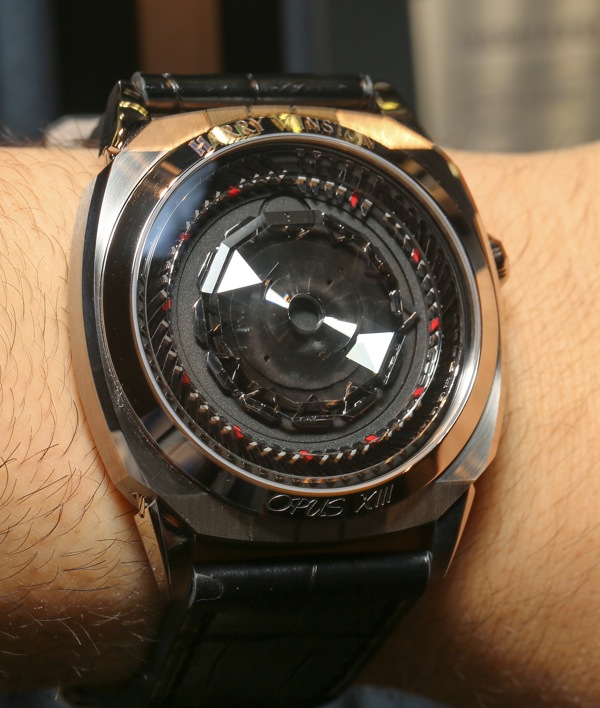 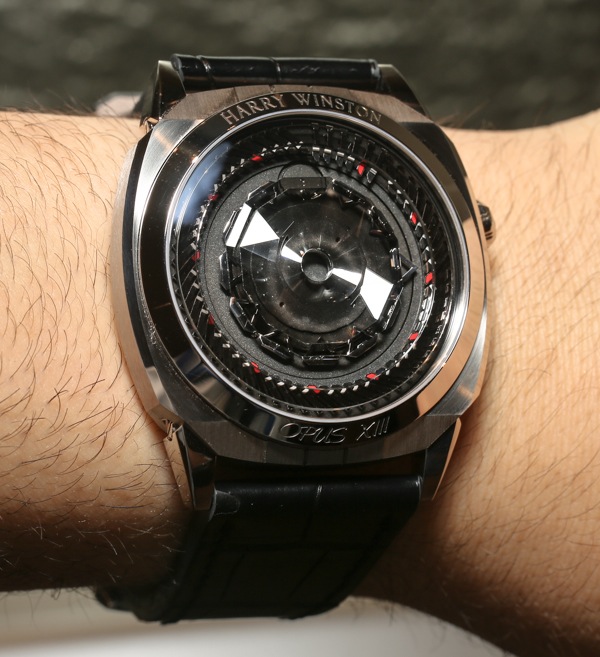 Each year the Baselworld watch show begins with a set of simple rituals such as anticipating amazing new things from Rolex only to see an existing watch in a new color, and once again finding that Patek Philippe isn’t going to make a futuristic looking timepiece. Among the necessary things to do when a new Baselworld show opens its doors is visit Harry Winston to see the new Opus watch. I’ve discussed most of the Opus pieces at length so another explanation of the history of the Harry Winston + independent watch maker Opus range founded by Max Busser isn’t necessary. The idea was a personality driven collection of fresh, limited edition high-end pieces each year that emphasized spirited and extravagant design. Not really a money maker, Opus watches are less about income from their sale and more about media attention, gaining the potential to help people focus on the Harry Winston brand overall.

Thirteen Opus watches into it and most people on the outside would say that the Opus collection has been a success. They are most all cool, and it has put Harry Winston on the map with a new set of collectors who might never have considered Harry Winston otherwise. Though for Harry Winston, the Opus collection remains an enduring production as well as design challenge. The Opus XIII collection follows suit and is an interesting new Opus timepiece produced by the very talented French watch maker Ludovic Ballouard. Formerly with F.P. Journe, Ballouard is known among select watch aficionado circles for his Upside Down watch. Elegantly complicated with a whimsical touch, his core talent is borrowed for something much more intense in the Opus 13. 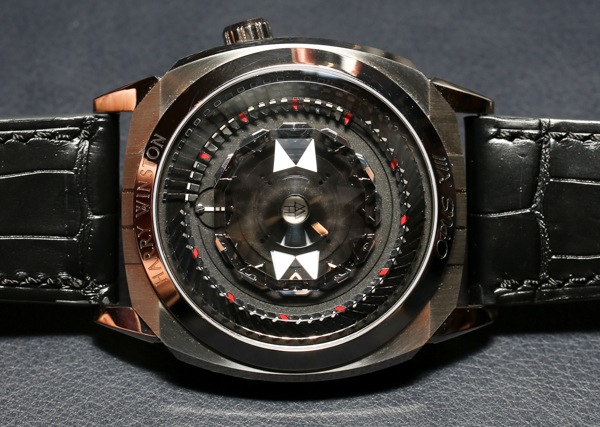 Opus XIII is probably the most difficult watch I’ve had to photograph (ever), and that is with two additional people helping me here at Baselworld 2013. There is a centrally-mounted sapphire crystal that has been smoked and faceted like a diamond. It literally absorbs light, making this watch a demon to shoot. It is however fun to play with. Building on Ludovic’s concept of appearing and disappearing indicators, the Opus XIII has hour markers that flip out from the central area when it is their turn, and then flip back to hide until it is their turn to display once again. The same thing goes for the minute markers, that individually flick out as the hour passes by. At the end of the hour they all hide back under a periphery ring also made of smoked sapphire crystal.

When the time is 12 o’clock, the Opus XIII finally shows the Harry Winston brand logo in the center of the watch through a small window. You can feel the entire watch shudder as the powerful system advances each second. All of this is possible because of a second mainspring barrel that stores energy to supply energy for all of the “jump appearing” hour and minute indicators. Red-tipped hour indicators signify five minute increments. The system is very cool. 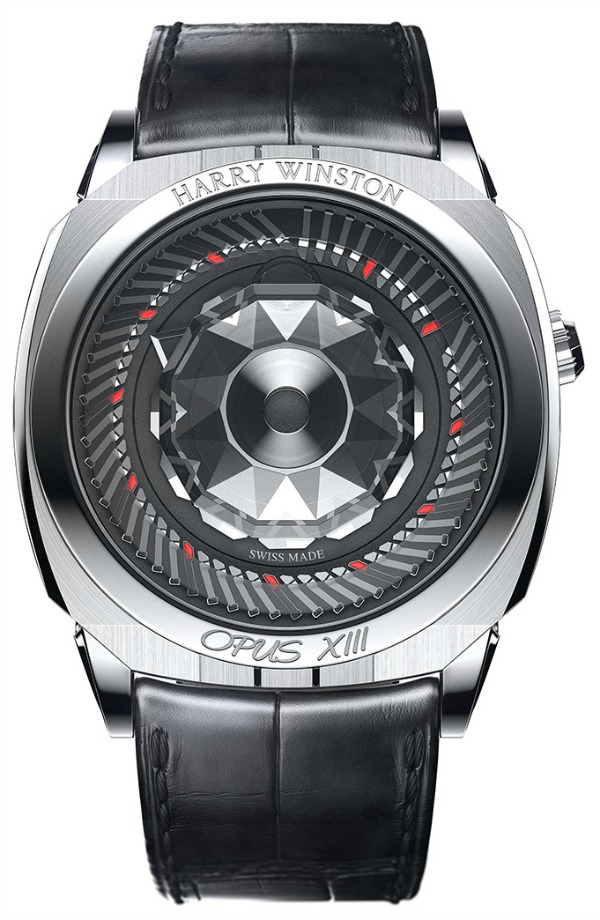 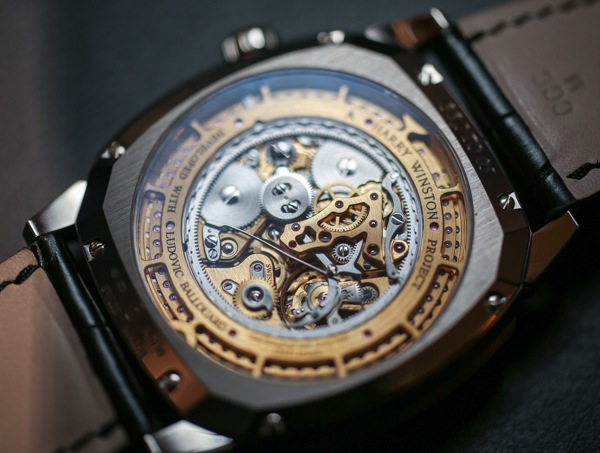 The Opus XIII is not the most legible watch, but then again most of the other Opus pieces aren’t either. Mechanical complexity and experimentation is valued here above all else. Though unlike some other Opus pieces, Ludovic’s watch is relatively straightforward and simple to understand. Setting the watch is simple. When the crown is in the time setting position, one direction adjusts the minutes, and the other the hours.

Visually, the dial of the Opus XIII looks nothing like what they have done beforehand with its shiny allure and secret coolness. The XIII is quite symmetrical and often dark in its gaze as the middle-placed crystal sucks up so much light. Still, there is an inherent simplicity in the Opus XIII. Its functions are easy to grasp intellectually, and the movement doesn’t barrage you with too many new things you haven’t seen before. If you were expecting something new from Harry Winston in the Opus collection, the Opus XIII will not let you down at all by offering more of what you already know.

In 18k white gold, the Opus XIII case is 44.25mm wide and just over 13mm thick. The cushion-shaped case sits large on the wrist, but the overall presence of all that ‘shine’ makes it feel larger. There aren’t any diamonds in it though – which continues to sometimes feel ironic for a Harry Winston watch. That said, a version with a full pave diamond covered case will be available. Attached to the watch is a comfy alligator strap.

The release of this watch comes at an interesting time, right after the Swatch Group purchased Harry Winston. Unlike the formerly independent American brand, Swatch Group’s control and leadership shift is altering what Harry Winston used to be. What role does Opus have in Harry Winston’s future? That is hard to say. Personally I don’t think that the Swatch Group will want to continue it. Perhaps for a little while, but not for too long. Opus doesn’t seem to go with the diamonds and elegance theme they have for the brand, and Swatch Group is certainly not about giving a brand a face (i.e. the watch maker partner) other than the CEO. I could be wrong. I hope I am wrong, but my instincts tell me that Opus is too complicated to keep alive given its return on investment through sales to the mainstream consumer.

The Opus XIII will be a limited edition of 130 pieces, and will be priced at around $300,000. harrywinston.com 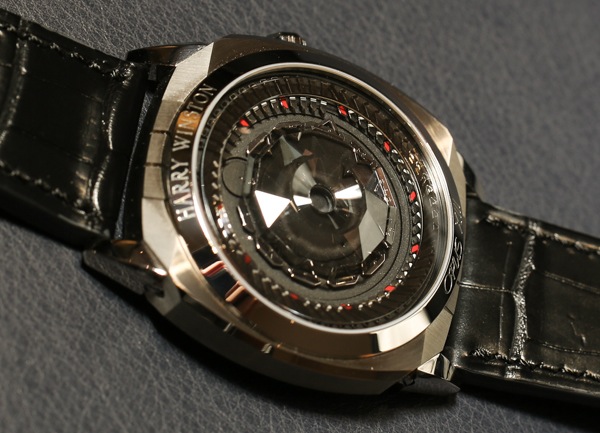 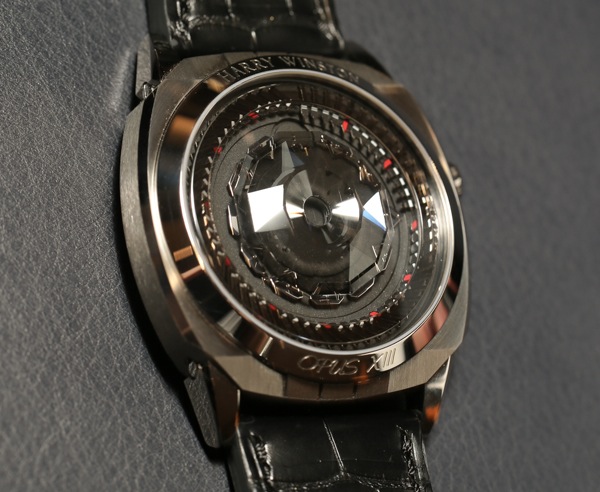