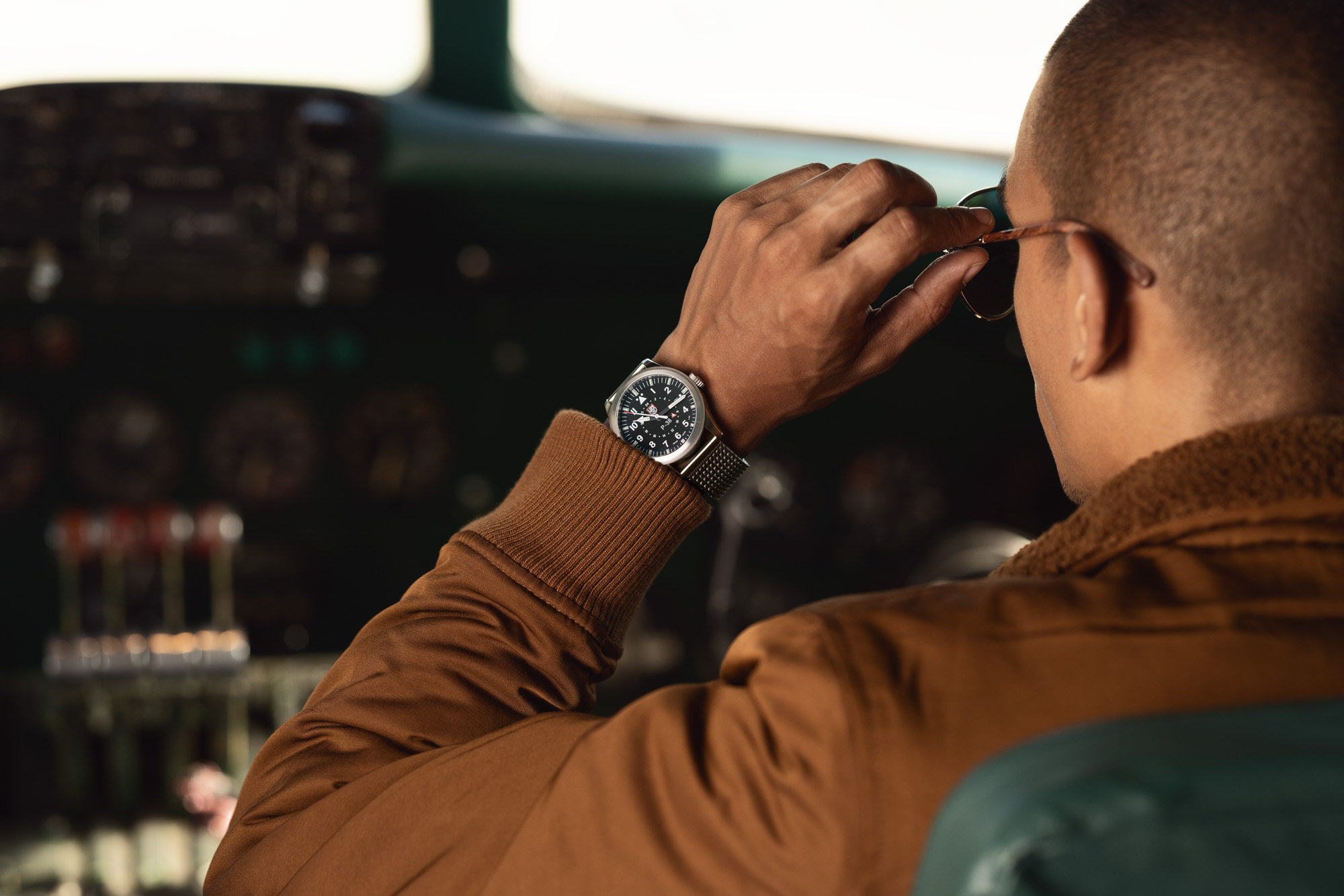 Although Luminox will probably always be best known for its well-documented use among members of the Navy SEALs, the brand is also the official watch partner for the legendary American aerospace engineering company Lockheed Martin. Given that Luminox has military use in its DNA and almost exclusively produces tool and sports watches, it hardly comes as a surprise that the brand also has a range of pilot’s watches in its contemporary catalog. Joining the lineup as members of the aviation-centric Pilot series are two new models that draw their inspiration from famous and historic Lockheed Martin airplanes. 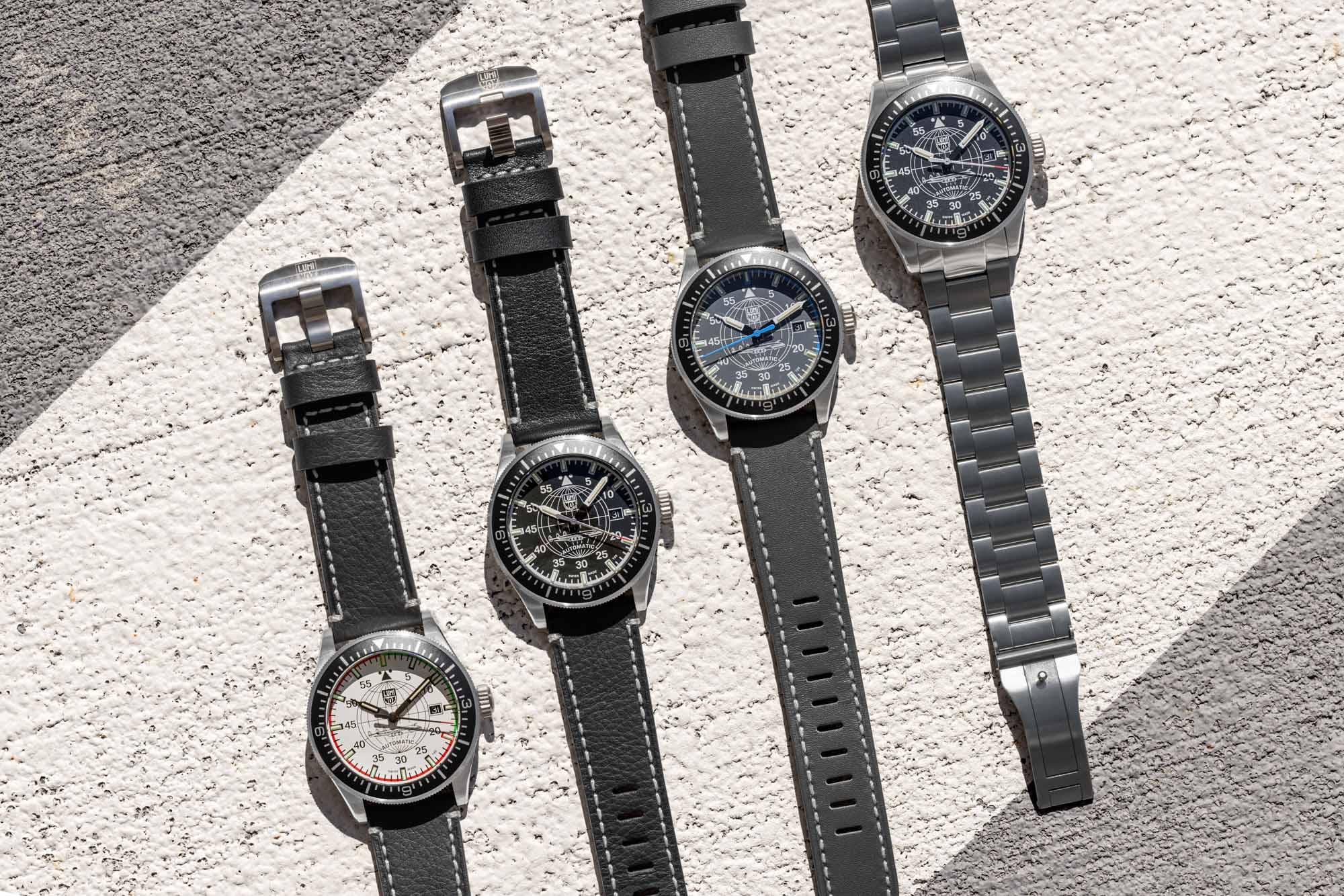 Up first is the Luminox Air Pilot P-38 Lightning, which is a pilot-style GMT watch that is based upon the Lockheed P-38 Lightning fighter plane that was famously used by U.S. forces during World War II. Known for its speed and superior maneuverability at high altitudes, the Lockheed P-38 Lightning was a single-seat, twin piston-engined aircraft with a distinctive dual-tail design that featured a central cockpit connecting the two engine bodies on either side of it. In the same way that the famous Lockheed airplane features a dual engine design, the new Luminox Air Pilot P-38 Lightning features a dual time zone display wrapped up in purpose-built pilot’s watch styling. 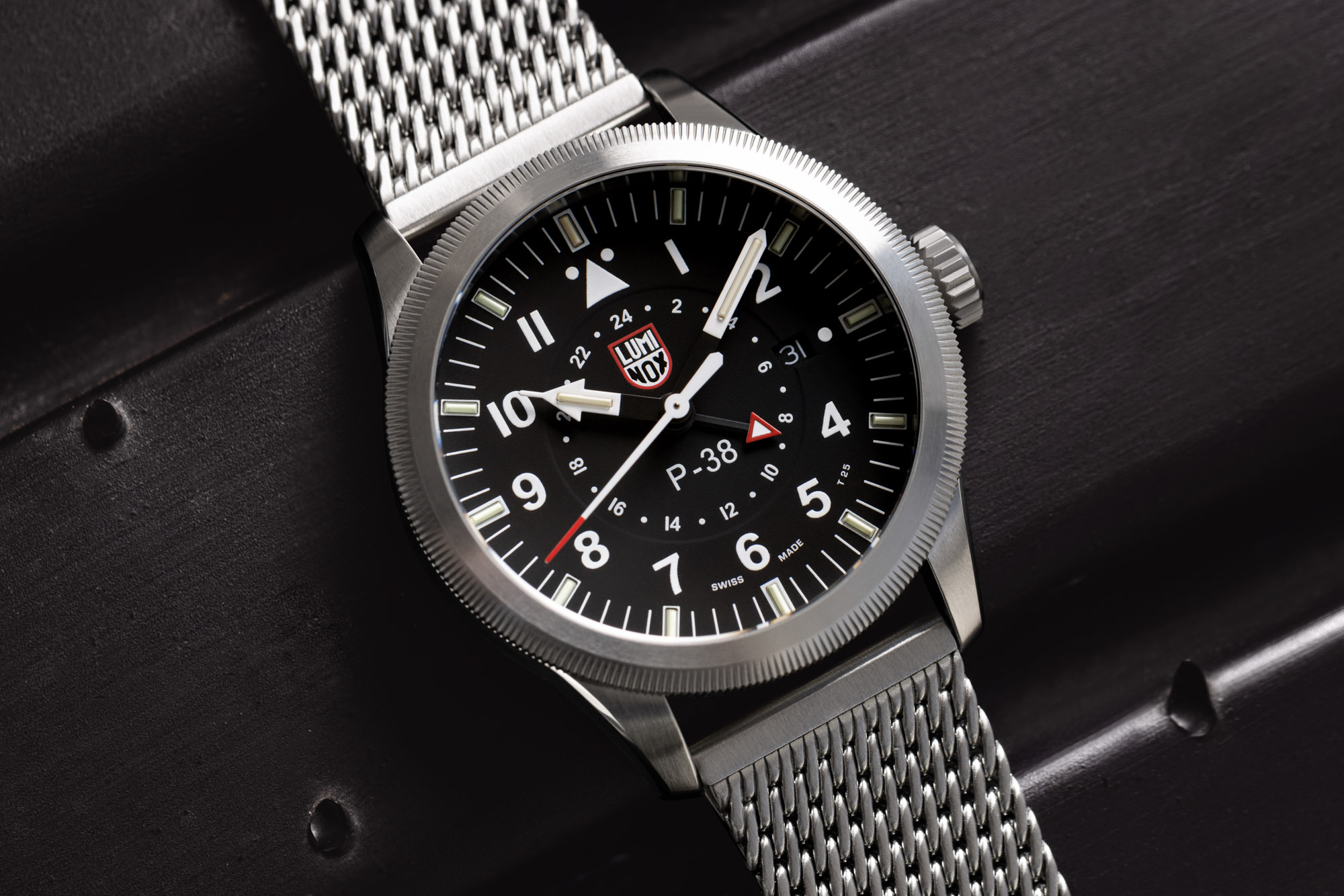 Crafted from stainless steel, the case of the Luminox Air Pilot P-38 Lightning measures 42mm in diameter by 14mm thick, and the top side is fitted with an anti-reflective sapphire crystal surrounded by a fixed coin edge style bezel. The reverse side of the watch receives a solid stainless steel screw-down caseback that features an engraving of a P-38 Lightning airplane, while a screw-down crown located at the 3 o’clock location offers access to the movement and helps provide the watch with 100 meters of water resistance. Powered by a Ronda 515.24h Swiss quartz movement with a 50-month battery life, the Luminox Air Pilot P-38 Lightning offers a date window at the 3 o’clock location, while it displays its secondary time zone with an arrow-tipped GMT hand and a corresponding 24-hour scale that appears along the interior perimeter of the dial. Available in either black or off-white, the dial offers a relatively traditional pilot’s watch design, with large Arabic numeral hour markers and an upwardly pointing triangle flanked by two dots at the 12 o’clock location. Additionally, while the white dial model comes with a black leather strap attached to its 22mm lugs, the version with the black dial is offered on either a brown leather strap or a matching stainless steel mesh bracelet. 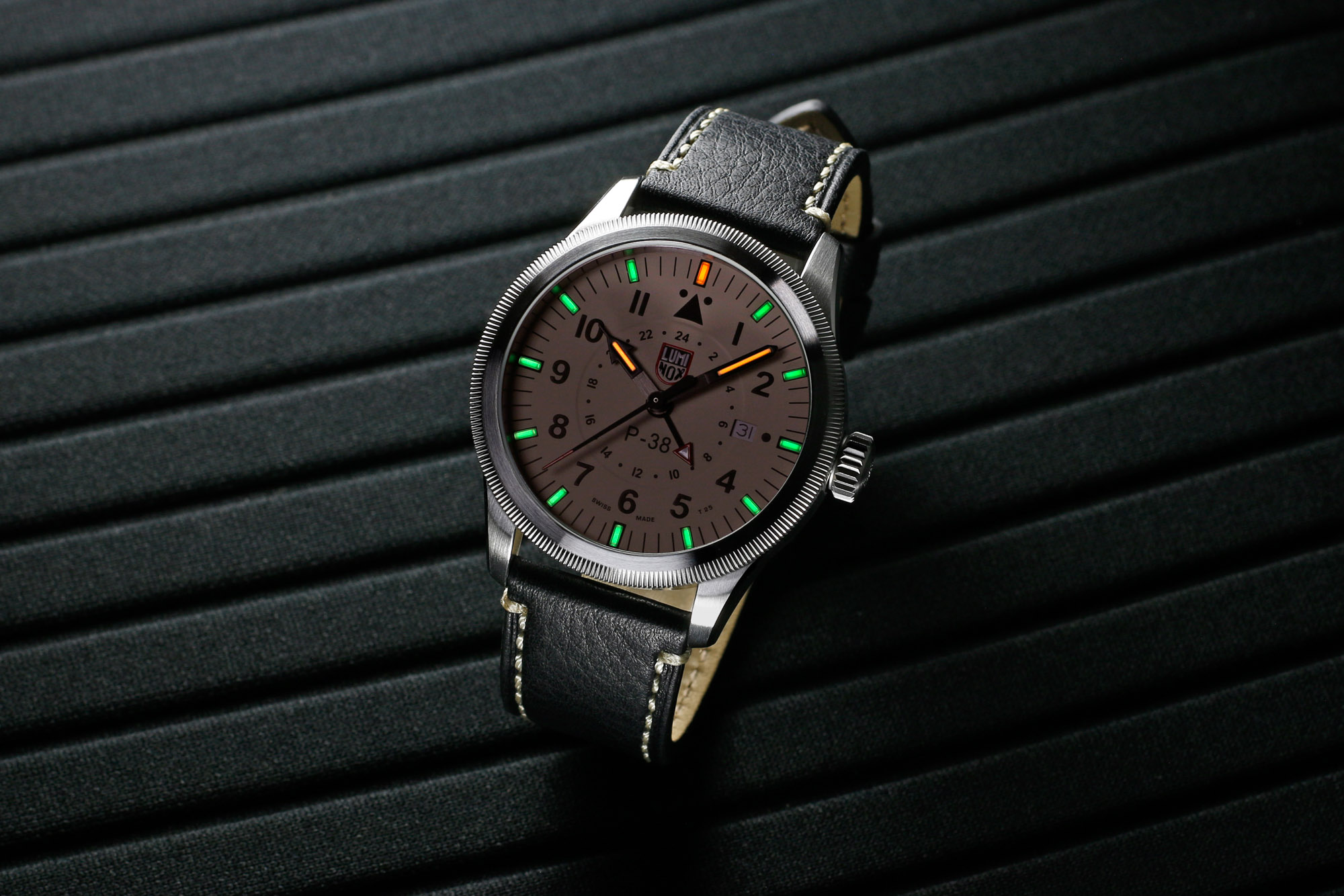 The other watch joining the lineup is the Luminox Constellation Automatic, which draws its inspiration from the Lockheed Constellation aircraft, a propeller-driven, four-engine airplane that came out in 1943 and holds the distinction of being the first pressurized-cabin civil airliner to be adopted for widespread use. The Lockheed Constellation set a number of flight time records, including the 1944 quickest flight from Burbank, CA to Washington, DC, which it completed in a time of just under seven hours at an average speed of 331 miles per hour, while being flown by American businessman and pilot Howard Hughes. Nicknamed the “Connie,” the Lockheed Constellation represented a major step forward for both civil and military aviation, and the legendary aircraft now serves as the inspiration for the latest addition to the Luminox Pilot series. 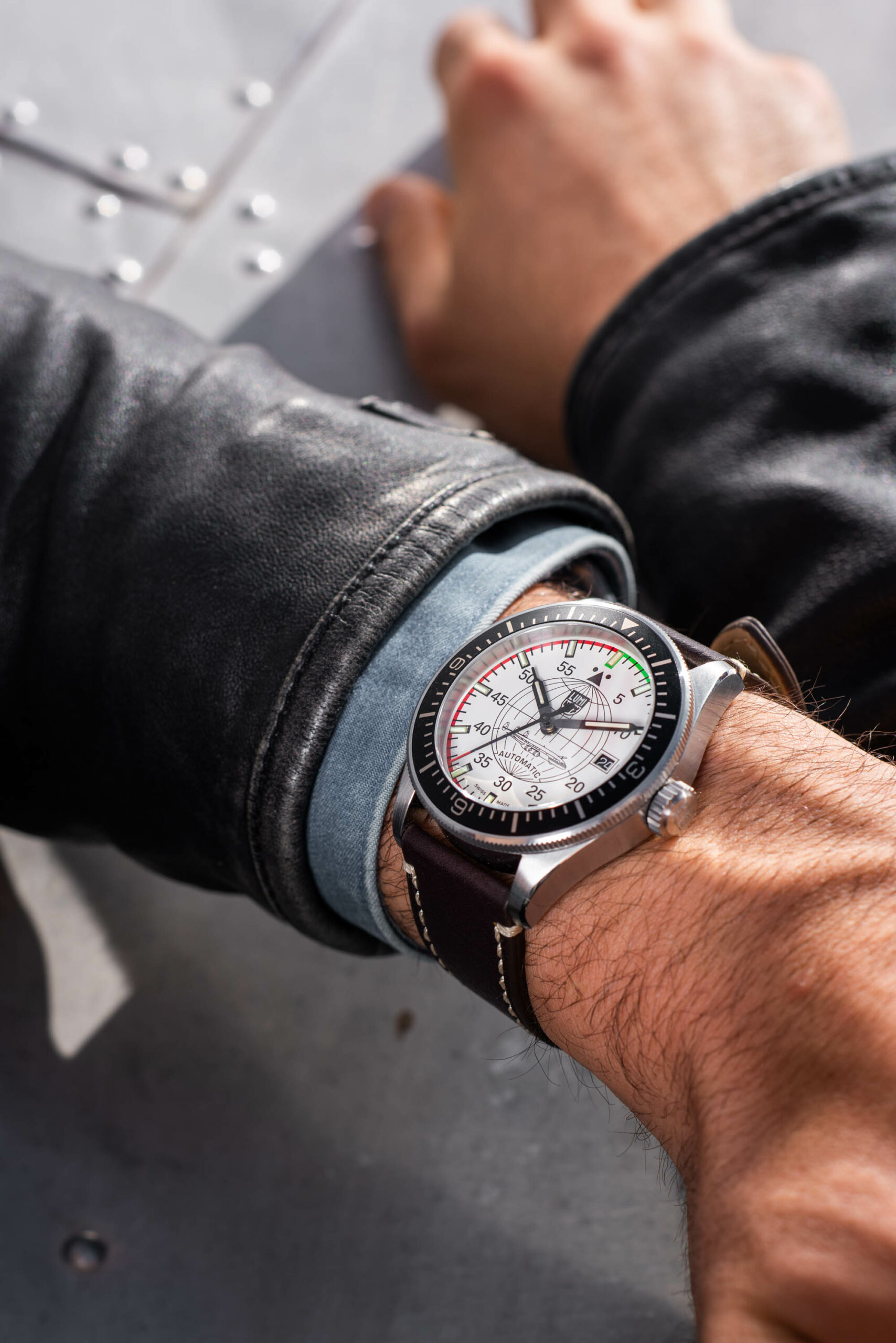 The case of the Luminox Constellation Automatic is crafted from stainless steel and measures 42mm in diameter by 14mm-thick, with an anti-reflective sapphire crystal and a bi-directional rotating bezel fitted to the top of the case. The bezel includes a black insert that has an inverted triangle at 12 o’clock, Arabic numerals at the 3-6-9 locations, and hash marks for every single minute going the rest of the way around the bezel. While the Arabic numerals technically classify it as a 12-hour bezel, the 60-minute hash marks make it just as well-suited for being used as a more traditional timing bezel. A screw-down winding crown located at the 3 o’clock location paired with a solid stainless steel caseback help provide the watch with 100 meters of water resistance, and similar to the Air Pilot P-38 Lightning model, the solid caseback of the Luminox Constellation Automatic is adorned with an image of the Lockheed aircraft that serves as its inspiration. 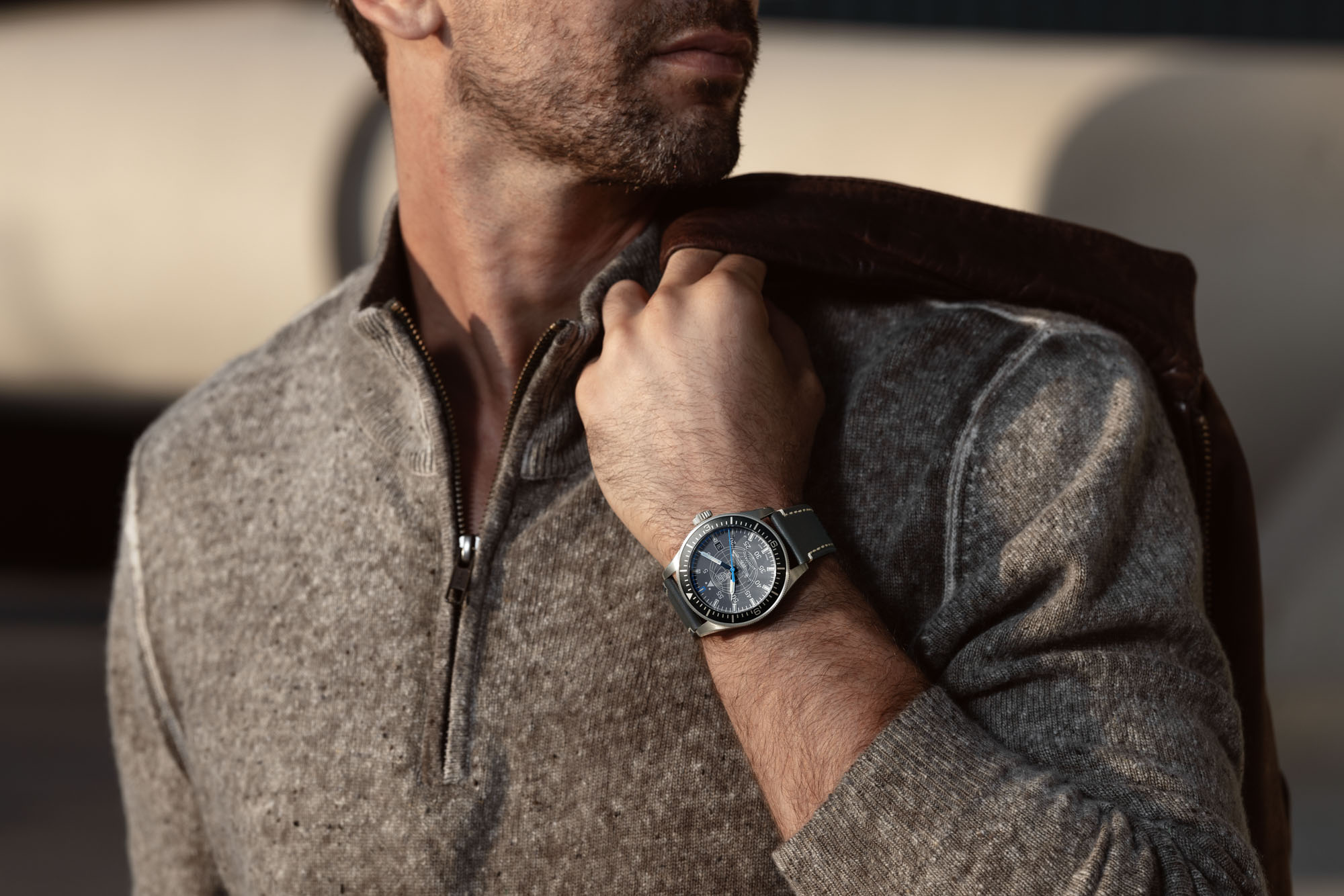 Powering the Luminox Constellation is the Swiss-Made Sellita SW200-1 automatic movement, which runs at a frequency of 28,800vph and offers users a 38-hour power reserve. In total, three dial variations are available — black with all white markings, gray with white markings, and a brown and blue minute track, or a light cream color with black markings and a red and green minute track. Regardless of their different colors, all three dials feature date windows at the 3 o’clock location, along with a globe pattern in the center that features a picture of the Lockheed Constellation airplane. Fitted between the 22mm lugs across the Luminox Constellation Automatic collection are leather straps in either black, brown, or gray to compliment the color of the dial; however, Luminox also offers the black dial version with the option of a three-link stainless steel bracelet. 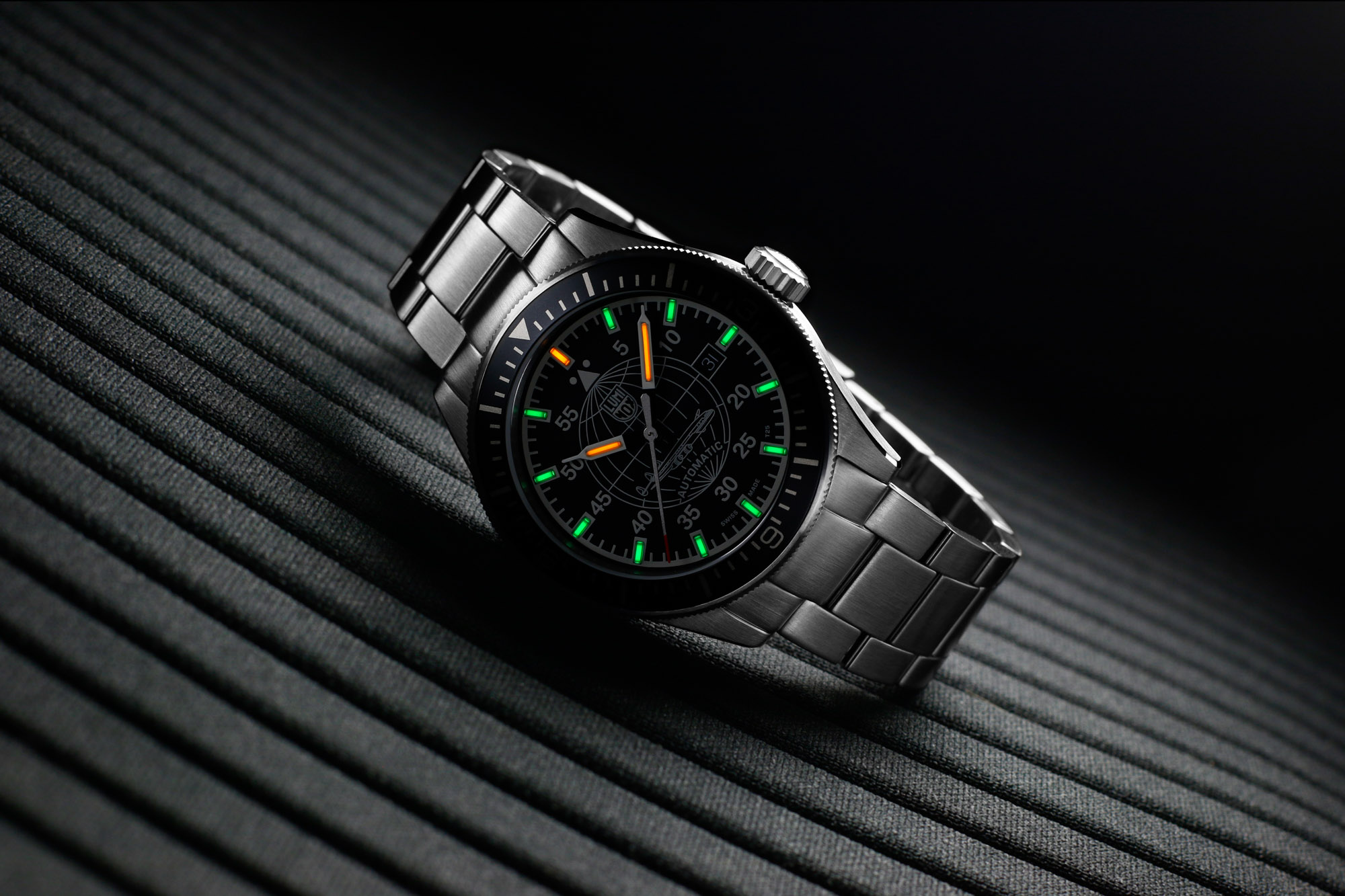 As is the case with virtually all of the brand’s modern watches, the dials and hands of both the new Luminox Air Pilot P-38 Lightning and the Luminox Constellation Automatic are equipped with the company’s signature Luminox Light Technology, which features tritium gas-filled tubes that will emit a continuous glow for up to 25 years, regardless of whether or not they have received any previous exposure to light. While most of Luminox’s current lineup has a modern and tactical overall aesthetic, these two new Pilot series watches almost have a vintage design element to them, which only makes sense considering that they were inspired by legendary Lockheed airplanes from the 1940s. With an official retail price of $595 USD for the Air Pilot P-38 Lightning ($645 USD for the version on the bracelet) and $1,095 USD for the Constellation Automatic (or $1,195 USD for the bracelet version), the new Pilot series watches are priced right in line with the rest of Luminox’s current offerings and they provide a fresh aesthetic with a healthy dose of aviation heritage. For more information please visit the brand’s website.