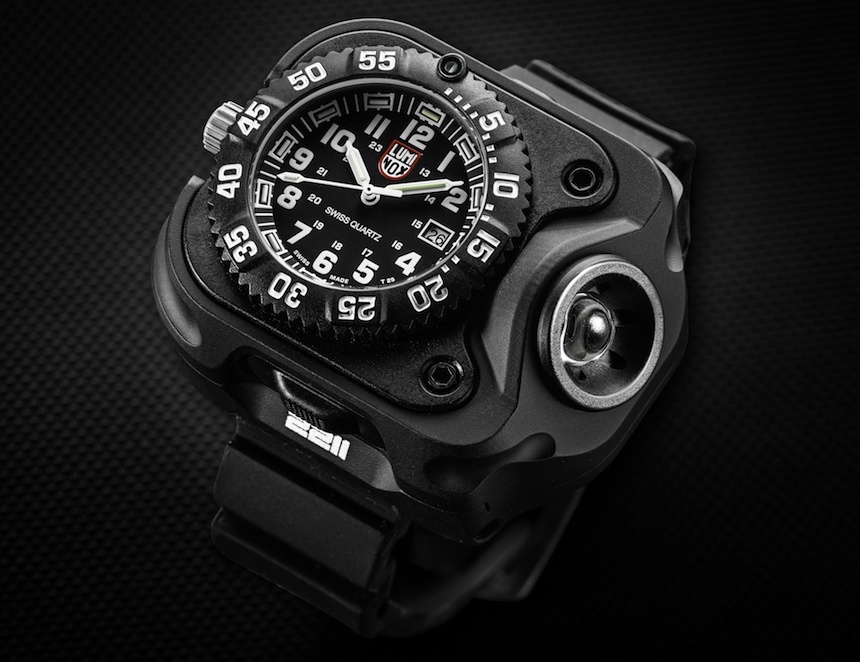 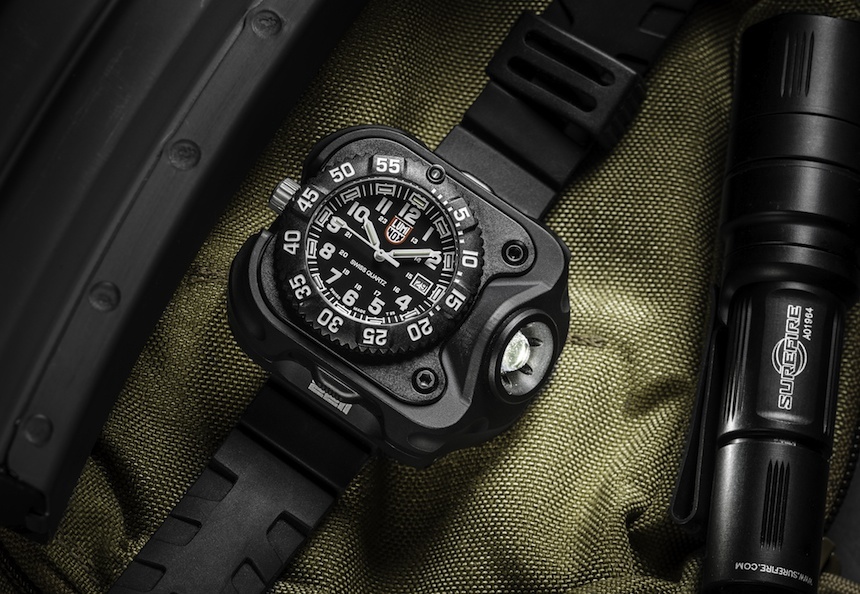 We have seen tool watches specifically designed to be used by divers, fighter jet pilots, navy seals, scientists, railroad engineers, and a vast number of other unique professions. Tactical watches, however, are few and far between, for they have to be designed to meet the unique requirements of an extremely niche market of professionals. The Luminox Surefire 2211 Wristlight Tactical watch is among these “endangered species,” as it combines the legibility and reliability of a Swiss Luminox quartz watch with the 2211 Wristlight by SureFire.

SureFire is a California-based company that specializes in the production of weapon-mounted lights and laser sights, shield lights and baton lights, as well as hand-held lights. The 2211 Wristlight, as its name suggests, is a rectangular flashlight that is worn by members of the L.A. police on the firearm support-hand wrist. Beyond offering a “hands-free” use, this flashlight is different from your average flashlight in that, as SureFire puts it, it is powerful and bright enough to qualify as a “force-option” tool that could temporarily blind, unbalance, and disorient a threat. To see – or perhaps “not see” – what that means in practice take a look at the video above as it has some footage that shows just how powerful this light is. 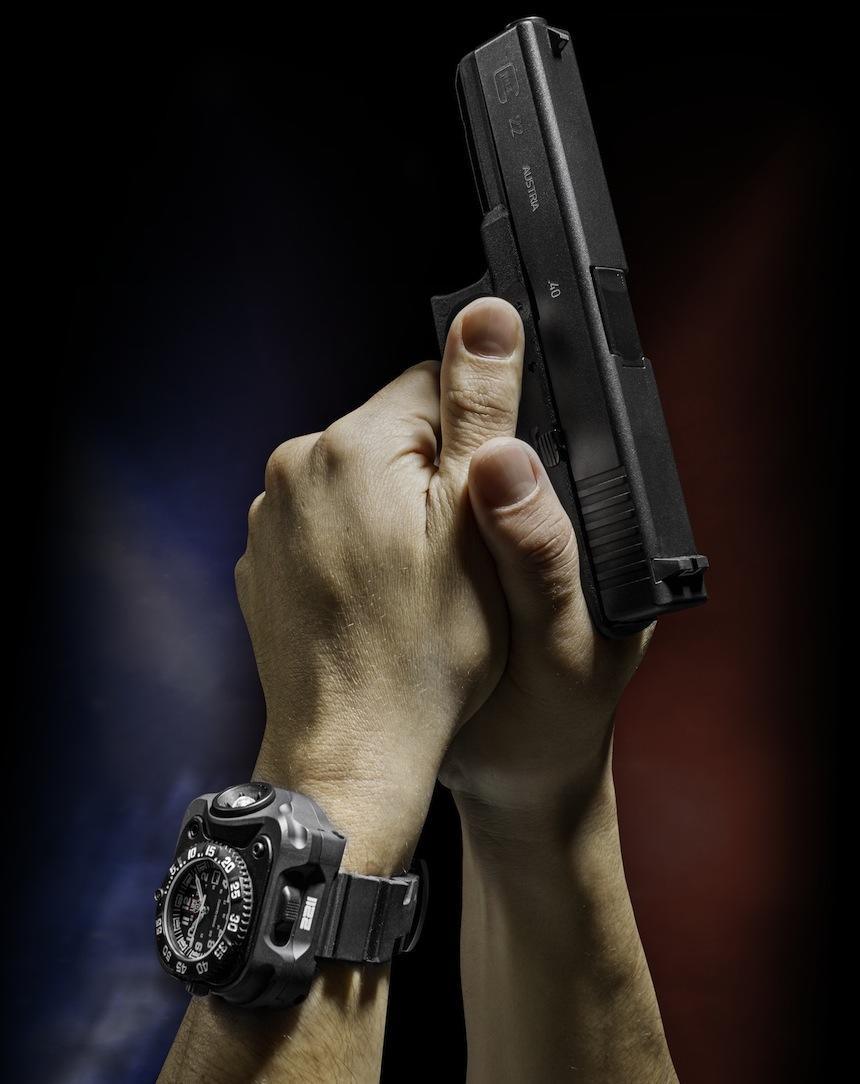 The light is powered by a Li-Ion integral battery that can be charged via a micro-USB slot set into the side of the watch. It has a 15, 60, and 300 lumens setting – which I presume tells a lot to experts in the field – in comparison, an iPhone’s LED is said to have about 15-20 lumens when used continuously and about 45 lumens when it is used only as a flash. Now, what that tells me is that the 300 lumen power should be more than enough for everyday use – and quite possibly, it can be used to blind others when directed at them (but we would recommend you do not try this at home… or anywhere else). The light in its highest setting can run for over one hour, while in its lowest setting the battery is said to last for about 13 hours. 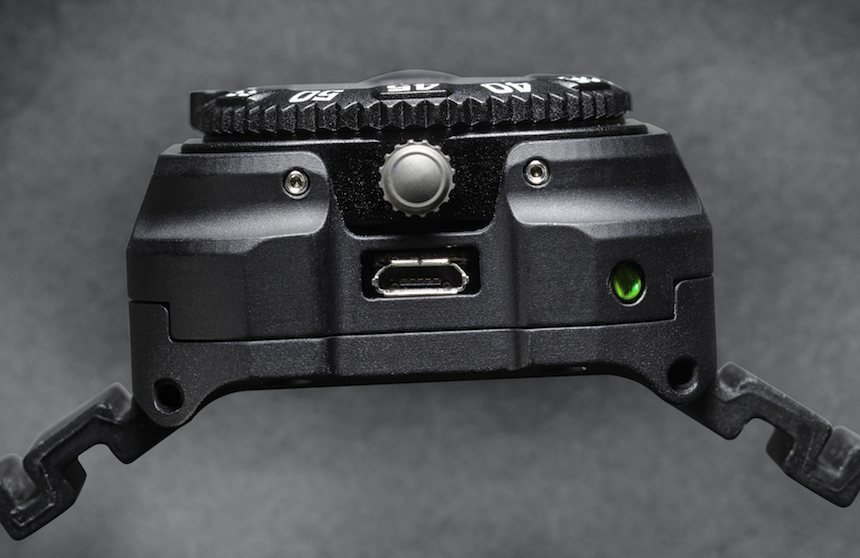 We have established that the light should be outrageously powerful, but what makes it interesting for us is that sitting on top of the 2211 light and battery module is a quartz watch by Luminox, reminiscent of the brand’s Colormark 3150 series. The Luminox SureFire 2211 Wristlight Tactical watch is a more simple three-hand watch with a date function and a uni-directionally rotating bezel. What makes it a more capable companion in those low-light circumstances – where the Wristlight would be used anyway – is that the indexes and hands of the watch are illuminated by tritium gas tubes that glow continuously and do not need to be “charged” to emit light.

The body of the 2211 Wristlight is anodized aluminum – which was primarily necessary as the piece measures in at 61 by 51 millimeters and is 28 millimeters thick. That is huge even by today’s standards, and had this gargantuan piece been crafted from steel, no strap could have kept it secured on the wrist. With the aluminum body, it weighs a more manageable 143 grams, although that still is the weight of one of the largest smartphones strapped to your wrist. Anyhow, the use of anodized aluminum is interesting, as it is often criticized for its reportedly compromised durability. Apparently, it is just hard enough to be incorporated in an item intended to be used by professionals. 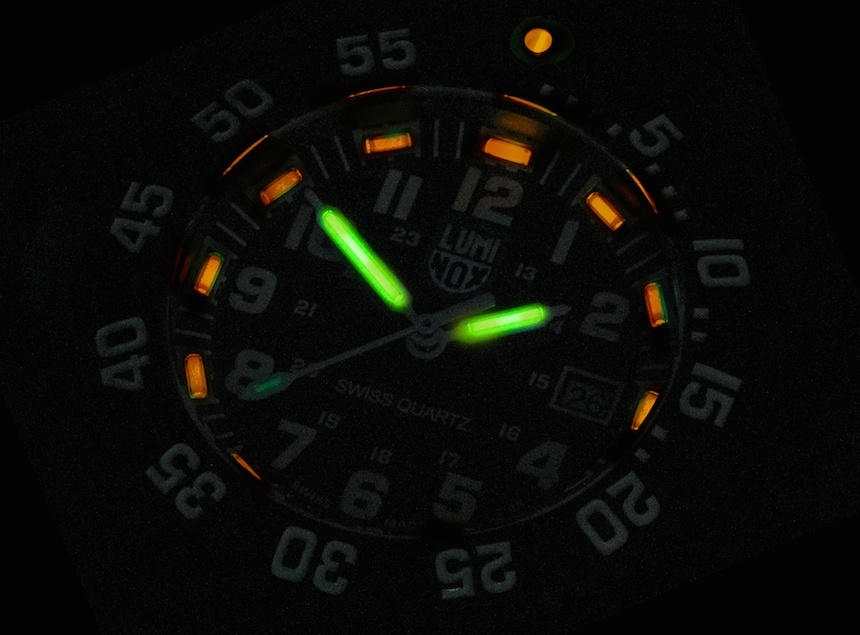 In essence, the Luminox SureFire 2211 Wristlight Tactical watch is an incredibly cool – and arguably very niche – gadget, something that is to a great extent redundant from the everyday lives of the absolute majority of us… and yet, as a proper gadget should, it likely will be a “must-have” item for those intrigued by such devices. The price for the Luminox SureFire 2211 Wristlight Tactical Watch is $795. surefire.com