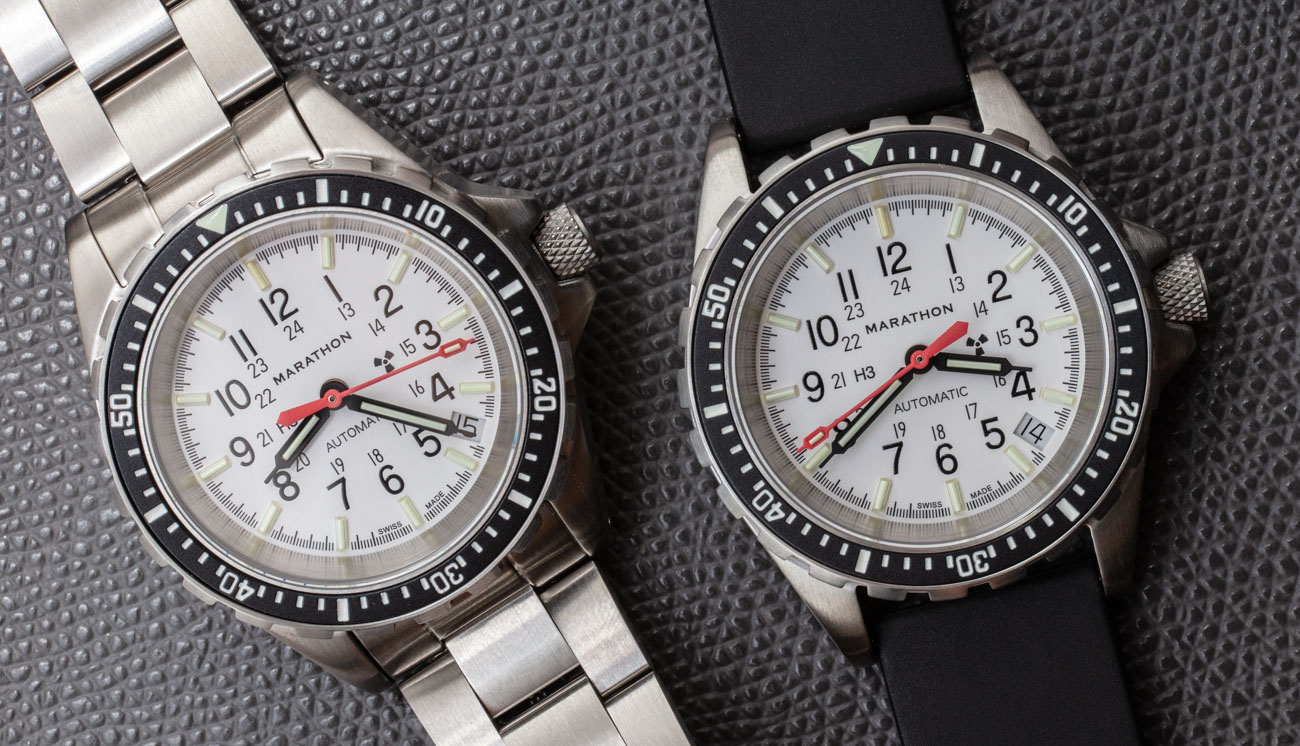 Today, Canada-based Marathon debuts the reference WW194026-WD (WW194026-BRACE-MA-WD on the bracelet) Arctic Edition Medium Search And Rescue Automatic with Date and Tritium 36MM Arctic (MSAR Auto for short), and aBlogtoWatch has the scoop. This is the automatic movement-based version (with a few other tweaks) of the previous Marathon Medium Diver’s Quartz watch (aBlogtoWatch hands-on here). The Medium Diver’s Quartz was the first white-dialed watch from Marathon, and the 36mm Arctic MSAR Auto is the second one. Both watches feature the same 36mm-wide stainless steel case, which is water resistant to 300 meters.

Marathon considered the Medium Diver’s Quartz model as a sort of experiment, and less than a year later returned with a refined Swiss Made automatic version of the Swiss Quartz movement model. One change, as you may have been able to determine, is the name of the watch, which now brings the collection back to the Marathon Search & Rescue collection. “MSAR” just stands for “medium search and rescue.” 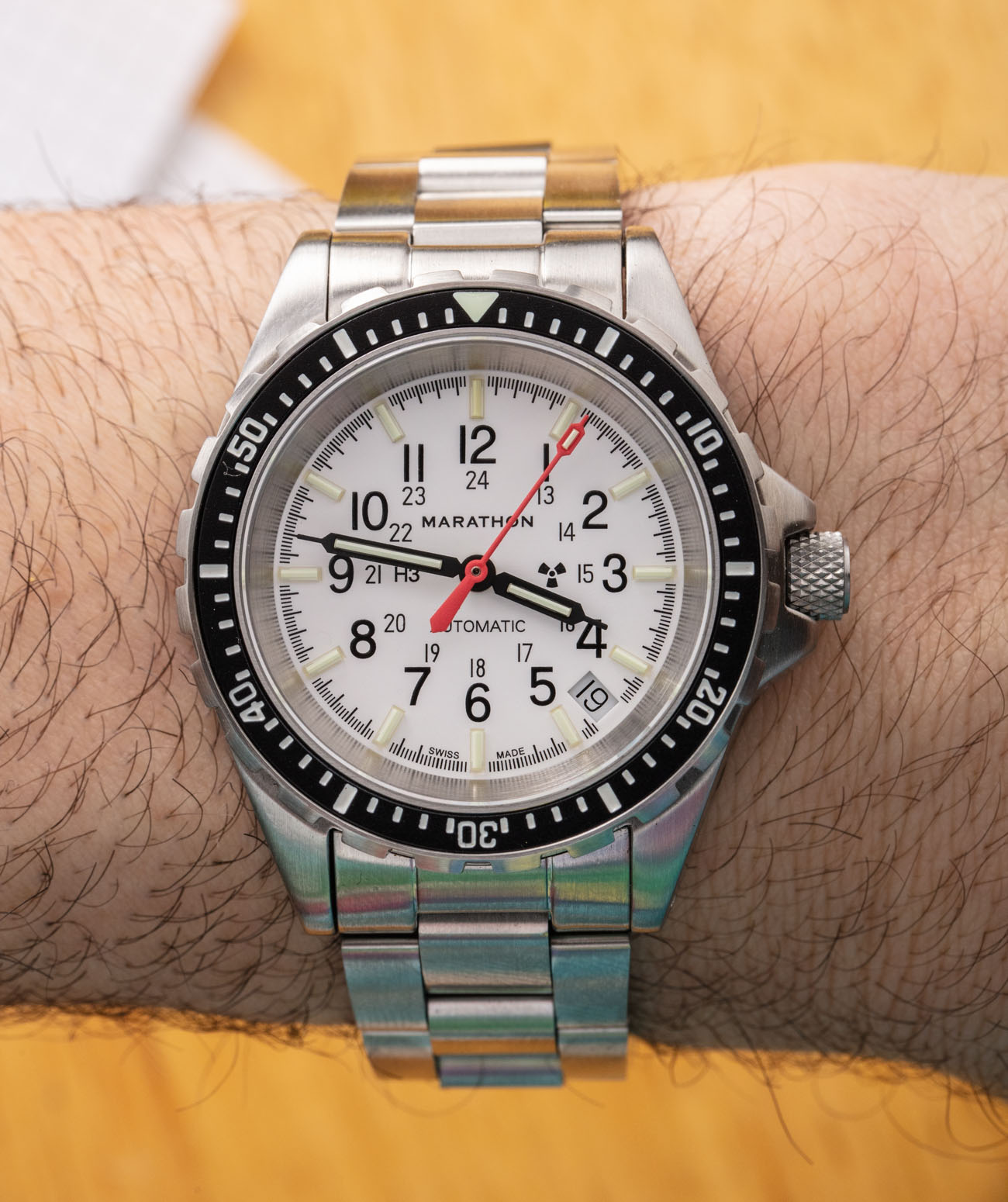 “Arctic” because the dial is white, and no, not because ice is white. Even though the polar regions are very cold, they are also very bright. Snow and ice reflect an enormous amount of light compared to other terrain, and hence the term “snow blindness.” This is caused by the overload of UV rays, which bounce off the ice and hit your eyes. This blindness also makes things like instruments and dials difficult to see. A white-colored dial with high-contrasting black hands and hour markers is a wise idea for such terrain. One of the seminal watches to present this dial color theme to modern audiences is the Omega Speedmaster Professional Alaska Project (aBlogtoWatch review here).

For me, the most important refinement Marathon makes in the 36MM Arctic MSAR Auto is the removal of the Marathon graphical logo from the dial and its placement on the bracelet deployant clasp. The brand experimented with having a graphical logo on the dial, but it didn’t make too much sense (they are one of many brands to learn that) and ended up removing it after just one generation of product. The reality is that, for whatever reason, graphical logos tend to never look as good as text logos on watch dials. Unless a brand is slick enough to have their logo work really nicely as a 12 o’clock hour marker. 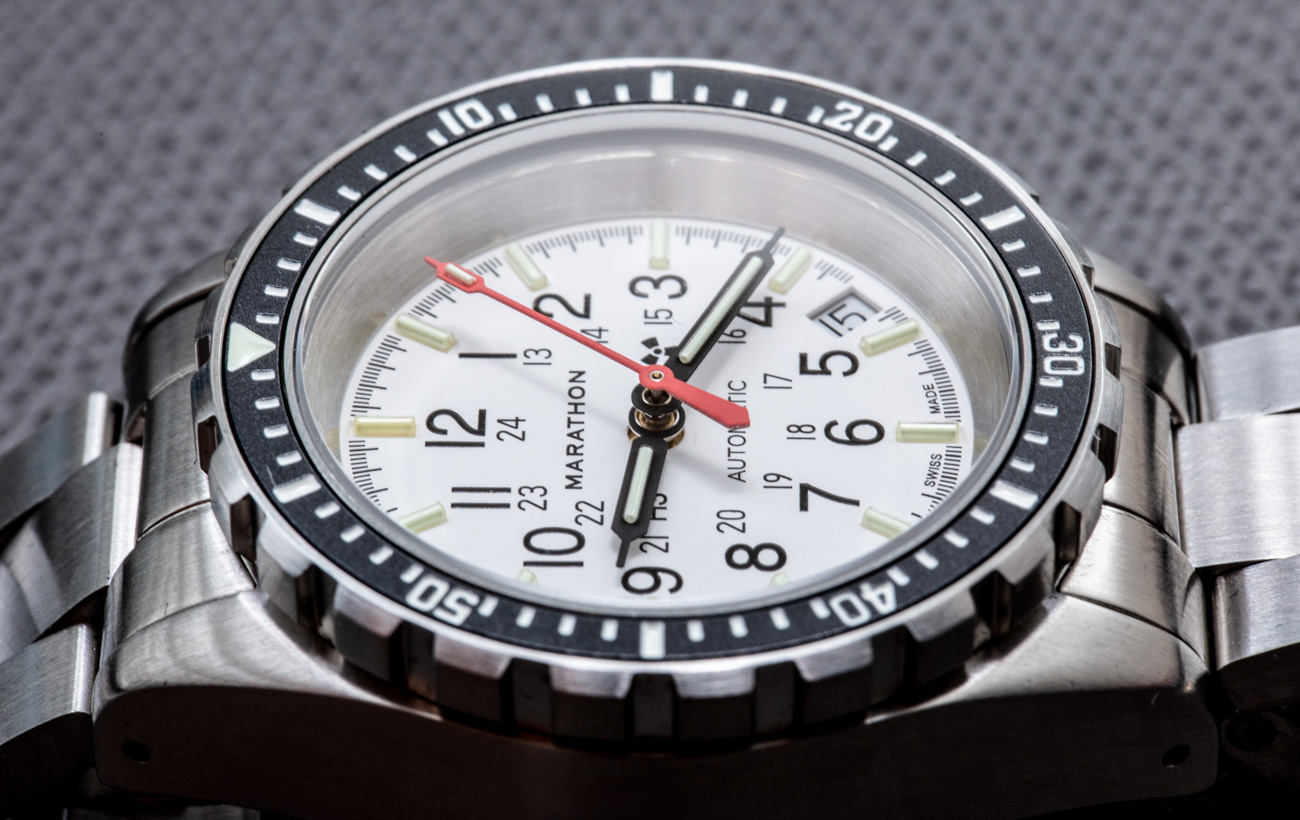 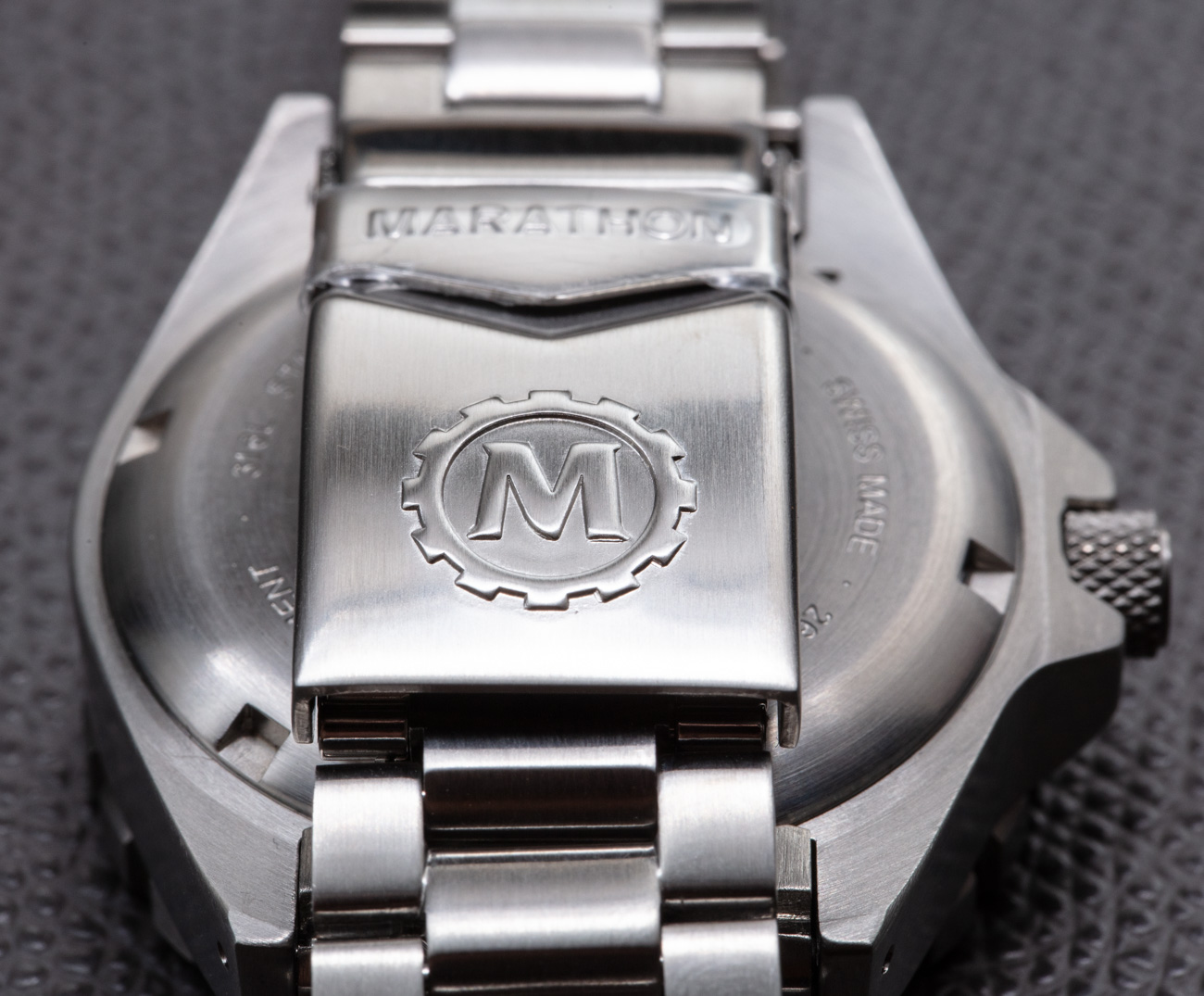 Looking at the relatively naked deployant on the steel bracelet of the Medium Diver’s Quartz and the version on the Arctic MSAR Auto, I think the one on the Automatic is the clear winner. Even though the case is a modest 36mm-wide, it is tall at about 14mm-thick and has a 43mm lug-to-lug distance. The tall unidirectional rotating bezel (with a contrasting black insert) is a Marathon icon, at this point, and over the dial is a flat, AR-coated sapphire crystal. As this is an MSAR collection timepiece, the hour marker and hands are fitted with tritium gas tubes for darkness illumination. Note that the Quartz version of this watch did not have a tritium gas tube in the seconds hand (it used standard light-charging lume), but the hand on this automatic version does. Why? Because normally quartz movements can’t carry hands of a certain weight and, in this context, the tritium gas tubes are heavy.

Case quality is fantastic and, overall, this is a lot of watch for the money. I like that, even though it is meant to satisfy military timepiece standards (Marathon continues to be an official supplier of timepieces to armed forces such as the United States, Canada, and the UK), the watches are “nicer than they need to be” for mere military utility. The rear of the watch is the biggest hint that it is a military-spec device given the plethora of information (which I find pretty cool, actually). Inside the watch is a specialized high-torque Swiss-made Sellita SW200 automatic movement which features an Incabloc shock absorber and operates at 4Hz with about two days of power reserve when fully wound. 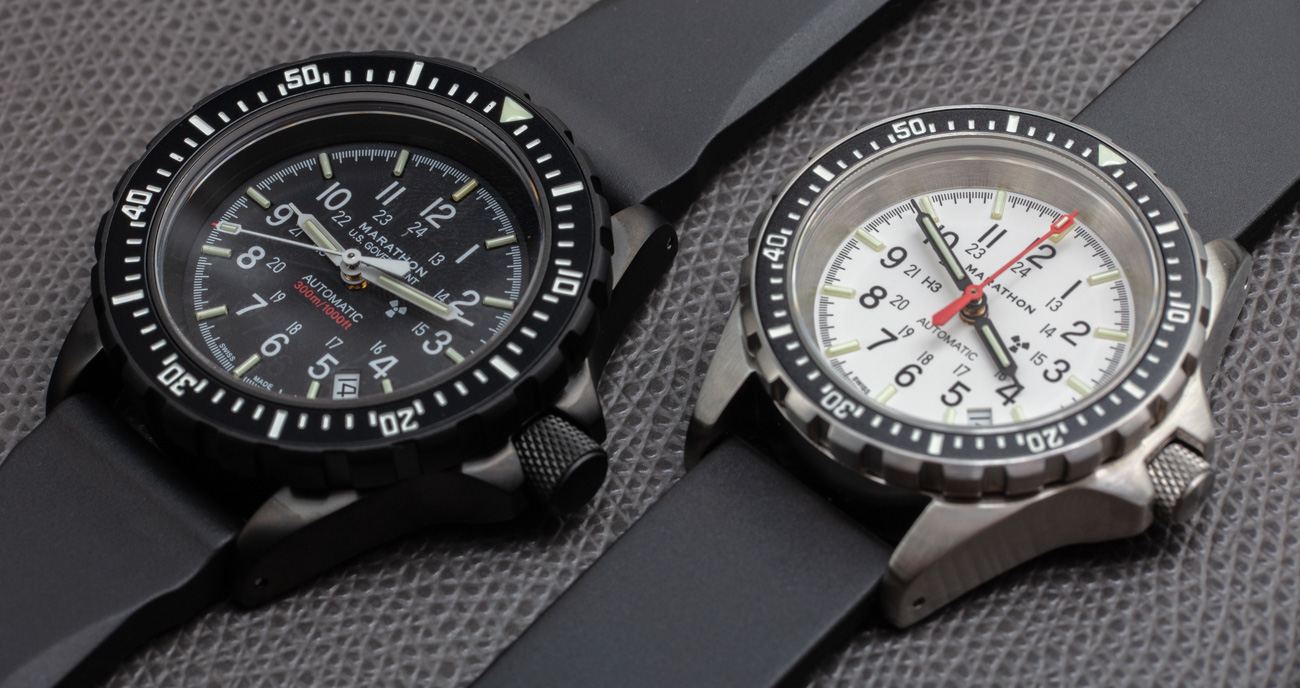 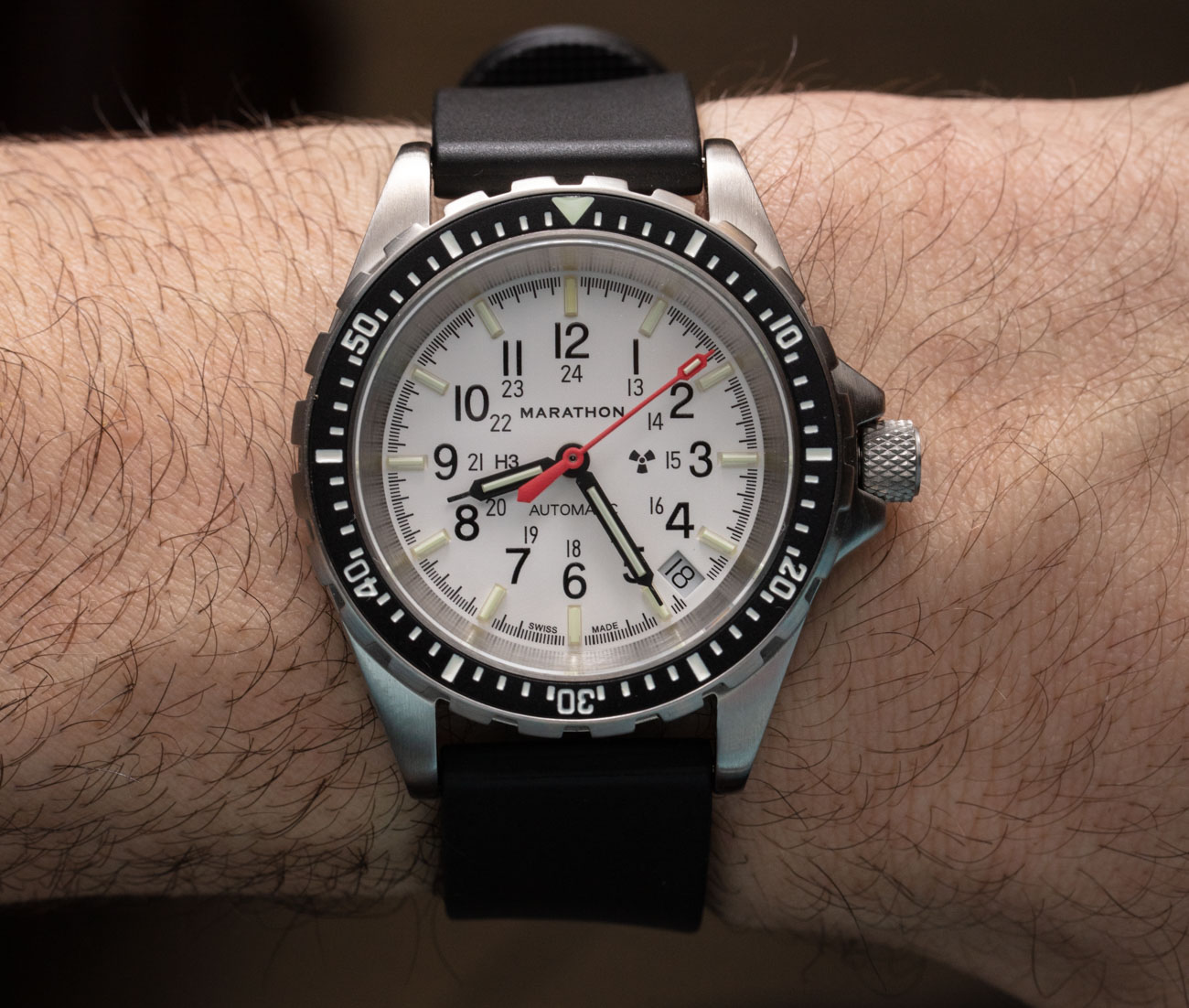 There are a lot of people who wanted an automatic version of the white-dial 36mm Medium Diver’s Quartz watch, and now it is here. Next, Marathon will probably experiment with a white dial for its larger timepieces, such as the 40mm-wide GSAR (General Search & Rescue) watch. I think Marathon got all the details correct on the 36MM Arctic MSAR Auto and, for anyone wanting a real professional/military-grade tool watch with a Swiss Made automatic movement inside, isn’t going to find a better value elsewhere for this size watch. Price for the Marathon 36MM Arctic MSAR Automatic reference WW194026-WD in the strap is $850 USD, and price for the reference WW194026-BRACE-MA-WD on the matching steel bracelet is $1,070 USD. Learn more at the Marathon website here.