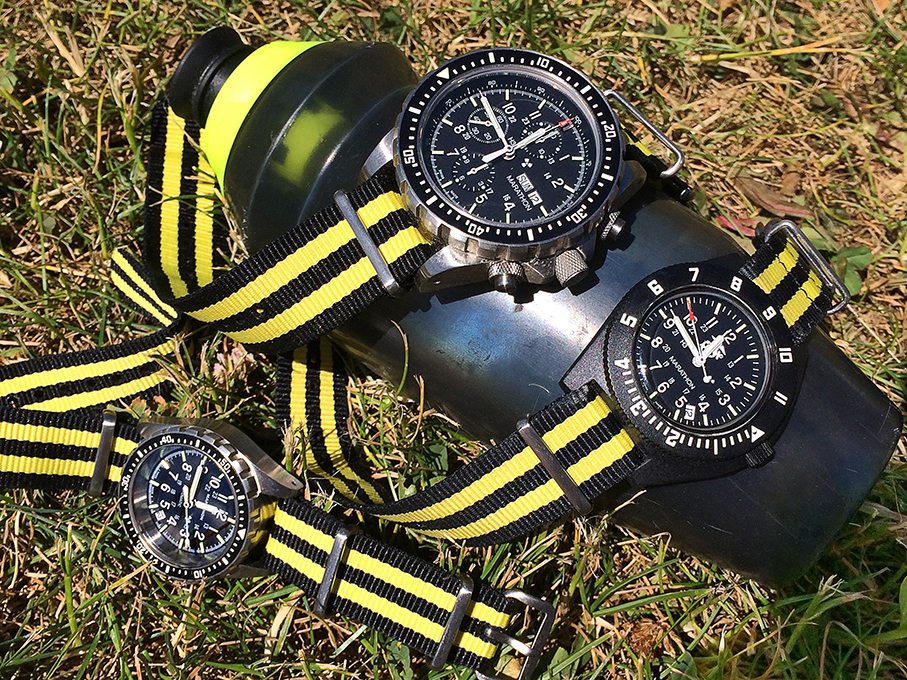 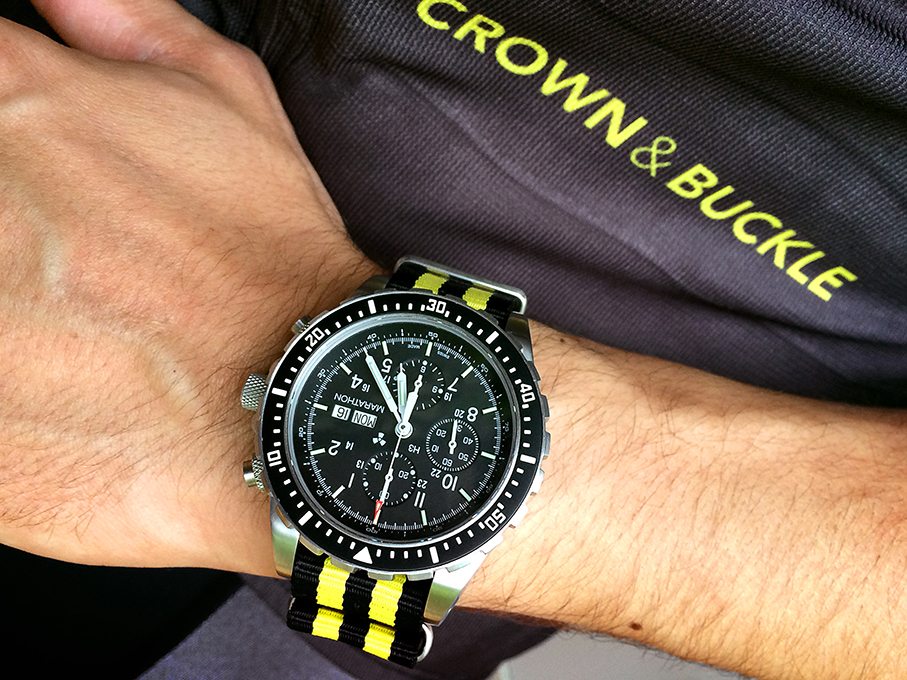 As some of you may well remember, Marathon Watch was kind enough to sponsor my cycling team “Time For A Cure” for the 2016 Ride To Conquer Cancer along with Crown & Buckle. Our six-person team raised $27,514 for cancer research, and we couldn’t have done it without our colleagues, family, and friends within the watch community. 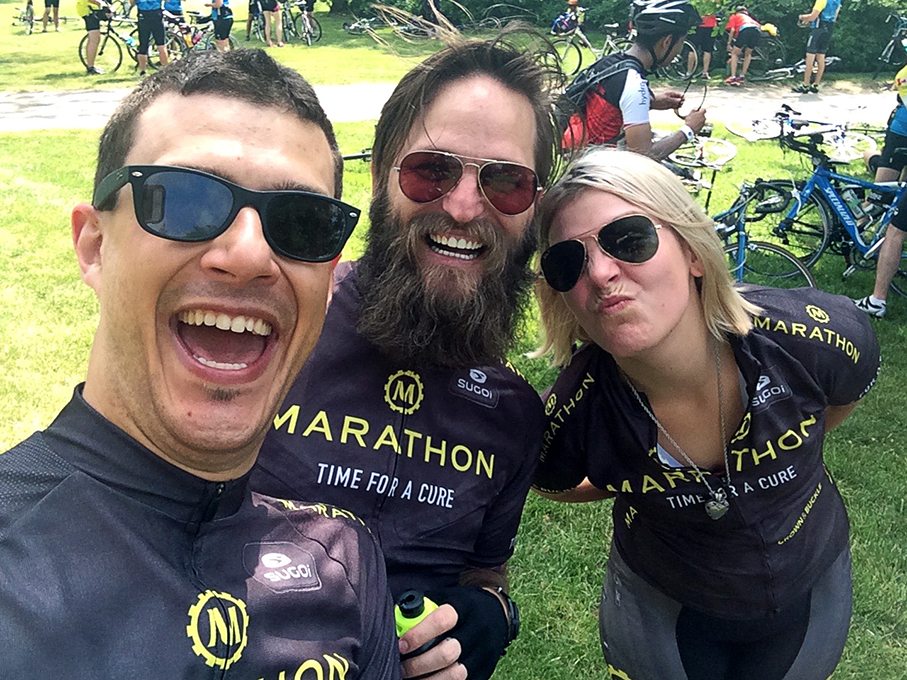 Myself, Cory, and Nicki were the three team test-pilots for the watches featured in this article.

As part of our sponsorship, we took three popular Marathon watches and put them to the test during our training season and eventual 215km ride. Those three watches were the Marathon Pilot’s Chronograph CSAR, the Marathon Medium Diver Automatic, and the Marathon USMC Navigator Quartz, and we definitely put them through the paces. 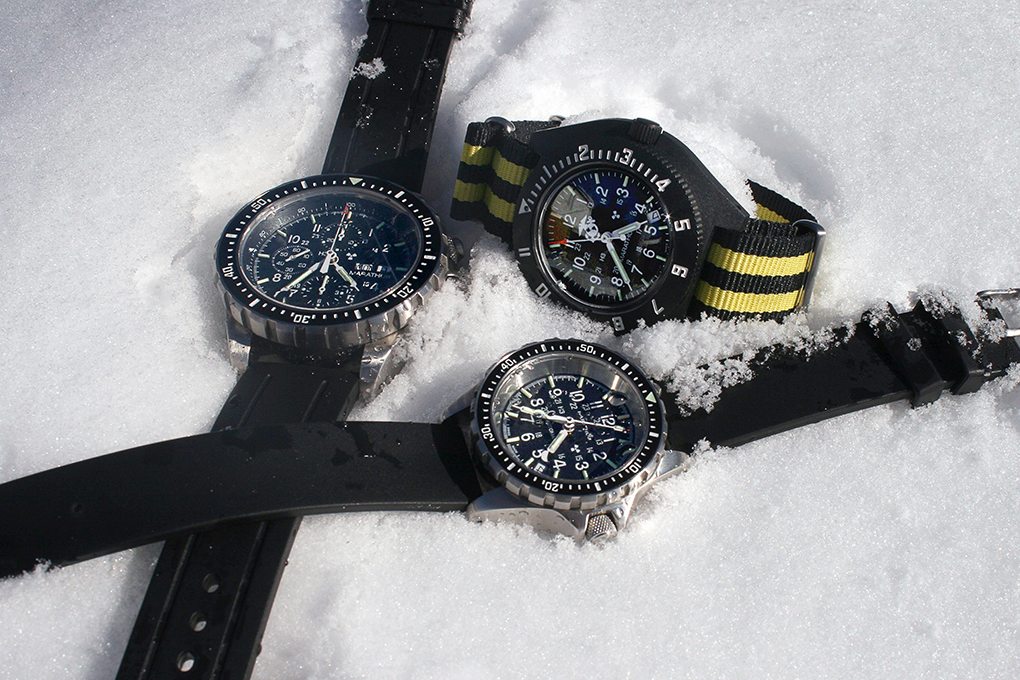 Why use cycling as a stress test for military watches, you ask? Well, on the practical side, we knew that training for the ride in Canada would provide some interesting conditions. In March, we would have temperatures around the freezing point, about 0ºC to 4ºC on average. We would most likely get rained on when May rolled around, and then cooked in the humid Southern Ontario summer.

Aside from the weather, we would also be dealing with hazardous roads, potholes, and plenty of other opportunities to bang these watches around. Since these are real military watches, we figured they’d be more than ready to handle the abuse that three people in Lycra shorts could dispense. Right? 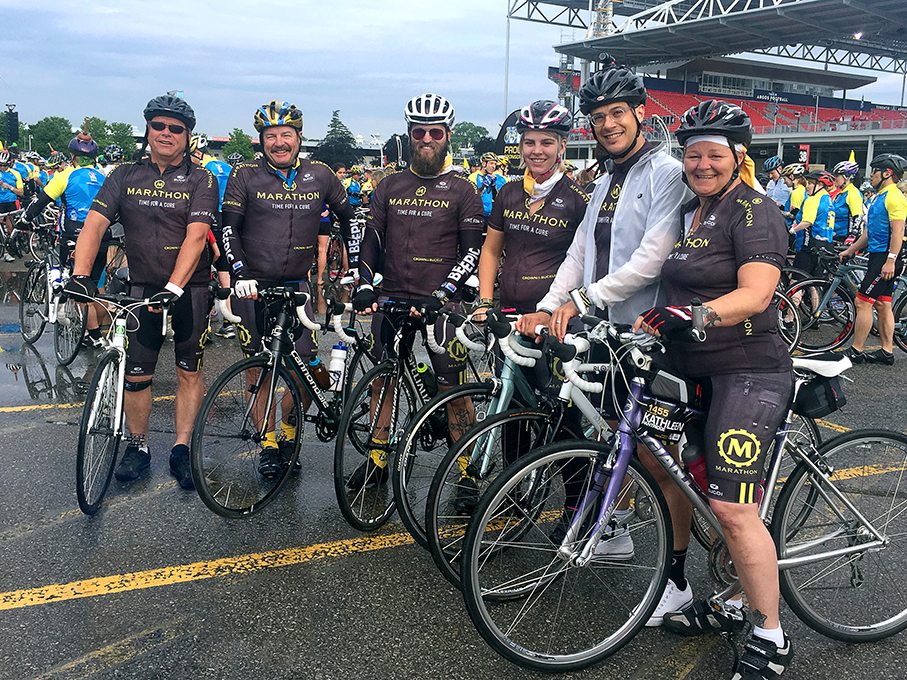 The entire Time For A Cure team gets ready to set off from Exhibition Place in Toronto Ontario.

Well, we thought so, but the way many people treat their tool watches nowadays (like delicate flowers) we figured it would be interesting to demonstrate these watches being used in a way that could be actualized by other readers. I mean, really, most people who wear pilot watches will never fly a jet, there are plenty of land-locked diving watches, and only a handful of people have ever set foot on the moon. 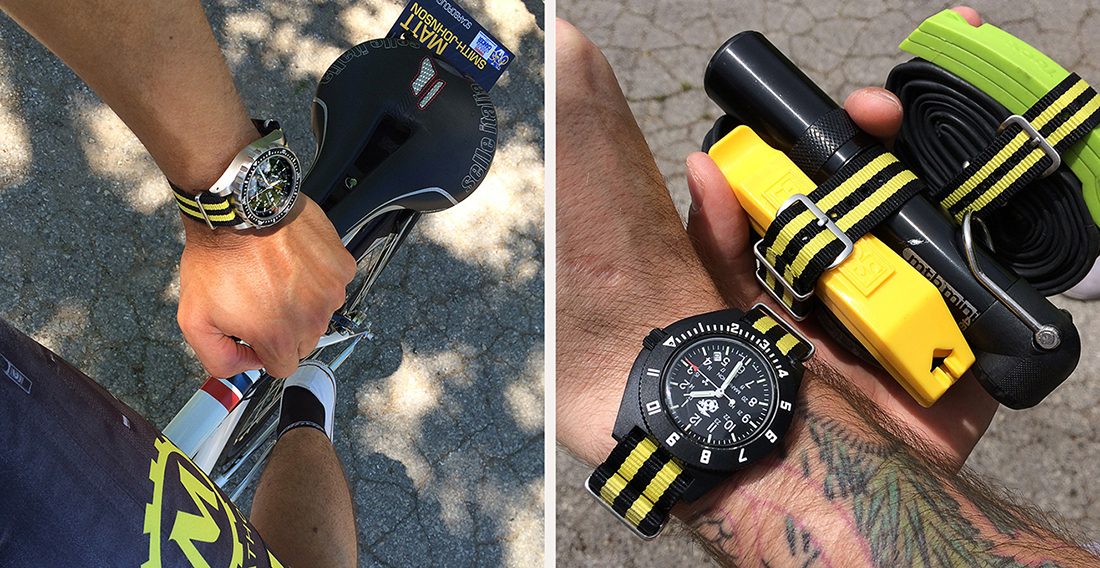 That isn’t to say there is something wrong with the “fantasy” element of watch ownership — we all buy watches that represent something we admire, whether or not we plan on being the next Buzz Aldrin. It’s part of what makes watches entertaining.

No, I just figured that perhaps I could explore an alternate way to purposefully use, and enjoy, a military watch. A way that doesn’t require the nerves of steel it takes to risk being shot at, y’know? 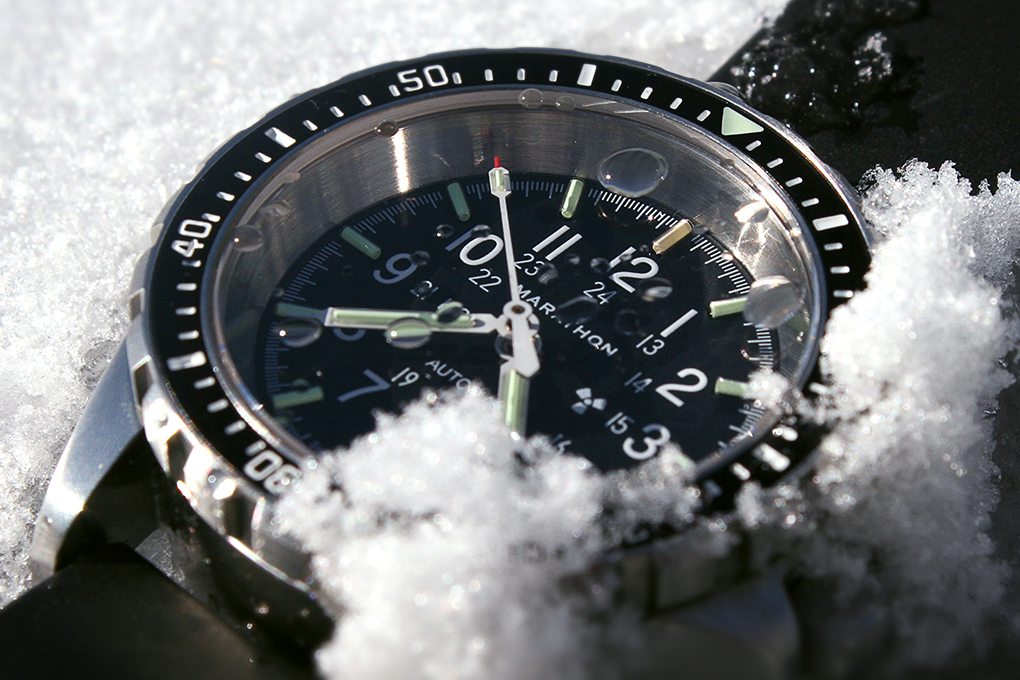 At the start of the season, we have frigid temperatures around the freezing mark. It was cold enough that a few of our training rides were snowed out completely, and here is where we started to realize a place for Marathon Watches in the world of inclement athletics.

Anyone who cycles or runs is probably familiar with apps like Strava that time and track your outings. I had been using this app on my phone, which was tucked close to my body and protected by multiple layers of winter riding gear. My Marathon CSAR was worn on the outside of my gear so I could time my 50km pre-planned route, and I trusted my Strava app to calculate my average speed. Well, at the 25km halfway point, I realized my phone was dead. Not because I forgot to charge it, but it was too cold to maintain power. The CSAR? Alive and well. And, since I knew I was at the 25km mark, I could easily use the time captured by the chronograph to calculate my average speed (around 21.5km/hr). 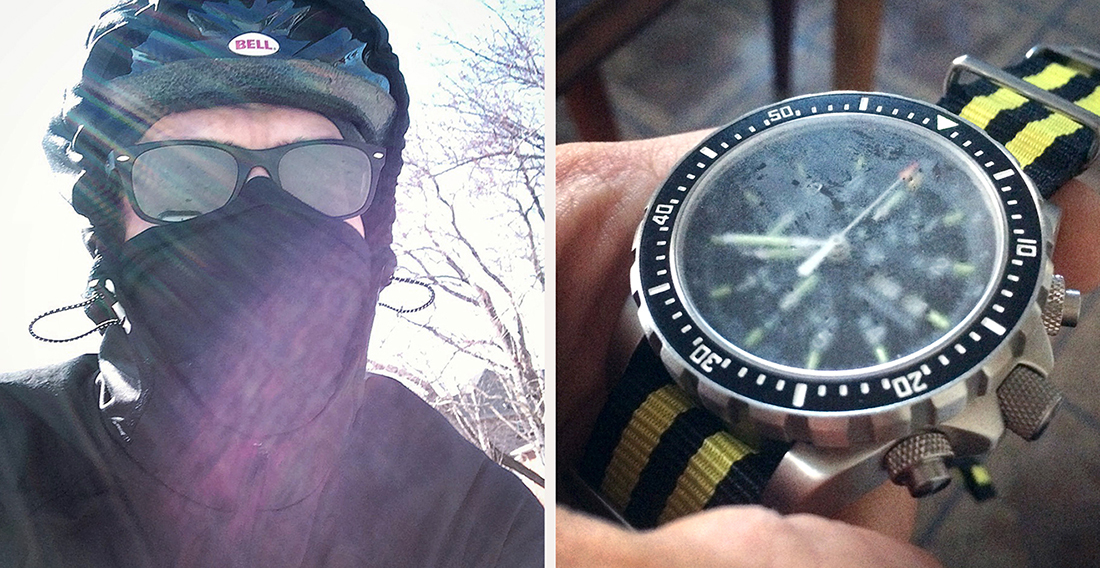 Some training rides got rather cold, and on this outing it was cold enough to frost up the dial of the Marathon CSAR.

Also worth mentioning is that the Marathon Pilot’s Chronograph Search and Rescue has a decimal minute chapter ring outside of the standard minute track. This gives you the ability to quickly calculate that 18 seconds = 0.30 minutes, or you can use it to calculate that 25 minutes on the chronograph subdial = around 0.415 hours. So, 25 minutes is actually 0.41667 hours, but you can get close really quickly – and if you need to make snap decisions based on that kind of information, this would be helpful. 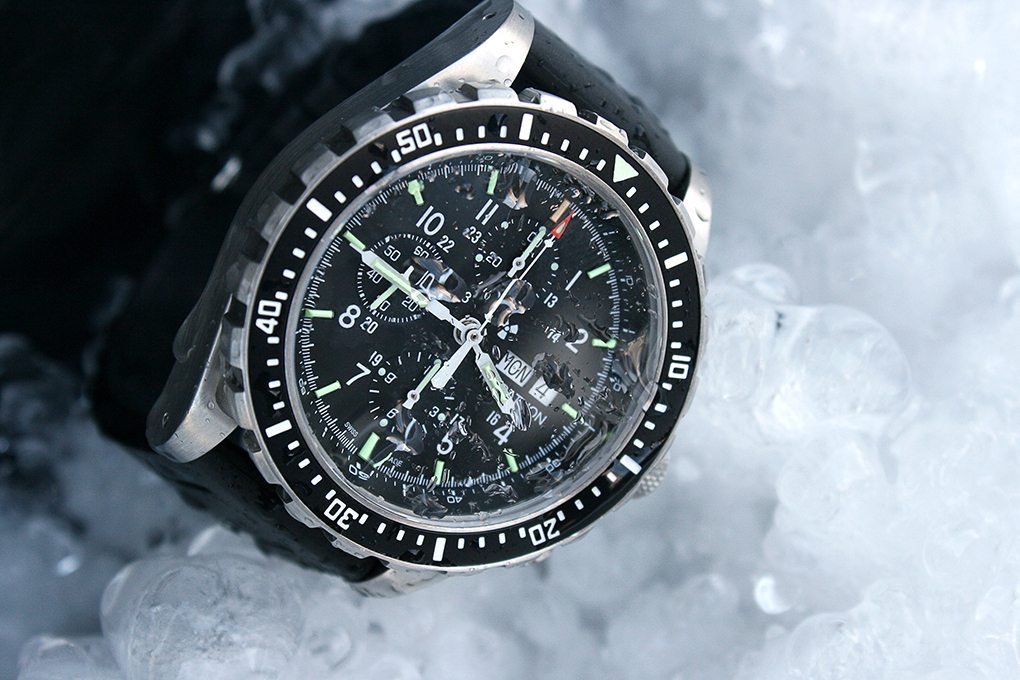 Another thing I found useful on the Marathon CSAR was my ability to set the bezel to my departure time, so I could also know how long a ride was including any breaks or stops. This made it easier to plan for future team training rides as we could determine that on a 100km ride, spending 4.5 hours on the bike would actually take around 6 hours including breaks and stops. I know that this is not the intended use of a uni-directional bezel, but it worked. It was also starting to look like mechanical watches were actually becoming more of a useful cycling tool than we had anticipated.