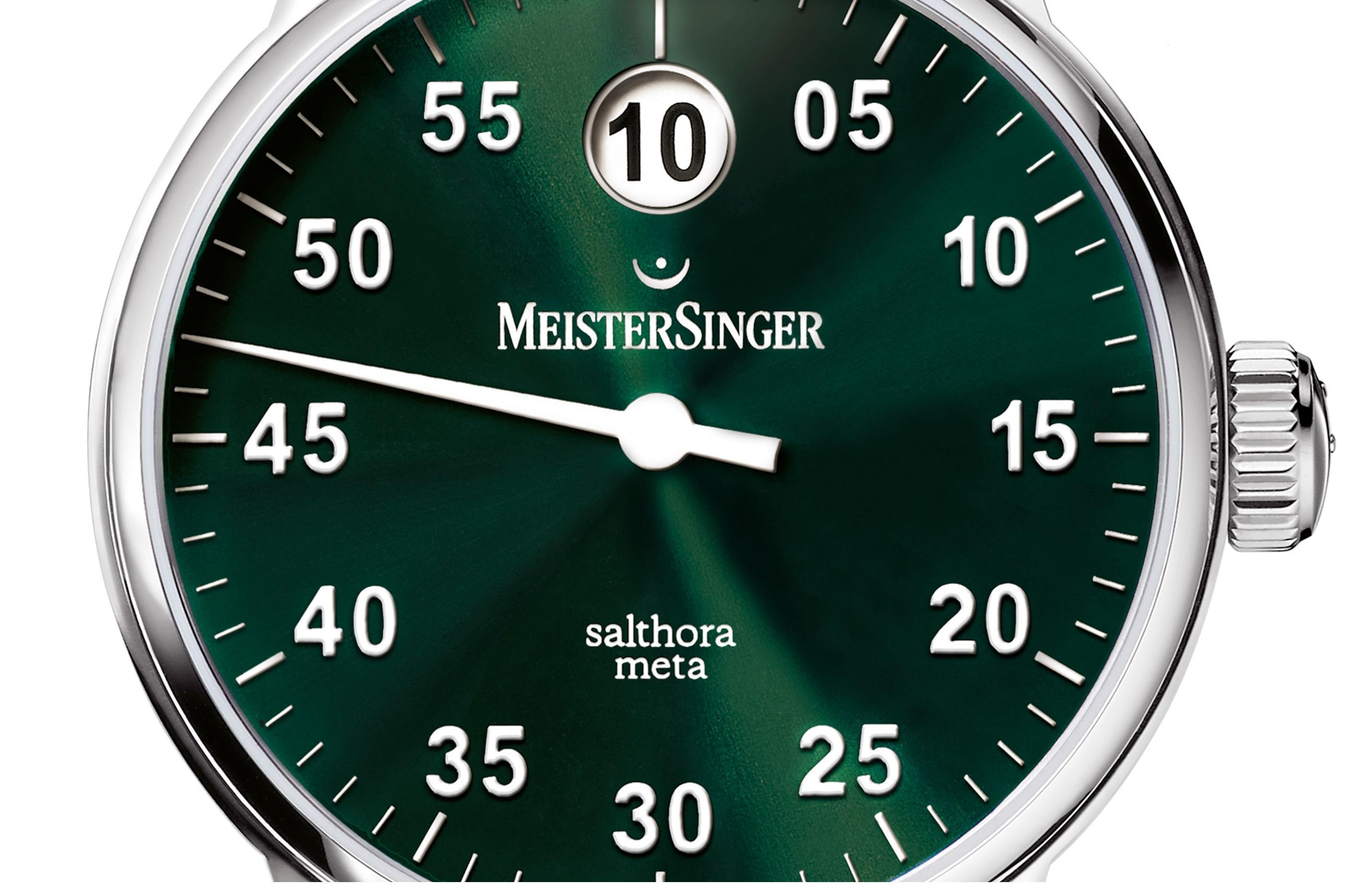 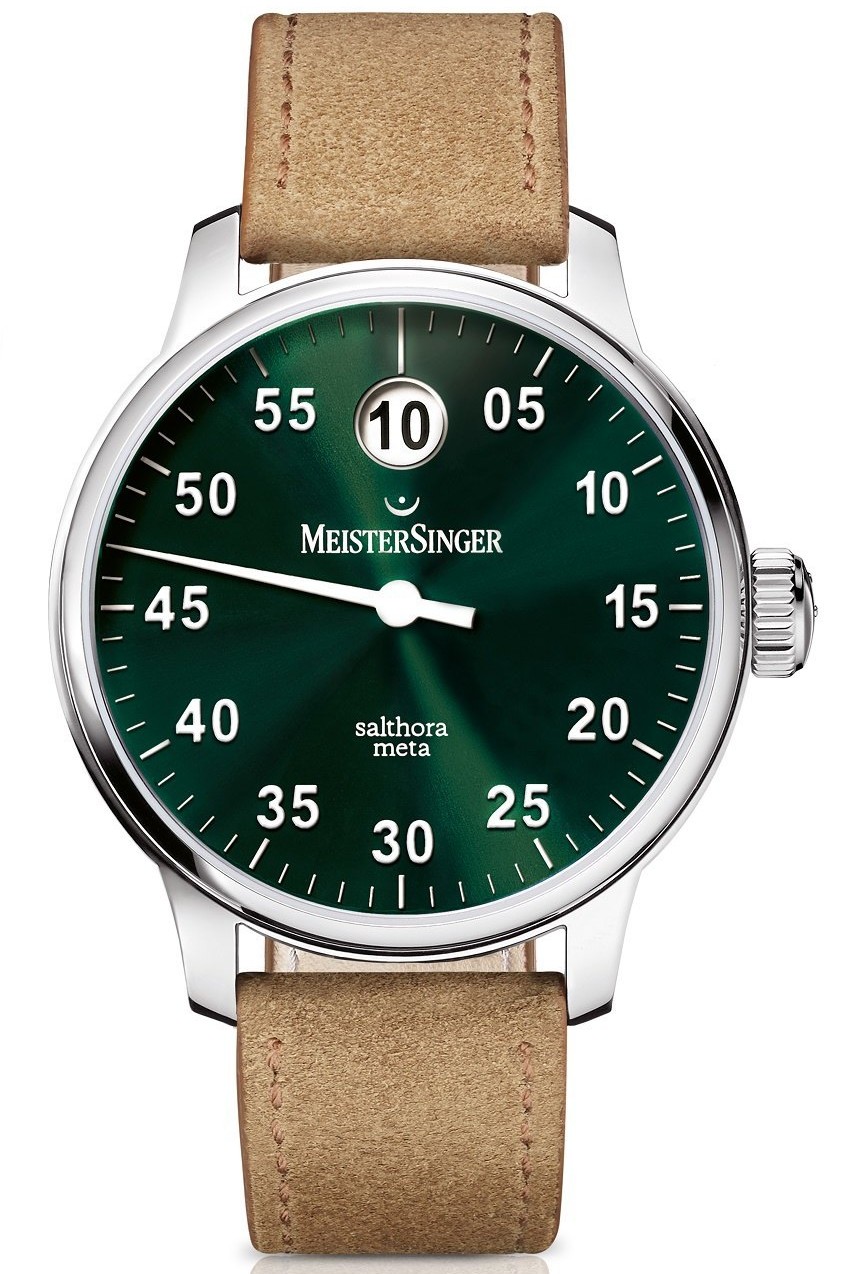 Easily identifiable and differentiable designs are one of the keys to a model’s – or rather, an entire brand’s – success. If a brand can forge a cast-iron USP (unique selling proposition), it’s got a pretty good chance of finding a foothold in the market. For German brand MeisterSinger, their reputation as a “uni-hand” brand has won them many fans. However, with the MeisterSinger Salthora range, we saw an evolution of their design principles, and the latest addition to that collection is the MeisterSinger Salthora Meta watch. The MeisterSinger Salthora Meta is a bit larger than its parent line, but uses an identical design. Along with the release of four core models, a special edition green dial for Harrods of London has been produced. The green dial variant is available from May 1st, 2015, and features an automatic movement listed on MeisterSinger’s official website as an ETA 2824-2/Selita SW 220-1. 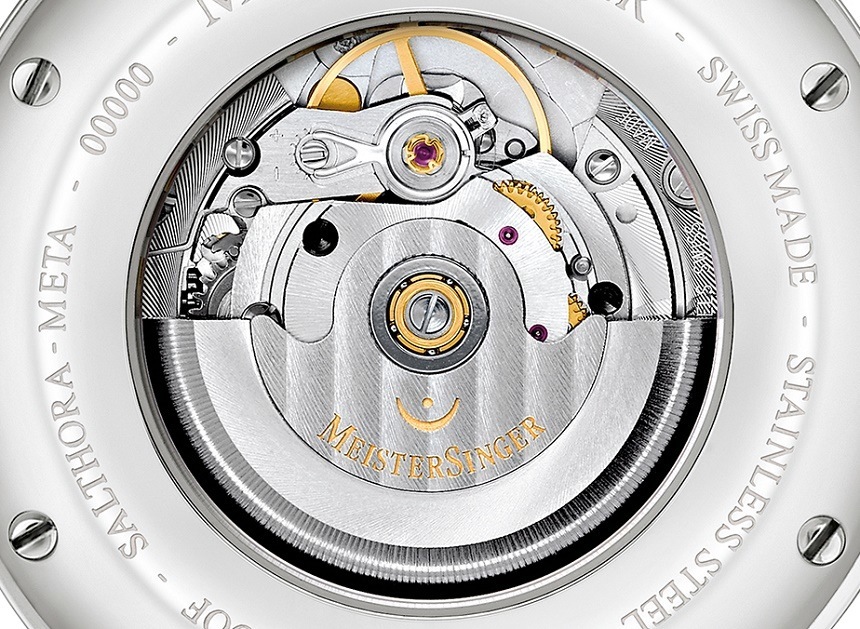 When it comes to design briefs, MeisterSinger’s was always pretty straightforward: one needle-like hand with a counter-poise, 144 indices on the dial, a balanced dial with double digit markers (01, 02, 03 instead of simply 1, 2, 3, for example), and a domed sapphire crystal. Adhering to these codes outlined by the brand’s creator Manfred Brassler earned MeisterSinger a strong reputation, but such narrow parameters were kind of limiting. Hence the birth of the Salthora range. 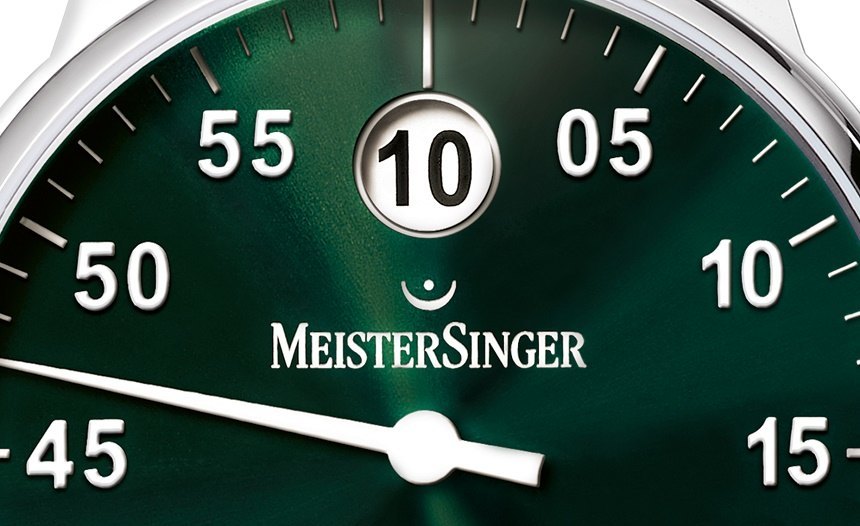 A single-handed watch is great – it looks like some crazy aviation instrument or archaic measuring device, like a piece of functional history strapped to your wrist – but it means you can’t get too creative without effectively “selling out.” Normally, the only hand on a standard MeisterSinger is the hour hand, which rotates once every 12 hours. 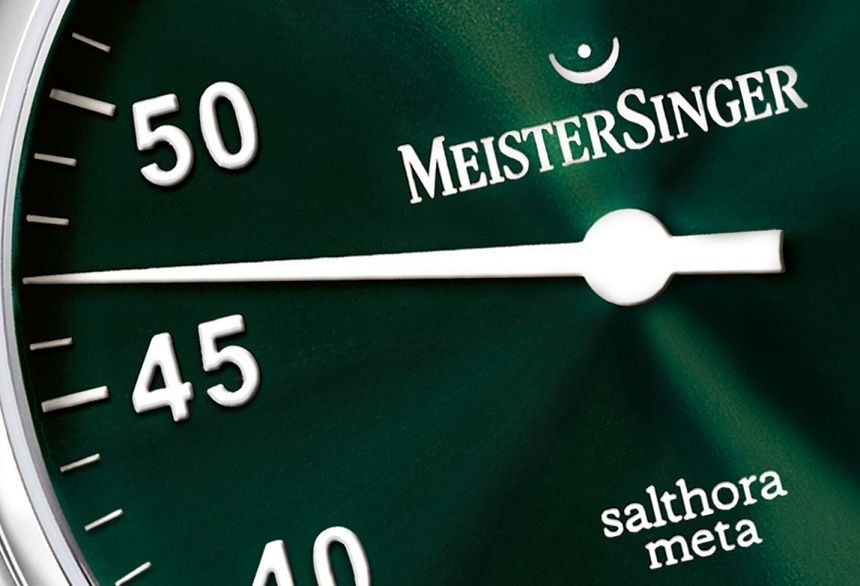 Basically, this is just a normal hour hand with no movement-level modification made at all. Its not even a 24 hour dial. It’s just a clean and simple 12 hour indicator. The 144 indices indicate five minute points around the edge of the dial. The needle hand is styled accordingly to make reading such tiny increments possible. With the MeisterSinger Salthora range, however, the principles are cleverly adjusted to harbour a new functional element. 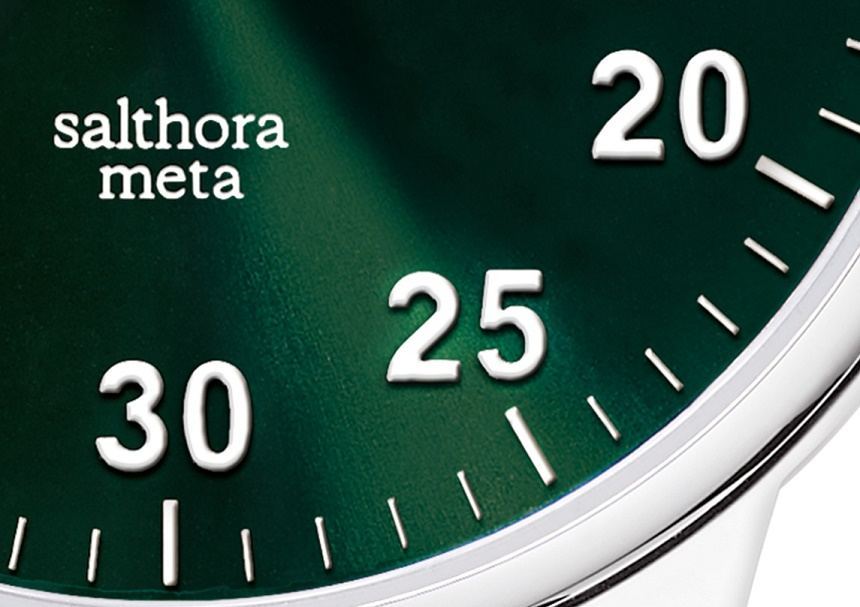 Gone is the hour hand entirely. In its place is a minute hand, in the same style as its predecessor. By dropping one hand for another, MeisterSinger can perpetuate the uni-hand branding. But where have the hours gone? At 12 o’clock there is a window, through which a jumping hour disc can be read. The time is displayed in double-digit Arabic numerals on the jumping hour disc, while the minutes are now printed on the dial, still in double-digit format. The domed sapphire glass is also retained, meaning the only one of the four design principles not to survive the Salthora range, is the 144 indices. Instead, we have a much more digestible 60 markers, which are notable for their excellent application and legibility. If you really study the printed markers, you will see that they are actually raised off the dial as opposed to just being flat pad-printed. This adds a nice dimension to a dial that is, by design, very plain. 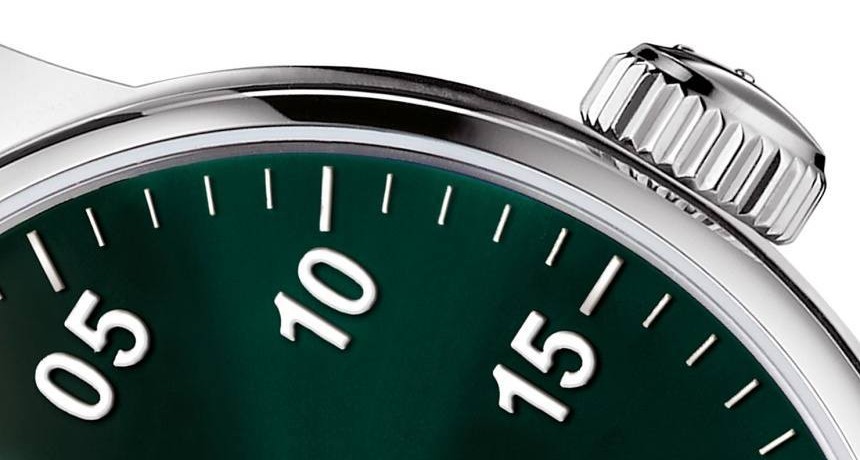 But it is the details of the MeisterSinger Salthora Meta that reveals its beauty. There is a reason why the company, based in the Westphalian city of Münster, has won 17 design awards since its foundation in 2001. The 43mm case unites the Salthora design with the case size of the original single-handed range. Obviously, the advantage of having a large dial to play with when you’re trying to cram 144 indices onto it are vast, but when releasing the Salthora original, which only featured 60 indices, the designers felt that scaling the case down to 40mm made sense to retain a more familiar ratio.

However, by bringing the MeisterSinger Salthora Meta up to 43mm wide, the designers have afforded themselves a great deal of blank space on the dial, which really enables them to broadcast the humble values of the brand. This is not a name associated with glitz and glamour. MeisterSinger like to do things quietly, with as little fuss and clutter as possible. And does it suffer for it? I don’t think so. In my opinion, it really benefits from the minimalistic design. The single hand is a centrepiece, displayed ever-prouder in a more generous frame. This watch may not be true to the original design brief, but it is an excellent advert for the brand’s essence. 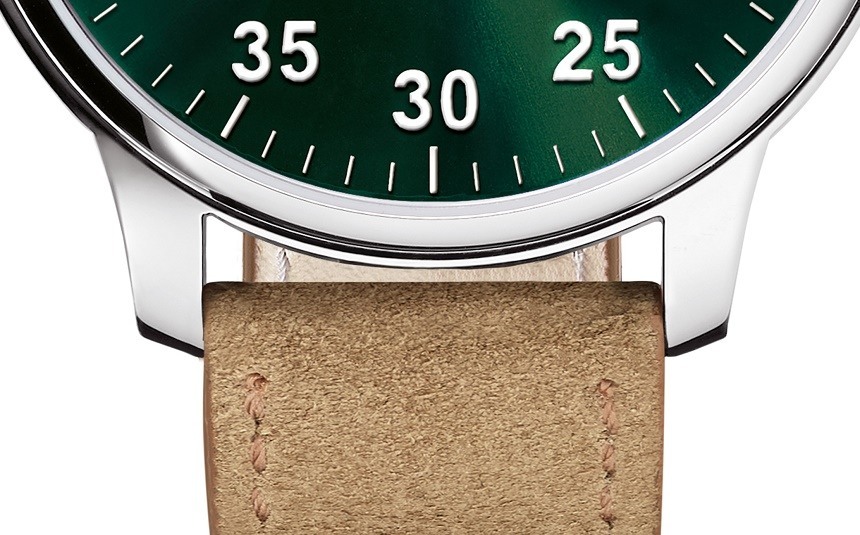 And that green dial! With a sunburst finish, the dark green dial and simple white integers really marry well with the beige leather strap that features a folding buckle. The automatic movement is visible through an exhibition case back. The base calibre may not wow you, but it does appear to be a relatively nicely decorated version from the press release photographs. Additionally, the dial-side modification enabling the jump hour is really cool and a nice talking point. 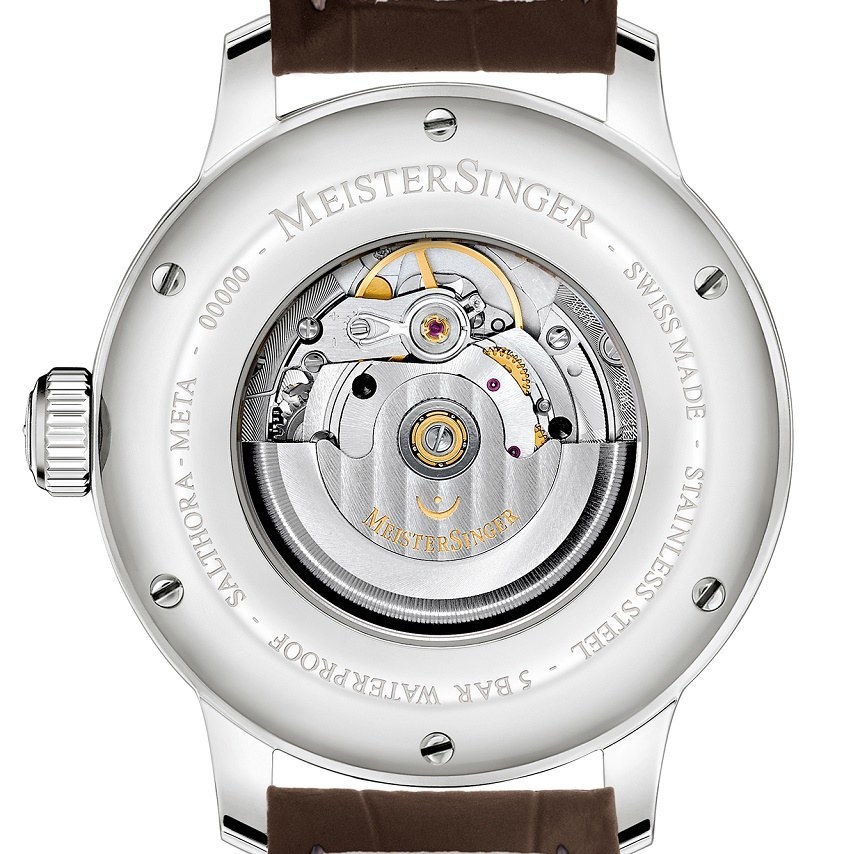 The MeisterSinger Salthora Meta with green dial is exclusively available from Harrods, with a price tag of £2,375, but there are four core colourways to choose from if you can’t make it to the store. There is a white dial/black strap, pale brown dial/dark brown strap, black dial/black strap (with scarlet hour markers, minute hand, and strap stitching), and sunburst blue dial/tan brown strap. These variants are priced at €2,598, which equates to roughly £1,915, making it considerably cheaper than the Harrods variant. MeisterSinger plan on releasing another special edition watch for Harrods later in the year. The Circularis Gold in 18ct rose gold will be released with a white dial or a blue dial, with 24 of each available. The watch will also feature a twin-barrelled calibre developed by MeisterSinger. Check back here for more details later in the year. meistersinger.net