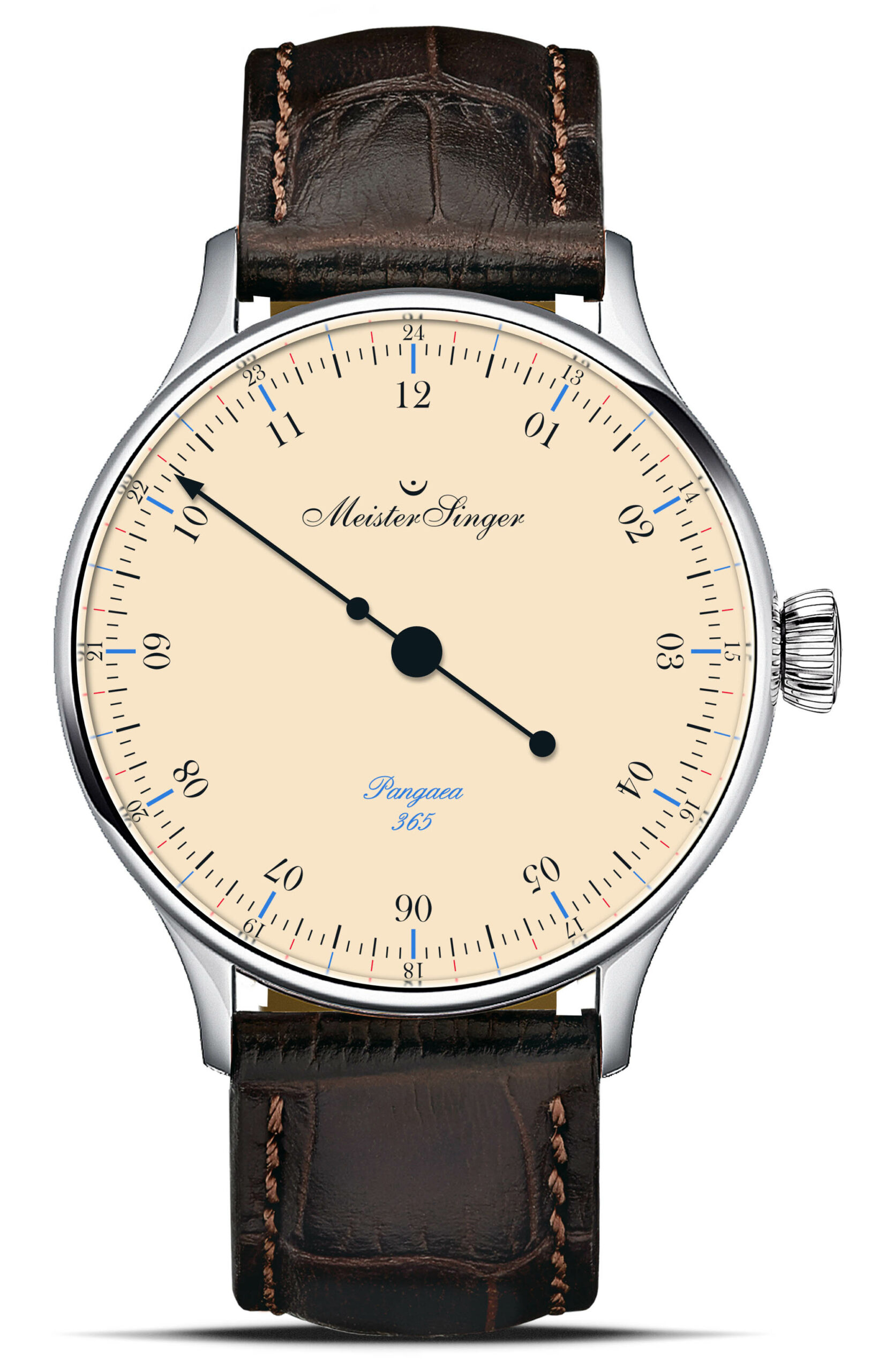 Despite the fact that the brand produces various models with a handful of different complications, ranging from calendar displays to power reserve indicators, all MeisterSinger watches are united by their single-handed designs that have become the Münster-based company’s signature aesthetic. Having one centrally mounted hand display both the hours and minutes creates an incredibly clean and almost instrument-like appearance, and the new MeisterSinger Pangaea 365 leans into this design ethos, drawing its inspiration from the very earliest days of watchmaking to create an exclusive limited-edition watch with a classic overall appearance. 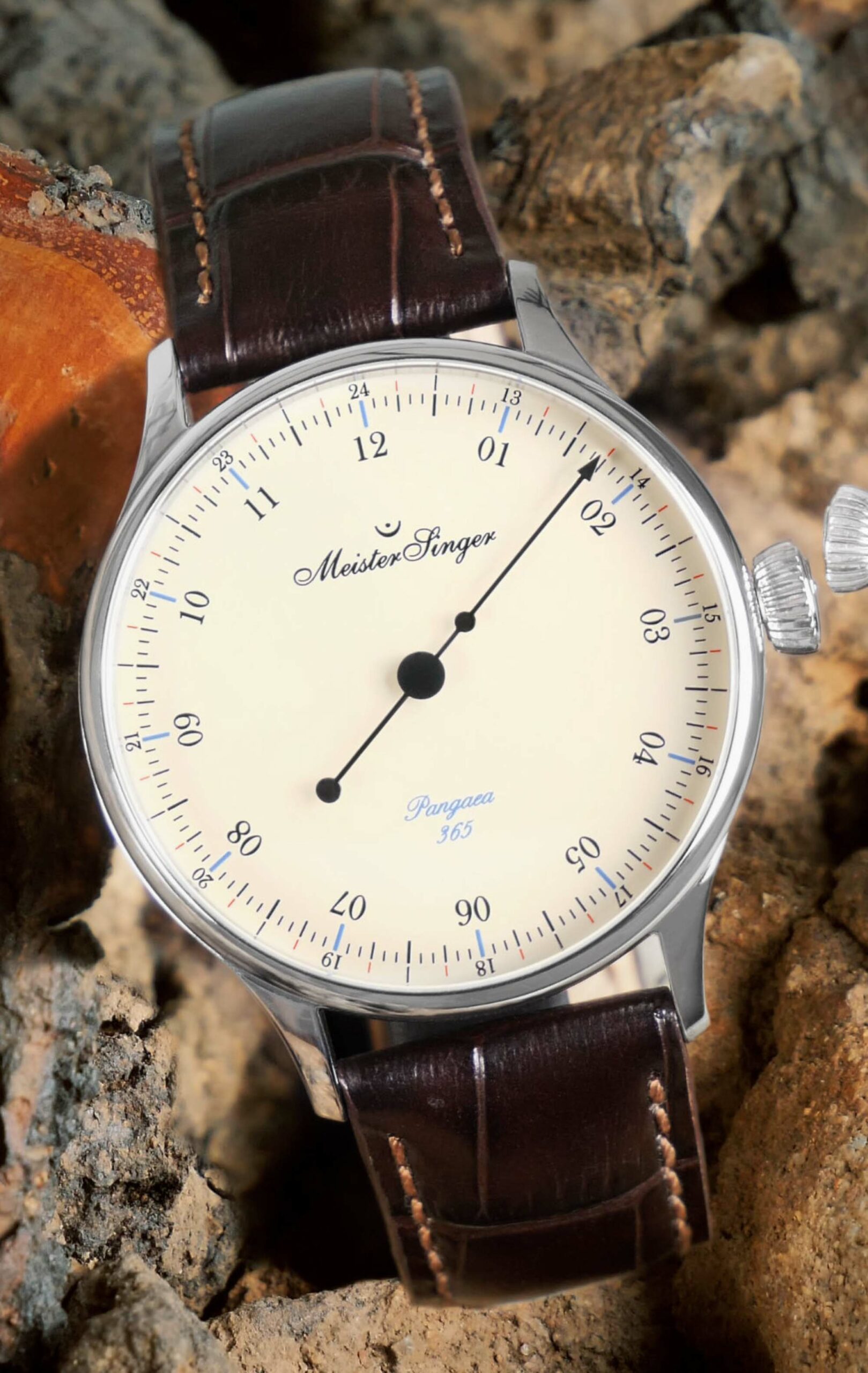 The case of the MeisterSinger Pangaea 365 measures 40mm in diameter and is crafted from stainless steel with a glossy high-polished finish. With a round shape, thin bezel, and traditionally proportioned lugs, the case of the Pangaea 365 offers a very classic and familiar overall profile, and it even features a fluted winding crown at 3 o’clock that offers access to its movement. A scratch-resistant sapphire crystal protects the dial side of the watch, while another one occupies the center of the watch’s exhibition-style caseback, which is attached by six screws and offers a view of the self-winding mechanical movement within. The push-pull crown and screw-on caseback work together to provide the Pangaea 365 with 50 meters of water resistance, while the perimeter of the caseback features an engraving to denote the watch as a limited edition of 200 pieces. 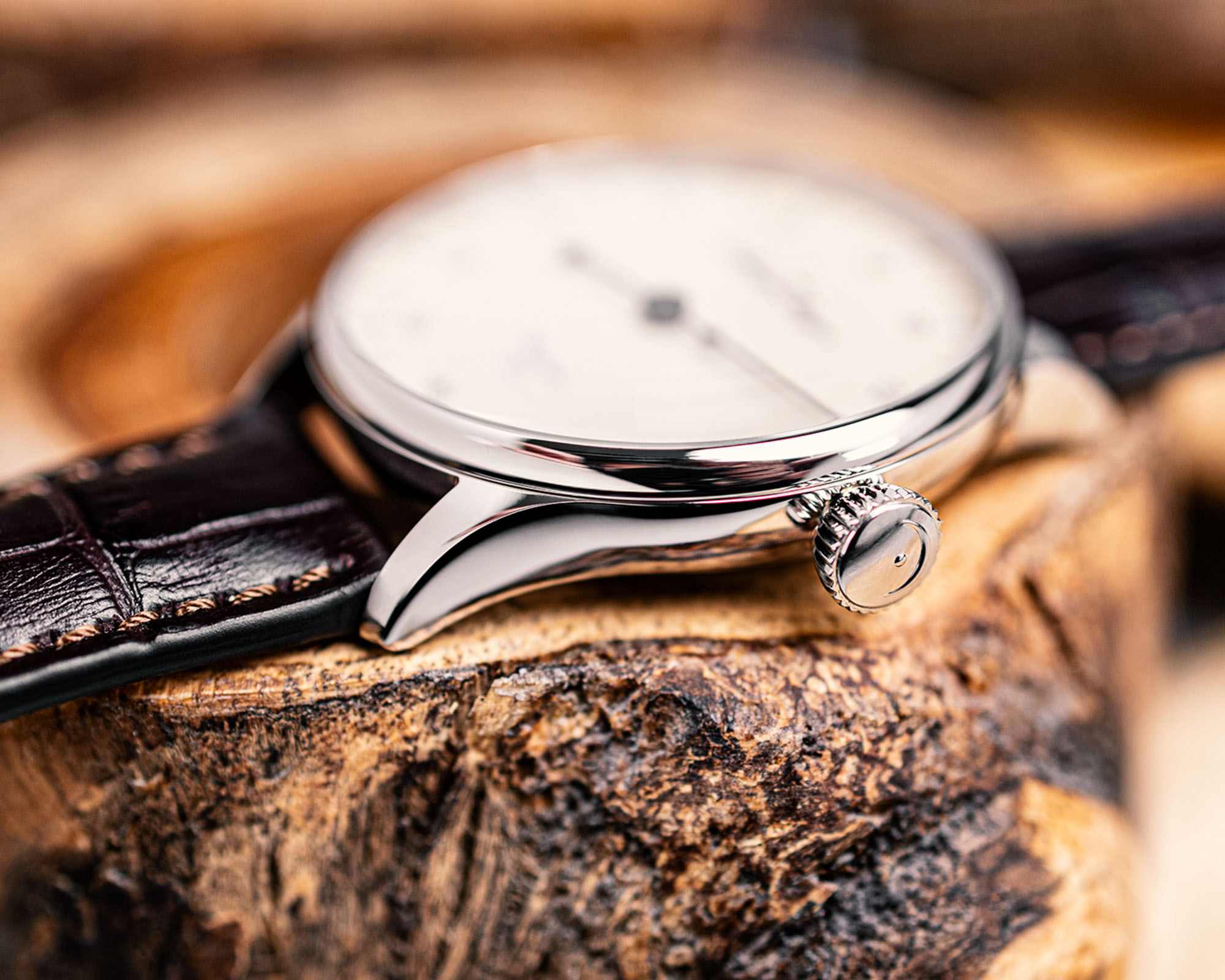 Without a doubt, the dial of the MeisterSinger Pangaea 365 is its single most defining feature, and it offers a retro-inspired design with a clean and classic overall appearance. The warm ivory-colored surface is one of MeisterSinger’s signature design features, and it serves as the backdrop to showcase a fine serif typeface in black that is punctuated by small red and blue embellishments throughout the hour markers, minute track, and “Pangaea 365” signature on the lower half of the dial. Sitting at center stage is a long and thin needle-shaped hand in black that complements the printing on the dial and creates a strong contrast against the ivory-colored surface. Additionally, given that MeisterSinger’s single-handed approach to displaying the time is contingent on the hand being able to clearly indicate its exact position against the scale printed along the periphery of the dial, the tip of the hand on the Pangaea 365 extends all the way to reach each of the five-minute markings within the dial’s scale. 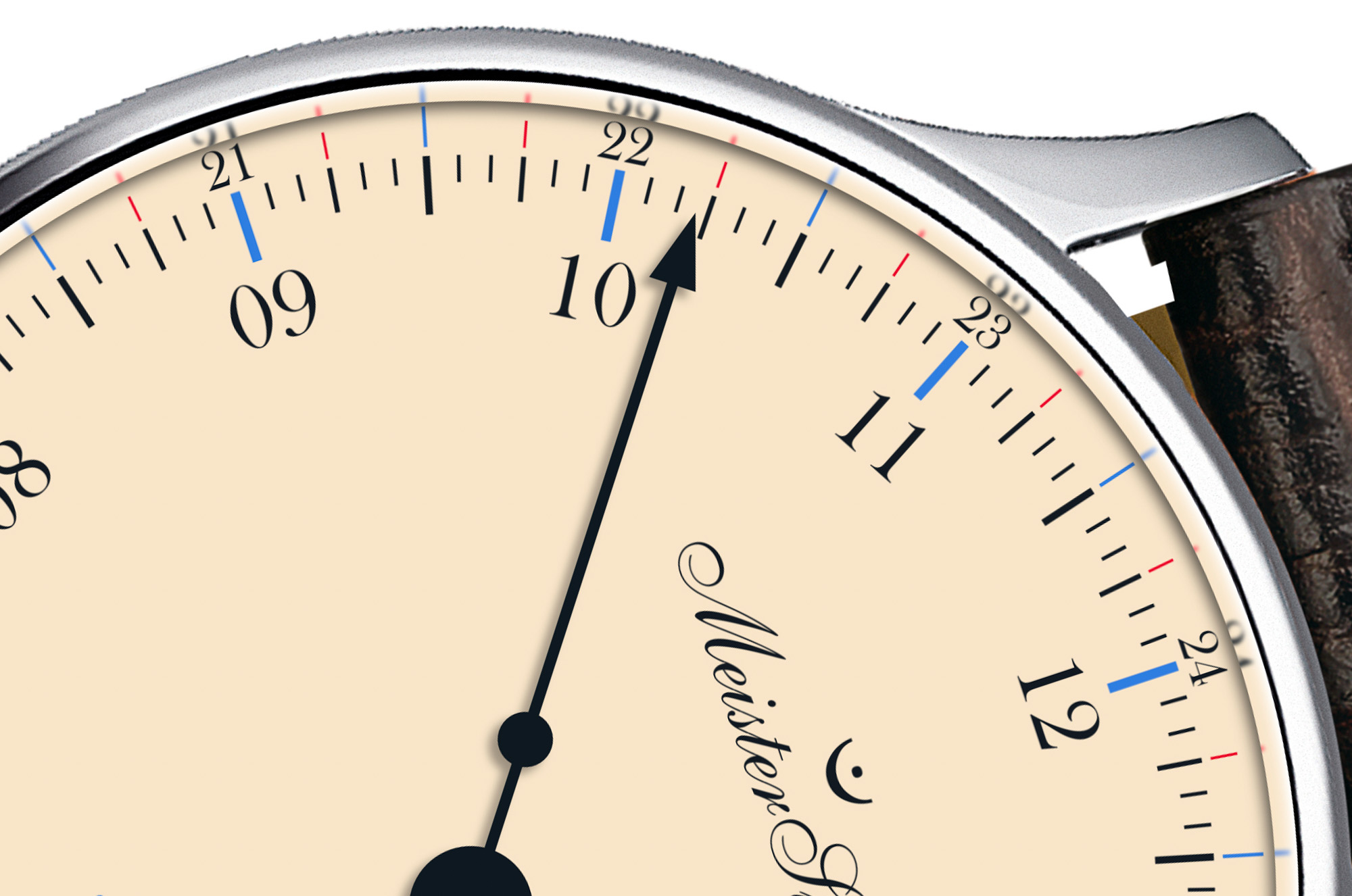 Powering the MeisterSinger Pangaea 365 is the Sellita SW200 automatic movement, which is modified to accommodate the brand’s signature single-handed configuration. As the movement is still a SW200 at its core, it runs at a frequency of 28,800vph and offers a power reserve of approximately 38 hours. Additionally, while the watch itself offers an unconventional display, the movement powering it is very much a known quantity and offers reliable performance and easy serviceability. Completing MeisterSinger’s version of the Sellita SW200 found within the Pangaea 365 is a custom-decorated rotor that features the brand’s logo, while the watch itself is finished with a two-piece dark brown leather strap fitted with a stainless steel pin buckle. 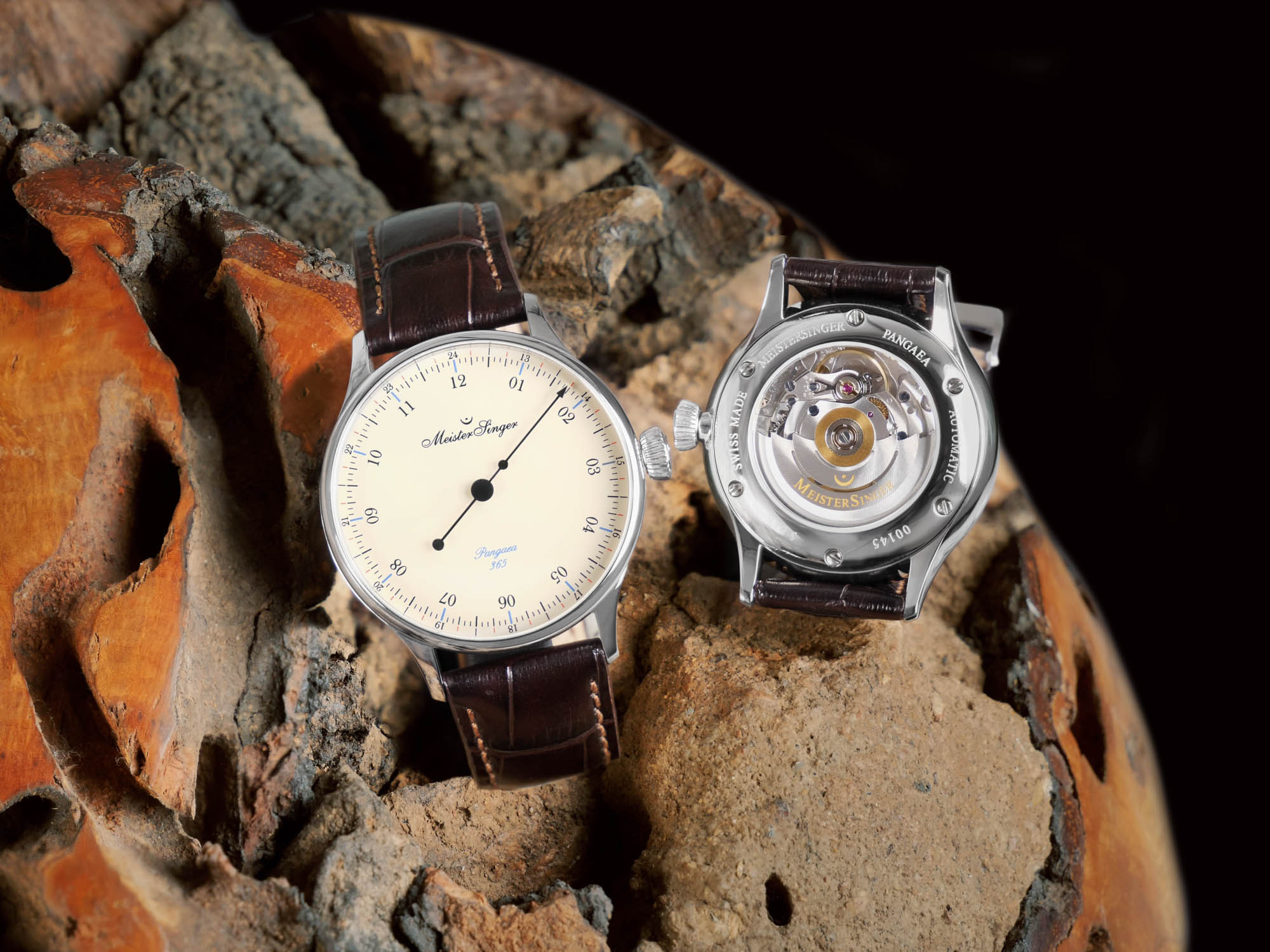 Production of the MeisterSinger Pangaea 365 will be limited to just 200 pieces worldwide, which makes it a proper limited-edition watch within an industry that frequently has limited edition models produced in numbers spanning thousands or even tens of thousands of examples. Additionally, with an official retail price of $2,099 USD, the Pangaea 365 is also positioned firmly on the more affordable side of MeisterSinger’s current catalog, despite its small-batch limited edition production. The Pangaea 365 will be available from official MeisterSinger retailers and from the company’s own website, but given its affordable price point and limited numbers, the model will likely be one that a lot of fans of the brand will want to add to their personal collections. For more information, please visit the manufacturer’s website.