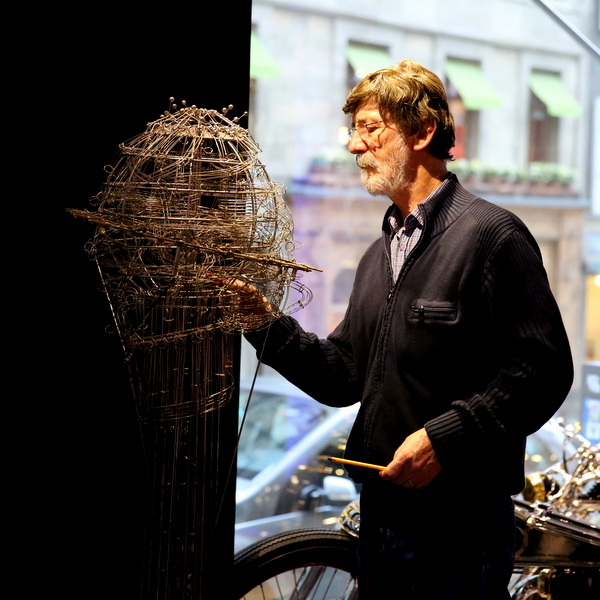 Miki Eleta Clocks And Mechanical Art At The MB&F M.A.D.Gallery 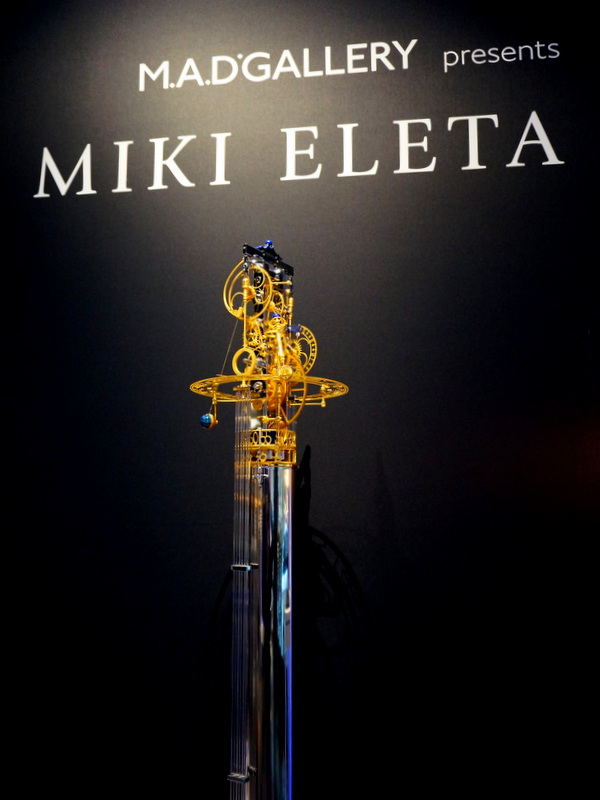 The M.A.D Gallery in Geneva while existing as the place to go to see the latest pieces from MB&F, is also a place where you can find unique “mechanical art” exhibitions. There is perhaps none more unique than the exhibition by clock-maker, Miki Eleta that was held to coincide with the week of SIHH.

Arriving at the M.A.D Gallery, I was confronted by a gallery space that had been transformed yet again, and this time into some kind of magical clock wonderland. Large clocks and clock-like sculptures were to be found at every corner, and the first impression of the pieces was of an overwhelming complexity arranged in a kind of organic beauty. 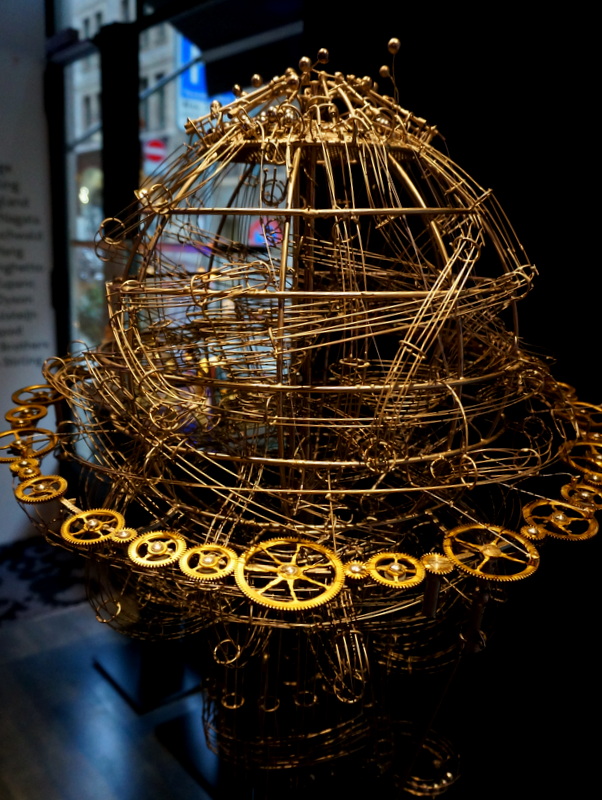 The first piece that caught my eye was the large, almost eye height kinetic sculpture that stood near the entrance. Named “Die Sieben,” it looks like a gigantic bee hive made out of sprawling wires. When the sculpture is put in motion, a mechanism brings ball bearings up from the middle and lets them go from the top, running into guided pathways made by the wires, and making a musical sound at the same time. From a purely aesthetic standpoint, this was easily my favourite piece for the musical sounds as well as for the pleasure of the ball bearings running randomly down the sculpture.

After this first impression, I was shortly introduced to the man who made all of these items; Miki Eleta, clock-maker extraordinaire and genius autodidact. Miki spoke no English, and I at first tried to communicate with him in my halting German. As he explained his pieces with the aid of a translator, there wasn’t much need to understand what he was talking about, since it was plain to see how the exposed mechanisms worked. What was more interesting  instead, was to see his enthusiastic gesticulations as he pointed out the most interesting parts of the mechanism. Miki you’ll find is a charmingly animated and well-humored man.

Now if you had met Miki without knowing anything about him, you would be greeted by a jovial and smiling man, eager for a laugh and a joke. Indeed his playfulness was wildly infectious and certainly something that you would not expect from a person who had created all the magnificent and beautiful clocks in the exhibition. Instead, one would most probably imagine a typical watch-maker, dour and serious, explaining the mechanism of his clocks without smiling. A personality type you encounter with perhaps too much frequency in the watch industry. 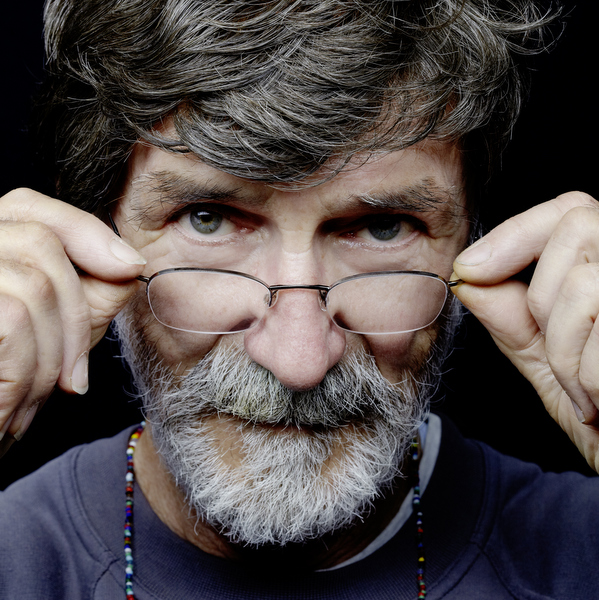 Then again, if you looked into Miki’s background, you will find nothing typical about it.

Born in Bosnia-Herzegovina in 1950, he came to Switzerland in 1973 in order to find work so that he could afford a flamenco guitar, the sounds of which had infected him in his youth. His first real job was in metal-working, which led to antique restoration, then to working with clocks, then watches, then to kinetic sculptures.

It seemed quite clear that the direction he was going in was geared towards creating art pieces and nothing more. With a firm background in the aesthetics of his work, it took a certain event to push Miki into envisioning his pieces as both works of art, and of horological significance.

In the year 2000, after being questioned by a client on the mechanical precision of his pieces, he was determined to create a proper full-fledged clock. While he had the metal working skills and the aesthetic sensibility, he was missing a proper foundation in clock mechanisms. To this end, he sought out ACHI (Horological Academy of Independent Creators) member Paul Gerber to explain to him the inner workings of a clock.

That was all the push he needed, and twenty eight clocks later, Miki has created a breathtaking portfolio of work, showing a thorough mastery of many of the typical complications that we as watch-lovers know of. Some of the complications that his clocks feature include, retrograde hours and minutes, jumping hours, minutes and seconds, moon phase and zodiac signs, musical movement functions and the tourbillon.

This is all the more amazing when you realize that every single part of his clocks was made by him, working alone and single-handedly working out the processes required. With a non-establishment air about him, one would have to conclude that Miki Eleta is a true auto-didactic genius. 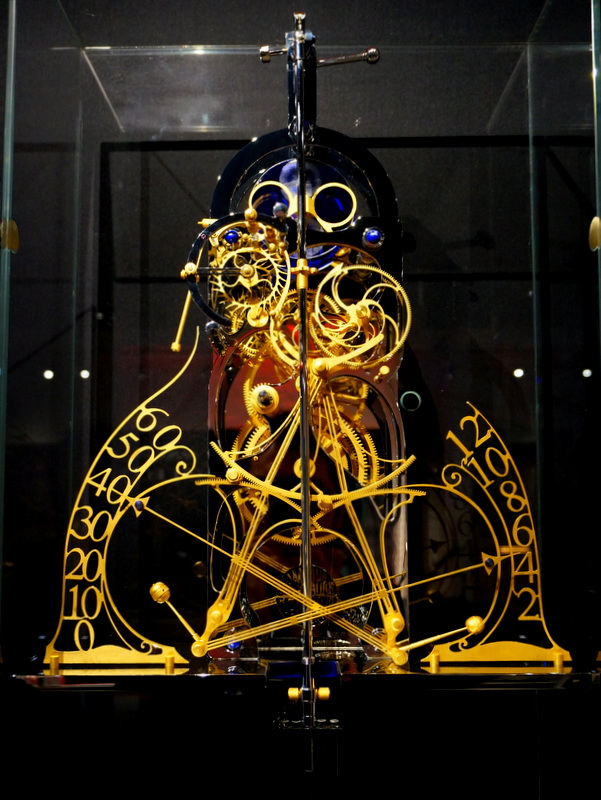 The show-piece of the exhibition, “Hippocampus” was clearly the star of the show. Standing at 2.8 meters high, it is the largest piece he has ever made, and comes with a self designed “Eleta Escapement” as he calls it. Complications within include retrograde hours and minutes, moon phase, and a musical movement that plays a melody that does that repeat itself in a hundred years. Truly a masterpiece, this clock is something that will inspire wonder to the lucky owner who can look at it everyday. Of course given the fact that this piece is the only one of its kind, and how amazing a presence it has, the price of CHF 150,000, while hefty, seems entirely reasonable. 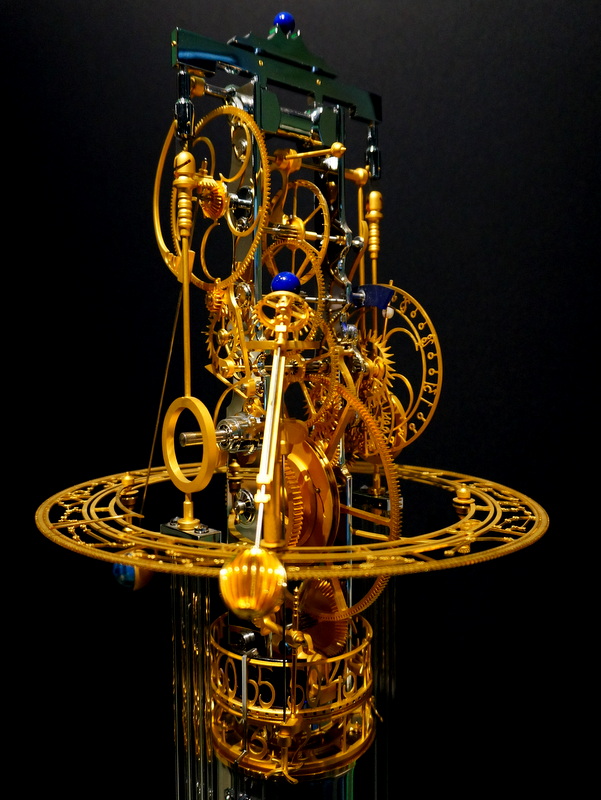 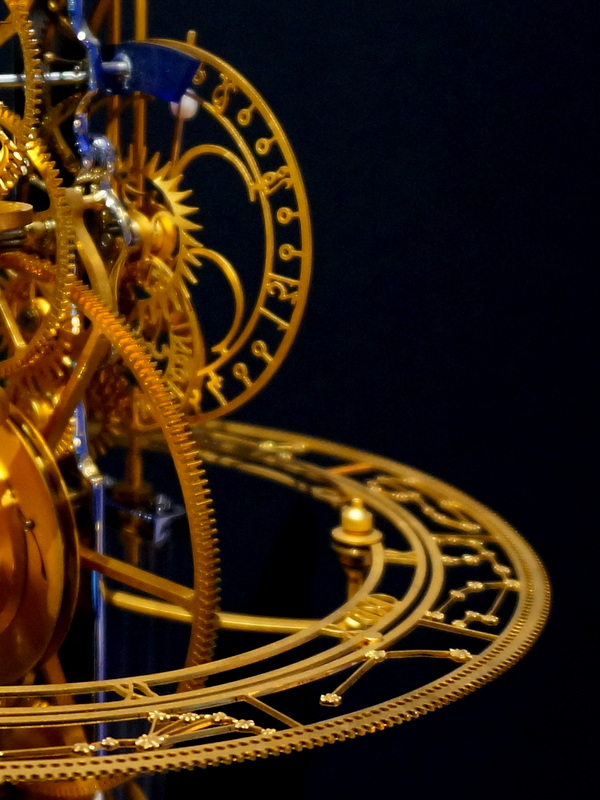 Another notable piece that I was shown was “La Luna”, which while not as large as “Hippocampus” is all the more charming because of the three dimensional way of telling the time. The base rotates once every hour, indicating seconds and minutes in the process. At first glance, this clock seems to be a bunch of gears arranged haphazardly. Look closer however, and you can plainly see the remarkable way in which order is claimed from the somewhat chaotic layout. 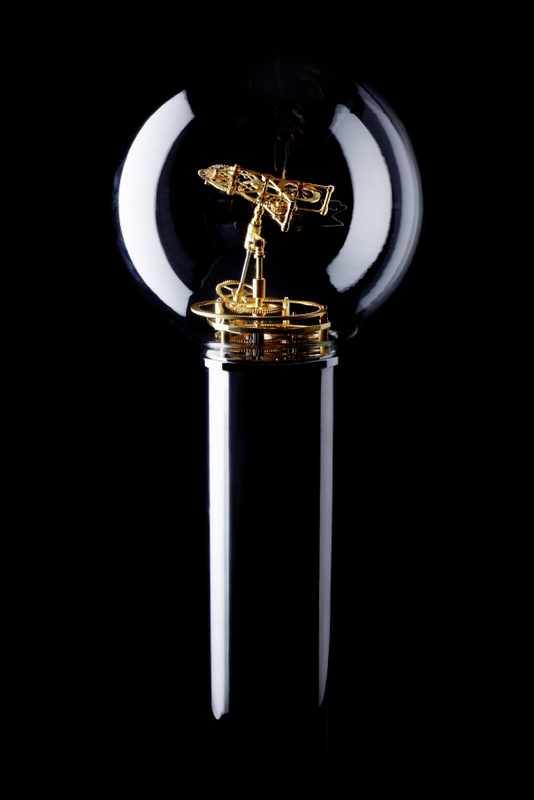 Another piece I enjoyed was “Continuum Mobile”, which features a tourbillon encased in a glass ball. If you’ve ever enjoyed looking at a tourbillon in a wrist watch, then you’ll enjoy this clock, as it is much larger and is plainly the main feature. Hour and minute indicators are built into the cage and the whole mechanism revolves inside the glass ball. This piece will endear itself very easily to the tourbillon lover, but it is not for sale. Pity as this is one piece that I can watch all day for the sublime dance of the movement. 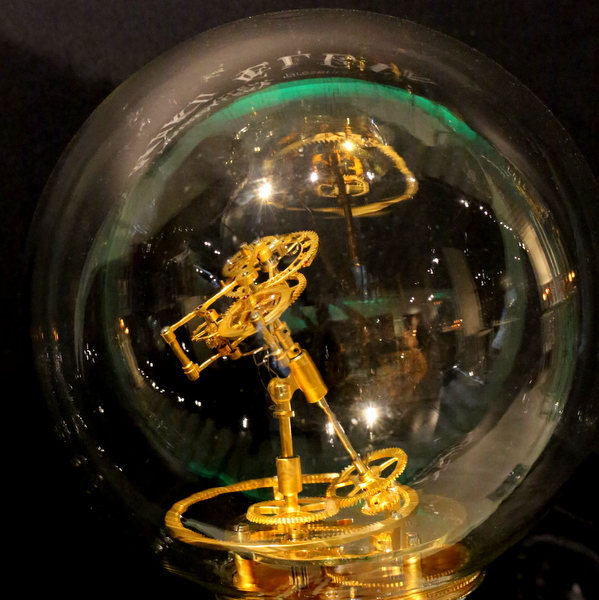 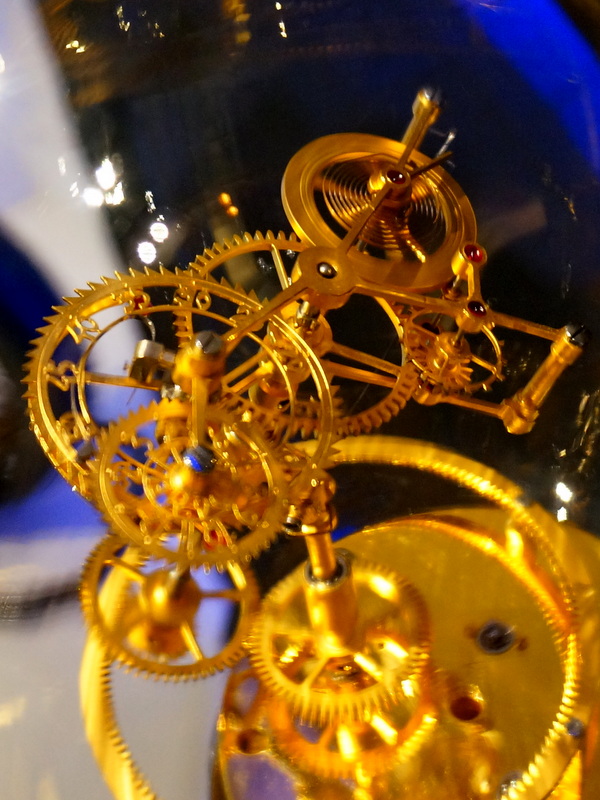 In the end, looking at the clocks around the gallery and meeting Miki Eleta was all in all, a wonderful experience. Aside from enjoying the pieces themselves, I enjoyed meeting Miki, as people like him are a testament to the power of human creativity. He has made me realize that when an idea is met with unrelenting action, anything is possible. The mere fact of the clocks in the exhibition attest to his level of achievement in a field that he had no formal training in, only blind passion, an a willingness to find a way to make his idea work.

Now the only question I have is what would happen if he turned his attention to watches? Seeing what he has been able to with clocks, I’m sure that the watches that come from Miki Eleta will certainly be very special.

Please see the embedded video for my interview with Miki where you can hear him explain the mechanism behind “Hippocampus” and “La Luna.” For at least the time being, Miki Eleta unique clocks and other clockwork items are available for sale at the MB&F M.A.D.Gallery in Geneva. mbandf.com/mad-gallery