This name is not uttered so easily, but the Milus Herios TriRetrograde Seconds Skeleton Watch is an instant classic. It even requires two full breaths to say the entire name, a quality that luxury watches seems to pride themselves on. This long titles does the Milus Herios Triretrograde Seconds Skeleton proud. A quick glance reveals a perfect square tank watch. The perimeter of the face has art-deco fashioned numerals running around a partially skeletionized view of the circular movement. No matter how square a watch is, that vast majority of movements inside these watches are round. Luckily, this movement features an automatic movement which winds the watch as you wear it. Many watches of this ilk possess manually wound watches for two reasons. One, the watch can be a bit thinner, and two, it provides unobstructed viewing of the movement which is at issue in a partially skeletonized watch. The decision to make this an automatic watch increases its everyday practicality, and thus the appeal in my opinion. 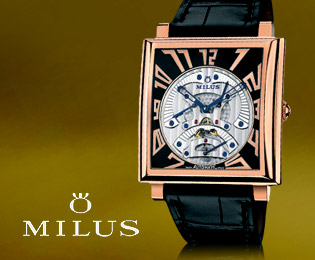 The combination of the affluent classic styling and the unique TriRetrograde seconds counters has earned this Milus Herios several design awards. As the Hublot Big Bang did for Hublot, it is my feeling that the Herios TriRetrograde Seconds will add new life in Milus, at least in many markets. Available in a number of color schemes and in highly polished steel or gold, the Milus Herios TriRetrograde costs between $5,000 and $20,000 depending on the materials and where you purchase it. A rare and desirable watch, it should be instantly recognizable to those able to appreciate the distinct appeal.