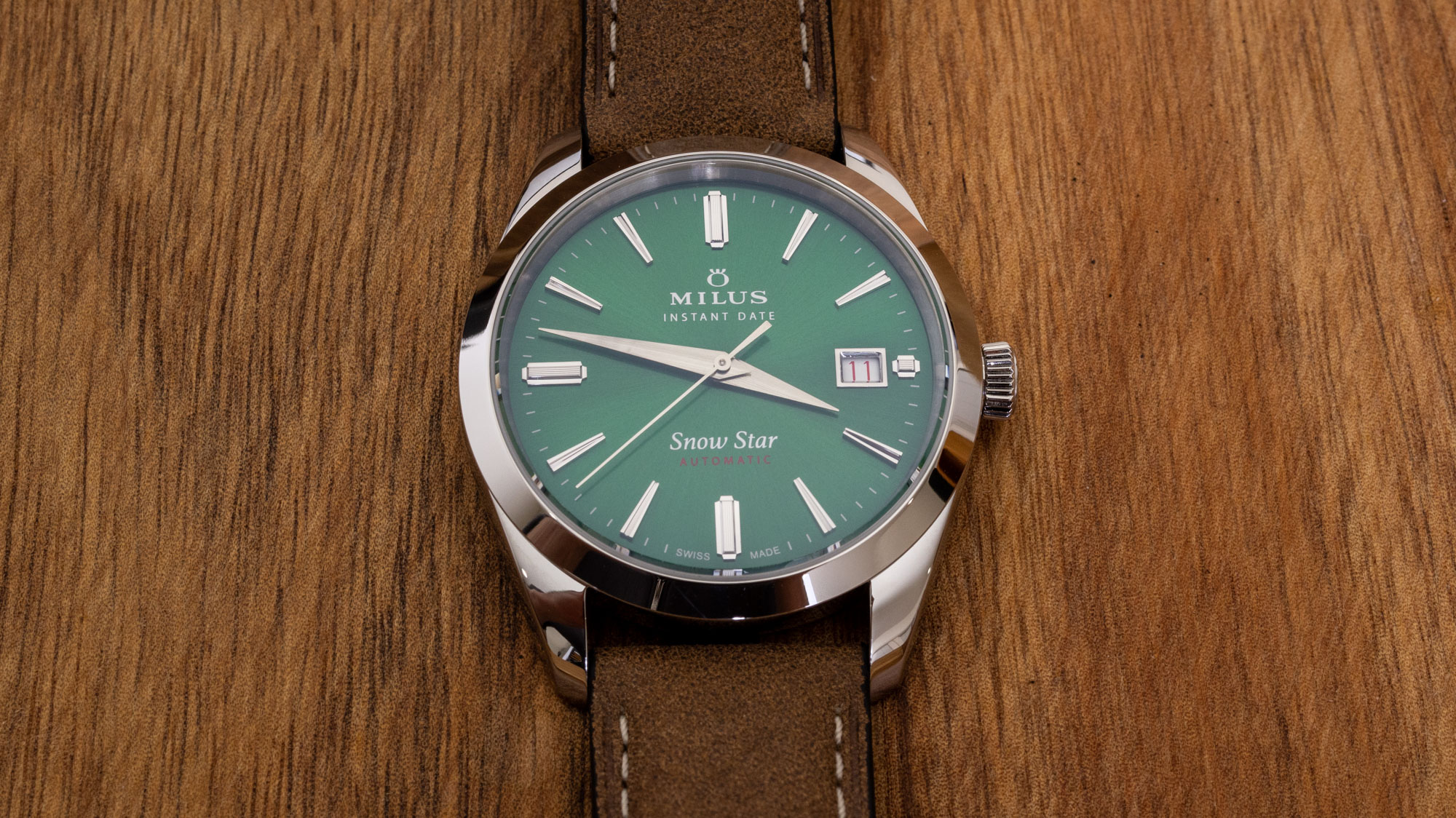 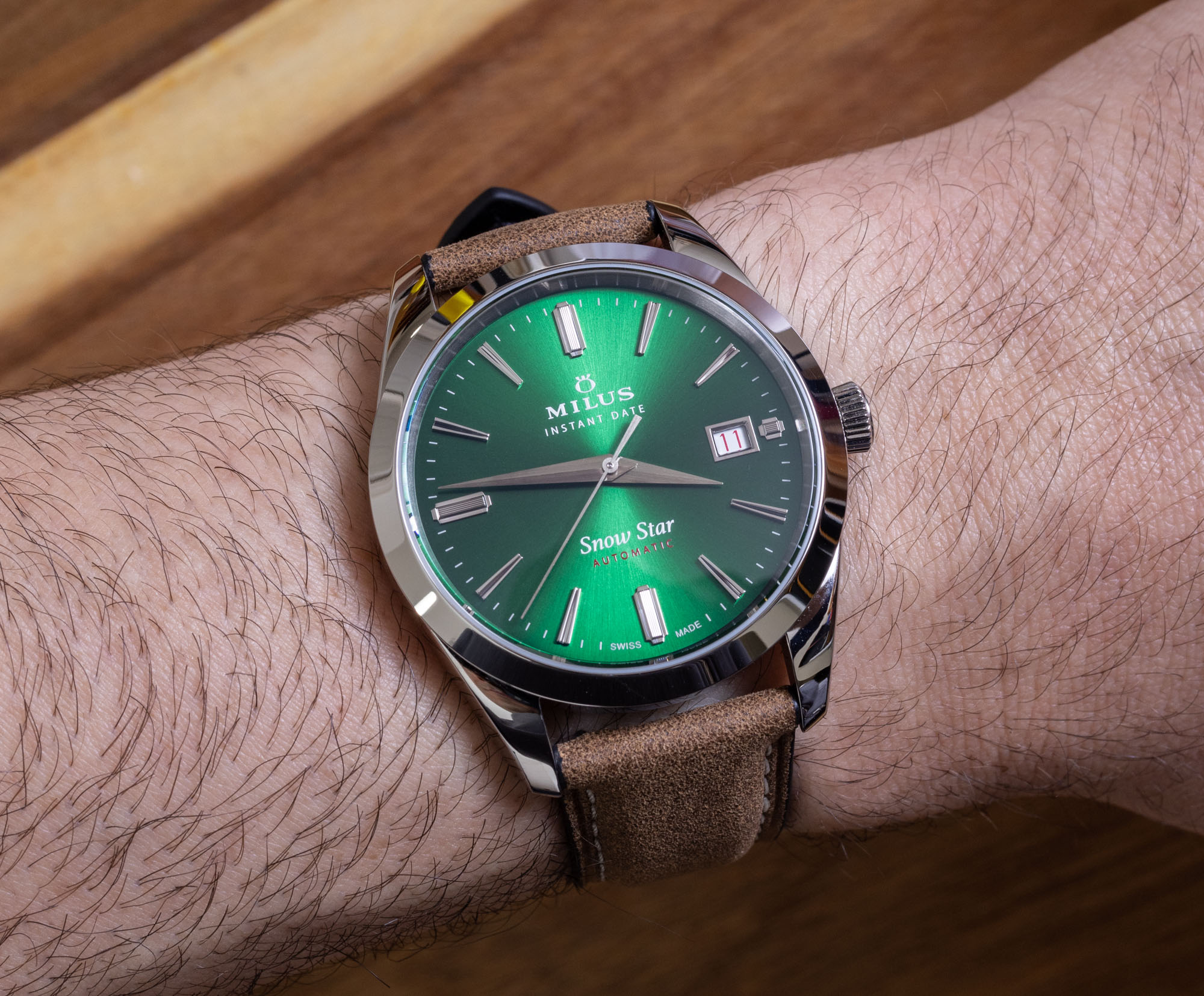 Swiss Milus tries to get their slice of the trendy green dial market with a newer version of the Snow Star that it calls the Boreal Green. With it, the excellent Milus Snow Star watch family (originally reviewed on aBlogtoWatch to here) now has four dial options including silver, black (aBlogtoWatch hands-on here), blue, and the Boreal Green we have here. Given the “Snow Star” name of the collection, Milus felt it necessary to connect these colors to themes in the sky. I’m not sure this is the exact green of the famed Aurora Borealis, but it is an attractive metallic forest green done with a sunray finishing pattern on the face.

The Snow Star collection from Milus was recently revived in 2021 (see my previous reviews linked above) as a modern version of a classic dress watch. Milus seems to have historical evidence to suggest that a version of the original Snow Star (or a watch like it) was used in a U.S. Air Force pilot survival kit for some servicemen who were flying in the Pacific theater of combat over parts of Asia. That’s a cool backstory for a watch that, upon simple inspection, is just another classic-looking timepiece. Even without the interesting survival kit history, the Snow Star is a highly capable wristwatch of its type and also represents a solid value. 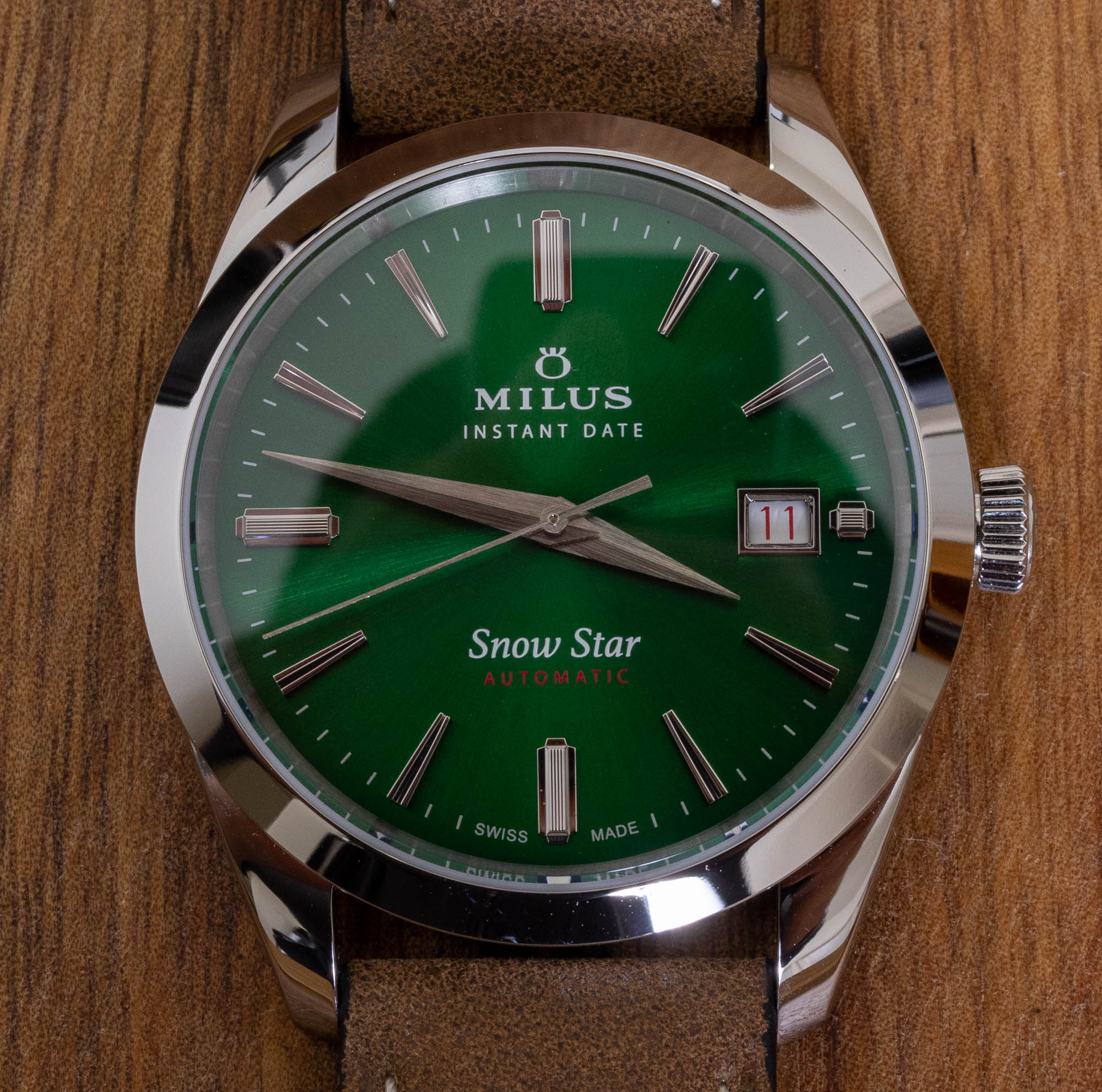 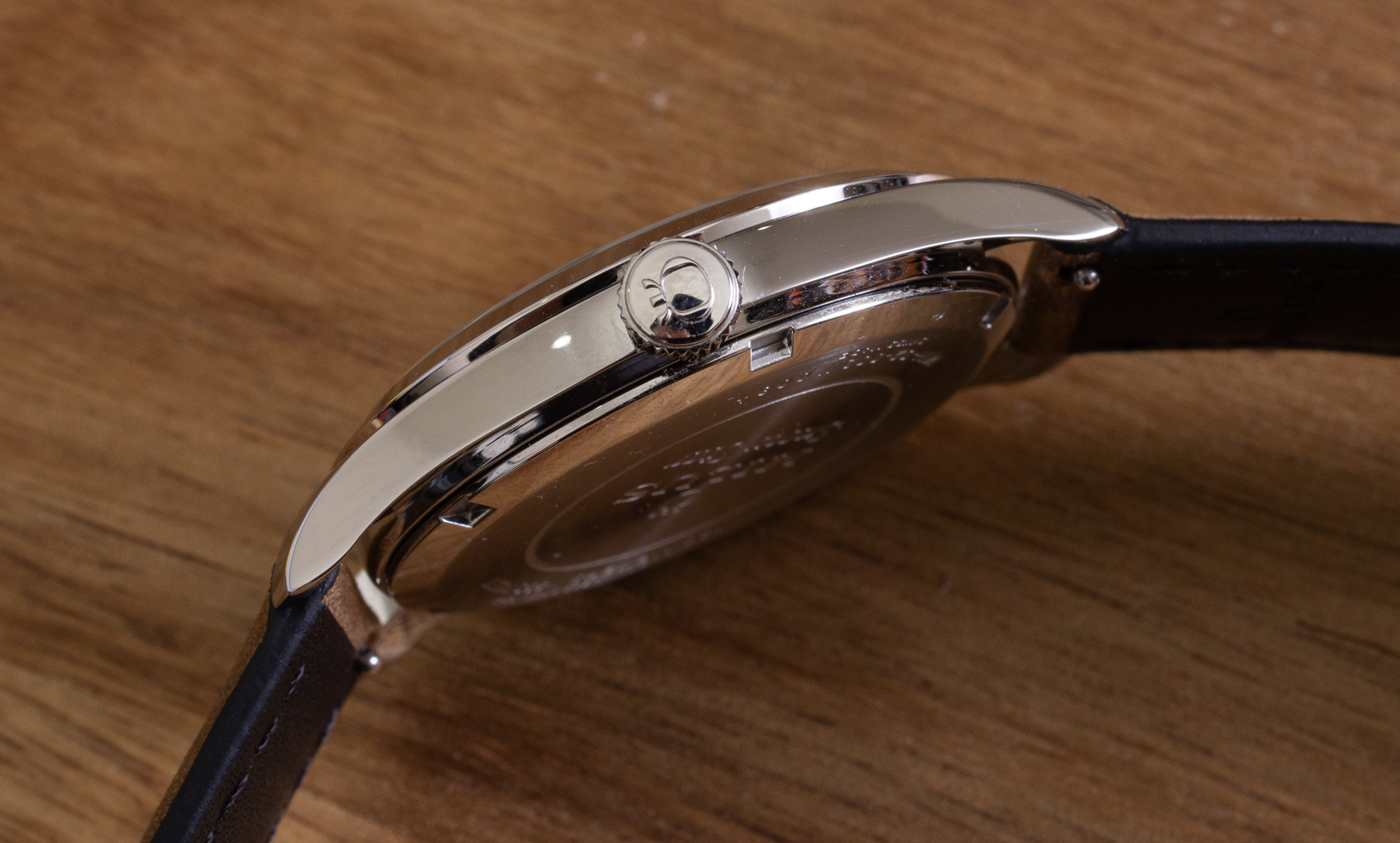 The steel case is 39mm-wide and 9.45mm-thick with a 47.7mm long lug-to-lug distance. That means it wears very comfortably as a men’s dress watch with sleeves or even a women’s watch. The case isn’t the standard 316L steel that most watch brands use. Rather, Milus chose to work with 904L steel, which is very similar to what Rolex uses. (904L steel is a bit tougher and more chemical-resistant.) Given its hardness, it also holds a lovely polish, which is very much expressed in the graceful curves of the Snow Star case.

The entirely polished case (a look that suits it well) is also water-resistant to 100 meters with a screw-down crown. Over the dial is a slightly-domed AR-coated sapphire crystal. Dial legibility is very good thanks to the quirky applied hour markers that remind me of things you’d see from watches circa the 1960s. There is a prominent frame around the date window, which uses a disc with red date numerals that matches a bit of red text on the dial. For hands, the elegant Snow Star opts for dauphine-style hands, but here in a brushed style that allows for better dial legibility. As a dressier watch, there is no luminant. The “Instant Date” text on the dial is unrelated to any particular innovation in the movement used in today’s Snow Star watches but is rather a throwback to when it was more common to have slower “wandering dates” that took some time to get into position. 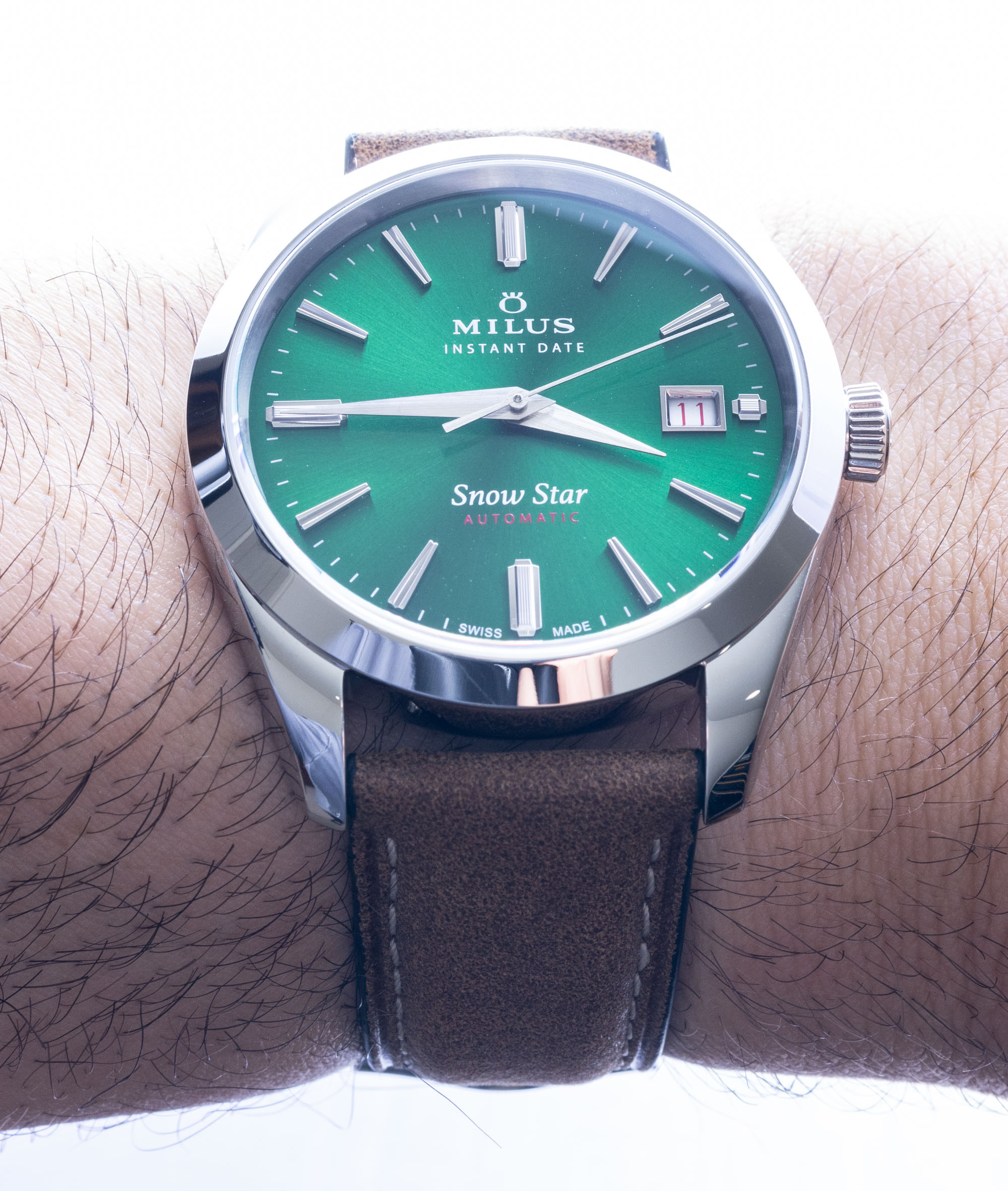 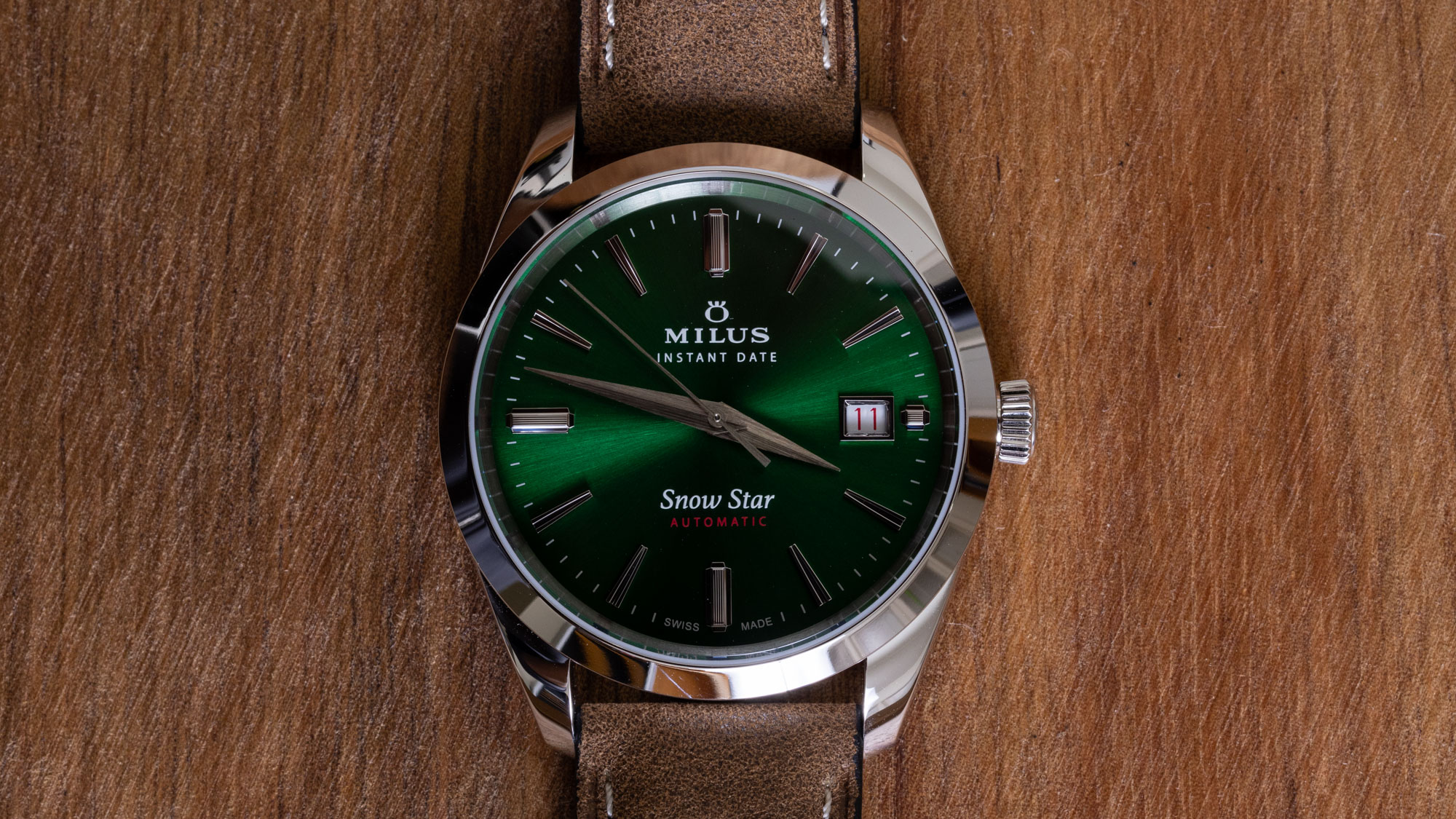 Inside the Snow Star watch is a Swiss Made ETA 2892-A2 automatic movement in “Top Grade.” That means it has decorated surfaces, blue screws, and here a custom Milus automatic rotor. The time+date movement operates at 4Hz (28,800 bpm) with 42 hours of power reserve. Unfortunately you cannot view the movement through the solid caseback, but at least you know it’s pretty sitting inside the watch.

Milus packages its watches in a bit of a quirky way so that the case and the strap are separate. The good news is that the straps (here in a natural tanned-leather style) come on quick-release spring bars. At 20mm-wide, you could easily pair a number of straps with this pleasant green dial color for a variety of looks that would suit this version of the Milus Snow Star. Since Milus reintroduced the Snow Star, I have been a fan given the handsome classic style, sufficient level of quirky differences, quality materials and construction, and fair pricing. Price for the Milus Snow Star Boreal Green watch is 1,690 Swiss Francs. Learn more at the Milus website here.