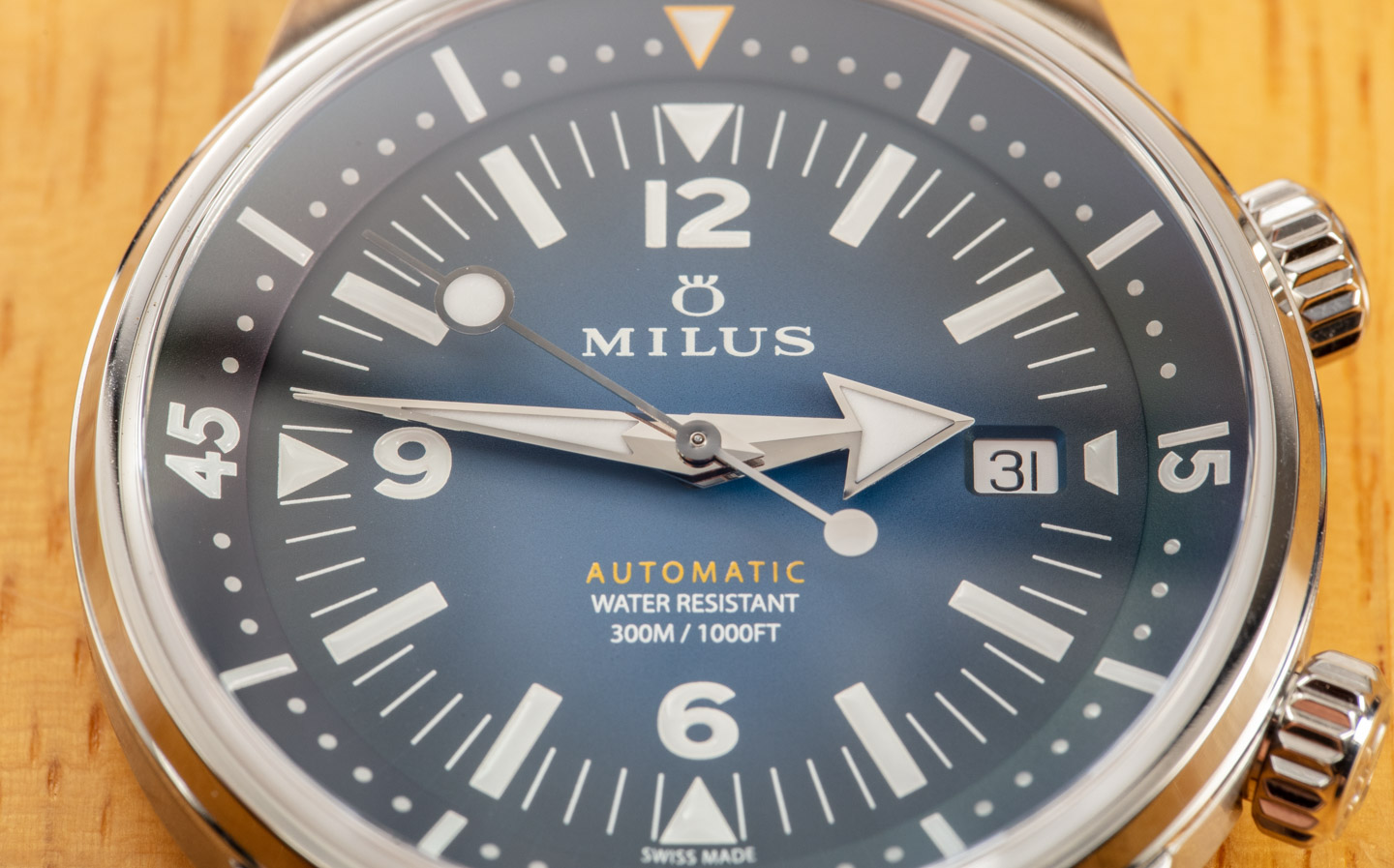 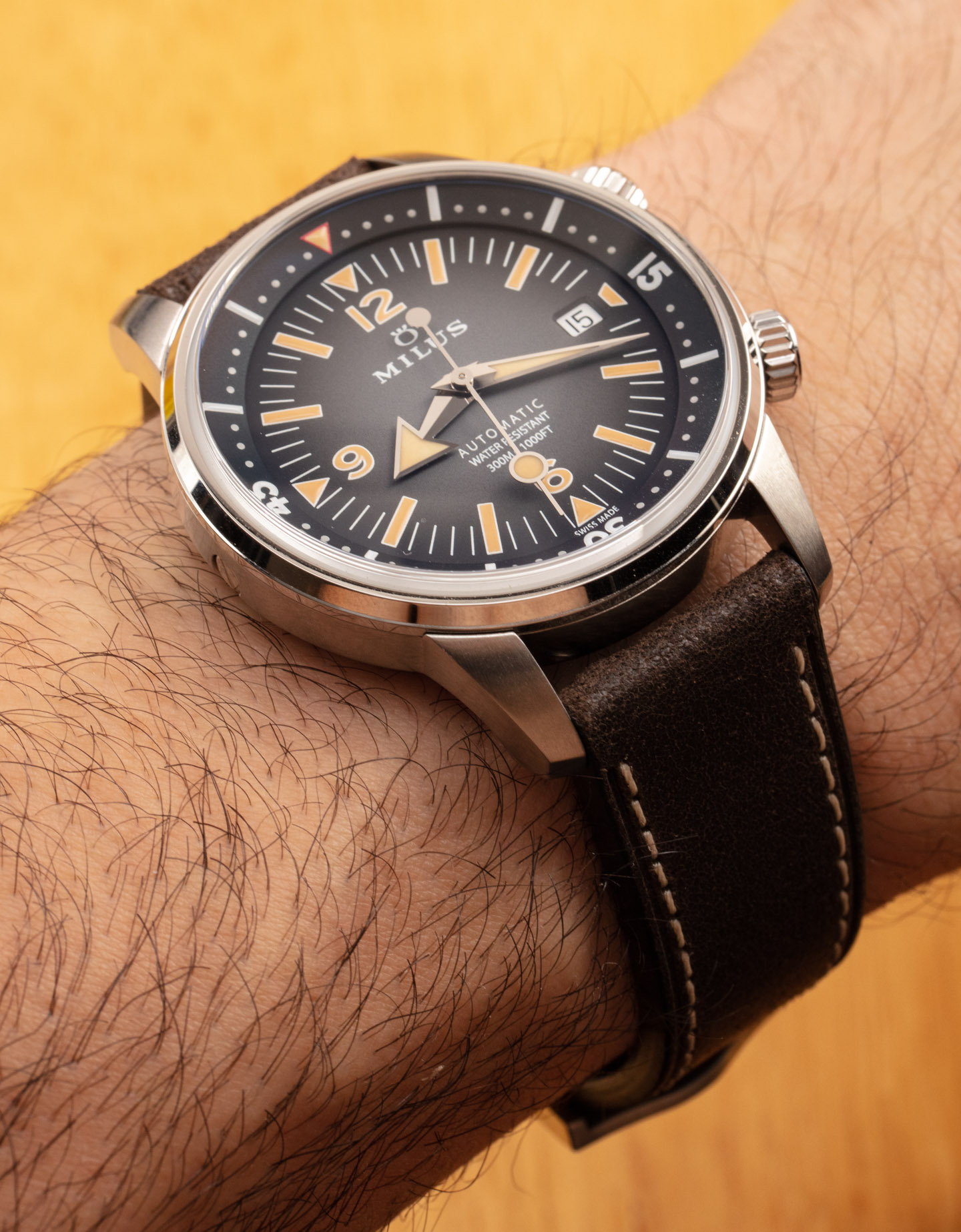 Modern day Milus’ sportiest watch is the Archimedes collection. Named for the famed Greek inventor and mathematician (from circa 200 BCE), the Archimedes is a diver’s watch that hearkens back to a 1970s “Super Compressor” timepiece also produced by the Swiss Milus brand. Milus takes extra care to position the Archimedes as a “gentleman’s diver,” implying that while it can easily be used for swimming and recreational diving duties, the watch is mostly designed for daily wear and social situations. Nothing wrong with that.

A depressingly small number of diver’s watches ever truly go underwater. Rather than lament the wearer’s lack of adventure, it might be wiser to focus on the fact that people who like diver’s watches tend to need those products to work at least as well on land as on water. Milus does that admirably, with a modest-sized package that has as much luxury polish as it has retro diving vibes. 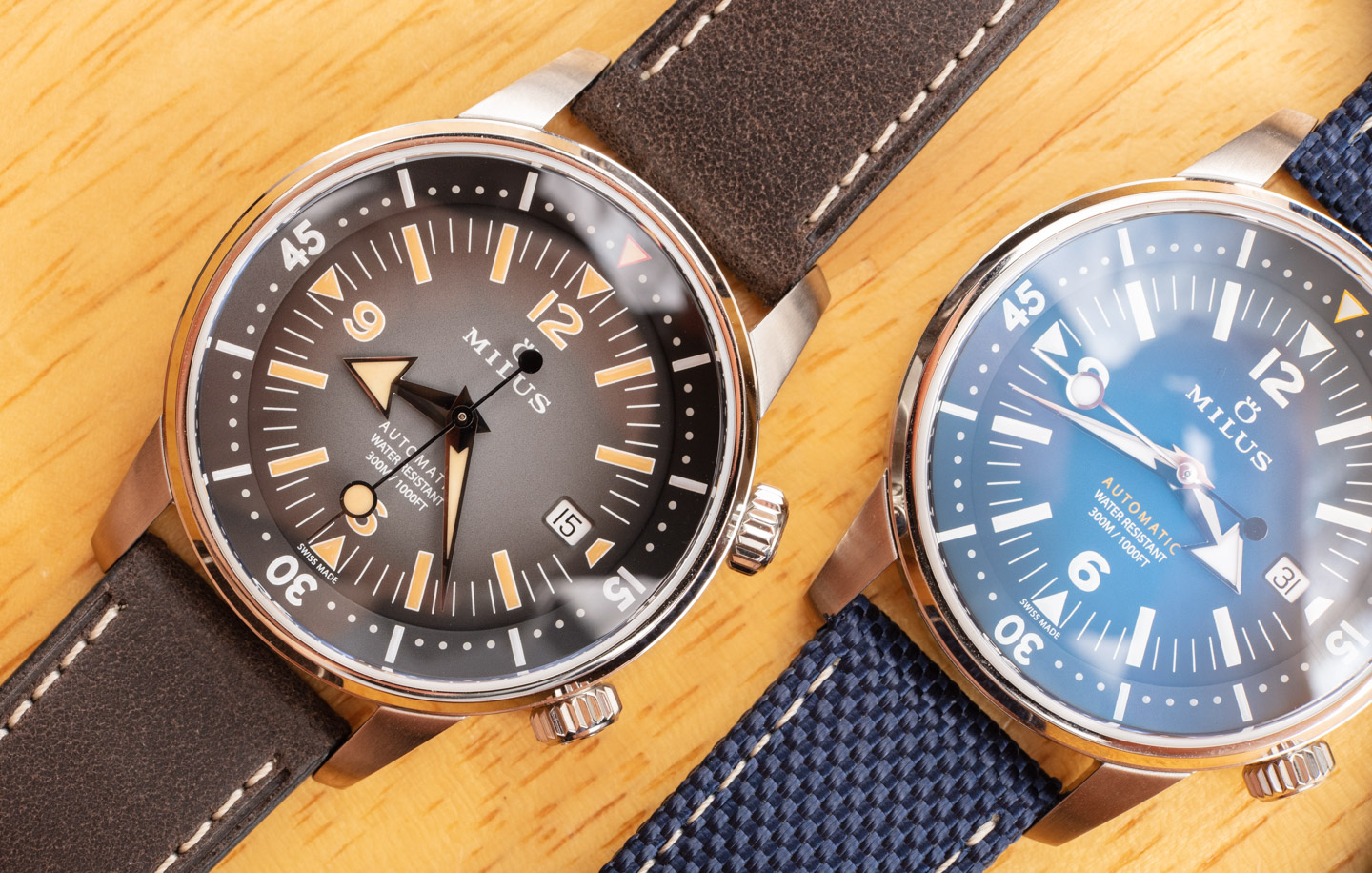 The Milus Archimedes is not a perfect watch, but it has a lot of welcome personality, and it is pretty. The worst thing you could say about it is that it is a bit plain. Especially for the money, I think Milus has something appealing here. Certainly, there are features that would have been nice to have in the Milus Archimedes, but at just over $2,000 USD in price, I think there is a lot for the money.

Some of the watch’s quirks are more amusing than anything, and, as I said above, help give the watch personality. What makes me smile, for example, is that the packaging (which Milus offers for other watches) is meant to be compact, modern, and functional. It is at least two of those things. The leather-bound zipper case is nicely made and uses good materials. Milus specifically wanted something that owners would keep around and actually use. When you open the case, you find the watch case in one little foam cutout and the detached straps in another cutout. The point for Milus was to remind people that the 18mm straps have quick-release spring bars and can easily be swapped out. The problem is that there isn’t any place to put back a watch that has the strap connected to it. Then, just before you get irritated and think to yourself “who thought of that?…” you learn that you can just pull out the foam part and, without it, you can use the nice case again. Maybe that is why this timepiece is called the Archimedes — it is a really thinking man’s watch. 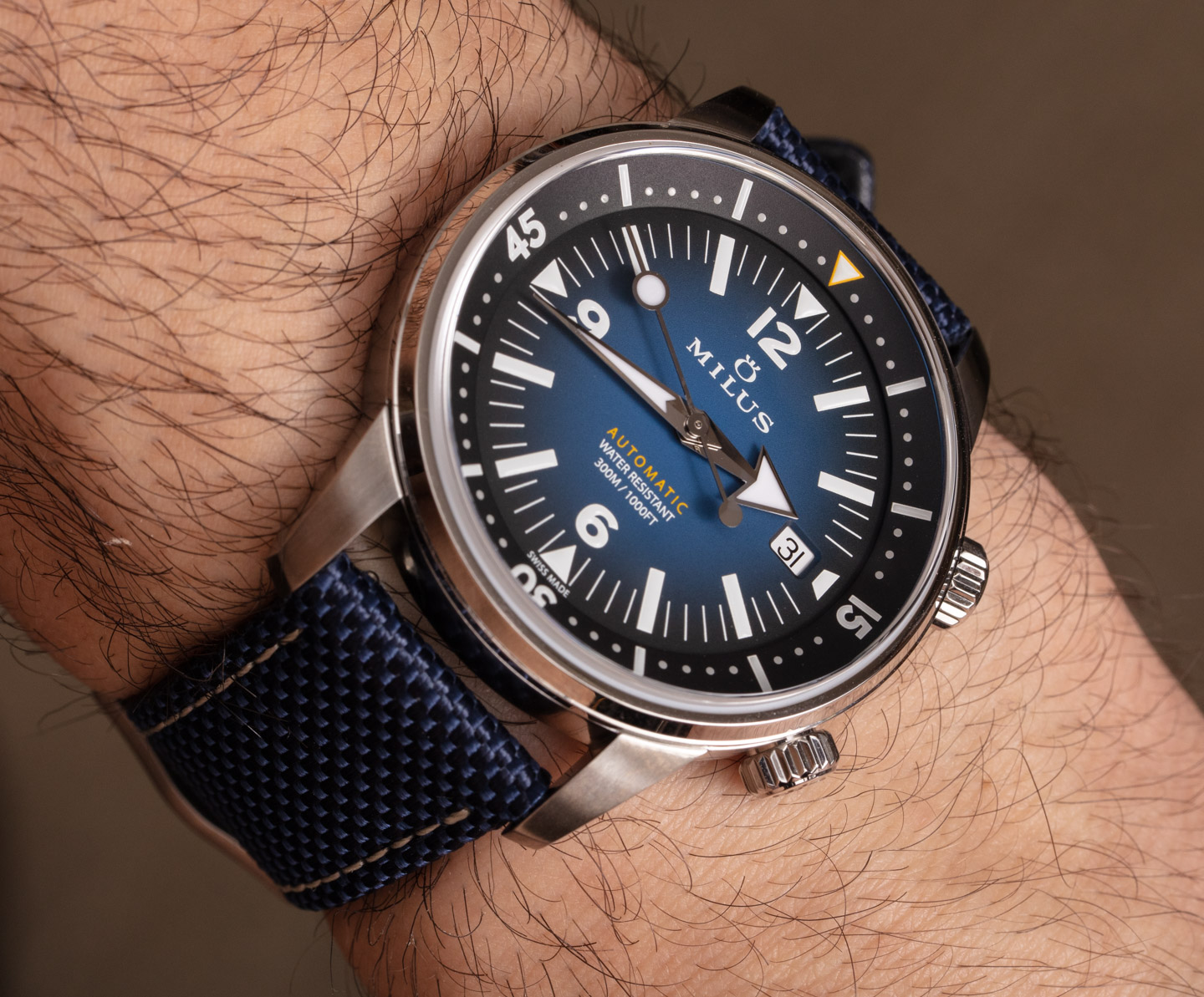 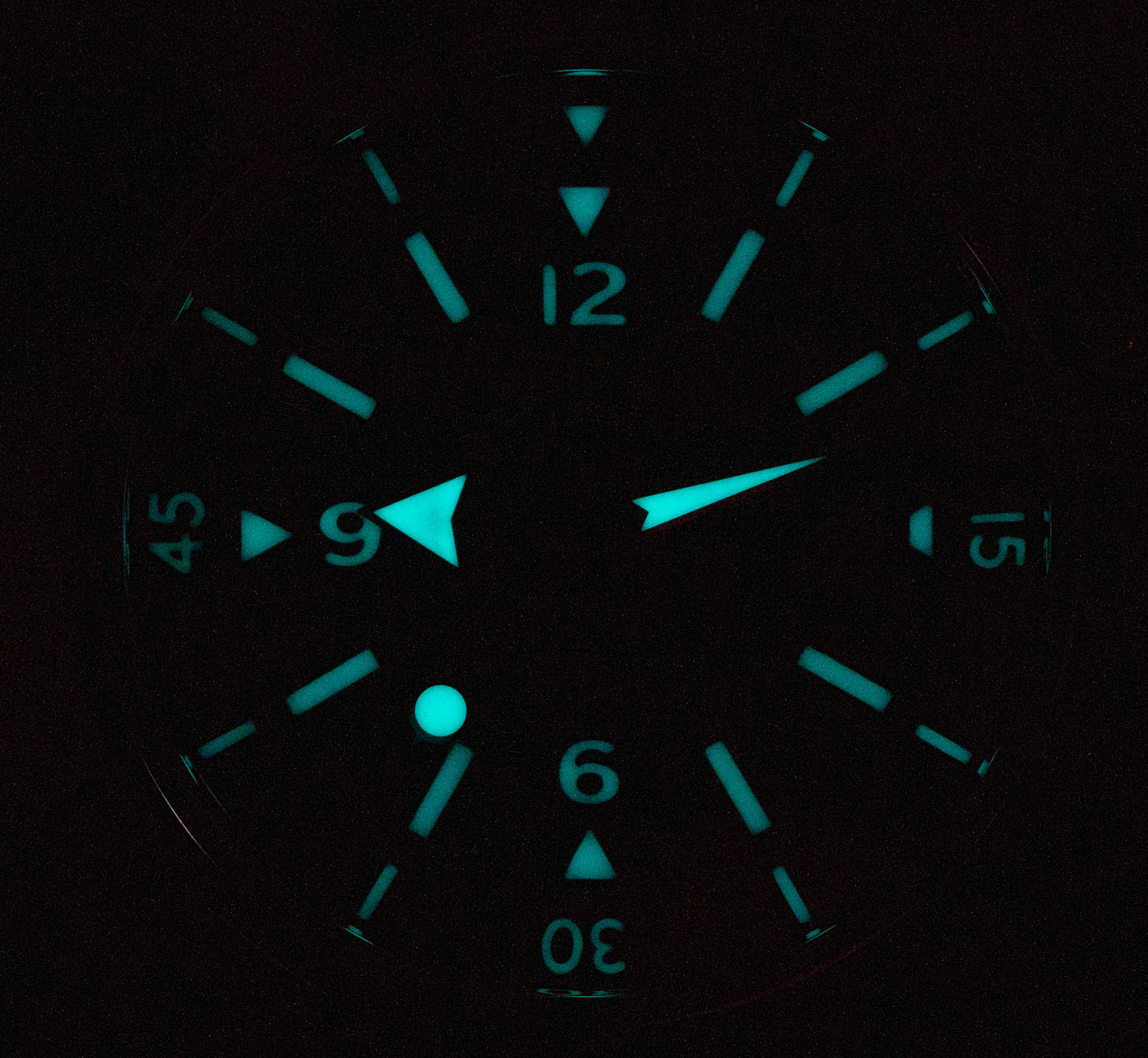 The automatic helium release valve on the side of the case is placed in a strange-ish position not in the center of the case but rather toward the caseback. No doubt, there is a functional purpose for this mostly unused function, but looking at it does make you wonder why it was placed there. One of my favorite touches on the watch is actually on the caseback, which itself is geometric in shape so that you can easily unscrew it if needed, and on it is both the Milus logo and a special logo just for the Archimedes. You don’t tend to see that on watches very often, and I appreciate seeing it there.

As a diver’s watch, the Archimedes steel case is water-resistant to 300 meters and has an AR-coated domed sapphire crystal over the dial. The crystal has a bit of glare, but it isn’t a big deal given the curvature of the crystal. The crystal also happens to offer a bulbous look to it given its slight magnification when looked at from an angle. I’d say overall this is a positive thing. 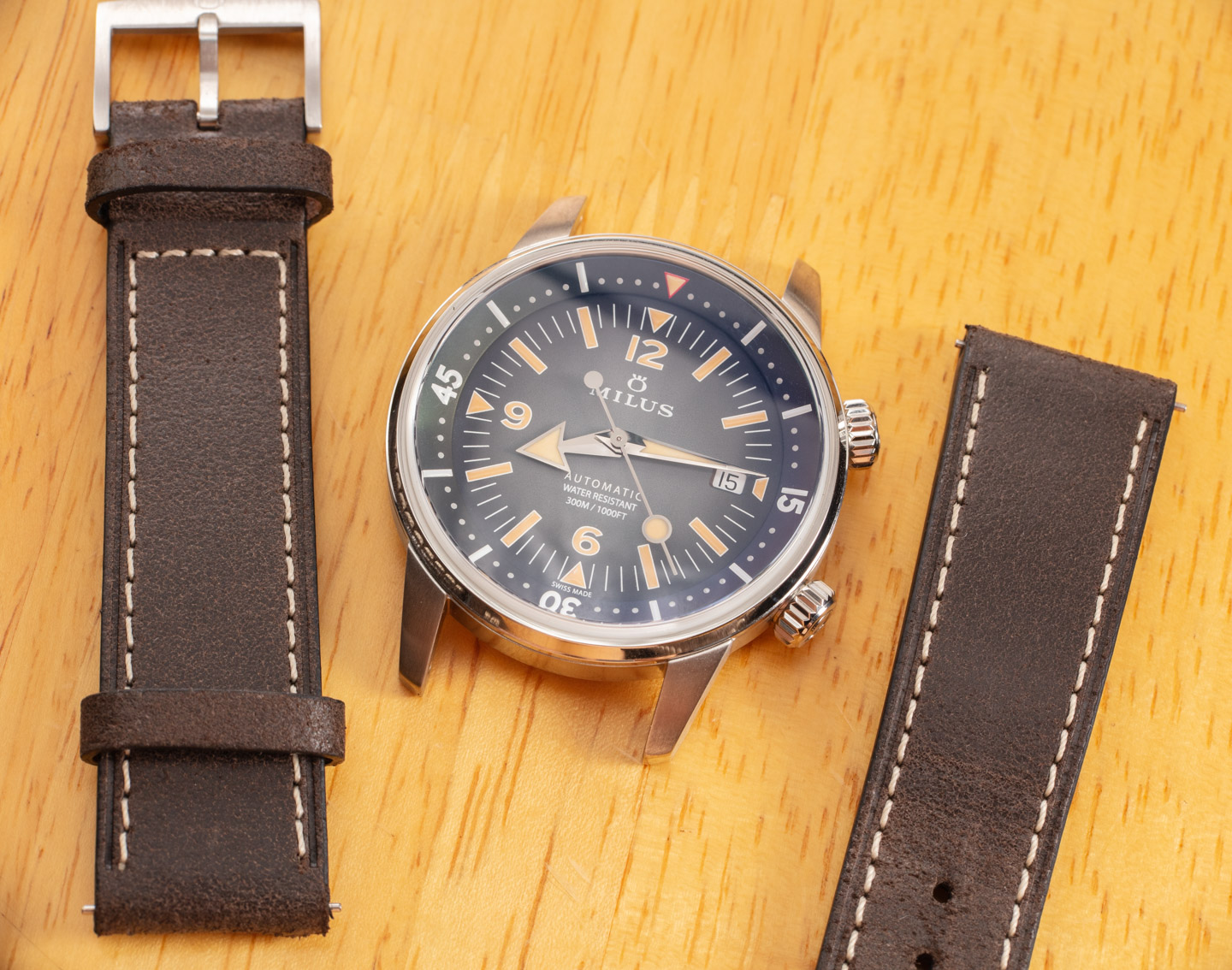 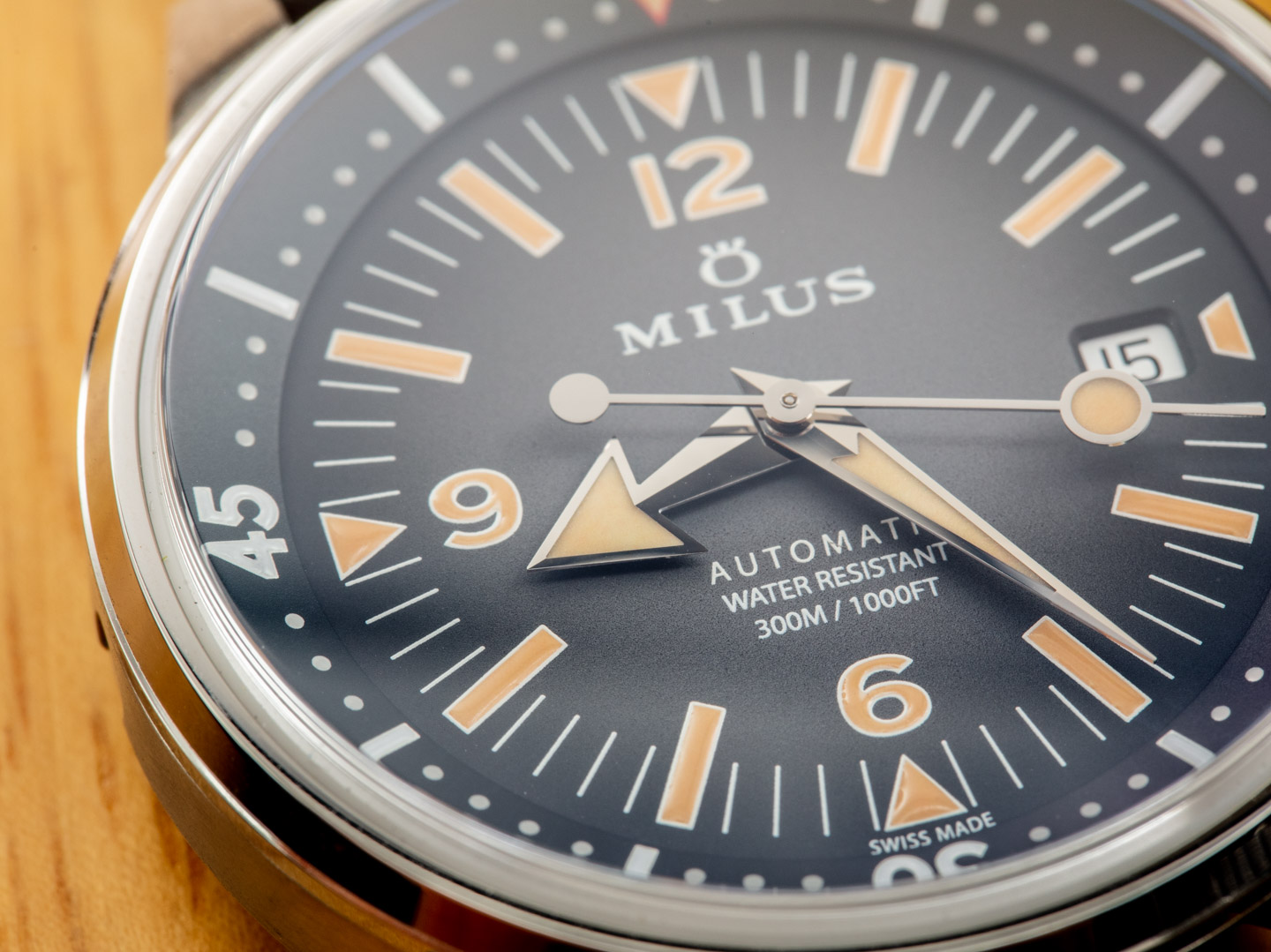 On the wrist, the stainless steel case is 41mm-wide, about 13mm-thick, and has a roughly 51mm lug-to-lug distance. Case polishing is handsome, with Milus opting for a combination of brushed and polished surfaces, resulting in a good effect. The case is actually the most ordinary-looking part of the Archimedes, but what saves it is how well it is finished and minor details such as the shape of the screw-down caseback.

This Super Compressor-style case also has double crowns, with one being used to operate the internal rotating bezel and the other to operate the movement. Some people love cases like this with double crowns and internal bezels. I’m not one of the diehard fans, but I am open-minded to a good-looking expression of the theme. The internal rotating bezel has luminant material on it and is attractive in design. When you unscrew the upper crown, you can move it in either direction, which I like — but I would have preferred little marker clicks as I turn the inner bezel ring around (as opposed to feeling free-floating, as is the case here). Though it isn’t a big deal, you just miss out on the pleasurable tactile sensation of turning a clickety bezel. 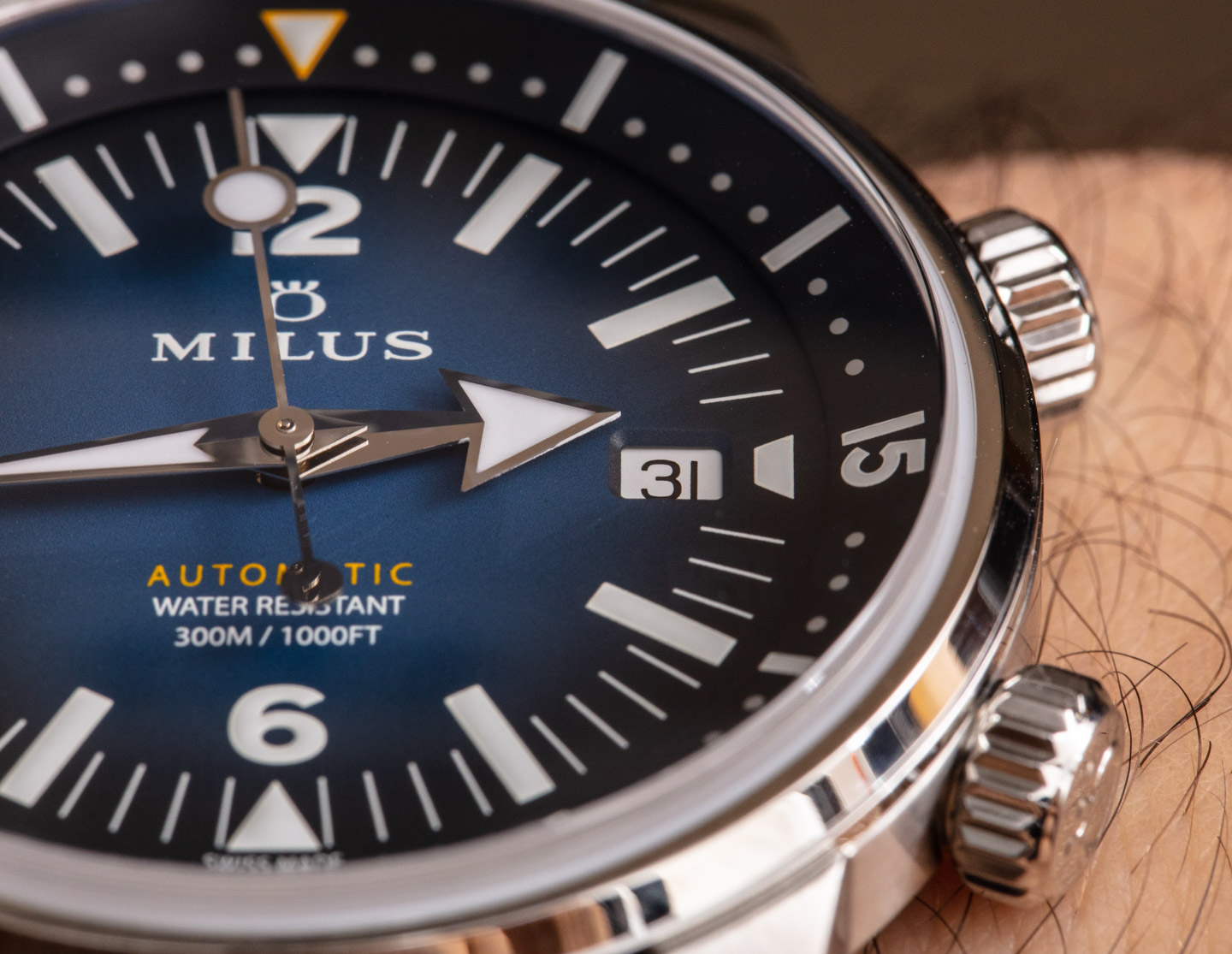 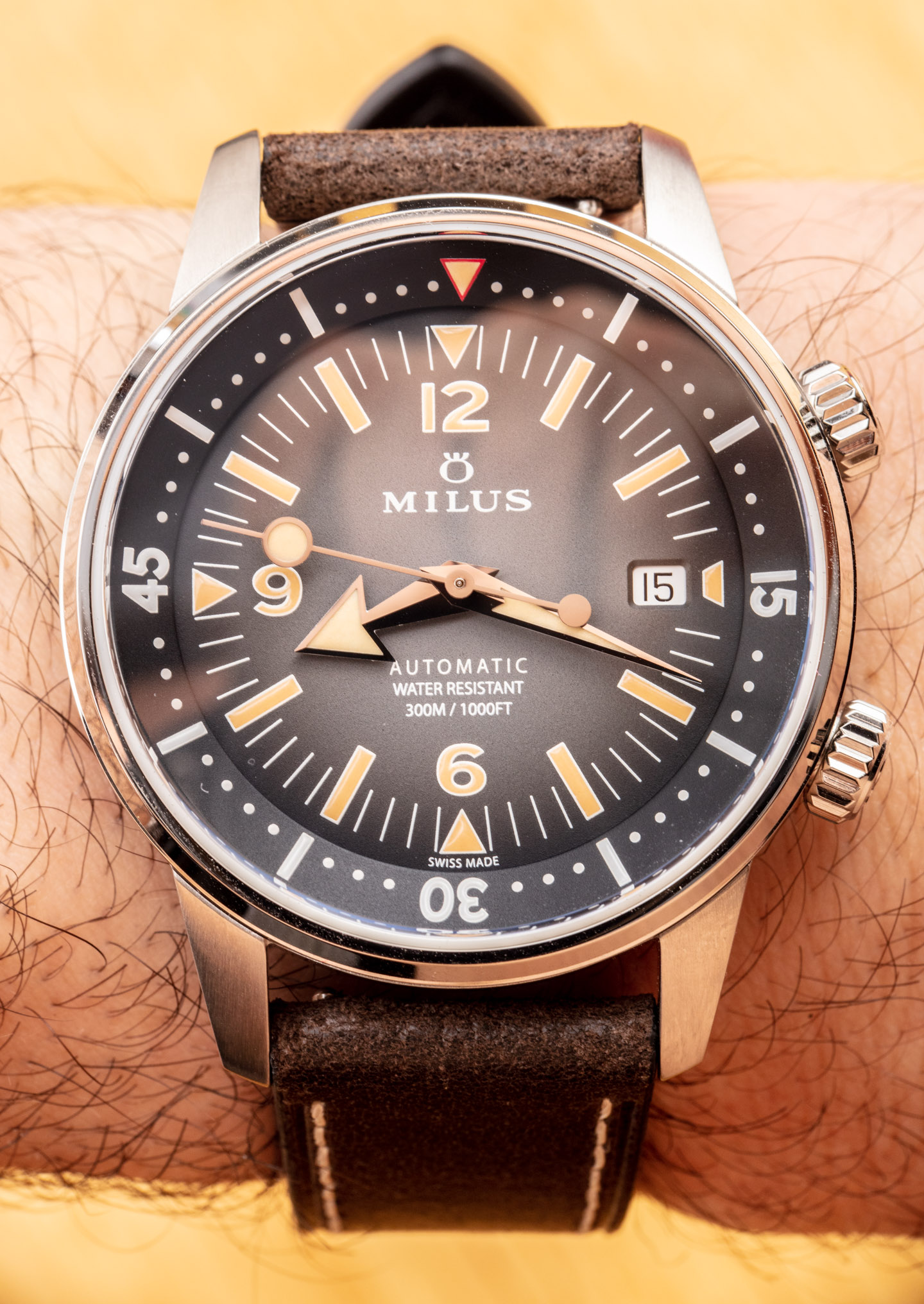 Inside the watch is a movement that I think is very respectable at this price point by a “top-grade” Swiss Made ETA 2892A2 automatic. This is among the best of the 2892 movements, and it is a relatively slim 4Hz, 42-hour power reserve automatic movement which offers the time and date. Unfortunately, there is no display caseback option, as I believe that a nicely polished movement (this ETA movement grade has perlage polishing and blued steel screws) such as this would be nice for consumers to view without having to unscrew the caseback. The movement even has a customized skeletonized automatic rotor with the “Milus” name in it. 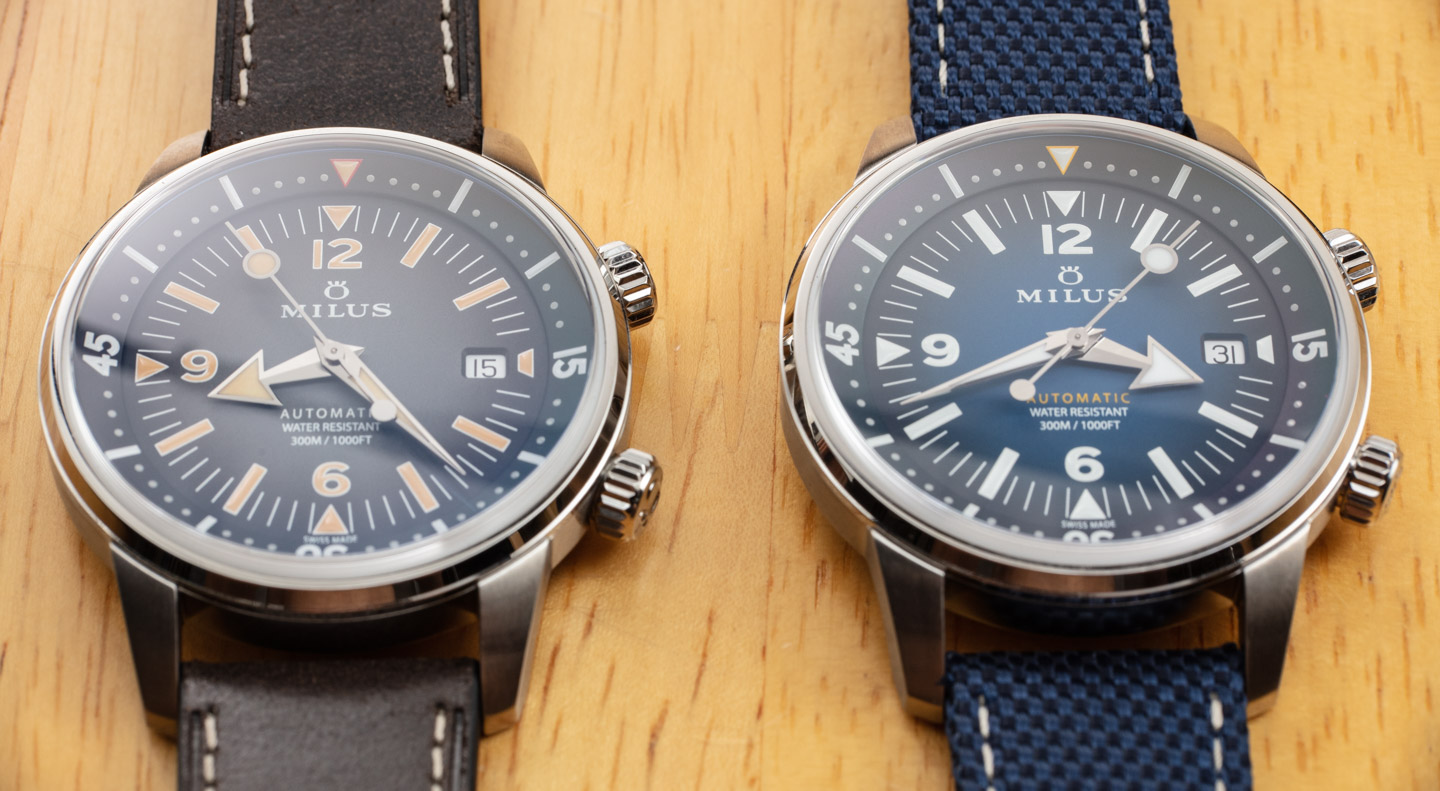 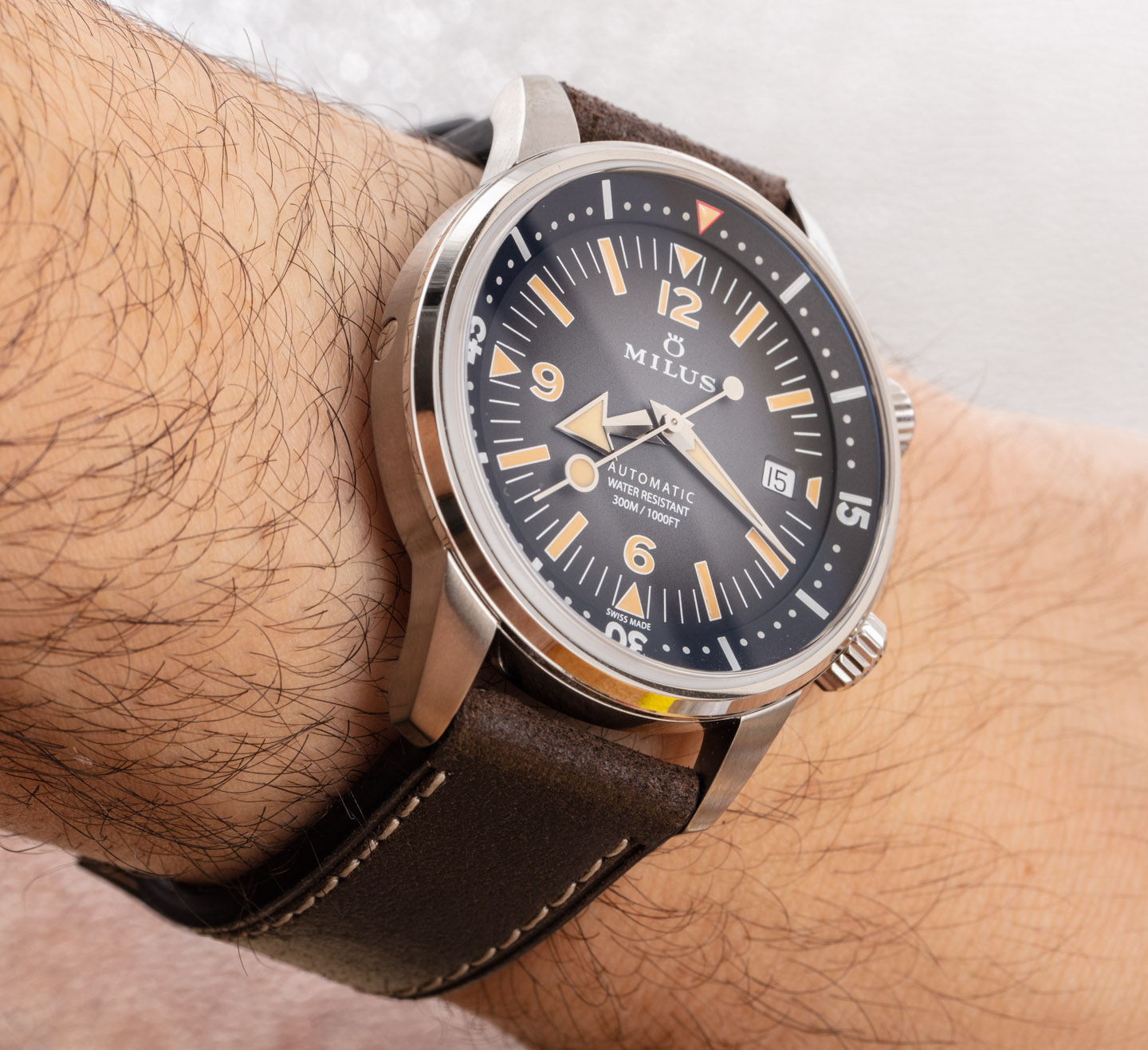 Included with these Milus Archimedes watches are two different nice-looking straps being brown woven nylon textile with a leather liner or brown suede leather. They do look nice but they are rather stiff if you ask me. I personally don’t like stiff straps, so I’d probably swap in another strap. Milus could probably make a bit more revenue by adding a strap section to its website, but as of this writing, that isn’t available quite yet (though you can buy the watches from their website).

There are going to be fans of this particular case and dial design who quickly realize there isn’t much else out there at this price point. Add the fine movement included in the package and the otherwise astute level of attention to detail from a veteran watch brand management team, and the Archimedes is one very decent timepiece for the money. It also doubles as a dressy watch far more easily than many of the other diver’s watches people interested in a Archimedes might be comparing it with. Price for the Milus Archimedes MIH-01-001 (in Black form), an MIH-01-002 (In Blue form) is $2,077 USD. Learn more or order at the Milus website here.