Hands-On With The Very Thin Ming 27.01 Watch On Eve Of Last Call 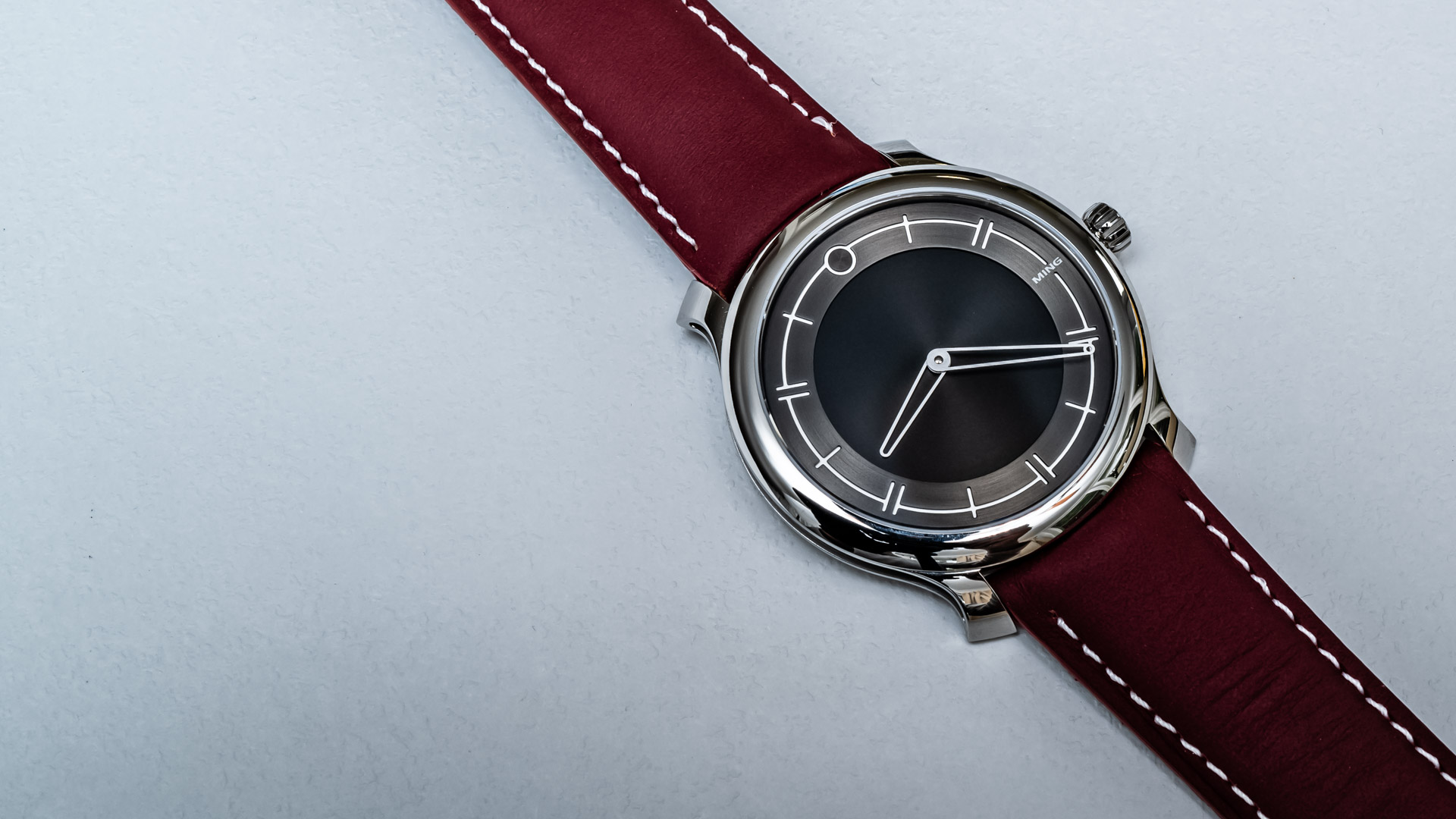 Though I spent hands-on time with this Ming 27.01 last summer, I waited to publish this until I knew another batch of the watch was being made available. Ming does not need any help in selling these watches, and this isn’t sponsored or promoted in any way by them; my intention is to alert any of our readers who have been hoping to buy a Ming 27.01 at retail. The final 50 pieces of the 27.01 (and 75 pieces of the 27.02) will go for sale on January 22 and 3am GMT (which is January 21 at 7pm PST). Anyone interested can find the 27.01 page here at ming.watch.

In the short three-and-a-half years since debuting its inaugural 17.01, Ming has achieved the kind of success that just about every start-up, microbrand, indie, whatever you want to call them, dreams of from day one.  Released last year, the 27.01 was the vanguard piece for not just the brand’s “second-generation” design language but also served as an entry-level ultra-thin watch from an independent brand, even though it carries a price that was fourfold that of the 17.01. Still, at $4,000 (and the new 27.02. at $5,000) the piece sold out nearly immediately and now trades for figures that I see approaching double retail. 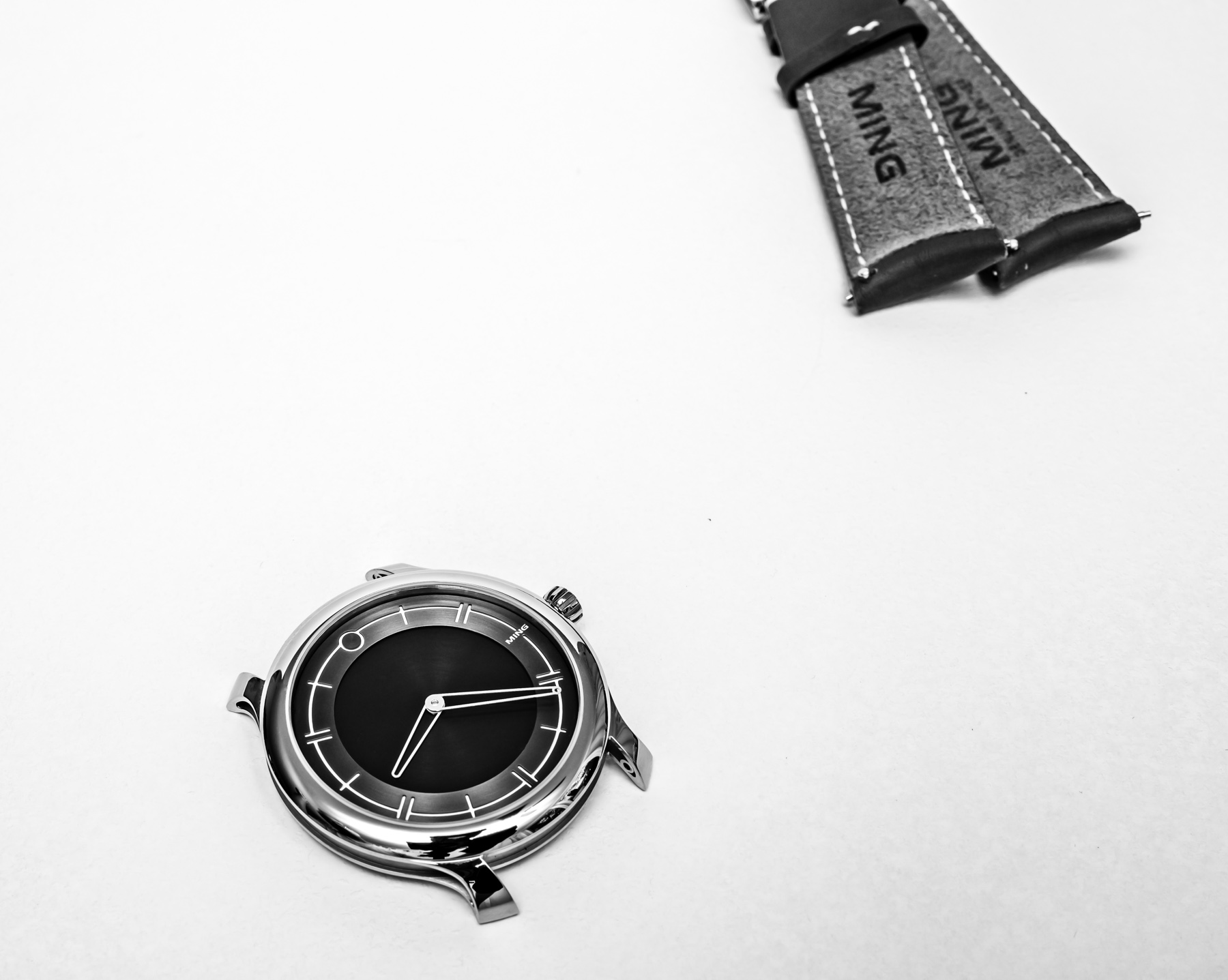 Before getting into the 27.01, I want to share a few thoughts on Ming, as well as the underserved market for four-figure independent watches.

First off, it has been so refreshing to see the nineties-early aught thinking of “Chinese = cheap” be thrown in the dustbin. While the brand’s name is eponymous with its Malaysian founder Ming Thein, the word “Ming” is obviously also associated with the historical Chinese Dynasty we learned about in school. How satisfying it has been to see Ming Watches — made in Switzerland — be so embraced by the watch media, establishment (GPHG), and the collector community. There’s no other way to put it: There was an audaciousness to naming an independent Swiss-made watch brand Ming. I feel like this sentiment hasn’t really been expressed, but I don’t think I’m the only one who feels this way. 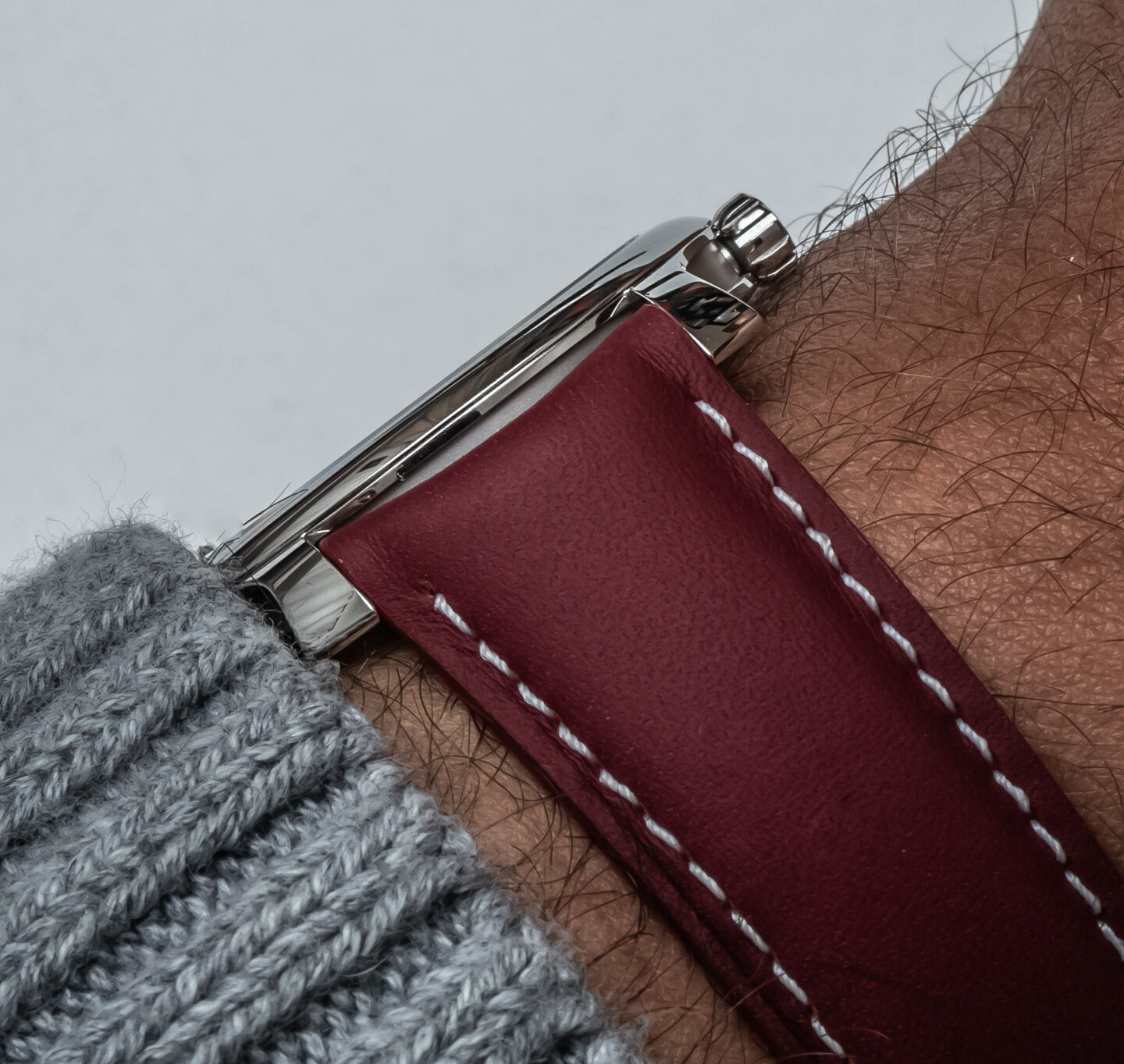 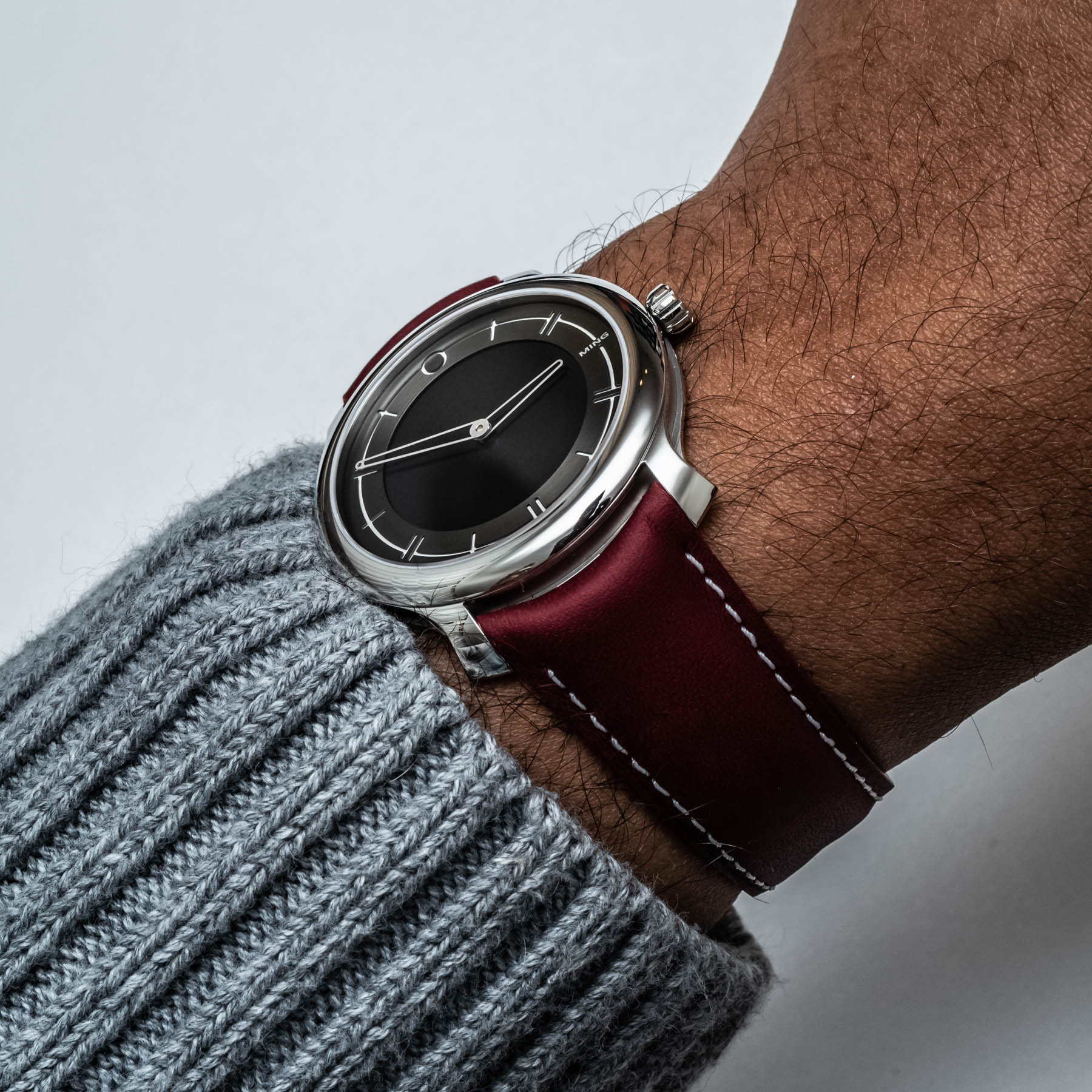 Now, on the topic of indies — it’s important to contextualize quite how difficult it was for a brand like Ming to find itself in the enviable position it has.  I’m not sure everyone quite appreciates what it takes to successfully navigate the famously conservative, risk-averse, and tight-lipped world of movement manufactures, dial-makers, case makers, etc… when your batches are a couple of hundred pieces at a time. This requires several different kinds of smarts, connections, and a fair deal of good luck.  For everyone who looks at a brand like Ming and shrugs with a “what’s the big deal?” I would consider looking at the ratio of independent success stories to the elephant graveyard of dead watch brands, a fair number of which just may have just survived if one or two things had gone their way. It was a rough world for indie brands, and that was before a pandemic. The exception here may be those independents with a noted watchmaker at the helm, but good luck finding those in the four-figure territory.

Due in part to this and other outside factors, there is a staggering dearth of options for enthusiasts seeking design-forward independent watches in the low-to-mid four-figure territory. In addition to some of the egregious Ming flips I’ve seen out there, I believe this also explains the runaway pricing of the limited-edition Louis Erard collaborations with Alain Silberstein and Vianney Halter that were initially $3,100 and $3,900, respectively, and I now see listed for about double that price. On the surface, it’s absurd but, again, there are just such few options in this category that it was bound to happen. Perhaps a lack of ability to peacock to strangers due to the pandemic forced people to peacock on Instagram, where the enthusiasts have outsized influence and tend to be particularly indie-friendly. 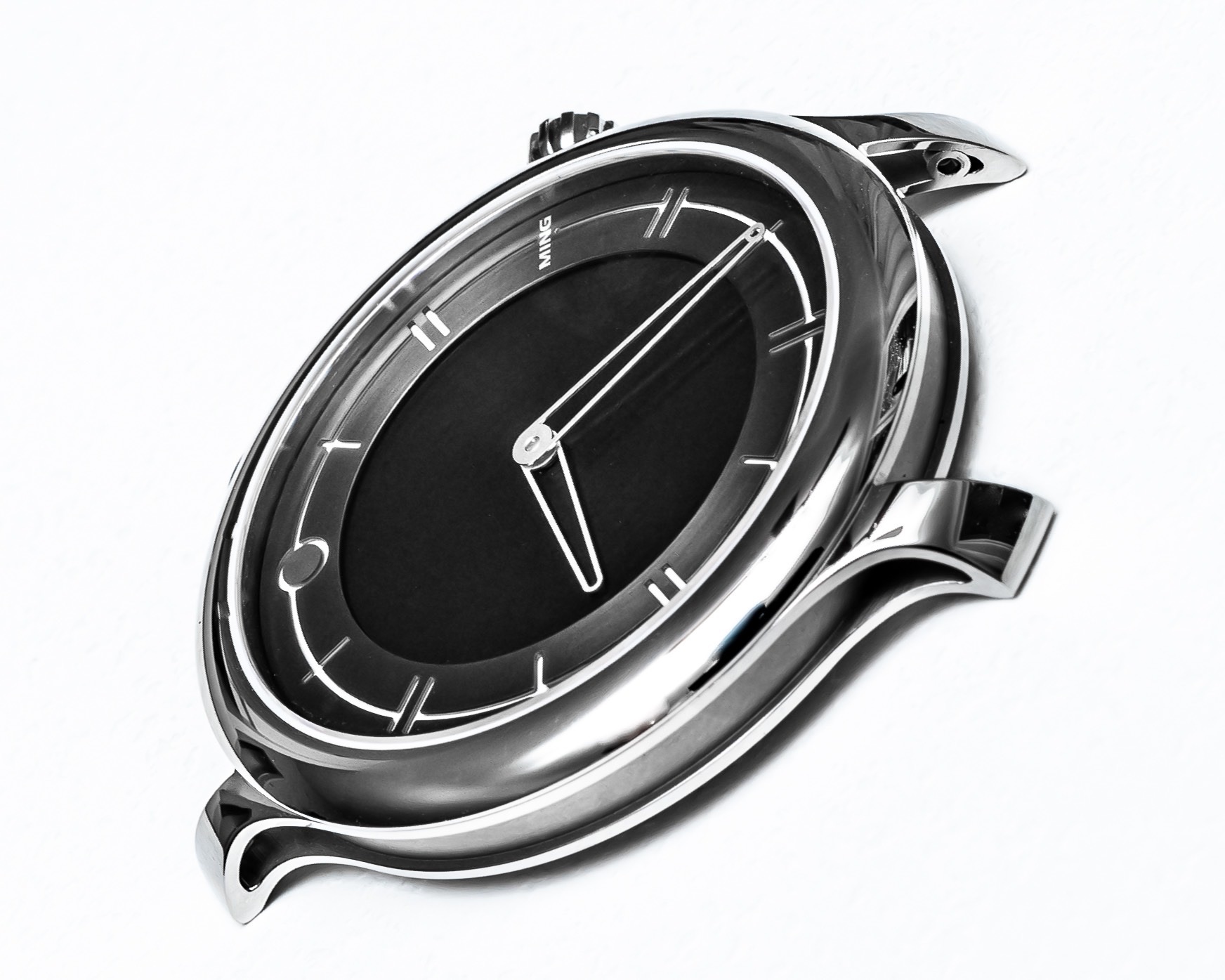 The slim steel case of the 27.01 measures 38mm-wide and just 6.9mm-thick, with the curved “flying blade” lugs accounting for the 42.5mm lug-to-lug height. An impressive evolution from the 17.01, the 27.01 still retained the “radial symmetry, the 0 at 12, flared lugs, and the easy-to-wind crown” that Ming Thein describes as the key elements of the brand’s design philosophy. Holding the watch in one’s hand is really the only way to truly simultaneously appreciate both the case finishing and its slimness. With the center of the case milled out, the curves flow naturally on either side, extending all the way through to the lugs. 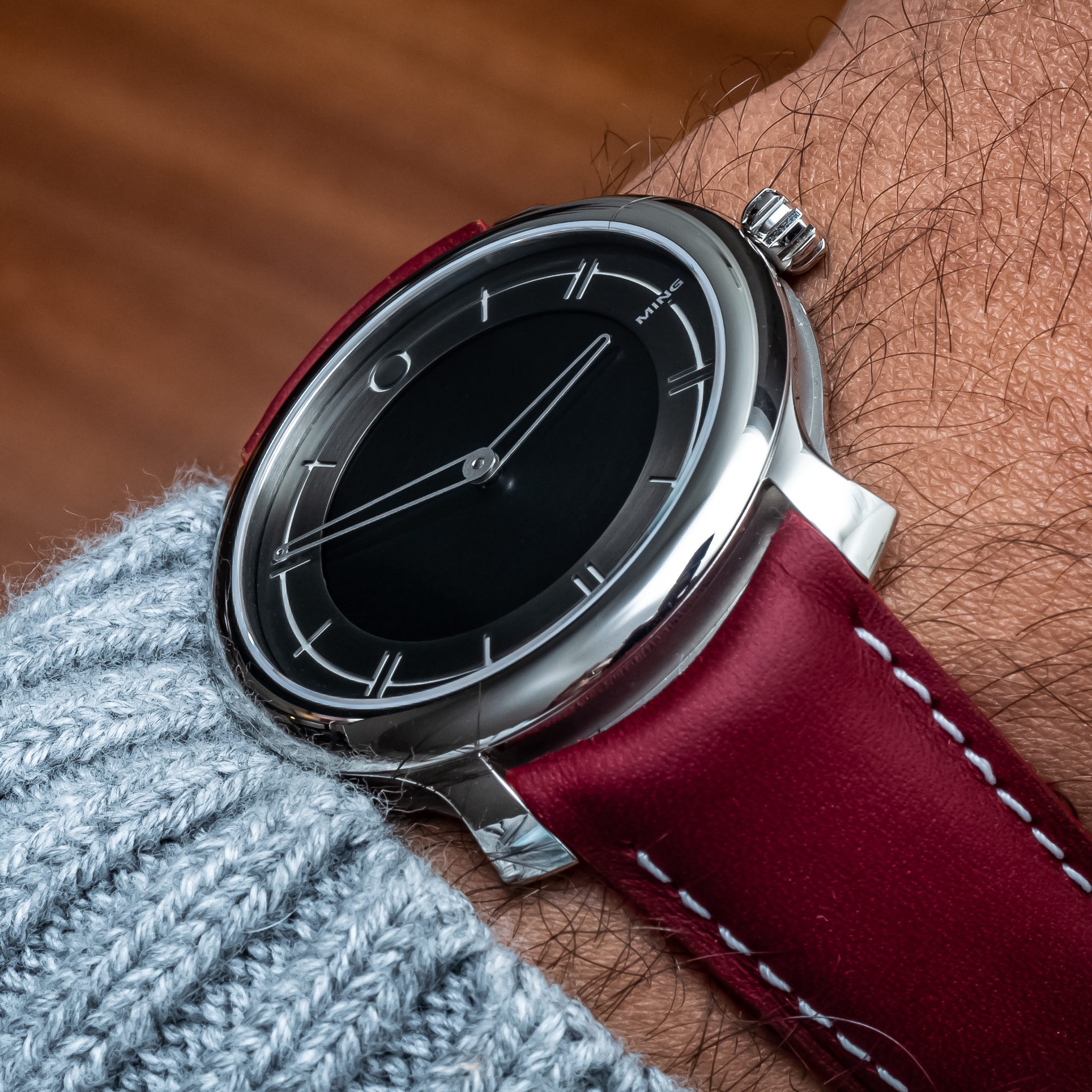 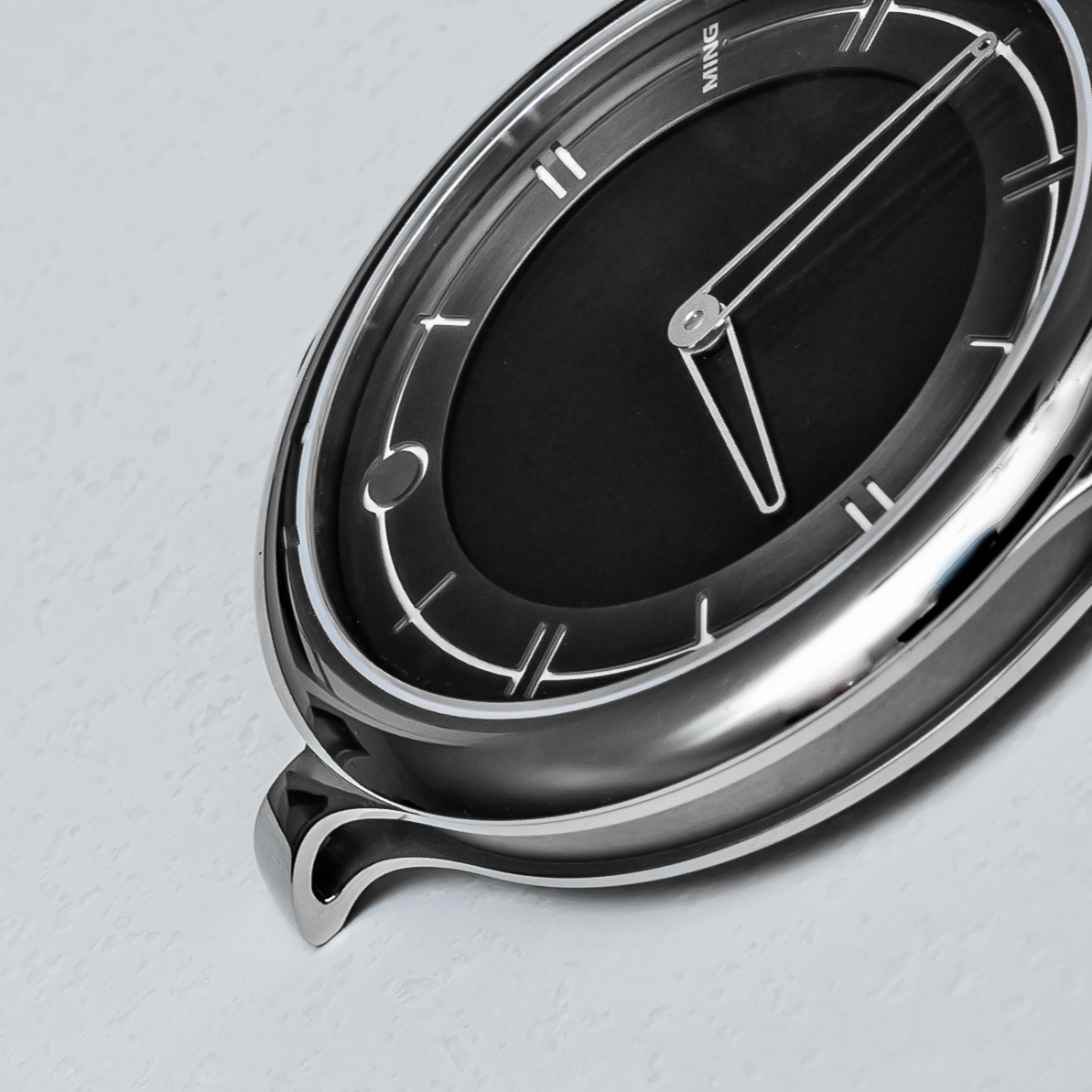 The design ethos of the 27.01 (and 27.02) makes me think of Moser, with both achieving a minimalism that actually has an identity and a distinct personality. There’s not much out there that could be confused with either of these brands. While the flying blade lug case design actually first introduced in the 17.03 GMT and then the 17.06 Copper, it was really the steady chipping away at dial elements that culminated in the 27.01.  The 17.01 began with hour numerals, then the 17.06 only had even number numerals and a single line marker for odd numbers, and the 27.01 finally does away with them altogether. This leaves the dial with the 0 at 12 o’clock with a single line for odd-numbered hour markers and a double line for even, and brand name at 3 o’clock. Honestly, I’d like to see the “Ming” text just gone altogether for the next collection. 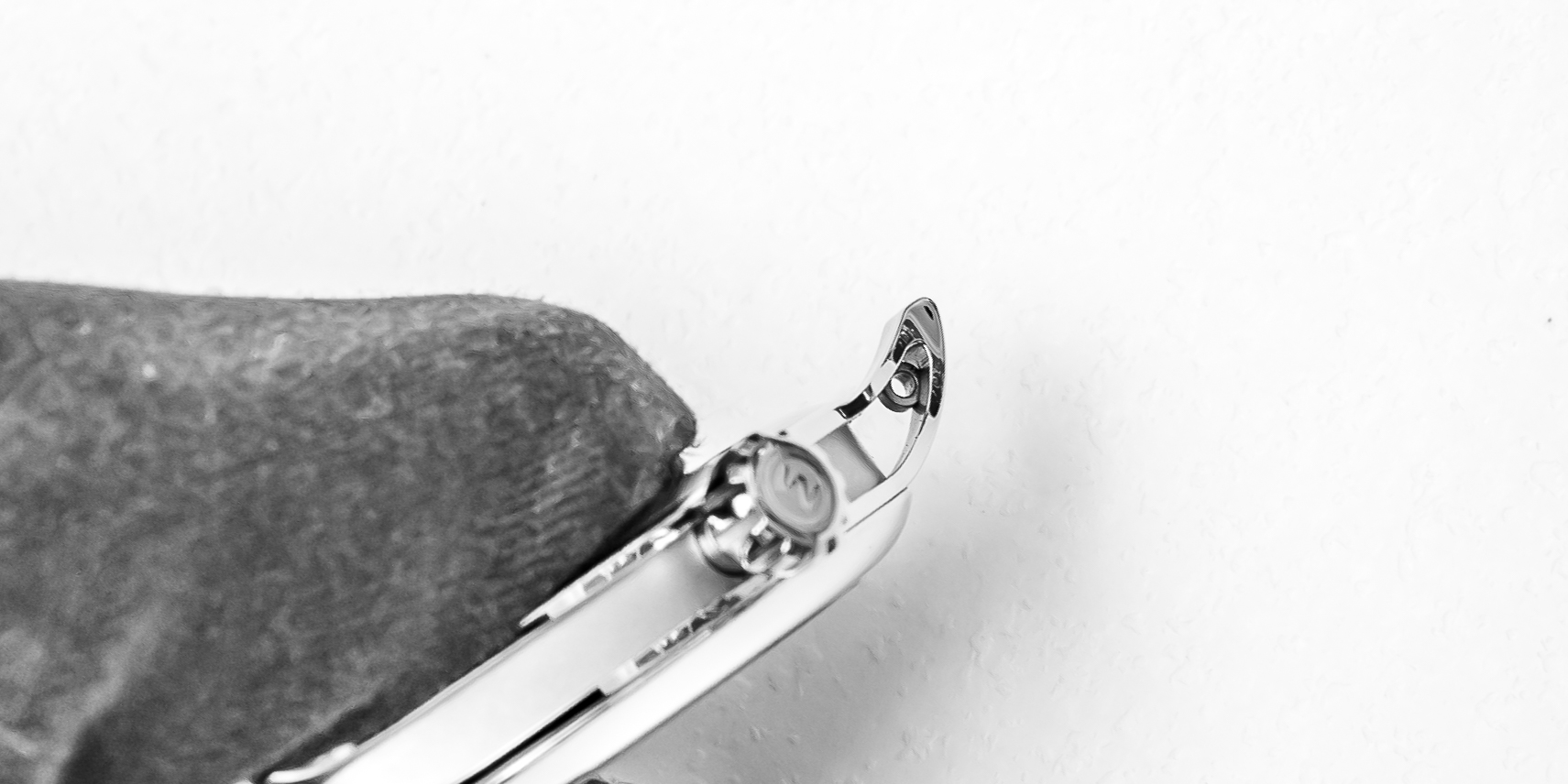 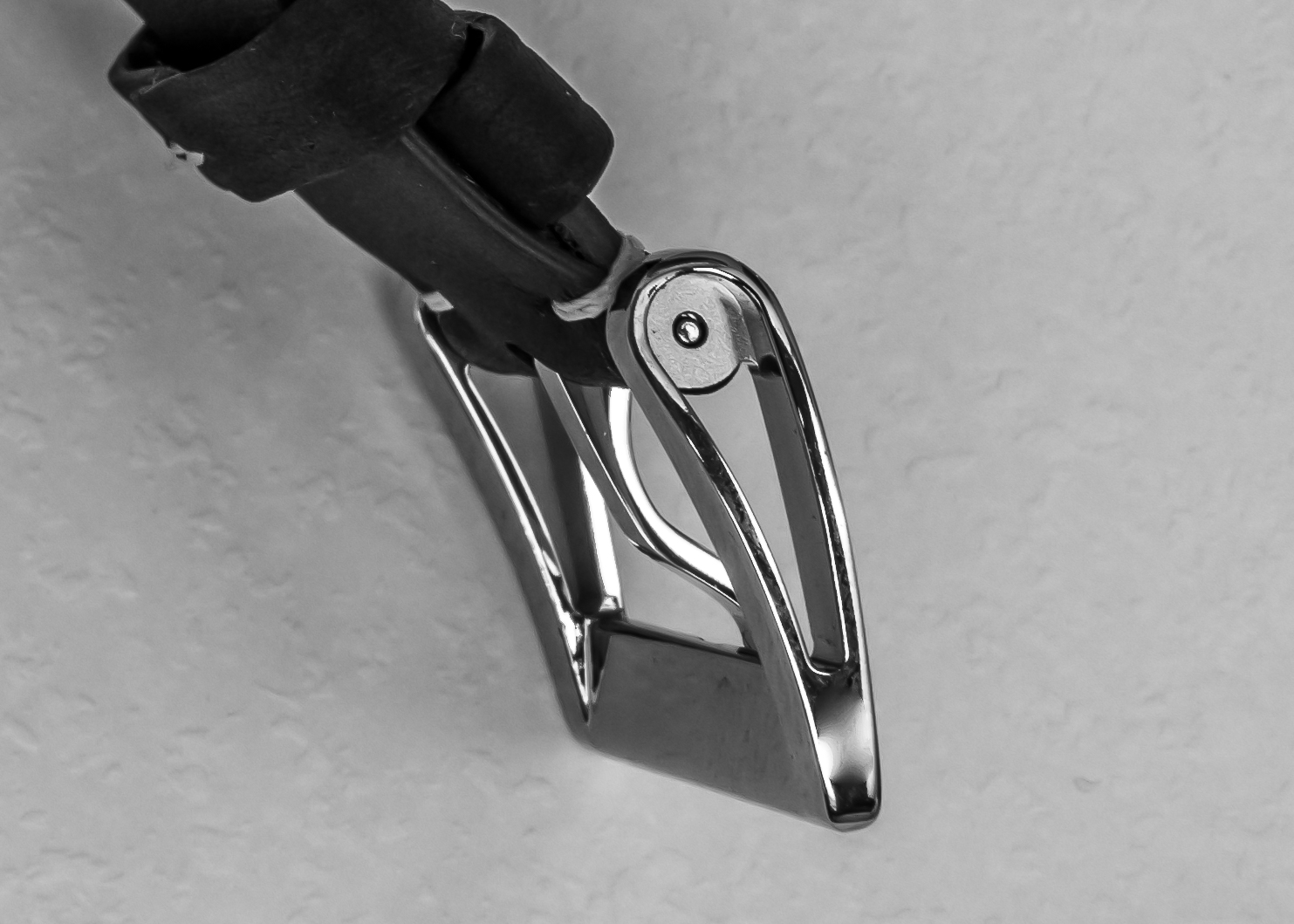 Having silvery white hour markers deeply etched against the brushed gray chapter ring creates a sense of depth that is almost like a sandwich dial, which is somewhat ironic when you remember that the 27.01 has no lume. The openworked hour and minute hands are wonderfully minimalist, and I appreciate the touch of the little circle at the tip of the minutes hand that glides perfectly over the etched track.

The case and dial of the Ming 27.01 (50M water-resistant) are meticulously done and a testament to how far the brand has come in a few short years.  The attention to detail is everywhere — even the buckle on the strap echoes the Ming design language. 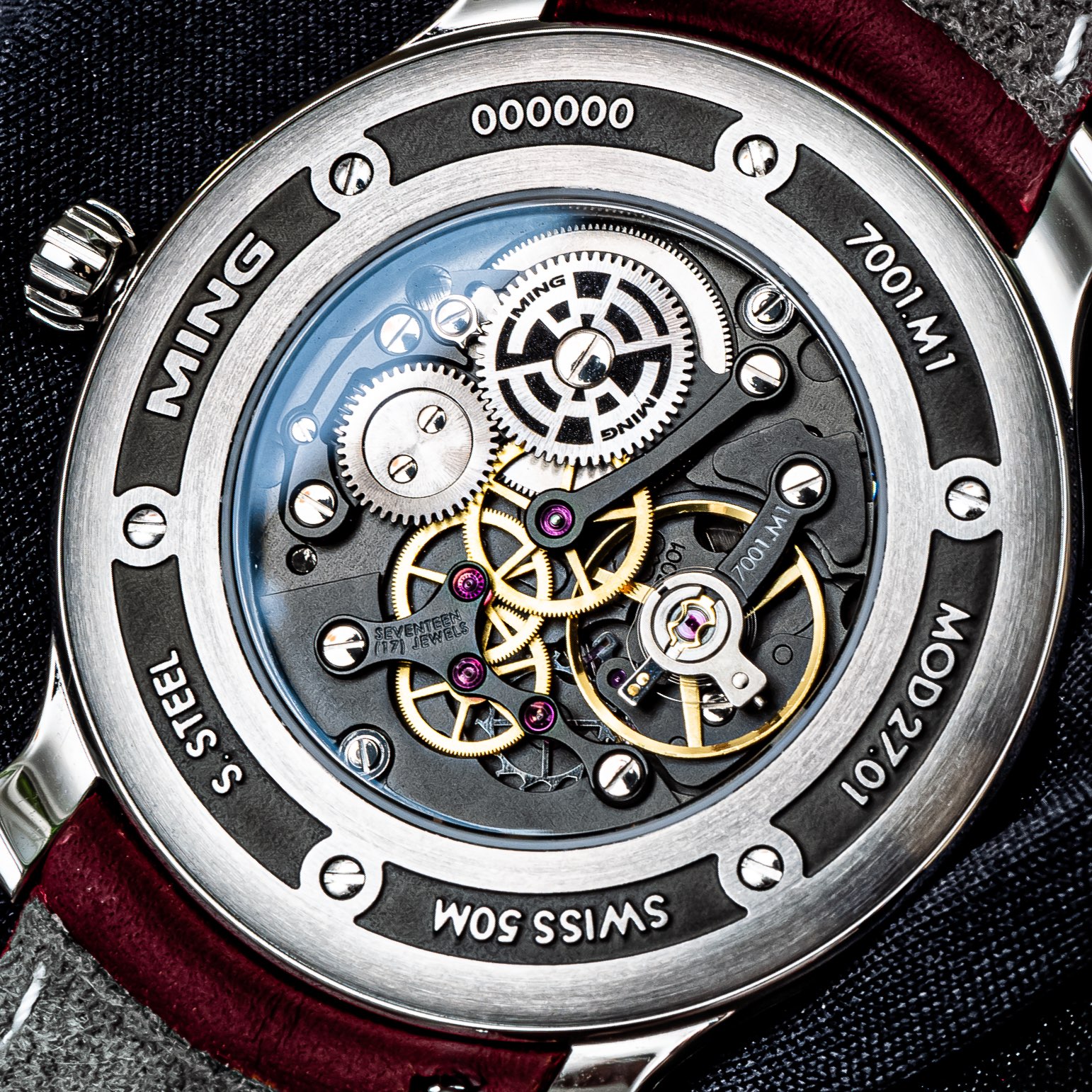 *Note that the model I photographed was a prototype, so there are one or two areas with a chip or blemish*

At release last year, Ming Thein quite rightfully pointed out that the ETA Peseux 7001 is “the only engine really available to any brand wanting to launch an ultra thin watch at a reasonable price point.” Along with its partners at Schwartz-Etienne who finished the plates and bridges, Ming did extensive skeletonization work and black chrome finishing throughout. Ultimately, only the gong train was largely left the same, while everything else was redone.

The final product, the manual-wind Ming 7001.M1, is a moody affair that warrants an exhibition caseback. Too many watch brands with more resources and bigger budgets than Ming don’t follow the Rolex model of just opting for an enclosed steel case back, choosing instead to show off soulless machine-finished movements that inspire a whole lot of nothing. Here, the black chrome-plated surfaces create a moody and distinctive movement that measures just 2.5mm thick. 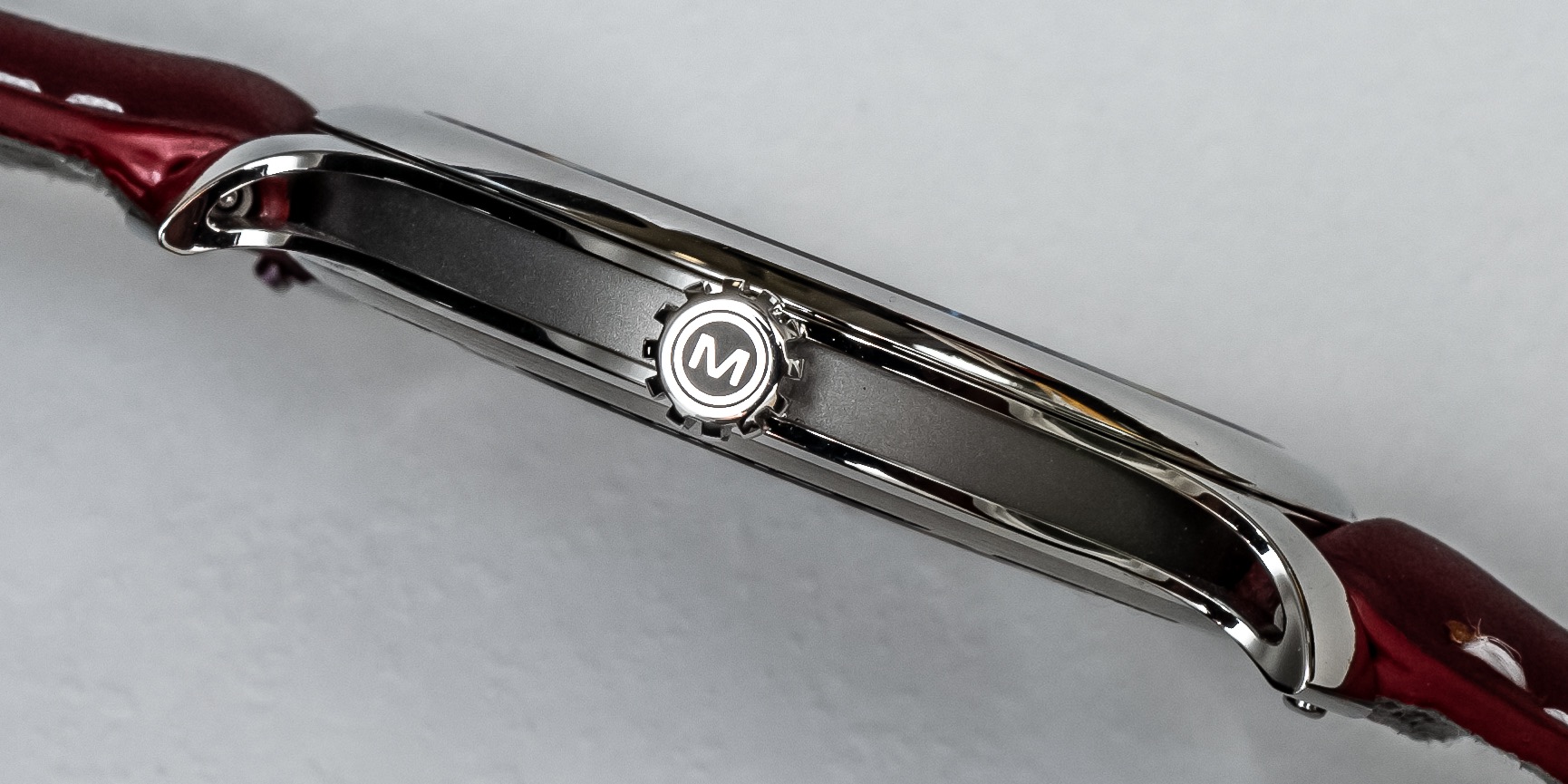 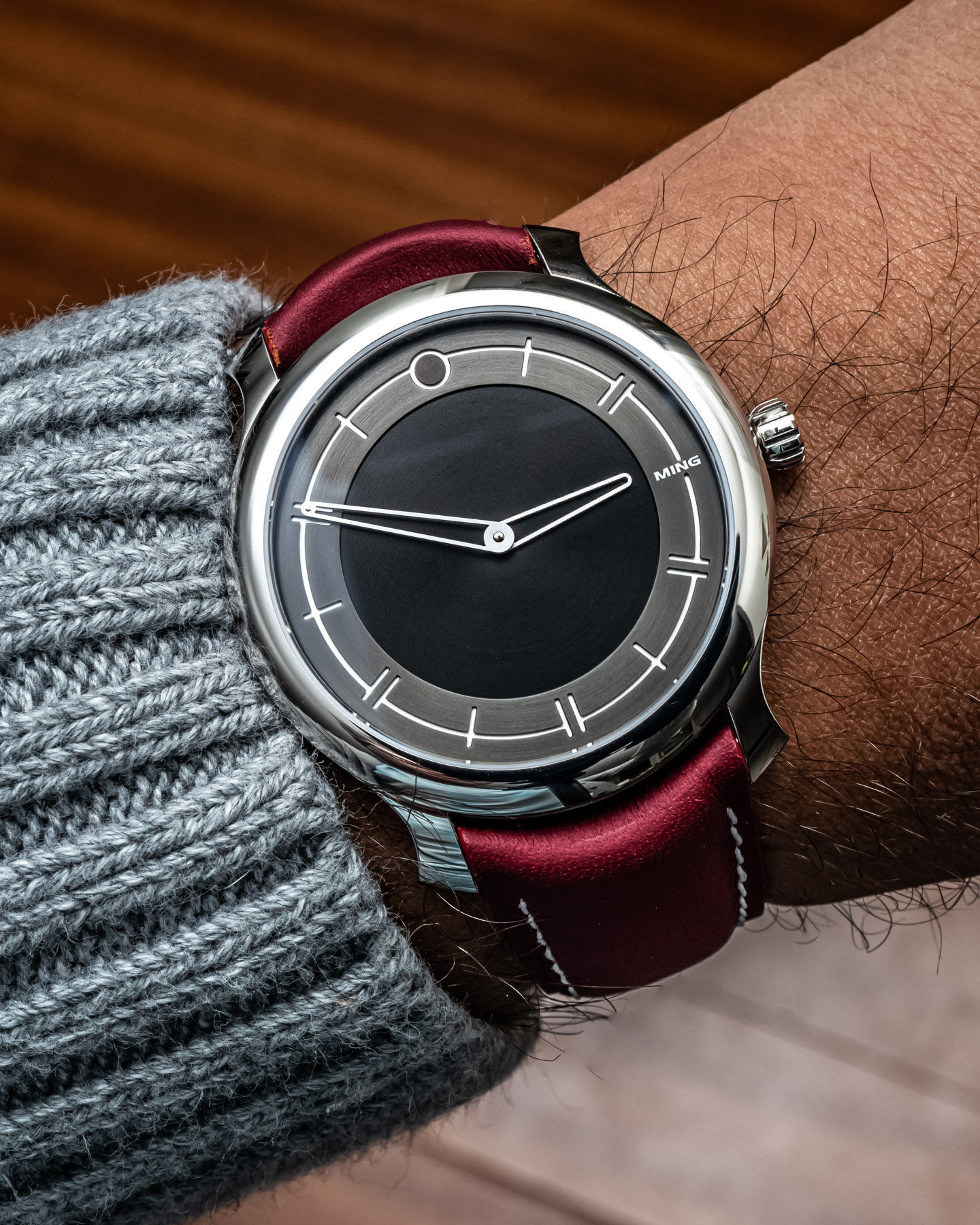 A wonderful example of extra-thin minimalism, the Ming 27.01 is already in the rear-view with the recent release of its follow up 27.02. As such, this final batch will most likely be the final production, and it only leaves me wanting more. Priced at 3,950 CHF, the final run of the Ming 27.01 will be available January 22 at 3am GMT (January 21, 7pm PST) here at ming.watch.