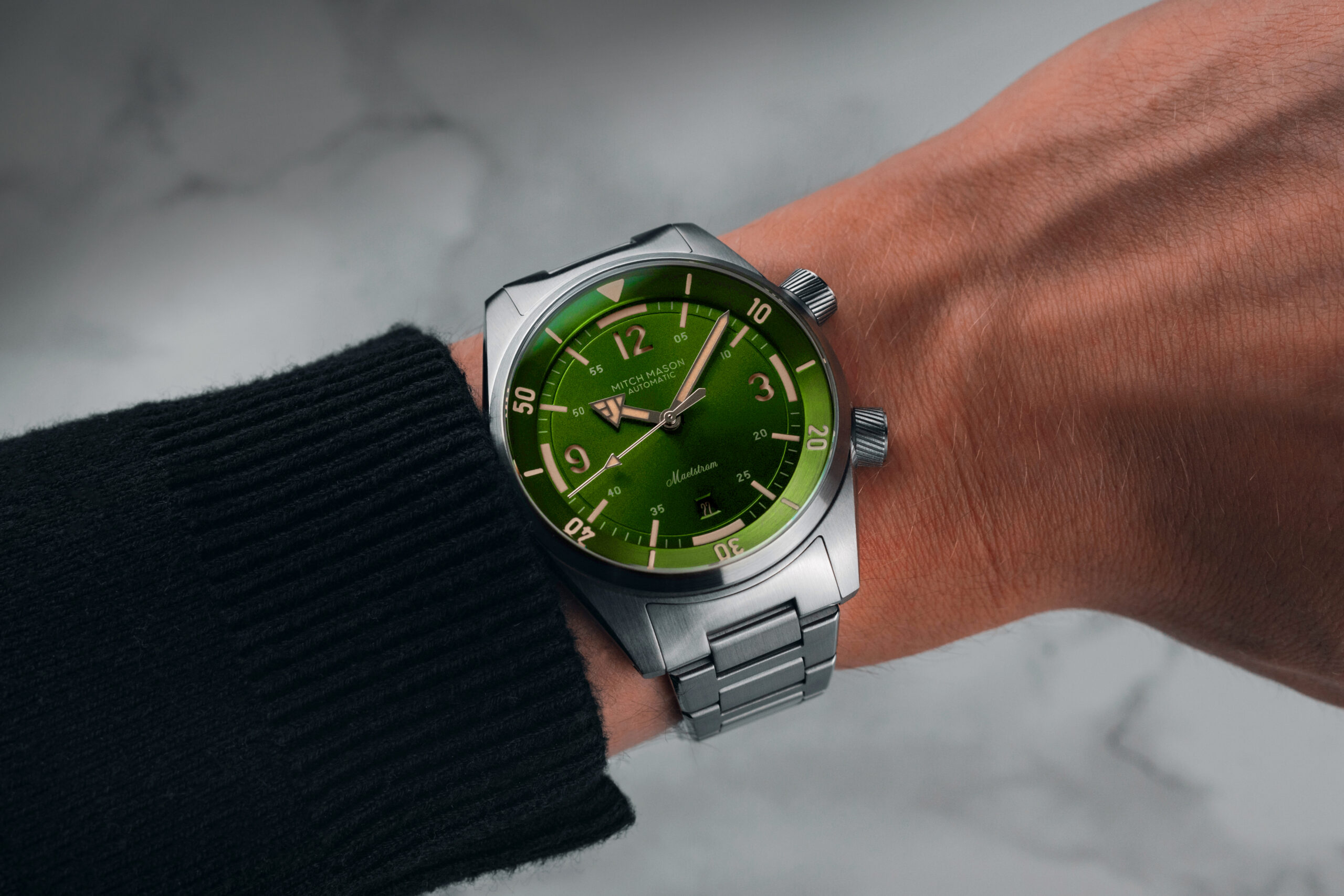 16 Comments
by SponsoredPost
Sponsored post presented on aBlogtoWatch for advertiser

In the vast ocean of microbrand dive watches, new species seem to pop up with fast-paced frequency. The typical field marks of these aquatic timepieces are well known and thoroughly documented — rotating external bezel, protective crown guards, and vintage design cues seem to be par for the course. The new Maelstrom from Mitch Mason builds upon the trend, but with a distinct nod to a novel diver design from the past. 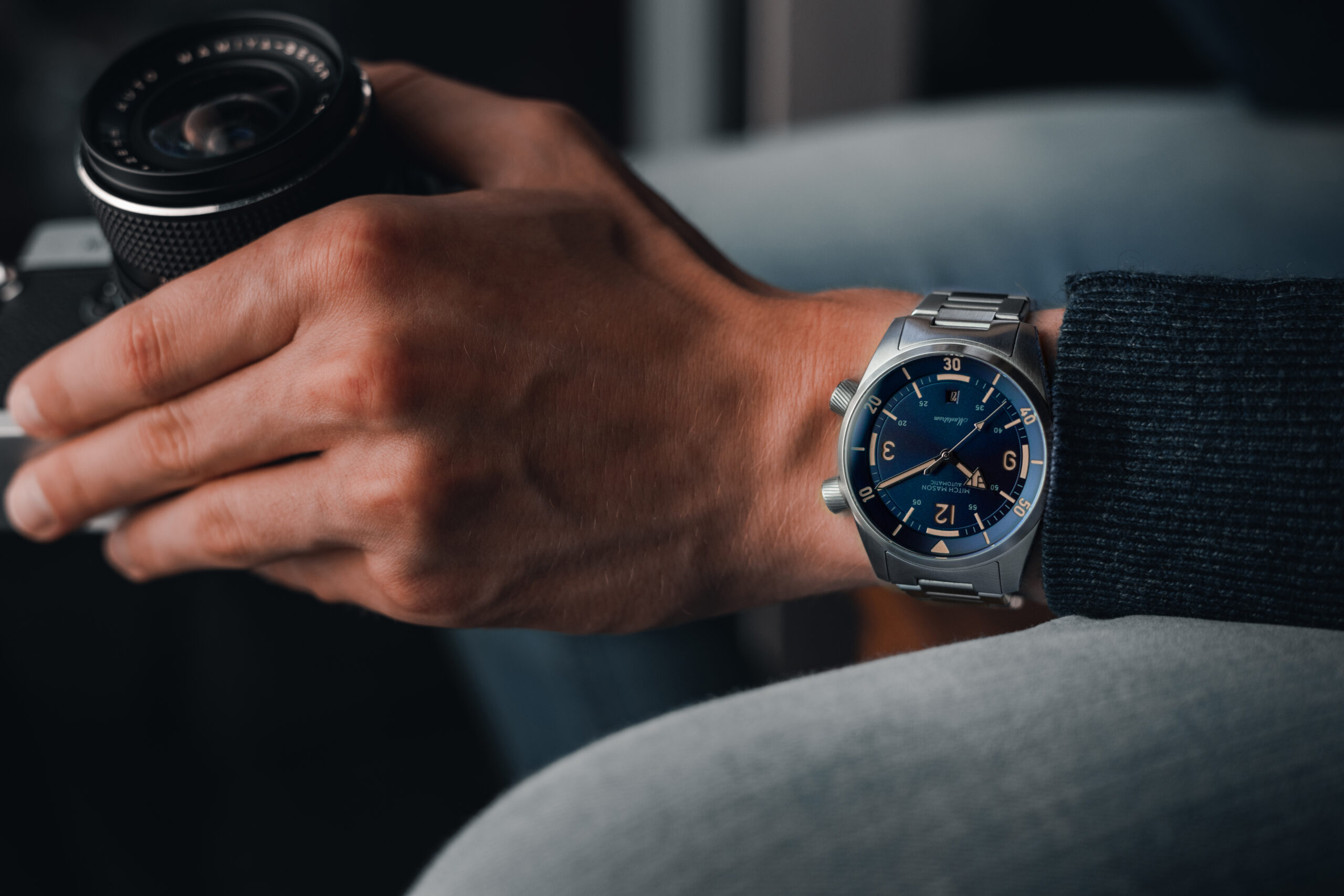 Based in Singapore, Mitch Mason made waves in 2020 with the introduction of its flagship model, the Chronicle. This fresh take on a field watch featured a sandwich dial, old radium lume, and a style unlike that of competitors on the market. Through this release, founder Benedict Ong set a precedent for his brand that is built upon a foundation of aesthetics and artisanship. The mission of Mitch Mason revolves around the concept of deviating from the perceived norms of watchmaking. Despite this intention to avoid predictable conventionality, quality is of the utmost importance. Each timepiece reflects and incorporates vintage aesthetics without becoming a carbon copy of previous iterations. In the case of the new Maelstrom, the appearance references super-compressor style with distinct Mitch Mason modifications to make it 21st-century capable. 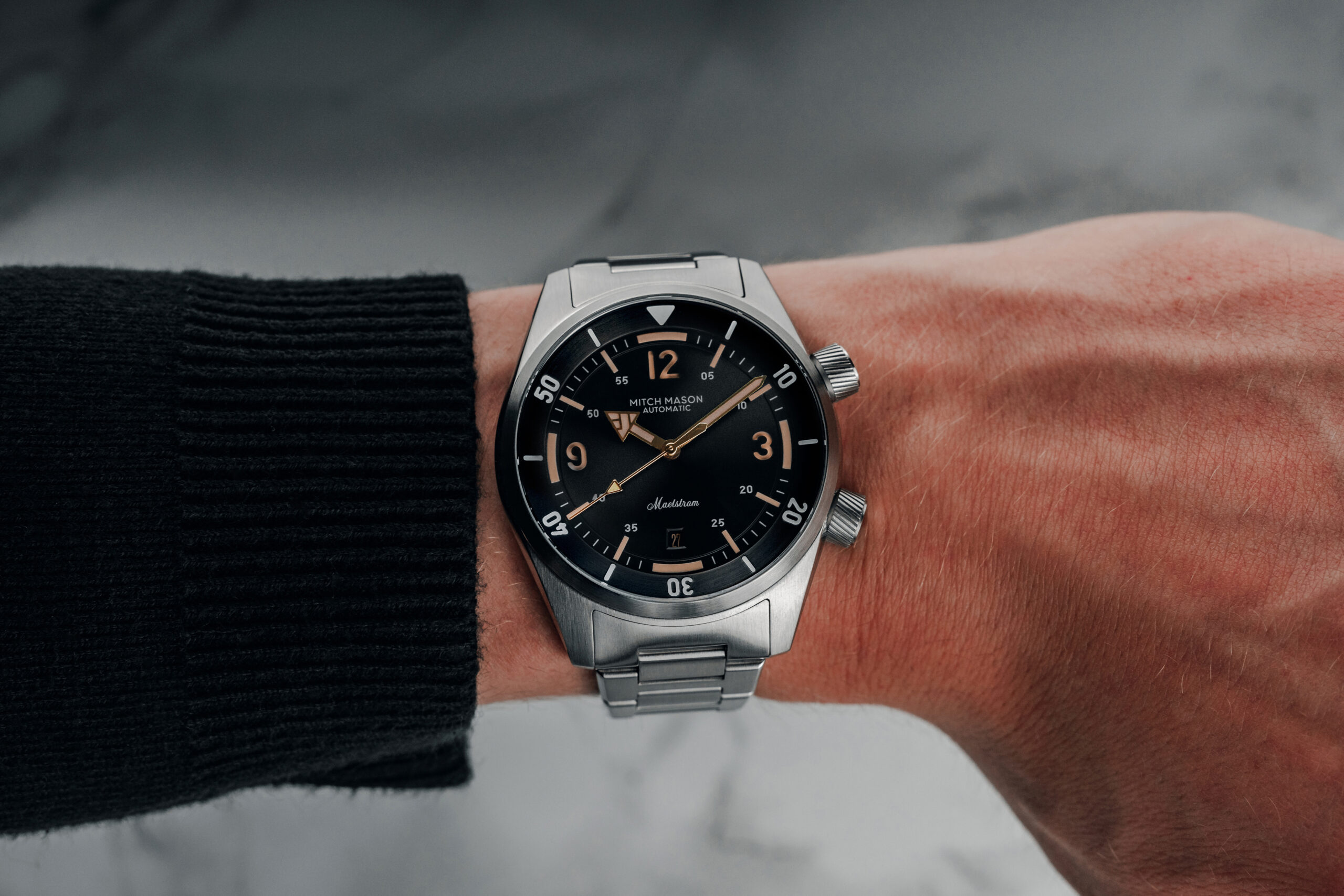 In the 1950s, skin-diving was a favored pastime of those interested in sand, sun, and surf. During this time, the budding emergence of SCUBA pushed watch manufacturers to manifest new technologies and applications that allowed timepieces to handle the added pressure of deep diving. Originally developed by Ervin Piquerez S.A, “super compressors” are named for the inclusion of a compression-spring mechanism in the caseback that allows the watch to compress with additional pressure. This compression formed an even tighter seal to prevent water intrusion, serving as a brilliant way to ensure that EPSA-cased divers could handle the rigors of pelagic pursuits. A calling card of the super compressor, historically, is the combination of two pronounced, cross-hatched crowns and an internal rotating bezel. Mitch Mason’s Maelstrom has incorporated this timeless style while taking full advantage of contemporary materials and technology.

When life gets hectic, and you find yourself in the eye of the storm, you can rest assured that the Maelstrom is up to the task. Measuring in at 40mm in diameter, it is just the right size for ideal legibility without becoming gratuitous. The gradual slope of the lugs provides ergonomic comfort when combined with the manageable lug to lug length of 47mm. Mitch Mason has managed to achieve 300 meters of water resistance while maintaining an unassuming height of just 12mm. This is made possible by the use of a super-anti-reflective, double-domed sapphire crystal, along with a solid stainless steel caseback, and dual screw-down crowns. Each of these is signed with the company logo and features machined lines to allow for superior grip – an important aspect to consider when creating a functional dive watch. 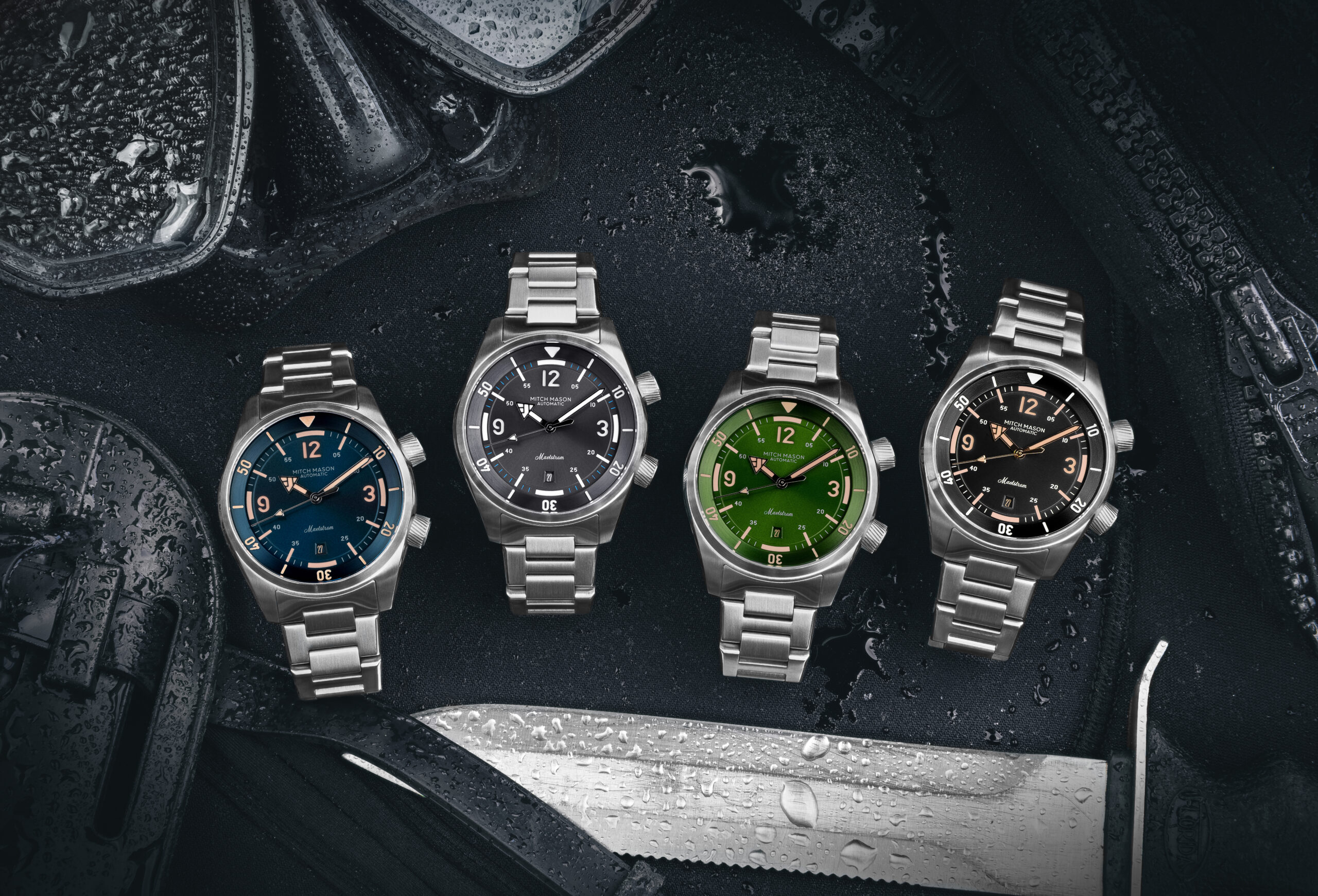 The Maelstrom comes in four distinct colors, each with its own allure. For a more subdued sunburst tone, Aphotic Black, Steel Blue, and Ocean Grey are understated and neutral, making them easy to pair with any occasion. The black dial features a combination of Old Radium Super-LumiNova on the hands and dial with whitened numerals adorning the internal rotating bezel. This is also the only colorway to utilize gilt handsets, which is always en vogue when paired with the inky depth of the dial. Steel Blue is a deep and elemental hue that matches nicely with the aged appearance of the lume. The gray dial, on the other hand, opts for white BGW9 lume throughout. A touch of blue is utilized for the minute markers, which perfectly complement the metallic sheen of the dial. 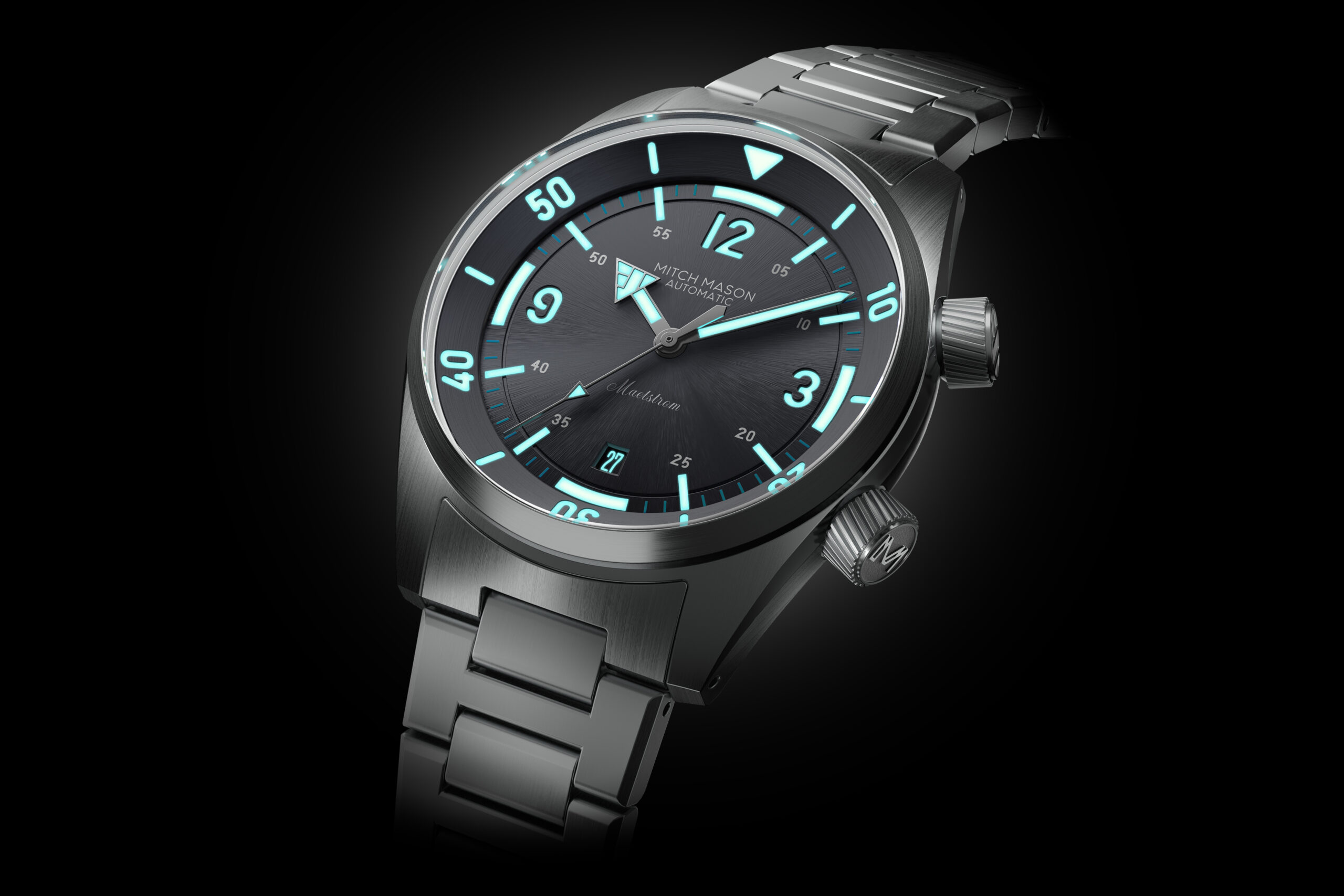 Where the previously stated colors fly under the radar, Marimo Green stands out as the most striking of the quartet. Named after otherworldly orbs of moss native to lakes and rivers throughout Japan and Europe, this verdant dial is a total stunner. The signature knot-style hour hand, unique to Mitch Mason models, is well incorporated and makes for easy time-telling at a glance. Similarly, the large sandwiched numerals at 3, 9, and 12 o’clock add further legibility. 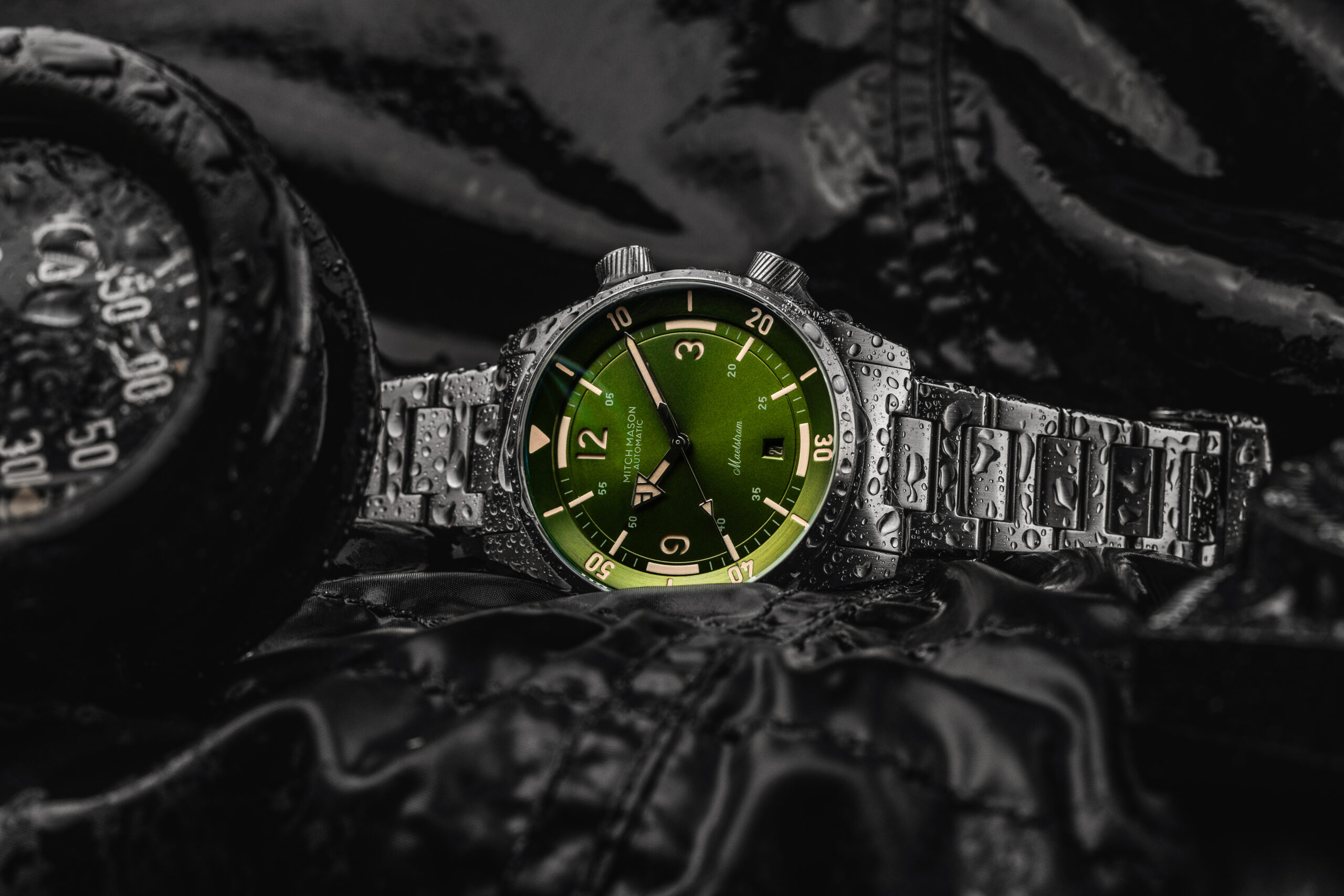 Each Maelstrom features a color-matched inner rotating bezel and 6 o’clock date function. The choice to apply uniform tones throughout the timepiece allows for the utility of the date function without detracting from the beat of the timepiece. It’s a small detail that, for many, makes a big difference. It speaks to the degree of thought put into the Maelstrom lineup. This forethought is equally evident in the use of drilled lug holes, quick-release springbars, and a bracelet that tapers from 20mm at the lugs to 16mm at the clasp.

The Maelstrom is powered by the 24-jewel Miyota 9015 self-winding movement. This tried and true workhorse runs at 28,800 beats per hour and is good for up to 42 hours of power reserve when fully wound. Protecting this vital component is a 316l stainless steel caseback that is 3D-stamped with a majestic humpback whale — fitting for a powerful tool watch meant for exploring the vast world beneath the waves. The Maelstrom is set to launch in October via Kickstarter for a super early bird price of $449 USD, making it a compelling value proposition, especially for anyone interested in a non-traditional style of dive watch.