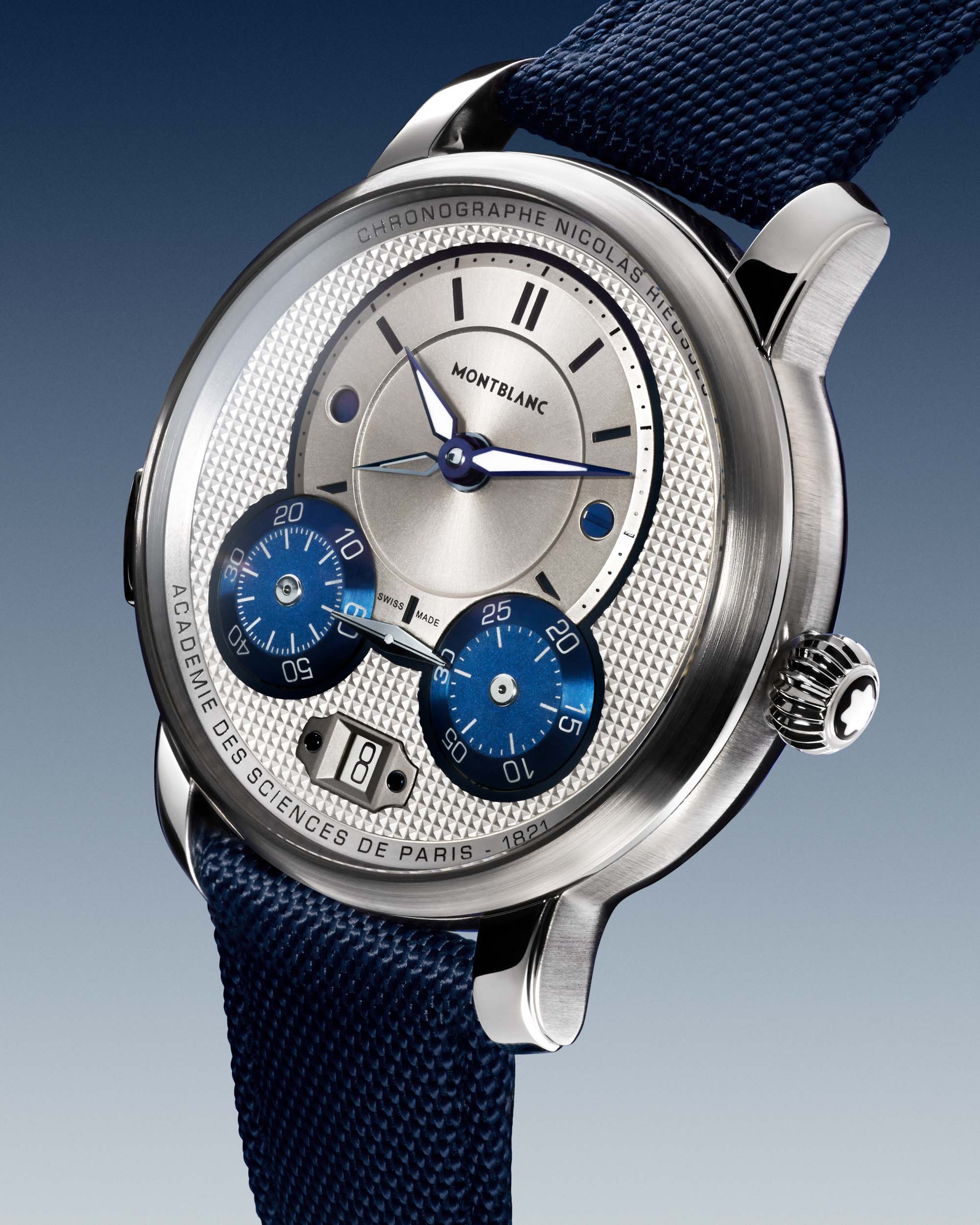 The word “chronograph” is now used to describe nearly all watches that offer additional stopwatch capabilities, but the term actually has its origins way back in 1821, and it is a combination of the Greek words “chronos” (meaning “time”) and “graphein,” which means to write. Created by Nicolas Rieussec (1781-1866), who was the sixth royal watchmaker to the King of France, the very first chronograph was not a wristwatch at all, but rather a box-shaped timing device created for the world of horse racing that allowed users to accurately and scientifically record the timing of races by using a fixed nib that would place a drop of ink on two rotating counters (one for the minutes, the other for the seconds) each time that a horse would cross the finish line. Since 2007, Montblanc has produced modern chronograph wristwatches that are inspired by the design of Rieussec’s original timing device, and while none of various models have dropped liquid ink onto their dials like the original as a means of recording the time, the latest two additions offer a number of Paris-themed design elements as a nod to the birthplace of the “chronograph” name, and they represent thoroughly modern renditions of the brand’s Nicolas Rieussec Chronograph wristwatch, with one version produced as a limited edition of 500 pieces. 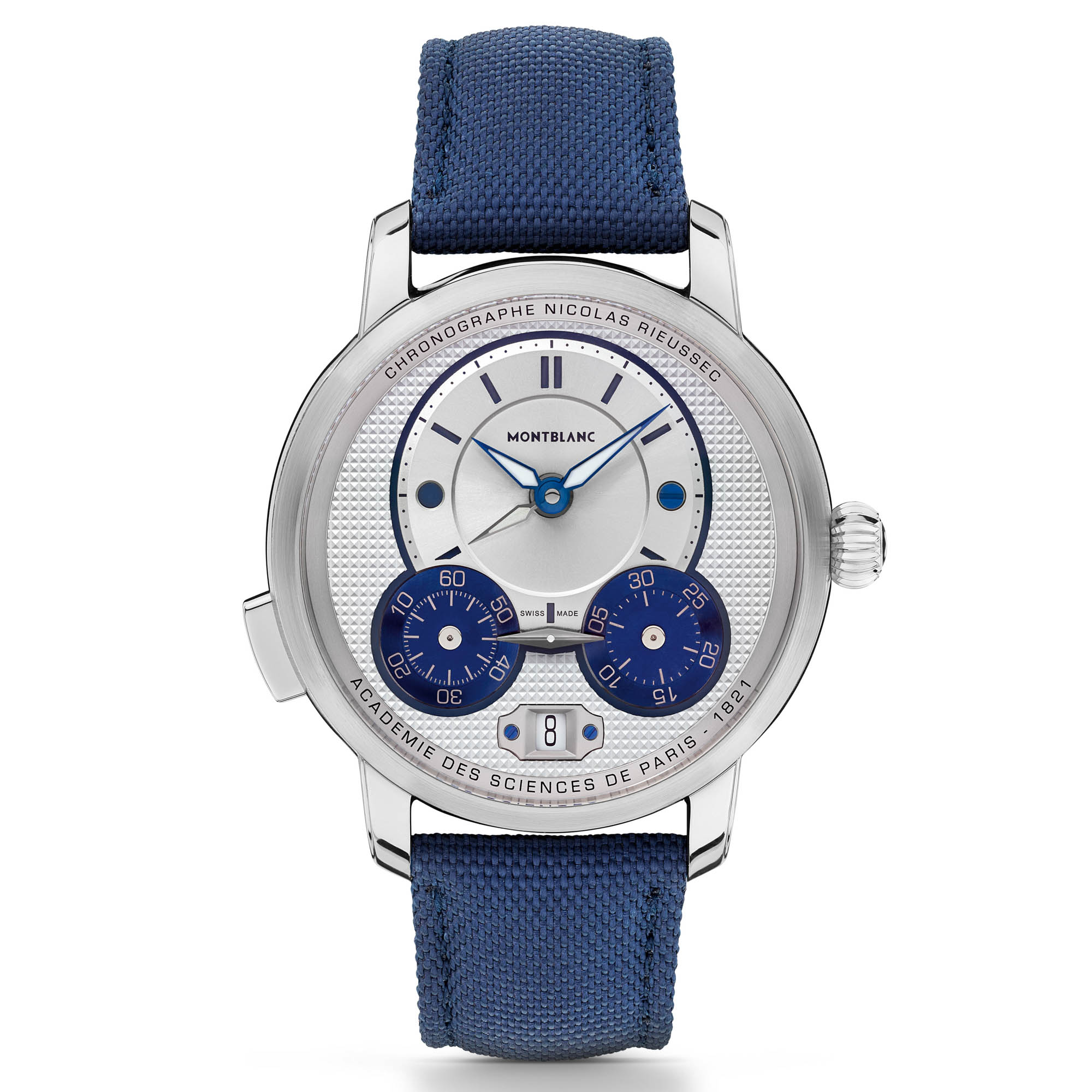 The pebble-shaped cases of both models are crafted from stainless steel and measure 43mm in diameter by 15.01mm thick. While most people would consider 43mm to be a fairly substantial watch, these new Montblanc Star Legacy Nicolas Rieussec Chronograph models represent a decrease in case size compared to the previous edition, which featured a 44.8mm case. Additionally, while the stainless steel case of the standard production model is finished with alternating brushed and polished surfaces, the limited edition version has been given a black DLC coating that compliments the dark color palette of its dial. Both models feature onion-shaped winding crowns at the 3 o’clock location, with the model’s signature large rectangular pusher protruding from the sides of the cases at the 8 o’clock position. Similarly, both models feature domed sapphire crystals with double anti-reflective coatings, and while both versions of the new Rieussec Chronograph feature display casebacks, the limited edition version features a semi-transparent tinted sapphire crystal window, while the standard production version is fitted with the traditional clear variety. Water resistance for the new Montblanc Rieussec Chronograph watches is a fairly standard 50 meters, and both models are completed by blue textile straps with “Clou de Paris” patterns and stainless steel triple folding clasps, with the limited edition model receiving a black DLC-coated clasp to match the finish of its case. 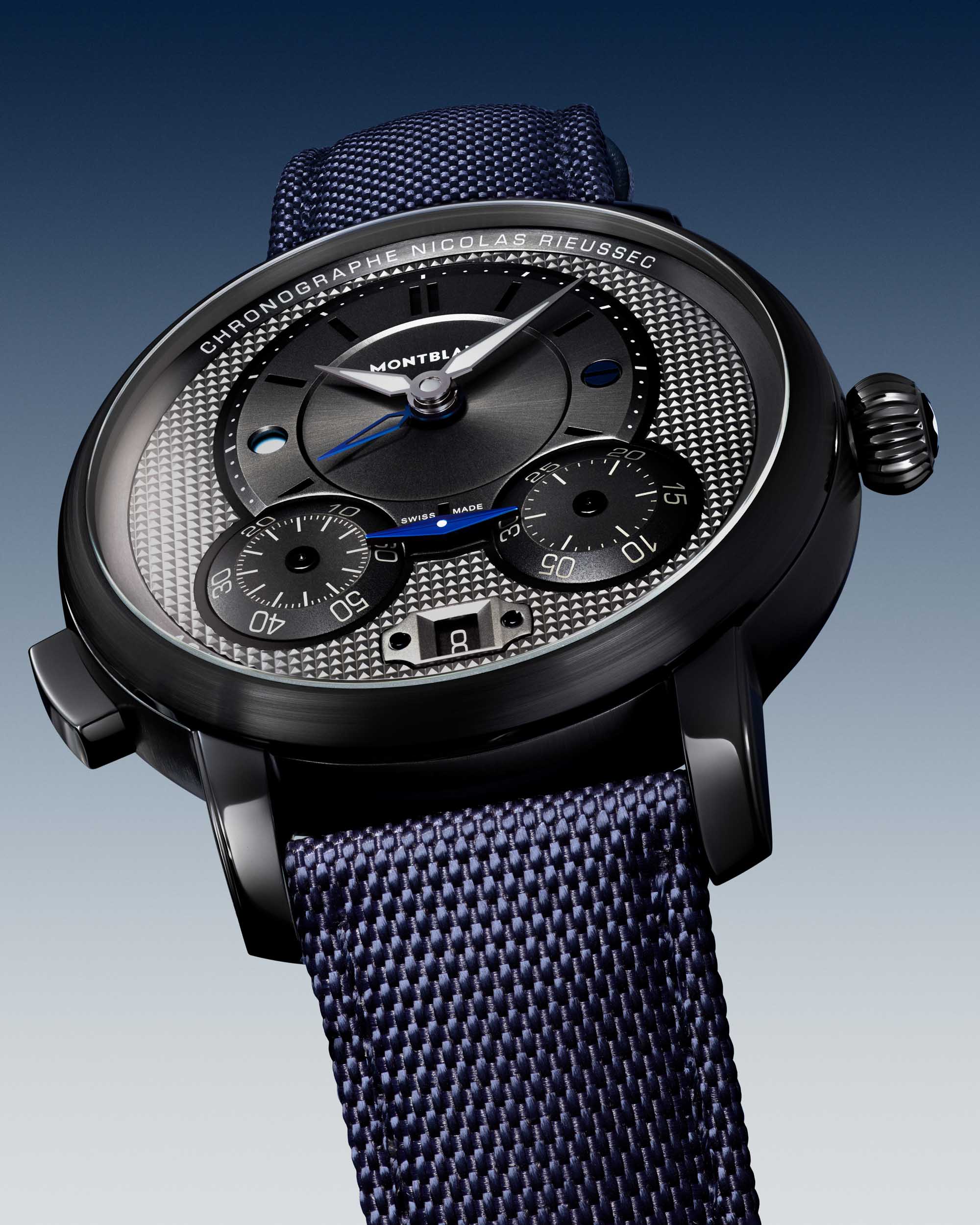 To further emphasize their connection to Paris, both versions feature a “Clou de Paris” pattern (Paris hobnail) on their dials, which replaces the “Grain d’Orge” design seen on the previous edition and even extends to their oscillating weights. The overall layout of the dial remains the same as previous Nicolas Rieussec models, with the time displayed by the large register at the top of the dial, with the chronograph represented by the two rotating titanium discs below it. At the 6 o’clock location is a date window, and the Montblanc Star Legacy Nicolas Rieussec Chronograph also offers dual time functionality presented by a secondary hour hand on its time-telling dial and a day/night indicator subtly placed at the corresponding 9 o’clock location. 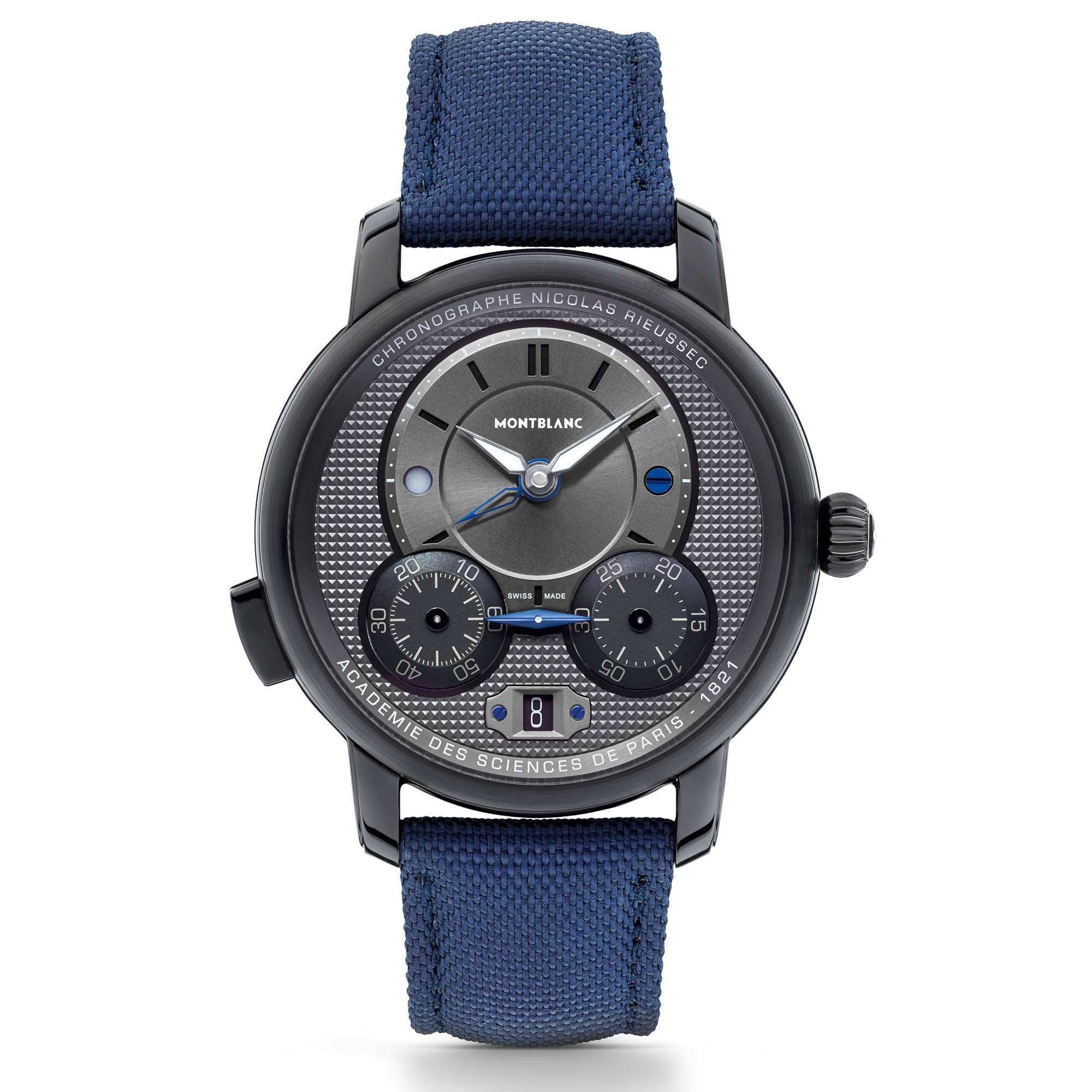 The chronograph display is the signature feature of the Rieussec model, and rather than featuring registers with hands to display the time, the chronograph features a pair of rotating titanium discs (one for measuring elapsed minutes, and the other for counting the corresponding seconds) with a single fixed hand simultaneously pointing to the current amount of elapsed time on both of them. The overall design is reminiscent of Nicolas Rieussec’s original device, and both of the new watches feature blue design elements as a subtle reference to the liquid ink that would have been dropped on the rotating discs of the original timing contraption from 1821. While the standard production version offers a silver dial with a number of blue design elements including the hands, chronograph discs, and screws attaching the dial furniture, the only splashes of blue on the limited edition model are its skeletonized secondary timezone hand and single double-sided chronograph indicator hand, with the rest of the dial offering a deep black color that compliments the DLC finish of its case. 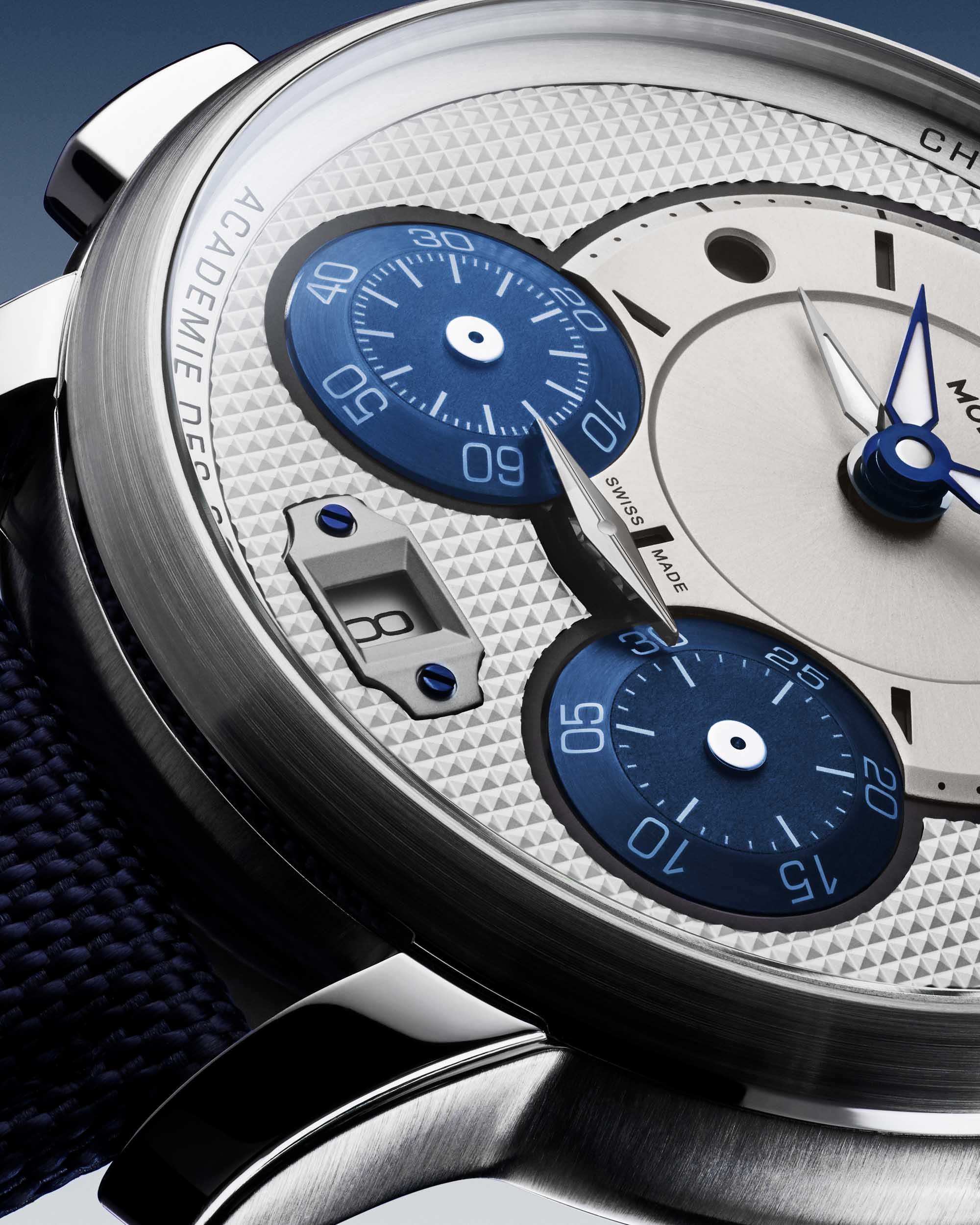 Powering the Montblanc Star Legacy Nicolas Rieussec Chronograph is the brand’s in-house Caliber MB R200 automatic chronograph movement, which measures 31mm in diameter by 8.46mm thick, and features 40 jewels and a total of 319 individual components. In addition to offering a rather unconventional disc-oriented display for the elapsed time counters, the Montblanc Cal. MB R200 is a monopusher chronograph with dual-time functionality, and it also holds the distinction of being the brand’s very first in-house movement design. A column wheel controlled chronograph with a vertical clutch, the Caliber MB R200 also offers a rapid-reset mechanism for the hour hand and date display, which allows it to quickly be set either forwards or backwards without changing the position of the minute hand, making it perfect for frequent travelers who frequently cross time zones. With its timekeeping governed by a large 10mm balance wheel sitting within a transverse balance bridge, the Montblanc Cal. MB R200 movement runs at a frequency of 28,800vph and it also features a double barrel construction that provides it with a power reserve of approximately 72 hours. 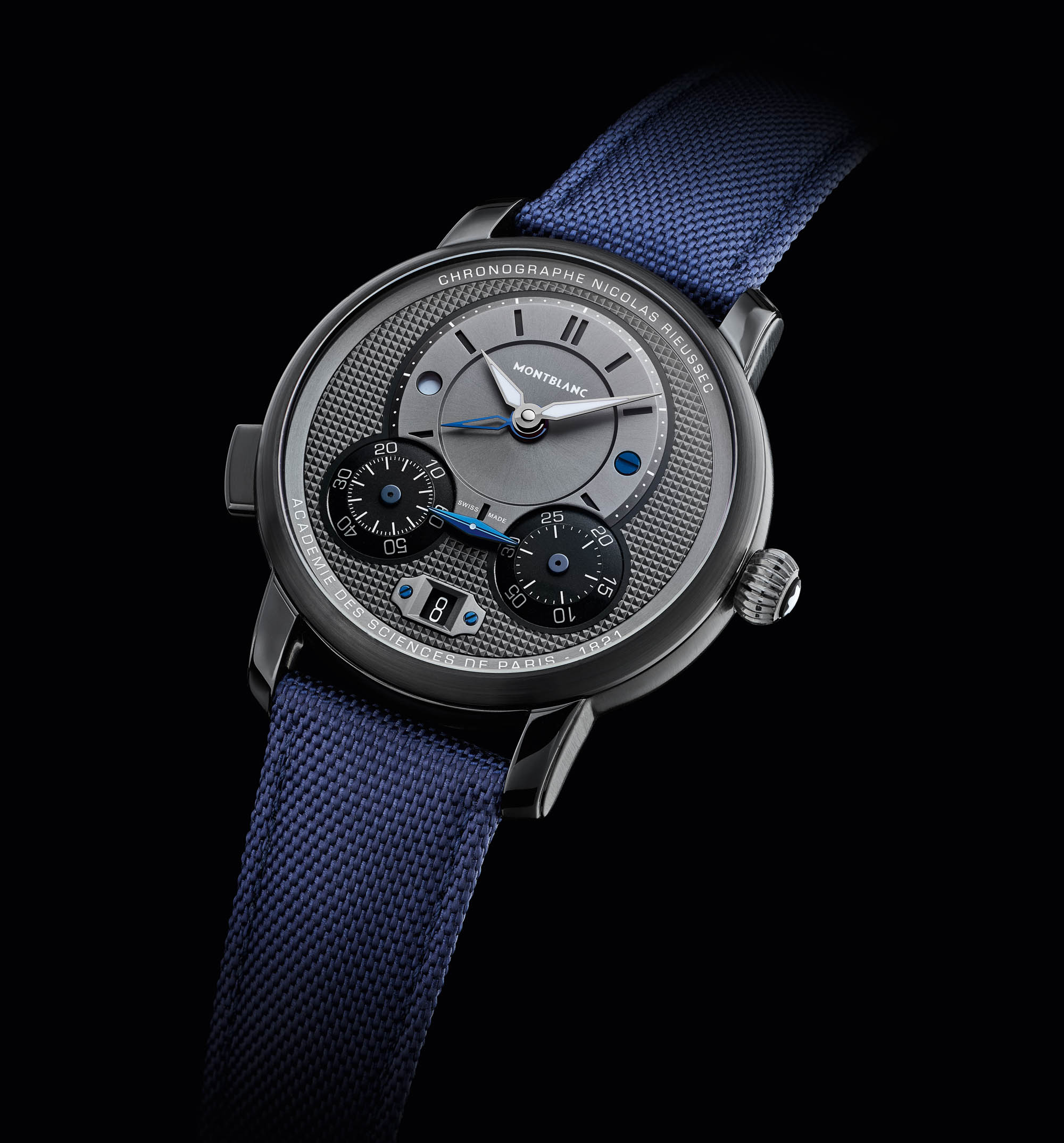 Neither monopusher chronographs nor dual time watches are typically the most affordable kinds of timepieces, and in many instances, getting the two of these complications together in the same watch will set you back a minimum of five figures. However, the new Montblanc Star Legacy Rieussec Chronograph is accompanied by an official retail price of $8,200 USD for the standard-production model, or $8,600 USD for the 500-piece limited edition version with the black DLC-coated case. Montblanc’s other monopusher chronograph watches all have prices that start out just above the $5k price point, meaning that the Rieussec Chronograph is one of the more expensive non-Minerva models that doesn’t have a precious metal case. With that in mind, it is also one of the most complex models in Montblanc’s current-lineup, and considering that you are getting a dual time monopusher chronograph with an in-house movement from a true household name brand (plus a rather unique chronograph display), the corresponding retail price seems rather reasonable in a world where many microbrand divers are now selling for over a thousand dollars. For more information, please visit the brand’s website.