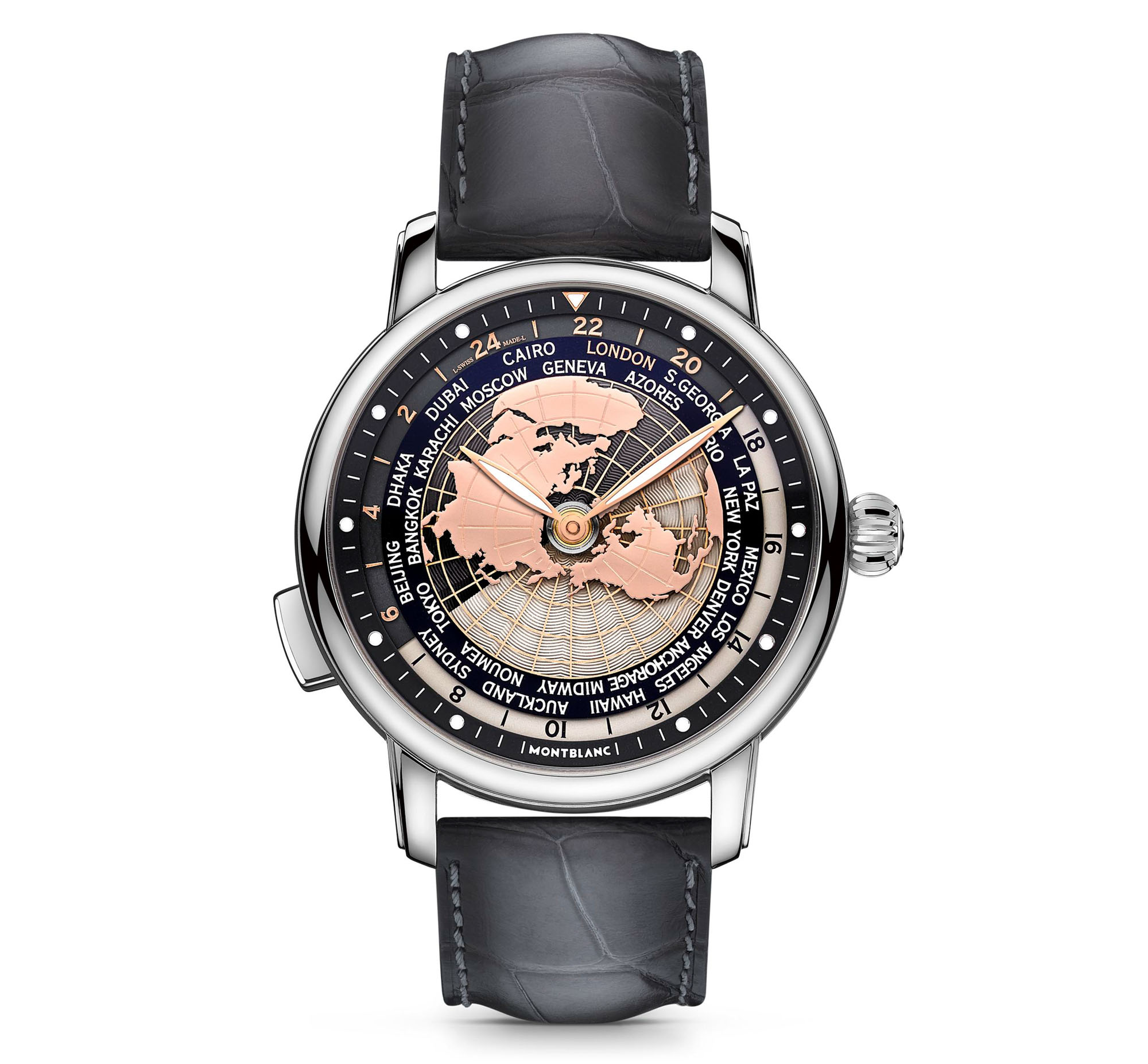 Originally launched in 2014, the Montblanc Star Legacy Orbis Terrarum is the brand’s take on an elegant world time watch. The term “Diviso Orbis Terrarum” means “circuit of the world” in Latin, and it was the name given to a mythical map that was created by the Roman general Marcus Vipsanius Agrippa during the first century AD. While no known copies of the legendary world map are believed to have survived, its spirit now serves as the inspiration for Montblanc’s world timer that offers the time in 24 different time zones around the world. The first version of Montblanc Star Legacy Orbis Terrarum that debuted in 2014 featured a stainless steel case with a blue dial, while the follow-up edition was characterized by its brown dial and solid rose gold case. Although the third version was green and limited to 71 pieces exclusively for the United Arab Emirates, this fourth version combines a stainless steel case with a gray and rose gold dial for a contemporary twist on one of the brand’s fan-favorite designs. 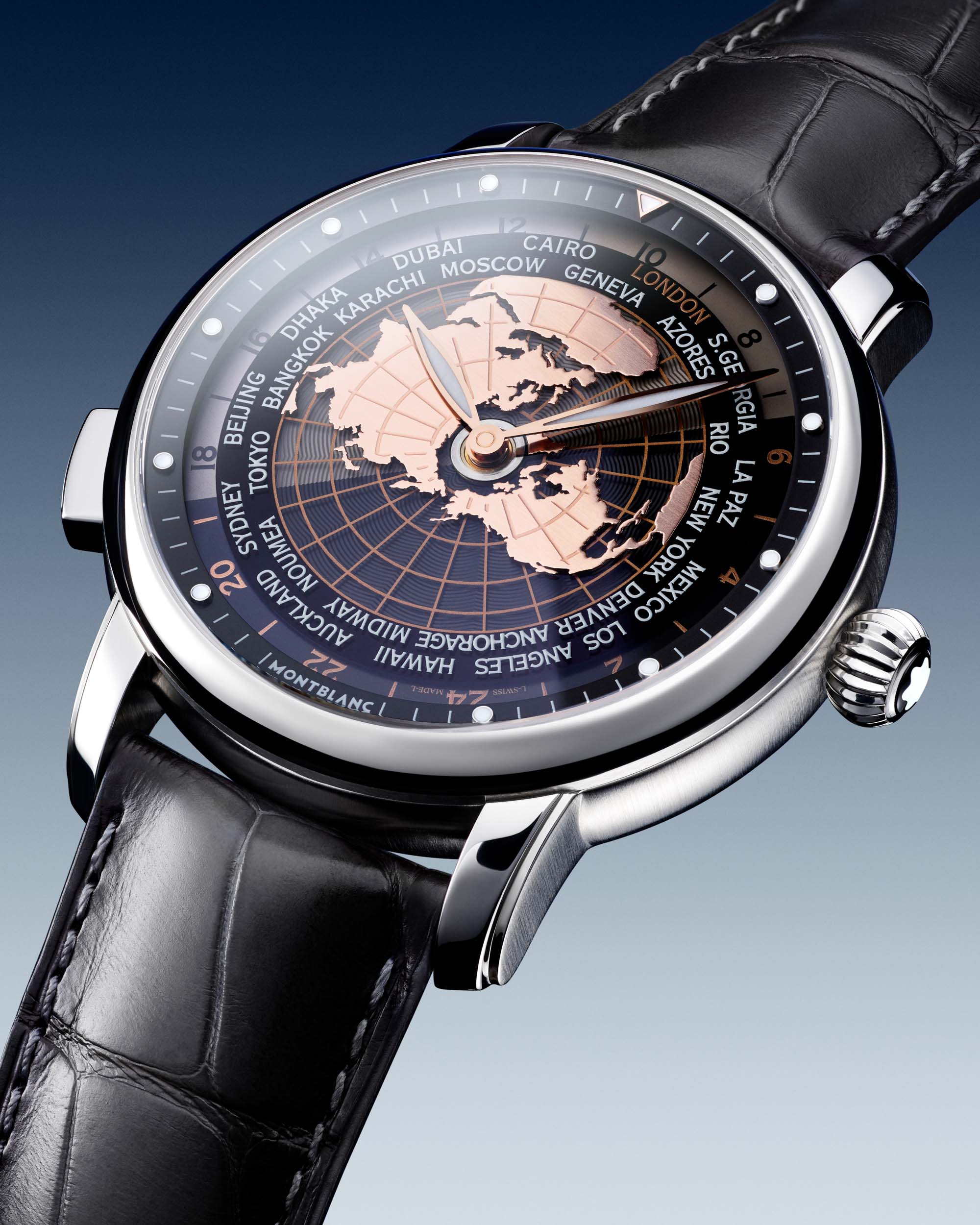 Just like previous editions of the Montblanc Star Legacy Orbis Terrarum, the new model features a pebble-shaped stainless steel case with brushed and polished surfaces that measures 43mm in diameter by 13.84mm-thick. Additionally, just like the three previous versions, the new Montblanc Star Legacy Orbis Terrarum watch features a screw-on display caseback and a domed anti-reflective sapphire crystal above its dial. At the 3 o’clock location resides a fluted onion-shaped winding that is signed with a black and white Montblanc logo, while a rectangular pusher sticks out of the side of the case at the 8 o’clock location and grants access to the watch’s world time feature. Despite being a dress watch, the Montblanc Star Legacy Orbis Terrarum features 50 meters of water resistance to help offer sufficient protection against any incidental contact, while fitted to the 21mm lugs is a gray Sfumato alligator leather strap with a semi-matte finish that is completed by a stainless steel triple-folding clasp. 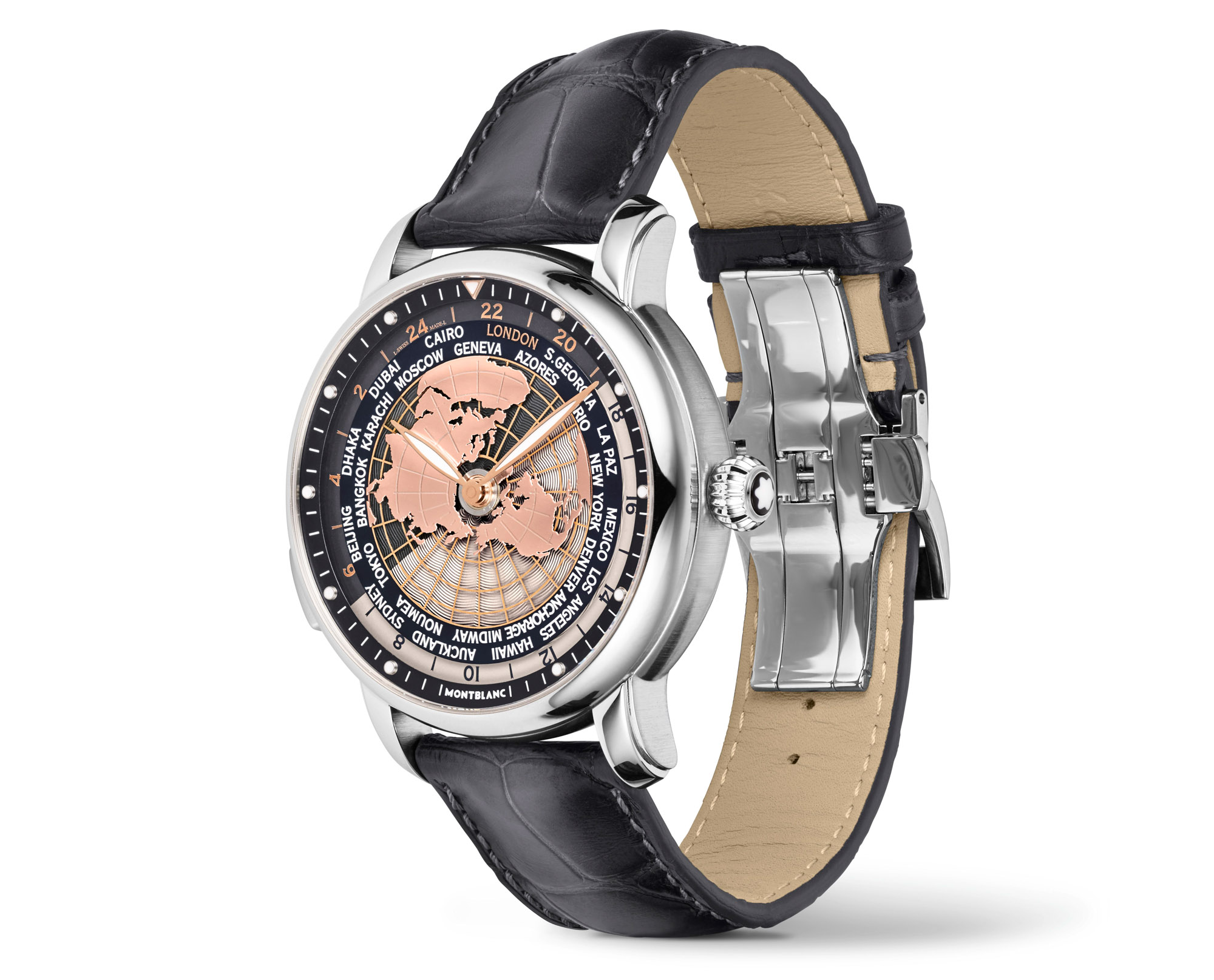 Realistically speaking, the new Montblanc Star Legacy Orbis Terrarum is essentially a new dial variation of the brand’s existing world time watch, yet the updated color palette of the new dial does create a significantly different overall aesthetic that is both more modern and dressy than any of the previous three executions. Like previous editions, the dial consists of a pair of centrally-mounted hands for the hours and minutes, with a series of rotating discs surrounding it that contain the names of 24 different cities, along with a corresponding 24-hour scale. The dial itself consists of two layers, with the upper section constructed from transparent sapphire crystal with applied rose gold coated outlines of the world’s contents as seen from the North Pole. Below the transparent upper section sits a rotating split-color disc in two contrasting shades of gray to correspond with the day/night hours, and on the outermost periphery of the dial, located on the upper sapphire surface is a minute track with small circular luminous hour markers. 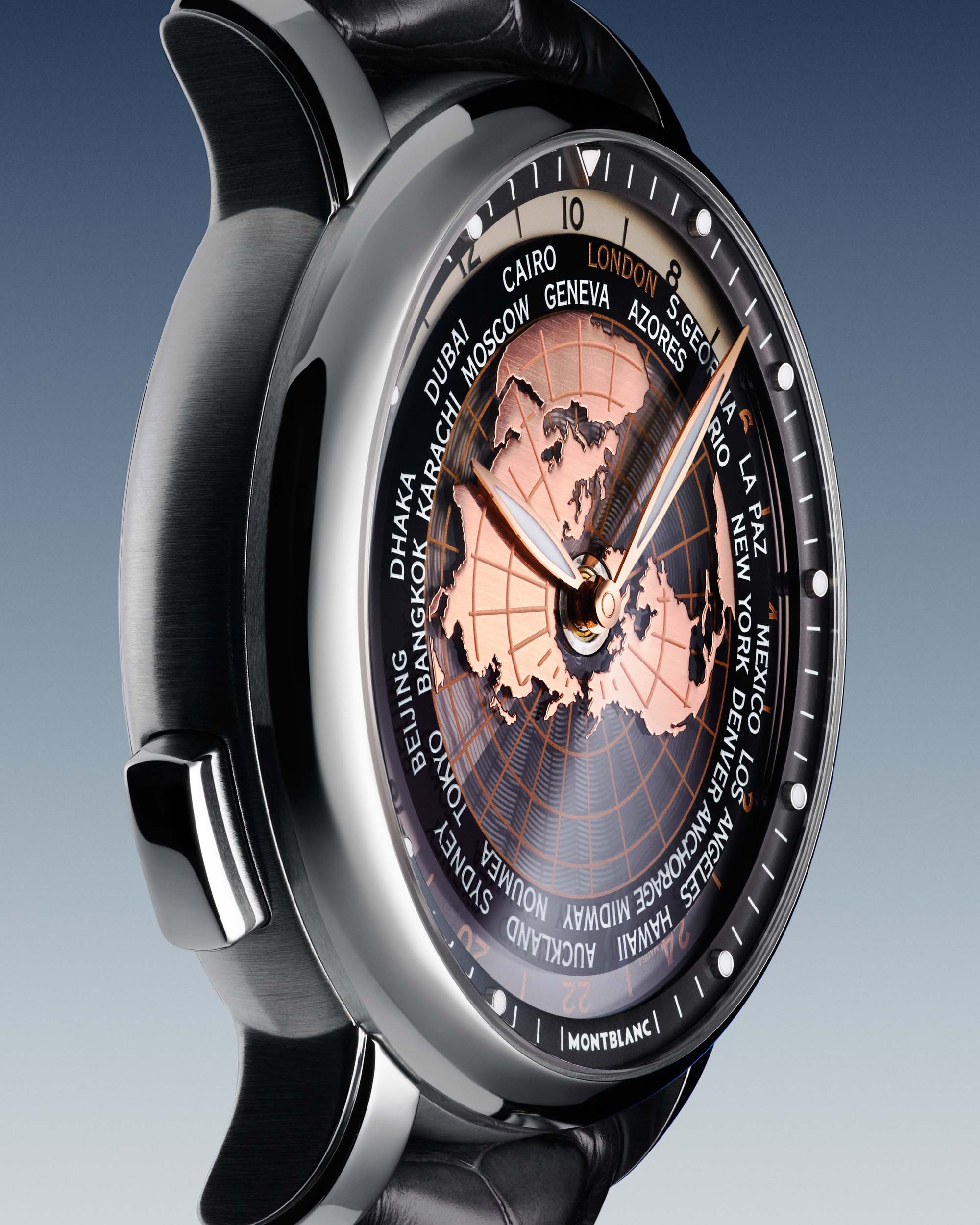 The gray and rose gold colorway is noticeably more dressy than the bright blue or green versions of the watch, while the contrasting colors of the dial offer a more striking and modern appearance than the rose gold version, which has a dial that offers largely a monochromatic color profile of gold and brown. As far as using the watch, once the Orbis Terrarum has been set, referencing the different time zones is as simple as pushing the button on the side of the at the 8 o’clock location until the desired city name appears at the top of the dial. The hour and minute hands will automatically adjust to display the time, with the 24-hour disc providing a clear indication of AM versus PM hours. 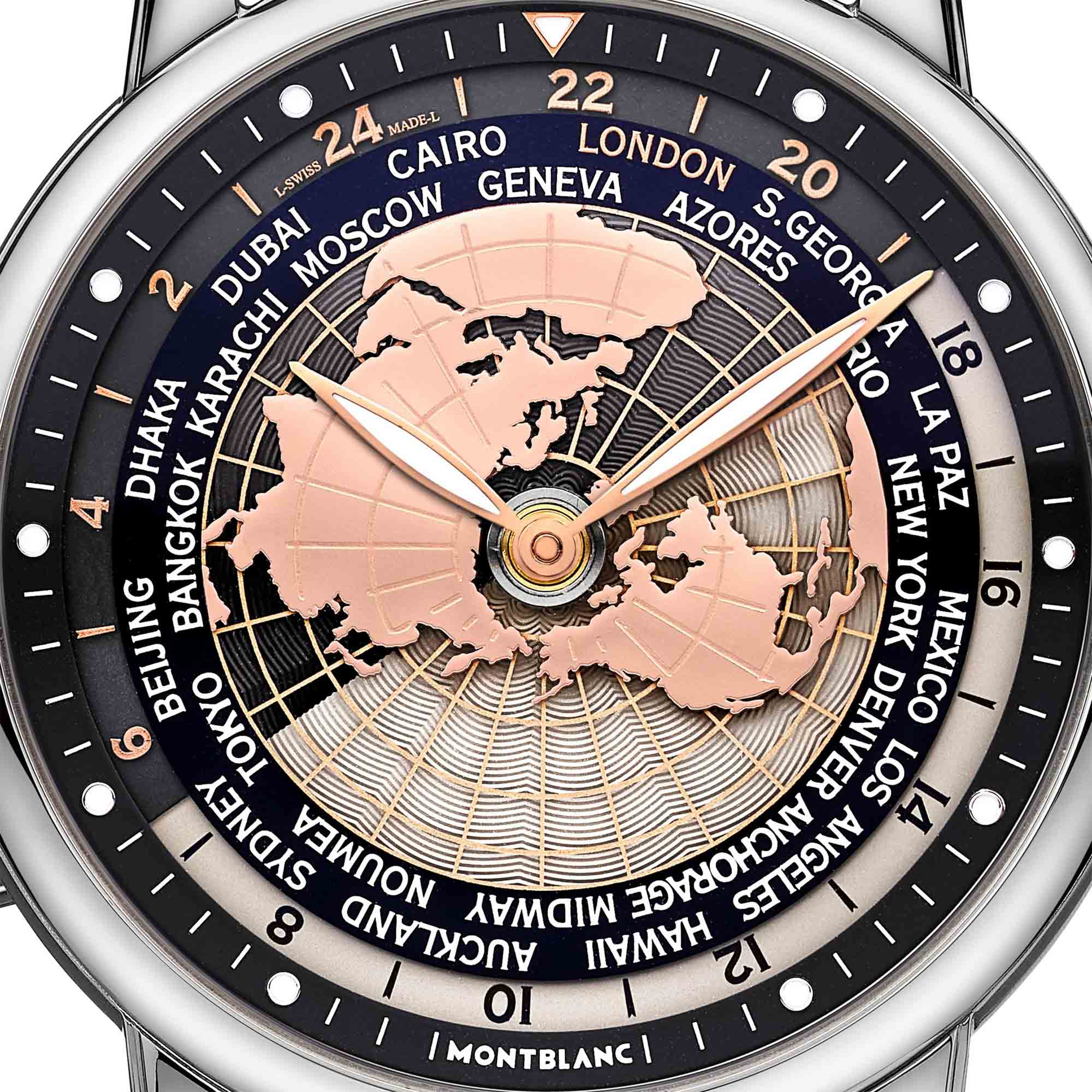 Like all three of the previous editions of the watch, the new Montblanc Star Legacy Orbis Terrarum is powered by the brand’s MB 29.20 automatic movement. Based on the core architecture of the Sellita SW 350-1, the 26-jewel Caliber MB 29.20 features the addition of Montblanc’s manufacture world-time complication that offers access to 24 time zones with an integrated day and night indicator. Similar to the Sellita movement that serves as its foundation, the Montblanc MB 29.20 runs at a frequency of 28,800vph (4 Hz) and offers users a power reserve of approximately 42 hours. Naturally, there will always be some who wish that the watch was powered by an entirely in-house movement; however, opting for a third-party base caliber fitted with a proprietary world time complication enables Montblanc to offer the Star Legacy Orbis Terrarum at a lower price point, while also guaranteeing that the watch will have a proven and easily serviceable design as its underlying foundation. 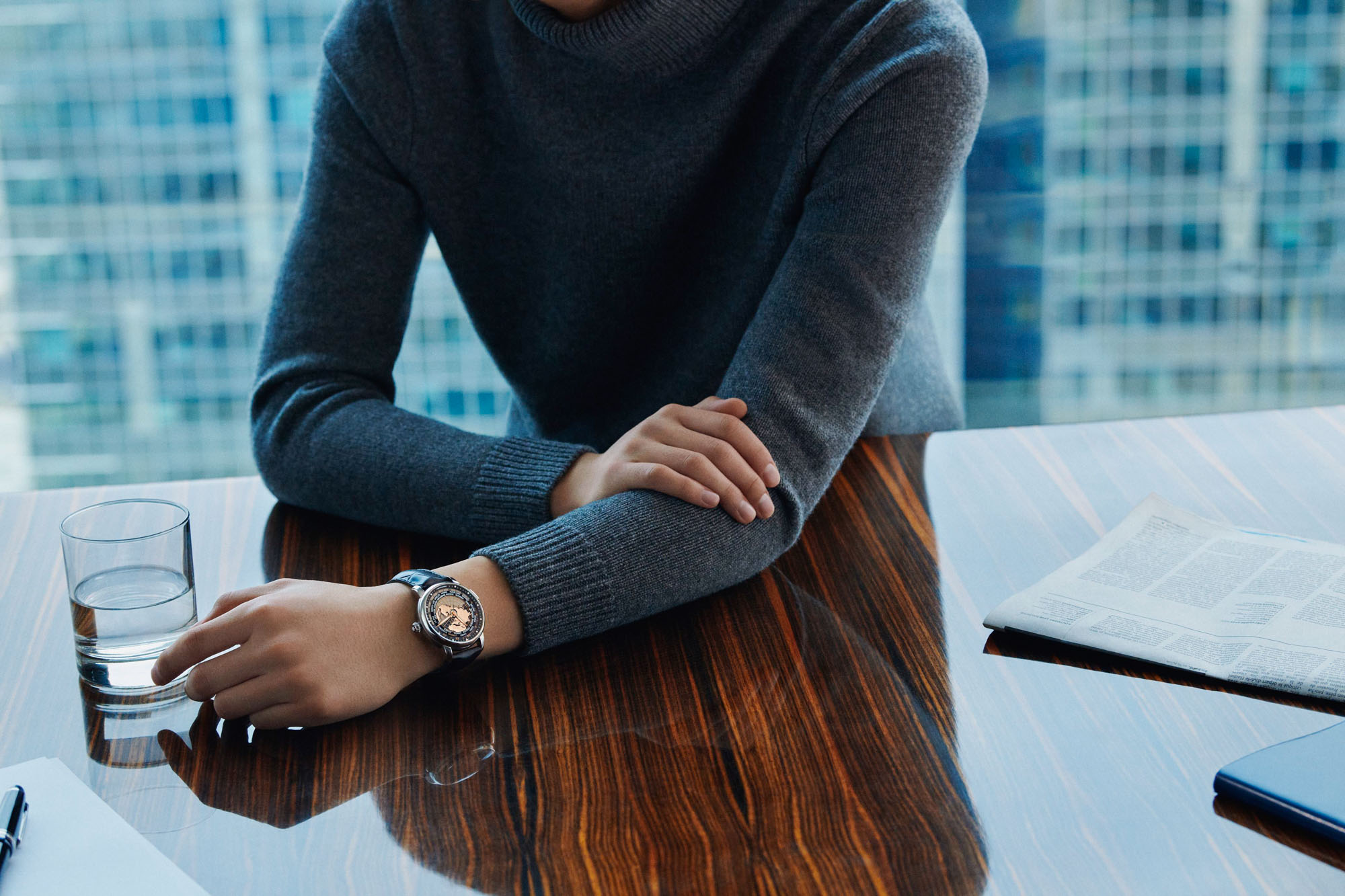 Given that the new Montblanc Star Legacy Orbis Terrarum still features a stainless steel case and is largely just a new dial variation of the existing watch, it costs the exact same as the blue dial version and is accompanied by an official retail price of $7,000 USD. This makes the Star Legacy Orbis Terrarum one of the more expensive Montblanc watches currently available, and places it right between the Geosphere world time models and the Star Legacy Nicolas Rieussec Chronograph watches, which is also pretty much exactly where it ranks in terms of its overall mechanical complexity. All things considered, the new Montblanc Star Legacy Orbis Terrarum is really just a fresh colorway for its popular world time watch, but it does offer an elevated and more formal take on what was already one of Montblanc’s most refined and dressy designs. For more information, please visit the brand’s website.