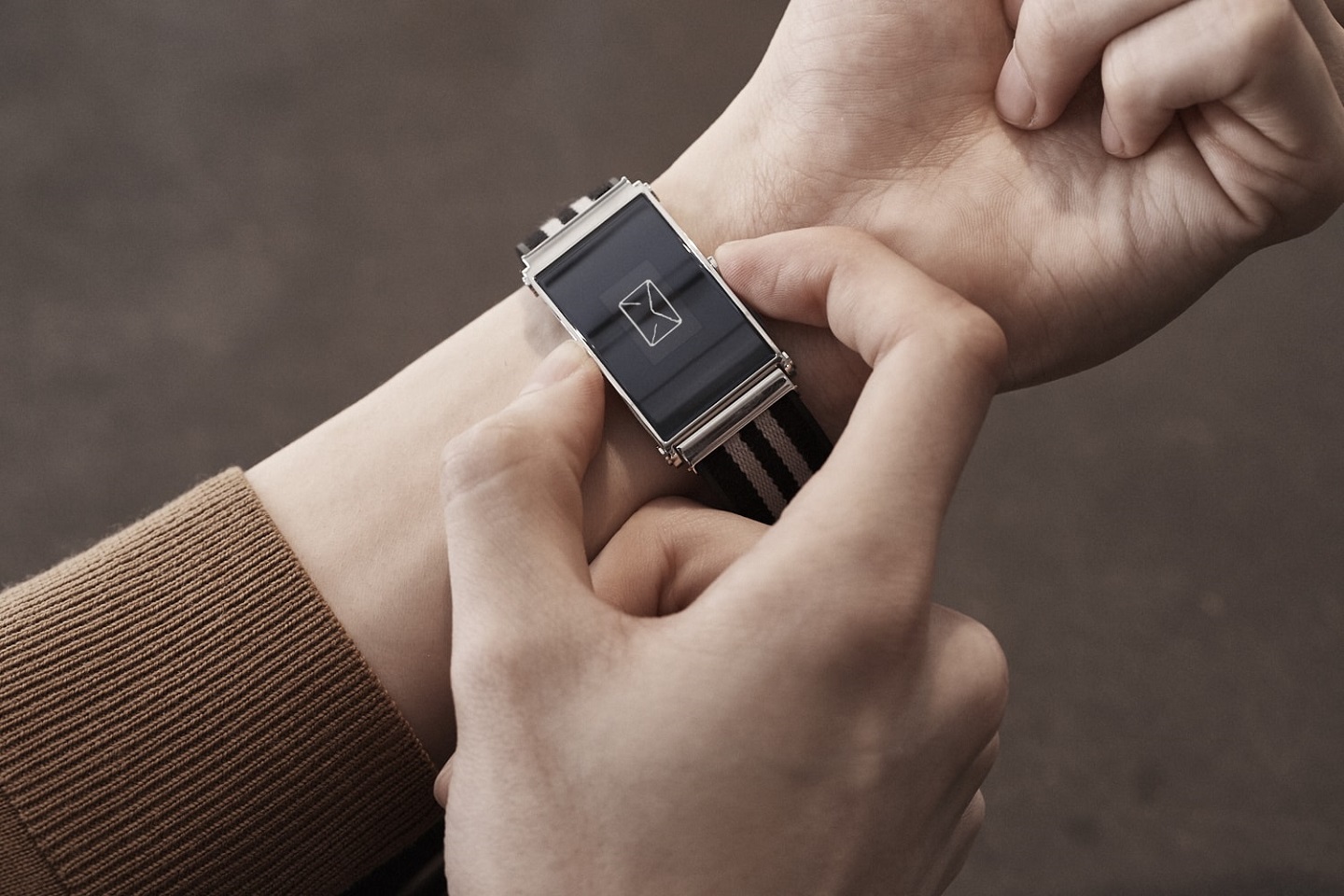 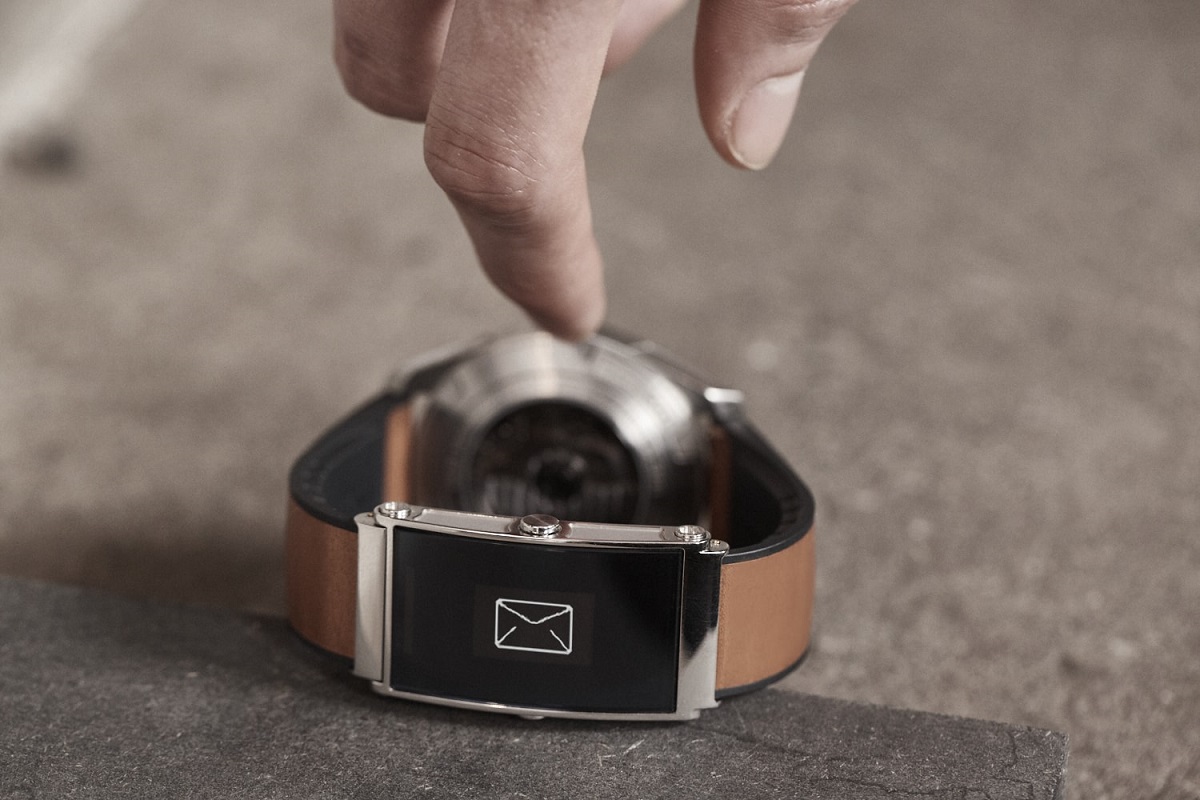 “2015 called, it wants its strap computer back.” This thought and some unintelligible mouth-noises uttered in disbelief were my first reactions when I saw this news land in my inbox. According to the brand, the new Montblanc TWIN Smart Strap is supposed to “transform traditional timepieces into connected digital companions” as well as achieve some other elevated goals… And yet, here I am, finding myself utterly challenged with getting over the fact that I’m writing about a smart strap in mid-2018. But it is what it is and I’ll try and give Montblanc and this new device the benefit of doubt as I work myself through their press release. 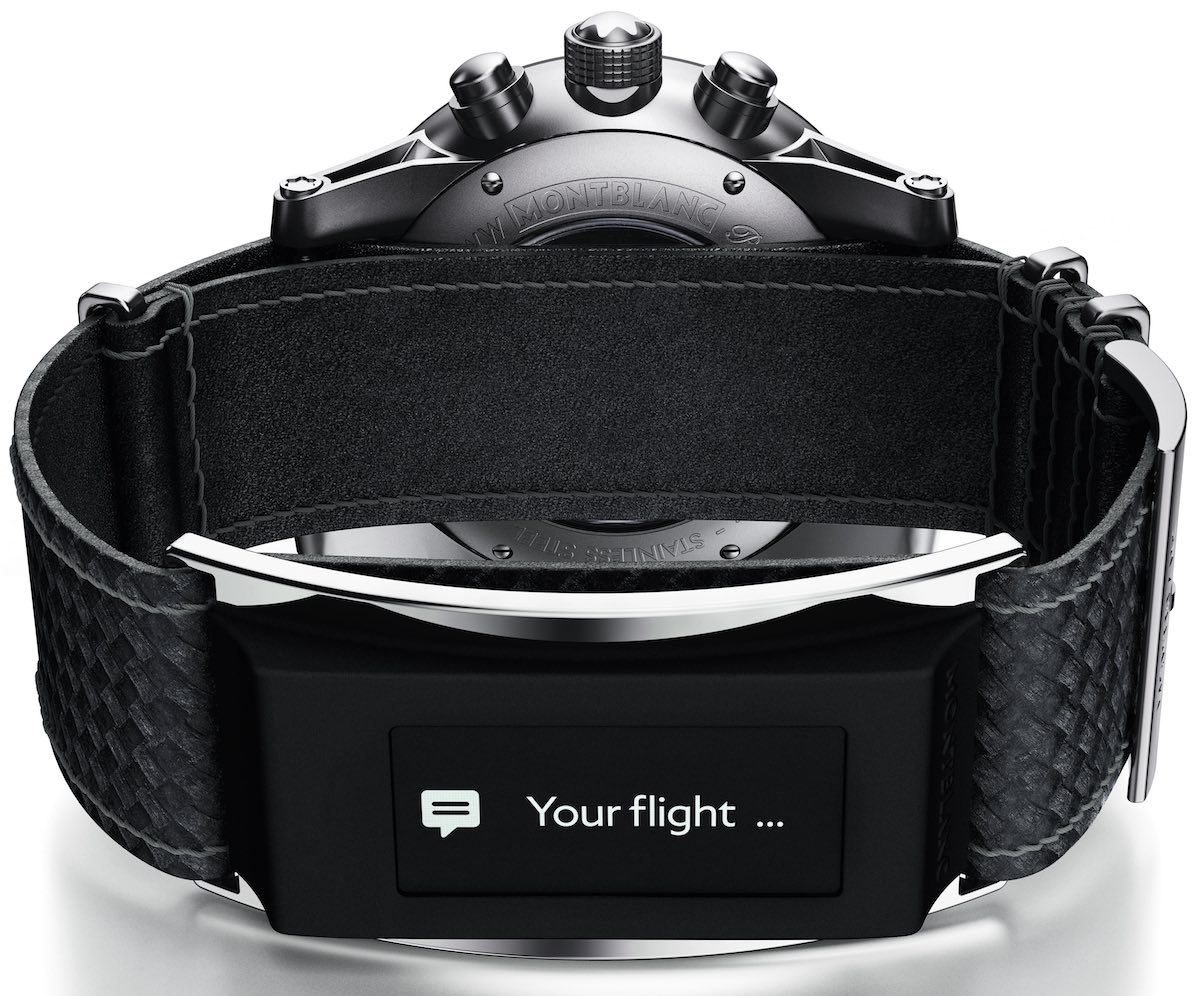 The Montblanc e-Strap from January, 2015.

I feel a strong urge to first ask the question (and then try answer it myself), what it was that has apparently led Montblanc to think the smart strap concept will work this time around. I am no bookkeeper at Montblanc and so perhaps they know something positive about the smart strap market that I don’t, but I remain skeptical at best about the commercial or even conceptual success of it all. That includes their previous smart devices, like this E-Strap smart attachment (hands-on here), or this absolutely massive Montblanc Summit smartwatch that I covered hands-on here.

For the record, a few years ago, during my travels I have indeed seen the E-Strap in some shop windows (windows never outside but always inside the stores, and usually exhibited in a non-prominent location in at least those few airport and city stores where I saw them). I have however never ever once seen one out in the real world. The same holds true to the Summit smartwatch. This isn’t to say none were sold, that would be an unrealistic assumption – but they certainly aren’t exactly ubiquitous, are they? 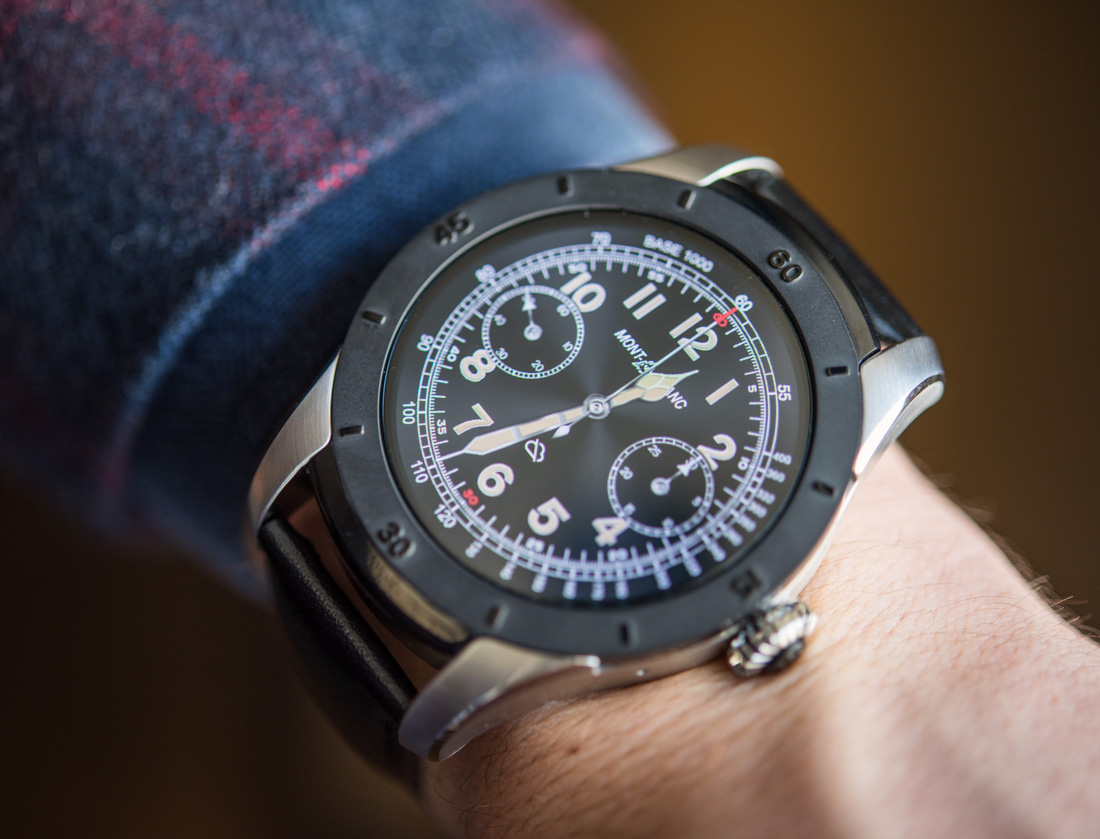 Here’s a quick run-down on what’s new with the Montblanc TWIN Smart Strap. It now has a word in all-caps in its name (I may be totally alone with this pet peeve of mine of disliking all-caps brand or product names) and, more importantly, it “allows classic timepiece lovers to enhance their watch with digital features including notifications, step tracking and a new Montblanc payment solution.”

On a personal note, although I was born at a time when the Berlin wall had been just barely intact, I’m still very much part of a tech-savvy generation, having grown up playing with the Nintendos and Sega games of friends (since we couldn’t afford these at the time, a true first-world tragedy indeed). So I guess I should be more welcoming to the idea of doing something with a device strapped to my wrist as opposed to having to take my phone out of my pocket. I guess that’d be true, if it wasn’t for the fact that at this point of our modern era phones spend more time in our hands than they ever had. According to BusinessInsider’s look at Statista research, “In the US, for example, the average smartphone user spent an hour more on his device last year [2016] than he did four years earlier.” That’s an increase of 40% from about 1.5 hours to 2.5 hours in just 4 years; and I think we can all agree this figure is only going to increase. So, what does the Montblanc TWIN Smart Strap do about this? 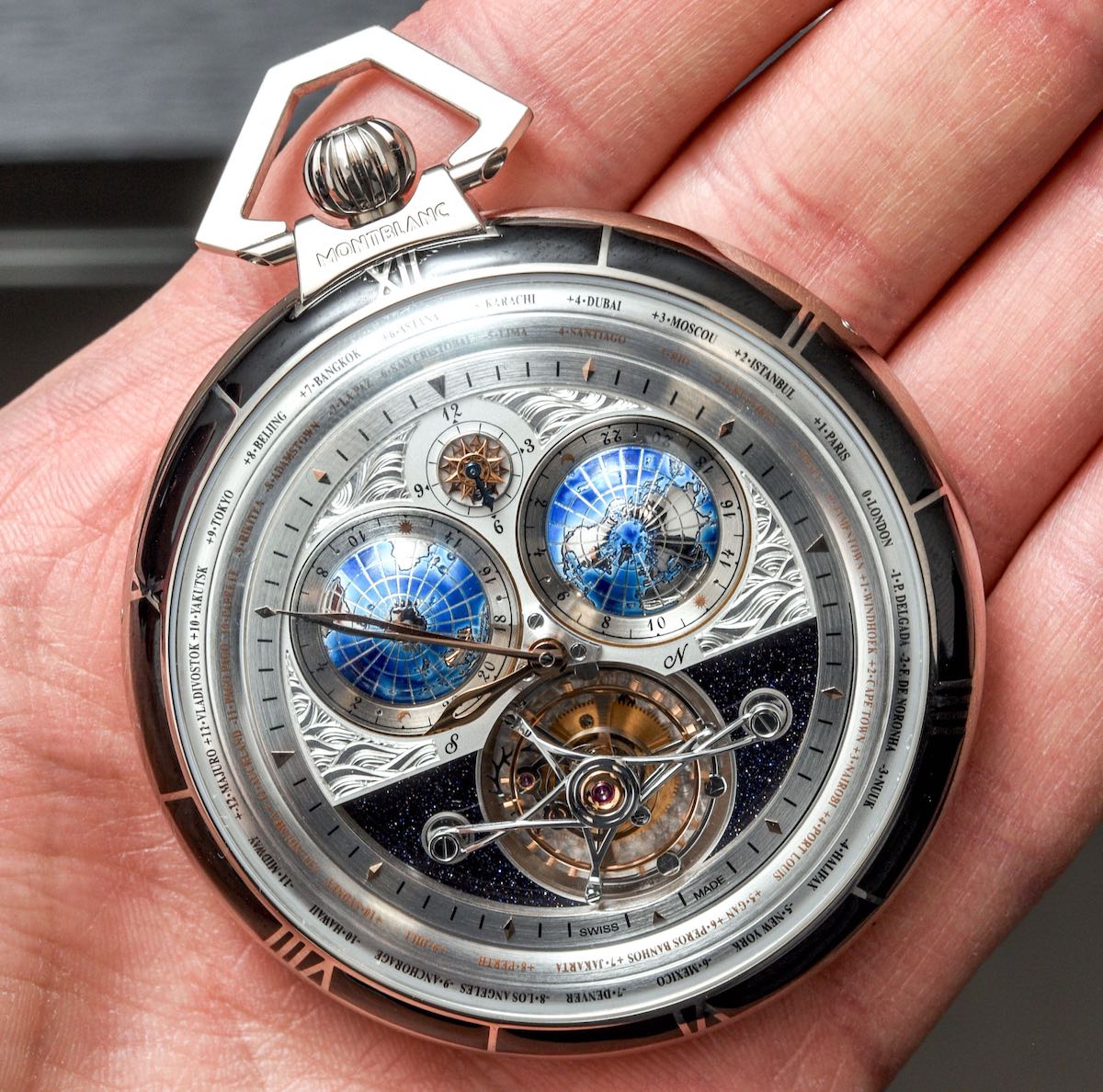 “It further narrows the gap between the analogue and digital watchmaking worlds,” explains Nicolas Baretzki, Montblanc CEO. “The idea of a Smart Strap is rooted in the growing desire for digital functionalities to be added to classic timepieces, which are emotional objects with deep history and meaning to their owners.” I do very much agree with that latter part. He goes on to add “That is why we developed a smart solution that can be attached to most timepieces of any brand. The timepiece remains untouched, while [the] Montblanc TWIN Smart Strap is the innovative companion that elegantly enhances this relationship.”

The Montblanc TWIN Smart Strap consists of two parts: a smart part and a strap part. Hmm. The thin and reportedly light weight smart module is crafted from “watchmaking stainless steel” and is covered by a curved special glass highly resistant to scratches and shocks (but not “watchmaking sapphire crystal”). This bit also acts as a mechanical clasp to fasten the watch, further enhanced by “a sophisticated design that blends in with most timepieces.” Except for round ones, I guess.

Under this glass lies a monochrome OLED display that will allow the wearer to strike a Spiderman pose and read notifications from the underside of his or her wrist. There also is an LED light array to be visually notified on top of vibration alerts. This module has Bluetooth connectivity – though Montblanc apparently isn’t that in tune with the times as the 5-page press release makes no mention of the type of Bluetooth connectivity, something that has seen many important updates recently that affect efficiency and energy consumption. Unfortunately, this won’t have to bother Android users at all, as the TWIN Smart Strap brings another dose of tech-déjà vu by being iOS-only compatible. Android, unlike most smart wearables, has come a long way both in refinement and market share.

The strap Montblanc refers to as “high quality and comfortable,” coming in two versions at 20mm and 22mm, two of the most popular lug widths for men’s watches. The strap itself is made from high-quality rubber composite with structural blocks designed to allow guided and easy adjustment. The upper part of the strap comes in four different versions, these are black or brown calf leather, black or black and grey nylon.

With the Montblanc TWIN Smart Strap the brand also introduces a new mobile payment platform called Montblanc Pay. It brings contactless payment to its owner’s wrist, allowing for easy payment at compatible terminals in stores, restaurants or wherever. This means that “mechanical timepieces can act as digital wallets for the first time” – and though I am generally open to novel ideas in watchmaking, I wonder how many will actually want to pay with their mechanical watches (or rather their clasps). 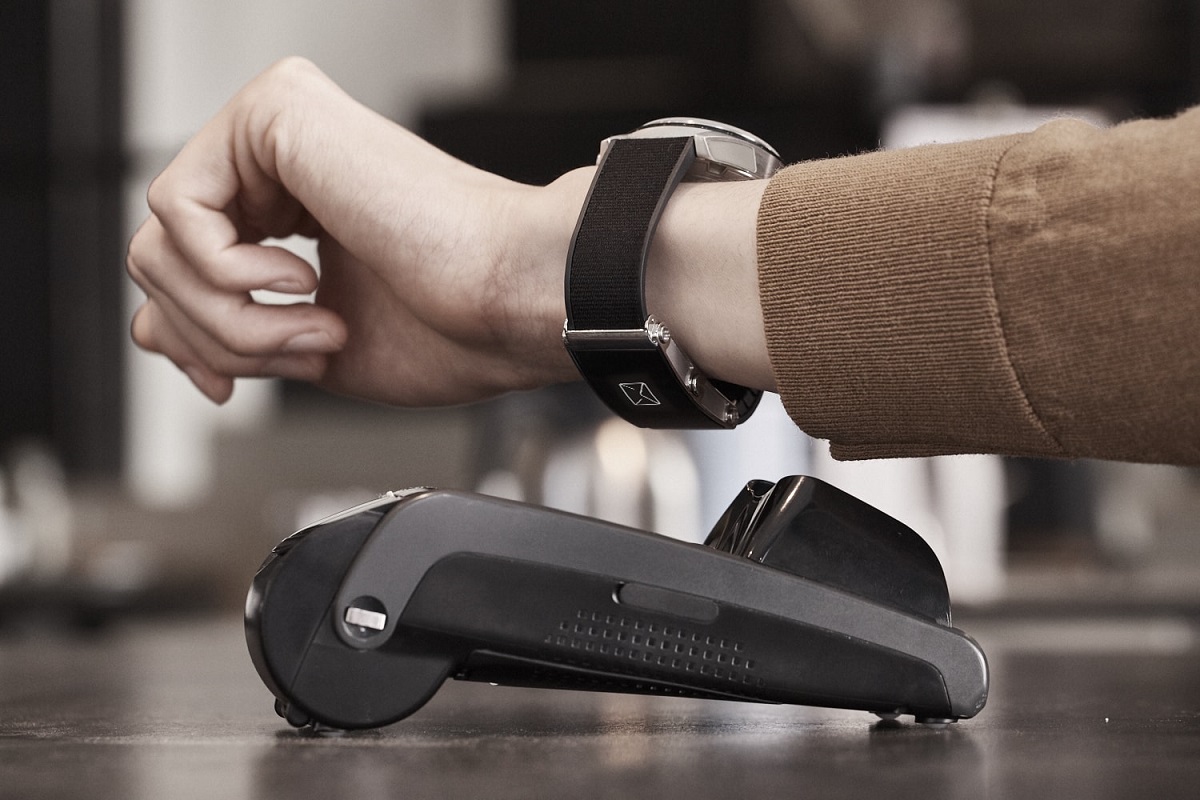 Montblanc says they worked in full partnership with Visa and Mastercard to ensure the highest security standards, meaning that the payment function will deactivate in case of theft or loss and state-of-the-art data encryption will keep your credit card and other personal data secure from hacking.

Last, and (not?) least, you also get “daily rings” that are “a digital diary [which,] when zoomed into, give the user visual feedback and insights that can be used to take back control of his or her time.” I presume this is a more romantic interpretation of how much time you’ve spent with different activities – but your guess is as good as mine. Furthermore: “’Memories’ is a new feature that automatically synchronizes with the user’s iPhone, copying and showing all the calendar events in the app. For the period of time during a calendar event, the algorithm automatically copies any picture or video taken from the phone into the respective calendar event. This allows the user to easily access his visual memories by simply looking back into calendar events in the Montblanc TWIN app, creating a deeper emotional bond with the timepiece through this advanced function.” I tried to understand what this meant but I failed miserably. Maybe that’s because I’m no iOS user, something I’ll take the blame for. This is so niche and detached from the smart strap functionality that I am not sure about how practical a feature it actually is. 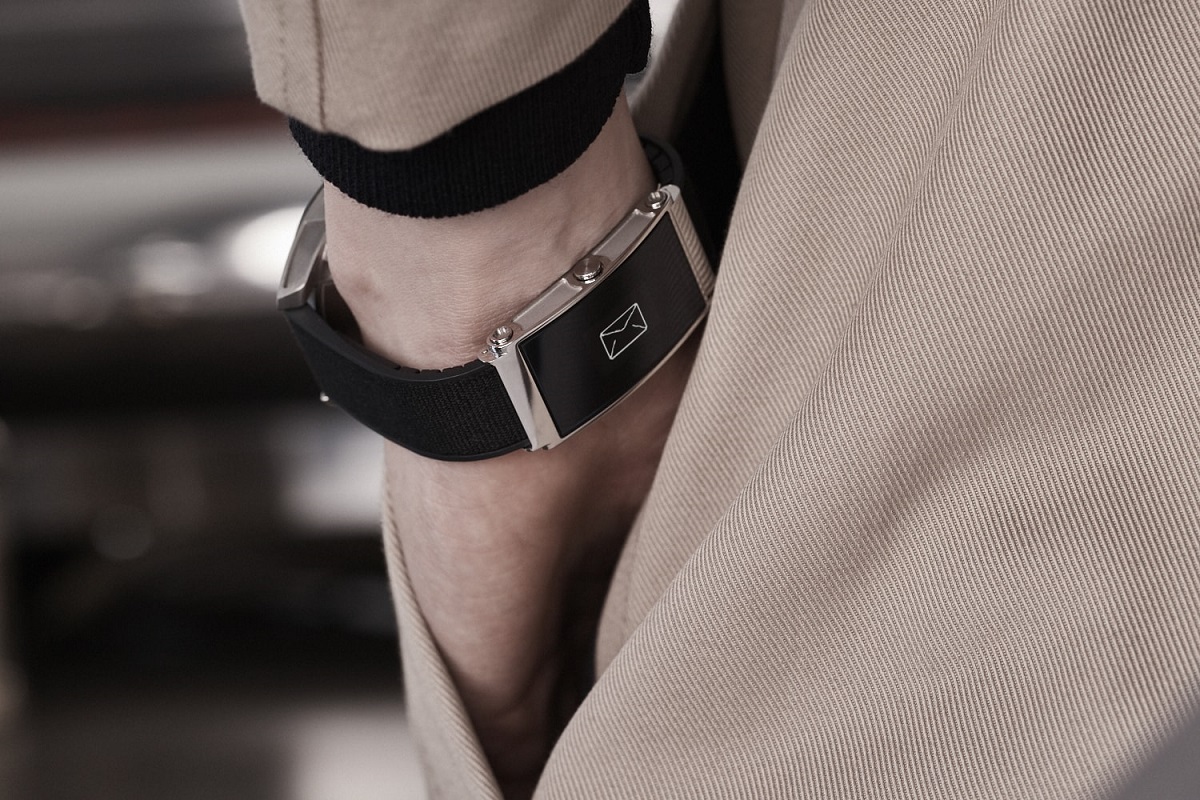 I think that goes for the entire concept too, meaning that although I am ready to admit I wasn’t as welcoming of this concept as some might have expected, I still give it the benefit of doubt by saying the Montblanc TWIN Smart Strap just might be able to make a case for itself (see what I did there?) in real life practice. I hope we get to check one of these out in a review sometime – I’ll leave that to Ariel though, as he is more inclined to fiddle with this sort of stuff… plus, come to think of it, he has an iPhone and I use Android, so I’m out of the running for this one anyway.

The module itself measures 47 by 26 millimeters and is 6mm at its thickest point, is IP68 splash and rain resistant and has a claimed battery life of up to a week on one charge. Price for the Montblanc TWIN Smart Strap is $450 and it will be available from August, 2018. montblanc.com