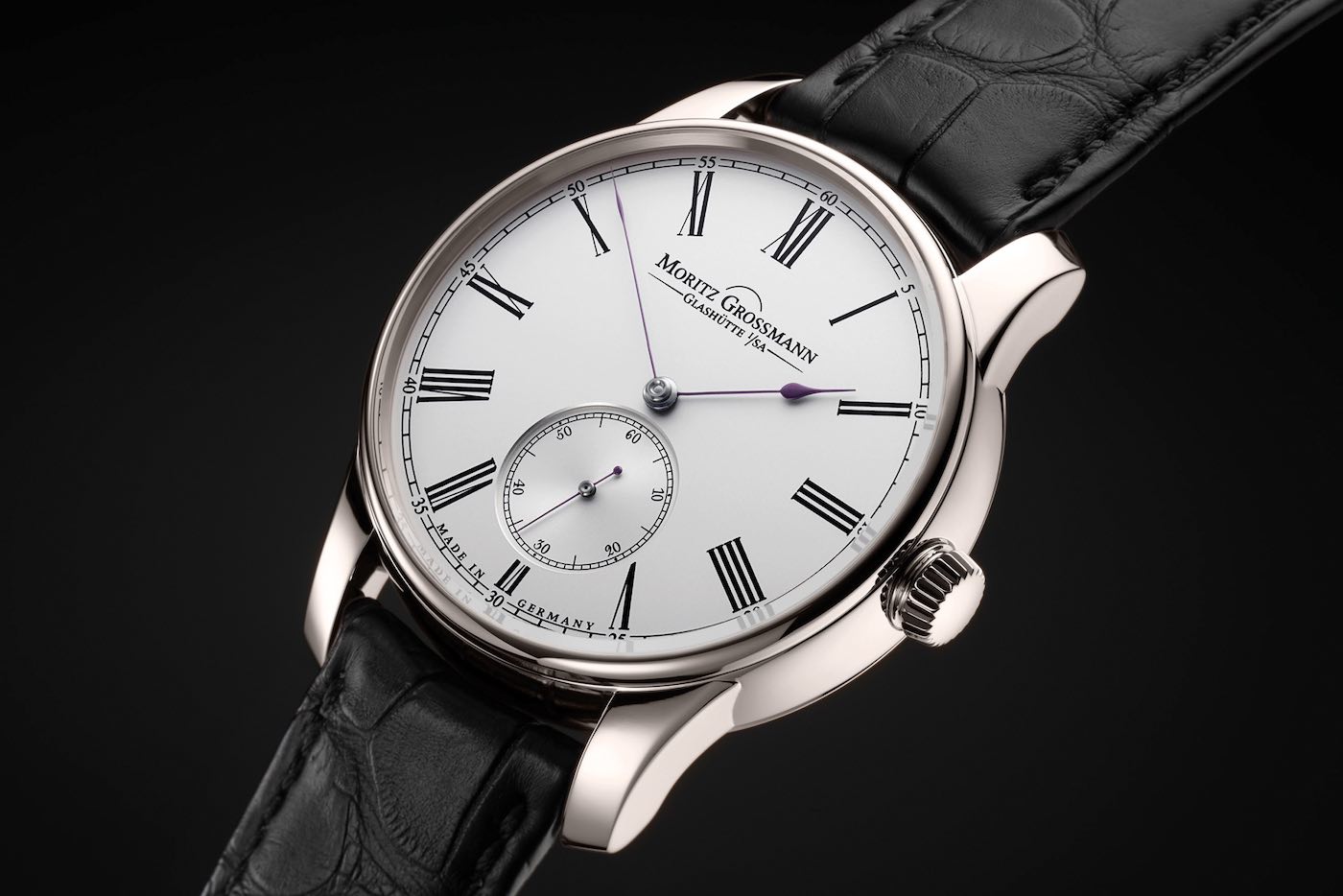 German watchmaker Moritz Grossmann has released a dress watch that uses some seriously interesting mechanics. The Moritz Grossmann Hamatic is a follow-up to last year’s Atum Hamatic release that marked the first time Moritz Grossmann had released an automatic watch. The Atum Hamatic was very similar but featured an open-dial, which displayed the novel winding system. The watch features a a self-winding “hammer system” in-lieu of a traditional rotor which presented its own unique set of challenges. Measuring in at 41mm x 11.35mm, the watch is on the slightly larger side for a traditional dress watch. The case is available in either white gold (ref. MG-002303) or red gold (ref. MG-002302) with extended lugs. The dial is a slab of silver and utilizes conservative design cues based on pocket watches of old. Traditional roman numeral indicators, and a recessed small second sub dial are the only indications.

The handset is my favorite part of the dial. Featuring an ultra-thin (1/10th of a millimeter at their thinnest points) handset, the hour-hand features a pear-shaped head, while the minute hand utilizes a spear shape. Both are heat-treated to achieve that “brown-violet” color distinctive to Moritz Grossmann. Overall, the dial feels like a streamlined pocket watch, and I’m totally in favor of it. The watch is water resistant up to 30m, and comes on either a black or brown alligator leather strap. Flipping the watch over is where the real fun begins. Visible through a sapphire caseback is the Moritz Grossmann Calibre 106.1. This movement is specifically designed for the Hamatic. Being the first automatic movement the brand has produced (they’re known for their hand wound movements), the construction of the movement is unique in that it draws influence from some of the oldest automatics. The first thing you’ll notice is the huge oval shaped hammer. The general concept here is that the hammer, which spans just about the entire width of the movement, can be torqued by even the slightest movements. Because the weight at the end of the hammer is solid gold, and far from it’s base, it swings back and forth like a pendulum. Differential gearing means the movement of the hammer can wind the spring no matter which direction it swings. Now, because of the nature of an automatic hammer winding system’s design in general, shock and dramatic movements can throw off the wind. So, Moritz Grossmann added two buffers to the end of the oscillator to accommodate those high excursion shocks to the weight. Getting those tensions correct was one of the things that delayed the initial release of the Hamatic movement. Now, this will probably make your eyes glaze over, but here’s how they’ve managed to wind a mainspring from a pendulum. The brand has developed a module called a “yoke winder” to convert the energy generated by the hammer into a continuous wind. Each swing of the hammer clicks one of the two-way directional click levers. Those levers capture the energy from each swing via a reduction wheel that transfers all of it to a free wheel. The free wheel then drives the barrel ratchet, and winds the mainspring. And, as an added bonus, hidden under the beautifully decorated bridge, is a manual winding system. The yoke winder will disengage the manual winding module when the hammer is in motion, and reengage once the crown is popped out. A pretty cool feature.

Decoration is, of course, top notch. The bridge features six Geneva stripes, while the hammer itself is vertically brushed with beveled edges. The wheels feature a similar circular grain while the small bridges are sandblasted to give them contrast. The polished balance wheel and bridge have nice aesthetic, and the brown-violet heat treated screws are fun and practical addition (with heat treating being performed to protect components from future, unwanted oxidization). The movement features a power reserve of 72 hours. I like this watch way more than I would have expected to from the press release. The unique movement is an engineering feat worthy of attention. The hammer winding system is quaintly obsolete in comparison to the more efficient modern rotor winding system. But it offers a wonderful point of difference and is a great conversation starter. The Hamatic movement took quite some time to perfect, but I find it admirable that the brand took the time to get it right, instead of rushing out a model that wasn’t ready. The price for the Moritz Grossmann Hamatic is €37,600. You can read more about this watch at en.grossmann-uhren.com.