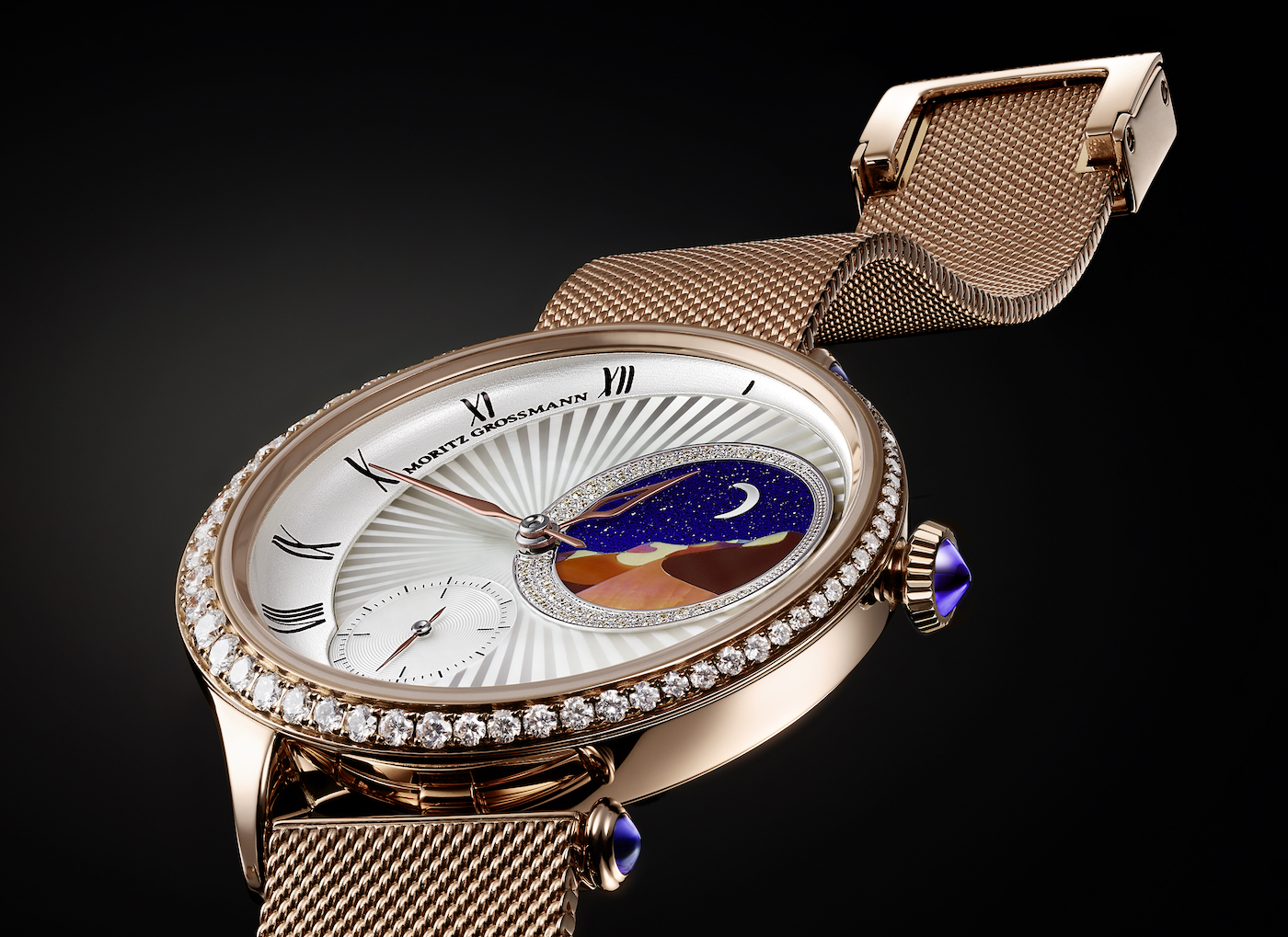 Right off the bat, the Moritz Grossman TEFNUT 1001 Nights watch ground my gears. There is so much happening in such a relatively small space my brain couldn’t handle it. Pretty much every bling box was checked. Diamonds? Check. Mother-of-pearl? Check. Bejewelled crown? Of course. I had to walk away from it for a few minutes and have a strong cup of tea before returning to the fray to break down each of the elements that had conspired to shred my nerves.

Annoyingly, on further inspection, I decided that I actually liked a lot of the choices made here, in isolation. I still can’t get on board with the end result, wholeheartedly, but I can certainly understand why someone else would like it. And let’s not forget, despite my rumored proclivity for velvet smoking jackets and platform boots, I’m hardly the target audience for a watch like this. Academic appreciation is probably the best Moritz Grossman could hope for from a tool-watch-toting woodsman, after all.

The Moritz Grossman TEFNUT 1001 Nights watch is, I believe, surprisingly well designed. It is clear that the designer set out to create something consciously disruptive. Doing away with the right-hand lugs was a good place to start. While the end result scares me somewhat for its apparent flimsiness, the deeply satisfying arrangement of the two bejewelled bracelet-caps, for want of a better term, in relation to the matching crown is the kind of idea that would have sent me giddy had it been mine. 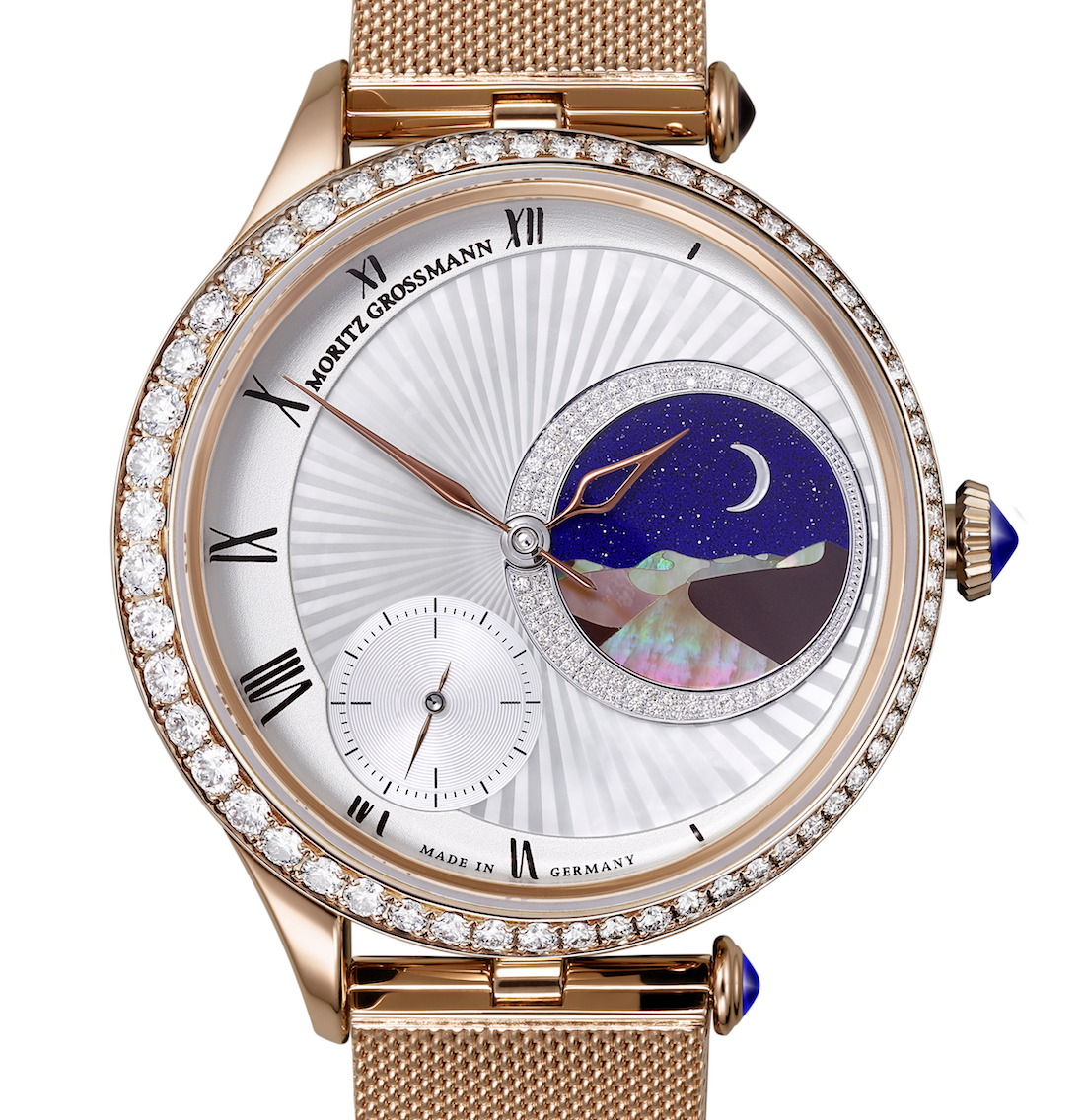 In fact, I have had this idea. I, along with countless others, I’m sure, conceived an idea just like this about five years ago. For months I was convinced it was the greatest idea since sliced bread. Then I changed my mind.

When I see this idea realized, I “like it” in theory. But the reason I abandoned it, myself, still persists. It comes across as contrived, too deliberate, too desirous of attention. That’s not to say it’s not cool. It’s just not to my liking.

The case, case decoration, and dial should be analyzed as a whole. The whole case has a sense of weight on its left-hand side, thanks to the missing lugs. This is despite the fact the case is round (37mm). The effect is doubly accentuated by the fact the bezel narrows toward the crown, as do the diamond settings. All of this imbalance is mirrored in the dial, with the present moon a repeated motif in the asymmetrical lug system, the bezel thickness, the chapter ring around the edge of the dial, and finally, is reversed in the night sky depicted by the mother-of-pearl scene at 3 o’clock.

The going seconds sub-dial seems, at first glance, to be floating in no-man’s land, but it is, in fact, a wonderful counterweight to the strained balance of a complex, and lavish timepiece. 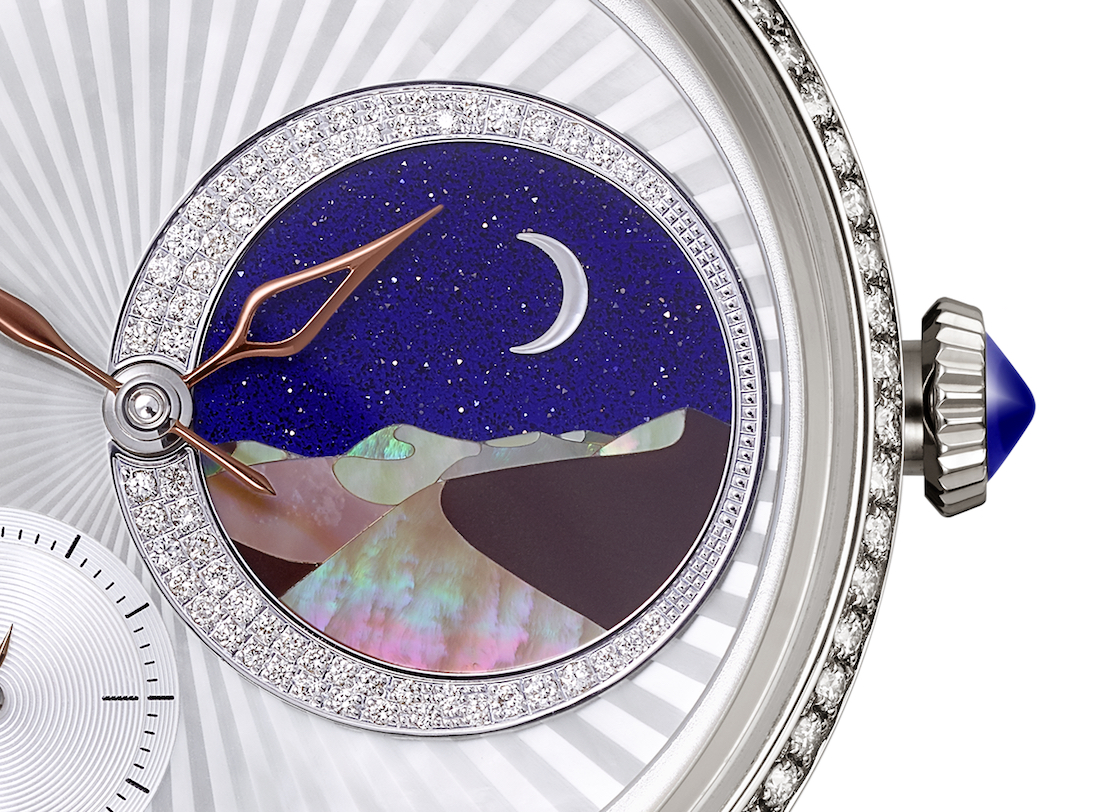 Powered by a beautifully finished in-house movement, the Moritz Grossman TEFNUT 1001 Nights watch packs a powerful punch. Caliber 102.0 has 196 parts, employs the 3/5-plate style, beats at a languid 21,600vph, and offers a power reserve of 48 hours. The movement is adjusted in five positions and timekeeping is regulated by the Grossman balance wheel, featuring four inertia screws and two poising screws. Simply put, it’s a serious piece of kit, outside and in. 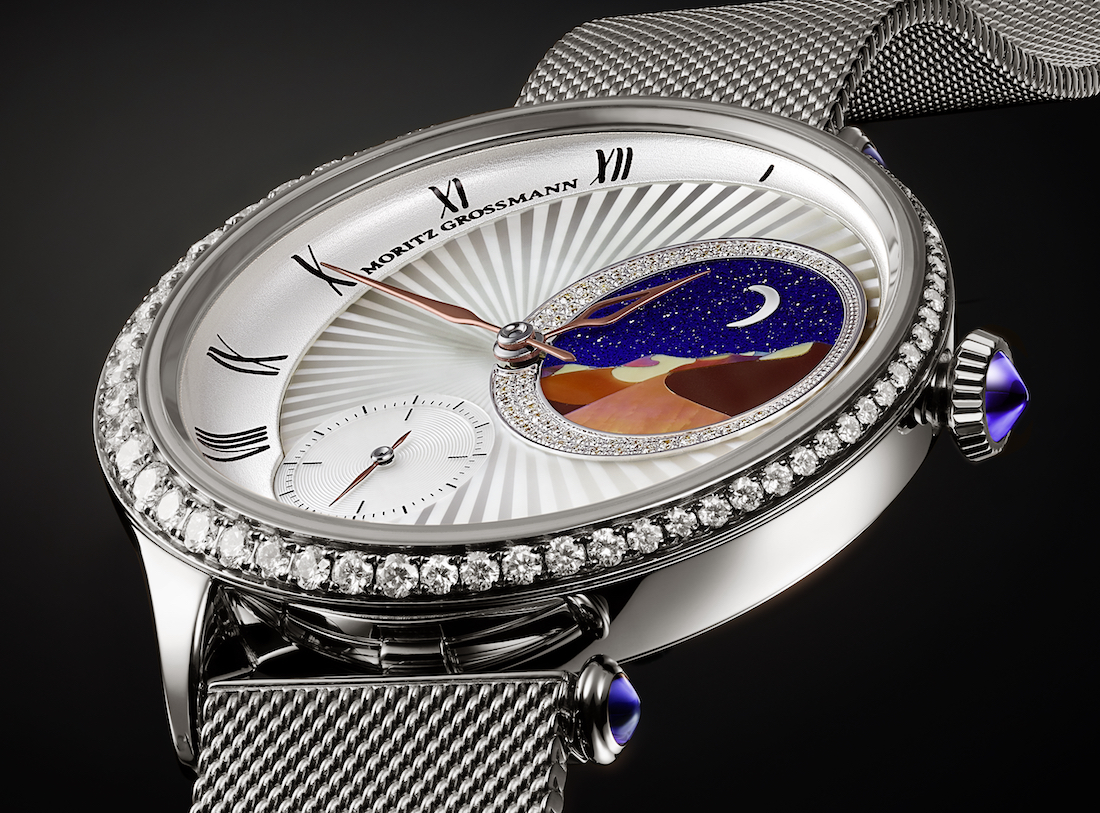 There are two versions of this watch available, one in 750 rose gold, the other in 750 white gold. Both carry the same price tag of $44,400. The watches will be part of Moritz Grossman’s International Roadshow, which commenced on January 30th. The tour is currently taking place in Dubai, from where it will move to Tokyo and Hong Kong before finally reaching London at the beginning of March. Check for tour updates at grossman-uhren.com, should you wish to pop along and see this intriguing piece in person.