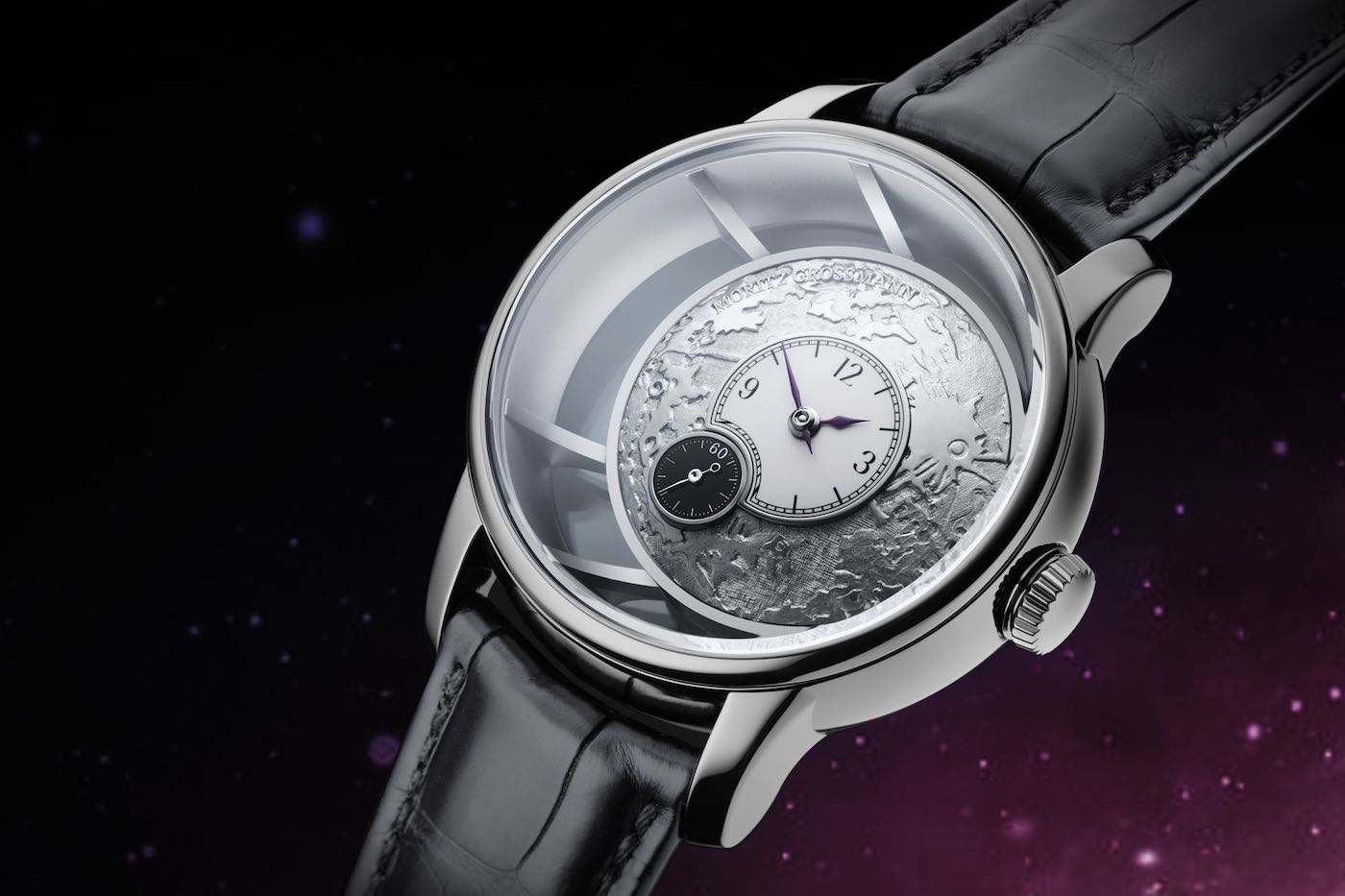 While it’s perfectly understandable if you’ve had quite enough of “moon-landing-inspired” timepieces, I’m afraid the rush of commemorative editions is still rushing. One slightly odd thing about this current, quite logical (however, occasionally jarring) trend, is that many brands (Moritz Grossmann included) have taken this opportunity to create watches based only very loosely on the moon landing itself. Instead, these brands have chosen to draw inspiration from the practically infinite well of Space. In the case of the Moritz Grossmann Moon in Space watch, the direct inspiration is the mission of humans’ first satellite in Space — Sputnik I. Oh, and the fact that the moon is in Space. Just in case that escaped you. Just to clarify: The moon (big rock in the sky at night) is in Space. 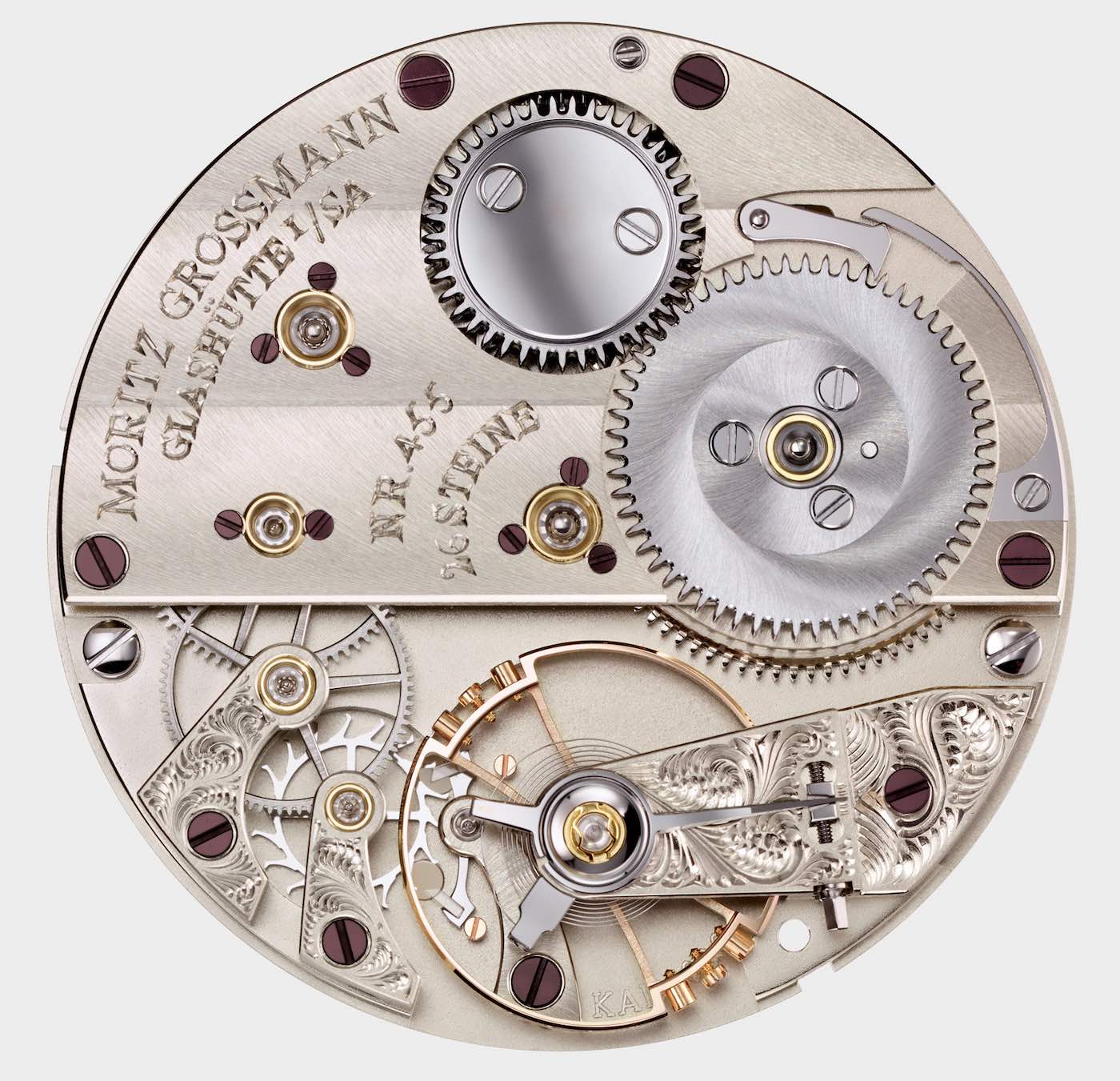 The Moritz Grossmann Moon in Space has just returned to Germany after traveling the globe on an expository roadshow, entertaining onlookers with the fine detailing of its lunar visage. The most immediately noticeable thing about this watch is the massive, display-dominating moon. Made from silver and hand-crafted with relief engraving, the moon is set with two small, time-telling dials. 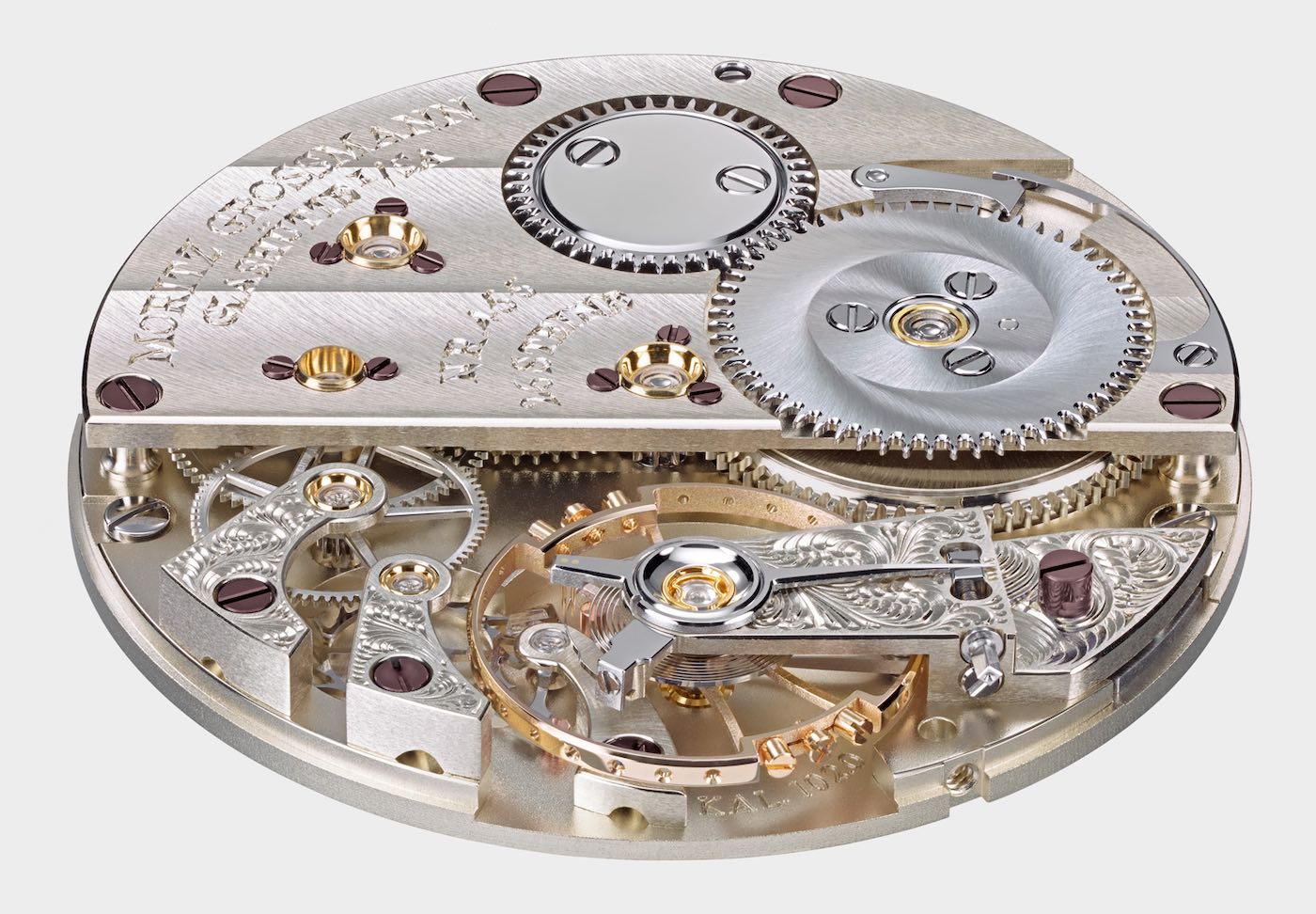 Both of these dials are coated with grand feu enamel. The white dial (in the dead-center of the moon) shows the hours and minutes by way of Moritz Grossmann’s signature purpled hands (which are truly gorgeous, and always, no matter the watch, draw me in and cause my heart to momentarily flutter). Encroaching on the hours and minutes dial around the 7 o’clock point is a sub-seconds dial in black grand feu enamel with white printing. The lollipop counterpoise on another elegant hand is a stylish touch and ensures that neither active element of this watch sells itself short. How these two exquisite micro-dials mesh with the overall aesthetic of the piece, however, is more debatable. 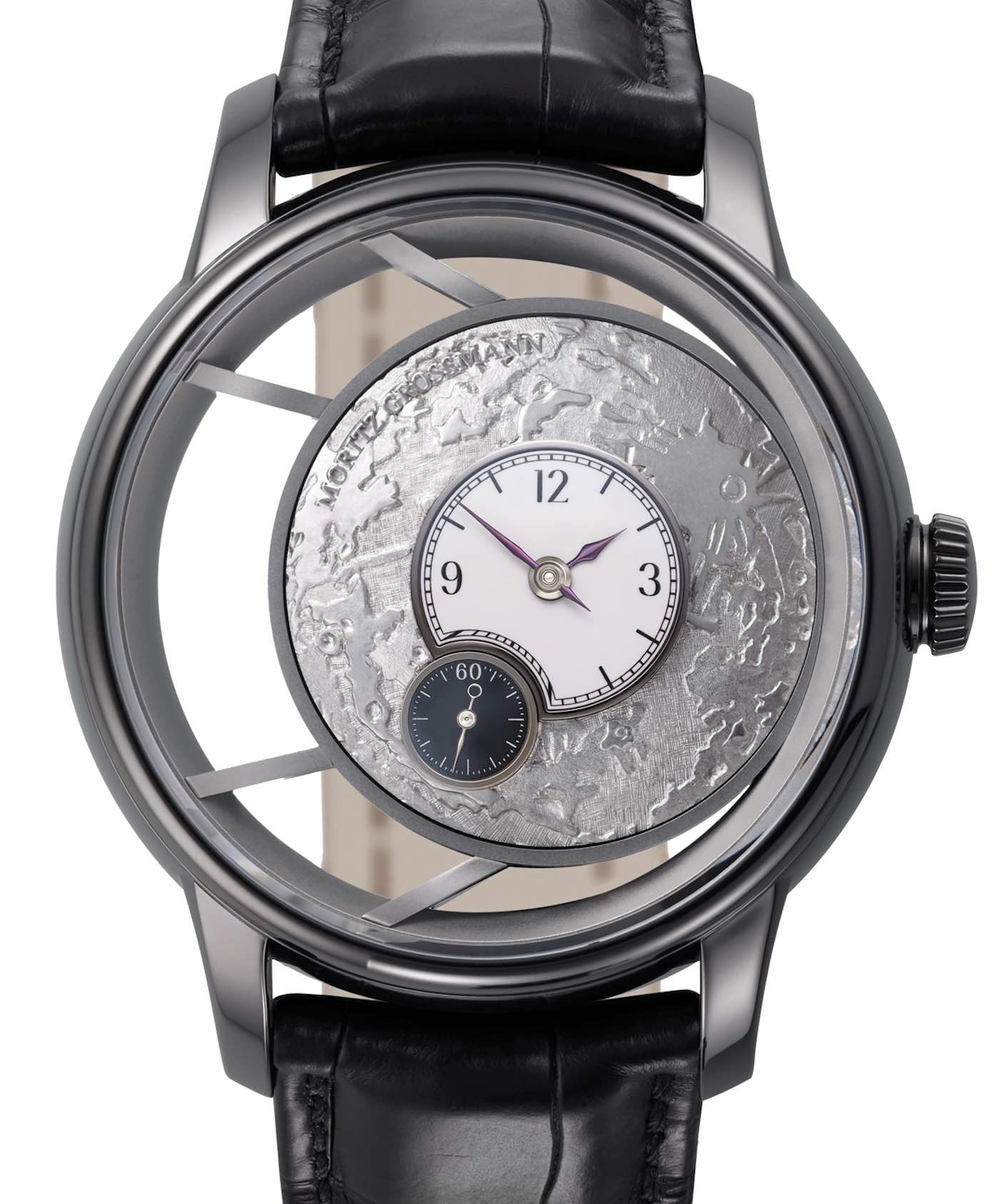 This is, like many of Moritz Grossmann’s limited pieces, not going to be everyone’s cup of tea. The four tendrillar (gold) bars that extend from the moon on the righthand side of the display, giving the impression of a comet hurtling across your wrist from elbow to hand, reference the four antennae of Sputnik I. The off-center location of the moon is made possible by caliber 102.0’s diminutive diameter (26mm) in comparison to the striking 44.5mm case. Although it may not be immediately obvious from the lead image in this article, the stainless steel case is coated with DLC and is, thus, a deep black color. It appears a little more gray in press shots due to the very high polish applied to the entirety of the case. 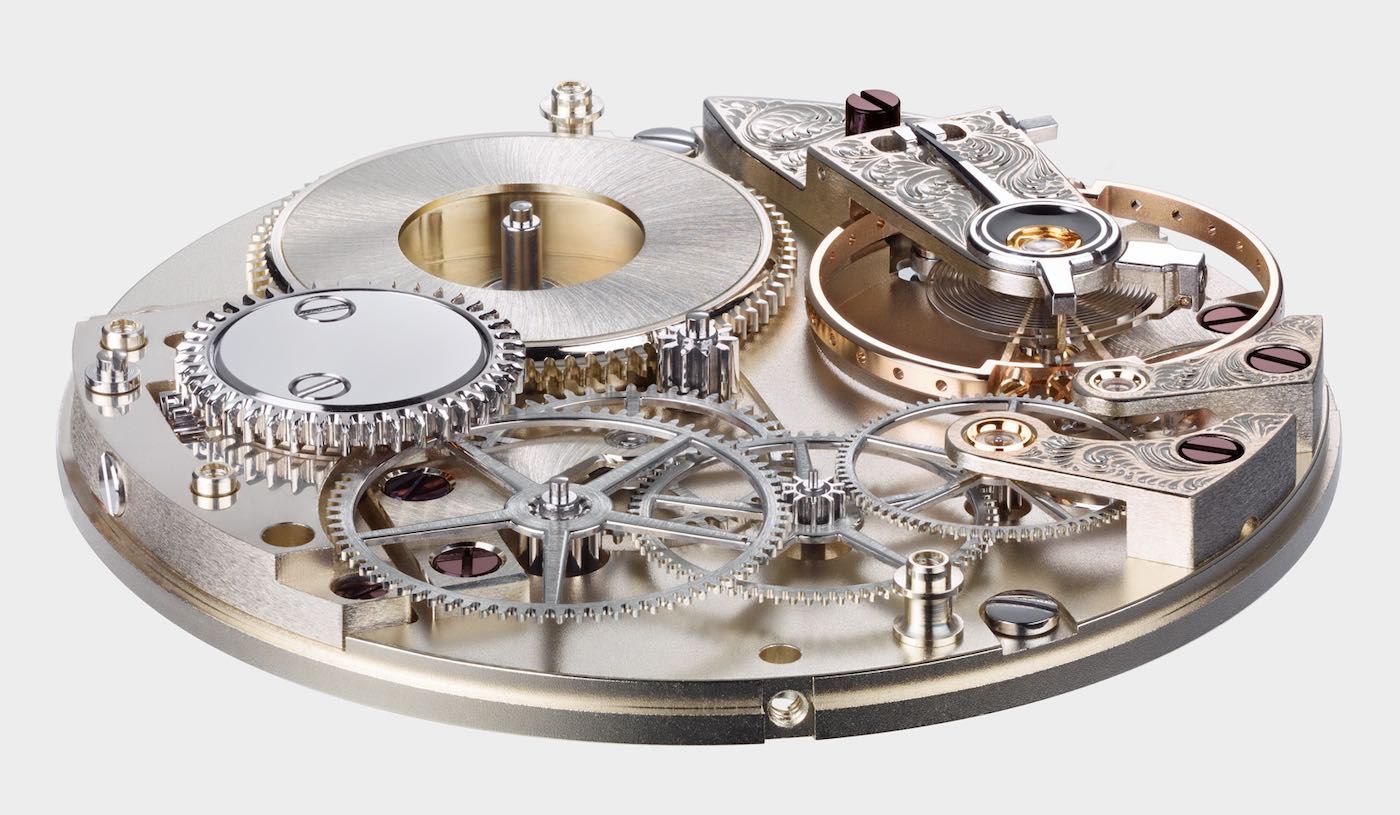 Using a small movement in a large case tends to be nothing more than laziness. Here the practice has been used to dramatic effect. Whether it resonates with enough people to shift all eight of the models being made in this extremely limited run remains to be seen, but with such an eye-catching piece it seems likely that the concept will find its following. 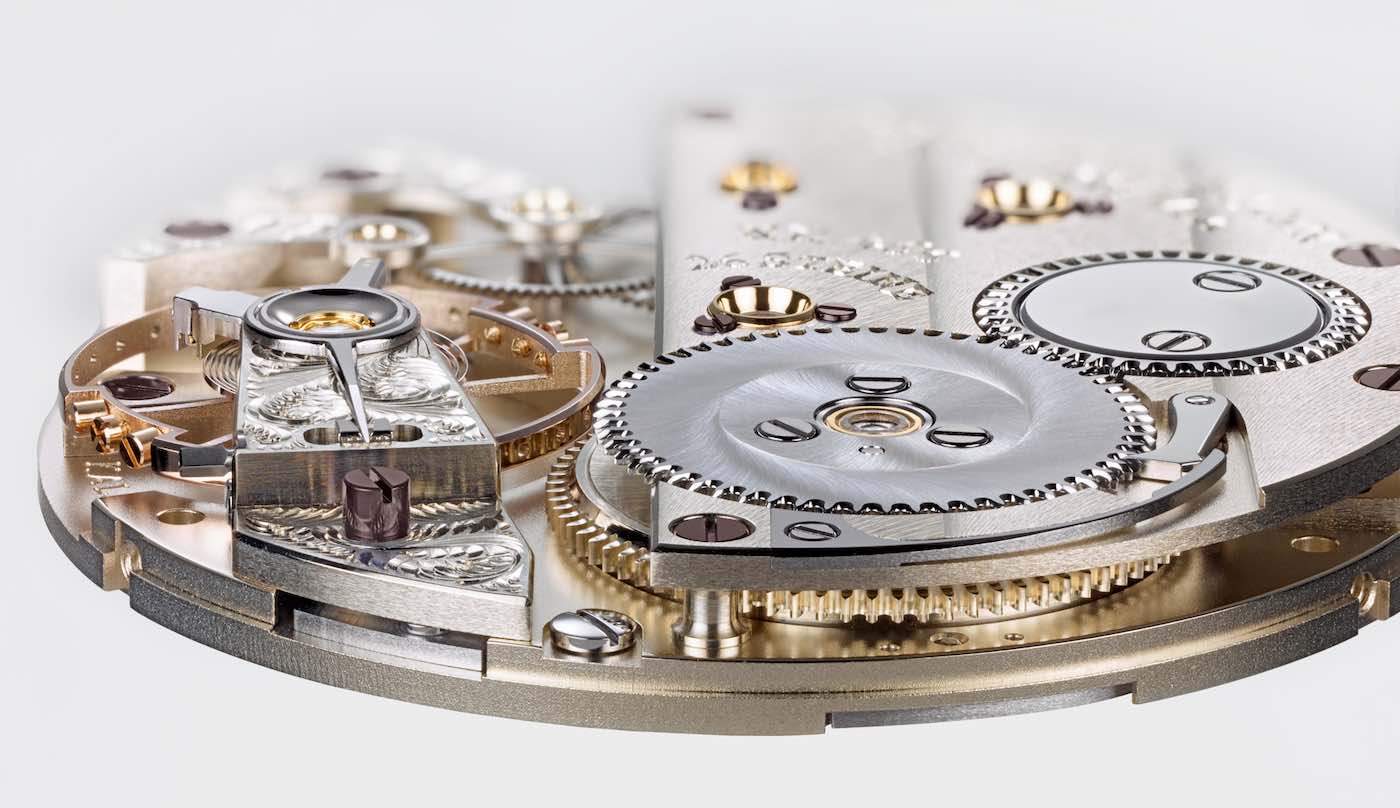 While the overall aesthetic is controversial, the movement, its traditional German architecture, and its incredible level of finishing should find near-universal appreciation. Although a very petite caliber for a brand more known for its solid, pocket-watch-inspired mechanics, the 102.0 uses the typical 3/5 plate structure for which the brand is known. A stepped balance cock with the Grossmann micrometer screw, the separately removable winding block, and the mass-optimized balance are all present and can be observed (and obligatorily fawned over) through the sapphire crystal display back. And while it may be small, the 21,600vph caliber is packing a remarkably decent 48-hour power reserve. To reduce isochronous errors as the power runs down, Moritz Grossmann has jeweled the barrel (top and bottom bearing points) to optimize power transfer during low torque times. The Moritz Grossmann Moon in Space is limited to eight pieces and is priced at €30,700. Learn more at grossman-uhren.com.