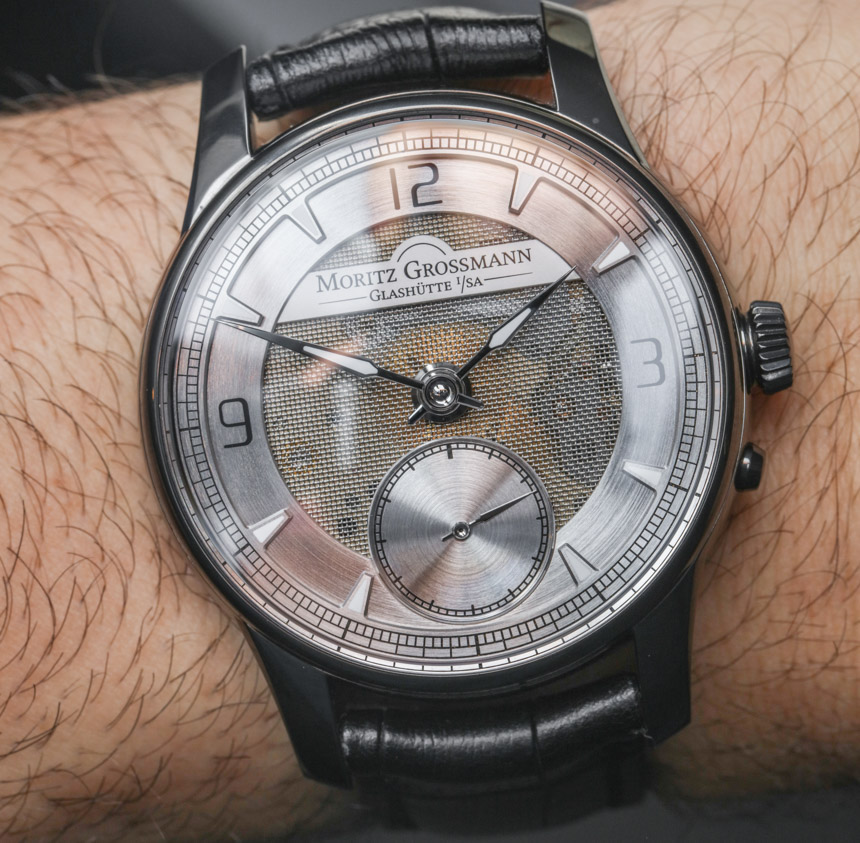 Moritz Grossmann offers two case styles for the Moritz Grossmann Atum Pure M, in normal steel as well as gray-colored DLC-coated steel. The latter is probably my favorite given its gunmetal look that adds to the interesting industrial aesthetic I am drawn to here. The case is 41mm wide and 11.35mm thick. That means it wears comfortably and visibly without being either too large or too small for most wrist sizes. Note the extra pusher on the case in addition to the crown. Speaking of which, I really like the design of the crowns on Moritz Grossmann’s cases. The extra pusher is used to start the time again. Basically, the crown operates differently here than on most watches. When you pull it out, it stops the watch and allows you to set the time, but it is also pulled back into place via a spring. That prevents the crown from being out and allowing particles or water into the case. In order to get the watch to start again, you press the little pusher. This also makes it more simple to set the time if you are synchronizing it to the precise second with a reference clock. These extra features add personality to Moritz Grossmann watches, and despite their relative lack of serious utility for many owners, they go a long way to adding a stronger emotional connection with the products for those people like me who appreciate mechanical functionality and performance. The movement operates at 2.5Hz (18,000bph) with a power reserve of 42 hours. That isn’t exactly purely modern, but this is a “traditional style” watch movement. I actually believe it is still rather accurate. Note that the unfinished German silver alloy used for the bridges will patina over time for an interesting look. I’m happy to be perfectly honest in saying that when I first saw the Moritz Grossmann Atum Pure M in press pictures when it was debuted earlier in 2016 I wasn’t super excited about it. Though, after seeing it hands-on and wearing it, I have come to really appreciate its design which combines contemporary appeal with the comfort of a traditional timepiece. It isn’t perfect, but it is a theme I really advise the brand to keep exploring – if only to help them further differentiate themselves from the other brands also making traditional-style German watches in Glashütte. This particular version of the Moritz Grossmann Atum Pure M is the reference MG02.I-06-A000587, but there are a total of eight versions. The DLC-coated cases cost a bit more, and each of the versions will be produced as part of a limited edition of 50 pieces. Price for the Moritz Grossmann Atum Purm M in natural steel is 12,900 euros and with the DLC-coated steel case the price is 13,500 euros. grossmann-uhren.com