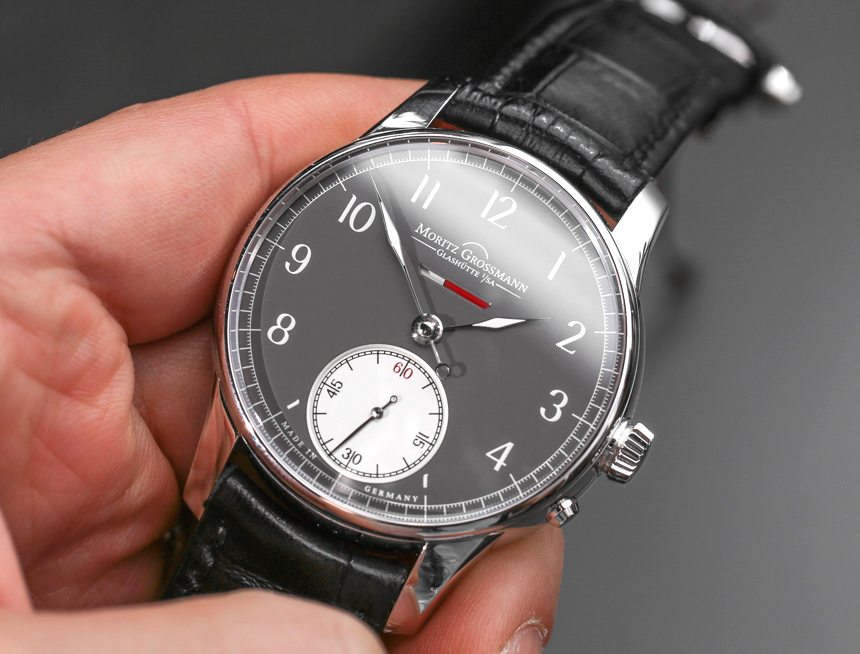 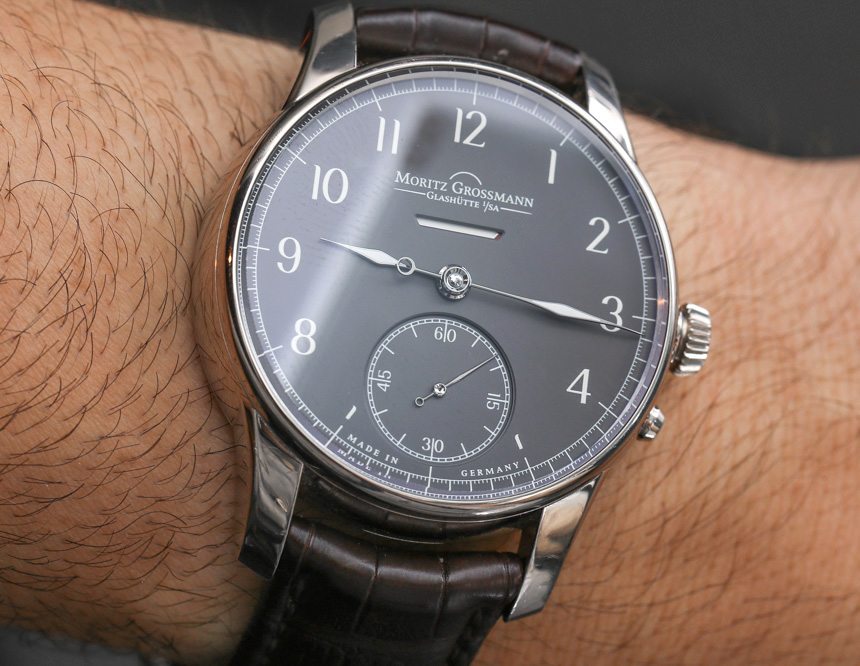 Before I get into the Moritz Grossmann Benu Power Reserve, I want to briefly discuss the town it hails from. Glashütte, Germany, in most respects is a charming place to visit even if you aren’t in the watch industry or interested in timepieces. If you are a watch lover, however, then you’ll find this mecca for mechanical German-made watches to be particularly appealing for not only is clean, attractive streets, but also for its wealth of wonderful watch makers ranging from Nomos at the lower end, topped with A. Lange & Söhne at arguably the very top. With that said, there are a lot of brands which are seeking to fill in everything in the middle with fittingly German designs and a focus of what has kept mechanical timekeeping so popular even after we no longer need it. 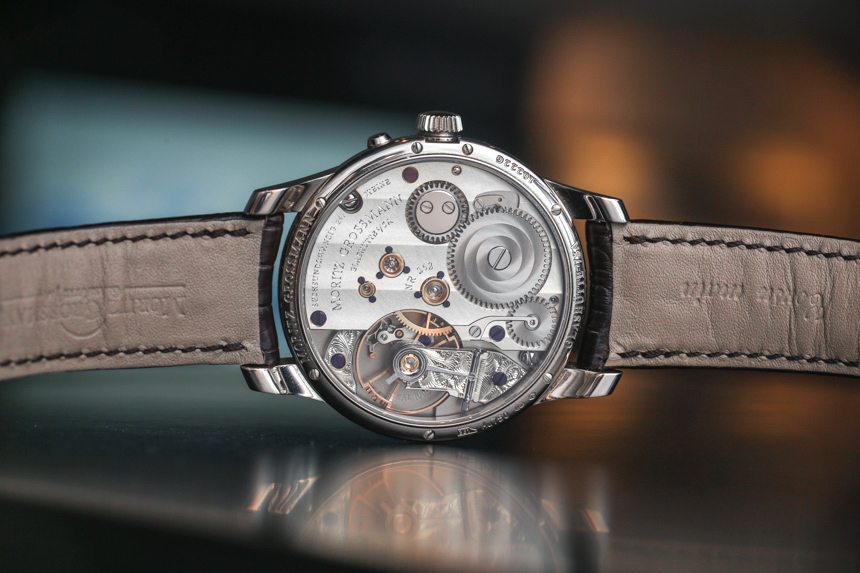 Moritz Grossmann in Glashütte is certainly closer to A. Lange & Söhne in terms of what they do, their prices, as well as their style. What most people need to understand is that even though A. Lange & Söhne historically brought watch making to the town, the region developed its own watch making style complete with production techniques as well as aesthetic styles.

For this reason, you see a degree of overlap when it comes to various features that many of the watches from these different brands have. A good example is the engraved balance cock which you’ll see in watches produced by A. Lange & Sohne, but also other watchmakers in Glashütte including Moritz Grossmann.

Right now, I’d like to look at what is probably the most popular watch (or it should be) from Moritz Grossmann, and it is their Benu Power Reserve – available in four versions with cases in either 18k rose gold, white gold, or platinum. The two Moritz Grossmann Benu Power Reserve watches featured in this hands-on article are one of the 18k white gold models as well as the platinum model. The latter can be more easily distinguished by its white colored subsidiary seconds dial, while that of the white gold model is a matching color to the rest of the otherwise gray dial. 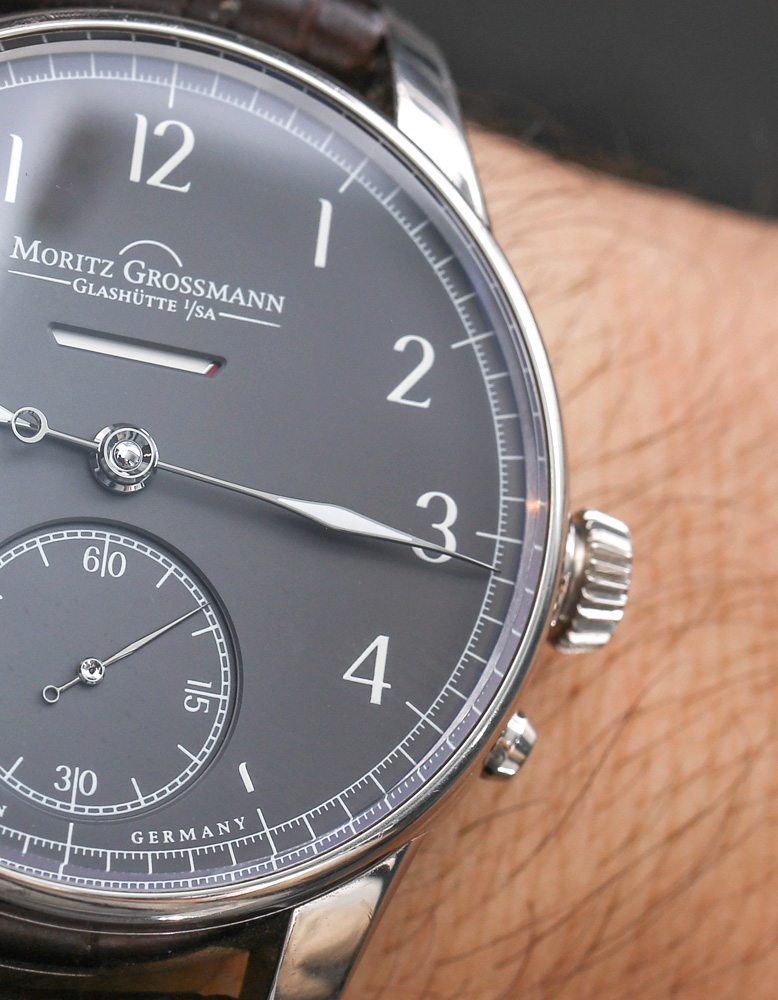 The typical Glashütte-style wrist watch is very traditional in its design with each of the companies that offer timepieces like this adding their own little twist but nevertheless conforming to the super legible design of having Arabic numeral hour markers, properly sized hands, and often a subsidiary seconds dial. It’s a simplicity that becomes beautiful once you appreciate how functional the dials are.

At A. Lange & Söhne, this style is best represented by their 1815 watch, and at Moritz Grossmann it is their Benu. While they offer a strict time-only model of the Benu, I suggest looking at the Moritz Grossmann Benu Power Reserve to get the most interesting model from the brand that adds a degree of welcome functionality. 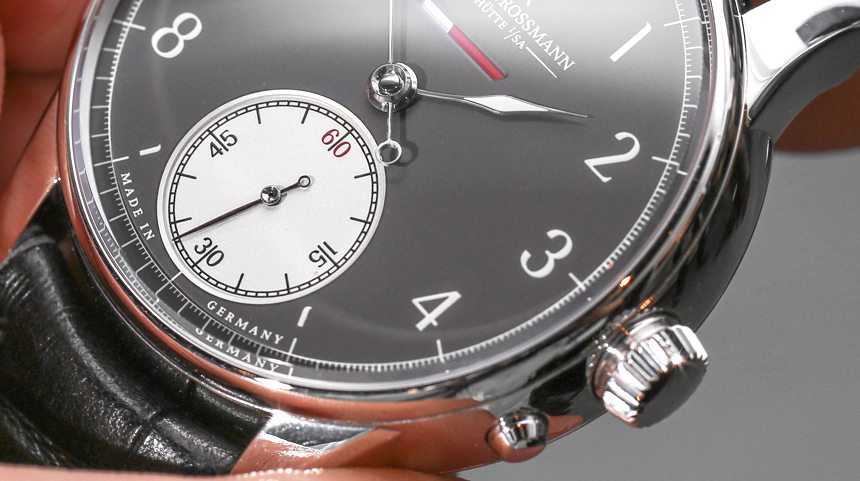 It isn’t often that you find traditional timepieces such as this with linear “gauge-style” power reserve indicators. Under the brand’s logo on the dial is a thin horizontal window with a disc behind it that colors the line from white to increasing amounts of red as the power reserve in the manually wound movement goes down. This is not only easy to read and understand, but also allows Moritz Grossmann to add the functionality of a power reserve indicator without having to add an entirely new dial to the face of the Benu. 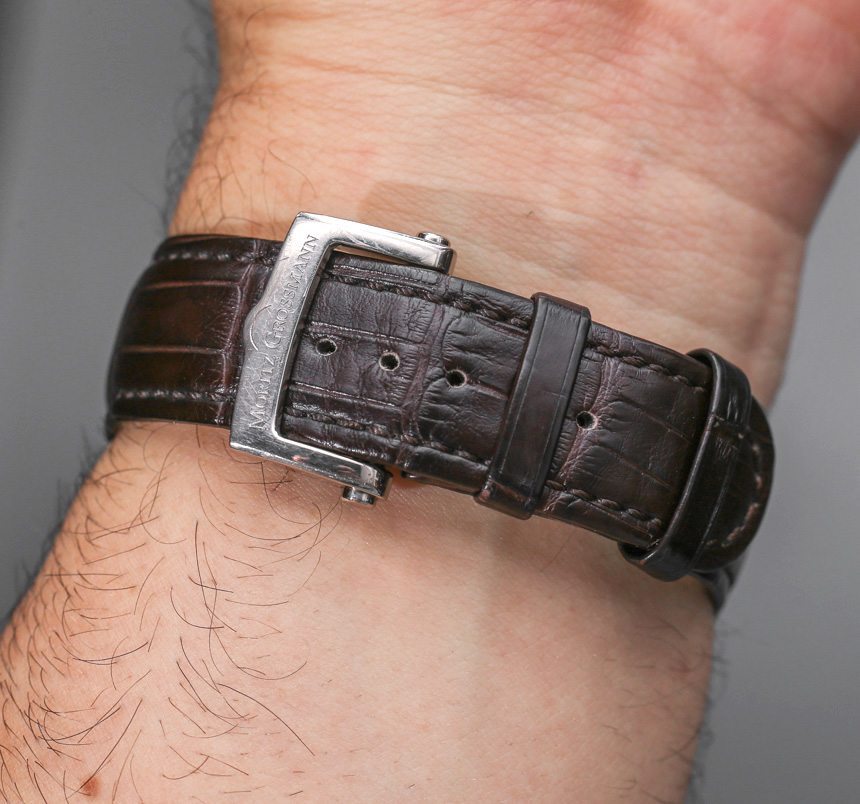 The last Moritz Grossmann watch I went hands-on with was the Benu Tourbillon that showcased the top-end of the brand with what is currently their most complicated movement. Interesting and just exotic enough, the Benu Tourbillon is nevertheless not a timepiece people would probably wear on a daily basis. The Moritz Grossmann Benu Power Reserve, on the other hand, has a lot of beautiful details and hand-decoration, but is nevertheless designed with daily convenience in mind. 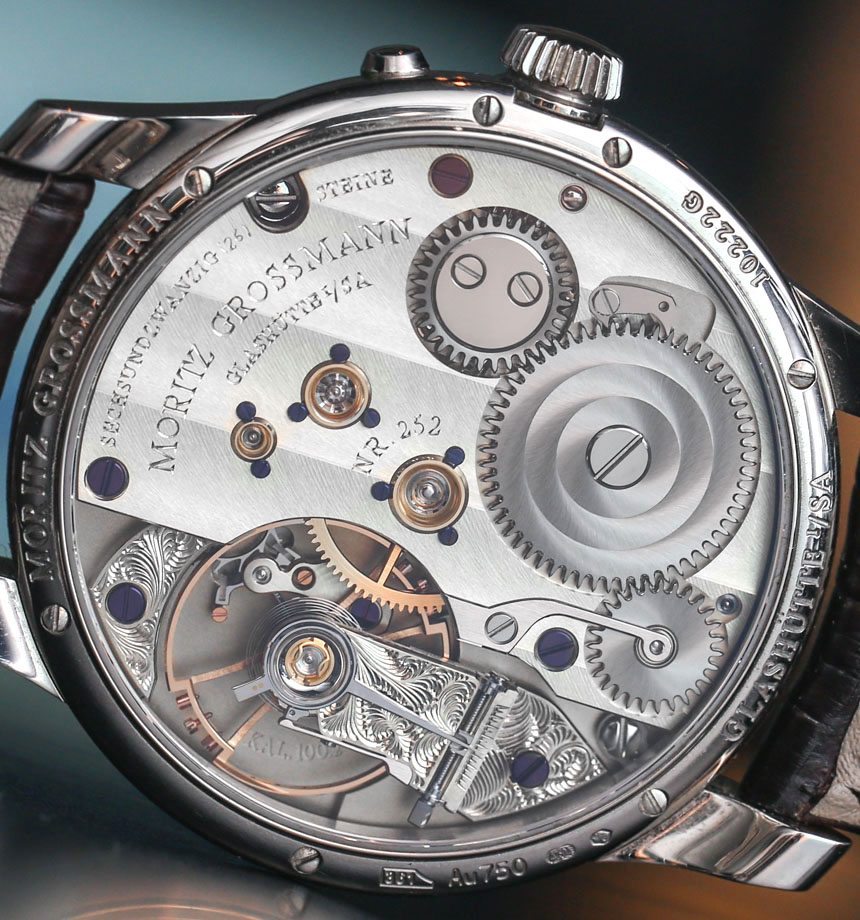 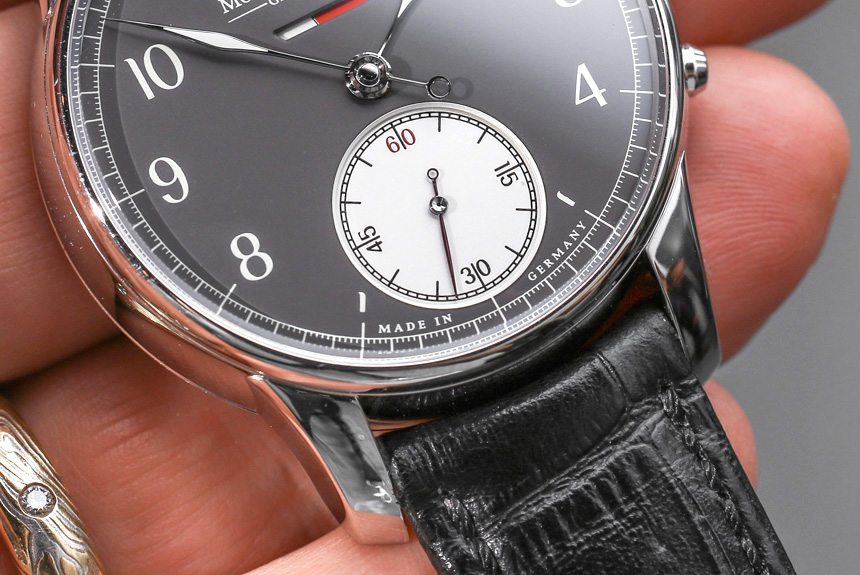 In typical Glashütte-fashion, the in-house-made Moritz Grossmann caliber 100.2 manually wound movement has a lot of visual hallmarks of the region. This includes bridges produced from German Silver as well as features such a gold chatons, blued (well, actually “purpled”) steel screws, a hand-engraved balance cock, as well a relatively large balance wheel spinning at 18,000bph. In reality, many of these features are borrowed not from historic wrist watches but from pocket watch movements. Efforts over the last 20 or so years have been about taking traditional elements of Glashütte-area watch making history and translating them for wrist watch versus pocket watch movements.

Even the dials of most timepieces made in Glashütte are inspired by historic pocket watches and not wrist watches. Today, this formula is working very well, as demand for timepieces from the region is quite high. And while prices are by no means cheap, we are still experiencing values better than what we often find from Switzerland (in many instances, for arguably much better products). 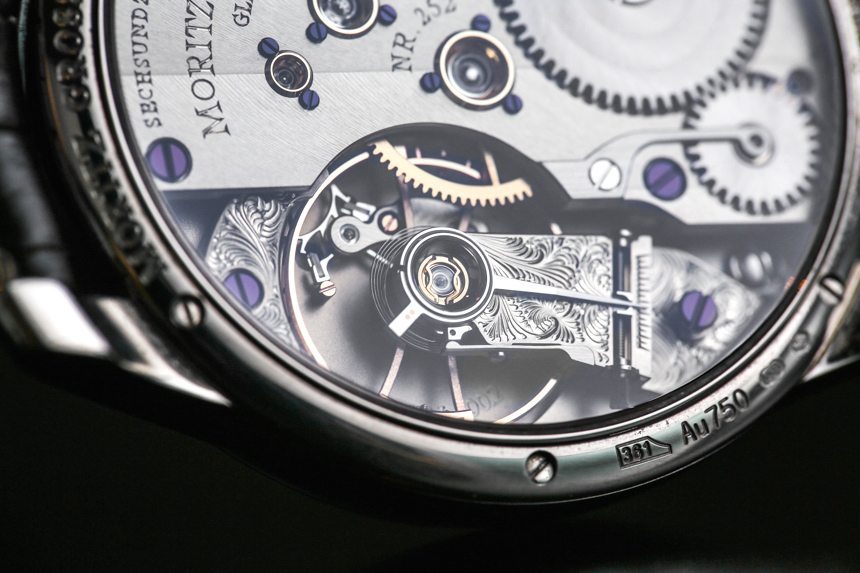 The caliber 100.2 also has a lot of features exclusive to Moritz Grossmann including their own balance wheel design (the “Grossmann Balance”), an “index adjuster” for finely adjusting the rate which, according to them, does not disturb the equilibrium of the balance wheel during the adjustment process, and also running gear start/stop system. 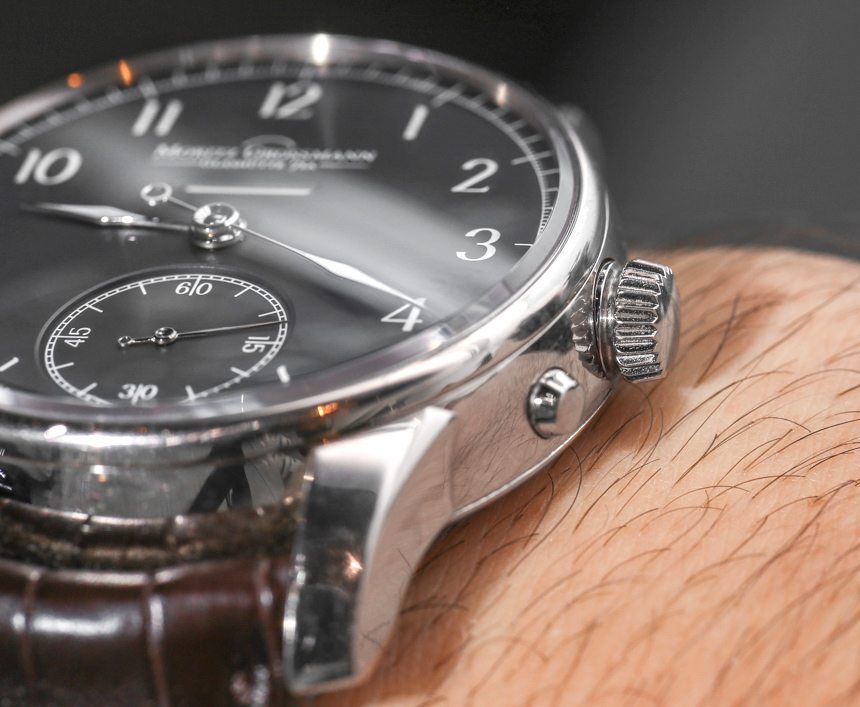 This latter system is why there is both a traditional crown and a small pusher under the crown. To set the time, you pull out the crown as normal, but it pulls back in. This reduces the amount of time the crown is “open” and thus allows for less dust to get into the movement and offers more protection, as lot of times crowns are (as inexplicable as it sounds) not pushed back in because the wearers forget. So, for the Moritz Grossmann movement, you pull out the crown which activates a “stop seconds” system which pauses the movement. You can then set the time, and when you want the running gears to begin again, you just press the pusher under the crown. The company calls this “the Grossmann Winder with Pusher.” 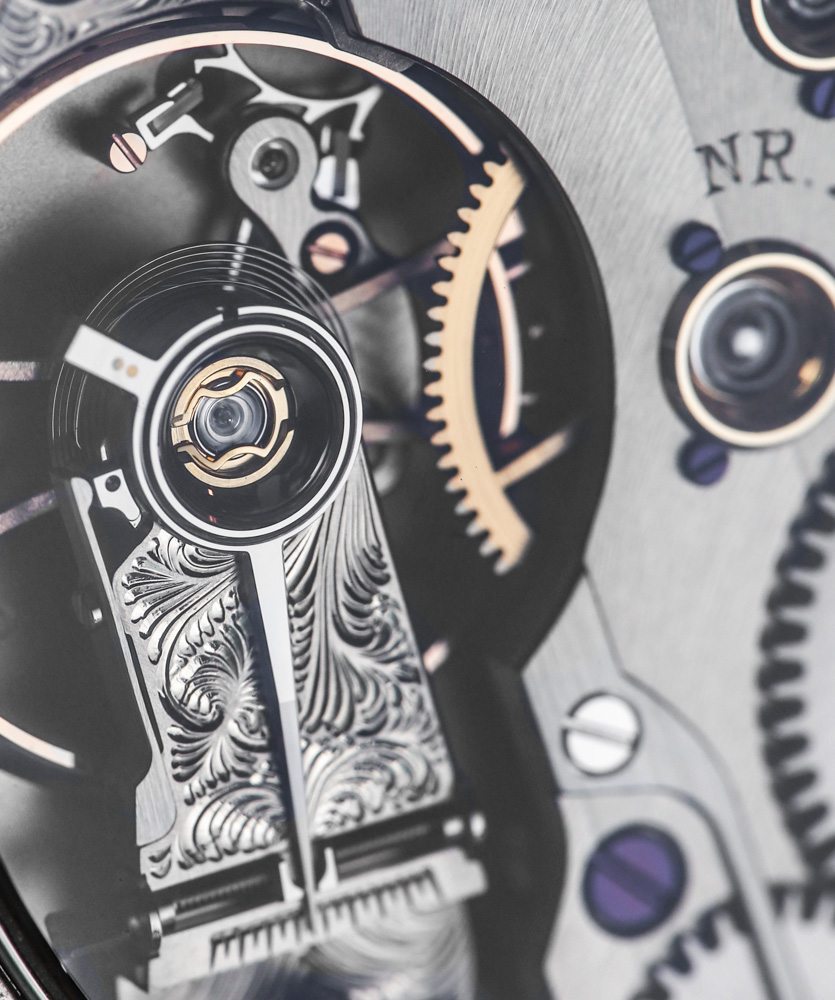 As you can see in my images, the 100.2 movement is very beautiful, and if what Moritz Grossmann has put into the movement is successful, then it will offer a high degree of performance as well. I think that even though people who strictly want accurate watches will go with quartz or other electronic timekeepers, it is a core part of horological fascination to not only want beautiful mechanical watches, but also accurate mechanical watches.

Did you notice anything else different about the this 100.2 and other Moritz Grossmann movements – at least aesthetically – compared to other watch movements? It is really easy to miss given that there is a hint of red in the movement since they “purple” rather than “blue” the steel screws using a heat treatment. There are no synthetic rubies. Instead, Moritz Grossmann uses clear synthetic sapphire jewels as palettes instead of rubies. I have no idea if there is a performance advantage here, but it does help give them just one more distinguishing factor to separate themselves from the other high-quality watch makers in the region. 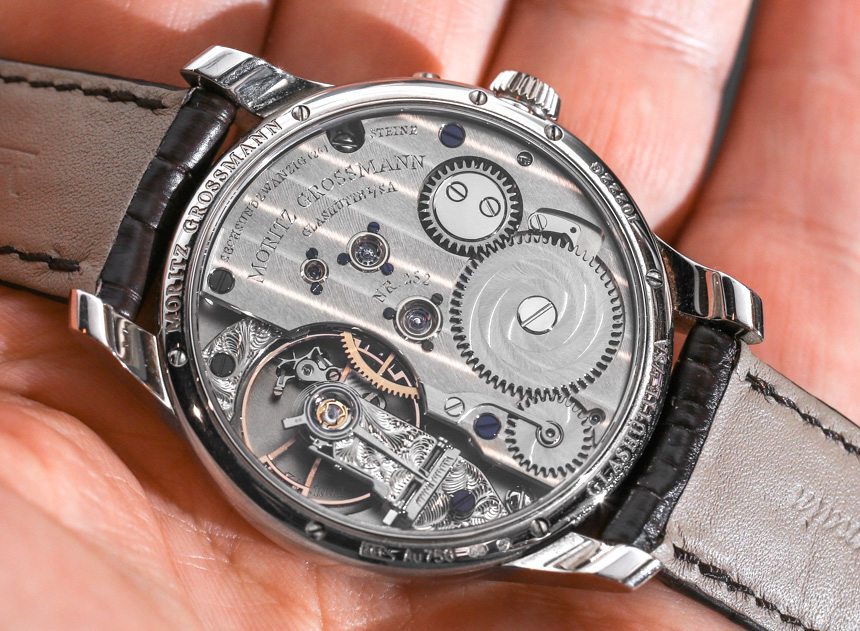 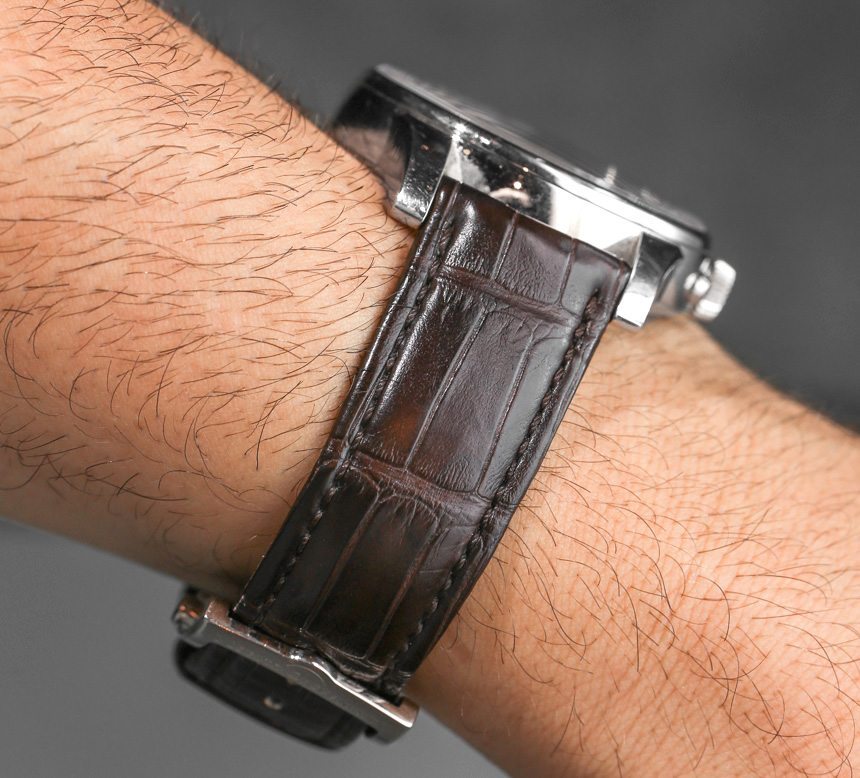 Produced from 227 parts and with 42 hours of power reserve, the beautiful movement takes up the majority of the caseback – which is what we want to see – and is really the main attraction to this otherwise very handsome collection. The Moritz Grossmann Benu Power Reserve case itself is 41mm wide and 11.65mm thick making it bold, yet inherently classy in its proportions. While I don’t prefer manually wound watches, I will personally accept them if they come with a power reserve indicator – and for that reason (along with others), I find the Moritz Grossmann Benu Power Reserve to be a hell of an attractive watch. 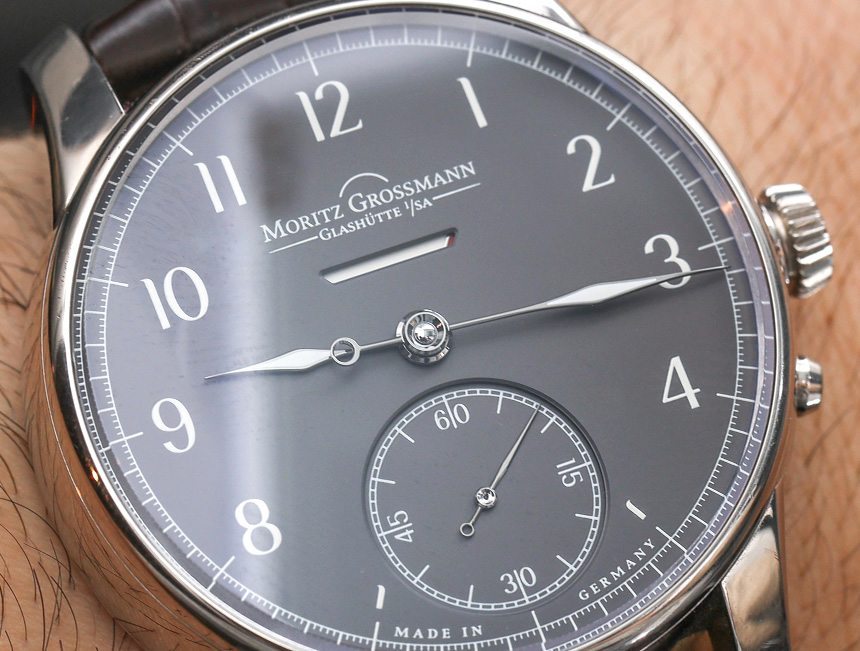 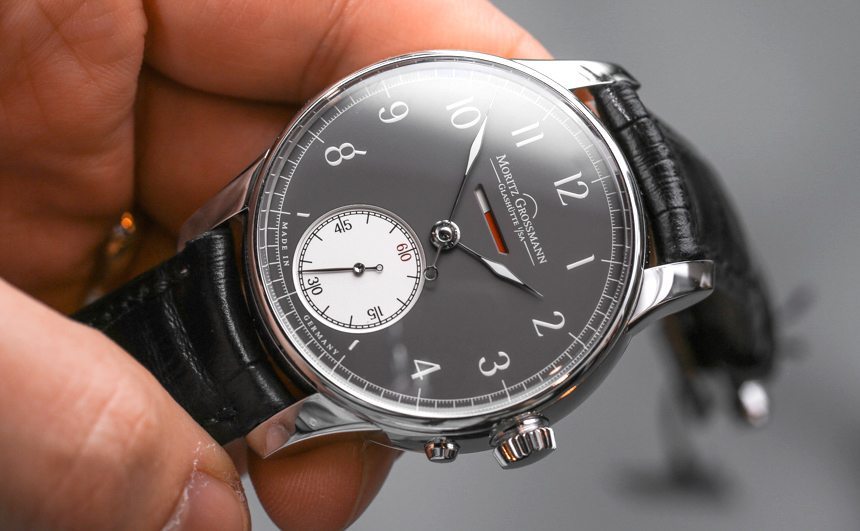 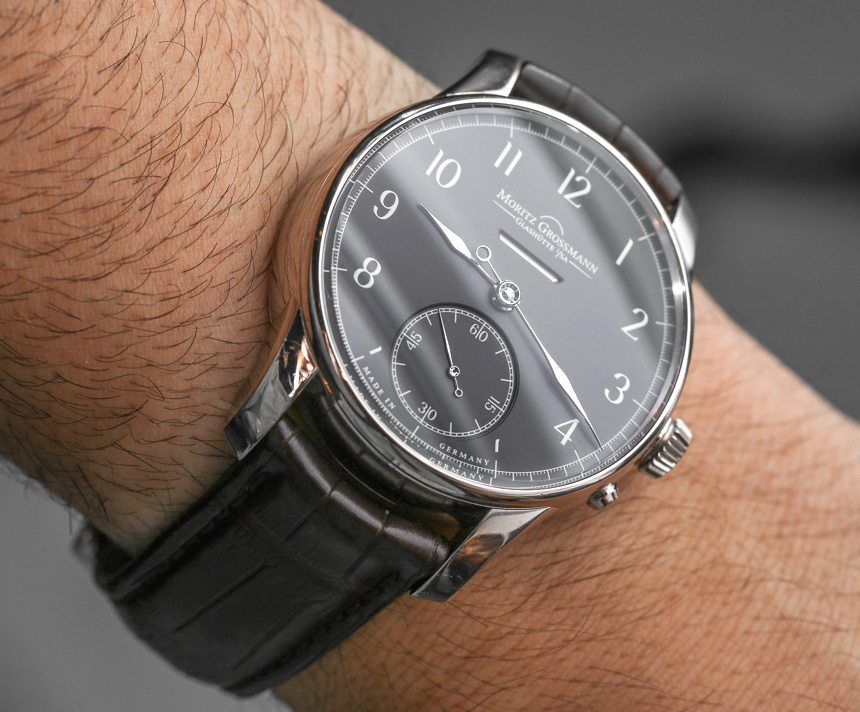 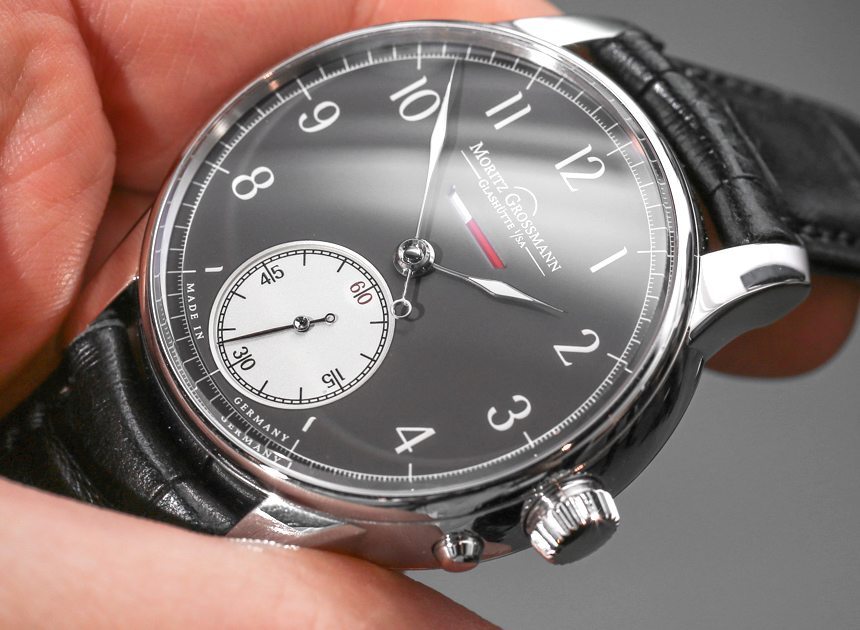 Conservative and highly manicured designs such as this may not be as immediately visceral or exciting as a sports watch, but offer enormous versatility when it comes to being worn with anything but the most casual of attire. An otherwise great watch, Moritz Grossmann still needs to compete with the very impressive work of its colleague brands in the Glashütte region. Attached to a fine alligator strap, prices for the Moritz Grossmann Benu Power Reserve are 28,100 euros in 18k rose gold, 29,100 euros in 18k white gold, and 38,500 euros in platinum. grossmann-uhren.com