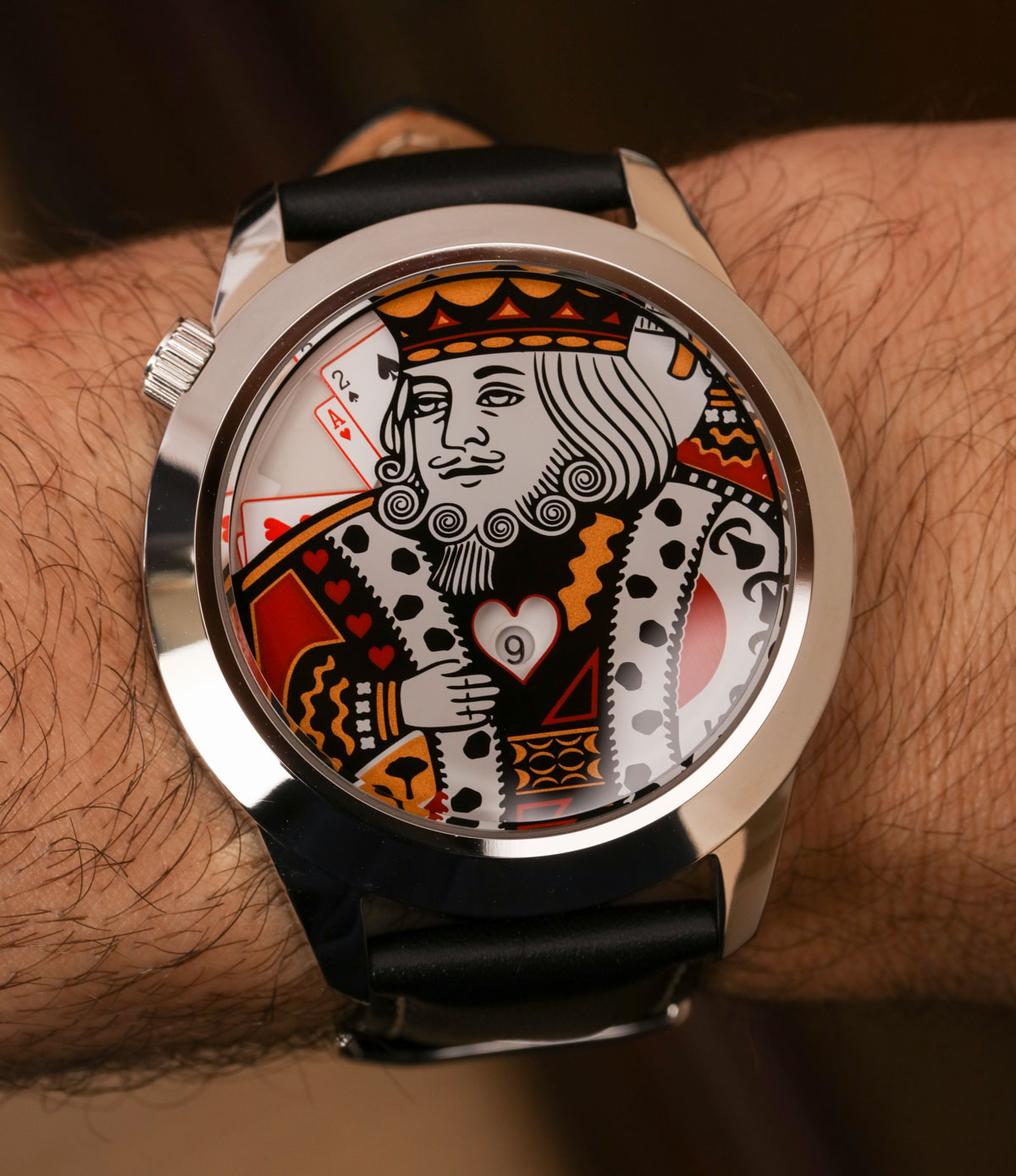 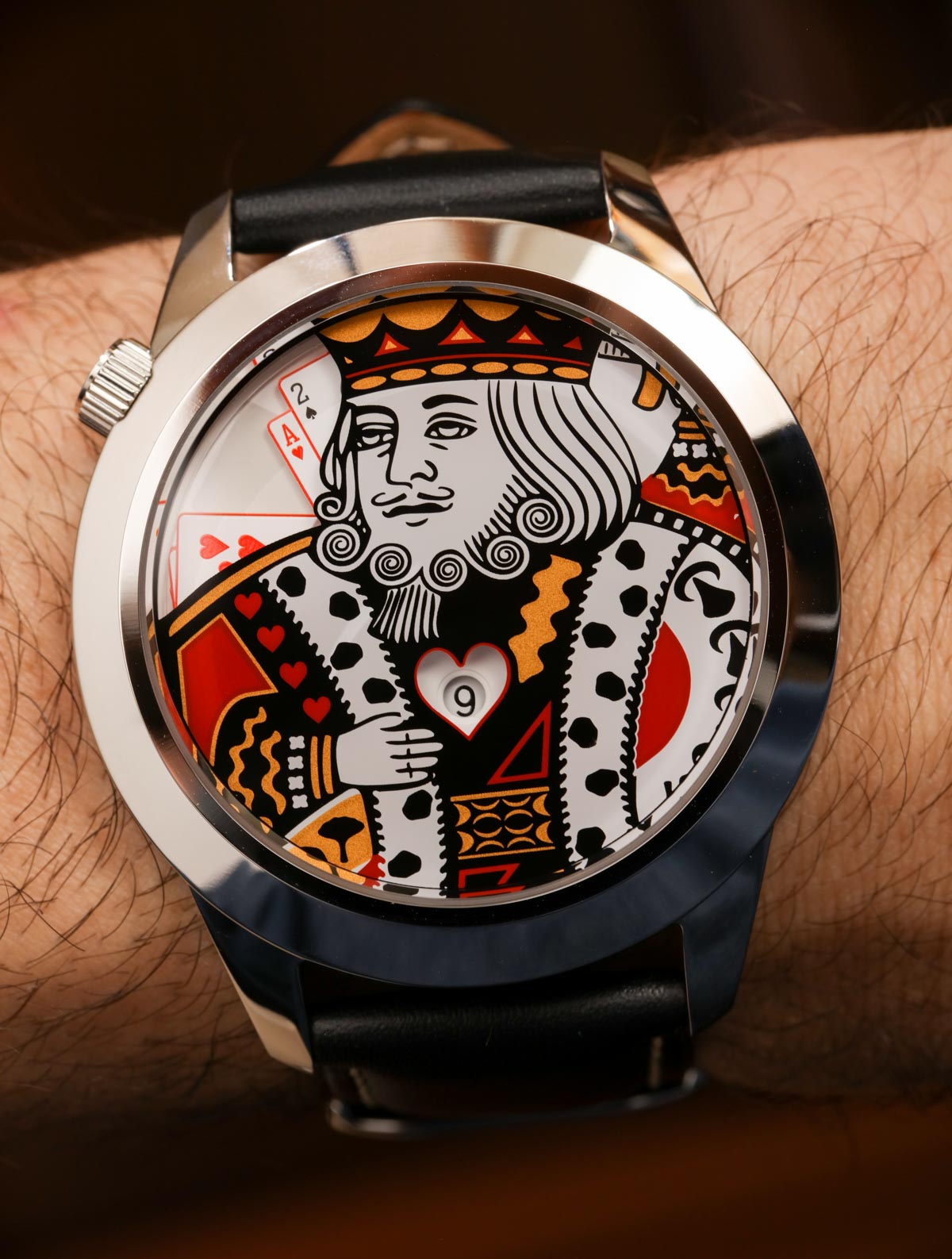 The 45mm wide “XL” version of the Mr. Jones Watches King watch is finally here and it also comes with a price that is about $200 more than the original Mr. Jones King watch that was admittedly a very budget-friendly product at $279 USD, given its creative distinction. You can still buy the smaller, 37mm wide original King watch but the Mr. Jones Watches King XL not only offers the King in a more attractive size for most male wrists, but it also upgrades the movement and overall fit and finish.

At its heart (no pun intended), the King watch is a jumping hour timepiece with the minutes being read via a disc cut to look like moving sets of playing cards. The aesthetic theme of the King watch is clearly the character art of ubiquitous playing cards. Mr. Jones Watches was correct to feature a visual so common, so connected to the notion of gaming and pursuit, and so little used in fashion, that the result of wearing a playing card deck king on your wrist feels sort of novel. Now, the luxury watch industry has been known to produce a universe of wristwatches which (I’m sorry to say) appear to more or less celebrate gambling. That is opposed to celebrating the art of playing cards or gaming paraphernalia. I personally (not much of a gambler) do not find interest in “Casino-themed” watches, but I do appreciate a playing card deck-themed wristwatch. 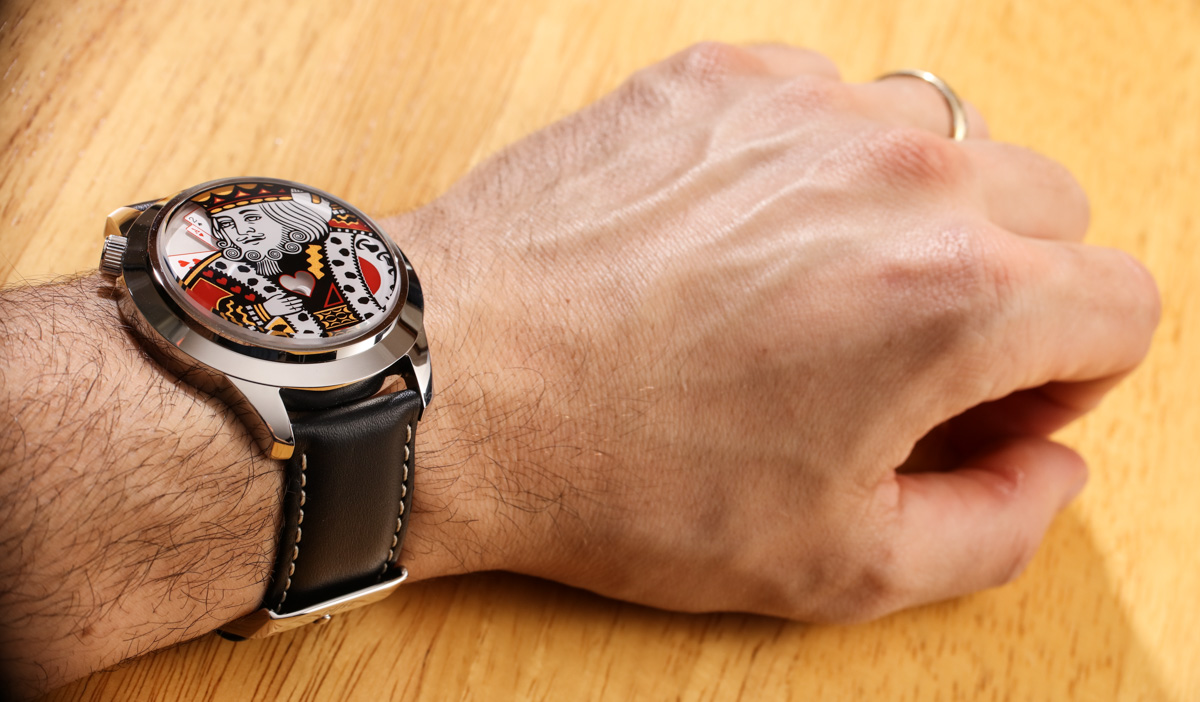 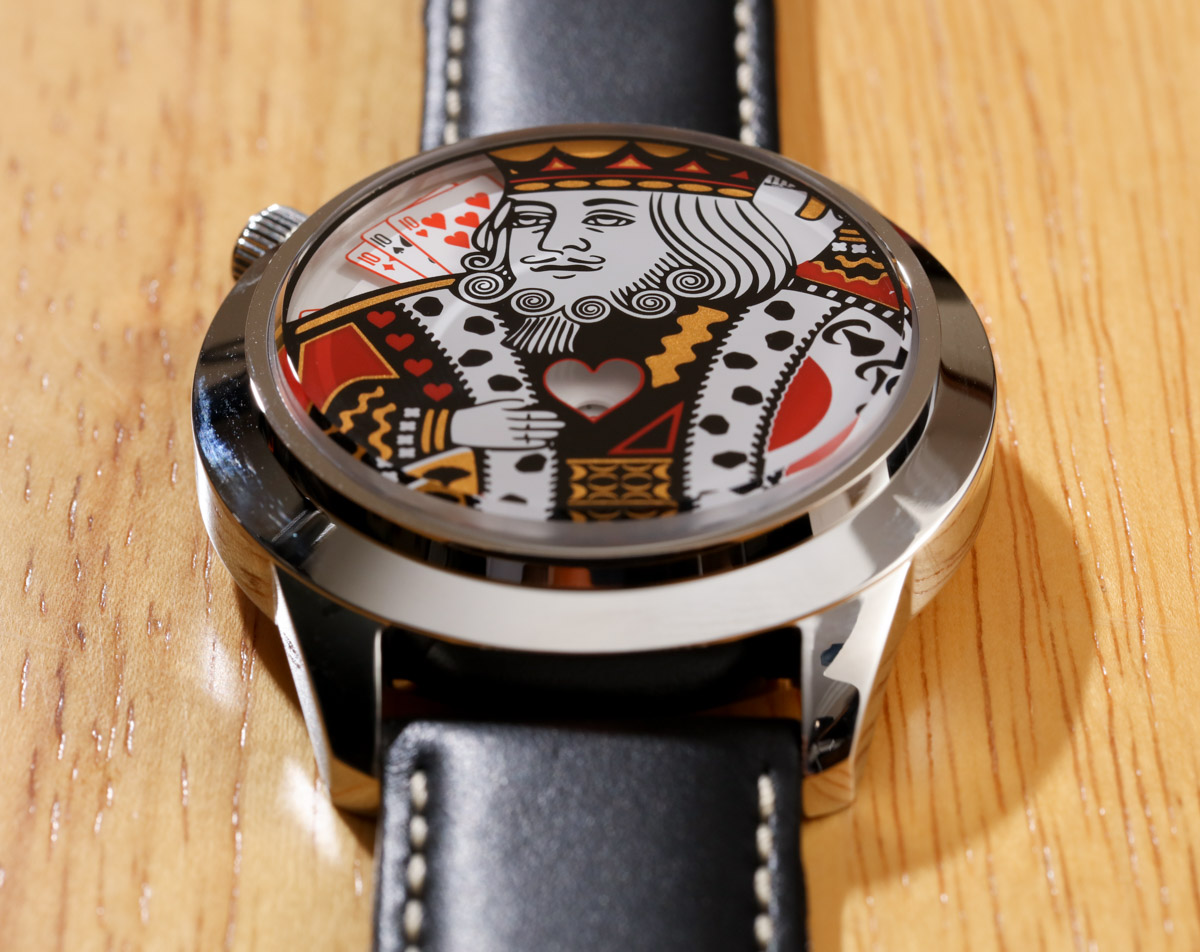 The top crystal of the King watch is reverse-printed with the King artwork, and little windows are left for the hour and minute indicator zones. The effect is very crisp, clean, and attractive. It is certainly more fashion than it is horology, but there is plenty of room for that out there. At worst the design is kitsch. At best it incorporates a stable part of our culture as rewarding personality to something we use to tell the time.

After doing some research in trying to properly originate the art style of playing cards, I was not able to attribute these iconic character designs to any one artist or place. Playing cards seemed to naturally evolve over a few hundred years in various parts of Europe only to later come to the United States. It is one of the most versatile and well-balanced gaming mechanisms ever devised, and it could not have happened without experiencing a true evolution to get where it is today through many iterative design instances. 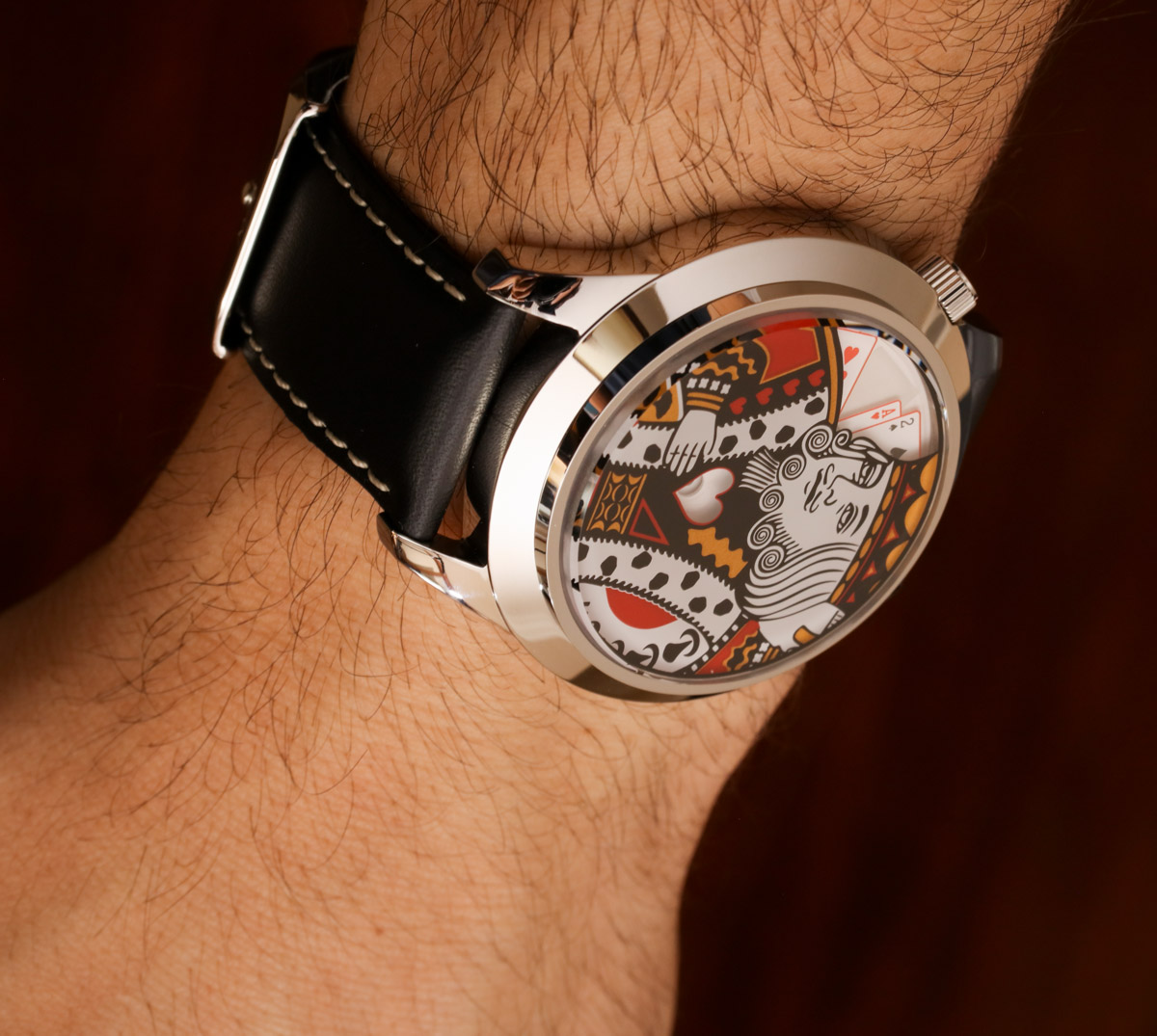 In a way, the artwork on the dial is the “people’s work” and I believe it legally exists in the public domain. That means anyone can use these characters without having to ask permission or pay royalties. Again, another brilliant move by Mr. Jones Watches – and I think the almost universal awareness of these characters will only help the success of the watch. Currently, only the King watch has the King XL version, but Mr. Jones Watches also has a Queen watch that only comes in the smaller 37mm wide case.

The King XL watch has a 45mm wide 316L steel case that is water-resistant to 50m and has a simple, but fun design to it with lots of flat-polished surfacing. The case is 13mm thick and has a 53mm lug-to-lug distance. It is certainly a modern design, but also a mature one while not being instantly mistaken for something else. Over the dial is a sapphire crystal. Inside the watch is a newer form of jumping hour automatic mechanical movement that is now based on a Japanese movement, versus a Chinese one. This fact alone helps justify the more expensive price of the King XL, as well as the other upgrades and materials in these newer models. 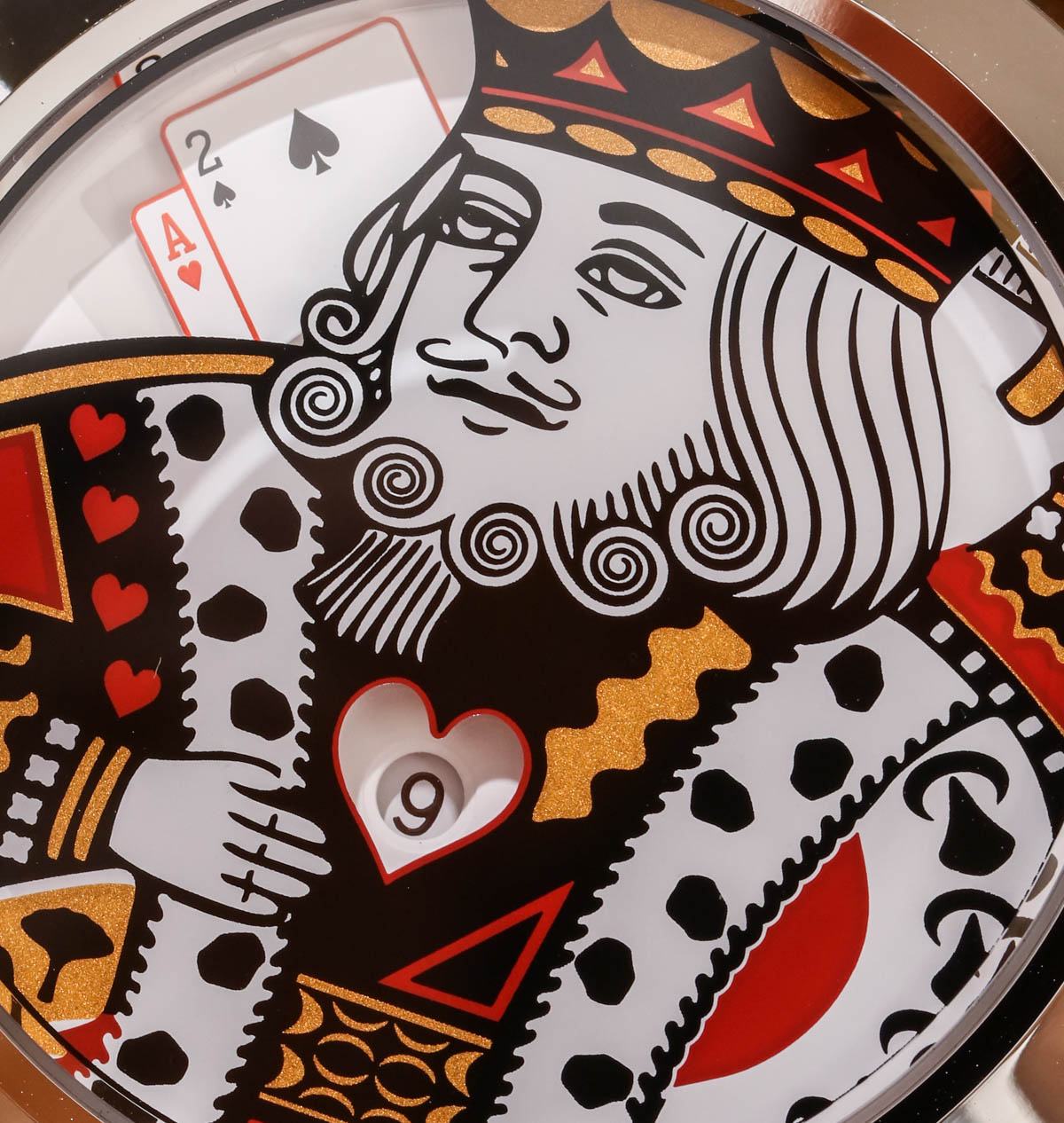 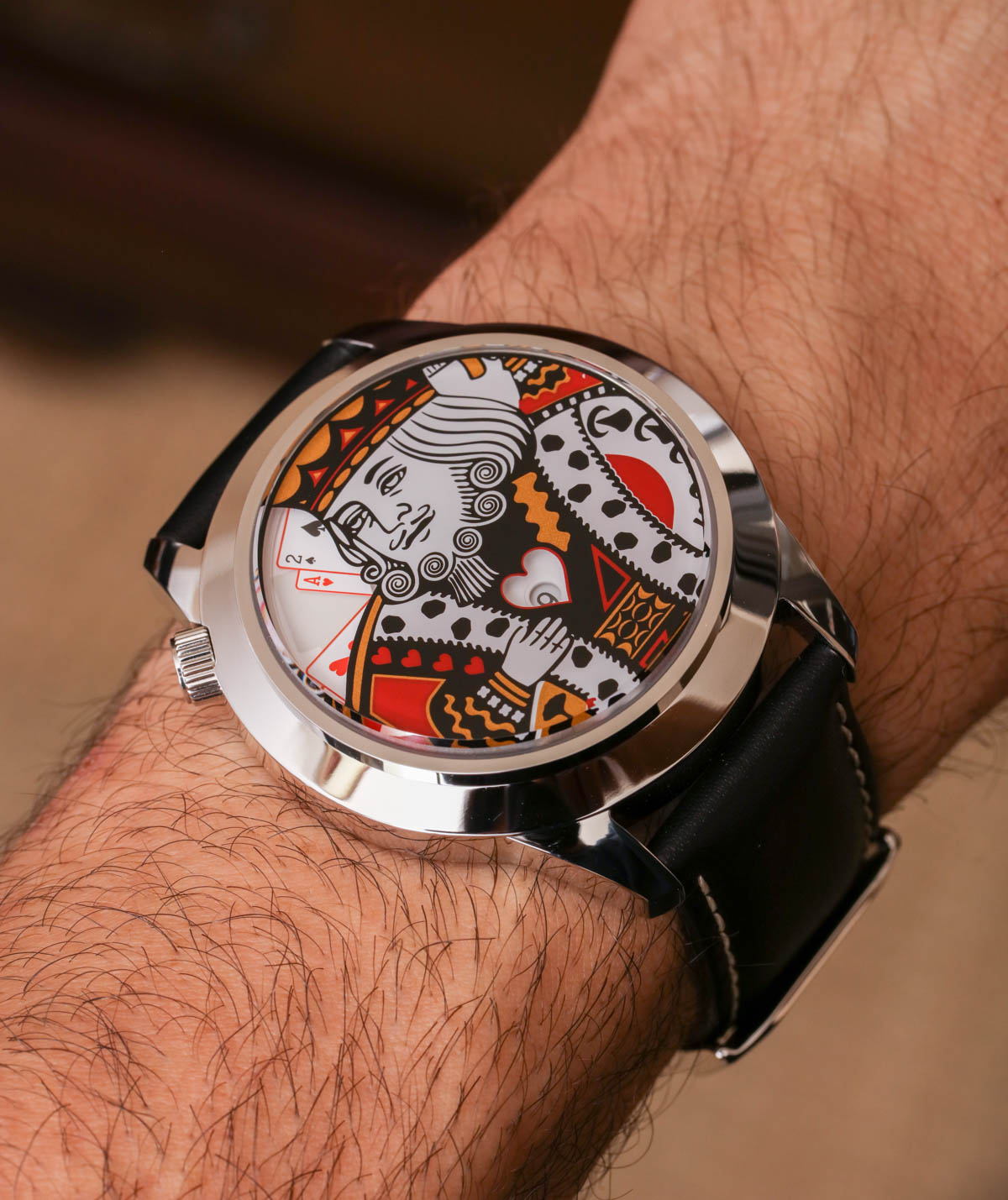 Inside the watch is a base Japanese Miyota caliber 9015, which has been slightly modified with the module that offers the jumping hour and disc minute readout for the time. The 9015 movement operates at 4Hz (28,800 bpm) with about two days of power reserve. Based on the smaller size and less reliable movement of the original King, this is the first Mr. Jones Watches King model that meets my standards as a watch lover, and that’s great because I think the King XL’s fun personality will make it appeal to a whole new range of customers.

While the technical elements of the King XL satisfy my needs as a watch lover, this type of timepiece isn’t meant to impress other watch nerds. This is a fashion watch for when you think that wearing a playing card King character on your body adds to the style message you are trying to tell. The dial is clearly not the most legible, with the hour indicator heart-shaped window being both on the small side and difficult to read at an angle given the depth of the dial. So that means to read this watch dial easily you need to look at it straight-on. You also can’t really read the time down to the precise minute. The minute indicator disc has six indicators – one for each of the ten minute segments in an hour. The Ace card is used to represent “10” and other number cards are used to indicate the various ten minute segments. You can read the time with a 2-4 minute level of precision. With our mobile phones and given the fact that this watch is meant to be for fun – I can forgive this and simply would know that this isn’t a sport watch or one to wear when I’d like to glance at my watch a lot in order to tell the time. What it lacks in legibility I think the King XL makes up for in social appeal. 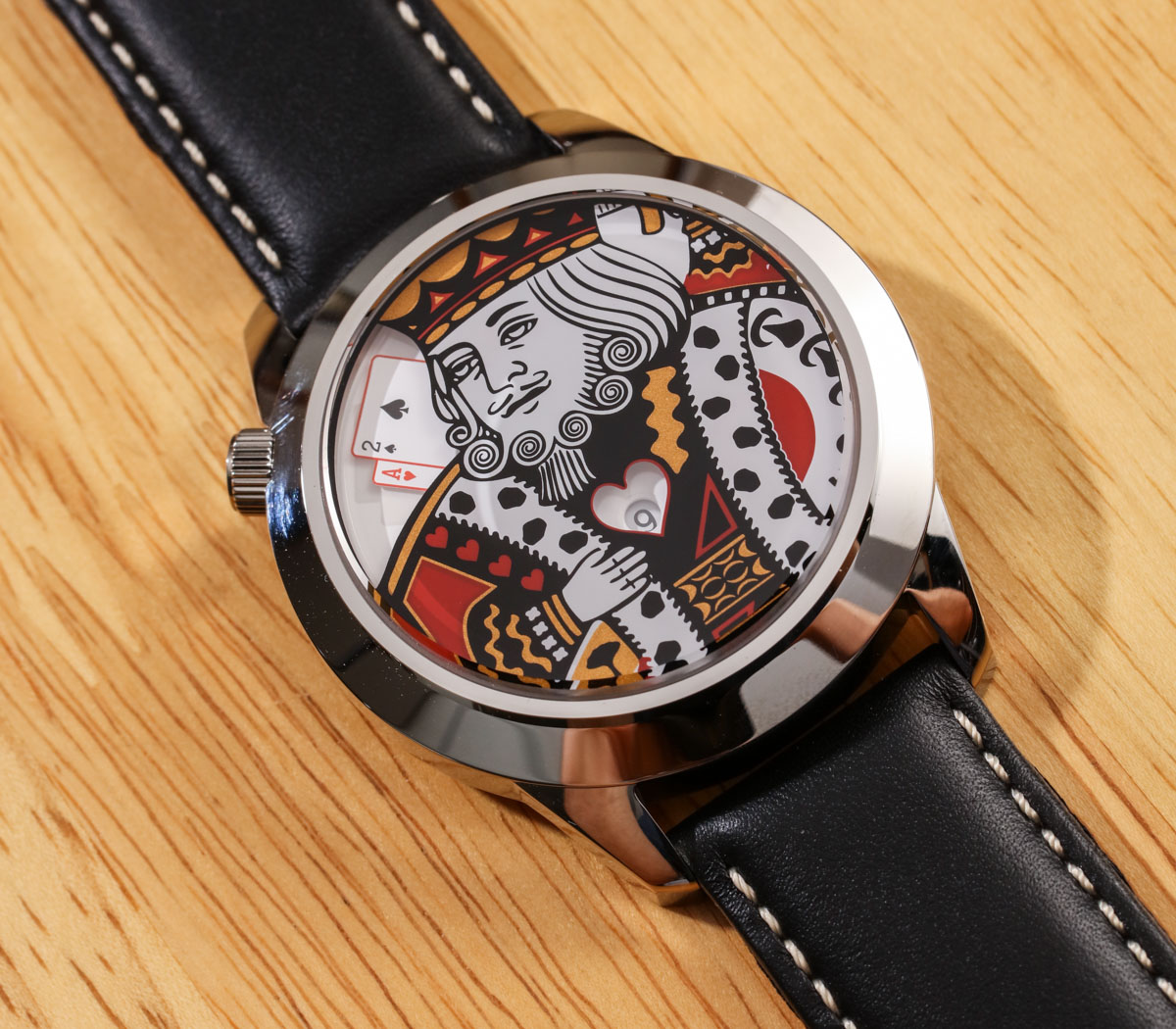 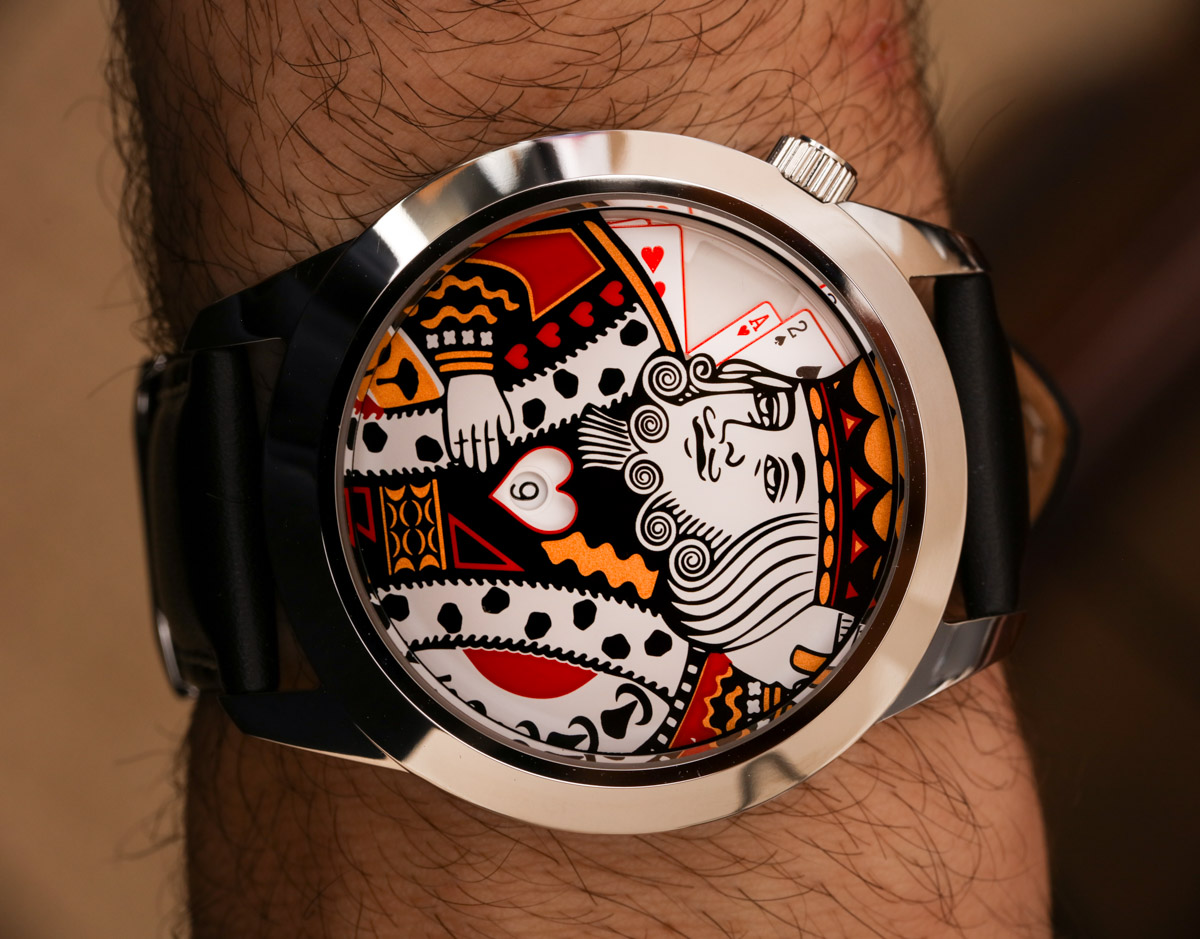 The rear of the steel watch case is pretty basic with the name of the watch and some playing cards etched into the caseback. Though I have to say that for some reason the back still says “King” when this watch is actually the “King XL.” All I’m saying is that in the future someone might get confused because the original King is a different model. Mr. Jones pairs its standard, supple black leather strap with the watch. I think there might have been a slightly missed opportunity to play with the colors of the watch in the stitching – but perhaps that is best served by an aftermarket strap which can even further bolster the watch’s core personality.

While I wouldn’t wear it on a daily basis, this is the price point I want to spend on interesting fashion watches that don’t make me feel like I have to also stop being a watch lover. Over the years I’ve been teased with a host of cool watches along the lines of the King XL, but at prices in the thousands or many (many) thousands of dollars. I’d prefer to spend luxury dollars on more universal timepieces – and under-$500 fashion statements like this make a lot more sense. Price for the Mr. Jones Watches King XL is $489 USD. mrjoneswatches.com

Necessary Data
>Brand: Mr. Jones Watches
>Model: King XL
>Price: $489 USD
>Size: 45mm wide, 13mm thick, 53mm lug-to-lug distance
>When reviewer would personally wear it: Not being a sports watch or particularly suited for quick reading of the time this is a more artistic, fashionable expression of taste and personality. In that regard it does well, so I’d wear it anytime I want to spice up my personality a bit.
>Friend we’d recommend it to first: Playing card lovers are an obvious choice. Even though it isn’t a gambler’s watch, I can see a lot of Poker and Blackjack players enjoying a timepiece like this.
>Best characteristic of watch: Cleverly takes an iconic piece of artwork that no one seems to own and turns it into a playful wristwatch – now with a better movement, case, execution, and size.
>Worst characteristic of watch: Legibility is not ideal in addition to the time reading system being less than perfectly precise. Some people might want an intermediate size between the 37mm King and 45mm wide King XL models.