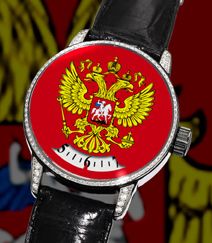 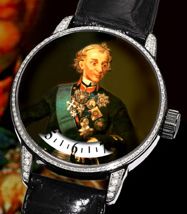 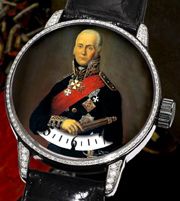 Did you know that watches make a good place to put paintings, other than just the plebeian task of telling the time? Thats right, don’t waste valuable art real estate when you could be toting around portraits of dead aristocrats on your wrist.

Knowing this obvious fact, Swiss watch company Angular Momentum has been making Eglomise watches for a while, and their new “Imperial Russian Collection” is perhaps the stateliest yet! They are part of Angular Momentum’s Artisan Collection, which are produced at their Swiss location outside of Bern. How many times have you wished that you could carry around Admiral Ushakov on your wrist… and closer to your heart. Well, your ship just arrived, now you can. The collection of finely painted watch faces includes such favorites as 1) General Suvorov, 2) Admiral Ushakov, 3) Admiral Kutuzov, 4) Czar Peter The Great, 5) the Russian Empires Big Coat of Arms, 6) the Imperial Double-Headed Eagle, and more!

For those of you curious how Angular Momentum can get such lovely looking painting on such small surfaces, they use a technique called Eglomise, which reserve paints on the back of glass. So you are looking at glass which is painted underneath (on the reserve side). The watches have either traditional analog watch hands, or a rotating disc system, which might not be as specific, but won’t get in the way of you saluting your fallen heroes. 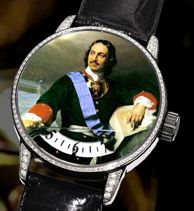 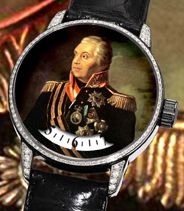 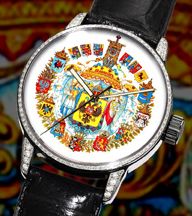 Also, don’t miss the diamonds placed along the bezel and lugs in most of the Eglomise watches, and all in the Imperial Russian Collection. This shiny addition will have everyone trusting you with their own personal foreign policy. Nothing says, “I am a person of worldly renown,” like a diamond framed glass painting watch. A true testament to the Imperial Russian Collection.

Expect the hand painted models to be quite expensive, but others to be, well… just expensive. Angular Momentum has a large series of Eglomise watches with many different types of images to enjoy. They actually have quite a large collection of these watch, and most are pretty cool. I just don’t know how I would incorporate the Behemoth’s of the Imperial Russian Empire into my wardrobe and daily lifestyle.