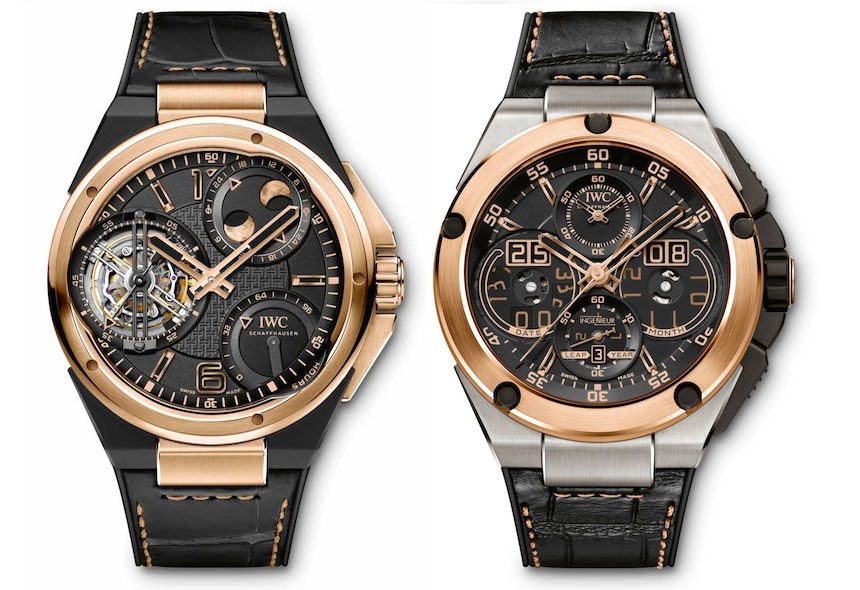 Two new and indeed highly complicated additions to the IWC Ingenieur family for 2015 are the IWC Ingenieur Constant-Force Tourbillon and the IWC Ingenieur Perpetual Calendar Digital Date-Month, both now available in a new colorway dominated by red gold. This grants us the opportunity to take a closer look at these similar and yet oh-so-different watches from IWC. 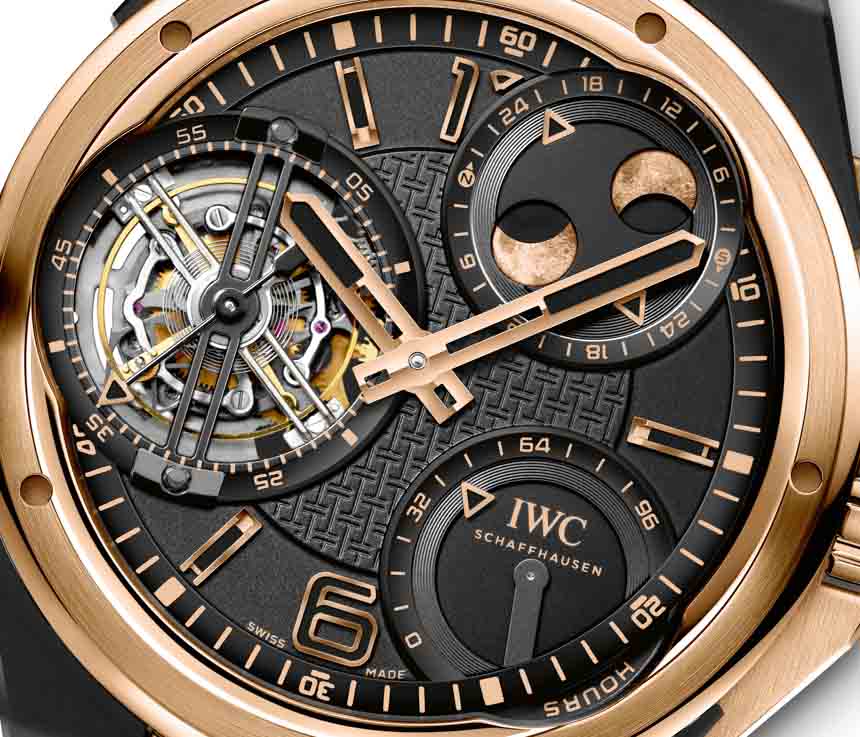 Starting off with the big (well, bigger) gun, the IWC Ingenieur Constant Force Tourbillon is what it says on the cover – and, in fact, quite a bit more. The tourbillon, as you may have seen in the video of the $750,000 Portuguese Sidérale Scafusia, has a “dead-beat” ticking motion to it, advancing once every second – like a normal seconds hand on most quartz watches. What’s responsible for that is the patented constant-force mechanism that ensures that the amplitude of the balance, and hence, timekeeping accuracy remain consistent. 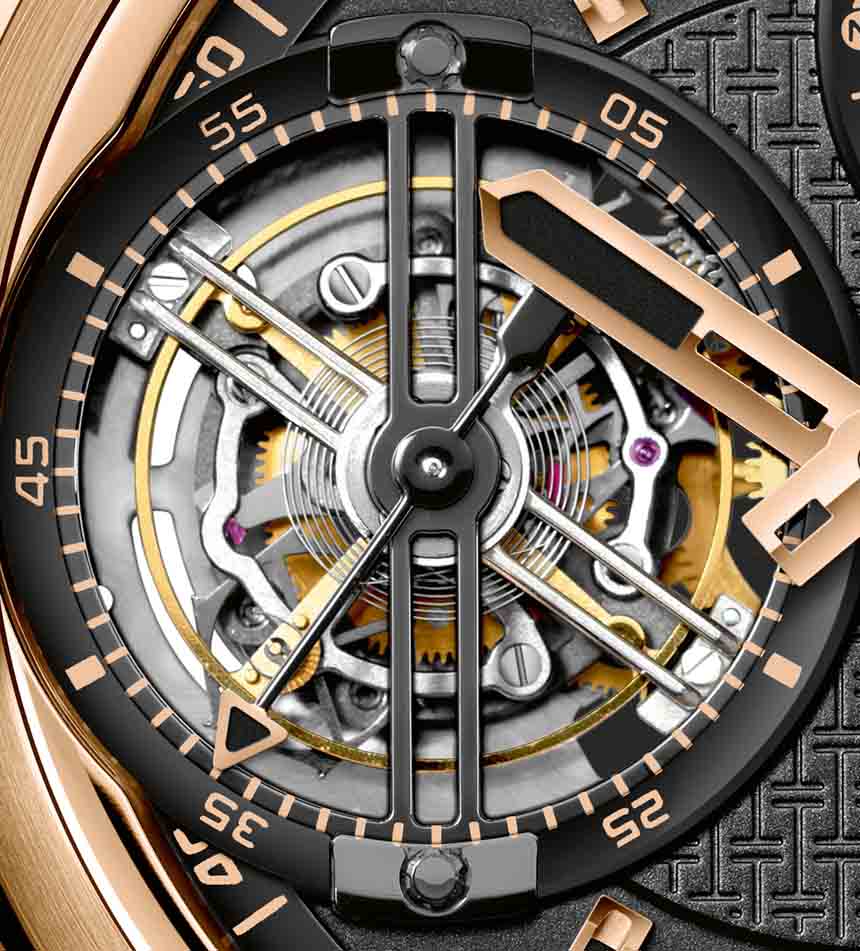 Although the 94800 in-house caliber offers 96 hours of power reserve courtesy of its two mainspring barrels, the constant force mechanism is said to “guarantee an extremely precise rate” only during the first 48 hours (since fully wound). On the note of extreme precision, I have not given up hoping that someday we get to frequently see exact rate results backing up these claims – not that I have any doubts in the movement’s accuracy, but rather I wonder just how extremely accurate it is. Once those two days have passed, the movement switches to “normal mode,” when the tourbillon advances not once, but 5 times every second.

The possible reason for that, although IWC does not elaborate on this, is that once 48 hours have passed, the two barrels do not have sufficient torque to wind up the constant force mechanism’s little spring (which provides the extra oomph and ensures constant, well, force). Consequently, the next 48 hours is spent in normal, 2.5 Hertz “mode.” 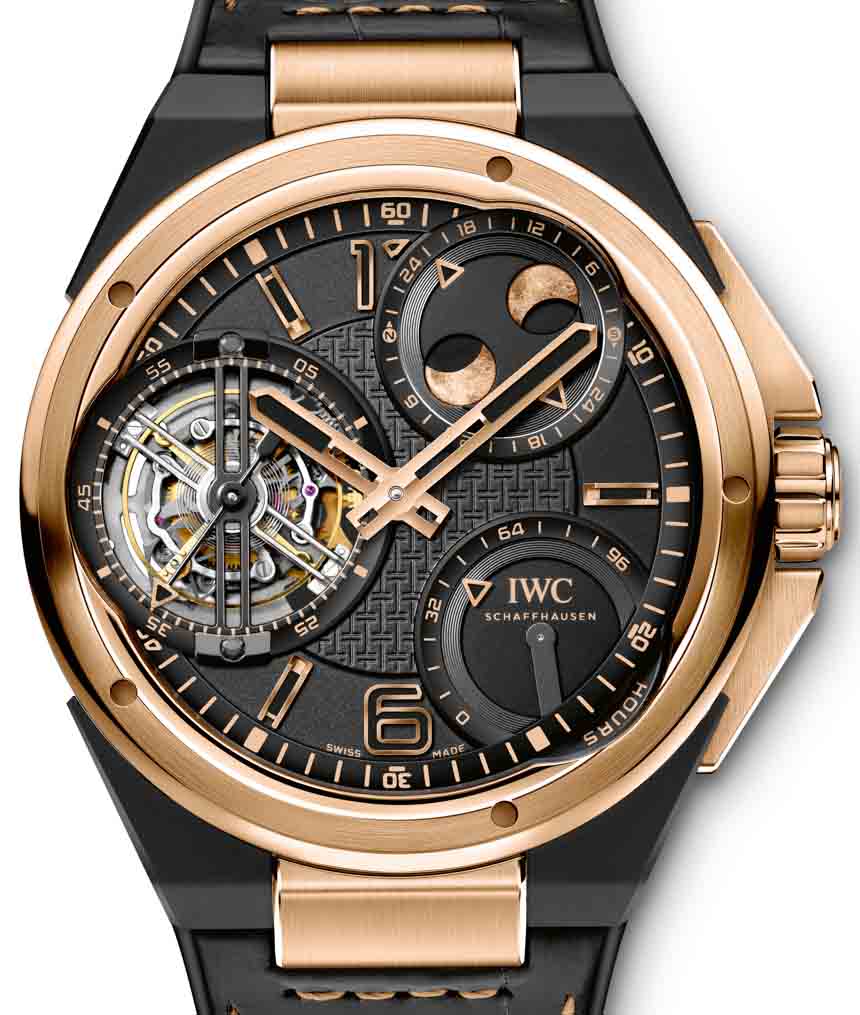 The massive 46 millimeter wide – albeit a rather acceptable 14 millimeter thick – case in red gold and ceramic holds a flat a sapphire crystal, underneath which is a busy-looking dial that accommodates the large cut-out for the tourbillon at 9 (more like between 7 and 11), a power reserve indicator between 3 and 6, and a double moon-phase indicator in the top right corner for both the Northern and Southern hemispheres. 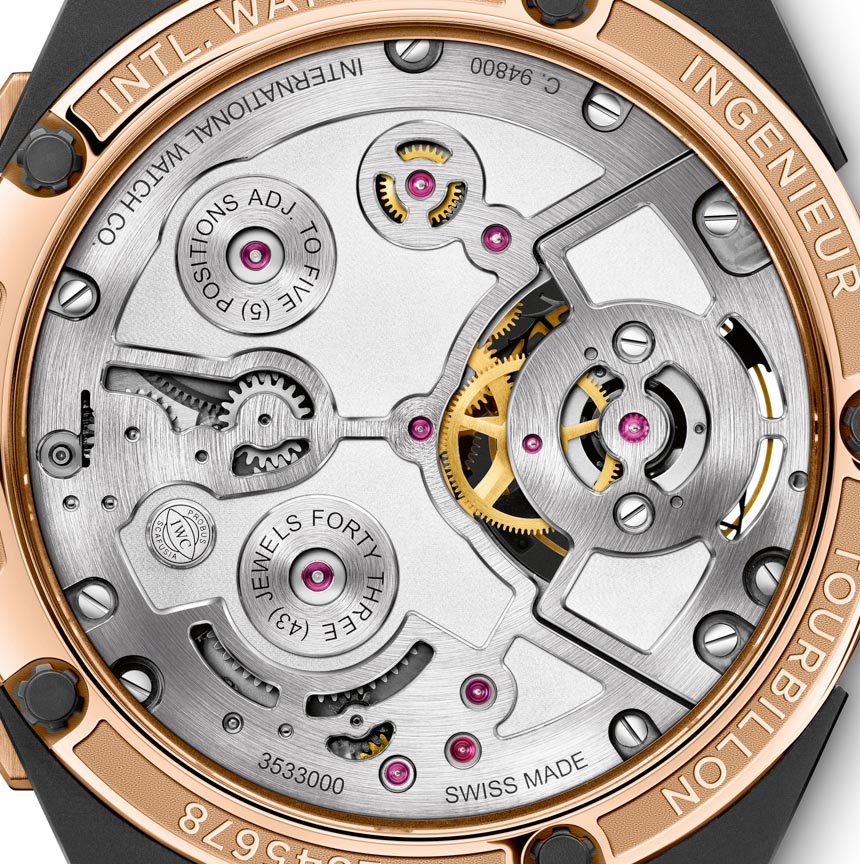 The case back features a large sapphire crystal that makes for a comprehensive look at the back of the hand-wound movement. While the smaller cutouts may cheat the eye, the case back is actually composed of only two large plates, one that secures the two massive barrels, the keyless works, and part of the going train, while the other plate secures the tourbillon and its driving wheel from underneath. What has likely necessitated the use of such a large – shall we say 3/4 – plate, is the fitting and securing of the two mainsprings which are arguably more safely stored by just one large plate as opposed to two smaller ones. 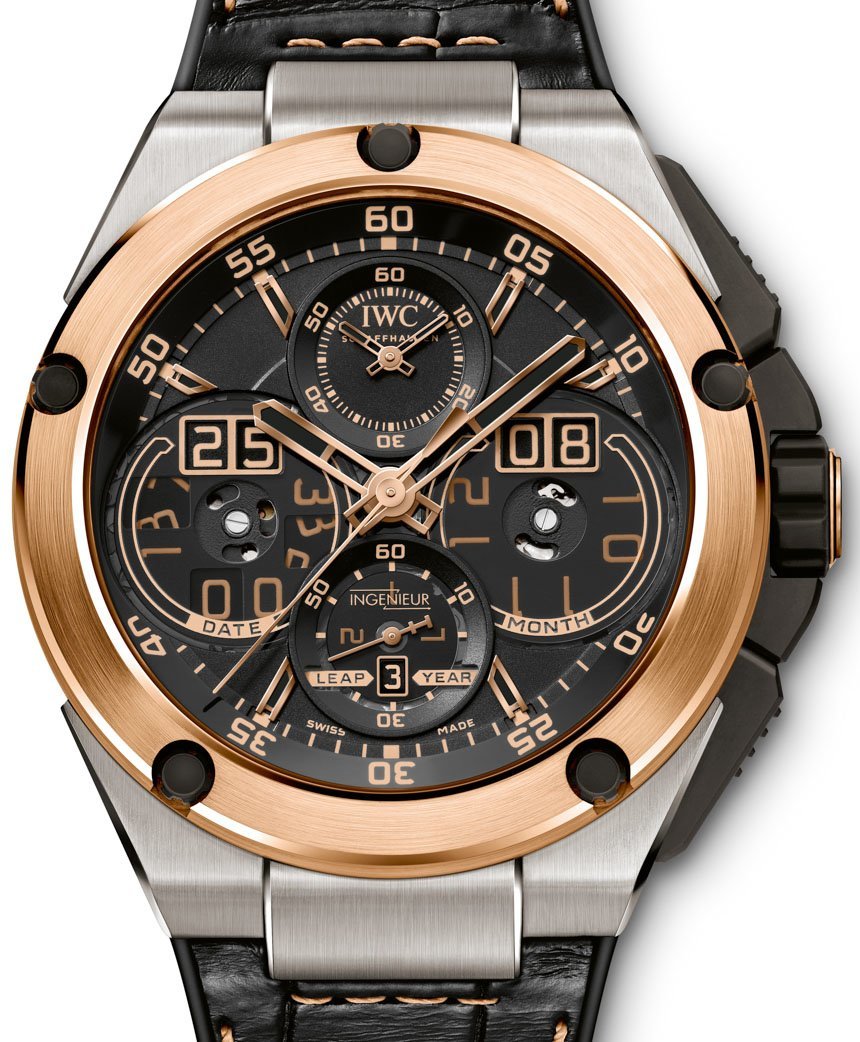 The IWC Ingenieur Perpetual Calendar Digital Date-Month does away with the tourbillon and the moon phase indication, using the generous dial real estate to feature a “digital” date, month, and leap year indication for its perpetual calendar, pairing that impressive (and extremely rarely seen) combination of complications with a chronograph. Because of this selection of complications, the case, although still 46 millimeter wide, now is 17 mm thick, as the 89802 movement requires considerably more space.

The case is in red gold and titanium aluminide; and while the tourbillon – because of the delicacy of that function – is sort of excluded from these remarks, the sportier appearance of the digital perpetual and the implied high-tech nature of titanium aluminide makes the rather soft 18k red gold bezel seem a bit out of place. The fact that IWC first offered this watch with a case entirely in titanium (as we showed you in our hands-on here) further supports that point – gold, in general, is often more of a contrasting than a complementing choice for modern design elements. 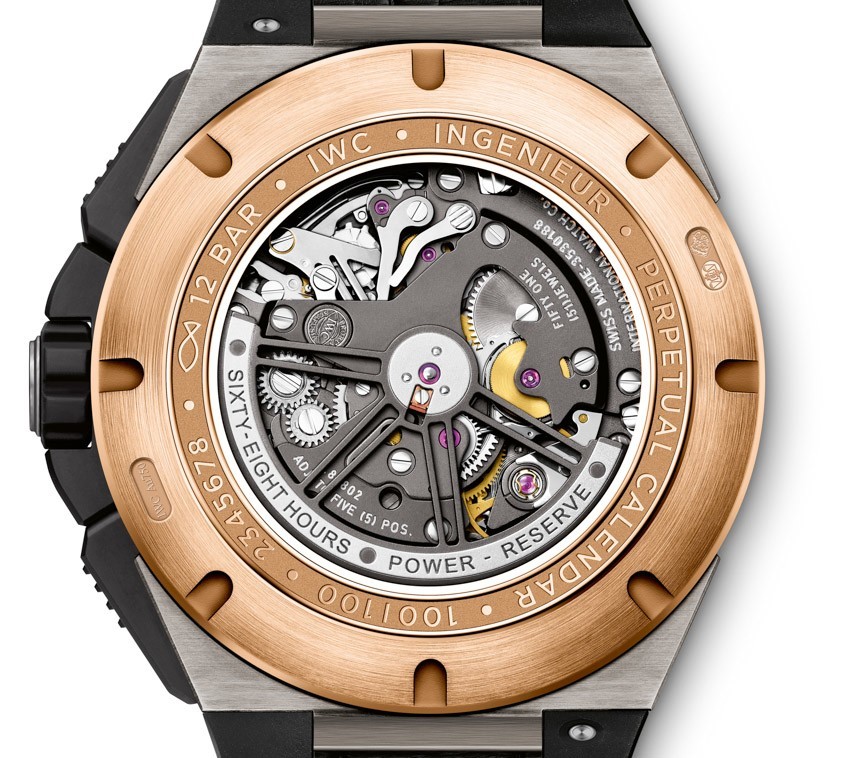 The dial is black with sapphire inlays that highlight some of the rotating discs, carrying the numerals for the digital displays that dominate the monochromatic – exclusively black and red gold – dial. A more discreet and yet quite impressive feature is that the hour and minute counters for the chronograph are both situated in the single sub-dial at 12.

The case back once again contains a sapphire crystal, showing off the in-house movement and the racing-car-alloy-inspired winding rotor proudly carrying the “Sixty-eight hours power reserve” designation. IWC being among the best when it comes to creating beautifully crafted – and strikingly cool looking – rotors to adorn its movements, this piece with the added text looks a bit “unusual” compared to the much more impressive rotors we have grown used to seeing on the Portuguese Annual Calendar or other limited editions such as this perpetual dedicated Saint-Exupéry’s The Little Prince. 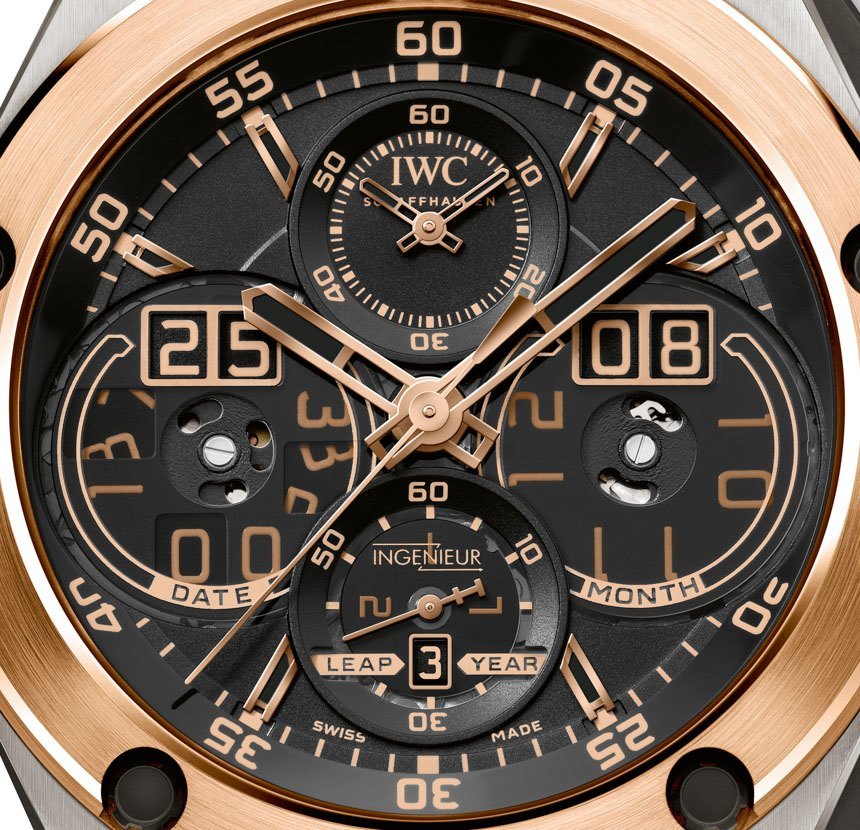