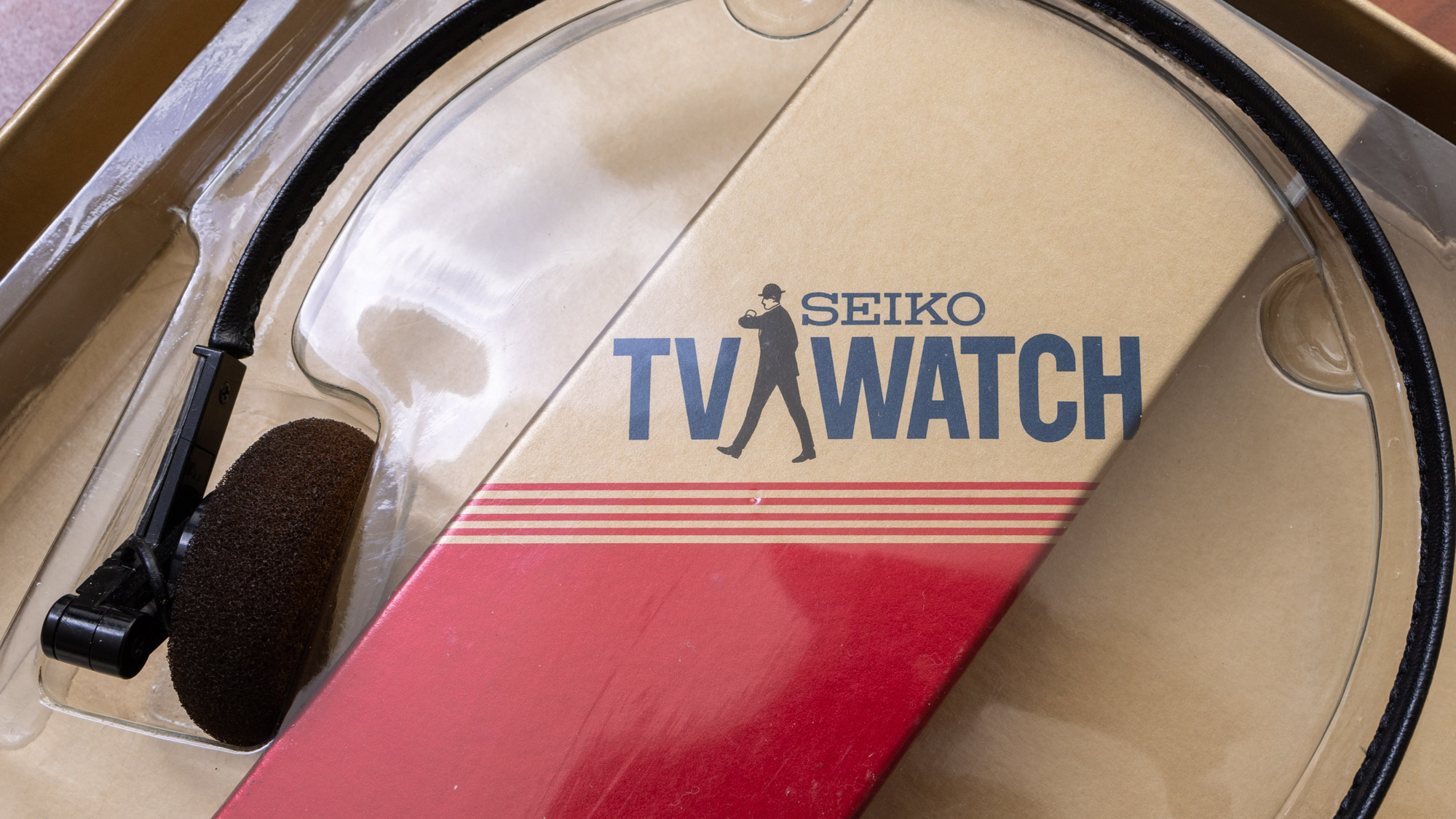 No Longer Made: Seiko TV Watch From 1982 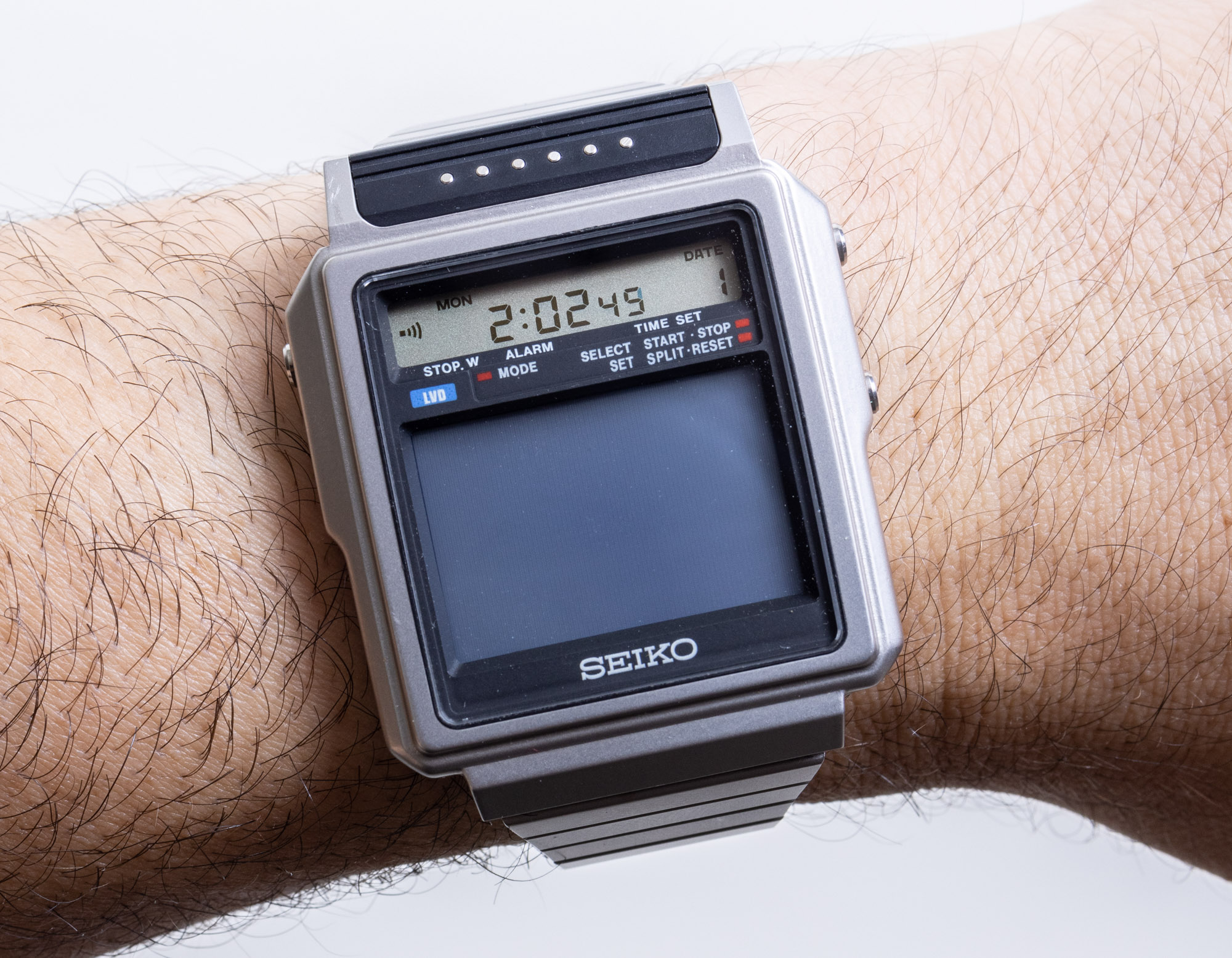 In 1982 (my birth year), Seiko watches in Japan introduced the world’s first wristwatch with a built-in liquid crystal display television screen. They called it the Seiko TV Watch, and today, I go hands-on with an original piece and the set of items that came with it. The Seiko TV Watch may have been just another oddity in the form of a wrist-worn gadget, but the device captured the public’s attention and was part of a larger fascination people still have with wrist gadgets. The wristwatch as a form of communication device really started much earlier with things like the Dick Tracy radio communication watch and continues today in the form of modern smartwatches. Starting in the late 1970s and moving into the 1980s, the wristwatch became an epicenter of consumer technological innovation. The cost of quartz-based movements had fallen steeply, ambitious technology companies in Japan were fervently trying to engineer “the next big thing,” and the Japanese were the kings of miniaturization at the time. So, why not try to put a television onto a wrist?

I first saw the Seiko TV Watch at the Seiko headquarters in Japan on display as part of the company’s personal museum collection. The watch is an incredible item because it didn’t have a clear consumer purpose when it was released. At the time the Japanese market was entirely OK trying to invest in new consumer needs and habits — so, why not assume that a lot of people traveling on public transportation might like to watch television on their wrist, similar to how they might listen to music or the news, all on their wrist. Looking back on this concept, I think it is easy to say that the people at Seiko were ahead of their time. Walk around in public today, and it is hard to not see at least some people watching video content on their smartphones. Seiko was absolutely correct that people wanted this, even if, to a large degree, they were ahead of their time. 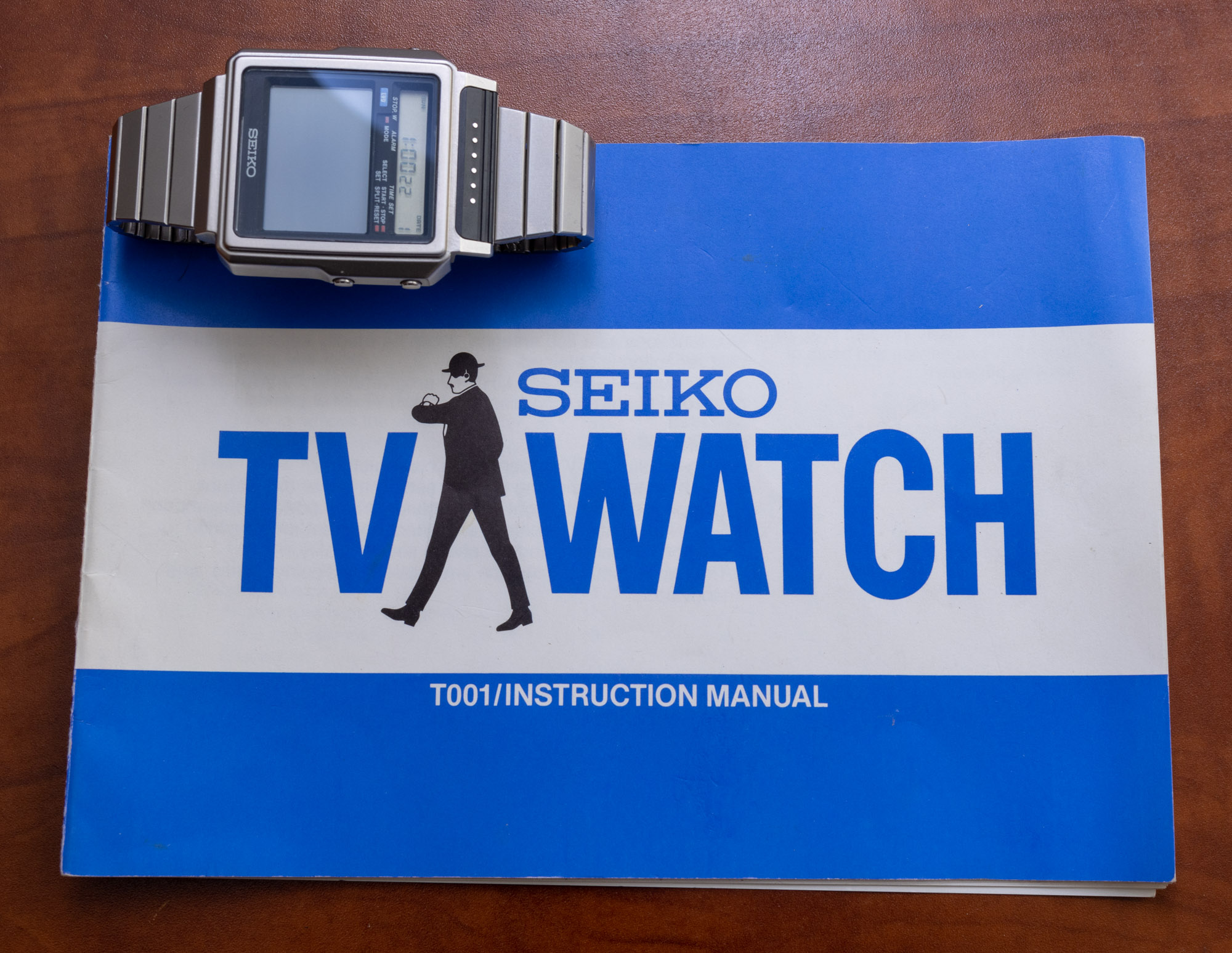 In 1983, Seiko got lucky because the Seiko TV Watch was more or less cast into a 007 James Bond movie scene. The relevant scene from “Octopussy” is in a YouTube clip below. Another video shows an actual Seiko television advertisement for the TV Watch that rides the James Bond wave and also focuses on technology products such as this being part of the utopian future people were hoping for. This was a really serious innovation for Seiko, and again, part of a larger trend of creating high-quality miniature electronics that, include as many features as possible in a small space. This is pretty much the definition of what watchmakers have been trying to do with the timepiece for centuries.

In 1984, the Seiko TV Watch officially came to America. The packaging refers to the watch as the reference RTOIA, but the correct reference number classification is the Seiko T001-5019. This is the most popular version of the Seiko TV Watch that was sold in America. It was only several years earlier that the LCD screen made its debut in a wristwatch (a Citizen, I believe), but technology rapidly progressed, and the experimentation Japanese firms engaged in was really incredible. I should also bring up the Casio TV Remote watch, which didn’t have a TV in it but rather contained a universal television remote. 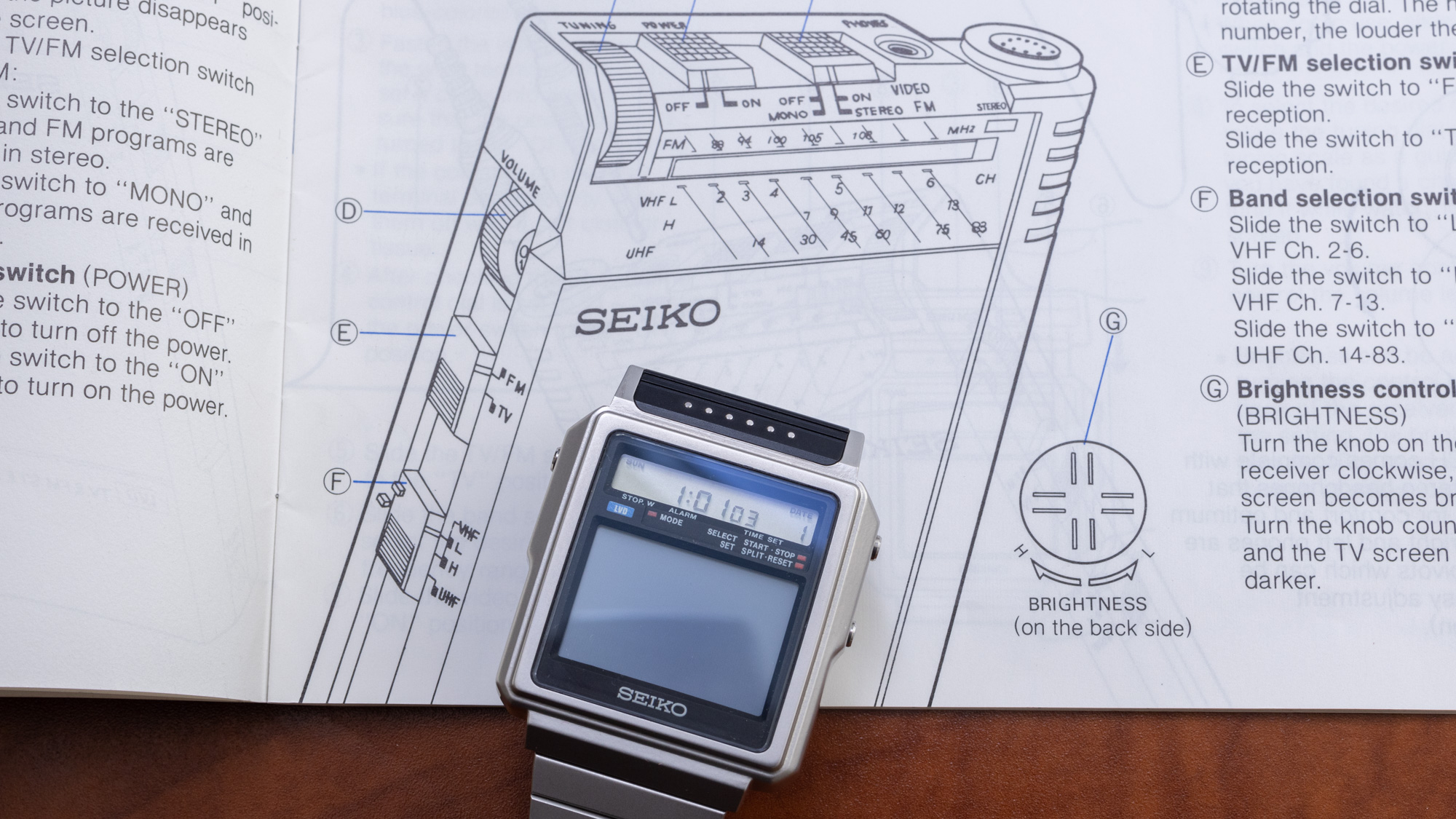 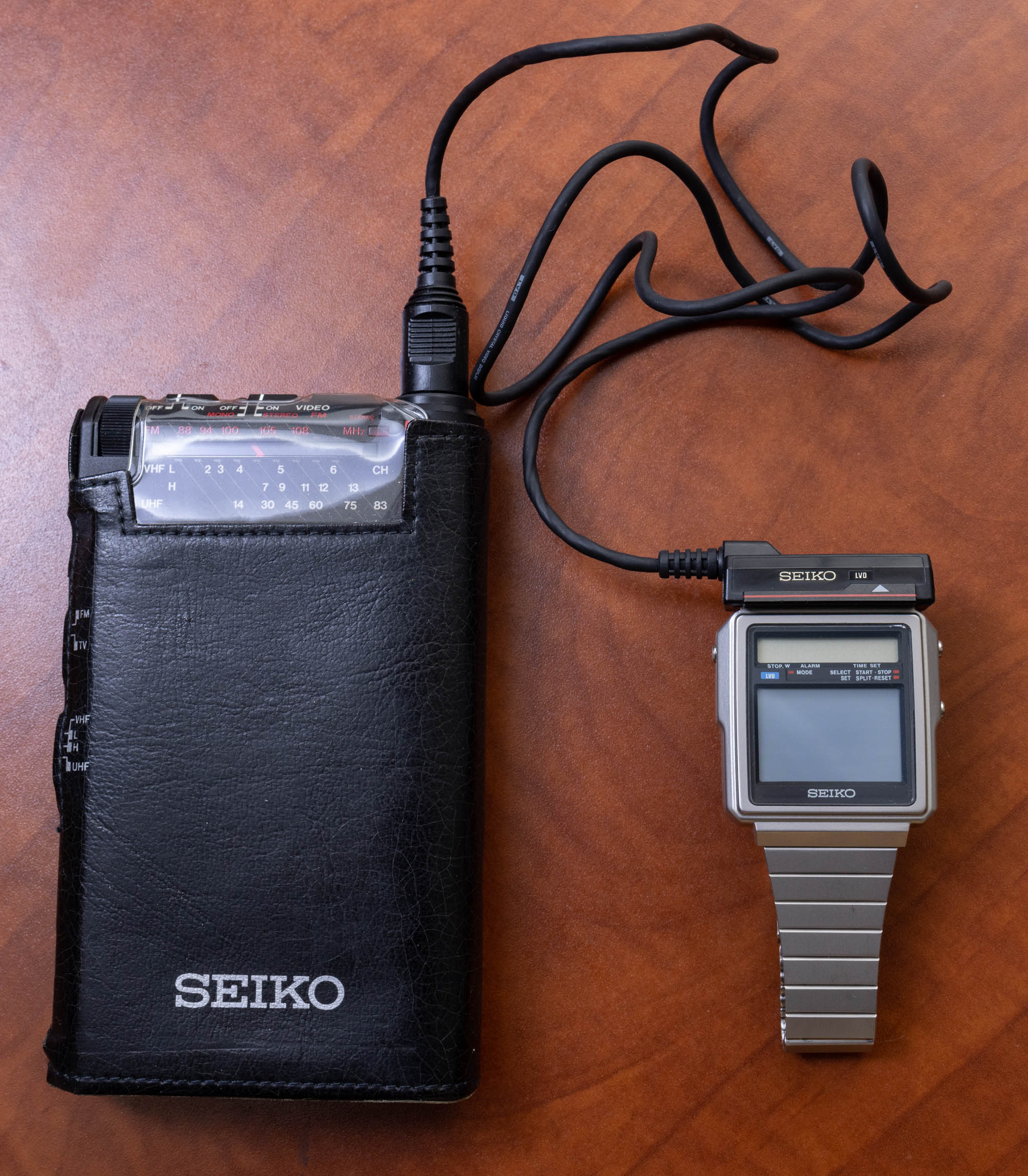 From an engineering perspective, the Seiko TV Watch is actually a very straightforward concept. The wristwatch combines a relatively small LCD screen for the time-indicating operations, and then a separate system for the television screen. These systems don’t seem to be entirely connected, which makes sense. Recognize that the watch did not include a television signal receiver, as that was part of the accessories you needed to also have on your body. More on that in a moment. The time-telling system itself included the time, stopwatch, alarm, and calendar. I really like how the instruction manual that came with the Seiko TV Watch demonstrates the effective documentation that once came with watches. These days no one seems to write effective instruction manuals, though I have to say that the Japanese still do it worlds better than the Europeans.

To get the TV part of the TV watch to work, you first needed to attach the six-pin connector to the top of the watch case, which itself is attached to the Walkman-style receiver unit (that has a nice leather case with a belt loop!). The receiver was either powered by two AA batteries or an AC adapter, which offered a lot more than the roughly five hours of promised television viewing time. The receiver was able to pick up both VHF and UHF television signal frequencies, as well as an FM band radio receiver (because why not?). The device includes a pair of Seiko-branded headphones (which seems very cool for a Seiko nerd like me), the cable of which acted as the signal antenna. Provided that you had the headphones on, the receiver pack all set up, and the watch attached to it, you could watch UHF and VHF band television programming signals right on your wrist! 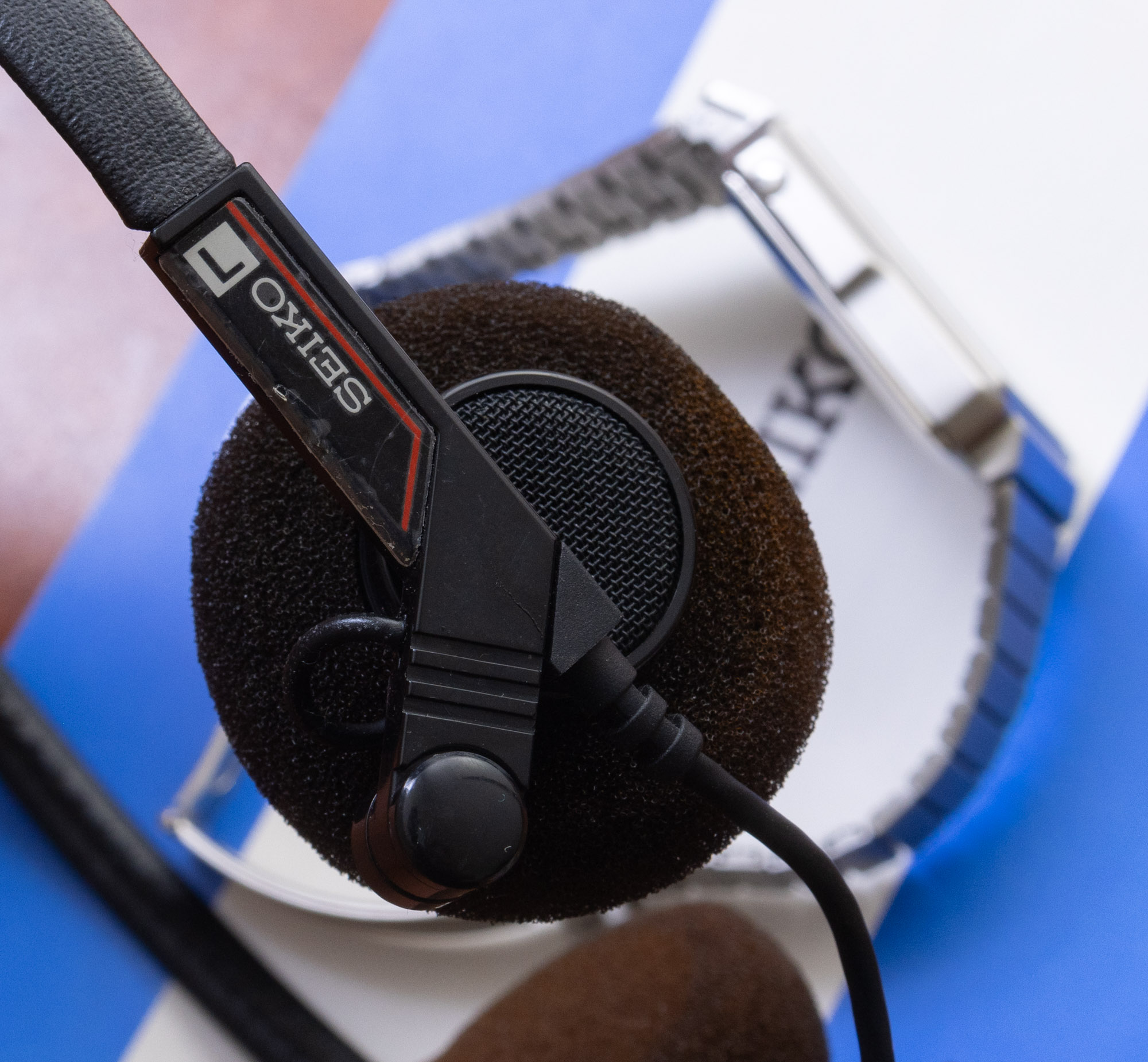 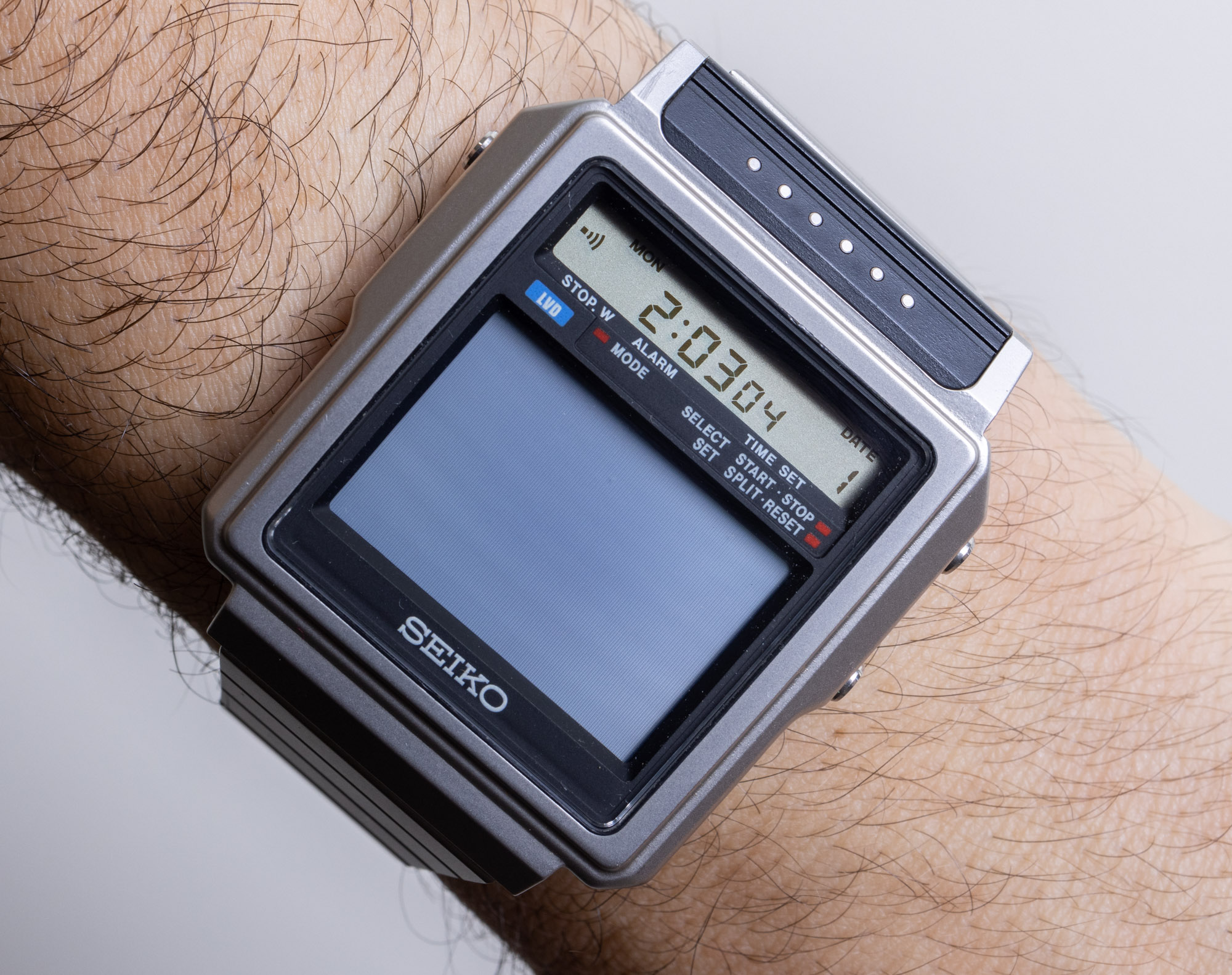 Seiko’s graphics for the TV Watch show a man in a bowler’s hat wearing the Seiko TV Watch. I just keep wondering if he is wearing the headphones underneath the hat? In the instruction manual, there is a more accurate illustration of someone wearing an 80’s style suit wearing all the TV Watch with the full regalia. It has been recommended that I do so for Halloween one year. Should I?

Unfortunately, there is no easy way to actually watch television on the Seiko TV Watch in 2022. This is because (at least in the United States and most other developed countries) there are no longer analog television signals being broadcast. In order to make more efficient use of the available signal band frequency range, digital versus analog signals were mandated a number of years back. That means that even though you can try to turn on the receiver unit for the Seiko TV Watch, there are simply no relevant signals for it to interpret. I theorized that there might be some device that takes digital TV signals and converts them into analog signals, but finding and using such a device merely for the thrill of getting a small television screen on your wrist, to do what an Apple Watch can probably already do, is probably rather silly. 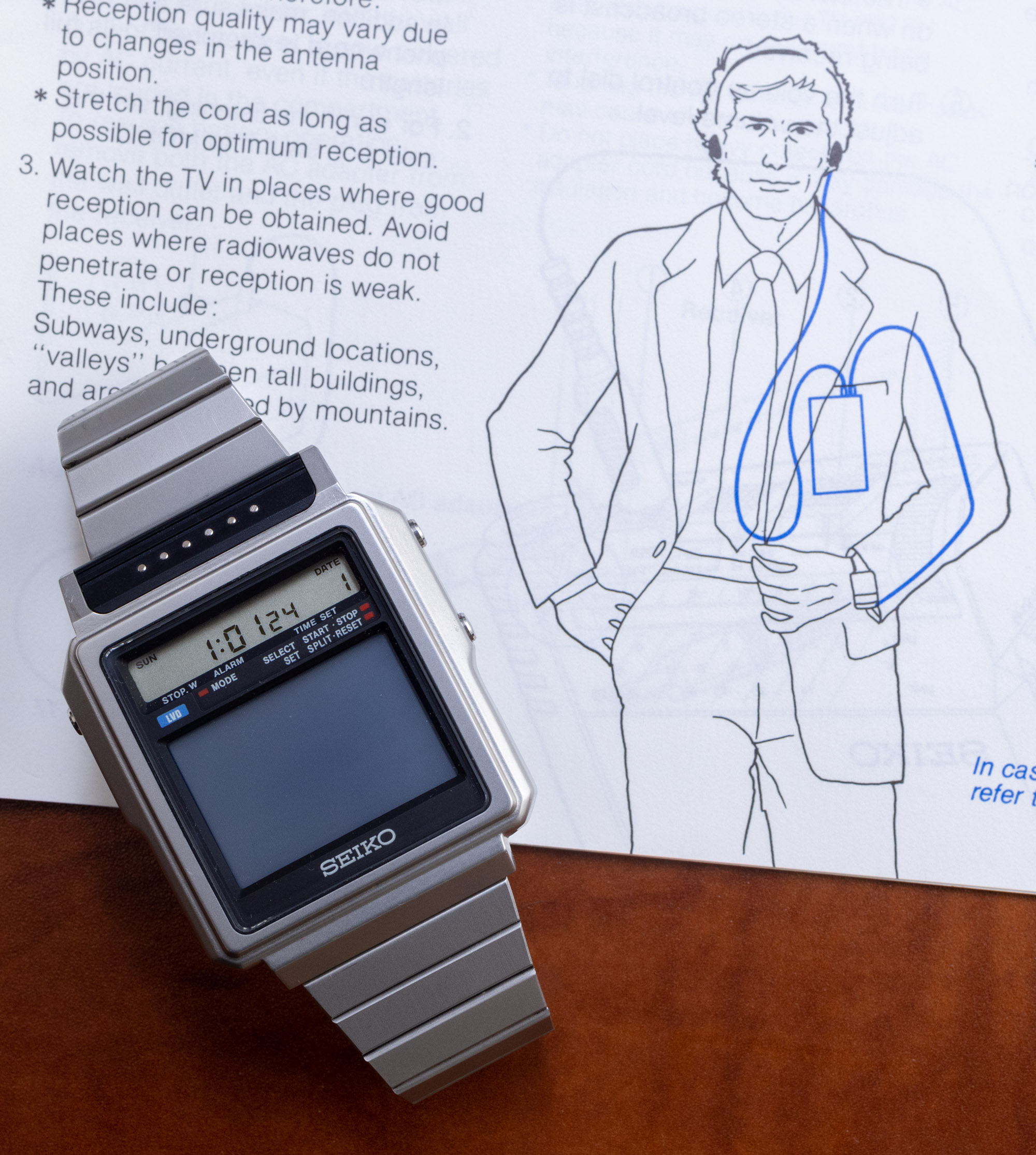 Style-wise, the Seiko TV Watch is very much a product of its era. The matte-finished steel case was paired with a single-link tapering steel bracelet with an actual locking deployant clasp. It is a lot of stamped metal, but at least it is a good example of stamped metal. For the most part, the product has aged well, but Seiko and other Japanese quartz watchmakers have come a very long way. This is especially when it comes to the efficiency of internal modules. There are also, no doubt, issues that occur over time as things like plastics and electronic insulators begin to deteriorate. That’s sort of the sad thing about a lot of old electronic gadgets — they don’t necessarily age as well as all-metal items and other gadgets. Finally, a plug to eBay where this Seiko TV Watch was purchased. eBay really is among the few platforms available where historic electronic watches like this can be readily found, even if examples in good condition such as this are rare. The original retail price of the Seiko TV Watch reference T001-5019 in the United States circa 1984 was $495 USD.