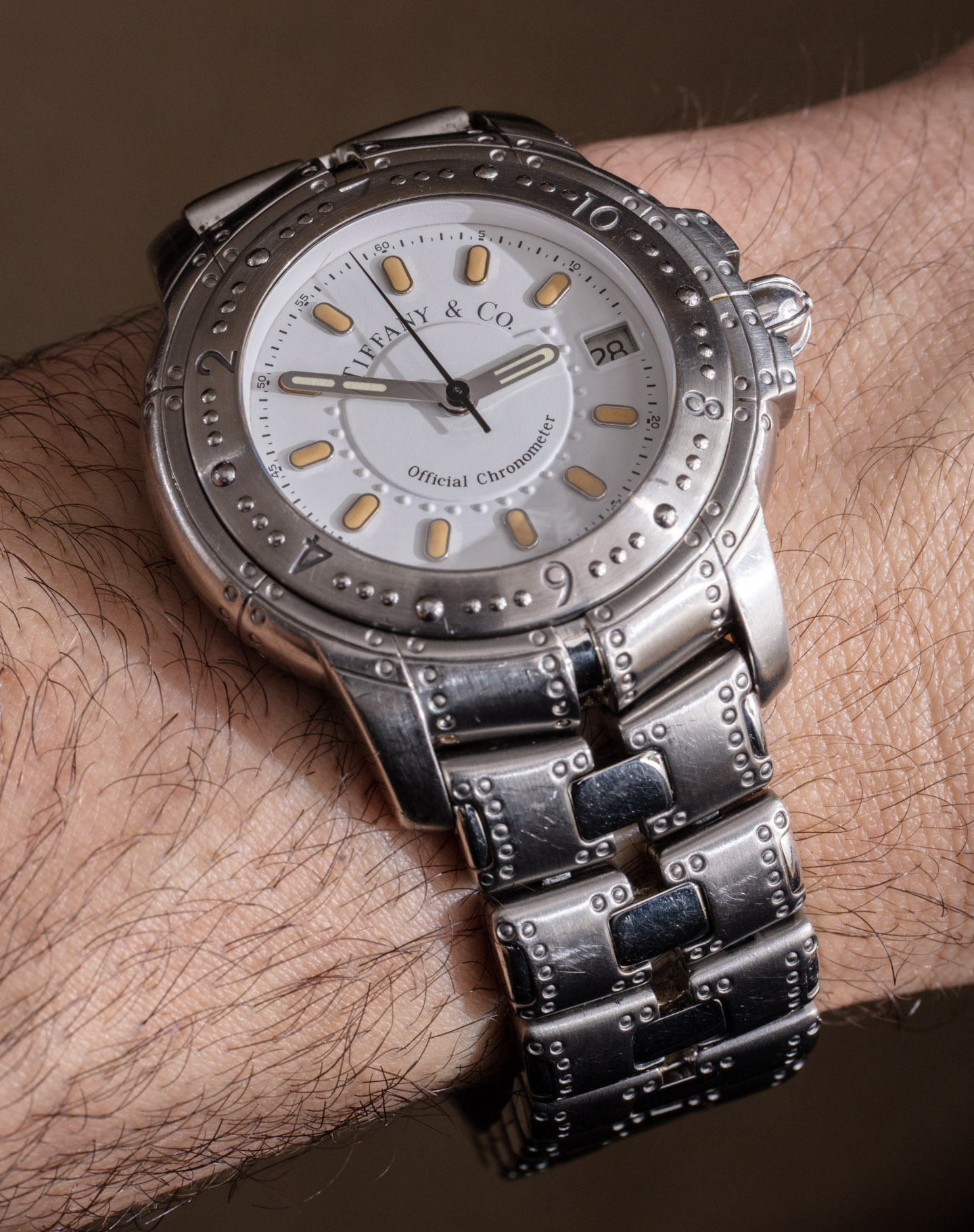 The below advertisement is a page I scanned from a magazine that was published in 1994. It is a rare ad for the then-new Tiffany & Co. Streamerica watch collection. I first learned about the Streamerica models nearly a decade later and was immediately captivated by the surprisingly distinctive watch from the current American luxury watch brands, which had always been an interesting player in the wristwatch space.

I first wrote about the Tiffany & Co. Streamerica watch very soon after starting aBlogtoWatch in late 2007, though it would be somewhat longer until I actually acquired one for myself. The Streamerica collection came in two movement styles, with a black or white dial, and on a bracelet or a strap. Getting the bracelet was important to me, but I was happy to opt for the simple time-with-date version as opposed to the slightly more complicated world time model (which includes a GMT disc as well as a reference city name list that could be changed with the push of a button located at the 2 o’clock position on the case. 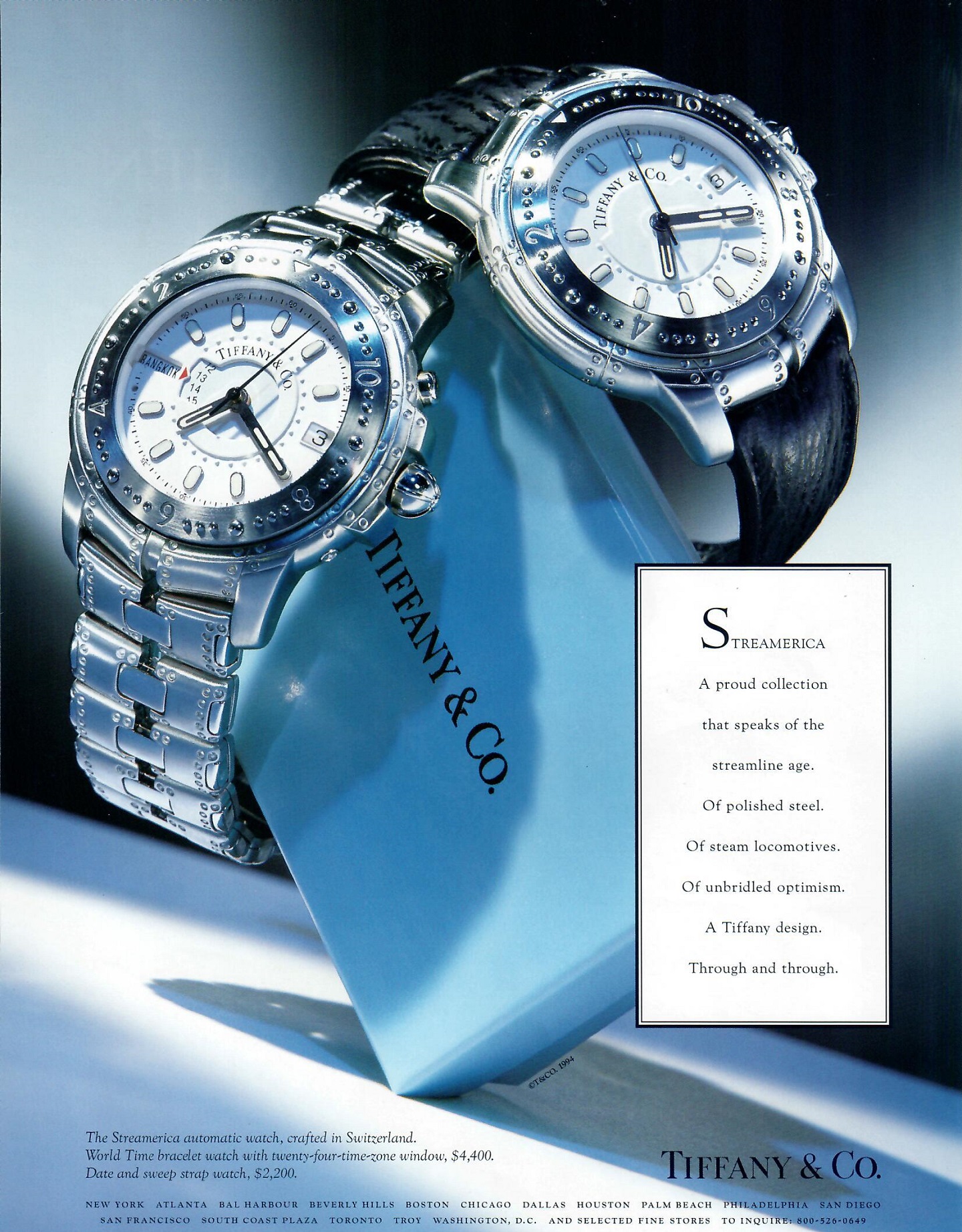 What got me even more interested in the Streamerica collection was the fact that it was designed for Tiffany & Co. by the Swiss watch designer Jorg Hysek. Hysek went on to eventually start his own brand, which was later sold and is now just known as Hysek. I consider Jorg Hysek to be among the most preeminent contemporary watch designers who had a traditional design education.

Hysek did a lot of things with the Streamerica collection that you’d never seen in a Tiffany & Co. wristwatch before, but he had two interesting parameters to work within. First was the fact that Streamerica wasn’t just a watch collection but a larger men’s and women’s jewelry and accessory collection from Tiffany & Co. that was intended to celebrate the history of American industrialism. The entire point of the watch was to have a case and bracelet seemingly lined with rivets. 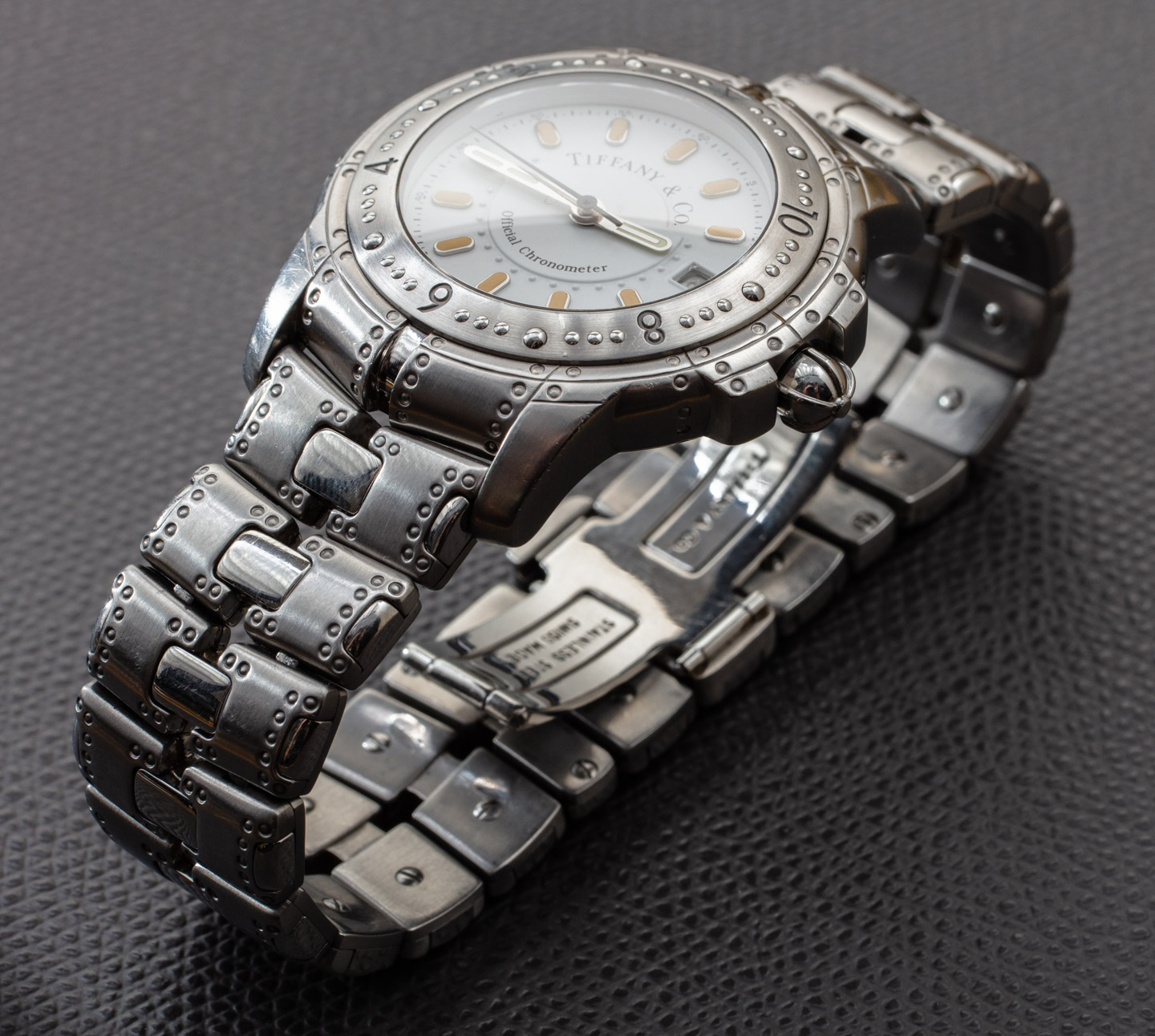 Rivets were, for a long time, considered a very conspicuous sign of contemporary industrialization as the fastening technique was (and still is) heavily applied to the world of trains, planes, boats, and an number of other “big and powerful machines.” Second, the bracelet of the Streamerica watch is original to Tiffany & Co. but not unique to the Streamerica — fully, that is. You can also find this interesting bracelet design on the Tiffany & Co. Tesoro collection, though arguably, the Streamerica made for a better men’s watch.

The bracelet is unlike anything I’ve seen before given the design of the steel links, as well as how they fit together. To me, the bracelet (even without rivets) looks like something between a chain and tank tread. The bracelet has an interesting deployant that combines a butterfly-style clasp with a snap-locking hinge. The meticulous design of the brushed and polished surface, along with the “rivets” across the bracelet and case, make for a look and feel that I still think is unparalleled out there. 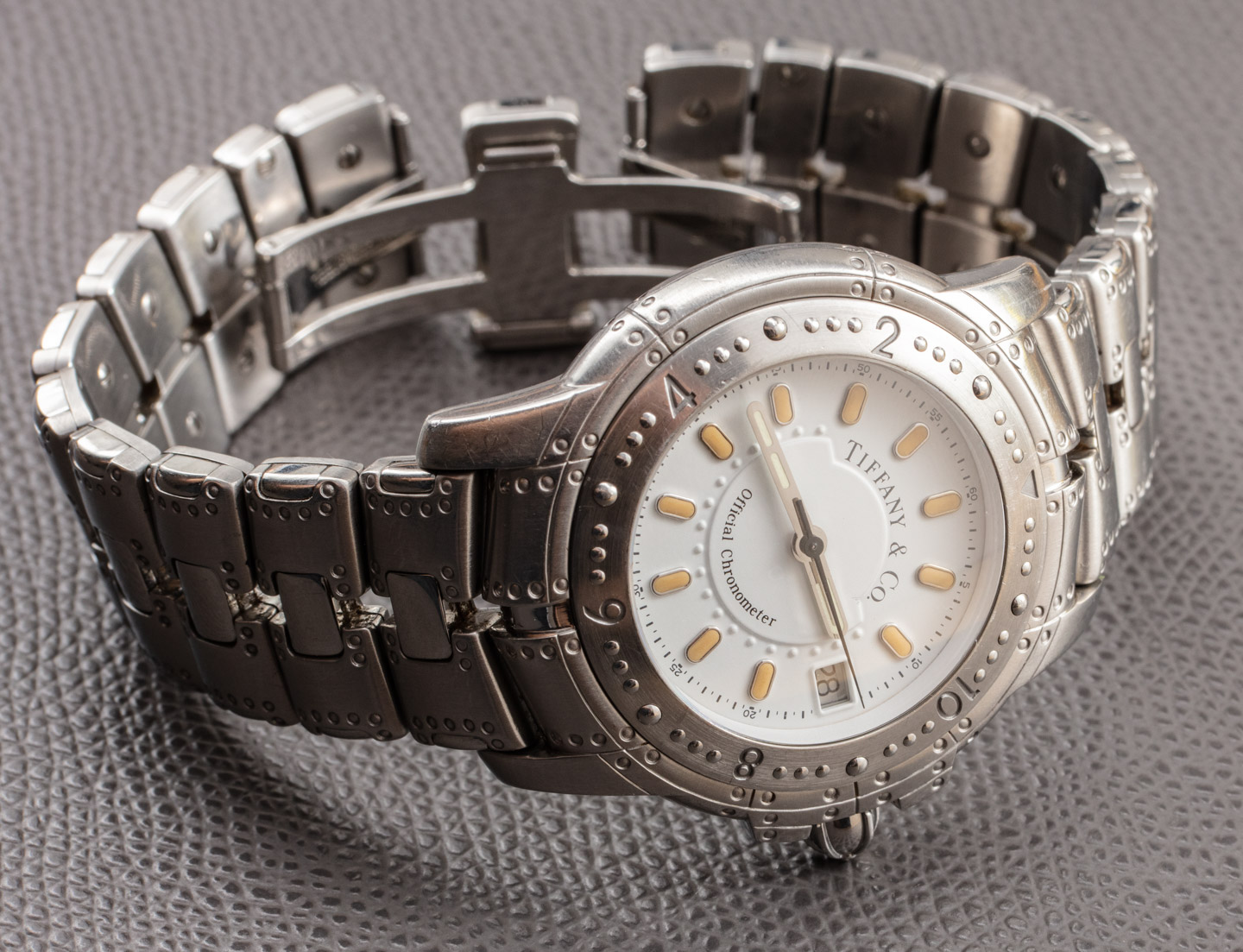 The case diameter is 39mm-wide with a 46mm lug-to-lug distance and about 12mm of thickness. Water resistance was probably 50-100 meters, and the crown (which has a very cool design, in my opinion) was screwed down. Over the dial was a domed sapphire crystal, and the bezel actually did turn.

Speaking of the bezel — it is probably among the weirder parts of the watch. First of all, it isn’t particularly easy to grab and turn with your fingers. Its uni-directional rotating action would also be considered a bit crude, by today’s standards. Design-wise, the steel-on-steel bezel is attractive, and the interesting part of the bezel is that it has a 12-hour countdown timer given that the numerals go in reserve. I’m not sure that I can think of a single other watch out there that has this particular bezel feature. It is, at the least, highly uncommon. 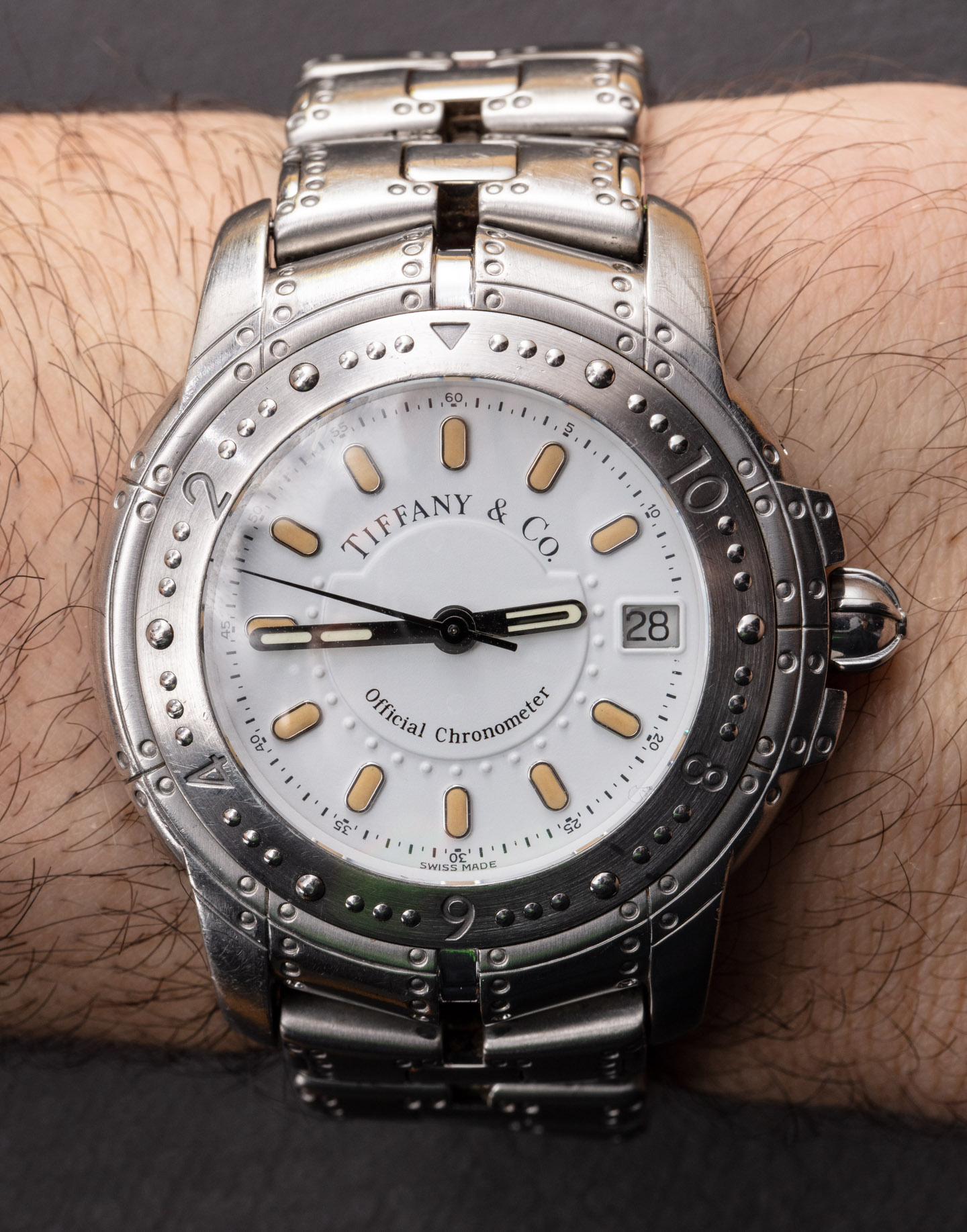 When I first got into the Streamerica watch, it was always a piece I was concerned about ever wearing one day because I was concerned it would be too small. Years later, popular watch tastes seemed to re-embrace smaller diameter cases, which means that the 39mm-wide Streamerica size doesn’t feel as dated in 2021 as it did in 2007 (ironically, of course).

Another thing I always admired about the Streamerica was the design of the dial’s hands and hour markers — especially the design of the lume paint channels in the former. Given the time period, it was not as weird to have mismatched luminant colors on the hands and hour markers, but these days, it is something that a brand like Tiffany & Co. would probably not repeat. 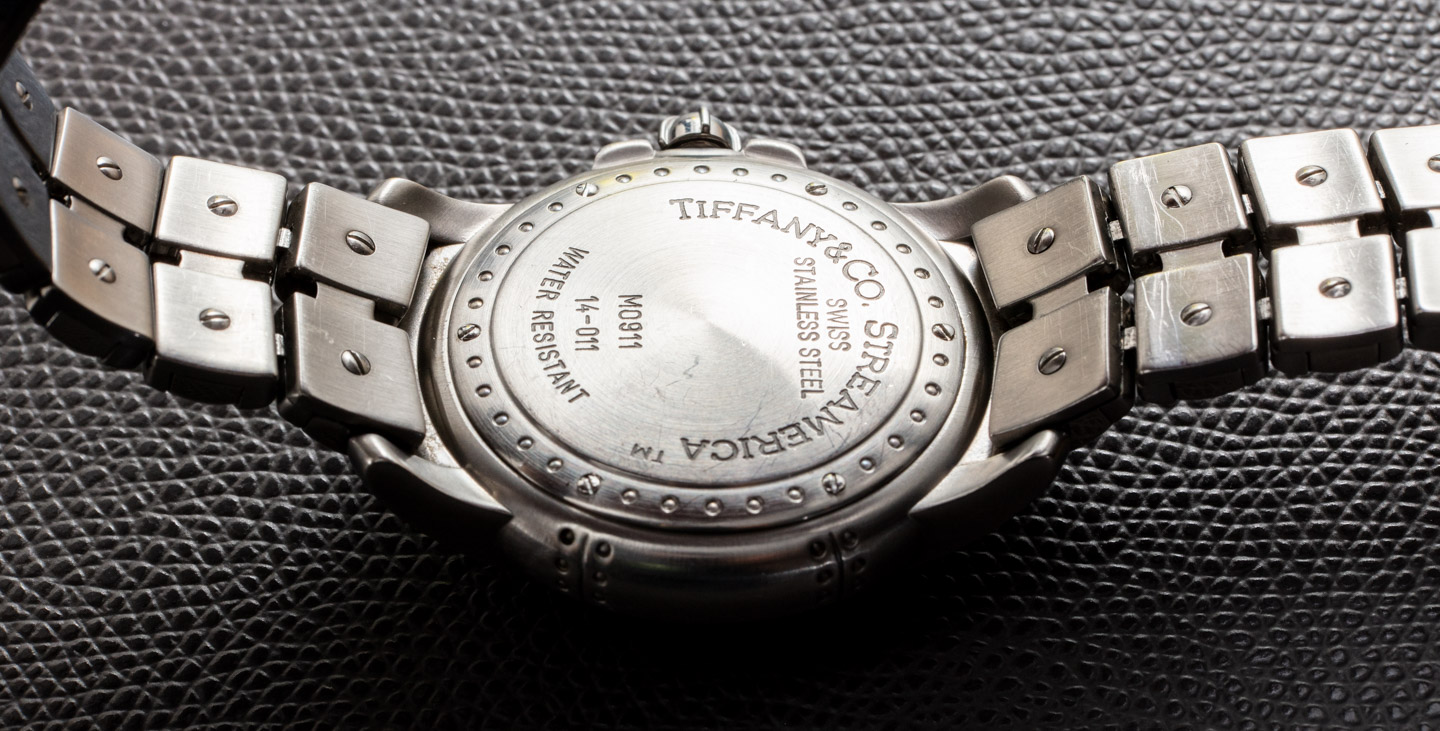 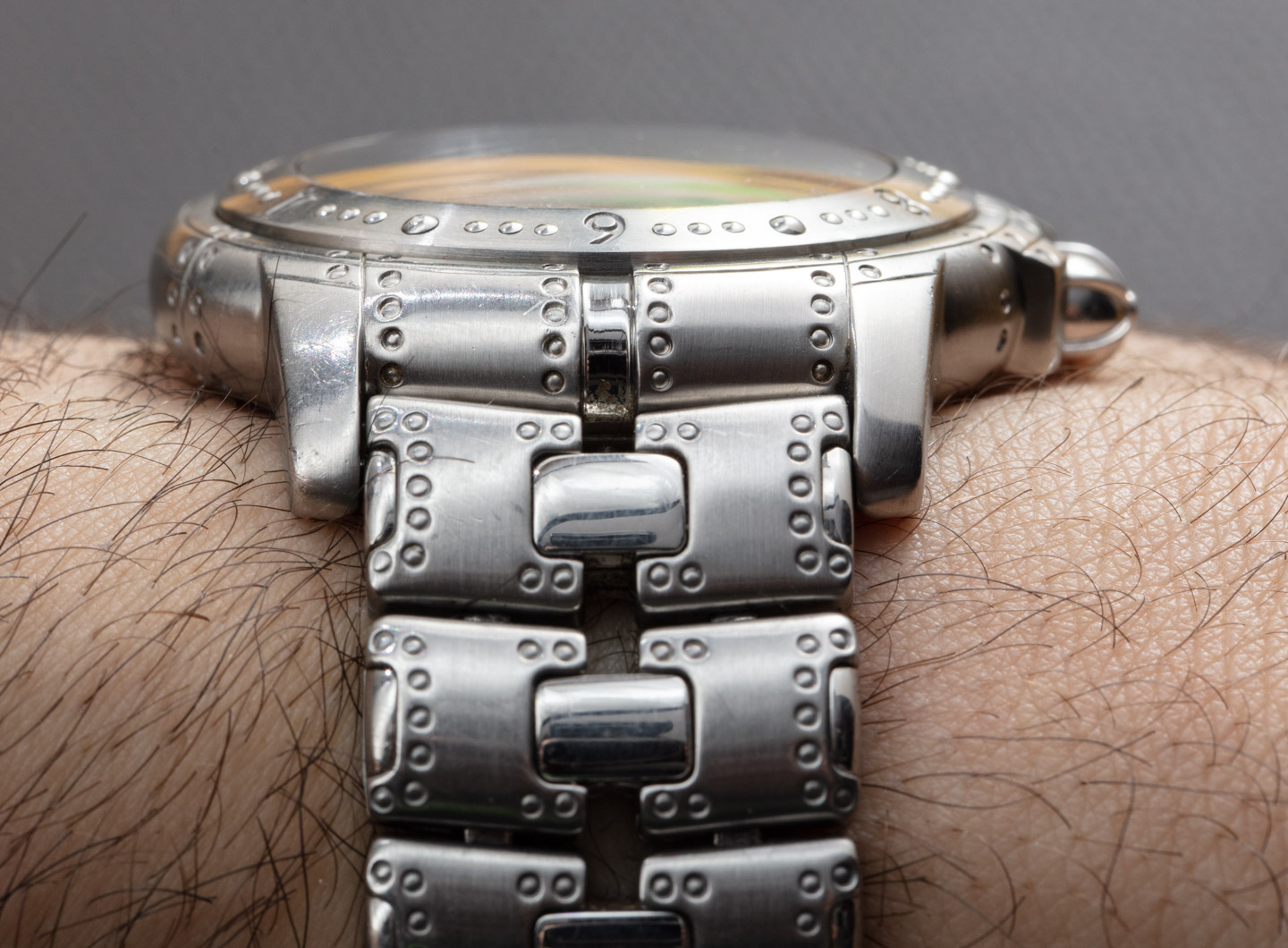 Inside the watch is a Swiss Made automatic movement that is probably the ETA 2892. The automatic movement has been COSC Chronometer-certified, which Tiffany & Co. did a lot with some of its more interesting men’s watch in the 1990s. At the time, Tiffany & Co. was a big Rolex watch retailer — and Rolex watches taught retailers the power of telling consumers right on the dial that their wristwatch was a Chronometer. So, Tiffany & Co.’s take on this was simply to write “Official Chronometer” on the Streamerica dial (as opposed to Rolex’s “Superlative Chronometer Officially Certified.” That was a very American form of marketing mimicry that compliments the original speaker as much as it borrows from it.

The big news for Tiffany & Co., in 2021, is that the brand has finally been acquired by the LVMH luxury group. That ended its legacy as an American-owned luxury firm, but it allows for Tiffany & Co. to take on new life under the tutelage of the biggest luxury group in the world — which also owns the watchmakers TAG Heuer, Hublot, Zenith, BVLGARI, and others. It will be very interesting to see if or when the Tiffany & Co. of tomorrow rediscovers the Streamerica collection for a new generation. I find the concept quite handsome and the luxury-meets-industrial design concept to be a viable one (it works pretty well for Cartier doesn’t it?). 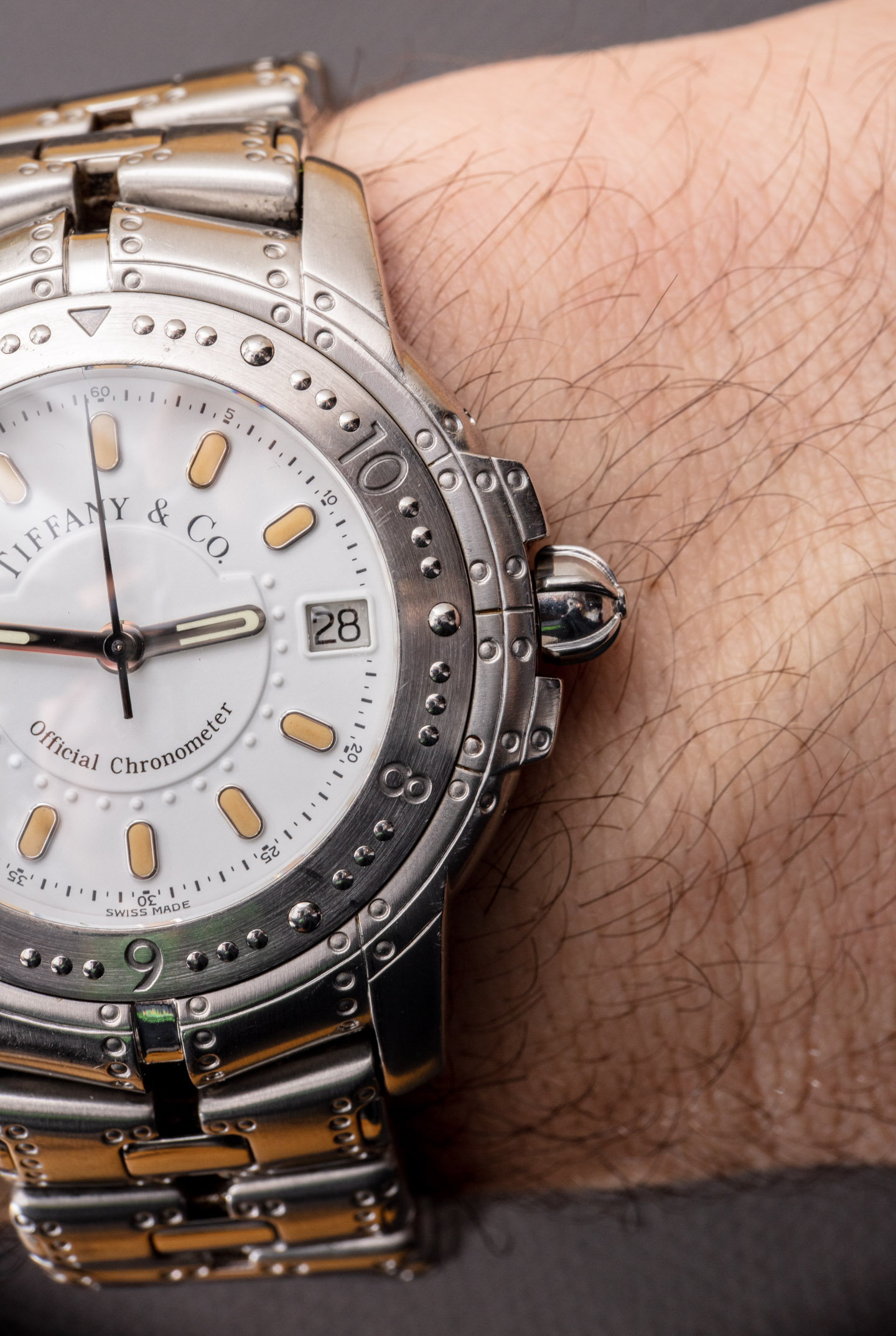 Tiffany & Co. Streamerica watches were also not particularly cheap. Luckily, original retail pricing was in the advertisement from 1994, so we can see that the version of this watch on a strap had a retail price of $2,200 and the Streamerica World Time on the bracelet cost $4,400. Let’s assume this model was priced somewhere in the middle around $3,000 – 3,200 in 1994 dollars. Adjusting for inflation, that is about $5,500 USD today.

What I most like about the Streamerica — in addition to the fact that I personally know the design and have been collecting other Tiffany & Co. watches for some years — is that the design remains as competent as it is controversial after all these years. It still wears comfortably on the wrist and does a fine job of being a timepiece, but it is also immediately expressive and shuns conservatism in the most polite of manners. Rivet on…