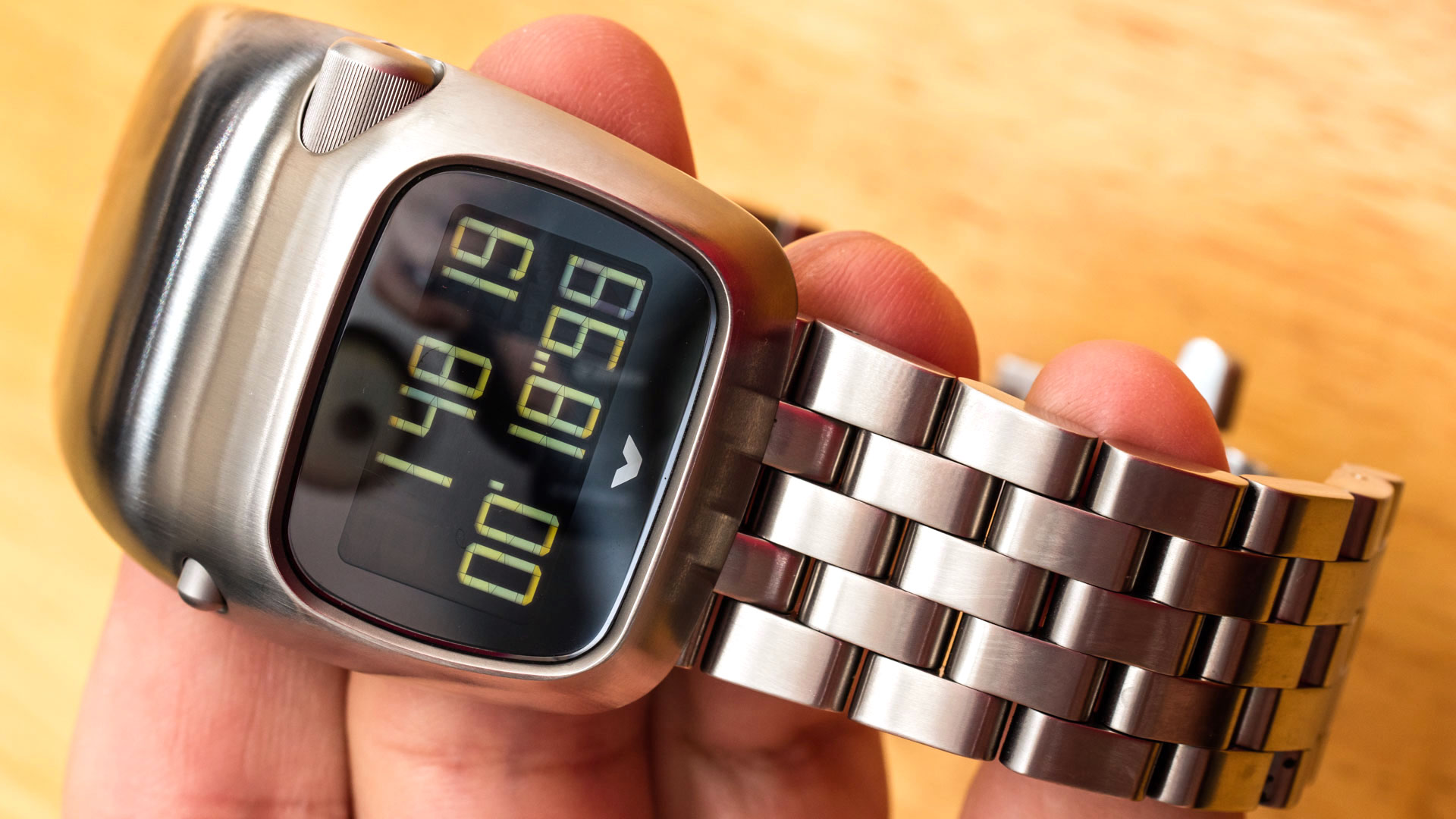 The 2008 film Bangkok Dangerous is a relatively forgettable Nicolas Cage action story that just happened to also prominently feature this Ventura V-Tec Sigma wrist watch. Cage’s assassin character not only wears the V-Tec Sigma but also seemed to carry an extra piece to give to his assassin assistant. It’s actually impressive how much wrist time the Ventura V-Tec Sigma received in the movie – watch lovers might even watch the movie to see how much screen time this interesting high-end digital watch received.

Swiss Ventura watches is a no-longer-in-production brand even though some skeletal element of it appears to still be online via its website. Some of their watches are even still available for sale. The brand was the brain child of Mr. Pierre Nobs and was perhaps distinctive for clearly acknowledging the design of the watch on the timepiece itself. Ventura watches were primarily designed by industrial designers Hannes Wettstein as well as Paolo Fancelli. This V-Tec Sigma was designed by the latter – a fact which is indicated via a plaque on the back of the case. How many other Swiss watches have done that? The answer is “not enough.” 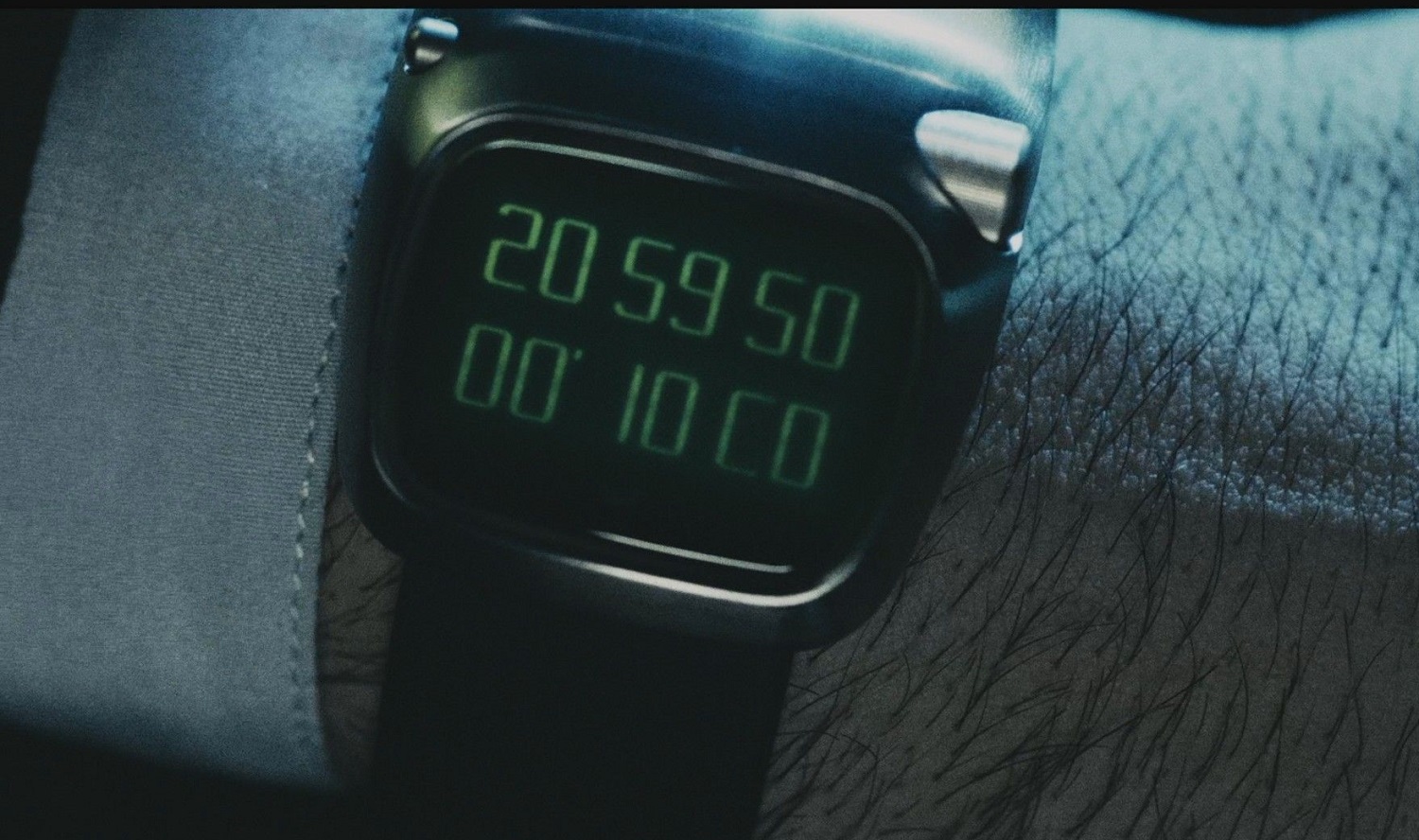 Ventura was cool not only because of their focus on modern design, but because they produced but mechanical and quartz watches – with the latter being clearly distinctive. They remain some of the “last” futuristic high-end digital watches of their era and I think it is only a matter of time before more collectors find interest in them. In addition to having a novel user interface for the screen via the EasySkroll operating system as well as a spirited design, the case was designed to be highly durable being produced in scratch-resistance Durinox steel. 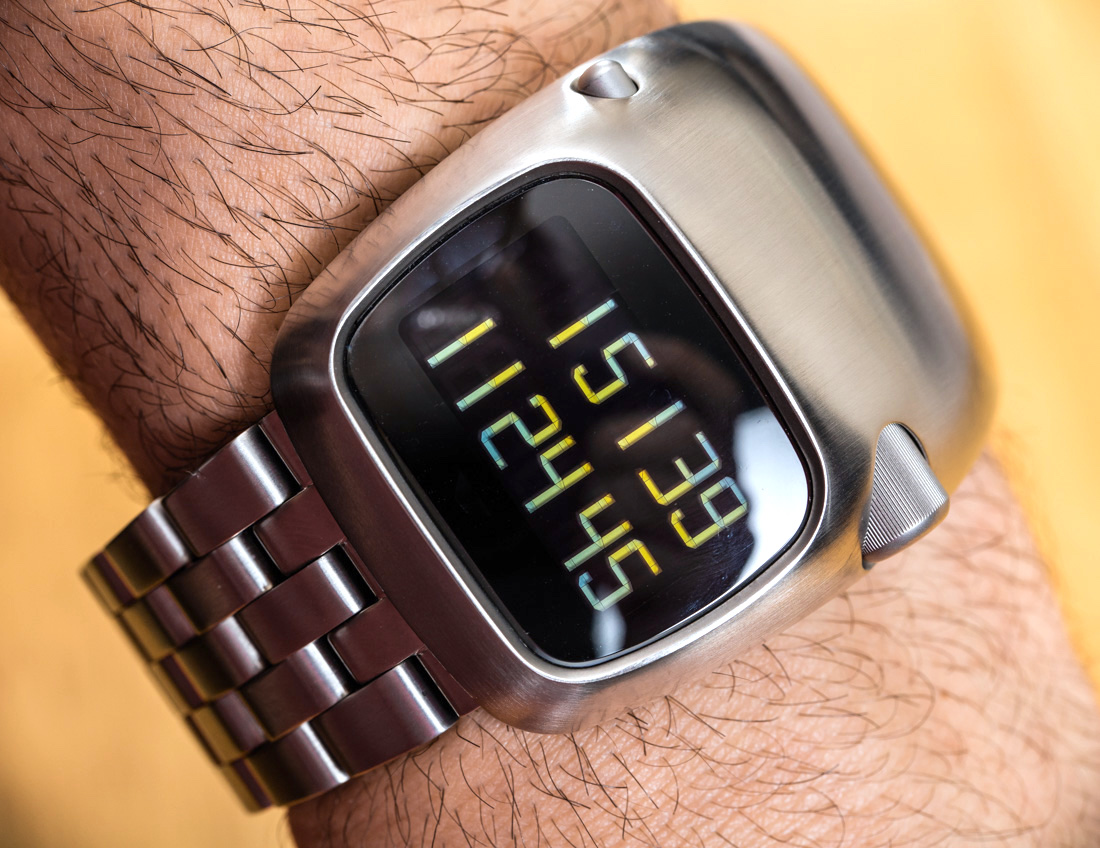 High-end quartz watches have had a tough time historically though I have a feeling they will return with a vengeance in the future when “dumb” (non-connected) electronic watches will make a nostalgic comeback. Right now mechanical watches still steal the show for most collectors. Ventura wasn’t exactly ahead of its time, but it was trying to compete with far too many timepiece options at a time when the industry was starting to appreciate that it has no idea how to market and distribute watches in the 21st century. Finding the right buyers was also the biggest challenge for a “design-focused” brand like Ventura that wasn’t about selling image, but rather the art and novelty of these interesting watches. 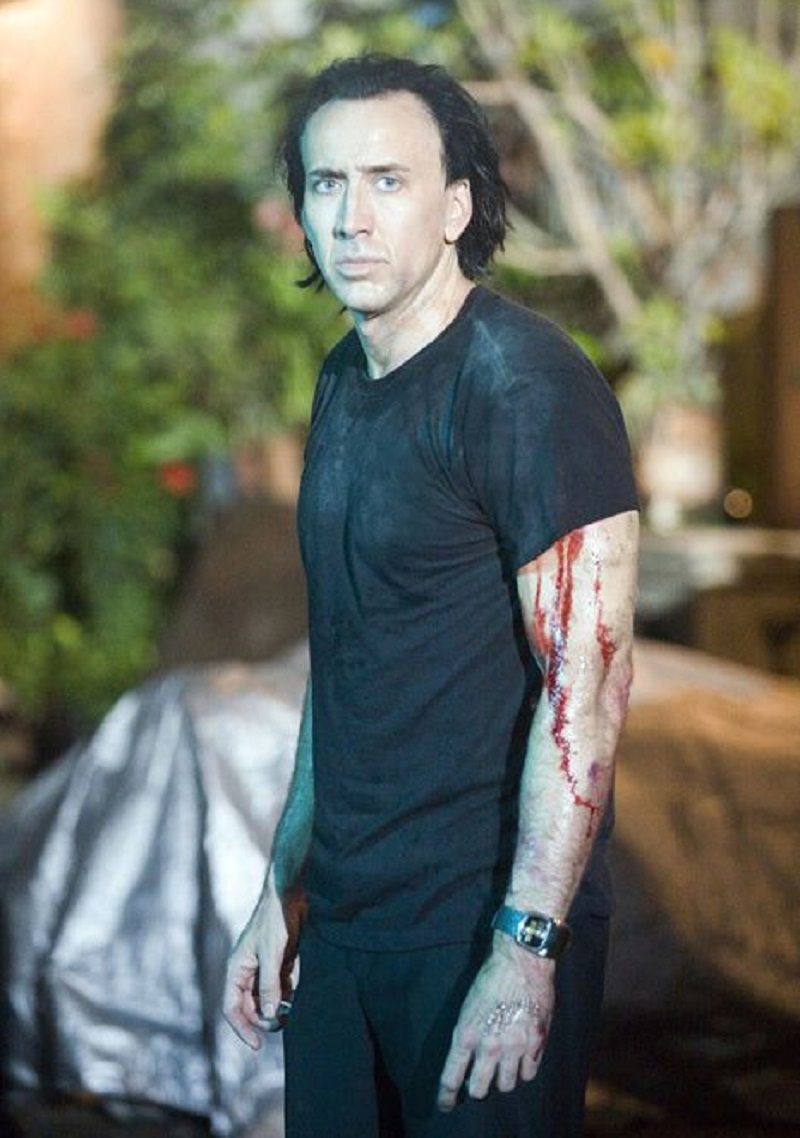 The Ventura V-Tec Sigma W25 (here the  W 25 S) isn’t the final V-Tec watches to be produced as the final models incorporated an automatic rotor which generated electricity for the movement (very similar to the Seiko Kinetic system). Those latter models features a large window for the rotor which was placed on the broad top-side of the watch case in the Ventura Sparc Sigma MGS W 71 models. Not everyone is into that large hole for the rotor and the W25 models are arguably a bit more handsome from a design perspective. The Sparc Sigma MGS models of course do benefit from not ever requiring a battery change as the battery is recharged by the electricity generated from the rotor. 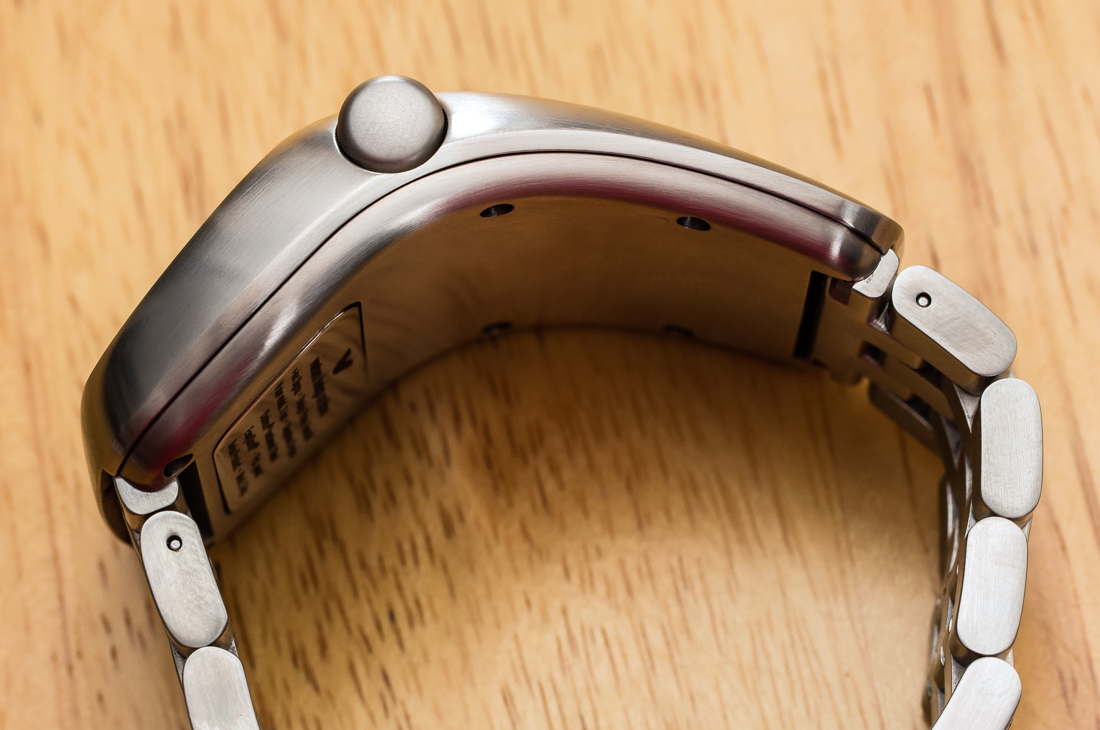 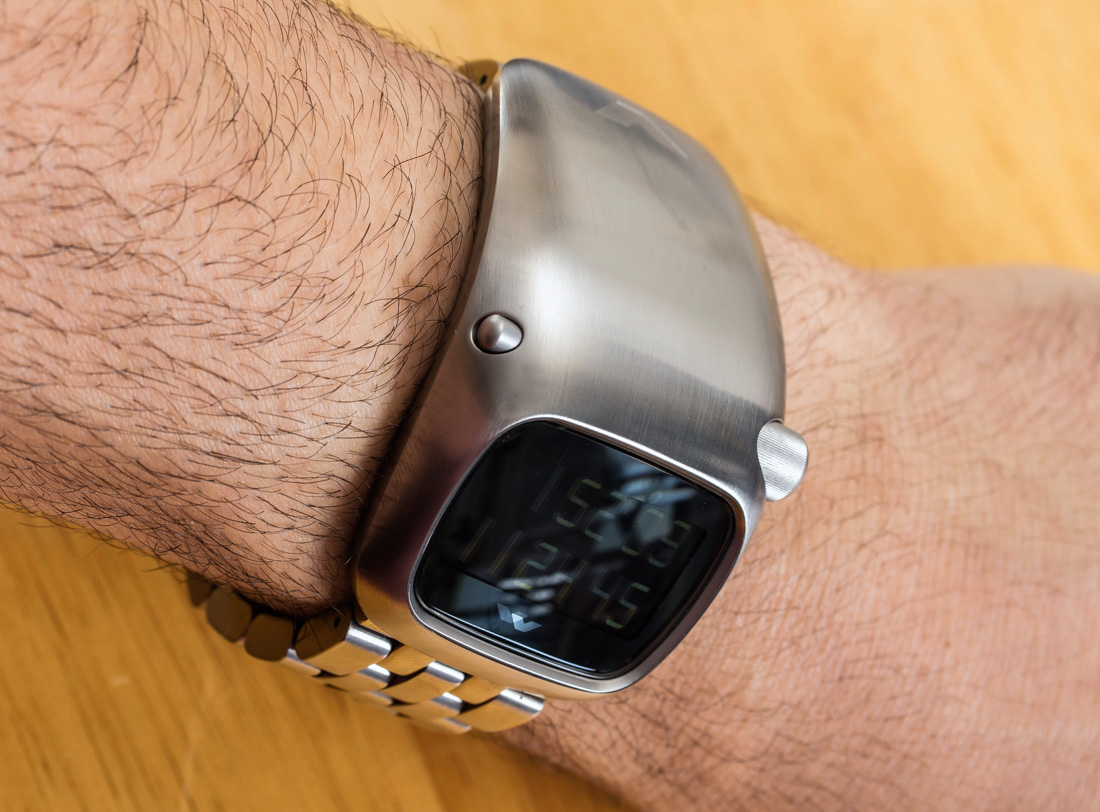 Coming back to the V-Tec Sigma W25, the most noteworthy element of the watch isn’t the digital screen but rather the unique, boomerang shape of the case. With sooth lines the design of the Sigma is supposed to fig well on your wrist while angling the screen to you so that you can read it off your wrist easily. Seen on others the Sigma is a bit odd from a fashion perspective, but still quite cool in my opinion. The case is water resistant to 30 meters being 39.50mm wide and 60mm long. 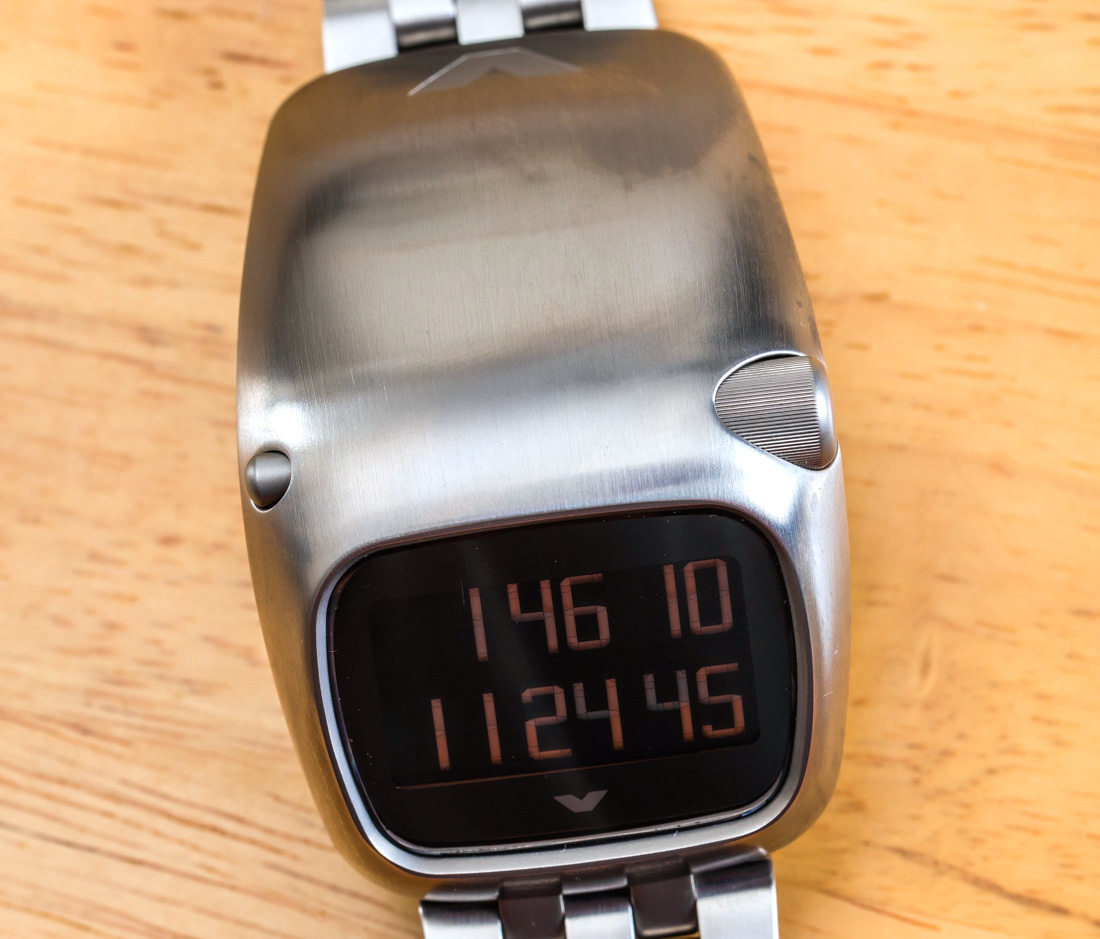 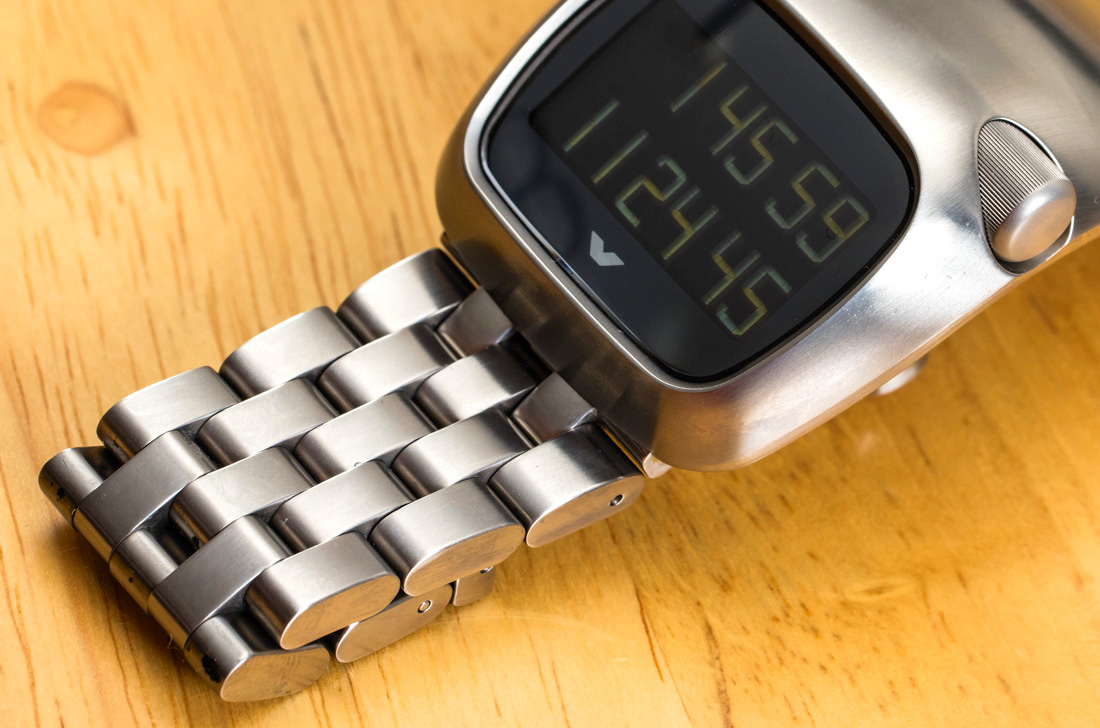 The case is in Durinox, which is said to be a highly scratch-resistant steel. The crystal is sapphire though I think this is one of the biggest weakness of the watch – more on that later. The W25S model came on a five-link bracelet which is also produced from Durinox. The other versions of the V-Tec Sigma W25 came on rubber straps of various colors (black, orange, and red). The bracelet is nice with a chunky feel to it and folding butterfly-style deployant. With that said the links are a bit on the thick side and I’m not sure the bracelet design feels as innovative or futuristic as the case. As you can see on the later Ventura Sparc Sigma MGS, Paolo Fancelli designed a different bracelet option to go with it. 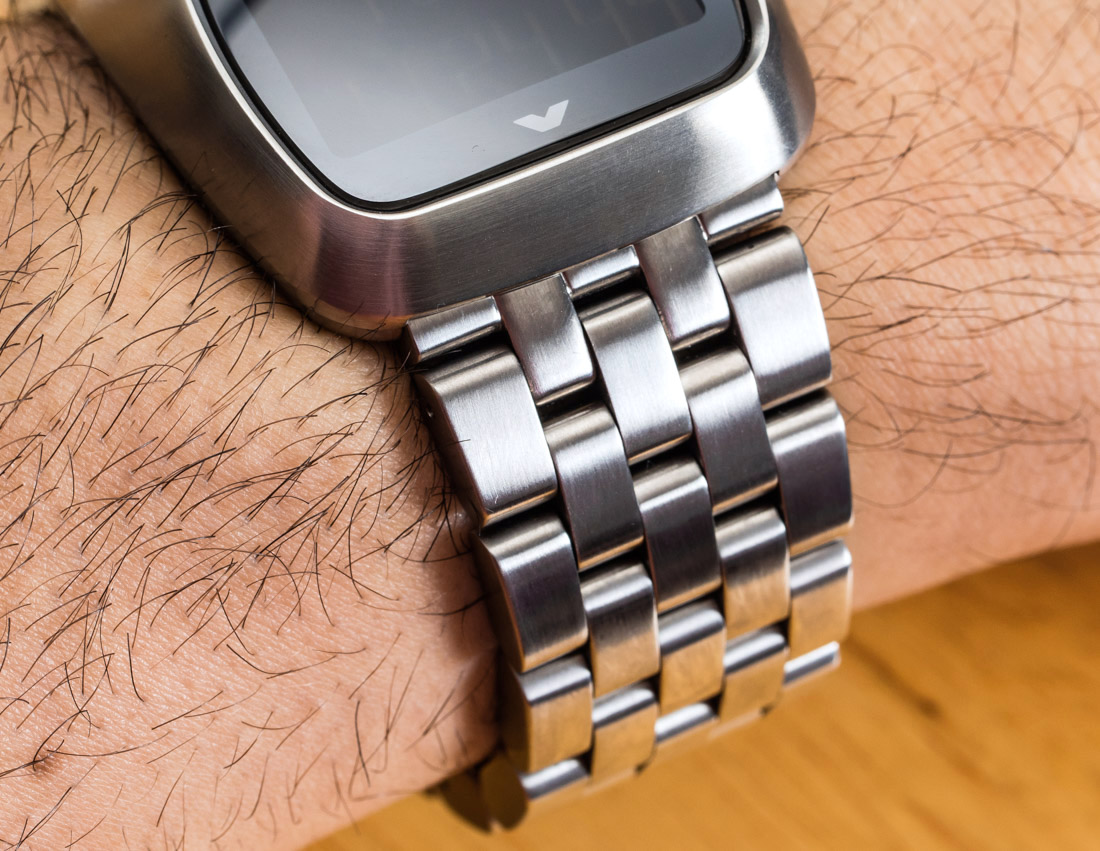 Despite the awkwardly-shaped case the Sigma wears quite comfortably. Reading the time via the screen is where I think Ventura could have done the most to improve this. They do use a very high-quality LCD screen with a negative display (the screen is dark while the numerals are light), but it could have benefited from much more contrast. The marketing images of the watch make it seem as though the numerals just pop out at you – which isn’t entirely the case. It isn’t that the screen is tough to read, but with the glare on the sapphire crystal and the fact you you need to orient the screen toward you in order to read it easily – overall legibility is where the designers could have put in the most extra attention in my opinion. I’d actually be curious to see what a design like this watch using an e-ink screen might be like. 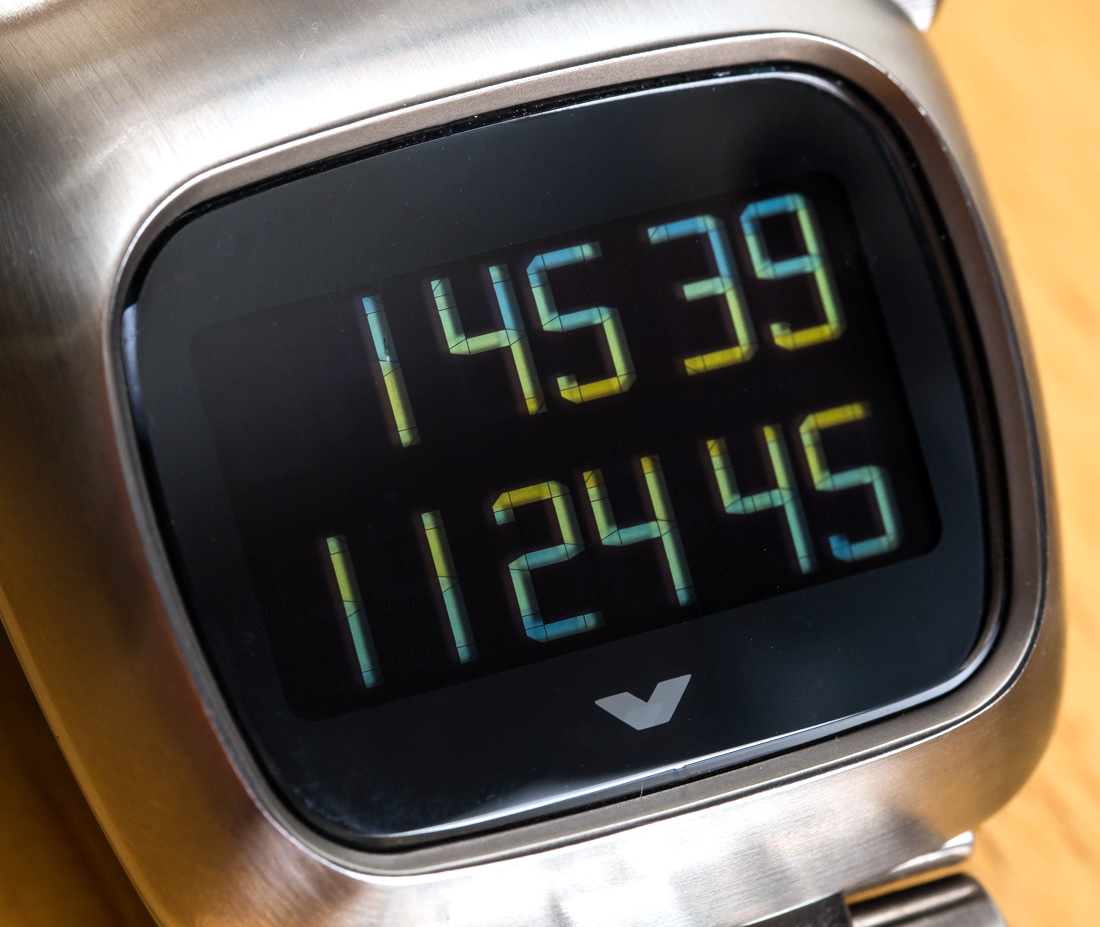 The screen itself is pleasant with attractive rounded numbers that feel more elegant that traditional digital numerals on the majority of LCD screens out there. The movement inside of the V-Tec Sigma W25 is the Ventura VEN_03 module. It has a small pusher on the left-side of the case to control the backlight (which is handy in the dark) as well as a pusher/scroll wheel on the right side. This wheel is rather simple to use and mostly intuitive. Though its scroll operation is not quite as “high-end feeling” as I’d like in a refined Swiss product such as this. The scroll wheel easily moves through the various options for the second line of numbers on the dial, while the top line remains the time. The operating system includes two time zones, a calendar that includes the week number, a chronograph, alarm, and countdown timer. Battery life is said to be about 2-3 years which is pretty standard. While the operating system takes some getting used to, I think Ventura did a good job designing it even though it isn’t exactly revolutionary. 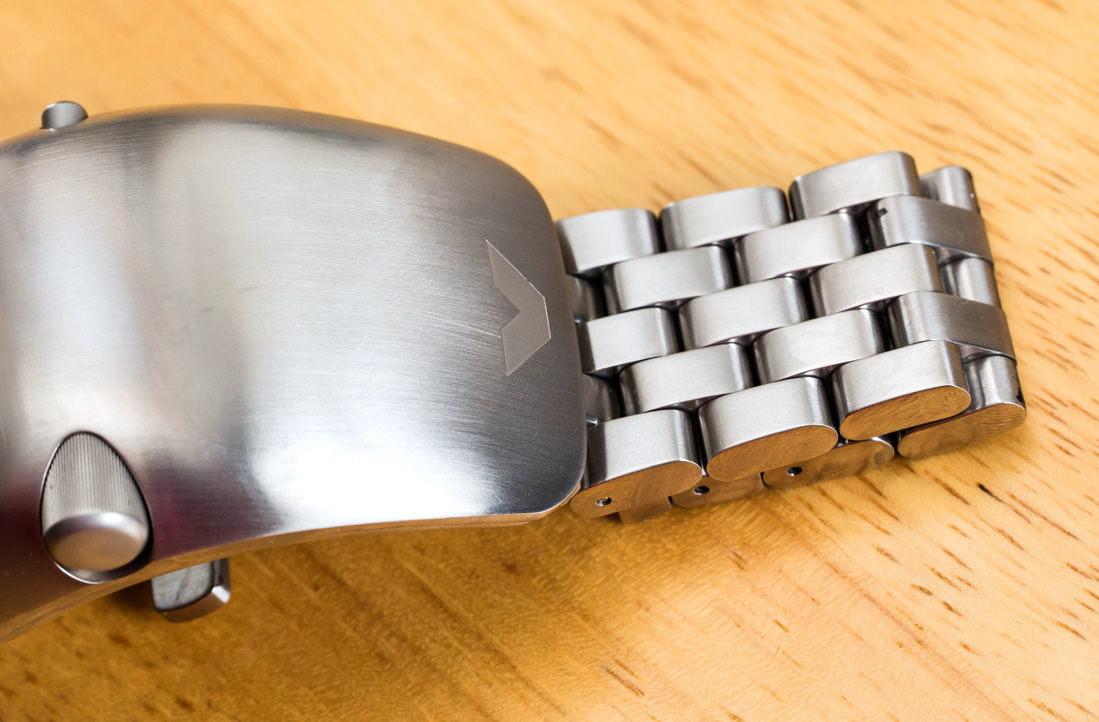 In the Bangkok Dangerous movie the watch was shown a lot during times when Cage’s character needed to precisely time an action. Digital watches are always going to be inherently easier to read in a precision manner compared to analog dials. I think the emotional romance of a watch like this is the inspired industrial design of a what is a very straight-forward tool-style watch. What sort of tool? One that allows professionals seeking something cool on their wrist to be on time in a digital age. The way a timepiece like the V-Tec Sigma as a design statement feels relevant in the information age is quite different and more profound than an analog watch. 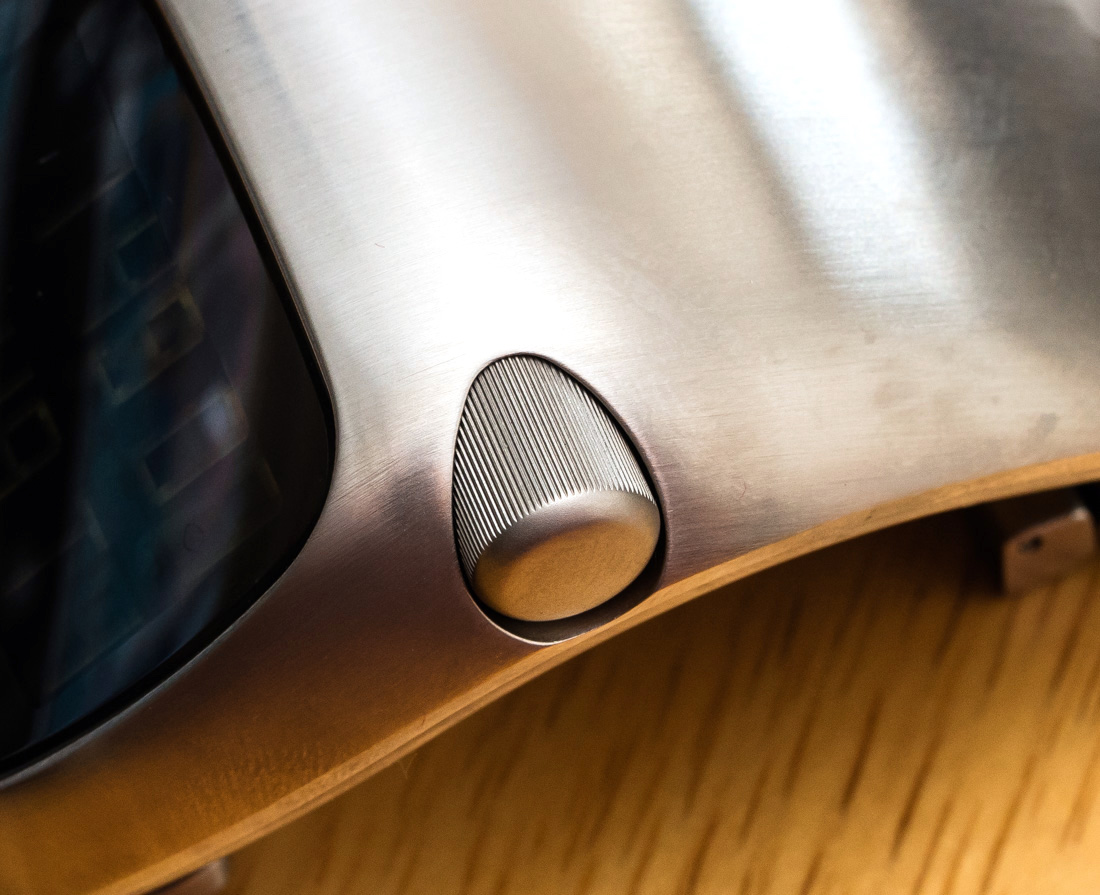 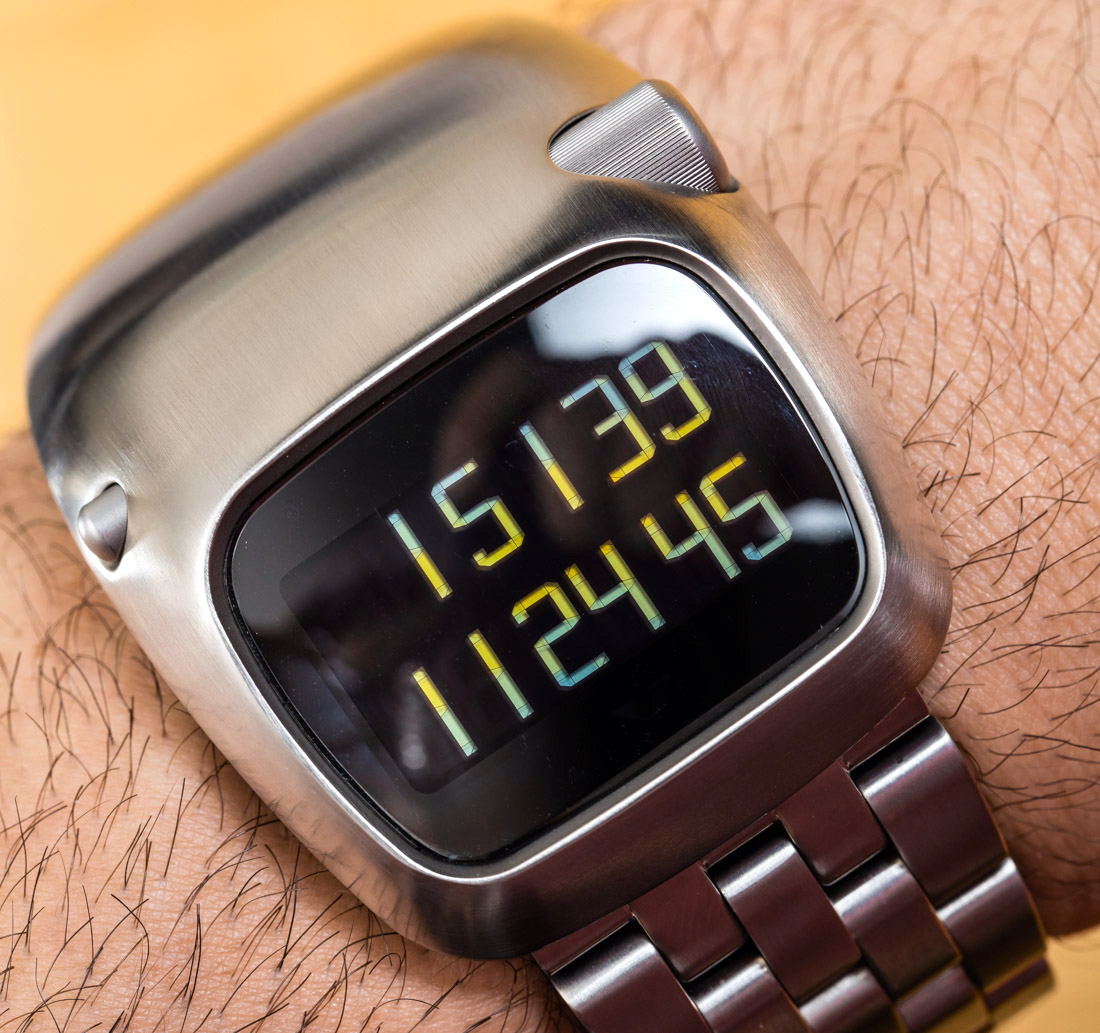 As collectibles I think Ventura watches are great if anything because of their originality and the fact that there simply aren’t that many high-end digital watches out there. If you are like me and grew up wearing digital Casio (or otherwise) watches, then I think the appeal of something that marries luxury watch design with the practicality of reading a digital versus analog display is compelling. Digital watches are often not going to be seen as classy or sexy as many analog (traditional) watches and because of that I think timepieces such as the Ventura V-Tec Sigma (and many other digital) models will continue to have niche appeal for those who can understand when to wear them and how to best communicate their virtues to onlookers. The last retail price I saw for this Ventura V-Tec Sigma W 25 S watch is $850 USD. See more at Ventura watch’s website here.