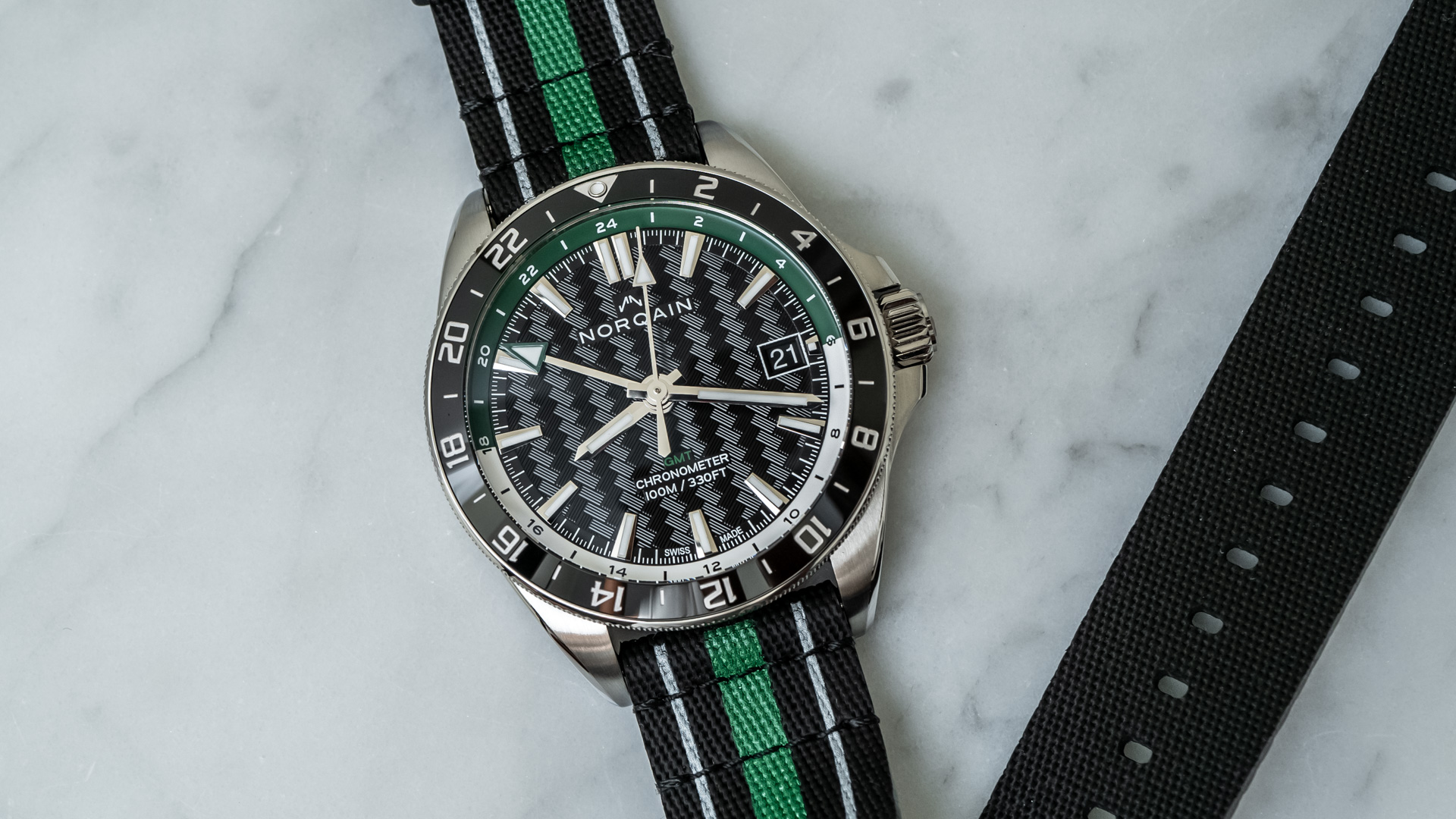 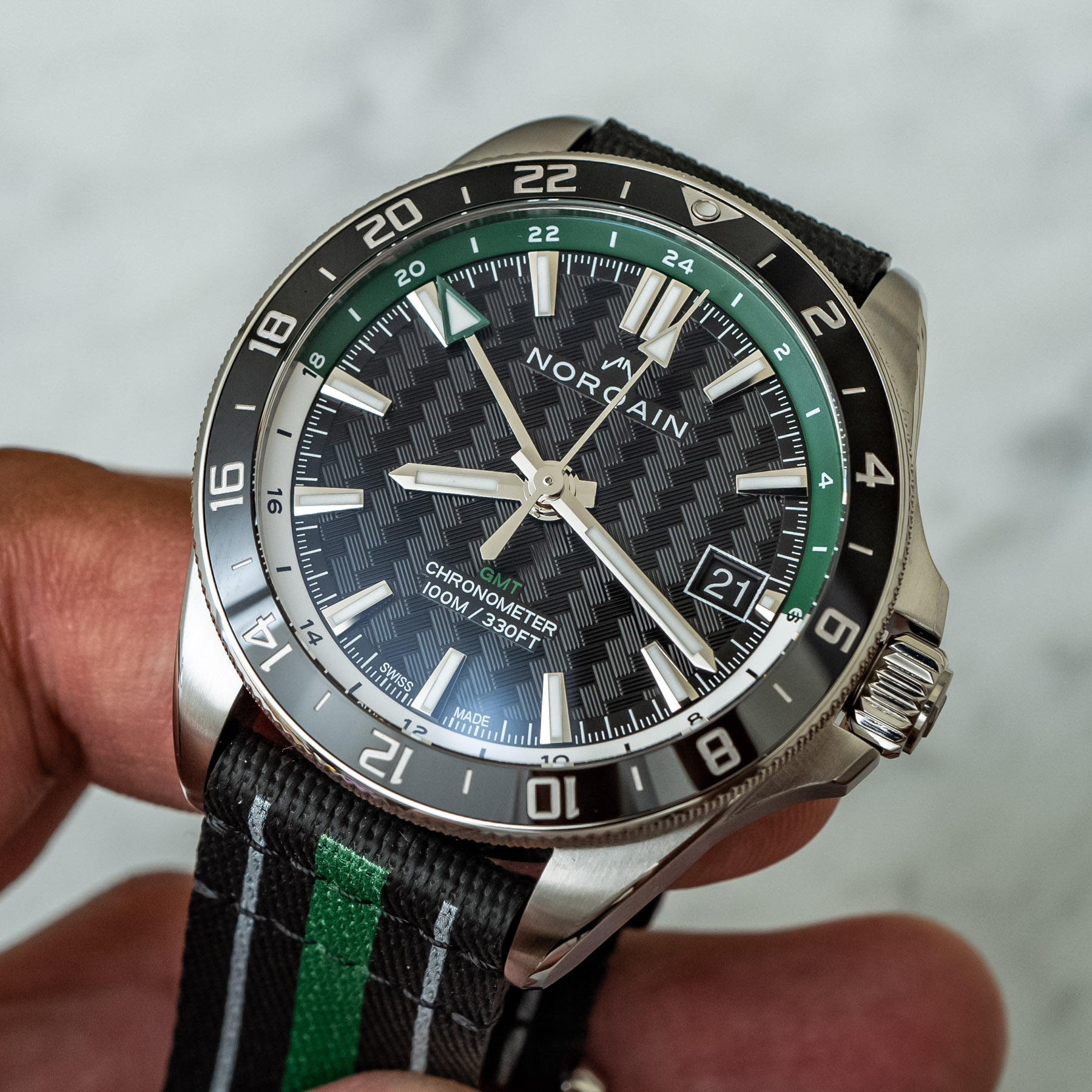 It was just about one year ago that NORQAIN debuted its first travel watch with the rather handsome vintage-inspired Freedom 60 GMT featuring the then-new COSC-certified manufacture NN20/2 GMT movement done in partnership with Kenissi (known for supplying movements to Tudor and Chanel). Now the brand launches the Adventure NEVEREST GMT, a contemporary sports watch that follows up the three-hander Adventure watch released this past summer. The NORQAIN Adventure NEVEREST GMT debuts as a trio, with two steel models with forest green or royal blue accents and a black DLC model with sunset orange accents. 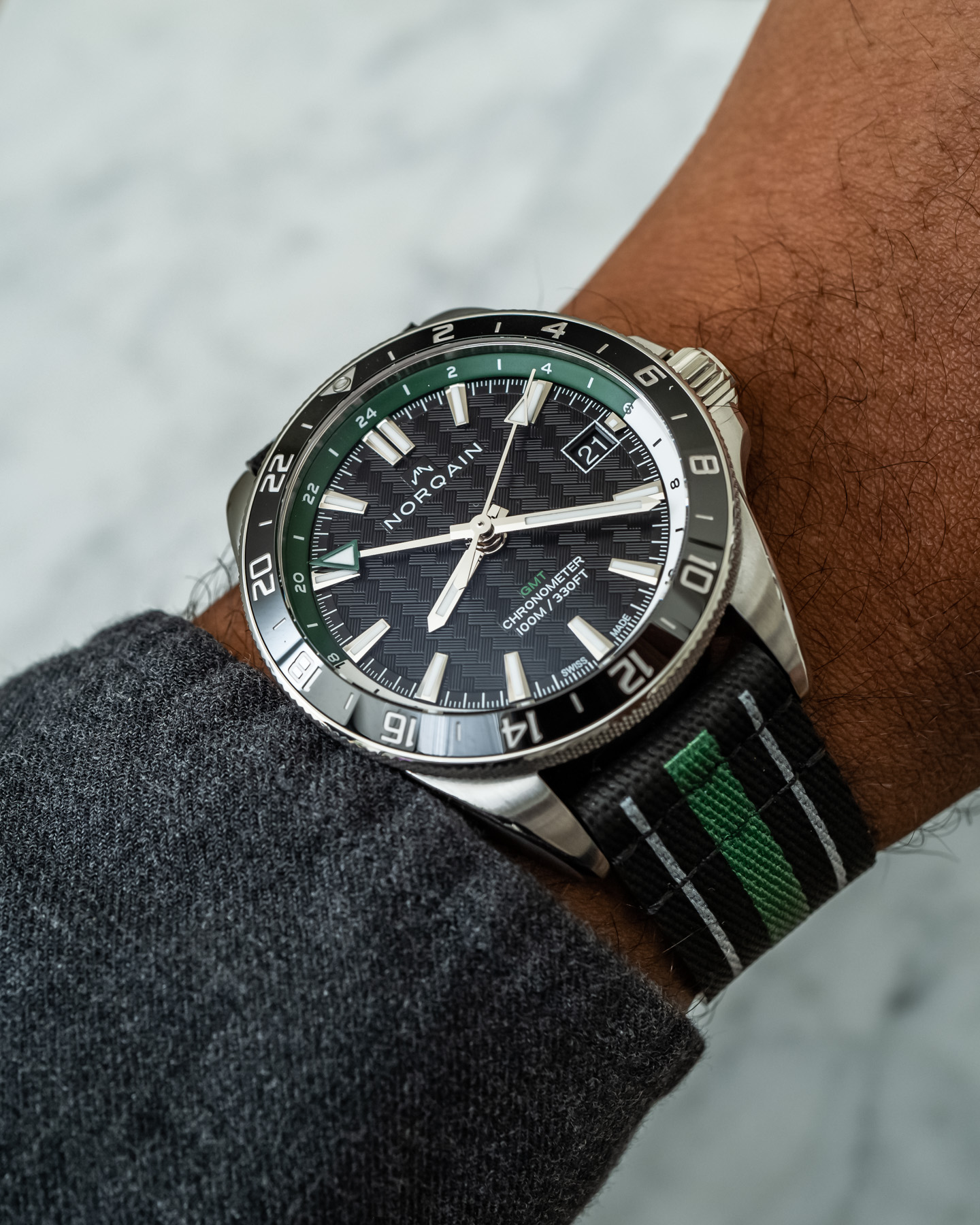 The watch is powered by the NN20/2 GMT movement that operates at 28,800 vph and has a 70-hour power reserve. Every now and then I’ve heard or read comments that are framed with the premise that NORQAIN is somehow claiming to have “in-house” movements and that is just not the case. My suspicion is that the word “manufacture” is sometimes mistaken for being synonymous with “in-house,” but just to be clear, NORQAIN partners with (and are very transparent about) Kenissi. The first movement the brand did with Kenissi was the three-hand NN20/1, and the second movement is the NN20/2, the latter of which we see in this AN GMT. 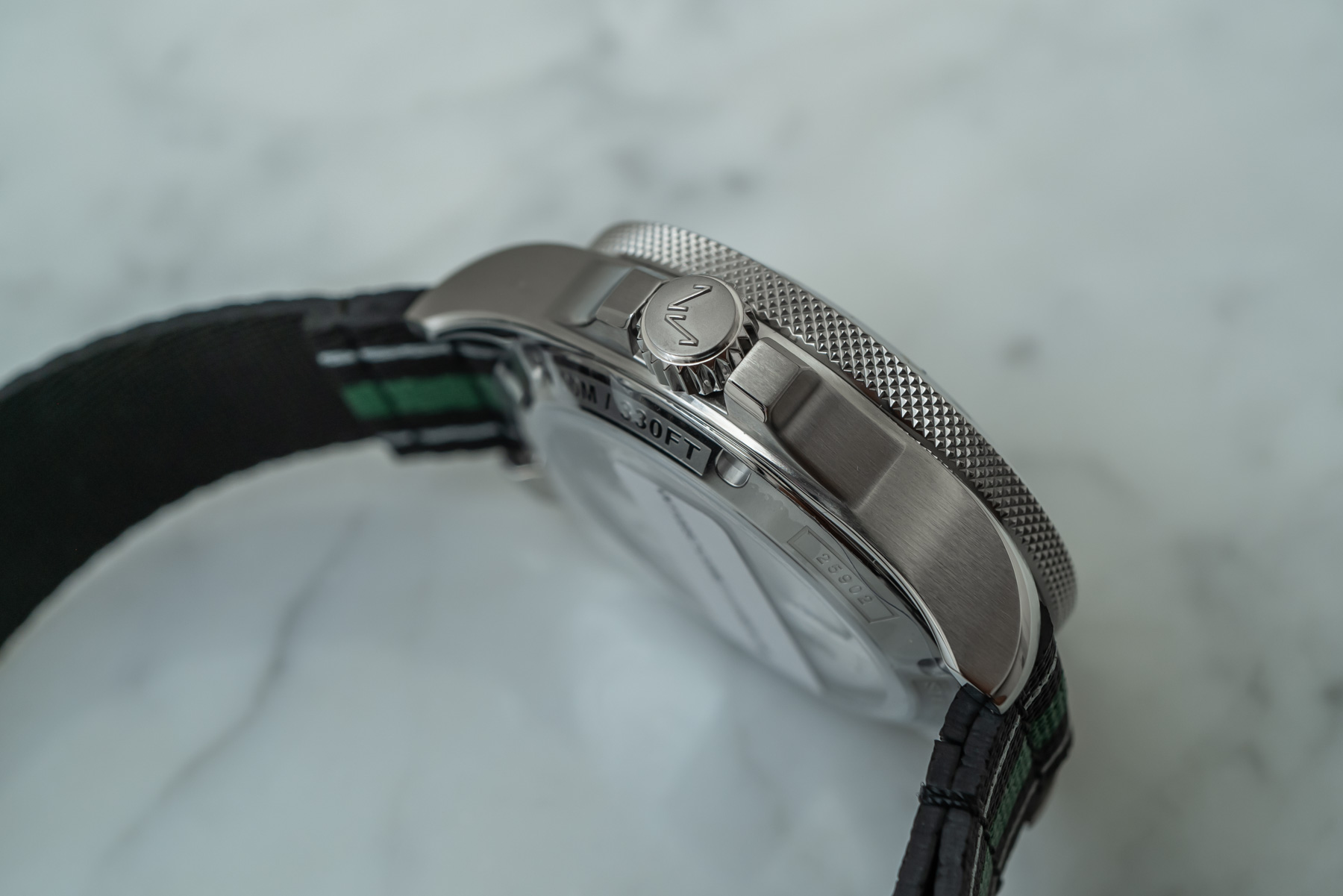 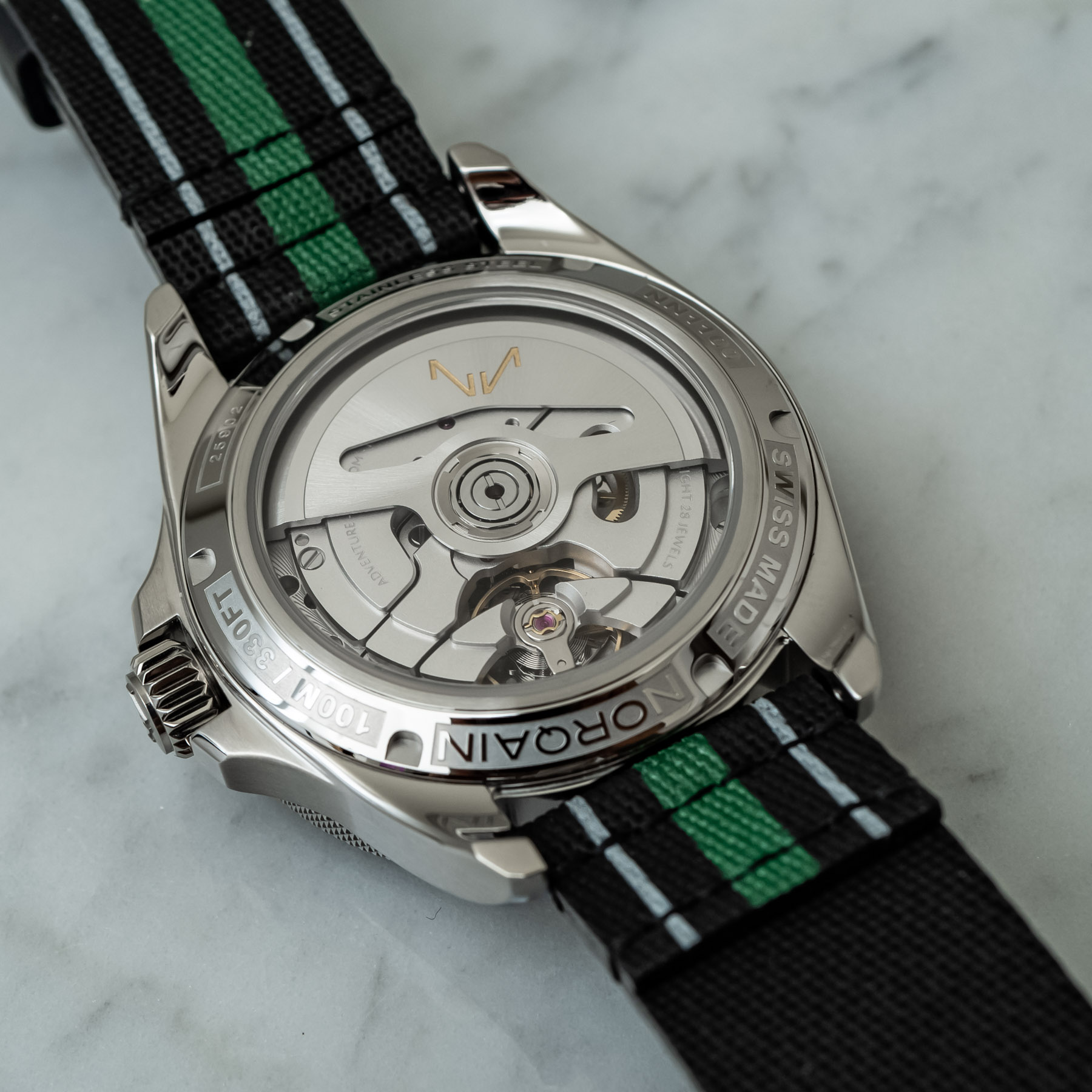 It’s not surprising that the NN20/2 is quite similar to the calibre MT 5652 found in Tudor’s hugely successful Black Bay GMT, since both were produced by Kenissi. That said, there are differences between the two when it comes to overall finishing, different rotors, and the NNN20/2 using a Nivarox hairspring while the MT 5652 uses silicium. All this context aside, it’s hard to argue with the fact that NORQAIN has a GMT in its stable that outperforms those by many established brands. 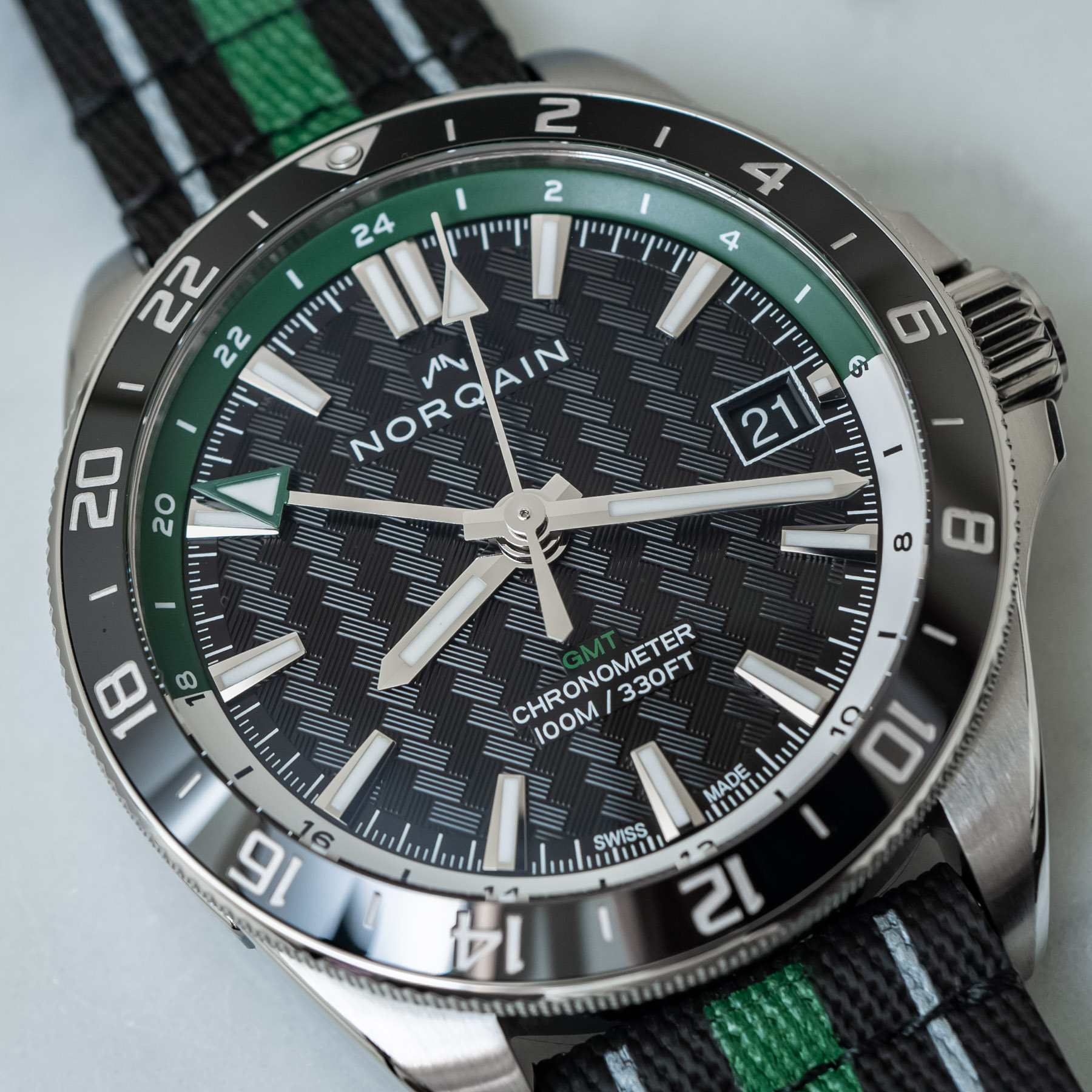 An independently adjustable hour hand synced to the date window (both forwards and backwards) makes for an easy to use, and what some would call a “true” GMT. Unlike it’s predecessor the Freedom 60 GMT and something like the Grand Seiko Spring Drive GMT SBGE255, the NORQAIN GMT has a bidirectional rotating bezel done with ceramic insert which allows for the tracking of three time zones. 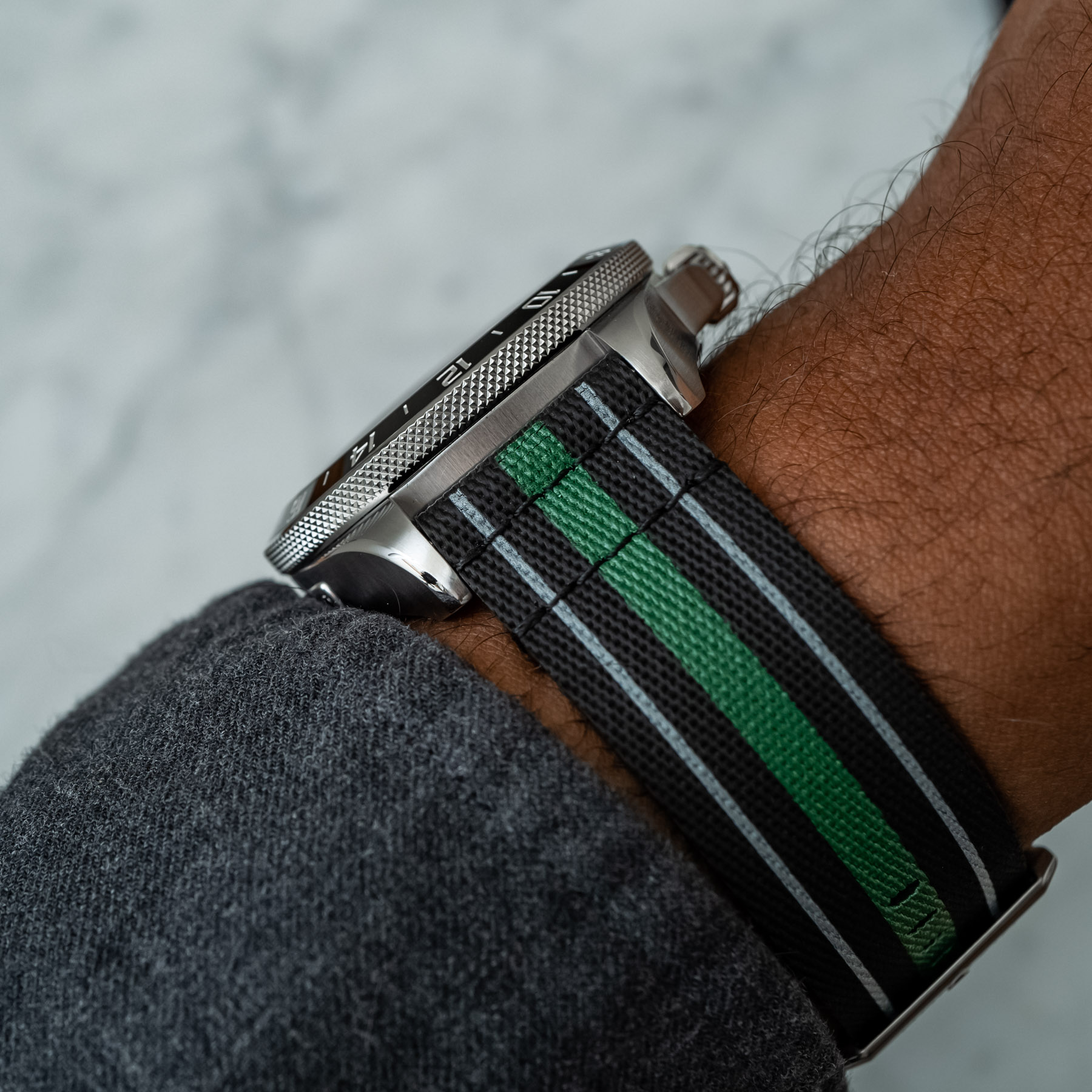 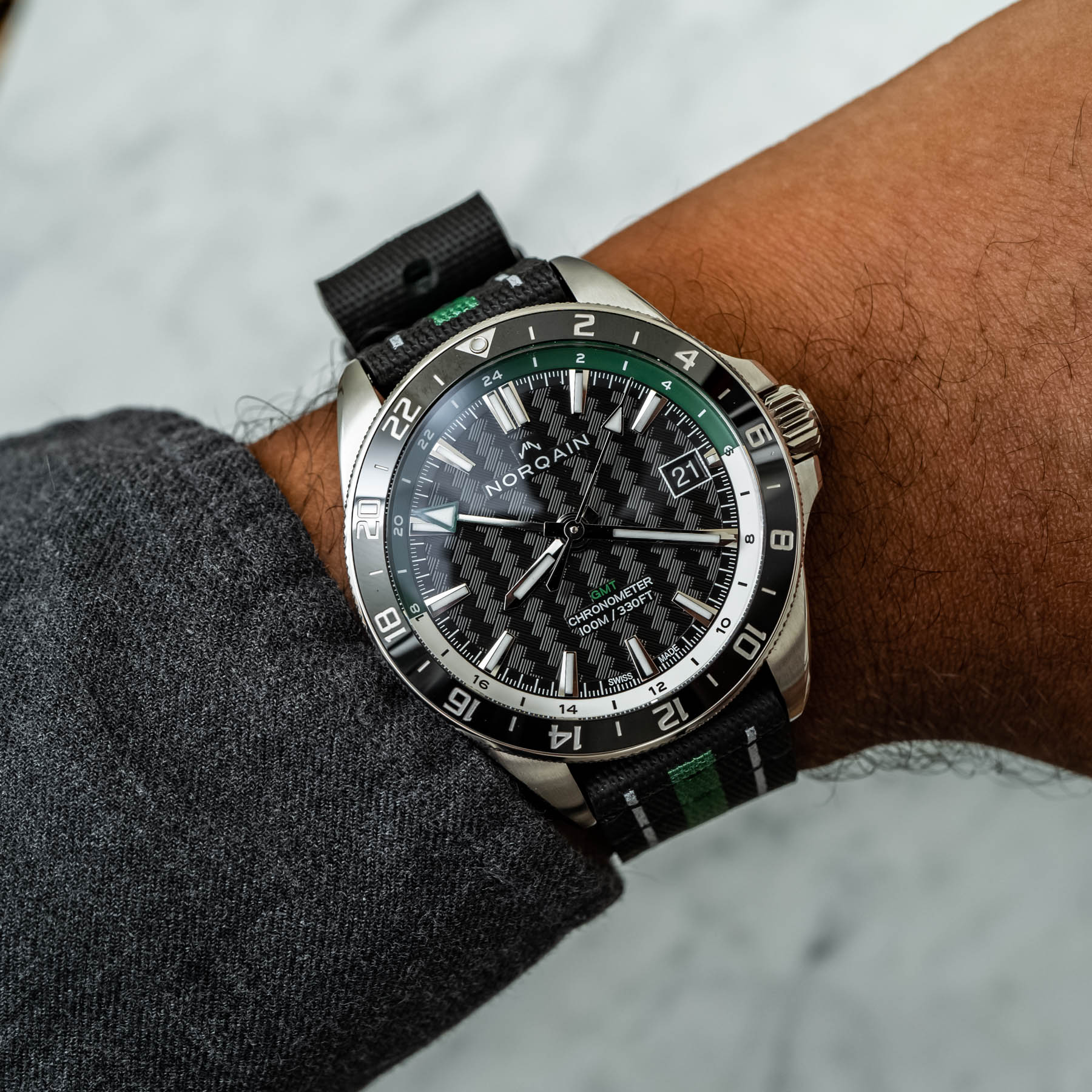 Moving on to the case and dial, the AN GMT measures 41mm-wide, 14.94mm-thick, and has a lug-to-lug measurement of 48.9mm. It’s not slim, though it’s just about the same as the aforementioned Black Bay GMT and GS SBGE255. The case has a very respectable 100M of water resistance, as well. In addition to bracelet and fabric strap, the brand is also debuting a new vegan rubber NATO strap that has matching accents with the color scheme of the chosen watch. 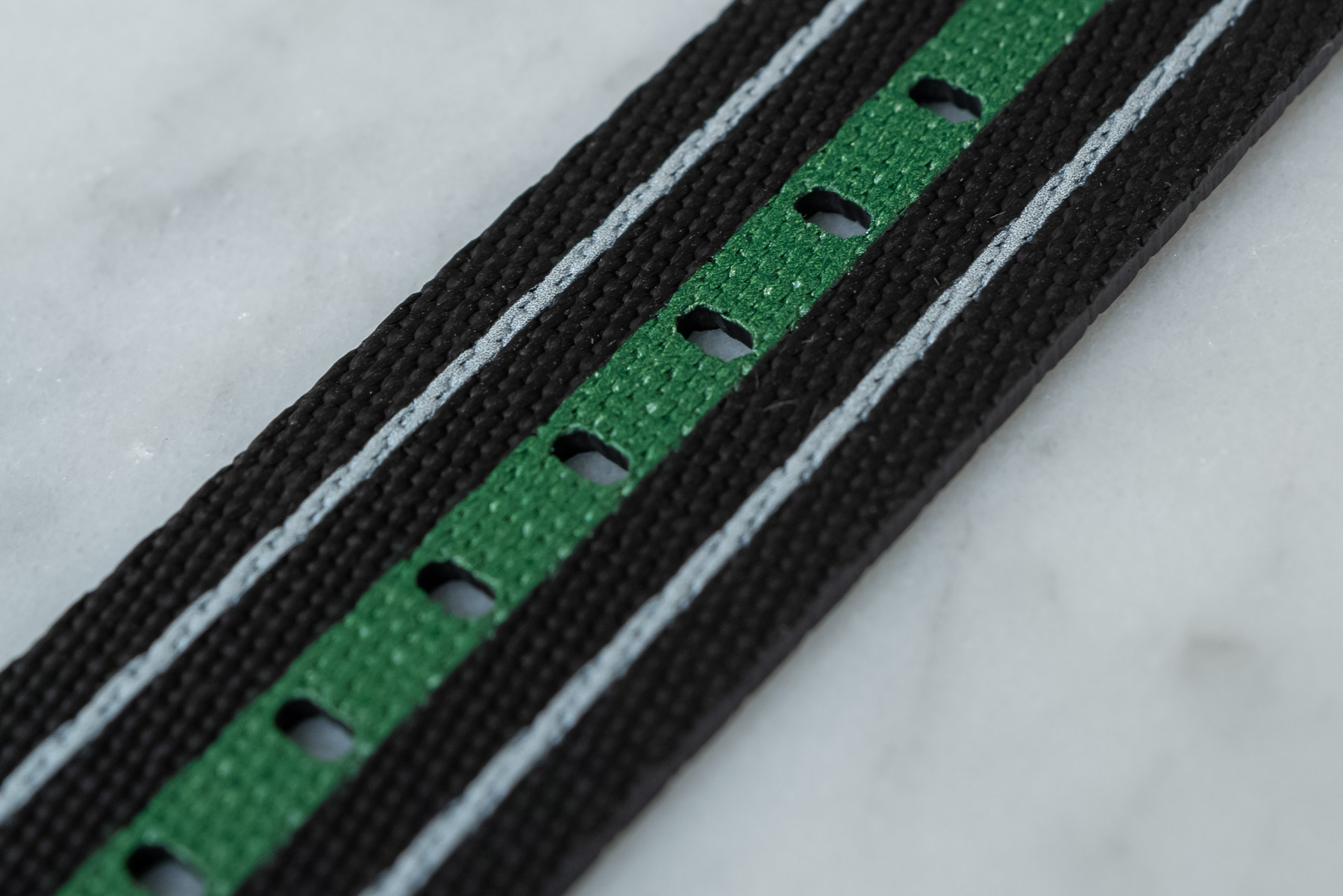 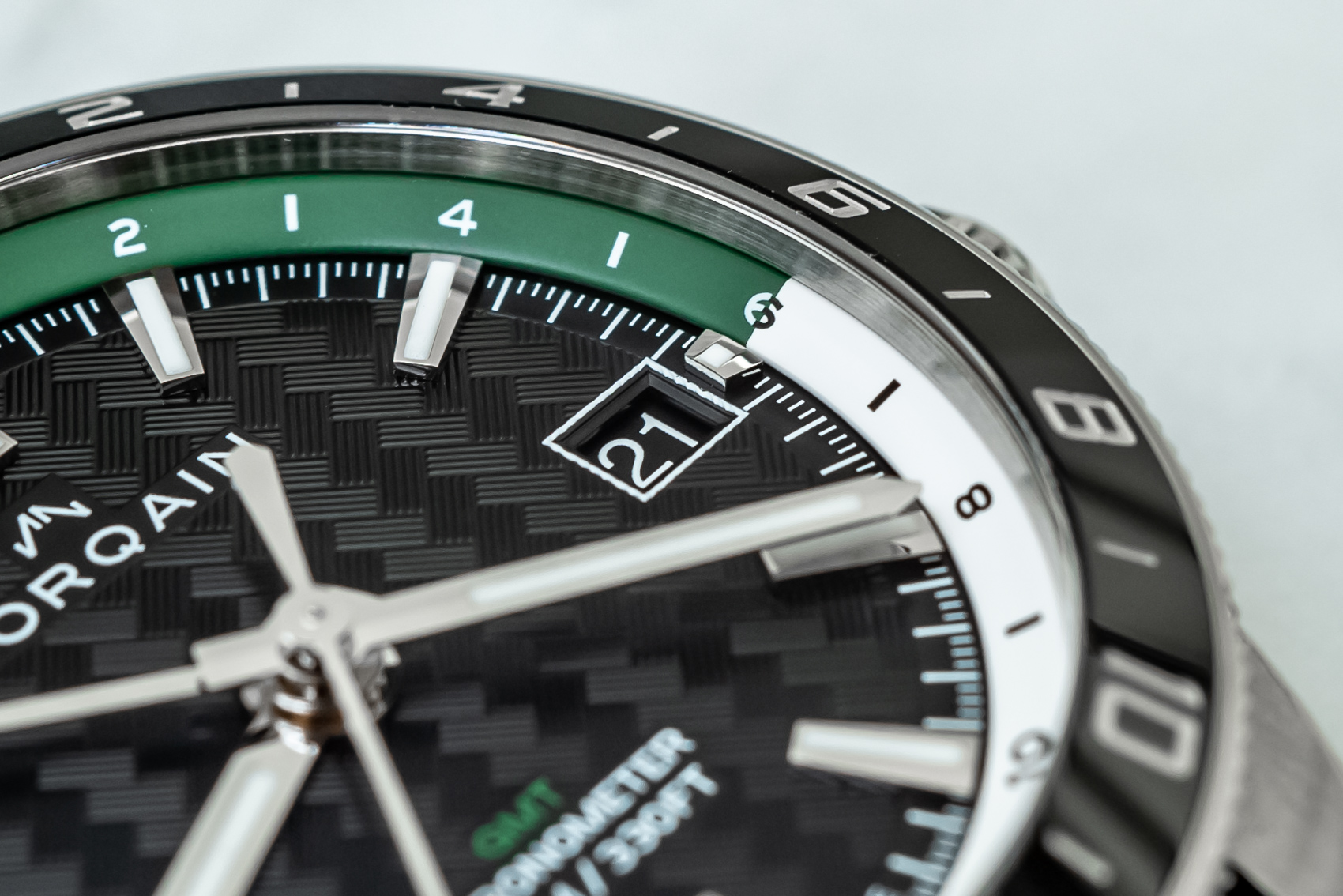 All three variants have the black NORQAIN pattern dial with matching black date window, red-pointed GMT hand, and X1 Super-LumiNova coating on the hands and indices. Dials are one of the brand’s emerging specialties, and I recommend checking them out in the metal if you’re able to, as they are quite impressive in person.

NORQAIN certainly doesn’t feel like it has to price aggressively to compensate for being newcomers any longer if these new GMTs are any indication. The steel Adventure NEVEREST GMT in either blue or green with the flex fabric strap or rubber strap is $3,690, while the rubber NATO as seen in this article is priced at $3,760, and on steel bracelet, the price is $3,900. The black DLC model with orange accents is a bit pricier, starting at $4,100 on strap, $4,190 on rubber NATO, and $4,500 on matching DLC bracelet. Note that 10% of sales proceeds will be donated to the Butterfly Help Project benefitting the families of Sherpas who have lost their lives in the Himalayan mountains. You can learn more at norqain.com.