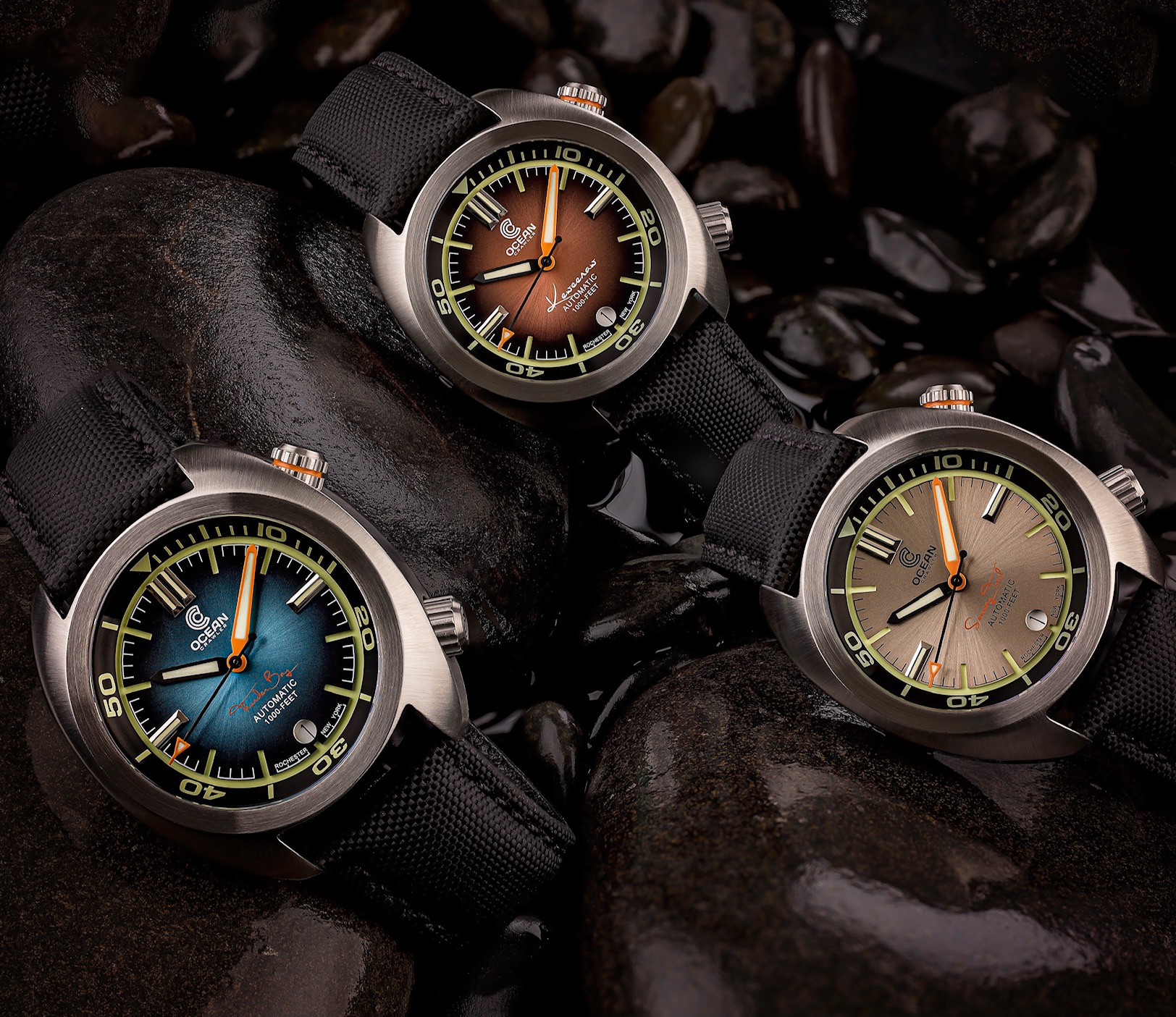 8 Comments
by SponsoredPost
Sponsored post presented on aBlogtoWatch by advertiser

American-based indie-favorite watch brand Ocean Crawler recently announced a limited run of V2 Great Lakes Divers. Each model of this trio is named after an iconic dive site located within one of the five Great Lakes and features its own novel colorway while maintaining the design-language that has remained consistent with every release from Ocean Crawler since 2017. The twin-crown compressor styling, coupled with the symmetrical cushion case, harkens back to the 1970’s dive watch innovation. Meanwhile, Ocean Crawler’s innovative approach to varying coloration makes for an immediately recognizable and modern take on the dive watch.

Ocean Crawler is an independent brand founded in Rochester, New York. Over the course of the past three years, they have gained momentum by putting out value-driven timepieces with exceedingly inventive model names, from the “Paladino Wavemaker” to the “Shipwreck Hunter”. Regardless of how high the moniker rates on the “awesomeness” scale, there is a commitment to quality that is at the core of the Ocean Crawler brand. While watches have gradually become less of a necessity, there is a certain nostalgic romanticism about staying grounded with analog instruments in this digital age. 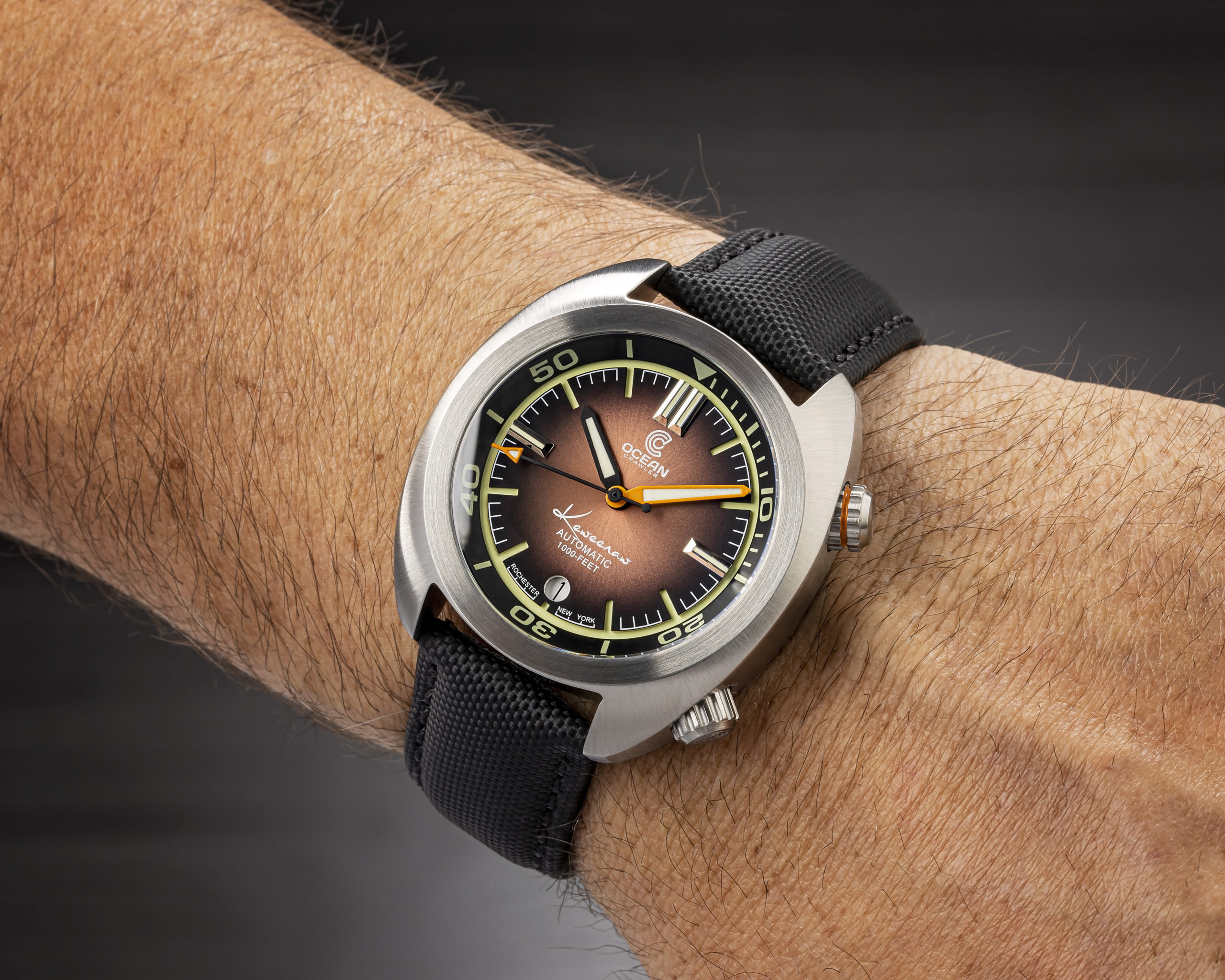 The appeal of a dive watch, for many, transcends actual aquatic application. They are a tool meant to be capable of handling the most rigorous of tasks, above and below sea-level. Ocean Crawler ensures this durability through an extensive and grueling testing process. Each and every timepiece is subjected to strenuous decathlon of shock tests before being released to consumers. Included among this onslaught of challenges is the high impact hammer test, which delivers a devastating blow equivalent to 6,000G’s. After the watch triumphs over these trials, unscathed and fully functional, only then is it ready for release to the public. 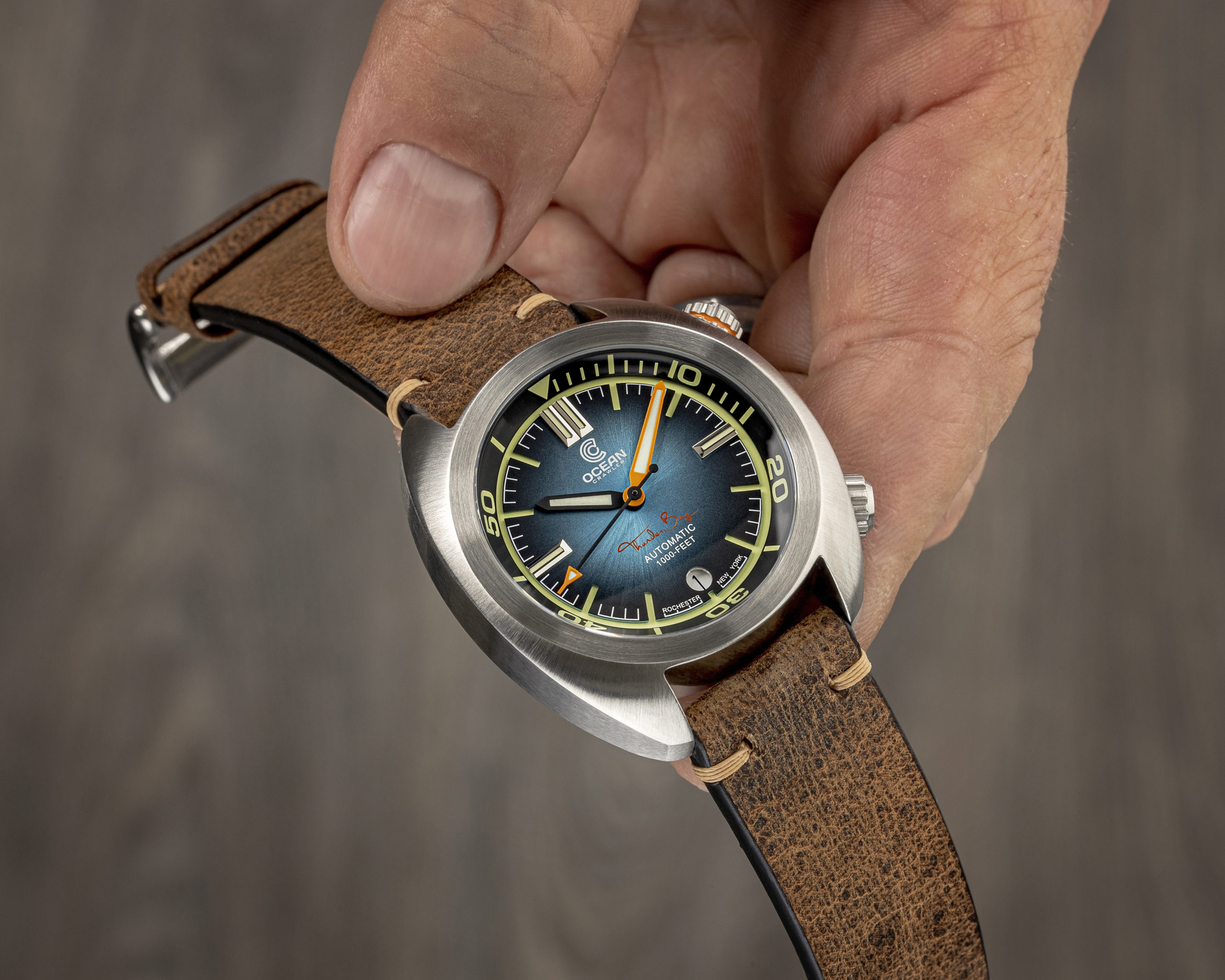 The Ocean Crawler Great Lakes V2 series consists of three models; the Thunder Bay, Keweenaw, and the Seaway Trail. Each of these titles pays homage to a particularly placid dive site within one of the Great Lakes. The watches are built to perform to the exacting standards of any aquatic enthusiast. Every individual watch has been physically immersed in water and pressure tested to 1000 feet, making this the ideal dive-companion for anything from the azure waters of the Great Barrier Reef to the murky depths of Lake Huron, and everything in-between. 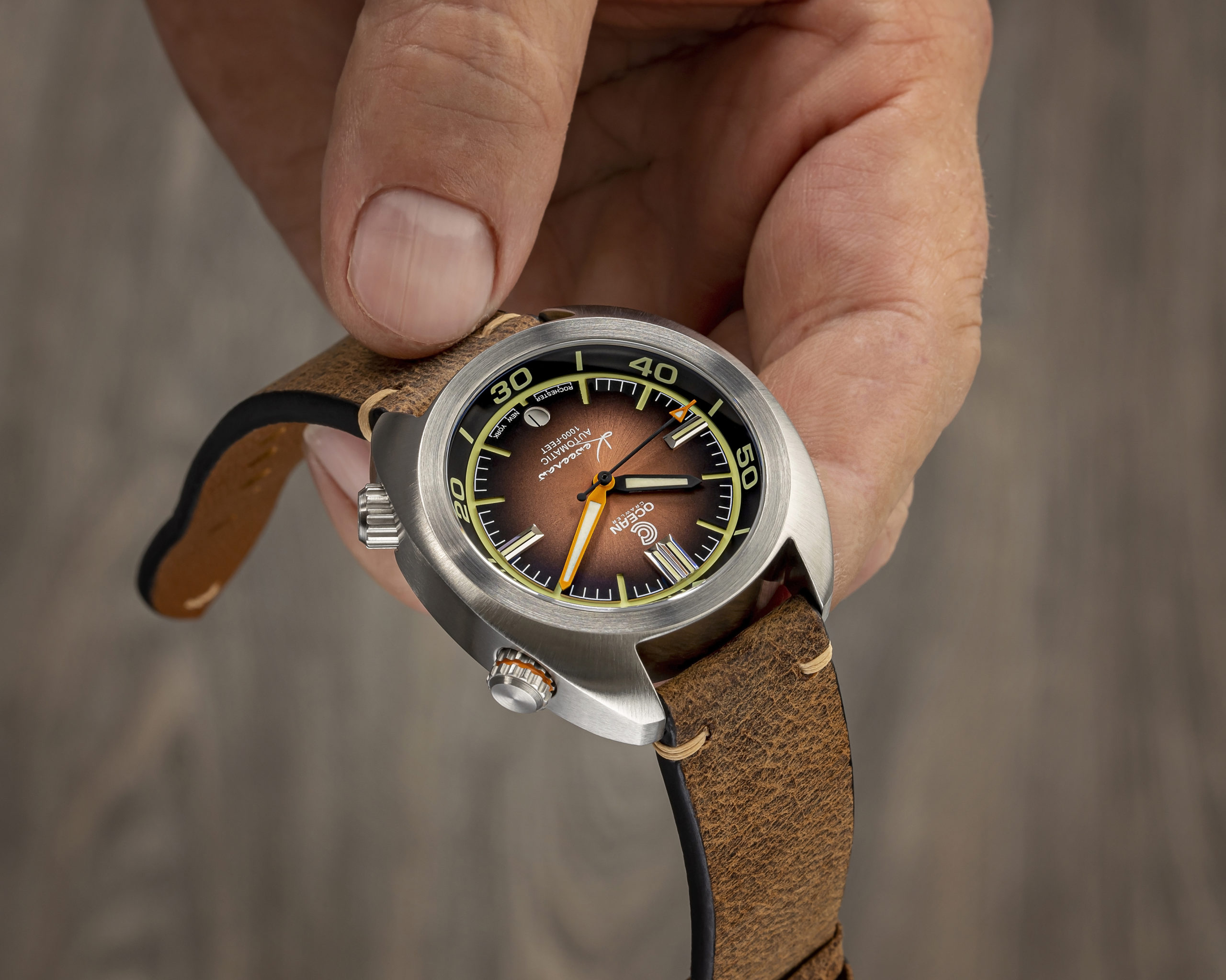 All three iterations of the Great Lakes diver feature a 39.7mm diameter brushed stainless steel case measuring 13.5mm thick. They clock in at 44mm from lug tip to lug tip, making for a stout, yet wrist-friendly silhouette. They are powered by a Swiss-made Sellita SW200-1 automatic movement which will provide 40 hours of power reserve when fully wound.  The twin crown compressor-style design was popular in the 1970s but is far less prevalent on the modern market. The two o’clock crown (marked with an orange ring) rotates the internal 120 click bezel, while the four o’clock crown is used for time setting. The concept of the internal bezel originated with the notion that it would be far less likely to be affected by outward forces, such as a knock against an oxygen tank. To ensure legibility, and durability to match, the Great Lakes V2 utilizes a 4.0mm thick anti-reflective sapphire crystal. 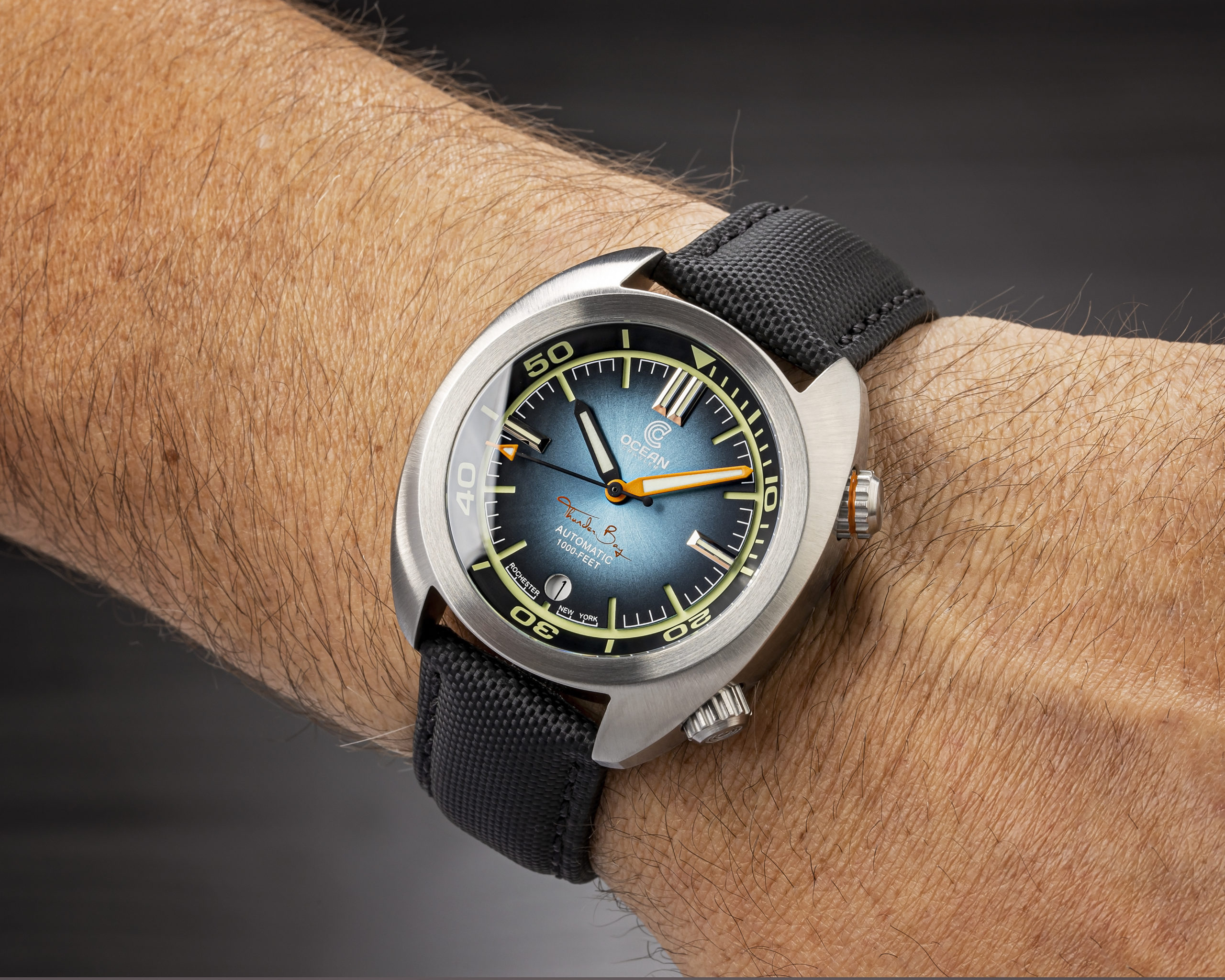 Great Lakes V2 divers come with two different strap options, genuine leather as well as water-resistant Kevlar. The 20mm lug width ensures that there is a multitude of aftermarket strap options available to customers. The high-visibility orange minute hand makes tracking elapsed time underwater a simple task, while the persimmon hue ties in nicely with the bezel operating crown and arrow-tipped second hand. Each watch within this range features its own unique dial color and theme. The Thunder Bay features a blue gradient dial. The way the shade changes from the bright blue center to the navy hue of the periphery matches the namesake waters of Lake Huron. The Keweenaw is named after a Lake Superior dive site that has claimed a slew of steamers and freighters over the years. Set apart by its gradient brown dial, it appears almost auburn in certain lighting. This is the only model to forego the signature orange dial text for a more subdued white. The last of the group is the Seaway Trail. Rather than implement a gradient dial like the two prior models, the Seaway Trail has a sunburst copper finish that catches the light like the sun reflecting off the waves of Lake Erie. Each watch maintains its own sense of charm and individuality, but all are capable of tackling any excursion you have within your sights. 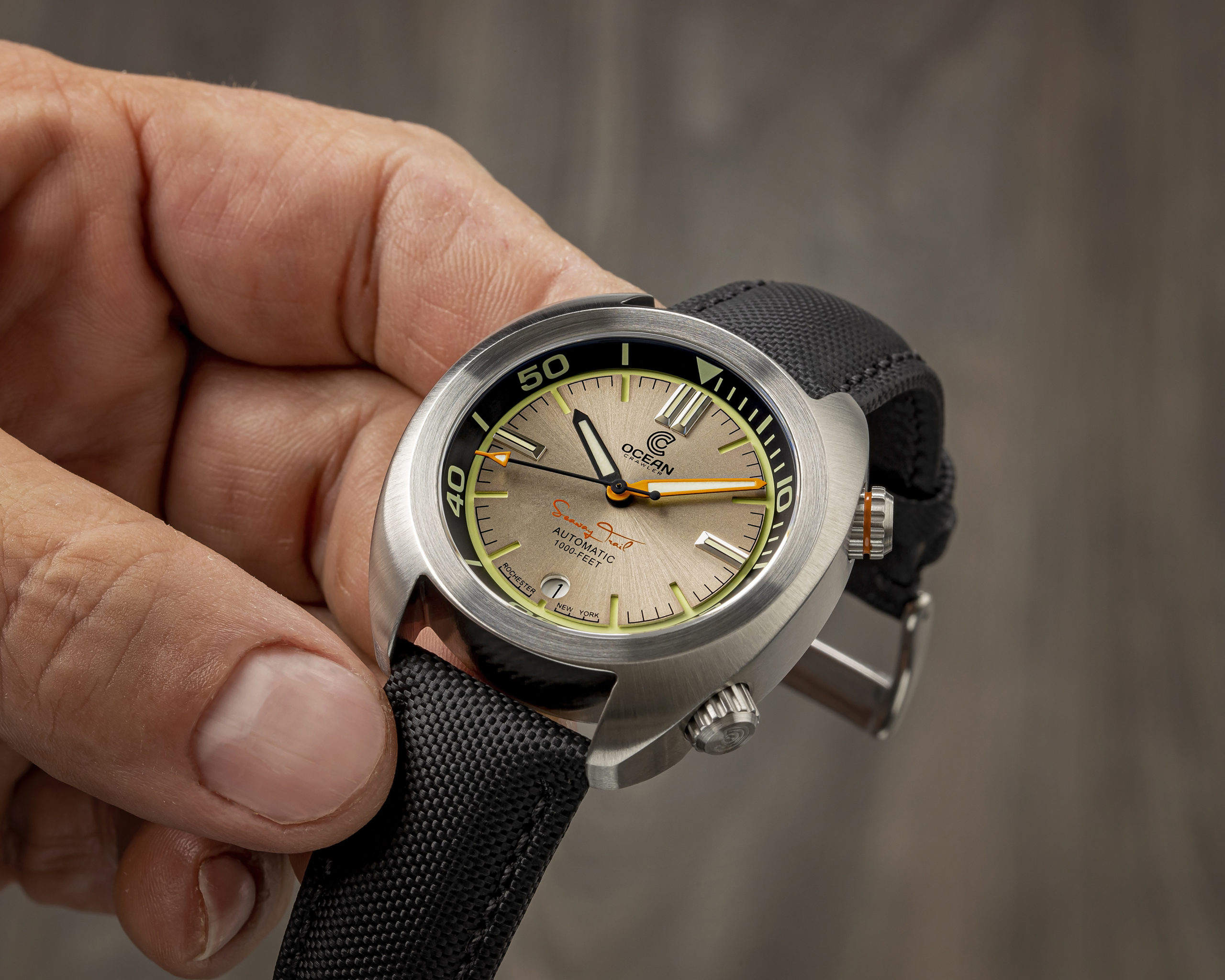 Beneath the still waters of the Great Lakes lie a slew of sunken vessels, often referred to as “shipwreck ally”. These derelict titans of transport litter the lakebeds and offer intrepid divers an opportunity to explore what remains of their former glory. As the North winds begin to pick up, gather your gear, plot your peregrination, and head over to Ocean Crawler’s website to choose which watch should accompany you once the seasons change and the swells settle. Each Great Lakes Diver V2 is limited to 100 individually numbered pieces and currently retails for a price of $999 USD.