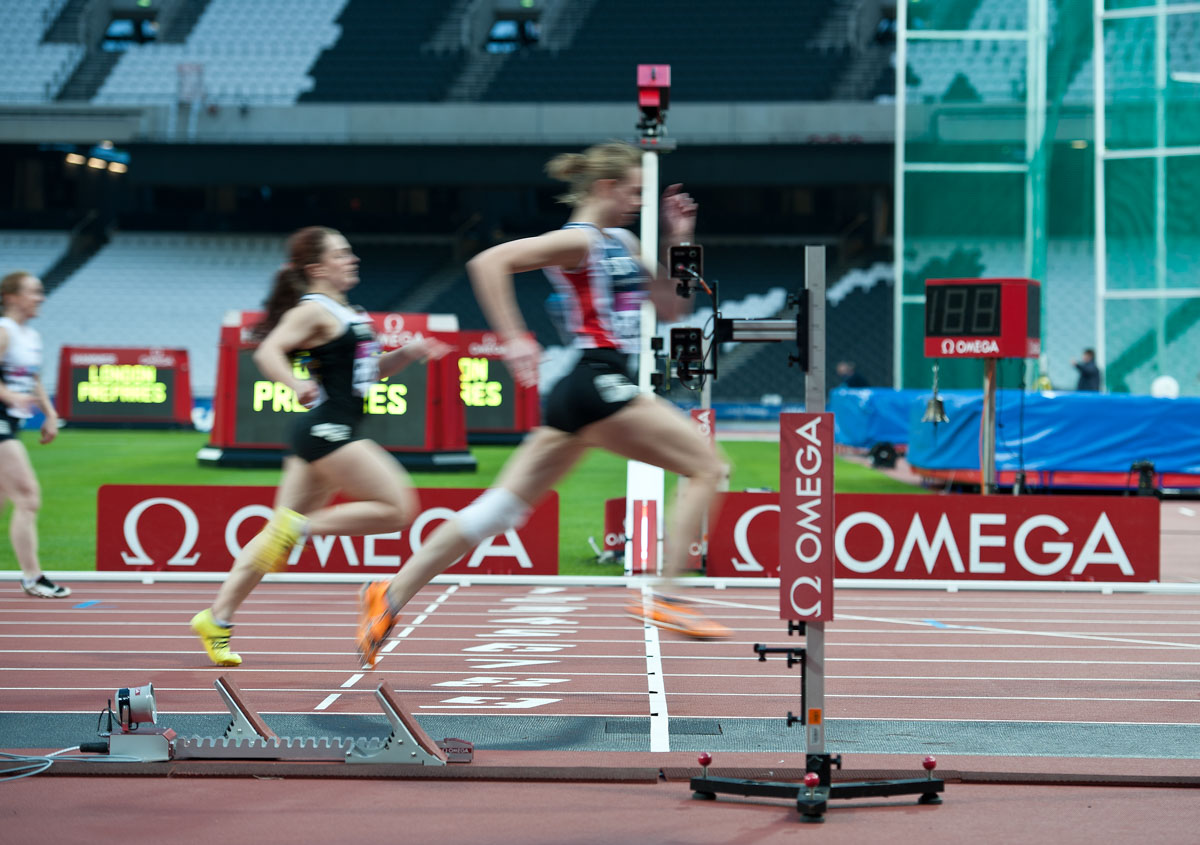 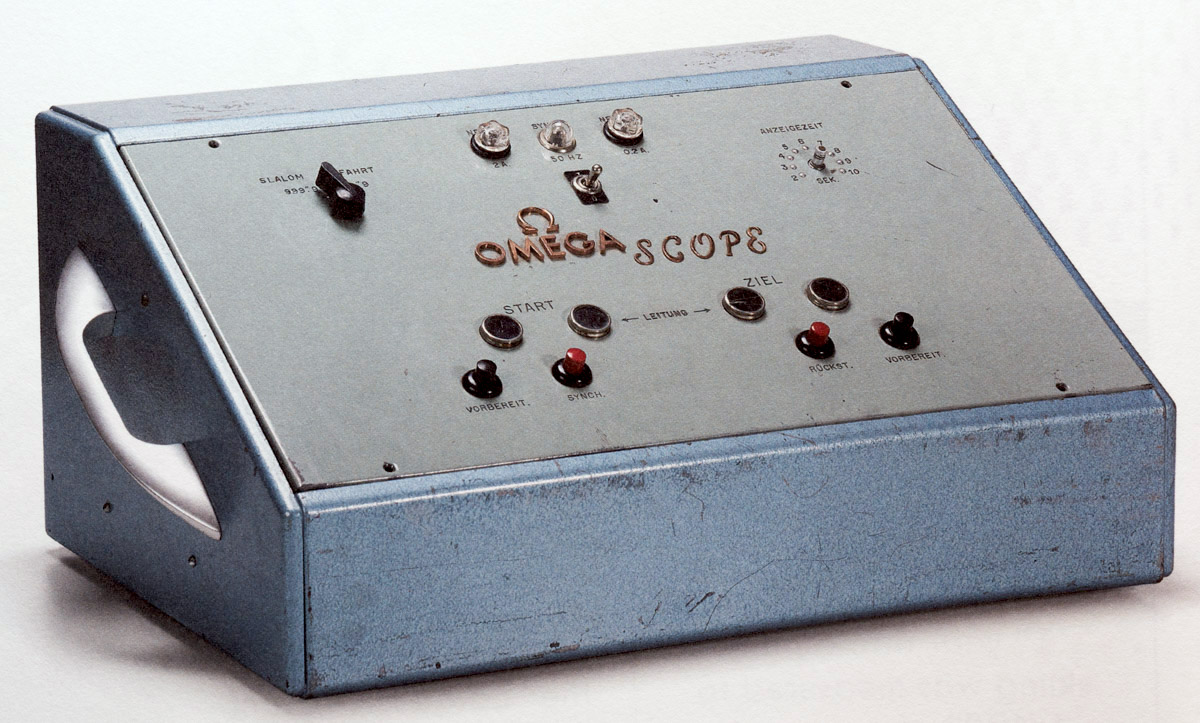 The 1964 Omegascope, allowing for displaying time superimposed over an Olympics television broadcast for the first time.

1964, Innsbruck saw the first time that running time was superimposed over the live television picture, thanks to the new Omegascope. Never before had spectators outside a venue been so quickly and well-informed about events taking place in sports. This had of course placed Omega’s precision openly on display – but, simultaneously, had left no room for error. 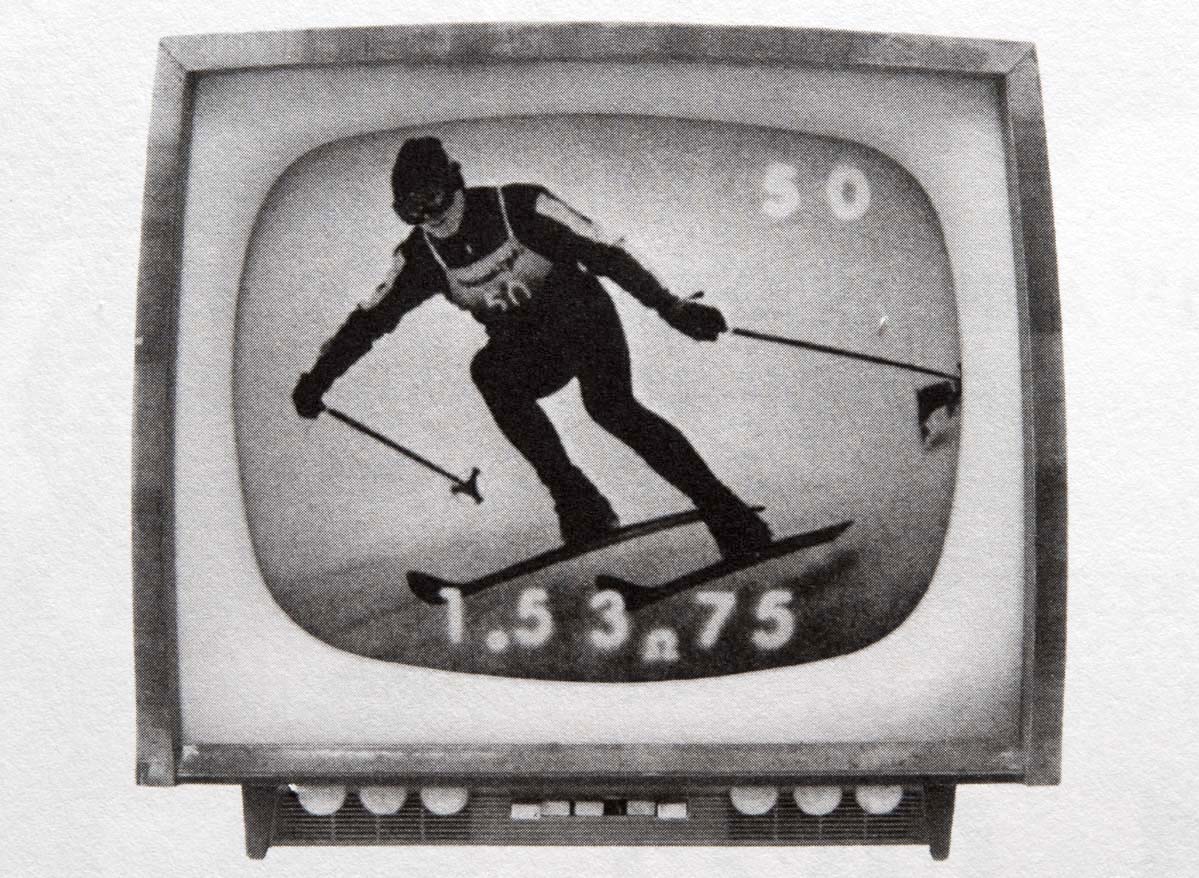 Time on screen, for the first time… And a tiny Omega logo.

The 1968 Winter Olympic Games in Grenoble made for a big year from a technical perspective. It was the first Games broadcast in color, and it was also here that Omega introduced for the first time its integrated timing system. This meant that timing results were distributed among the press, television channels, judges, and the general public with additional information and statistics. Used with Omegascope, all this neatly gathered data could be put on TV screens.

Mexico, 1968. The 1960 debacle in the swimming final made Omega decide to develop electronic touch pads in a way of rethinking timekeeping in the pool. The idea was to let the swimmers time themselves, as timing would begin with the start of the race, but would end with the swimmer touching a touch-sensitive pad built into the wall of the pool – this device was first introduced in Mexico, 1968. 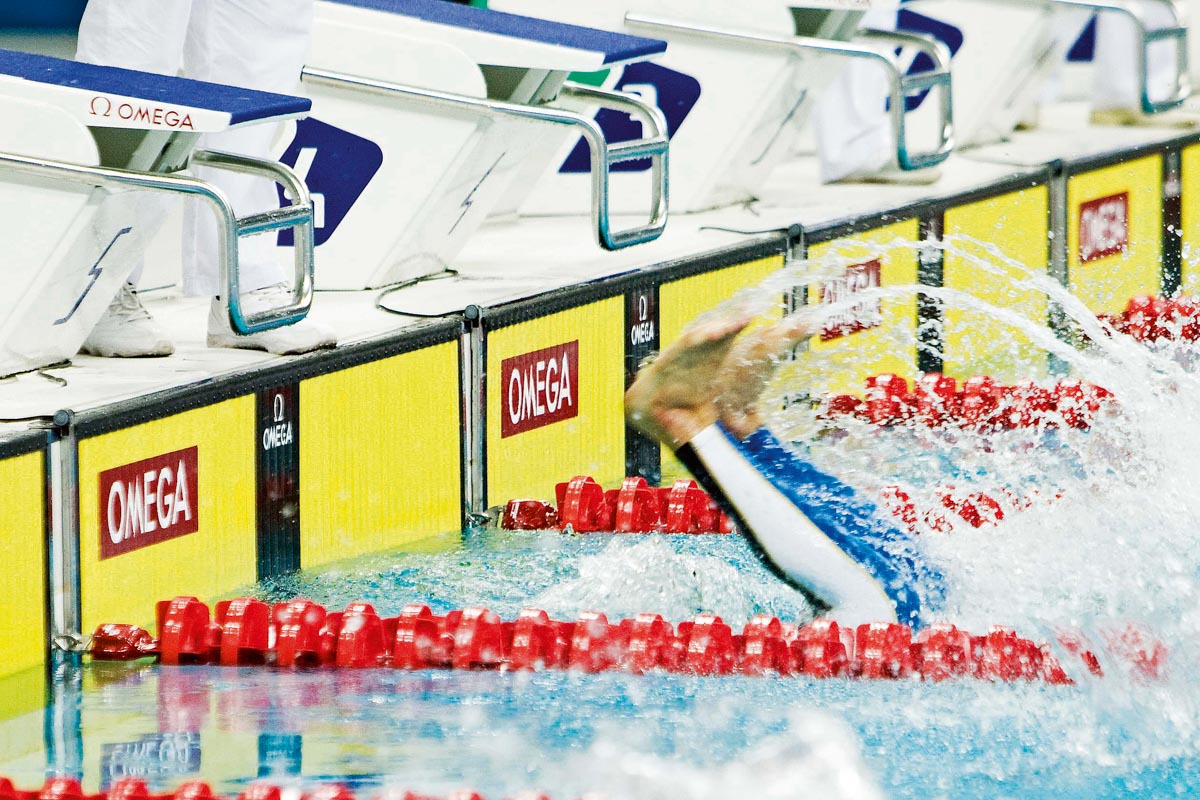 Its bright yellow pads were 90 by 240cm (about 3 by 8 feet) and two-thirds of the surface were immersed in water. They reacted to the slightest of touches, but were not disrupted or triggered by water, or the waves generated by the swimmers. Besides the swimming pads, Omega placed an Omega loudspeaker (no less) behind each starting block so that all swimmers would hear the signal at the same time. Finally, the Eight-O-Matic was replaced by the Swim-O-Matic, now accurate to the nearest 1/1000th of a second. 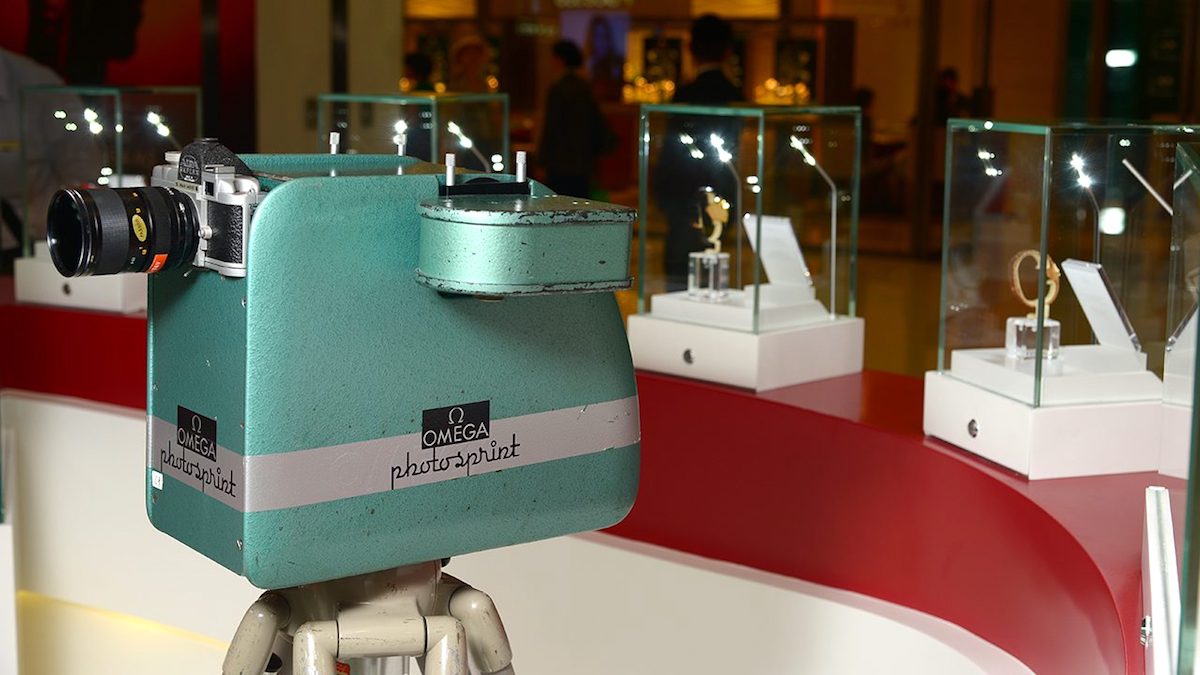 It was also here that Omega launched the Omega Photosprint – somehow they managed to squeeze this into their 8-ton shipment of gear that they sent to Mexico City to perform the timing of the 1968 Summer Games. The Omega Photosprint was used to film all runners as they crossed the finish line – the twist was that the camera featured a tiny vertical opening and included a film strip with the time written on it. This way time became linked with photography – film could be developed in under 30 seconds. The Photosprint ended up recording 10 of the total of 31 world records achieved at this Summer Games and has proven to serve as the basis of technology that would decide between winners and everyone else still used today. 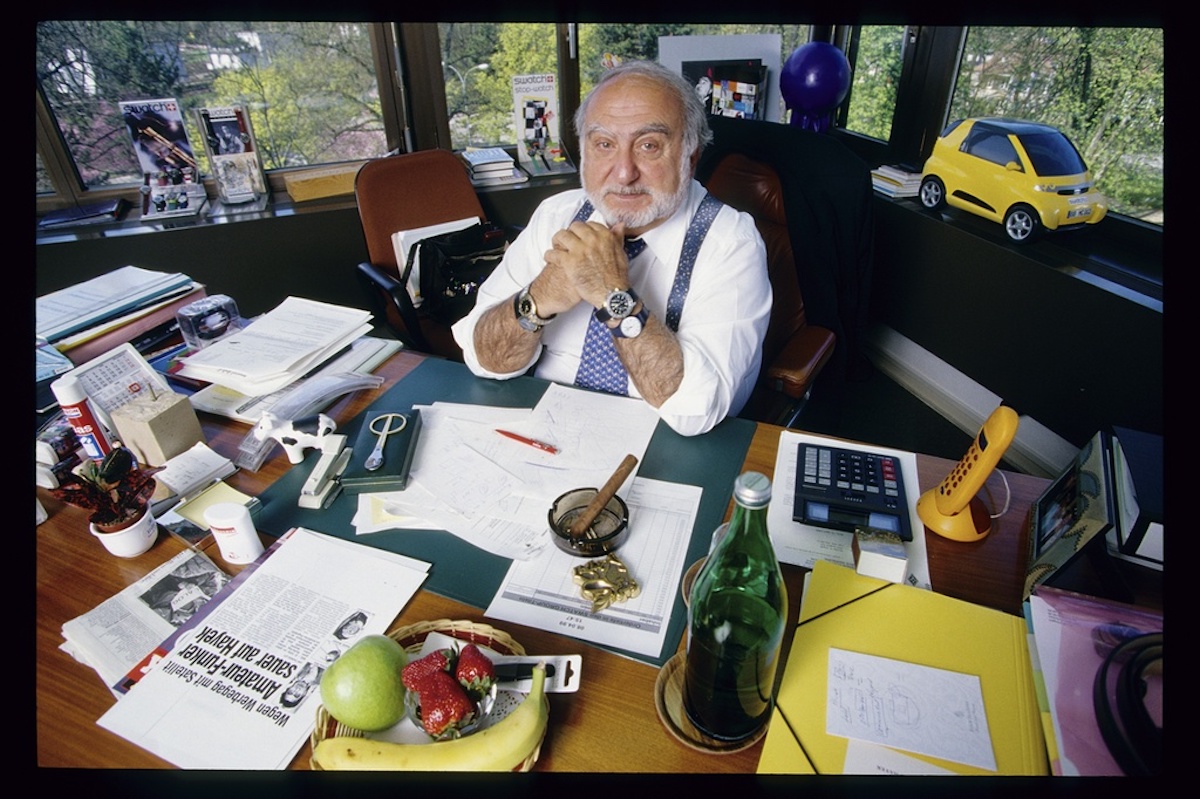 The quartz crisis we really can’t discuss here at any length (please check out my detailed ETA History feature article here), so in a nutshell we’ll say things weren’t exactly looking up for the Swiss watch industry in the ’70s and early ’80s and it was Hayek Sr. who took over the ASUAG-SSIH Group that comprised the majority of notable (and countless now forgotten) Swiss watch brands at the time. Here’s a quote edited from a 2006 interview:

“One day, the two most senior members of the ASUAG-SSIH Group came to me and suggested that Swiss Timing [the Group’s department specialized in Olympic Timekeeping] be closed down. The Olympic Games were costing us a pile of money, they said. I banged my fist on the table. ‘You want me to close down this department, let the people go, lose a tremendous amount of know-how and leave the way clear for our competitors? If we do that and then five years later suddenly decide we want to go back, we will be left with nothing.’ Timekeeping is an incredibly dynamic message for the Swiss watch industry, so incredible you can’t imagine. Sport is linked to emotion. It has an amazing impact on people. And it is right that Omega should do the Olympic Games. Omega has contributed a huge amount to the development of sports timekeeping since the very beginning. We should never, under any circumstances give up on our involvement.”

A starting block that, since Los Angeles, 1984, features a false start detection system.

In Los Angeles, 1984, Omega introduced the first false start detection system. The equipment was extremely sensitive: the runner’s reaction time was triggered once his leg exerted 29kg (27kg for women) of pressure against the block. This was then displayed to timekeepers on a decisive graph. The runner was not allowed to have moved until 0.100 seconds after the start signal, something that could at last be accurately measured and determined. At the same time, Omega started installing loudspeakers onto every individual starting block so that each runner could hear the sound at the exact same time. 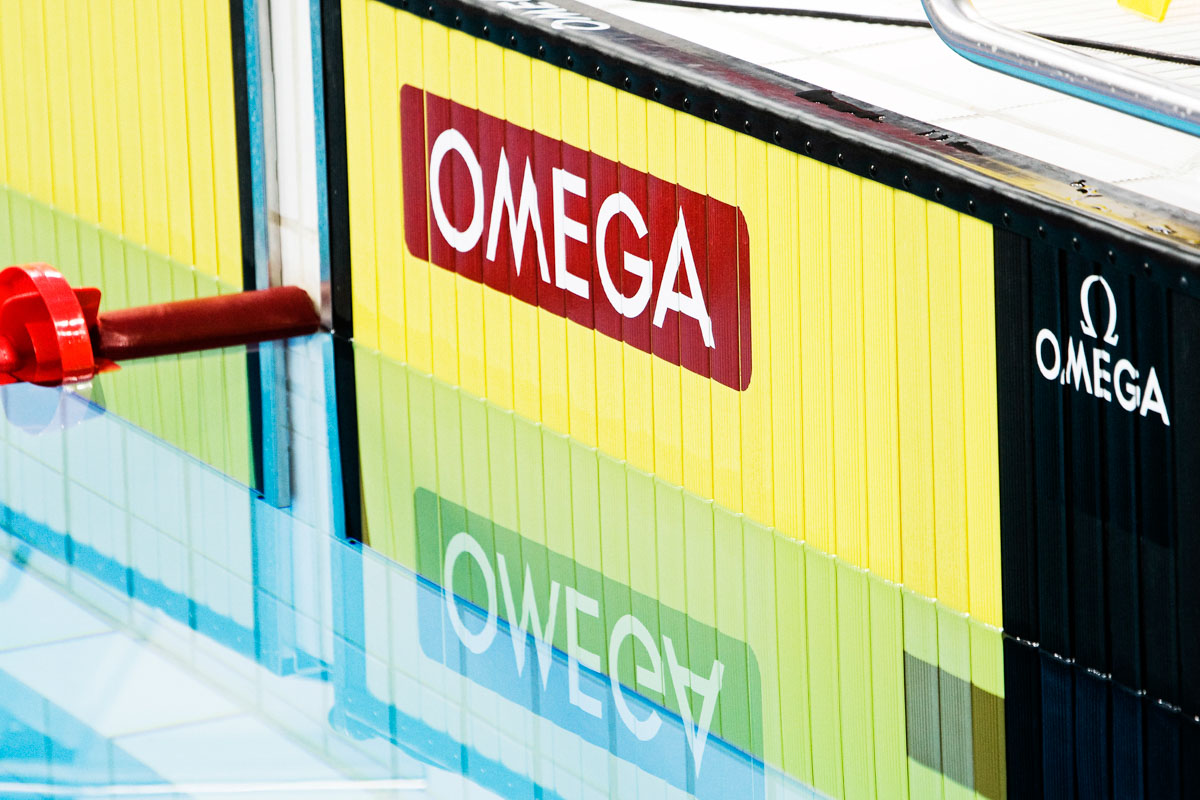 Seoul, 1988 was the first Olympic Summer Games with computerized timekeeping. Now, beyond merely measuring, allocating, and printing out times, Omega was also able to digitally store vital information and statistics. The new Omega video matrix board in Seoul was the first to provide images and videos in color. It measured 14 by 9 meters (45 by 27 feet) and it was supplemented by special scoreboards during walking and marathon events that were mounted on top of cars to project live times to spectators and competitors. Seoul, 1988 also saw the victory by the narrowest possible measurement in swimming, where Antony Nesty of Suriname won by 0.01 seconds in the 100 meter butterfly – the runner-up, USA’s Matt Biondi jokingly asked “What if I had grown my fingernails longer?” 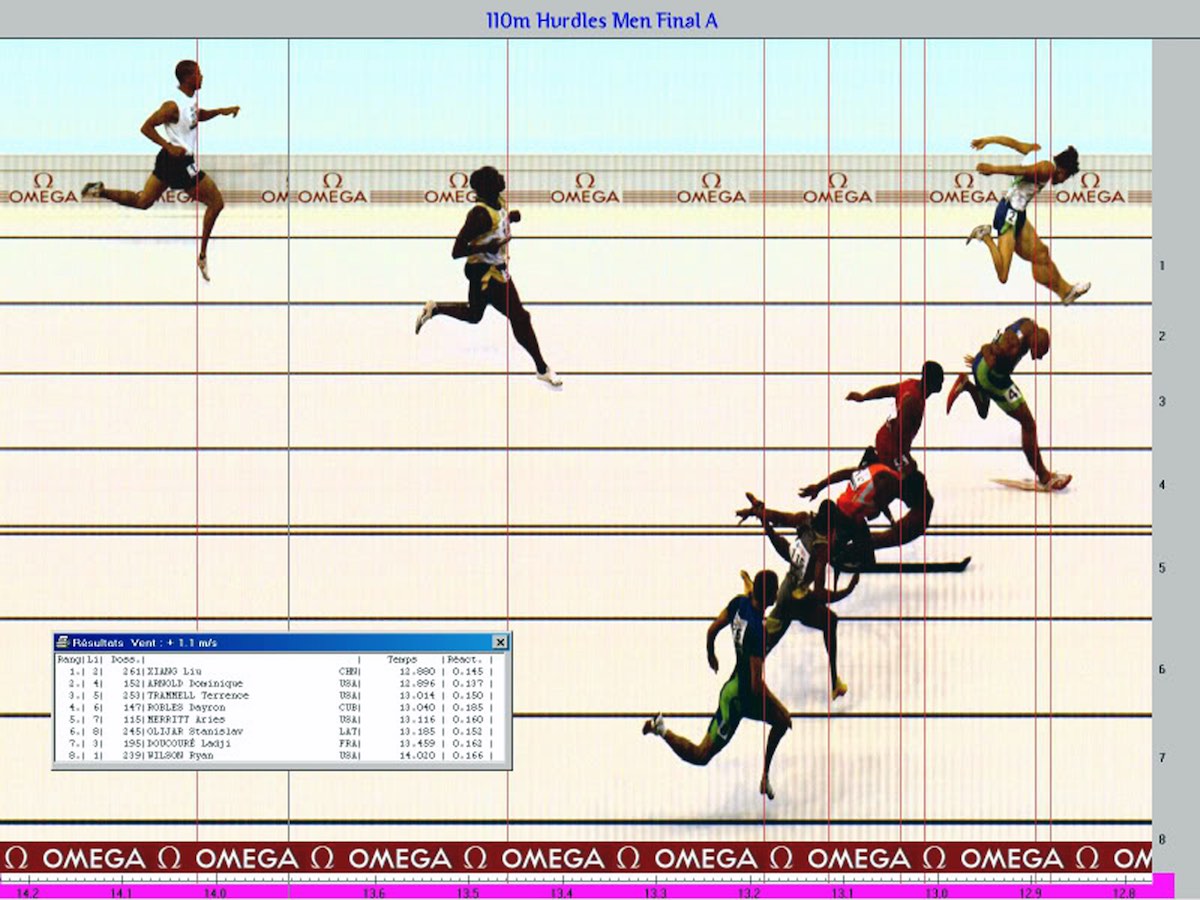 A Scan’O’Vision image taken with a more modern variant in color – you can still see the vertical lines near the lower right corner.

In Albertville, 1992, Omega introduced the Scan’O’Vision system to digitally measure times to the nearest 1/1000th of a second; it has gone on to become the best known version of the photo finish camera. Its system allows time to be photographed using linear vertical recording technology (CCD) along with an integrated timer.

The Scan’O’Vision produced images that appeared to have lines in it and that wasn’t faulty operation: the sine waves are created by the alternating currents which are invisible to the human eye, but are made visible by the electronic photo finish camera. Each vertical line represents a unit of time, depending on the frequency of local power. It is the variations in the power of the light generated by the alternating currents that are reflected in the picture. 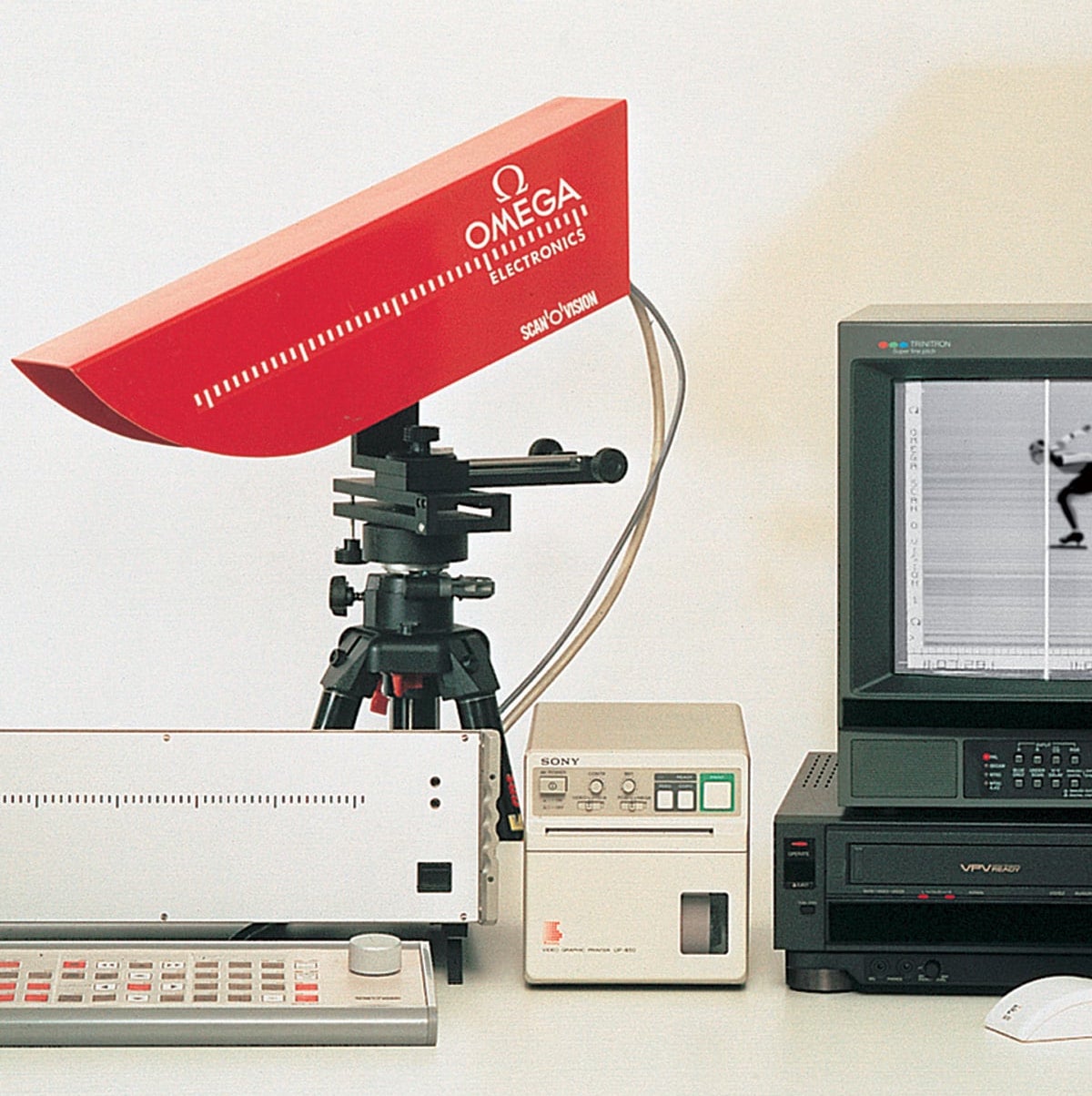 This Winter Games also saw the closest ever finish in men’s 1000 meter speed skating, where the first six (six!) finishers were all within 0.2 seconds of each other and even with the photo finish technology that allowed for the precise determination of the moment of finish, it was extremely difficult to make the call of who had won. In the end, Olaf Zinke of Germany was declared winner by the smallest possible margin of -0.01 seconds – the 3rd and 4th were also separated by 0.01 seconds. 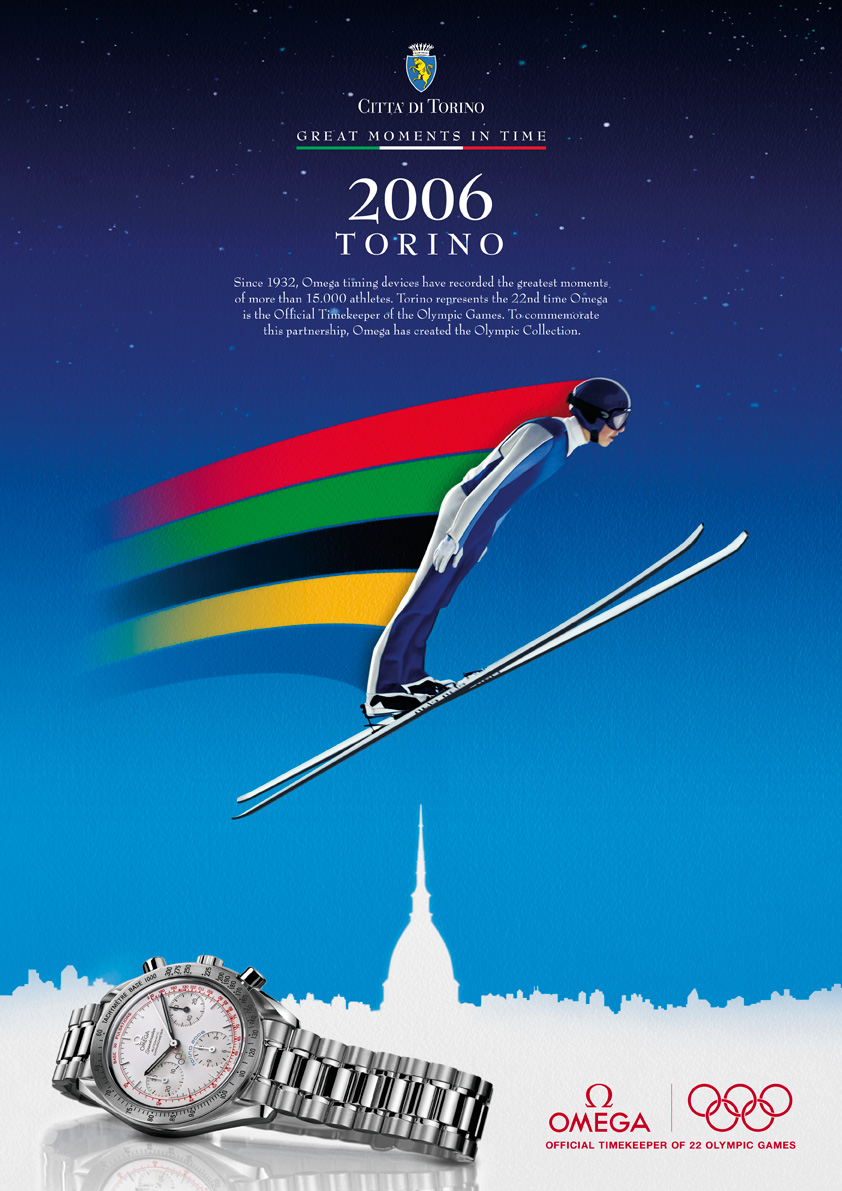 We should add that between 1996 and 2004, Omega had to take a step back as SMH Group’s decision was to push some of its other brands on the Olympics – it was in 2006, Torino, that Omega was restored in its position as the official timekeeper of all events. Oh, the crazy late ’90s and ’00s – much like most products and collections, clearly some marketing decisions also weren’t at their prime in this short chapter of the crazy-booming watch industry. Nevertheless, Omega did return in 2006 and return it did: with its 220 tons (!) of equipment, it had recorded 105,510 times along with 2,582 distances, 10,891 speeds, and 72,122 scores. This meant that Omega had a job to do every 4 seconds and it did all that without any timing controversy or challenges throughout the entire event. 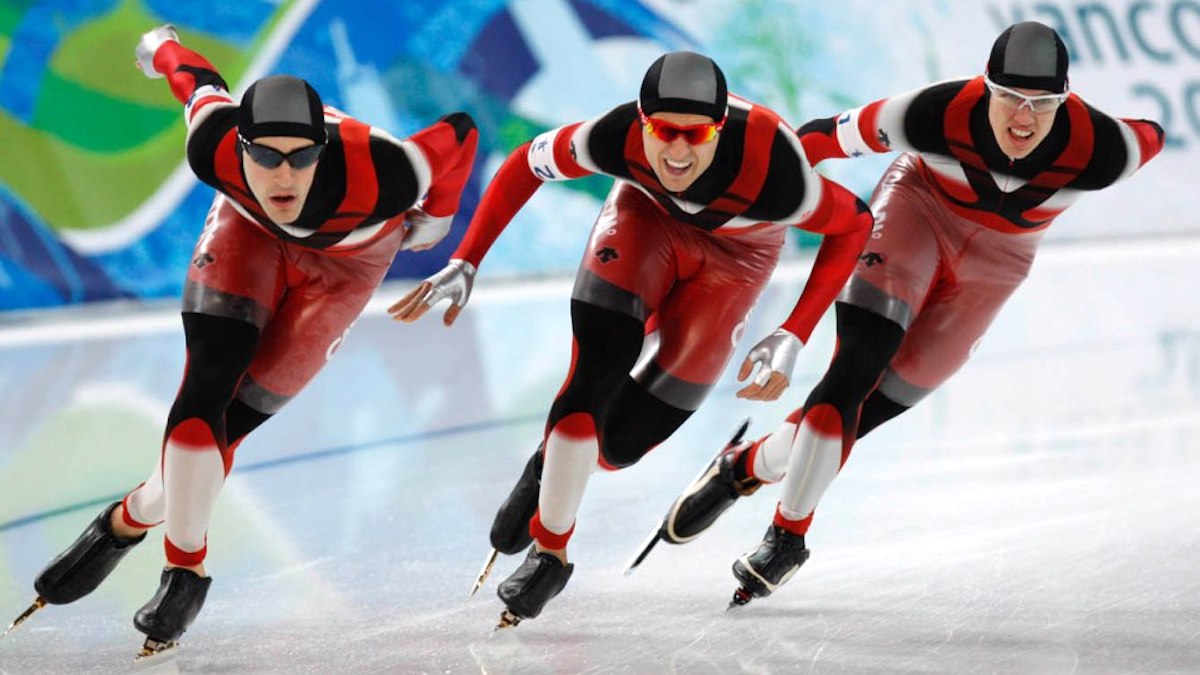 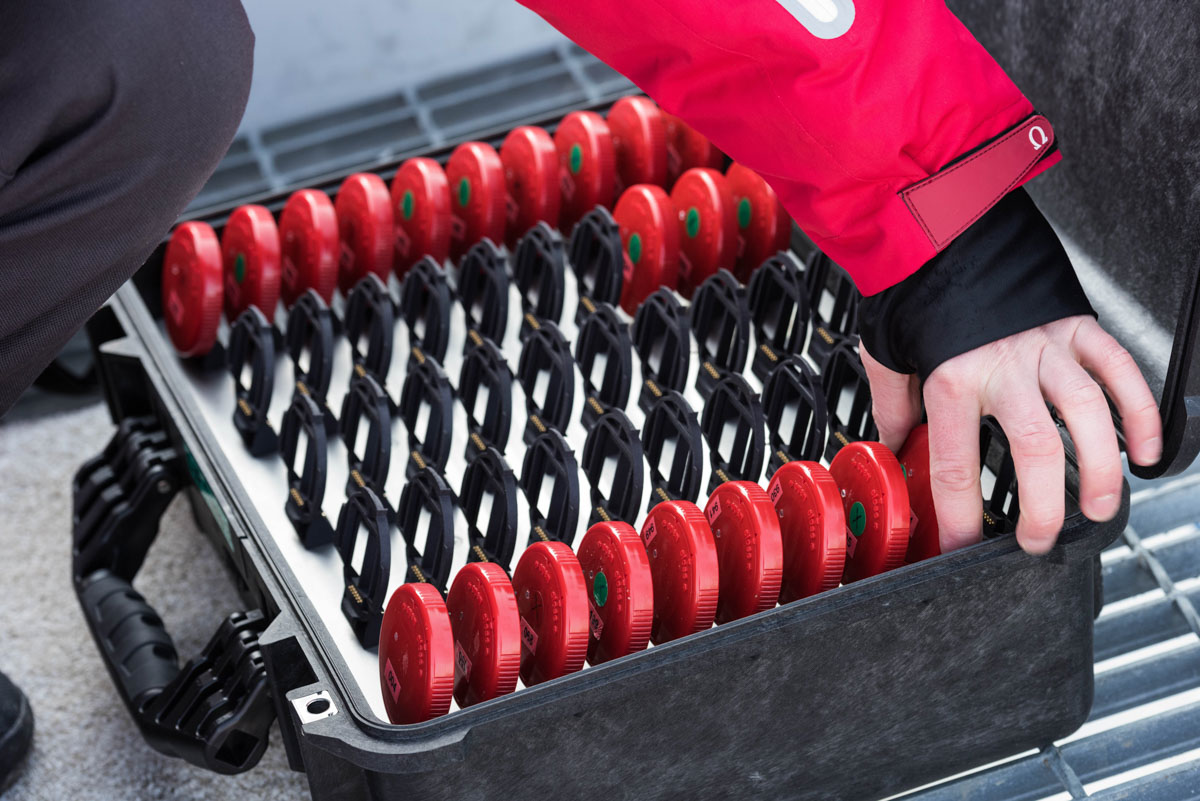 It was also here, in Torino (Turin) that Omega debuted its “Ankle Technology” for the team pursuit skating event – and with it the avenue of wearable technologies used during the Olympics had opened wide. The athletes would wear special transponders that were specifically designed to be as light and unobtrusive as possible, while also reliably performing the task of sending and receiving radio signals to allow for the capture of specific time measurements.