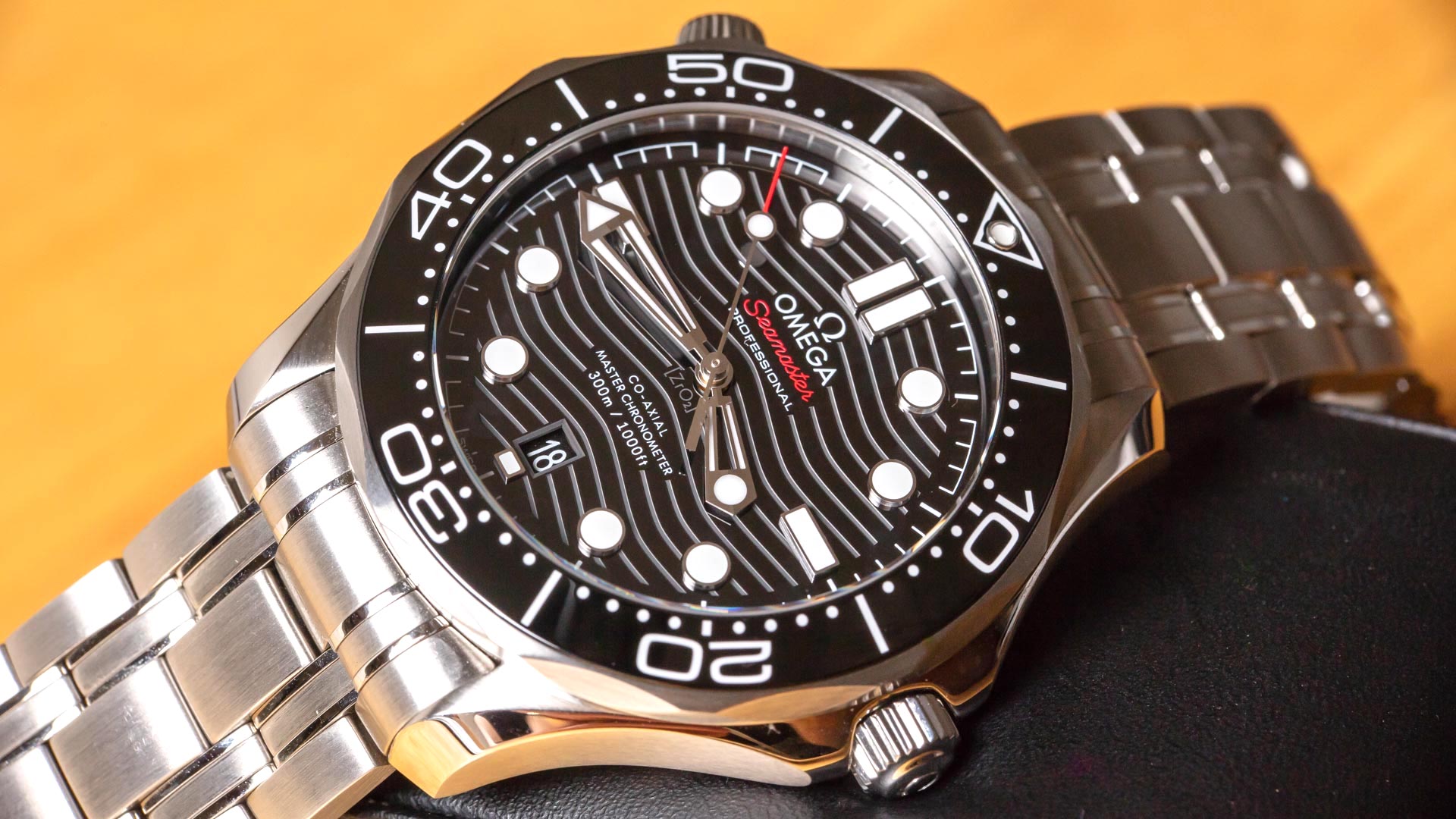 2018 saw Swiss Omega release an entirely updated Seamaster 300M diver watch collection (aBlogtoWatch hands-on here). The updated Seamaster 300M was intended to retain the core look and feel of the popular Omega diver’s watch while bringing the product’s technology and materials into the 21st century. This is the first Seamaster 300M watch collection to include a “Master Chronometer” certified in-house made Omega movement, which to me is a big part of keeping the “Professional” nature of this sports watch intact. Omega further has no shortage of Diver Seamaster 300M Co-Axial Master Chronometer 42mm (the official name of the watch) versions which includes this standard all-steel with black dial model to more exotic models with gold and ceramic. At the time of writing this watch review article, Omega has 15 different versions of the Seamaster 300M Co-Axial Master Chronometer on its website.

I chose to review this reference 210.30.42.20.01.001 “steel on steel” model with the black ceramic dial and bezel because in my opinion is represents the original, core look of the what the Seamaster 300M is to me. Originally released in 1993 when Jean-Claude Biver was at Omega, the Seamaster 300M sought to be a competitive alternative to the Rolex Submariner… that didn’t immediately look like a Rolex Submariner. Now about 25 years later I think many people will agree that the distinctive hand set along with hour markers continues to help the Seamaster 300M stand apart from the competition. The watch also has pricing on its side if judged alongside the Rolex Submariner. The retail price of this specific steel Seamaster 300M is under $5,000 and about $3,500 less than the Rolex Submariner. With that said, competition in the high-end dive watch space is extremely fierce and consumers today spending upwards of $4,000 on a sports dive watch are mostly seeking status and prestige as opposed to utility and style. 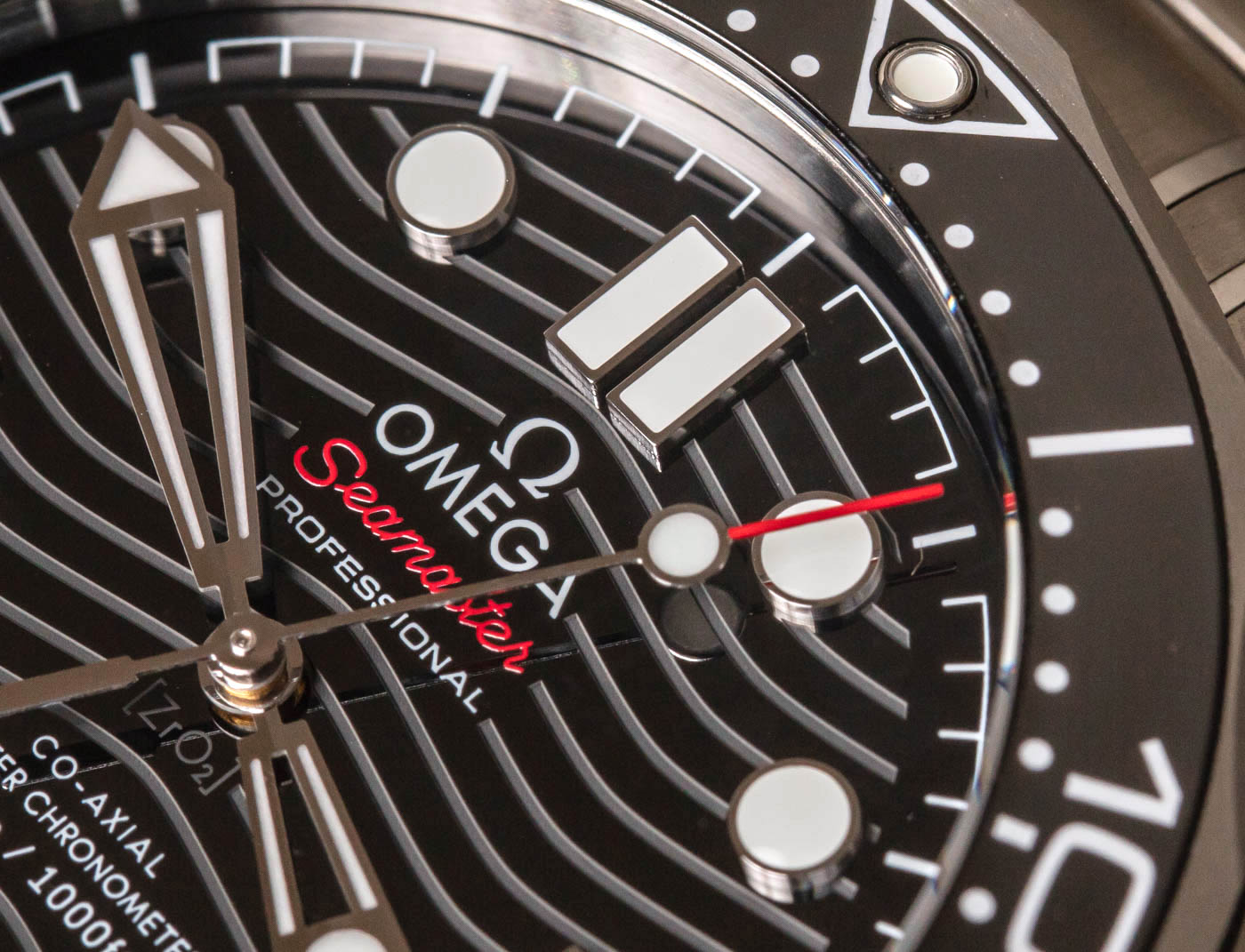 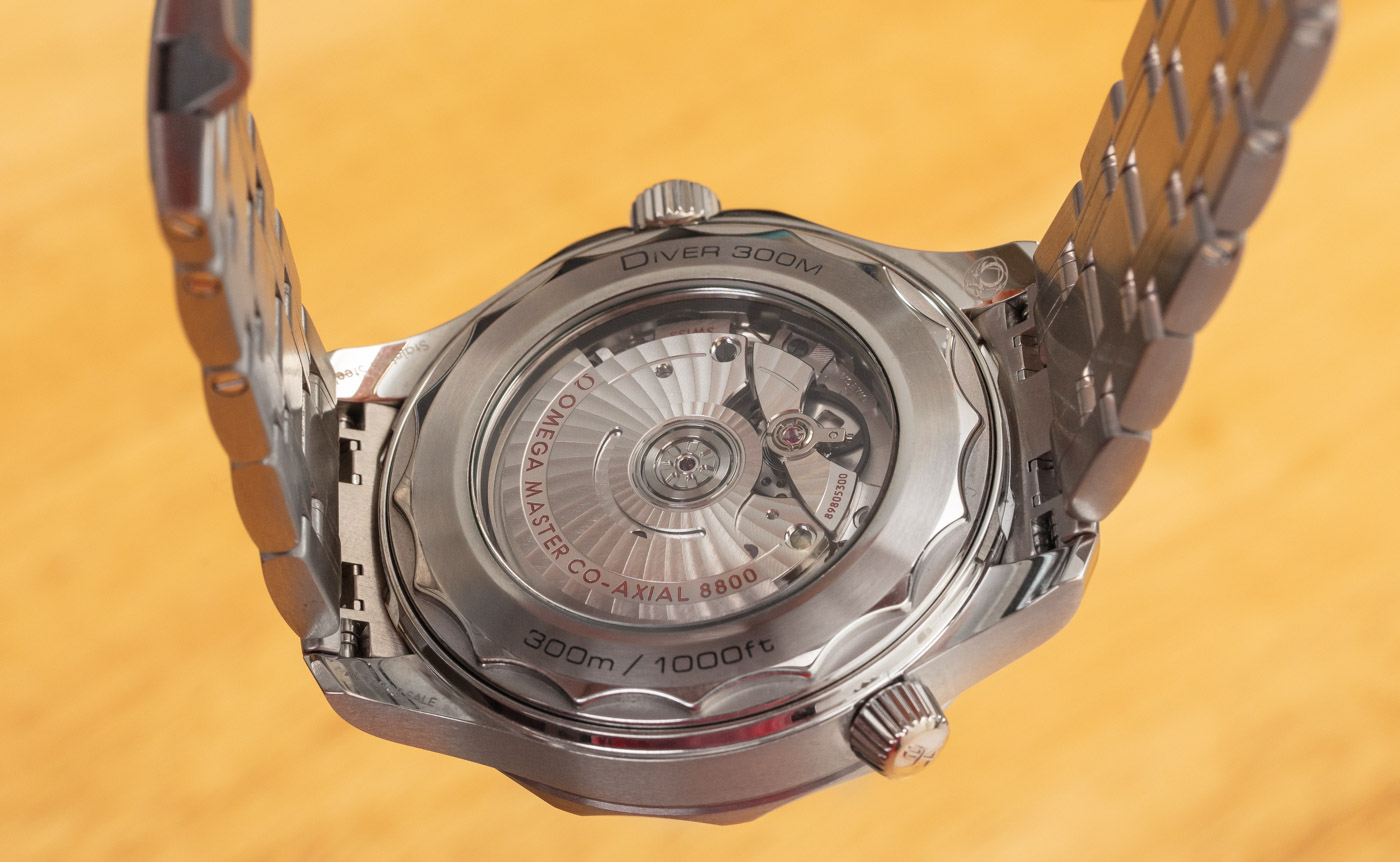 In the 1990s Omega’s popularity with the Seamaster 300M in large part hard to do with the collection’s very accessible pricing. By today’s standards the Seamaster 300M feels expensive – even though Omega has really upped the value proposition in terms of materials as well as the excellent in-house made caliber 8800 automatic movement. Starting with a Co-Axial escapement, the caliber 8800 is also (virtually) immune to the effects of environmental magnetism, features a reliable silicon balance spring, and boasts Omega’s impressive METAS Certification seal (which also include COSC Chronometer certification). Operating at 4Hz, the automatic movement has a power reserve of 55 hours and includes the time along with a date window complication. The result is an accurate, reliable, and very resilient mechanical movement – exactly what you’d want in a diver’s style timepiece. 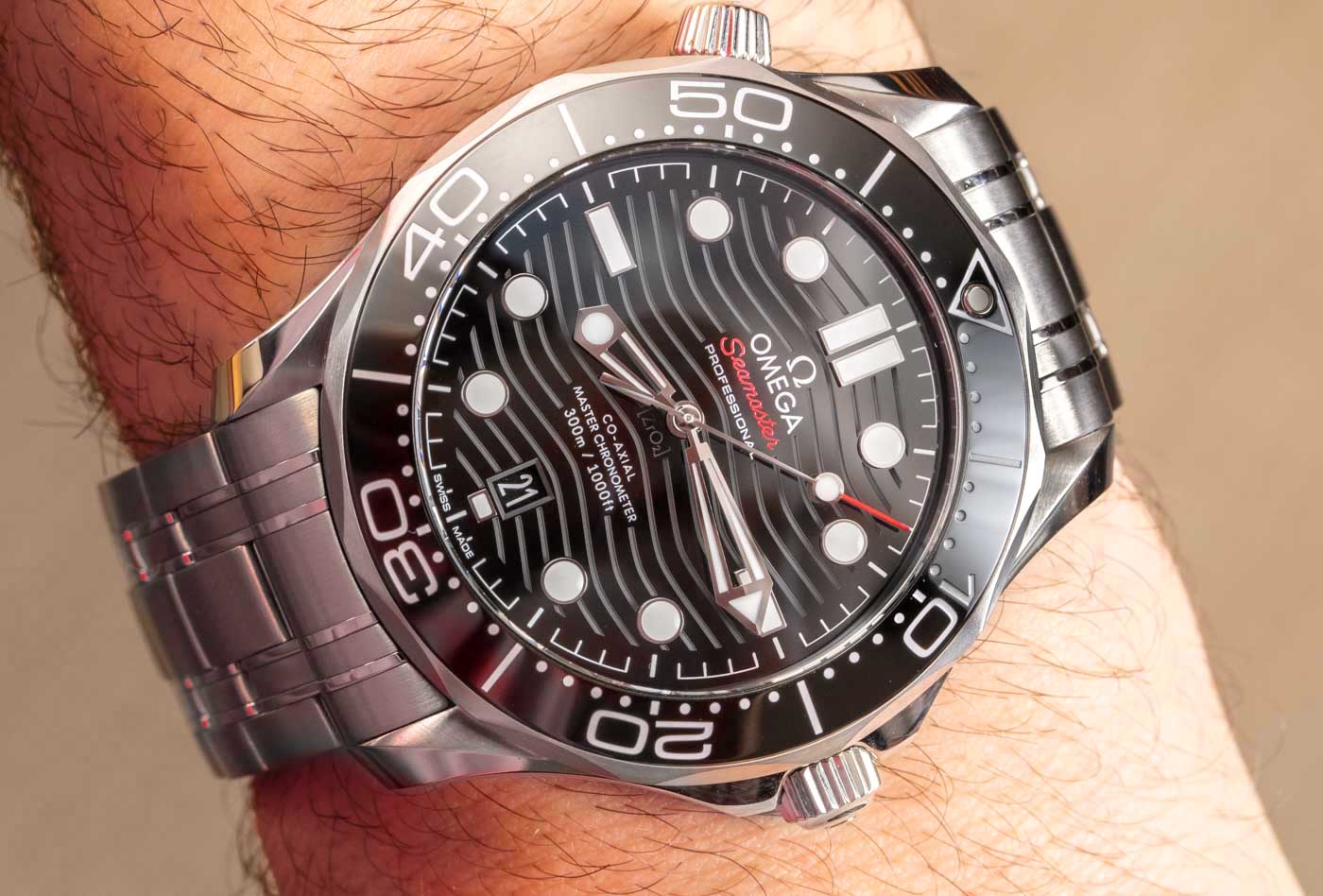 The newest generation of Seamaster 300M watch is slightly larger than the outgoing generation with a 42mm wide versus 41mm wide case. Water resistant to 300 meters, the case is about 12mm thick and has a roughly 50mm lug-to-lug distance. Wearing comfort is high, but it is a heavy and chunky watch – especially when paired with the metal bracelet. One of the most interesting albeit subtle updates to the case is the tapering of the helium release valve crown which is located at 10 o’clock on the case. This slight design tweak is a quick way to visually separate the new versus old generation Seamaster 300M models. 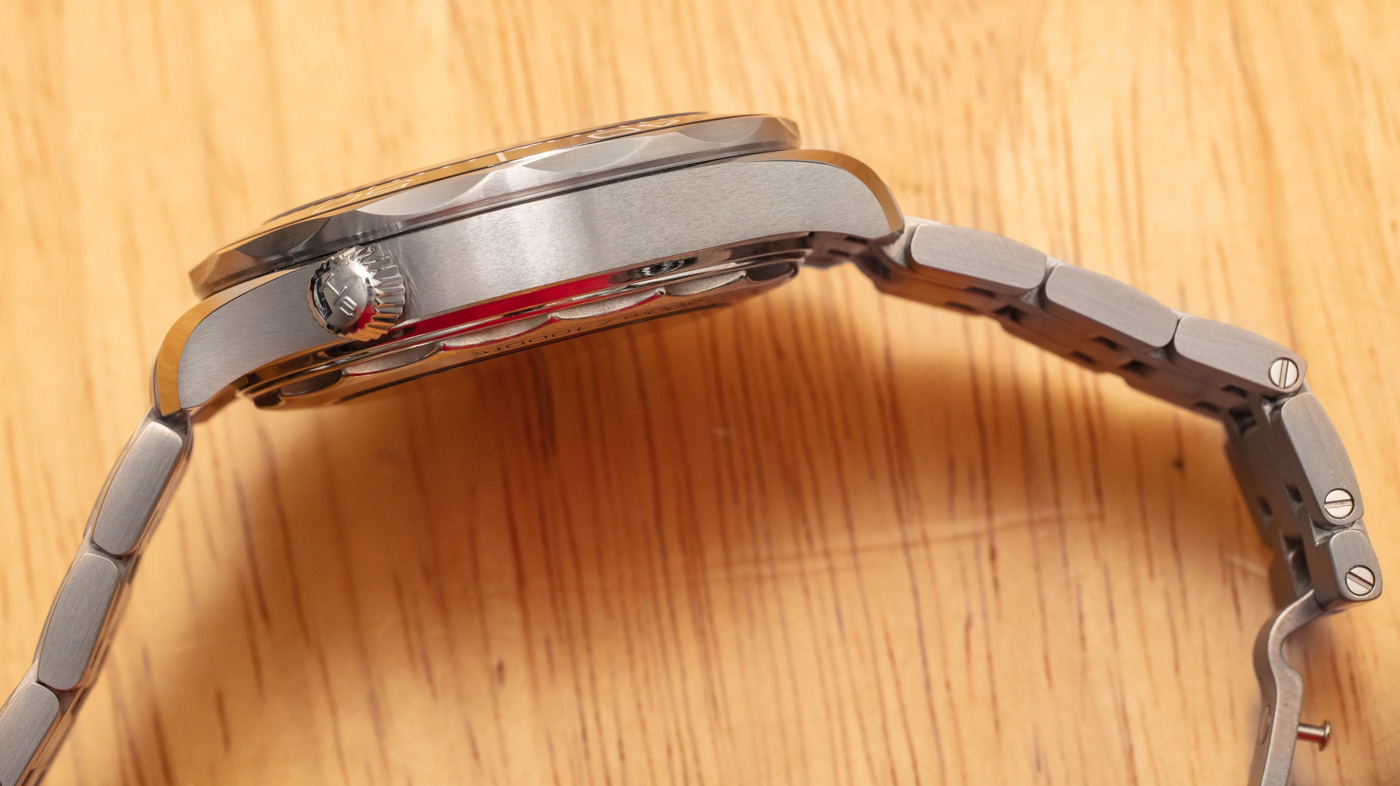 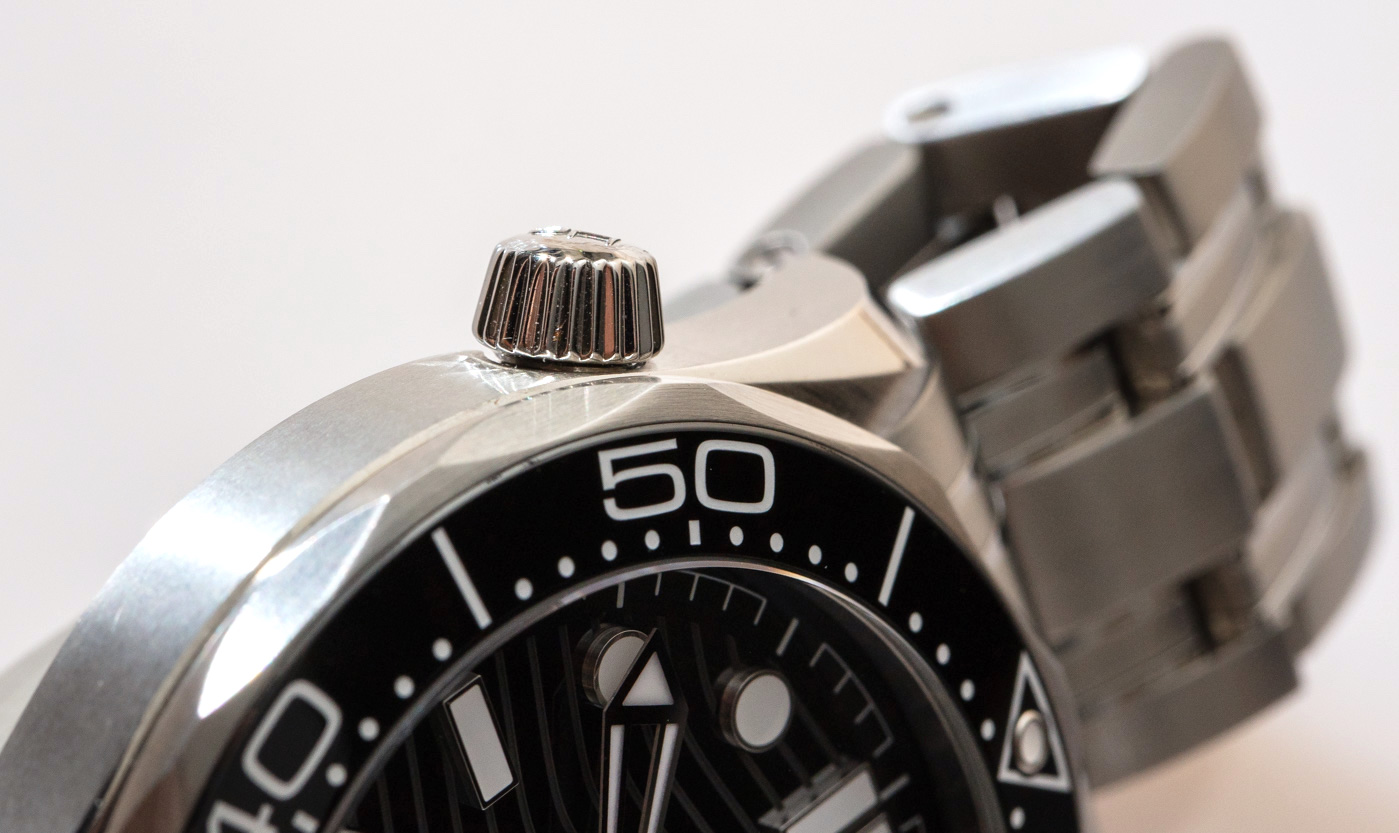 Manual helium release valves on dive watches are old school technology which are only needed in rather rare situations. If you are not a commercial diver you probably won’t ever have a need to use the helium release valve. Automatic helium release valves are a bit more useful, but again the valve itself is only useful when in decompression chambers. So why does Omega insist on keeping this vestigial element on what is supposed to be a modern-use high-end sports watch? Visual distinction is the answer. While not everyone even likes the look of this 10 o’clock crown, it does help visually distinguish the Omega Seamaster 300M from other dive watches out there. So while this is meant to be a legit “professional diver’s watch” it is also not without its “branding quirks” that take away from a product purely focused on streamlined utility. 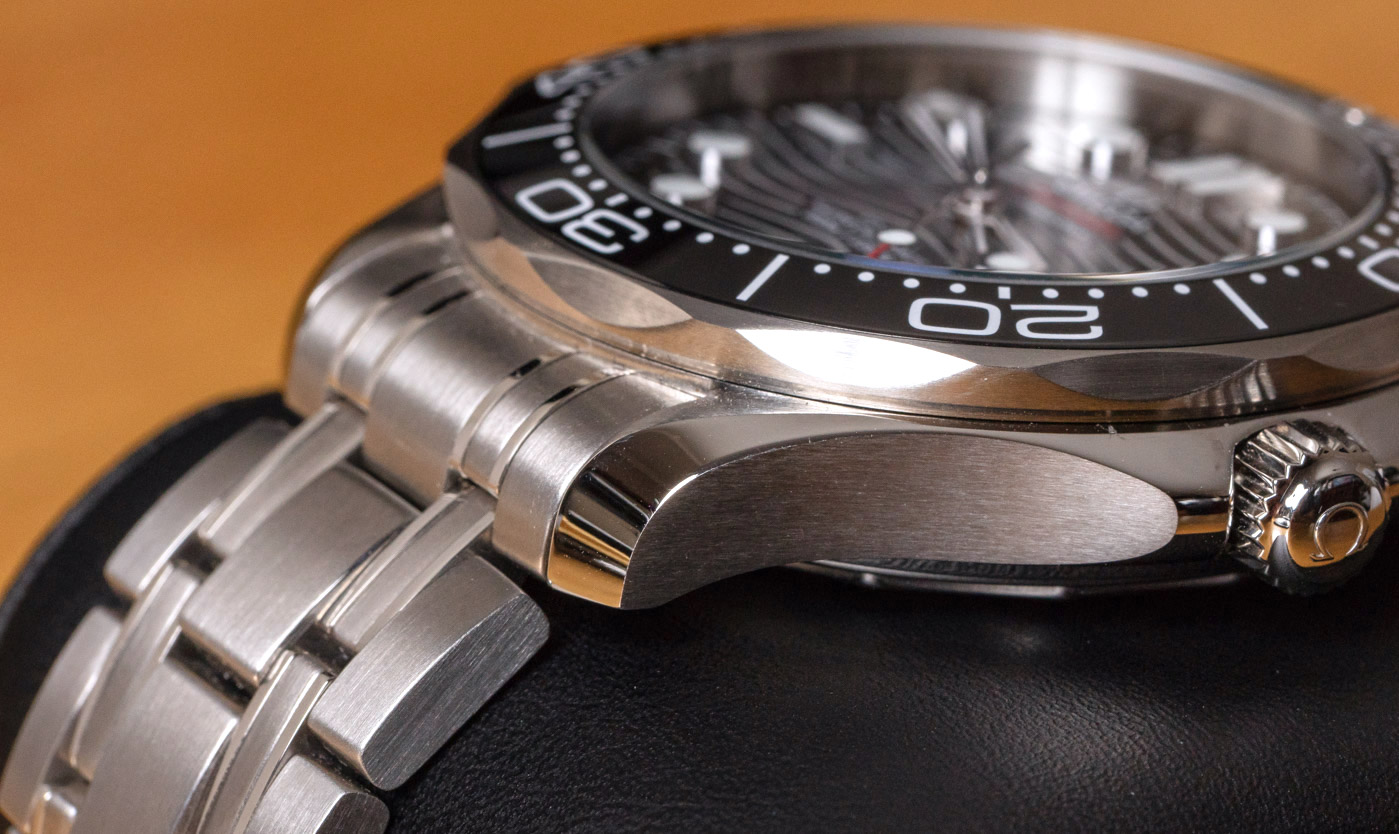 The beauty of the Seamaster 300M case overall – including its swoopy lugs and distinctive bezel design – continues to help the collection have style appeal as well as nostalgic appeal to high-end watch consumers today. Even more so than Omega’s other diver watches (such as the later introduced Seamaster Planet Ocean collection) the Seamaster 300M has also represented a entry-level tool watch side to the brand. It was the brand’s authentic professional diver’s watch with only the smallest element of luxury fluff to help justify its high-end persona. It was always meant to the the Speedmaster of dive watch – which means it by design is more about function and utility than purely form and style. The question for me in regard to this 2018 and later Seamaster 300M is if it retains this character? In some ways yes, but in other important ways no. 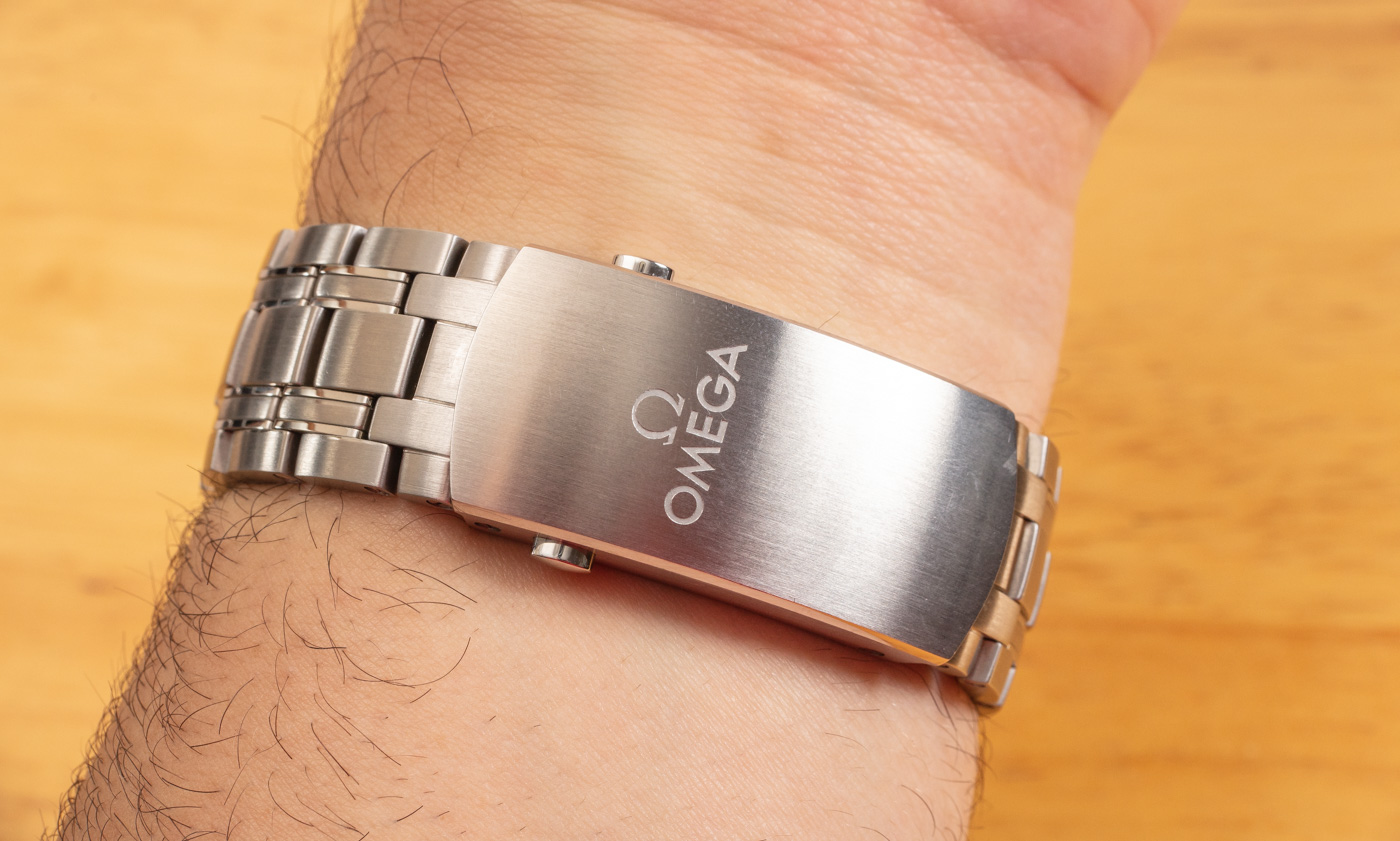 Omega has remade the original 300M watch with the exact same sensibilities as the 1993 model as though it came out today. That means that Omega made a better vintage watch as opposed to making a better dive watch for today’s professional divers… that is still an “Omega.” If you’ve always like the original Seamaster 300M and want a refreshed experience with it – then this timepiece will easily satisfy you. If you are seeking a modern dive watch experience from Omega, aside from arguably the movement, this is a retro watch in freshly made skin. 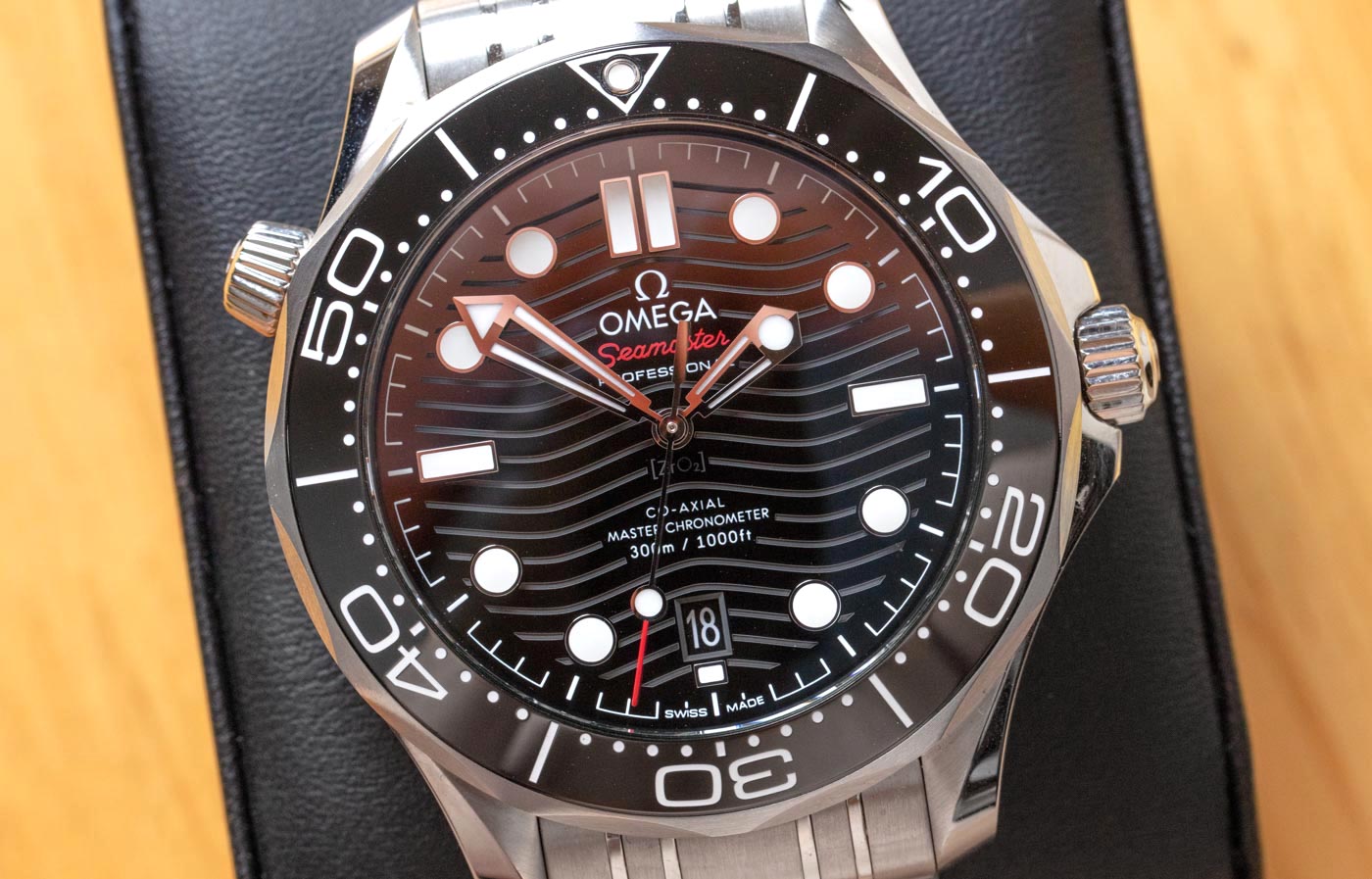 Let’s talk about the dial for a little bit. Legibility is truly fantastic because the hands and hour markers are as large as they can be and also high (relatively speaking) off the dial. The applied hour makers and hands also have a polish which really picks up light and helps them contrast well with the black ceramic dial. The ironic result is that because this dial picks up light and reflects it, it ends up being more legible. Usually the opposite is true because light causes blurring and glare which makes dials less visible. 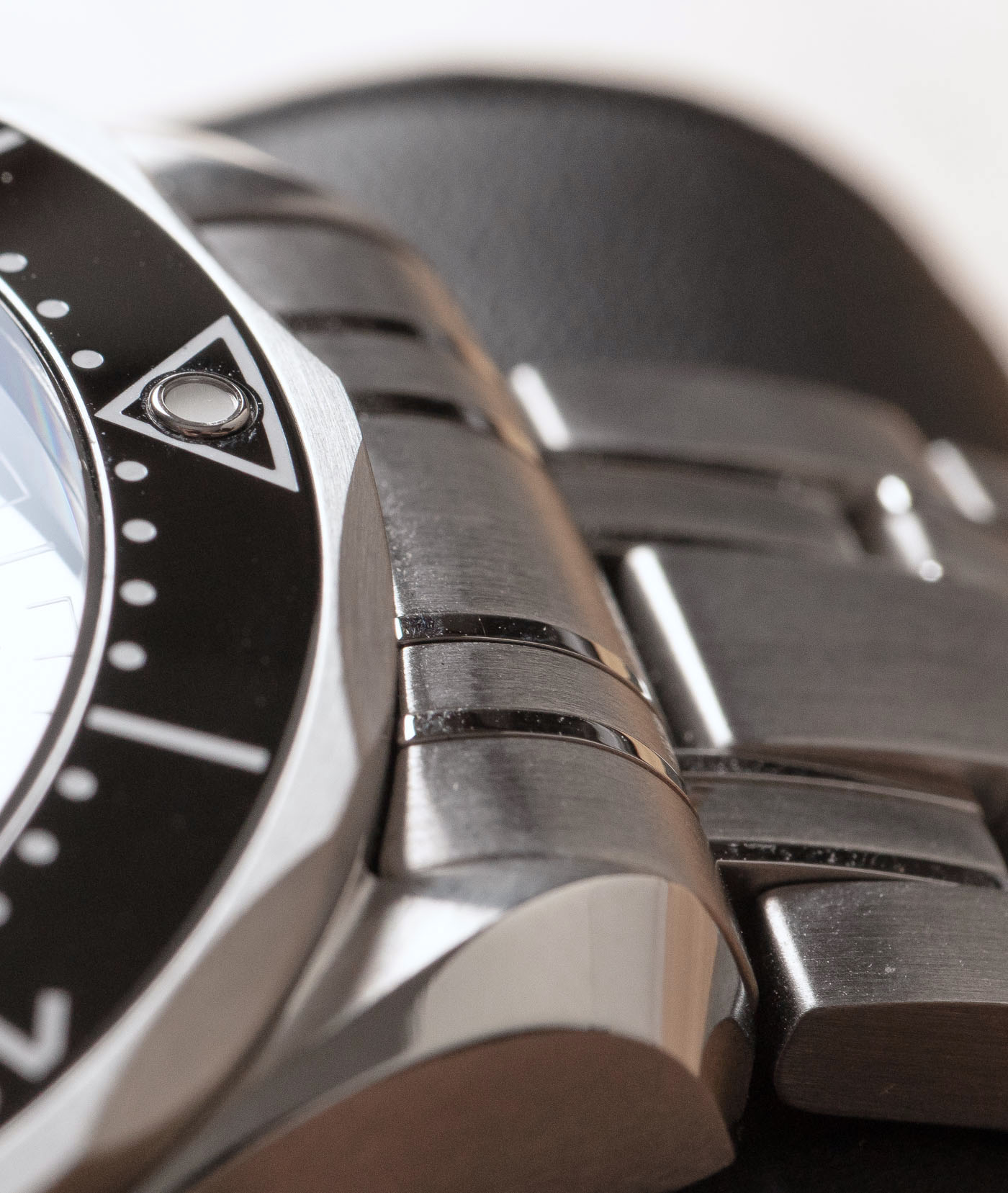 A very real upgrade to the case over the previous generation Seamaster 300M is the bezel rotation tactility. Inside the bezel is a ceramic insert, which in addition to black comes in other colors such as blue for other models. The Seamaster 300M Co-Axial Master Chronometer case also has a sapphire crystal exhibition caseback which is new for the Seamaster 300M. Omega offers version of the watch on both a steel bracelet or a rubber strap. I’m usually a bracelet guy, but I actually recommend considering the strap option. Let me discuss why. 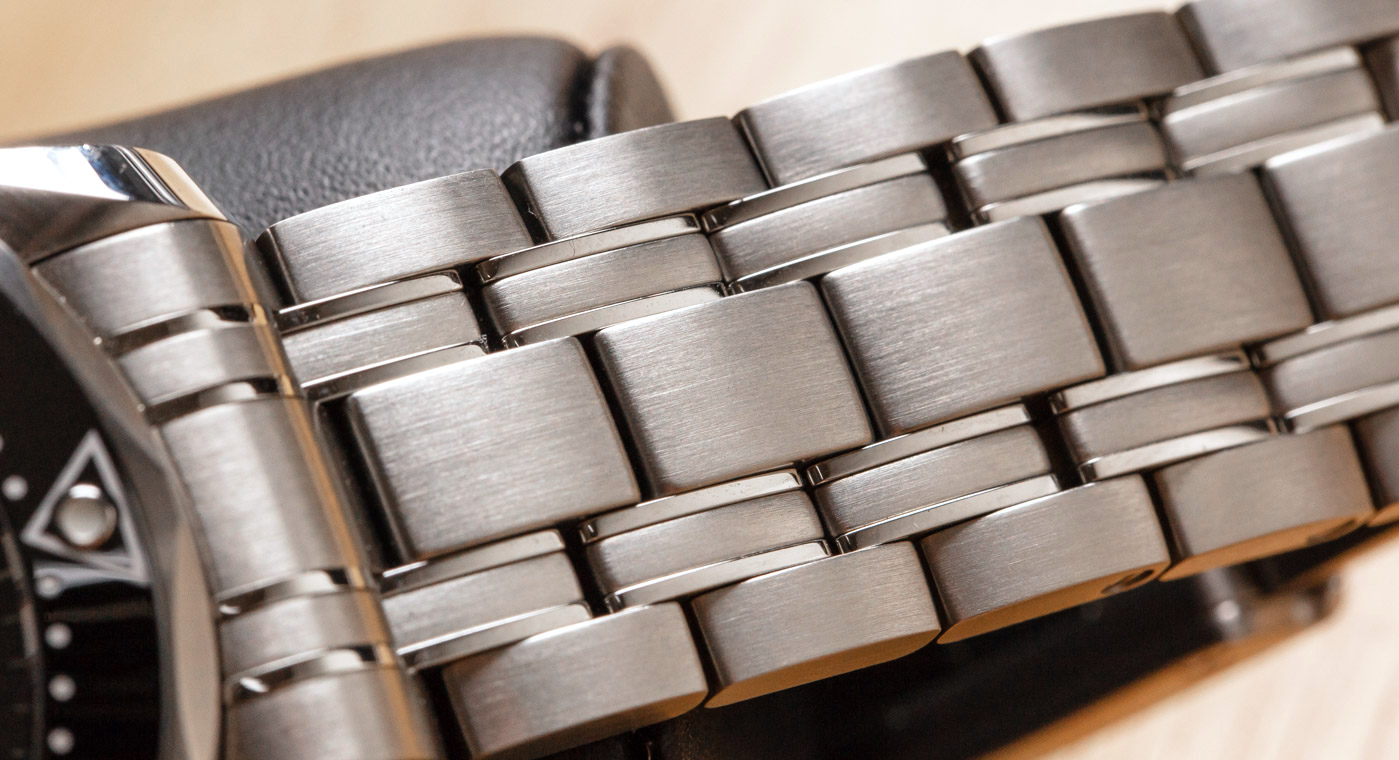 Omega’s Seamaster 300M bracelet has not been much enhanced for the new generation of watches. The core design is still an offshoot of the Speedmaster bracelet and has only really been augmented with Omega’s useful micro-adjust delpoyant clasp. The bracelet is fine but its not a looker and its never going to beat the Rolex Submariner bracelet in a contest. This new generation Seamaster 300M bracelet is more fluid than the original and certainly better made. It isn’t however the world’s best looking bracelet in my opinion and also doesn’t wear as comfortably or elegantly as it might if it was designed differently. The available rubber strap for the Seamaster 300M doesn’t just wear much more comfortably on the wrist, but it helps show off the case’s attractive lug design all the better. 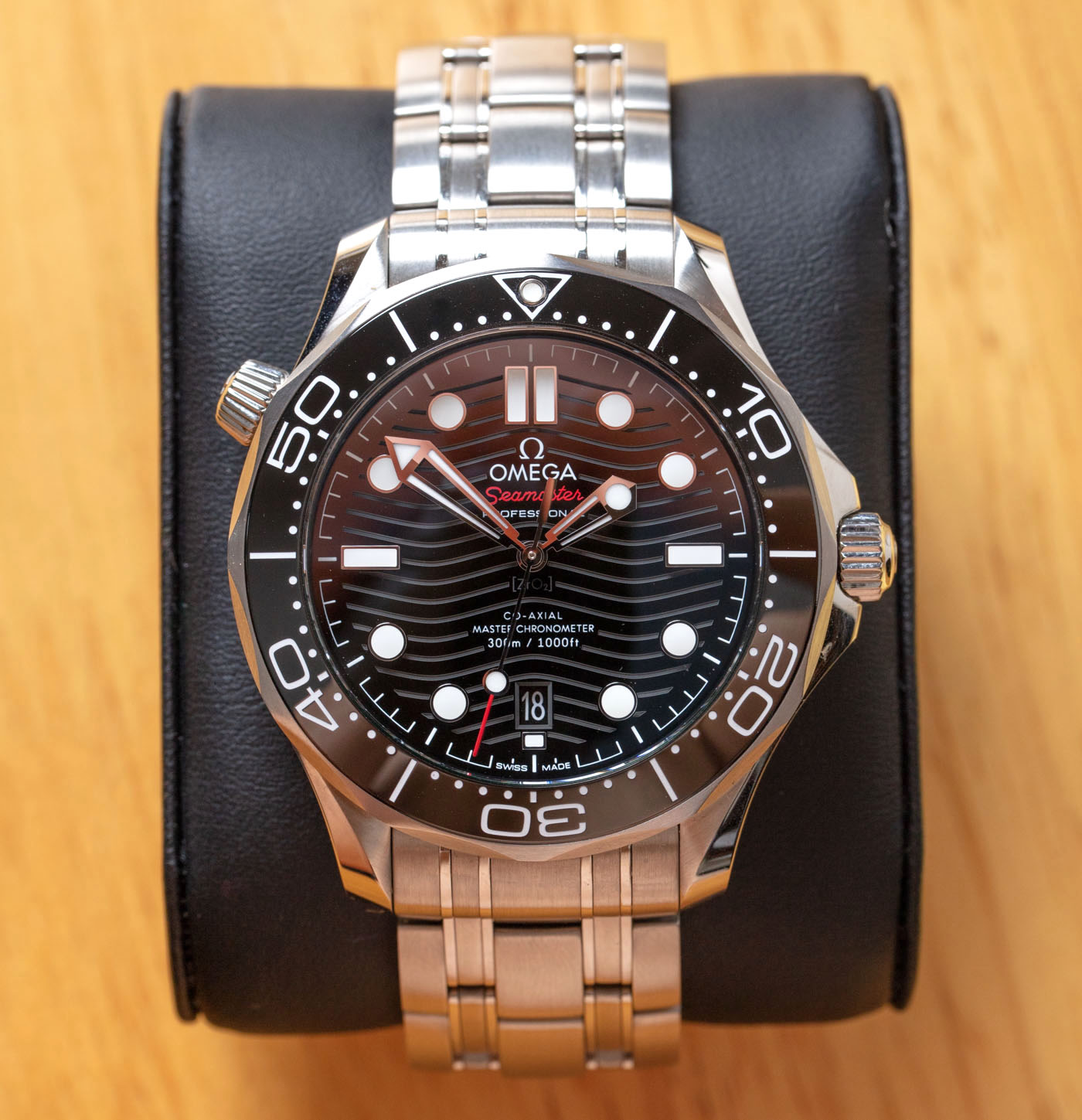 You can opt for some fancy Omega Seamaster 300M Co-Axial Master Chronometer watches right now with 18k Sedna or yellow gold accents and a ceramic and titanium model. The collection is sure to be updated with more models including the popular titanium Seamaster 300M watches of the past. As a late fan of the original Seamaster 300M watches I admire Omega’s expert ability to remake their early 1990s brand success with an even better version of the original. What Omega failed to do however was place the Seamaster 300M into today’s generation of watch lover in terms of relevancy or place of distinction. While the 1990s was not that long ago, in a real sense this is another “retro-refreshed” model by Omega. A lot of collectors  want that from the brand and we admire their tenacity in doing so. What Omega needs to do next is fill the void they have which is “what is our diver’s watch of today?” Perhaps that is just the Planet Ocean, but with its higher-prices such a piece will not appeal to watch lovers who want a diving watch equivalent of the Speedmaster. 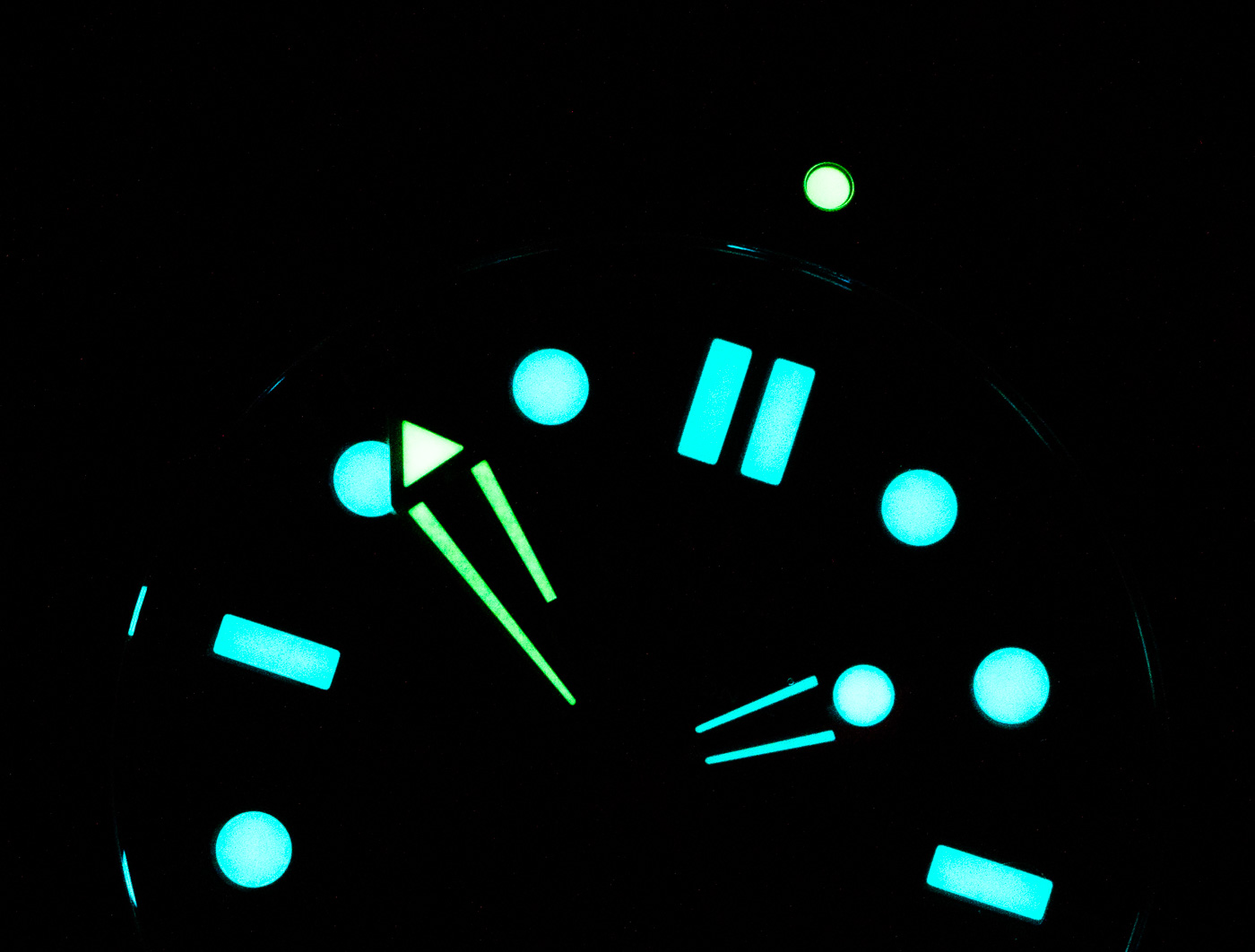 Even as a now-retro-styled tool watch the Omega Seamaster 300M performs well. It does all the things a good dive watch should, and  also boasts great legibility as well as a gracefully aging design. Price-wise it is a good entry point in the better sport watches by Omega, and is competitively priced when compared with direct competition from other Swiss brands with in-house movement-based lifestyle diver’s watches. Price for this reference 210.30.42.20.01.001 Omega Seamaster 300m Co-Axial Master Chronometer 42mm watch is $4,850 USD. Learn more at the Omega watches website here.

Necessary Data
>Brand: Omega
>Model: Seamaster 300m Co-Axial Master Chronometer 42mm reference 210.30.42.20.01.001
>Price: $4,850 USD (as tested)
>Size: 42mm wide, about 12mm thick, and about 50mm lug-to-lug distance.
>When reviewer would personally wear it: As a good-looking casual everyday sports watch that doesn’t mind getting wet or dirty if the occasion calls for it.
>Friend we’d recommend it to first: Watch enthusiast who has never or has not in the last 20 years experienced the Seamaster 300M collection and is keen to see how this distinctive diver matches their personality.
>Best characteristic of watch: Omega legitimately improved on the design and construction of the original Seamaster 300M in a product that is very much faithful to the original. Dial legibility and movement features are great.
>Worst characteristic of watch: Bracelet isn’t the best looker and watch might be best on a strap. Helium release valve doesn’t try to hide its vestigial nature.