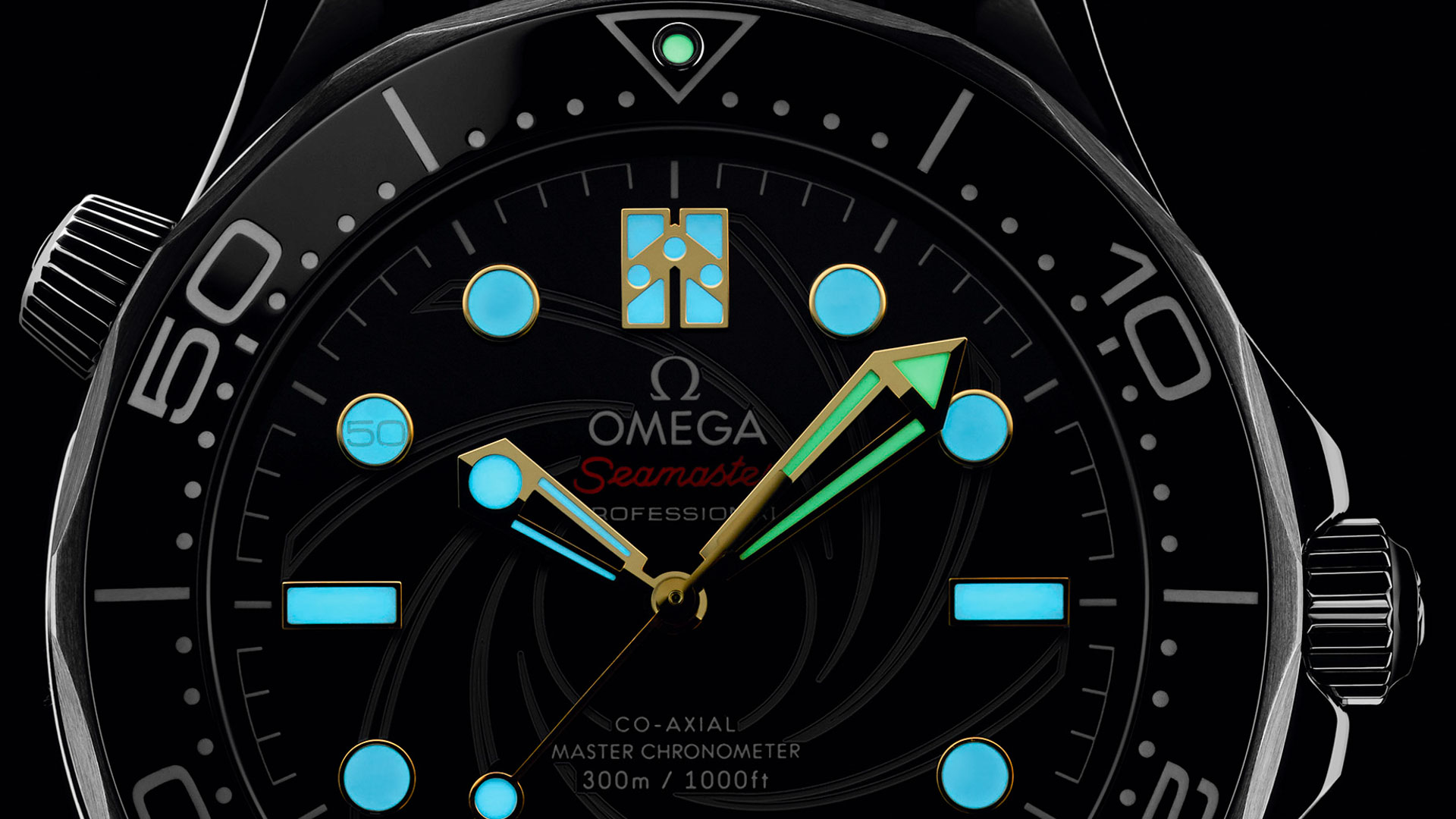 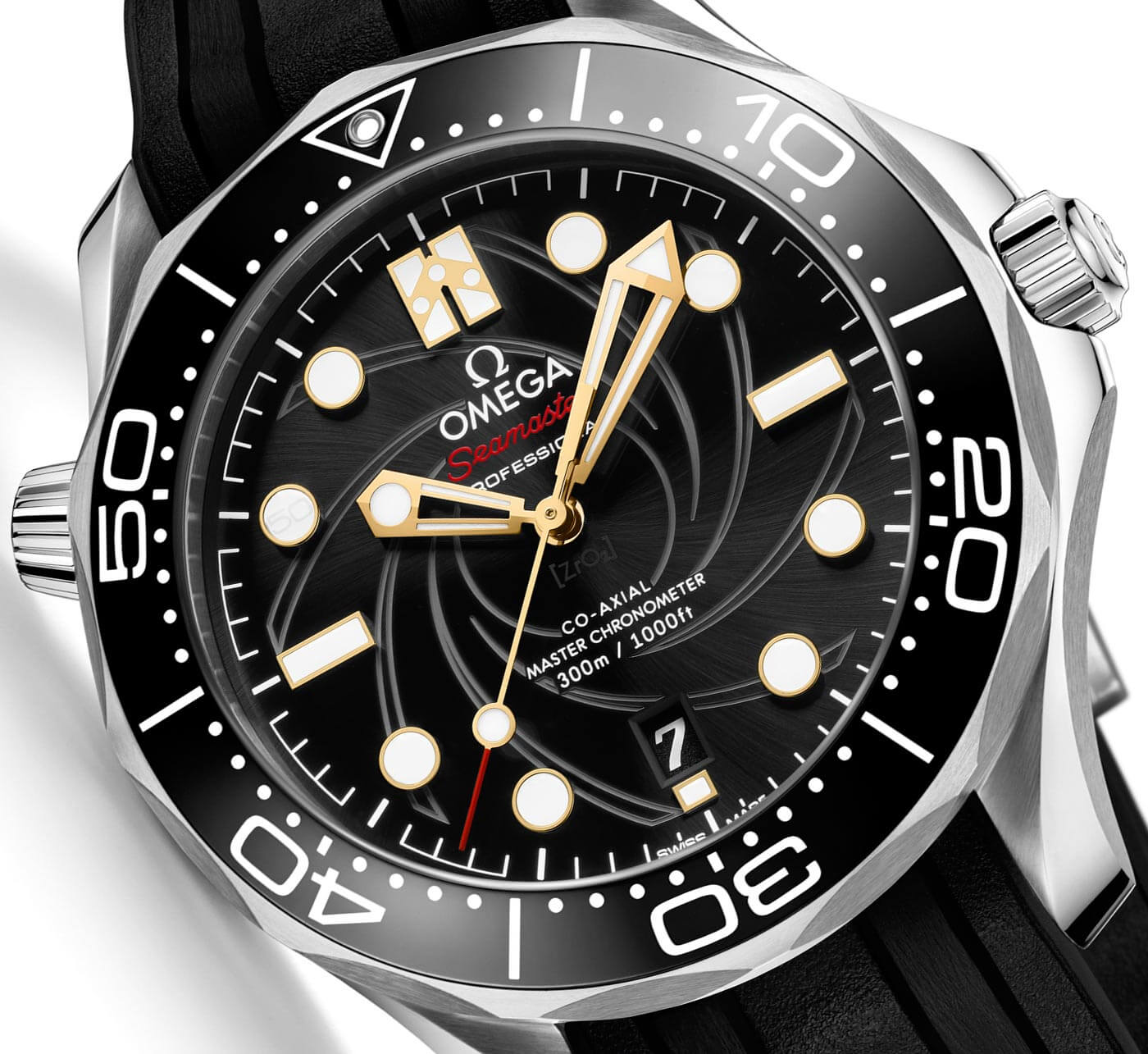 Fresh off the press is a new Omega Seamaster dedicated to James Bond, Agent 007. The latest Omega Seamaster Diver 300M 007 James Bond On Her Majesty’s Secret Service is presented for the 50th anniversary of the sixth movie in the James Bond Series. Whether you are a fan of that specific movie, James Bond, or “just” the Seamaster, this reference 210.22.42.20.01.004 is packed with interesting details that you’ll want to know about, so let us discover them now. 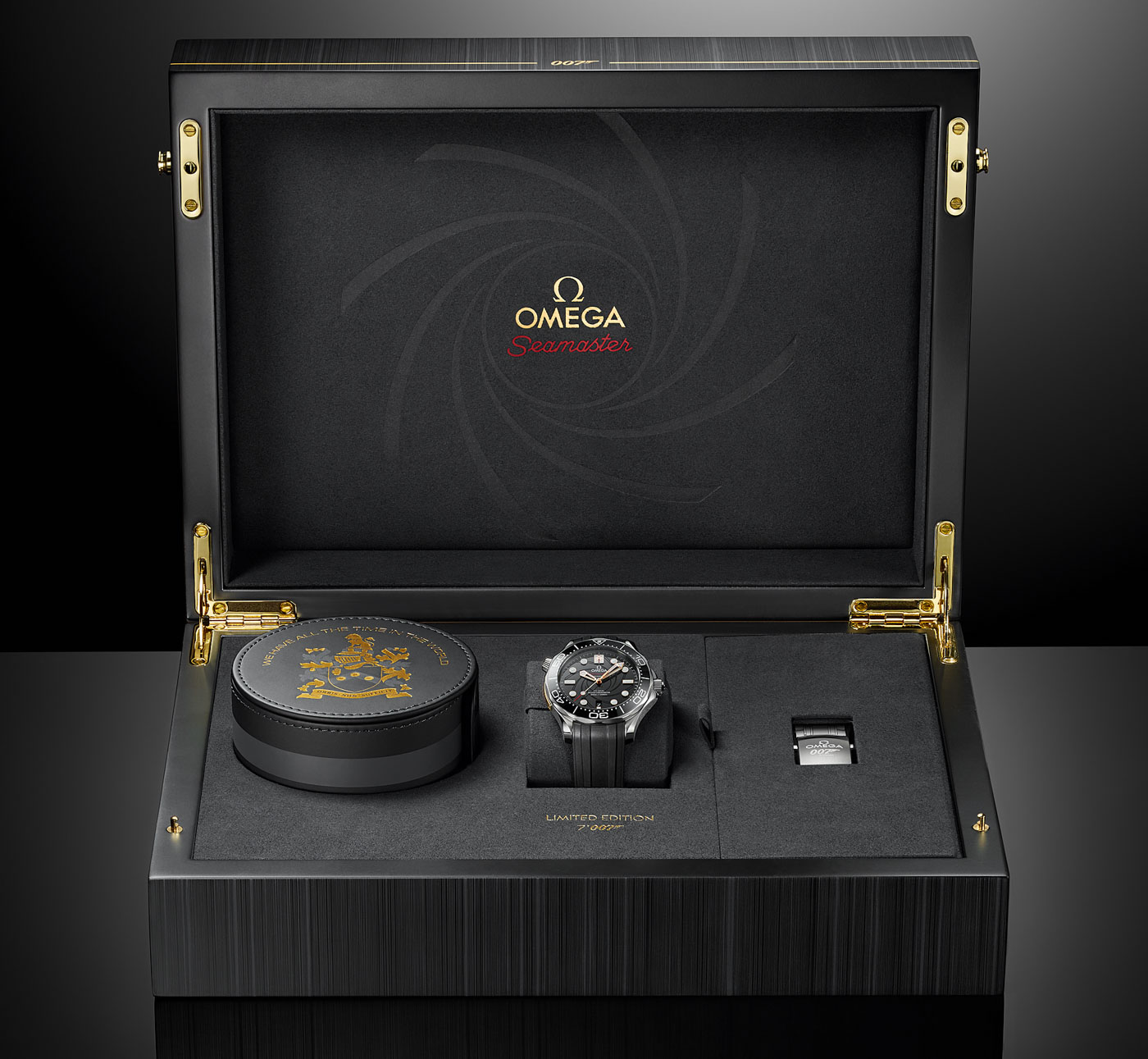 Omega has been the official watch of James Bond ever since 1995, beginning with GoldenEye — that’s a solid run of 25 years and 8 feature films. Still, Omega reaching back to pre-Omega days of the franchise is a fascinating choice, given that pre-1995 James Bond was mostly known as a Rolex man. Perhaps Omega wants the world to see them marking James Bond — all of it — their territory now, and given that 25-year track record, that isn’t quite so much of an over-reach as it might at first appear.

That quarter of a century marked not only 8 movies, but a fair number of special edition commercially available Seamaster watches dedicated to its role alongside James Bond. As such, by now Omega has this practice nailed down and knows exactly how many 007-derived details to pour into its limited editions, balancing between neither making the watches gimmicky, nor leaving them uninteresting for fans of 007 and 007-themed Omega watches. 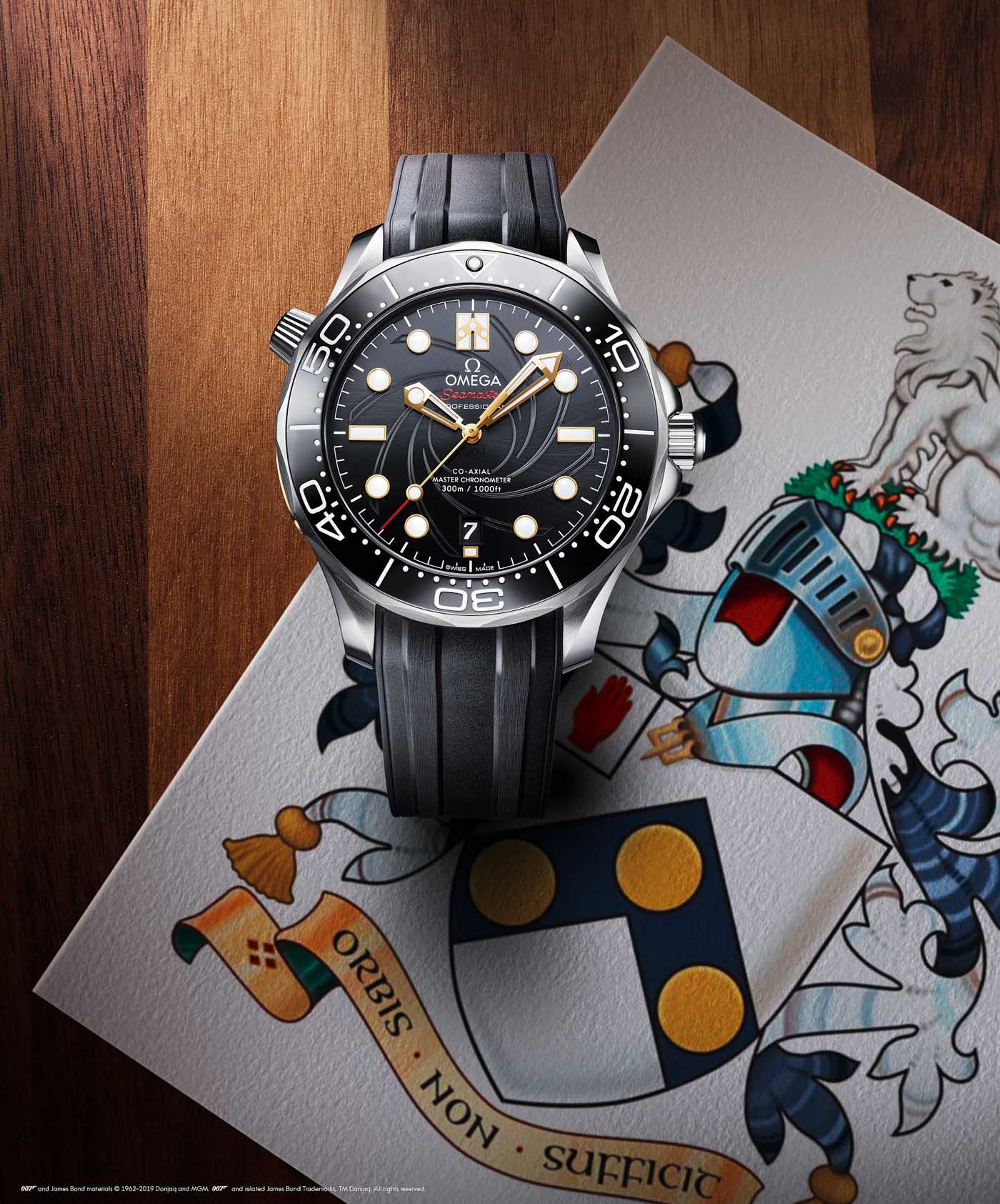 Consequently, the Omega Seamaster Diver 300M 007 James Bond On Her Majesty’s Secret Service offers six notable details to have fans reaching for their wallets in excitement. First, and perhaps most apparently, there is the dial itself: crafted from spiral-brushed black ceramic (not lacquered brass, but solid ceramic), it features James Bond’s iconic gun barrel design, laser engraved into the ceramic. The very center of the spiral is in fact exactly 9mm wide, hinting at the size of the common cartridge used in pistols… Even though, apparently, Bond in the movie On Her Majesty’s Secret Service used a Walther PPK with a .32 ACP cartridge that actually means a slightly smaller diameter of 7.65mm. To Omega’s credit, the Walther PPK has indeed also been manufactured with a 9mm caliber and Bond has used plenty of 9mm guns later on, so if you are a fan of the more modern Bond, this detail is for you. Plus, it has to be said that the dial does look more proportionate with the slightly wider, 9mm center that they opted for. 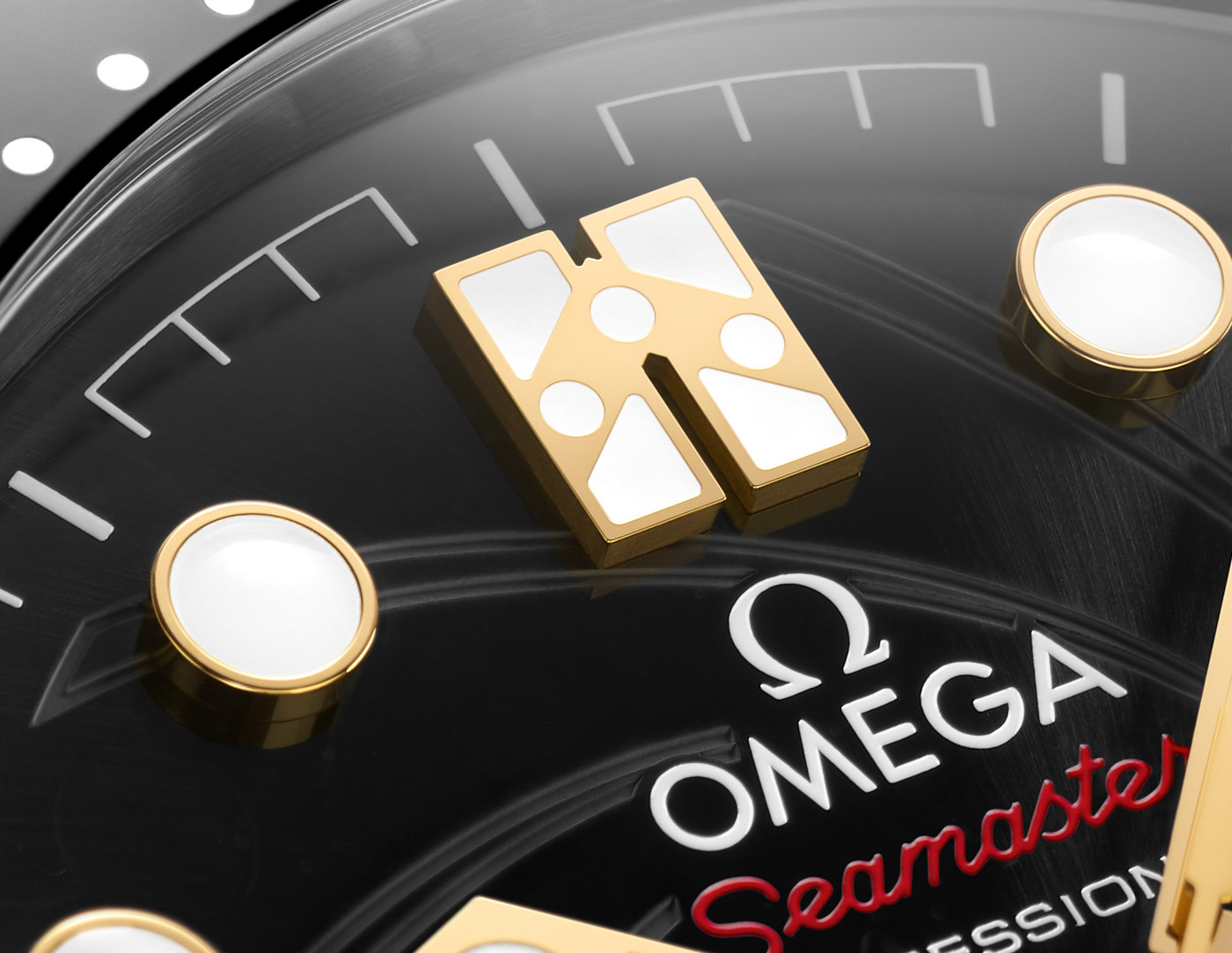 Then, at the 12 o’clock position we have a special index inspired by the Bond family coat-of-arms. All indices and hands are crafted from 18kt yellow gold, a fitting choice of material for a 50th anniversary, and are filled with Super-LumiNova with the color-coordinated green minute hand and bezel pip. The rest of the indications show up in bright blue in the dark.

Take a closer look at night and the third feature, “a secret signature” reveals itself: at the 10 o’clock (50-minute) marker, the lume reveals “50,” as another tribute to the 50th anniversary of On Her Majesty’s Secret Service. There is a pattern here: the black-on-black gun barrel pattern, the minute detailing of the 12 o’clock marker, and “50” showing up in just one of the indices add up to a neat balancing act between Bond-specific details and everyday wearability. 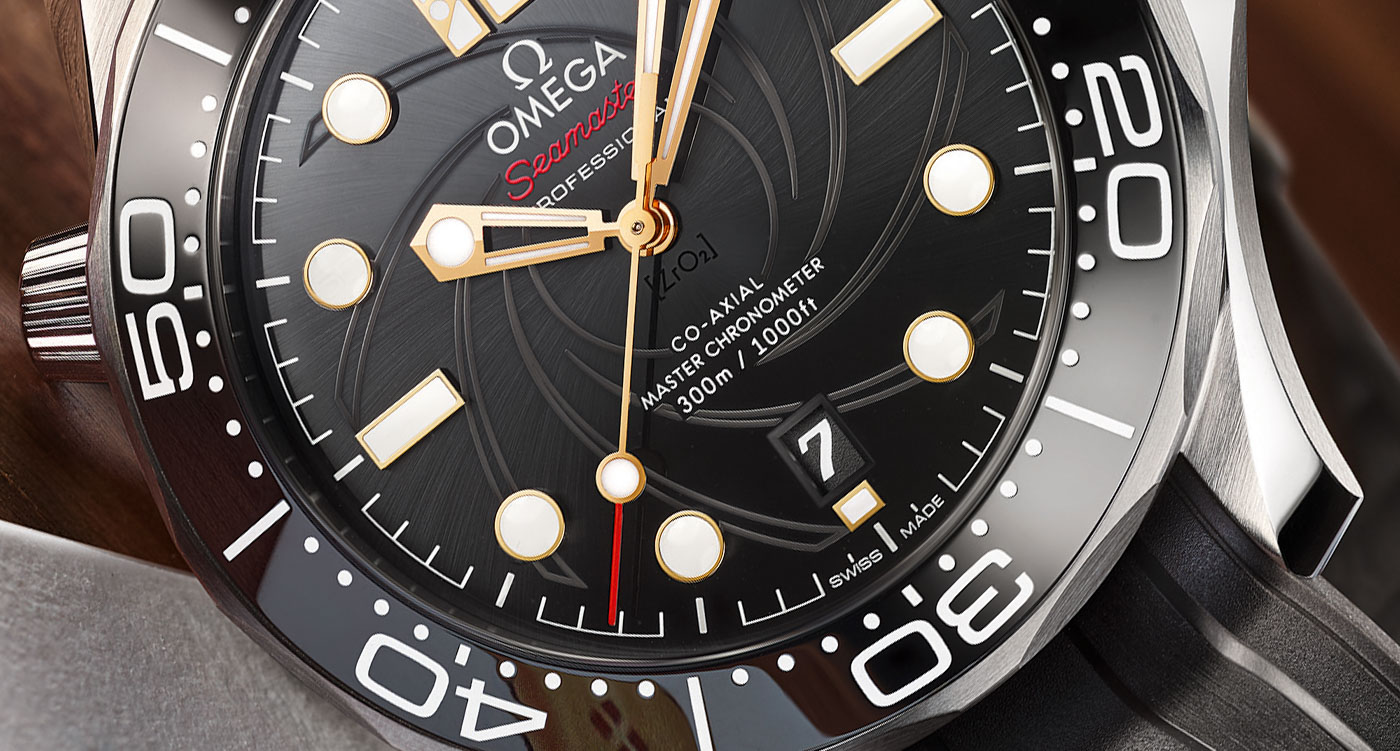 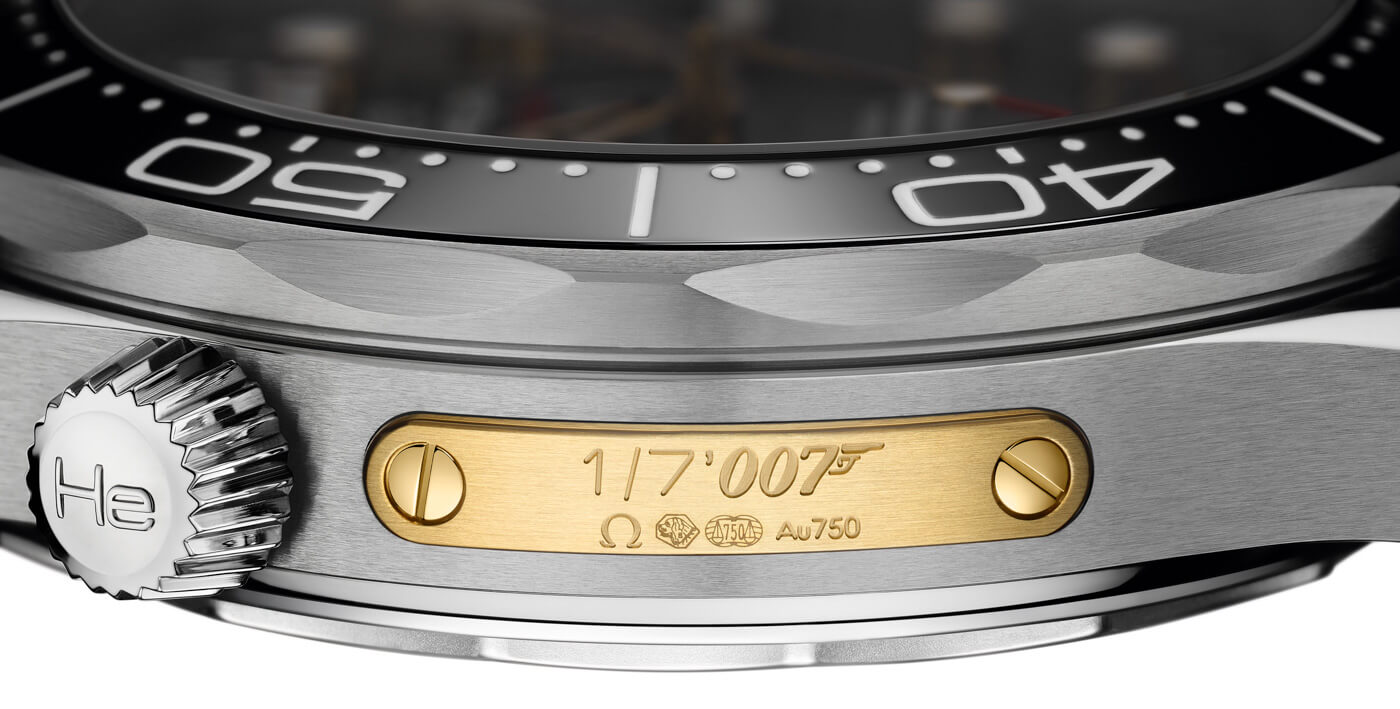 Fourth, we are looking at a special detail on the date disc, something that will make 007 fans look forward to the 7th of the month that much more: number 7 is painted in the trademark 007 font. Speaking of which, as the fifth feature we are looking at a numbered plate set into the left side of the 42mm wide stainless steel case: an 18kt yellow gold plate, engraved with the unique limited edition number — no “one of 7’007” nonsense here, they are all individually numbered. Once again, Omega is yielding a double edged sword with these limited editions: some customers expect a certain level of exclusivity, but not too much exclusivity otherwise they themselves won’t be able to get their hands on it. So, yes, 7,007 watches is a lot for a limited edition — but not a lot for a global base of Seamaster and James Bond fans. 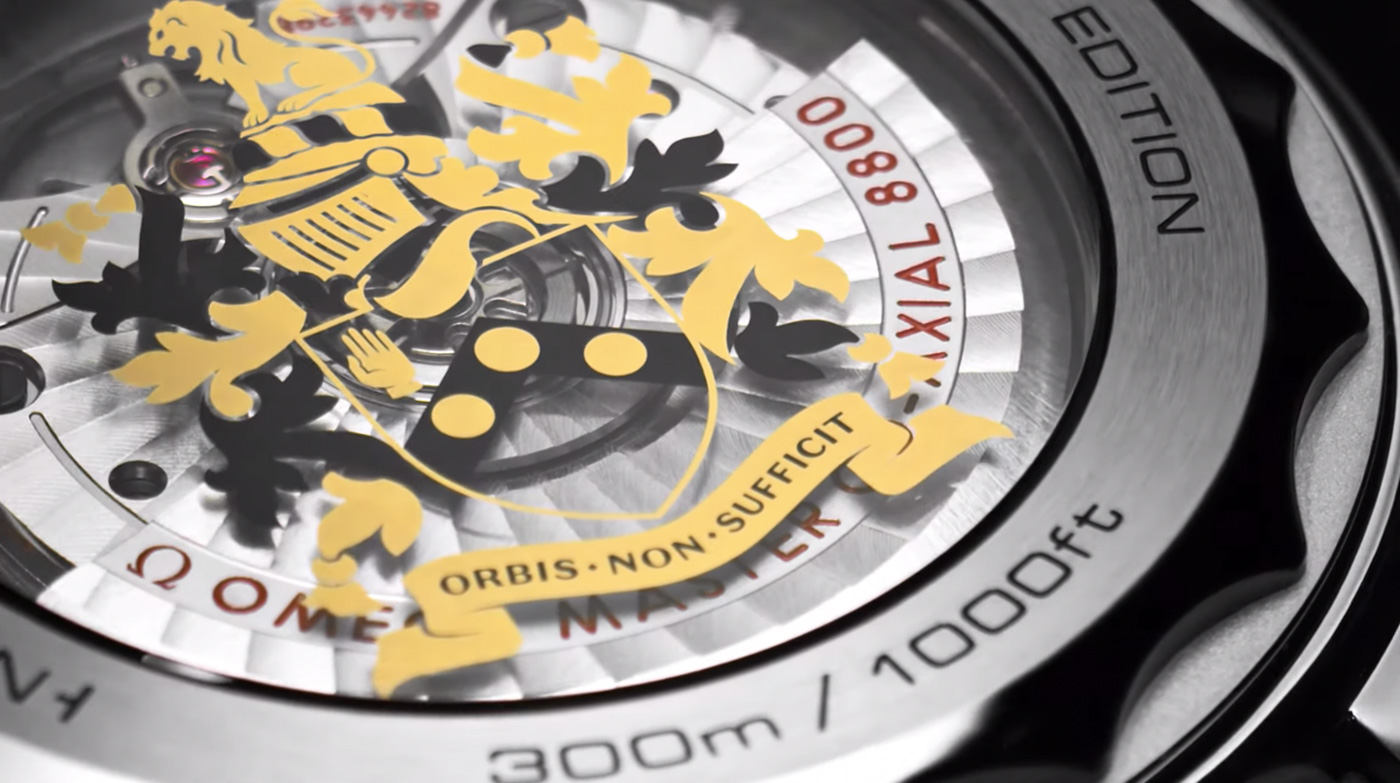 As the sixth detail comes the caseback. Omega has not supplied caseback images with the release but we were able to secure one from their brief product launch video. The transparent caseback reveals the Omega Master Co-Axial Calibre 8800, an in-house caliber with Master Chronometer certification, 55 hours of power reserve and an in-house tested daily rate between 0 and +5 seconds. Over the neatly decorated movement rests the Bond family crest noting “Orbis Non Sufficit” — i.e. the world is not enough. Rings a bell? It should.

One additional feature of this limited edition Omega Seamaster is its special presentation case that adds the stainless steel bracelet along with the rubber strap, along with a strap changing tool and a travel pouch with the Bond family crest on it. This may be one step too far for some, but truth be told, I’d find no hardship in rocking a Bond-style watch pouch. 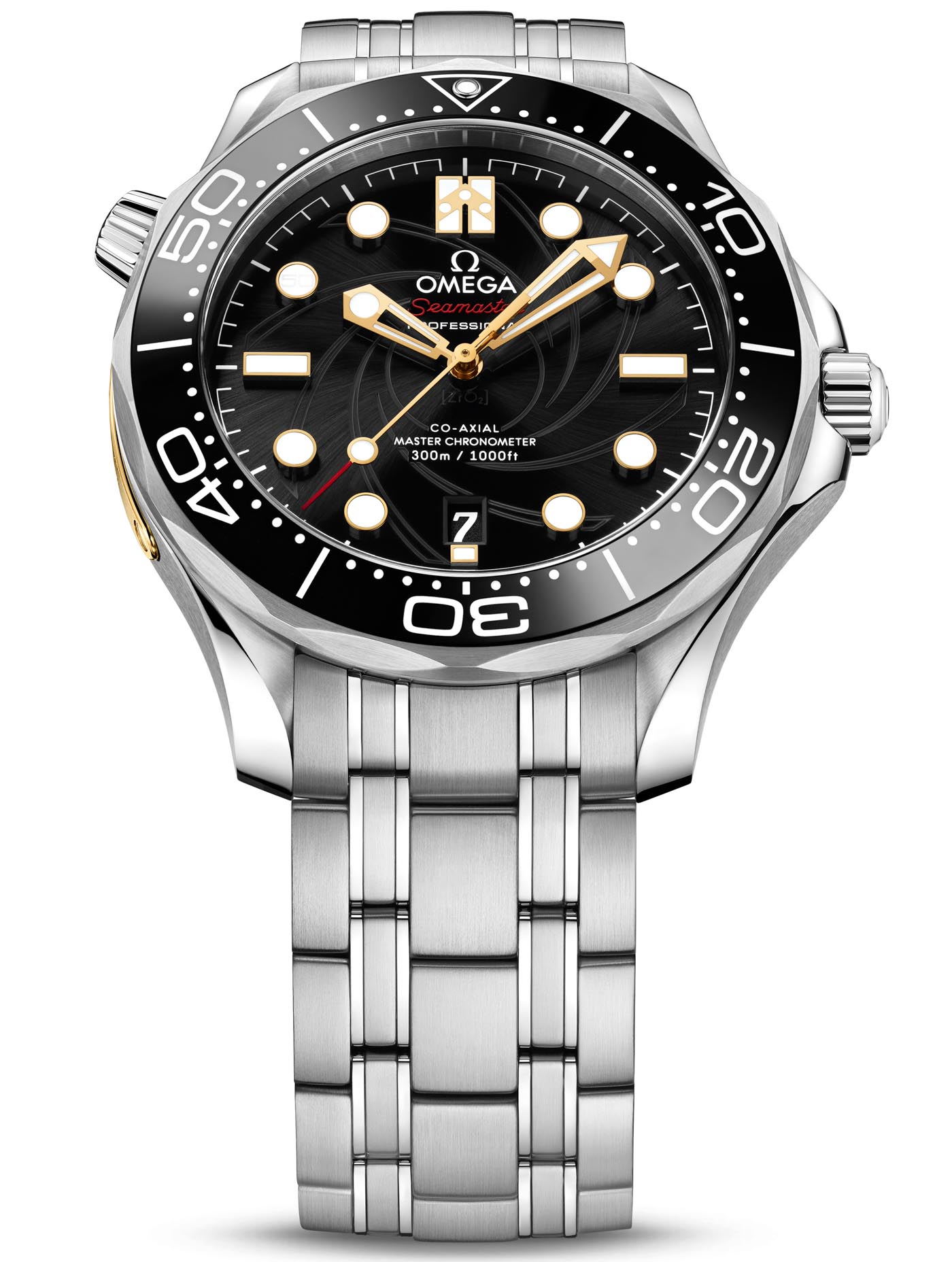 To close on a personal note that hopefully you will be able to relate to, I will say that while I’m certainly not the biggest James Bond fan in the world (I just thoroughly enjoy the series), I’d still be very tempted to get this particular Seamaster over the regular one, simply for its exciting, fun, yet elegantly done details which I’d expect to find entertaining down the road. We don’t often see gun barrel patterned ceramic dials on watches, nor coats of arms in indices, and that’s not because they aren’t cool, but because you need a theme to be able to add these to an already successful watch collection. With the James Bond Seamaster, Omega has those bases well and truly covered.