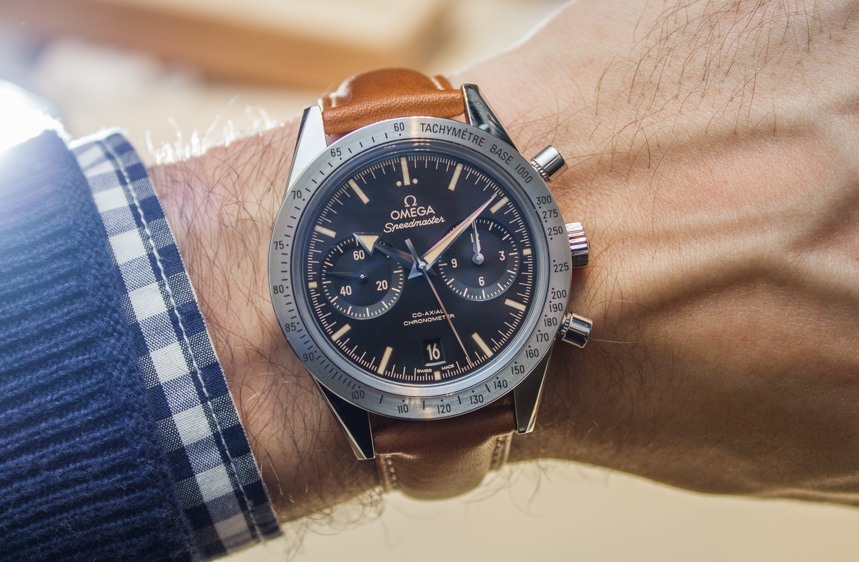 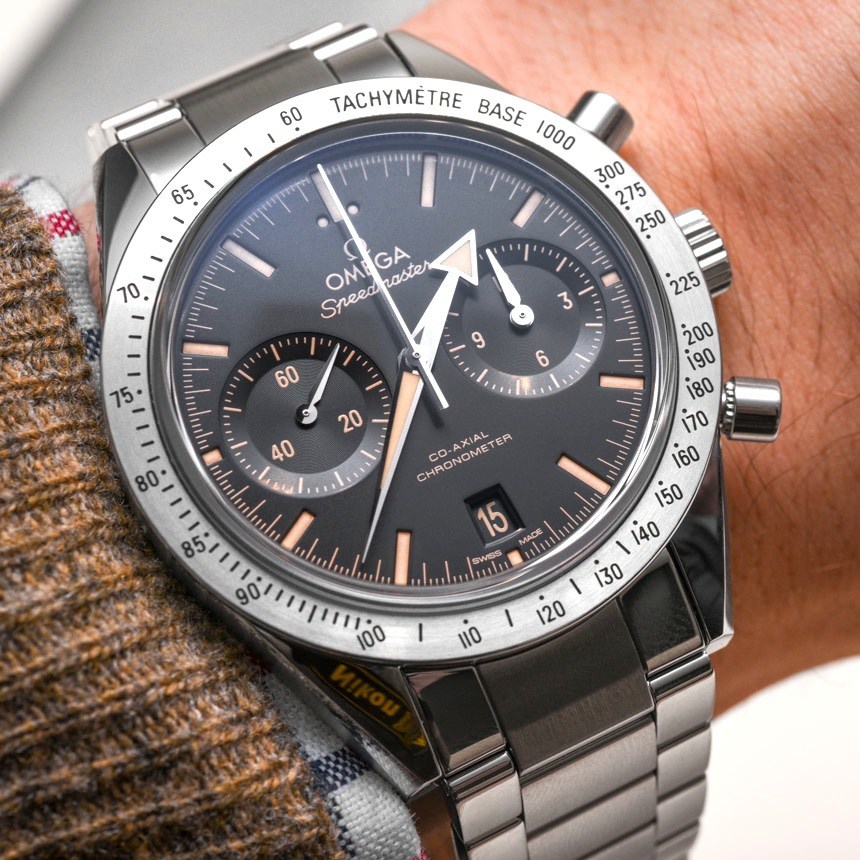 At Baselworld 2015, Omega introduced yet another version of the Speedmaster ’57 with a very cool looking retro design. In addition to the “vintage” style dial with a matte black face and aged-style luminant, Omega decided to use a slightly different handset which is more indicative of the original Omega Speedmaster from 1957 with the so called “broad arrow hands.” 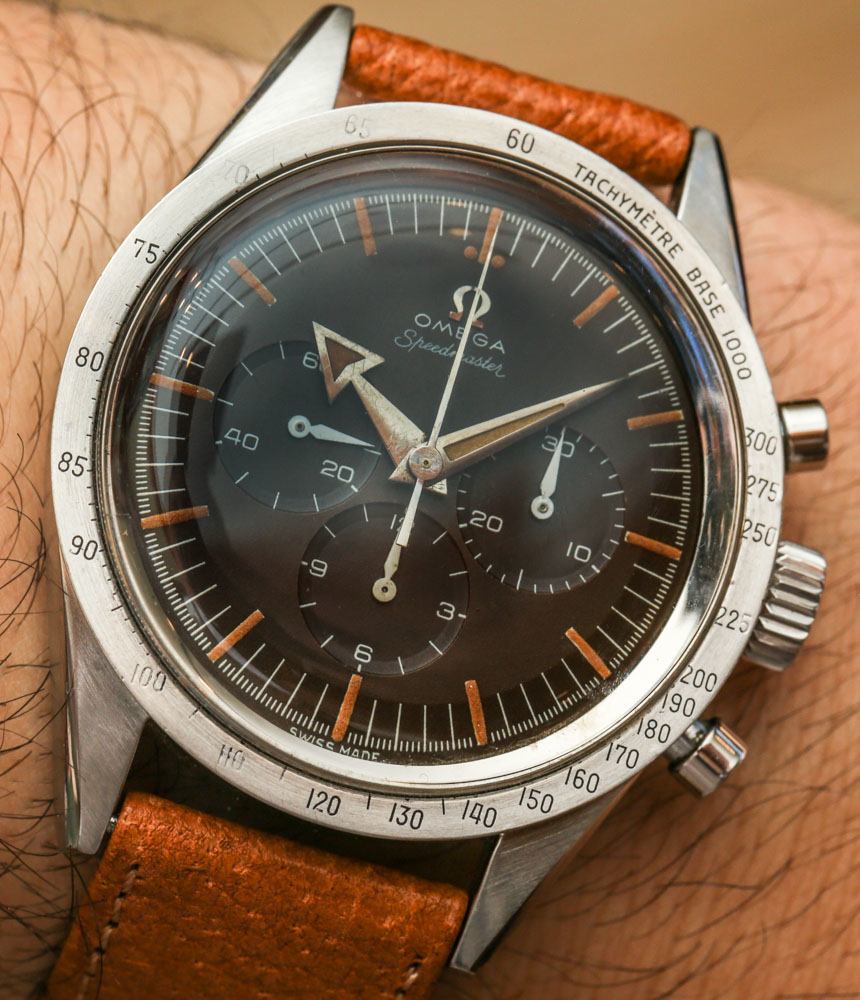 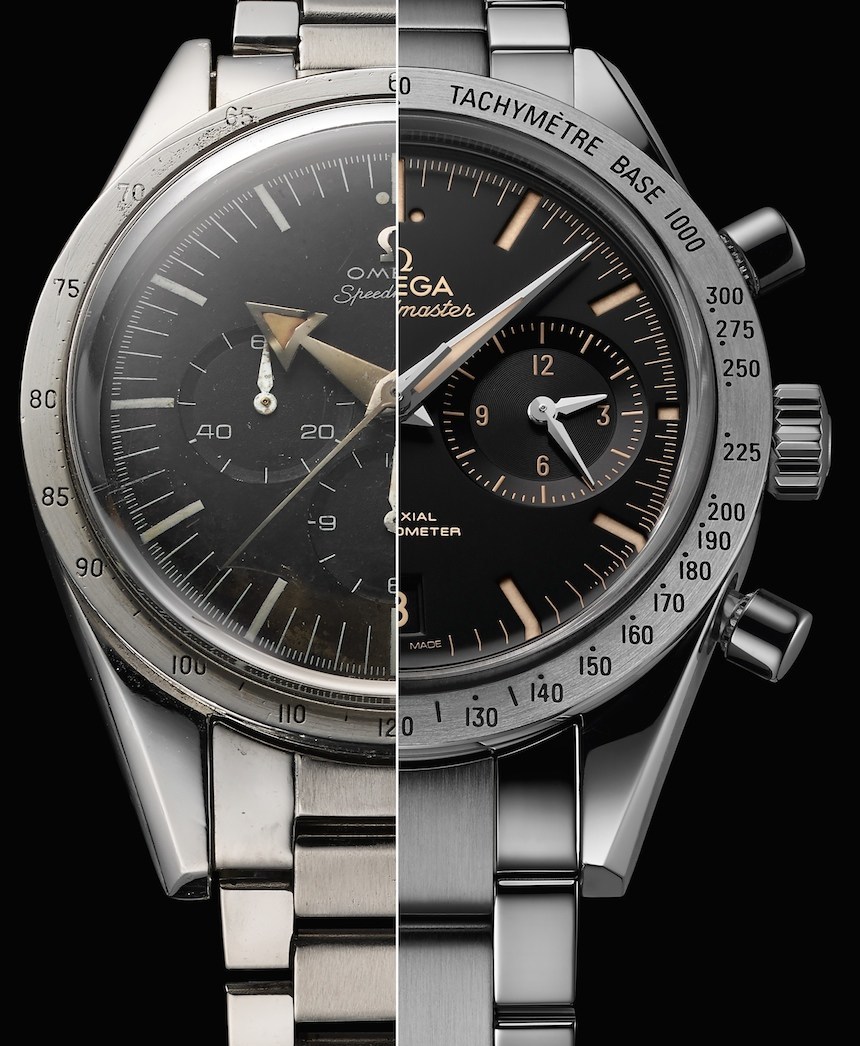 A few months ago, I was strolling on Sunset Boulevard here in Los Angeles and noticed an extremely tall and prominent billboard advertisement for Omega, which happened to feature this specific Omega Speedmaster ’57 watch… as well as George Clooney. On a classic motorcycle in the desert, Clooney is riding along wearing the Omega Speedmaster ’57 and the phrase “George Clooney’s Choice” is the selling point. For a mainstream audience, this message likely works well and the attractive design of the vintage looking dial on this particular version of the Omega Speedmaster ’57 is most certainly a crowd pleaser. Can you blame Omega for not going into additional detail about the watch and the history it leverages? I don’t think so – what I find most interesting are the layers of appreciation possible with a watch like this that can be marketed in a range of ways. You can enjoy the Omega Speedmaster ’57 as a watch nerd, or just as a guy looking for a nice looking luxury timepiece. 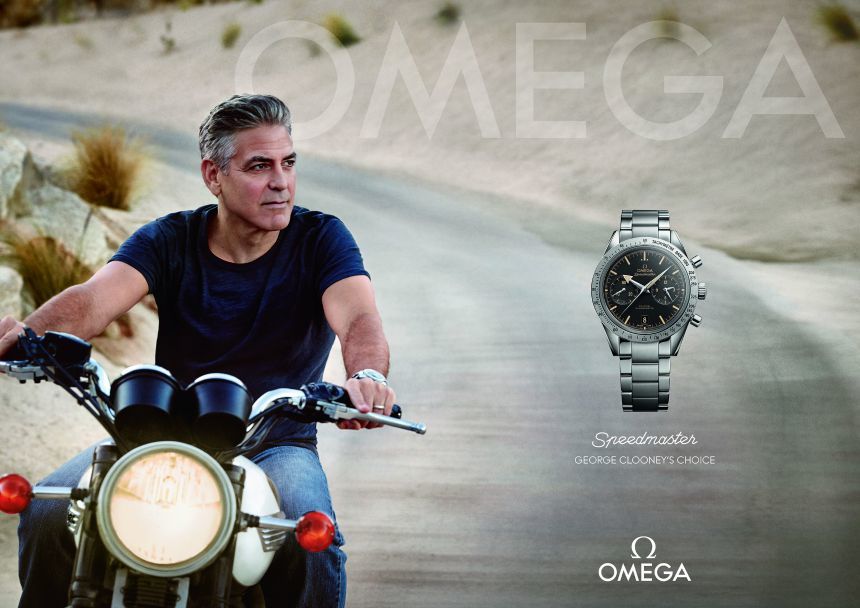 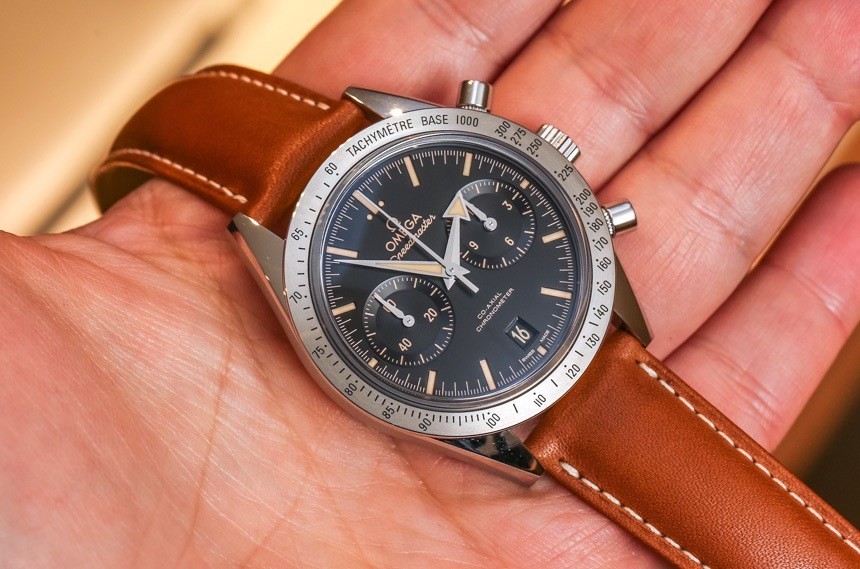 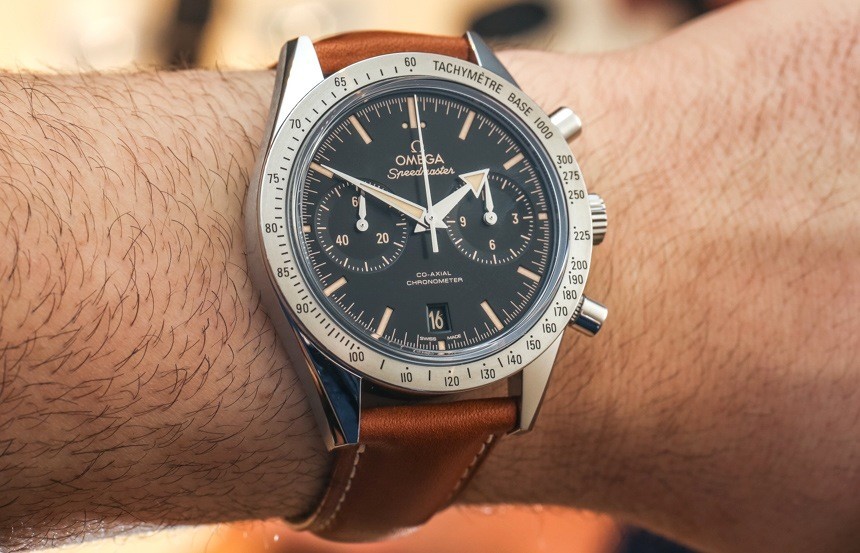 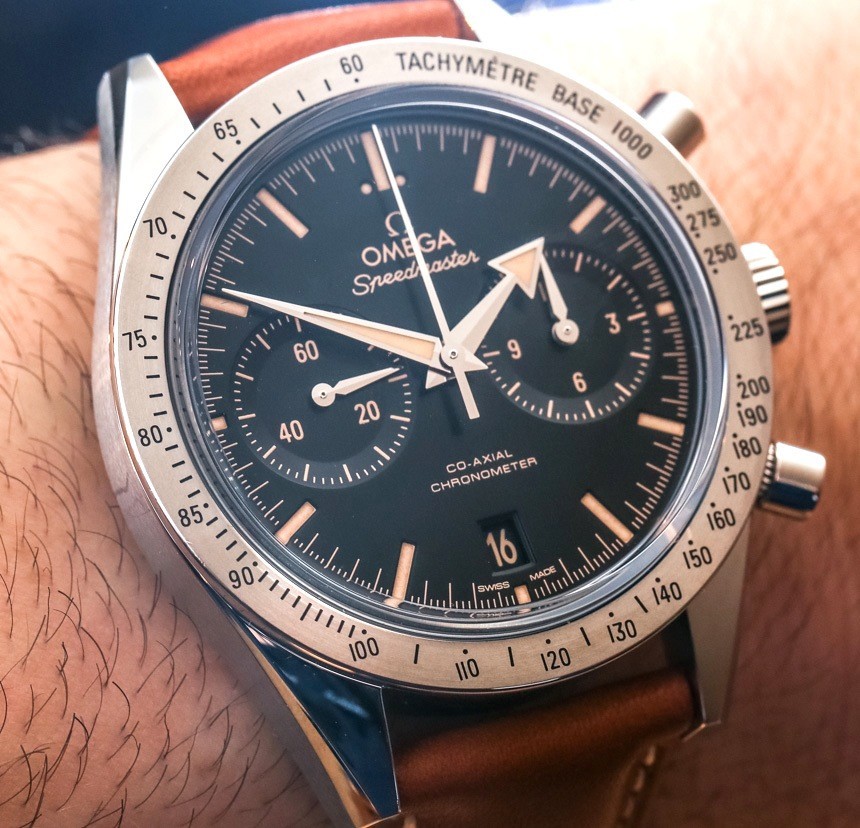 While I am not always a fan of watches which are blatantly new but trying to look old, I really like the particular combination of colors and style in these 2015 Omega Speedmaster ’57 Co-Axial Chronograph 41.5mm reference 331.10.42.51.01.002 (on the steel bracelet) and 331.12.42.51.01.002 (on the leather strap) watches. The honey-brown Barenia leather strap on the latter is particularly nice. Speedmaster watches are not typically offered on a strap (well sometimes a strap is included along with a bracelet) but this is a really handsome model. I also find that the more historic combination of hands works really well, as this 2015 Omega Speedmaster ’57 most directly hearkens to the original Omega Speedmaster watch from 1957 – what a damn fine classic that has turned out to be, right? 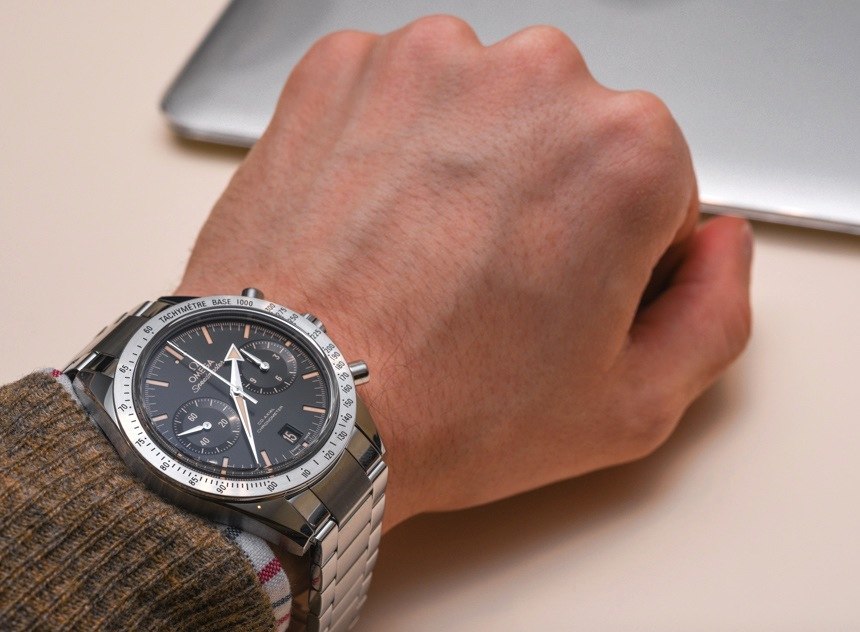 At 41.5mm wide in steel, the Omega Speedmaster ’57 Co-Axial Chronograph fits on the larger side thanks to the broad lugs. Though, of course, it fits a bit smaller than the over-44mm-wide version (that is also fantastic and shares the same caliber 9300 movement). The case has a sapphire crystal over the dial as well as over the movement and is water resistant to 100 meters. 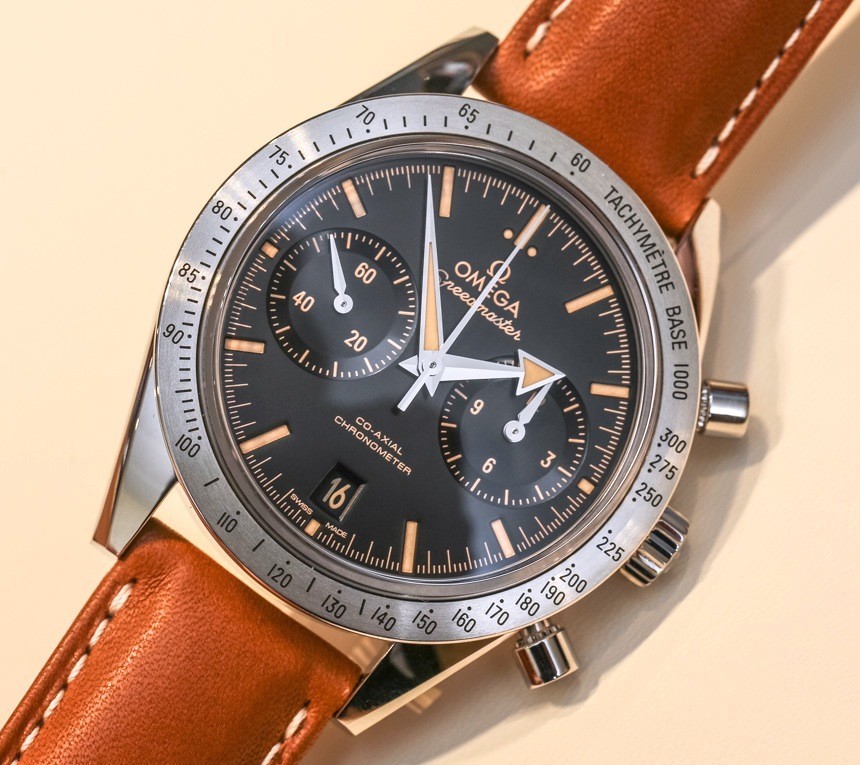 The dial legibility is still fantastic despite the cream colored indexes and hands. I have a feeling that the lume is also very good. The dial features two subdials, but thanks to the 9300 movement has a full 12-hour chronograph as the right subdial has a counter for chronograph minutes and hours. The movement also features the date. Unfortunately Omega still hasn’t imbued the 9300 family of movements with their “Master Co-Axial” technology which essentially adds the anti-magnetic properties. Though that will happen eventually, and the 9300 movement remains one of the best calibers that Omega produces. 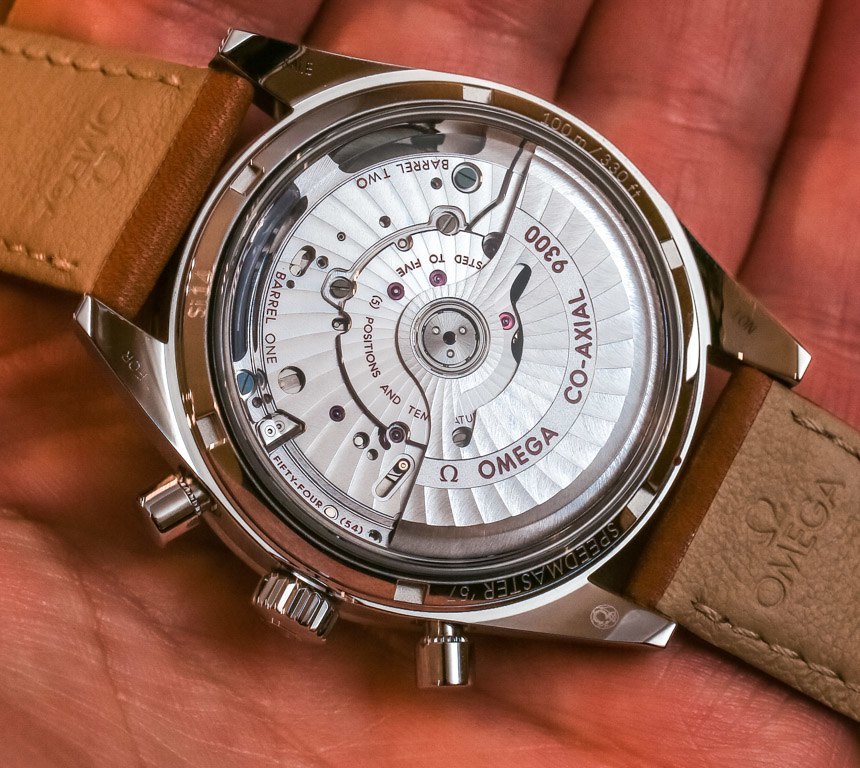 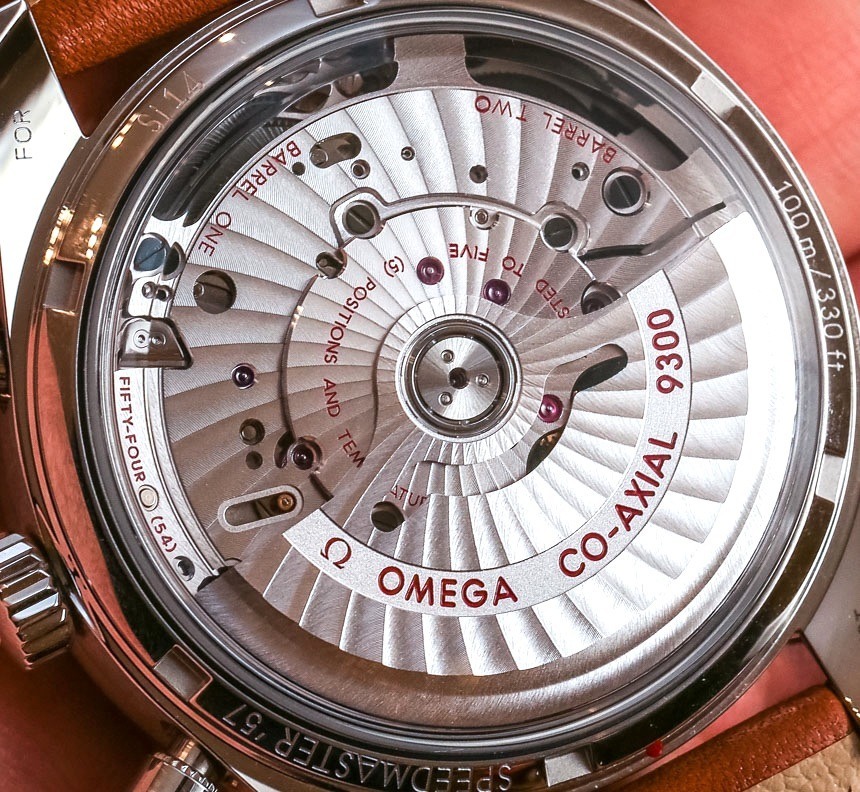 With a Co-Axial escapement and COSC Chronometer certification, the caliber 9300 movement is among the most beautiful “mass production” Swiss in-house made movements around right now, in my opinion. The movement has 60 hours of power reserve and contains a silicon balance spring, operating at the abnormal 3.5Hz frequency that Co-Axial movements do. 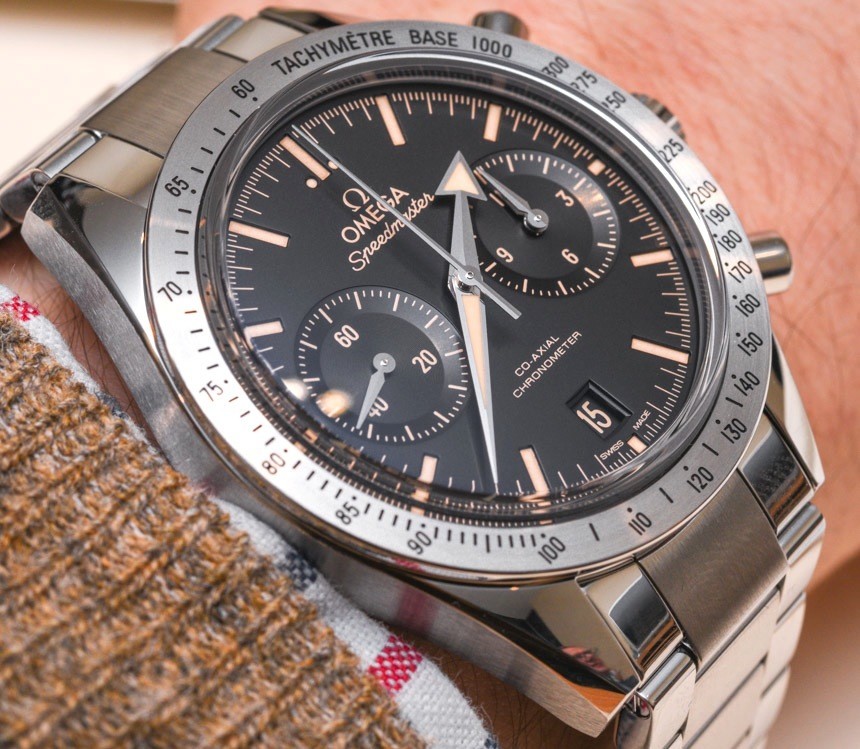 The 2015 Omega Speedmaster ’57 Co-Axial Chronograph watches clearly do fit into the larger Omega Speedmaster ’57 family but we call them the “Retro” or “Vintage” models given the unique handset in addition to the dial colors. It might have been a good idea for Omega to further differentiate the collection with slightly unique names, but at least we have the reference numbers which, again, are the 331.10.42.51.01.002 (bracelet) and 331.12.42.51.01.002 (strap). Price is 7,500 Swiss Francs and $9,000 in USD. omegawatches.com