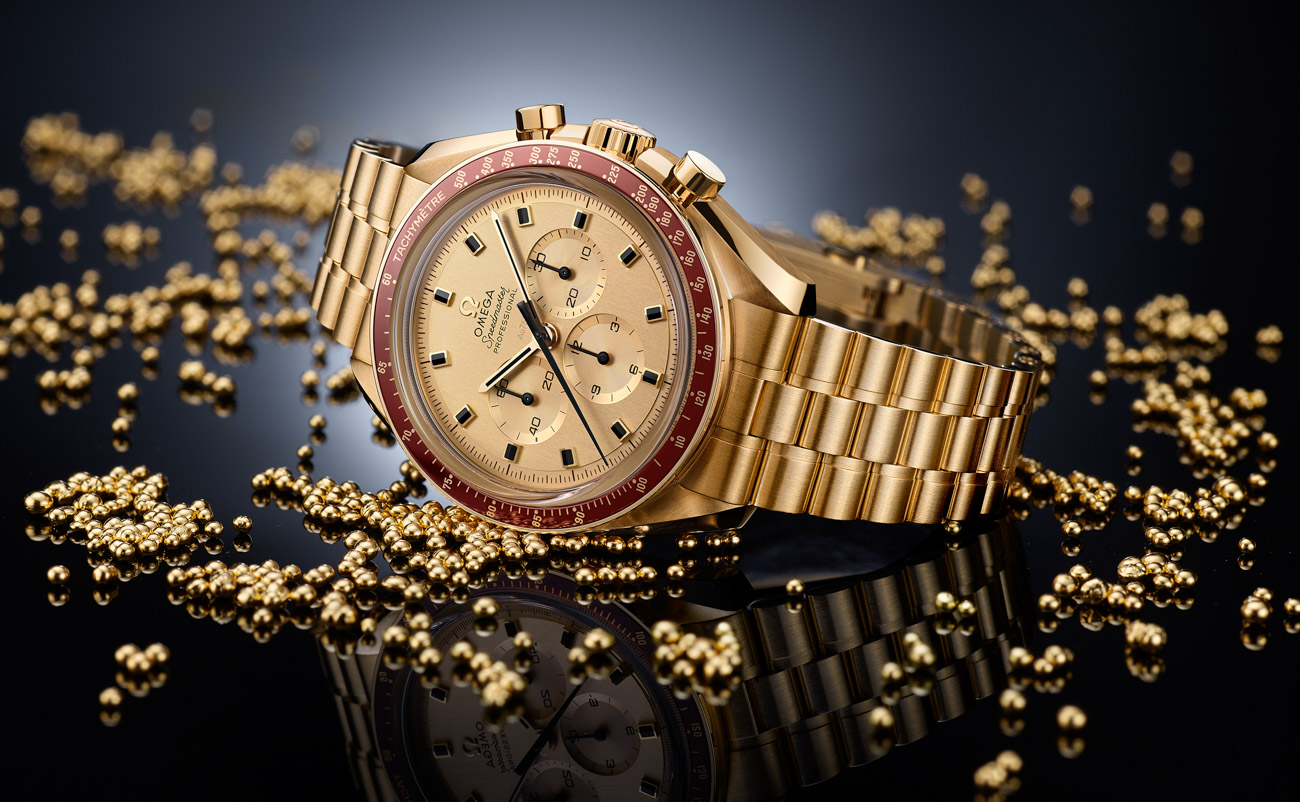 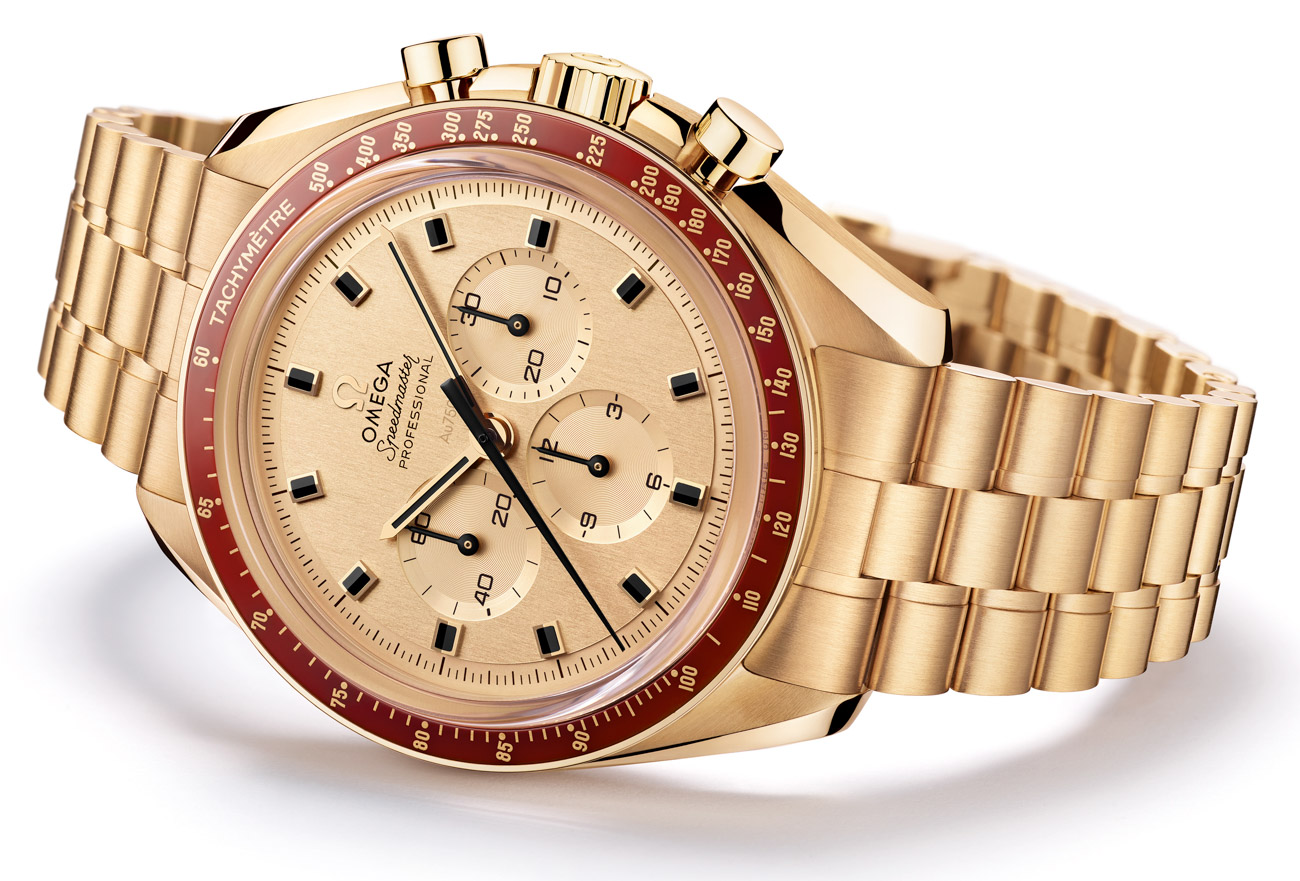 For the 50th anniversary of the 1969 Apollo 11 moon landing mission, Omega has remade a classic 18k-gold Speedmaster with onyx hour markers and a burgundy-hued bezel. The Omega Speedmaster Apollo 11 50th Anniversary Limited Edition is a richly priced and outfitted luxury Speedmaster with a good historical narrative and a fresh new Omega in-house movement. Omega uses its brand new caliber 3861 manually wound movement, something collectors have been eager to receive for a while. Basically, the 3861 is a fancier version of the original caliber 861 movement found in many historic Omega Speedmaster chronograph watches. Most important about the 3861 movement is that it uses anti-magnetic parts that enable it to pass Omega’ METAS certification. Finally, a movement exists that allows classic Omega Speedmaster timepieces (made today, of course) to bear the brand’s coveted “Master Chronometer” labeling. 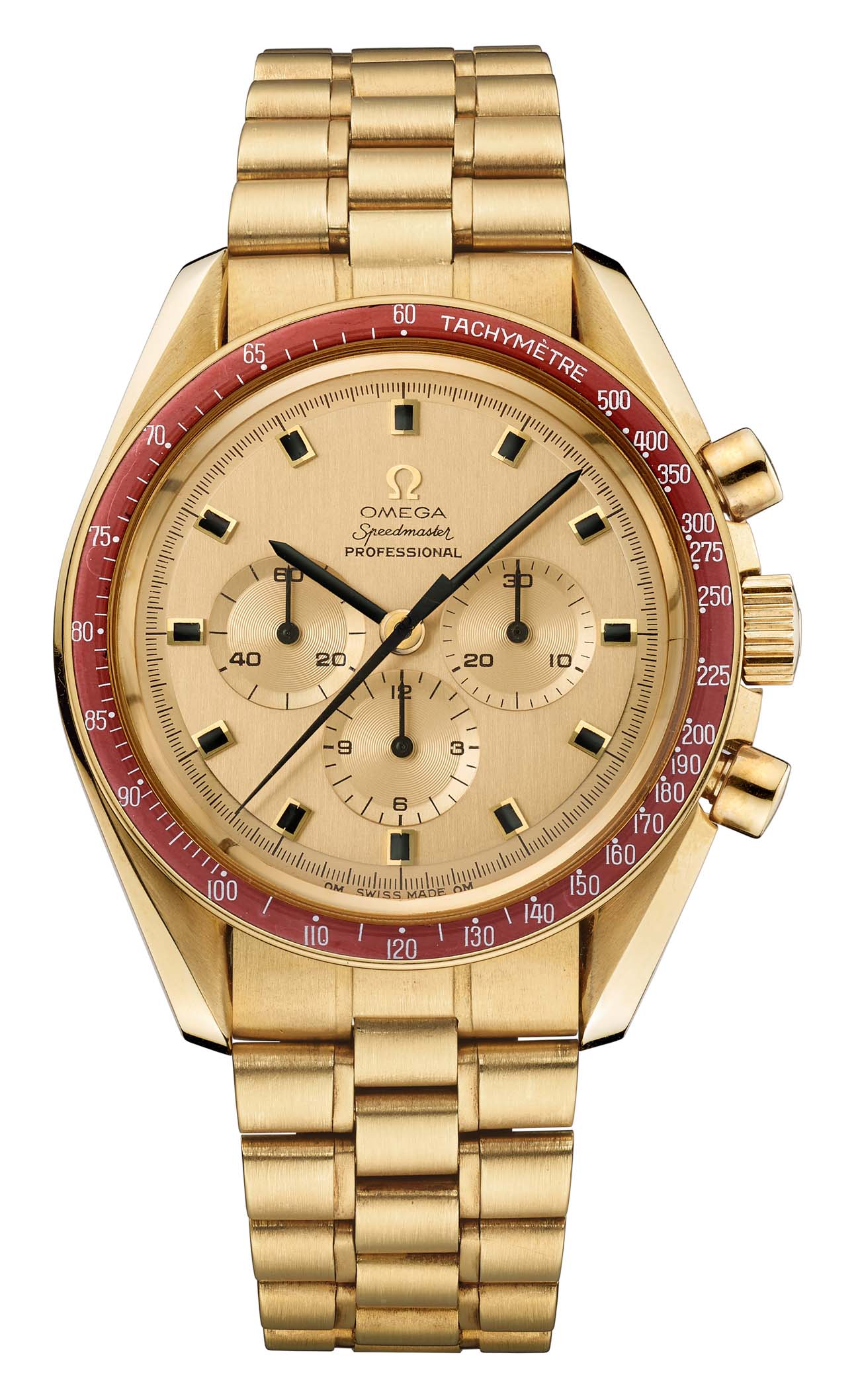 Omega didn’t take this Apollo 11 50th anniversary occasion to break new ground, design-wise. Omega has been rather reclusive lately with its courage to try new things. I’m more than impressed with the brand’s technical merits and mechanical movement attributes, but I feel as though Omega, over the last few years, has missed opportunities time and time again that would have allowed it to present new design language. I’m still waiting for the Omega I know and love, which takes bold product risks to peek out from under the rock of where it’s being kept. The collector community is starting to get the idea that product decisions are being made by committee at Omega, as the releases are starting to lack a bit of the soul that will allow Omega’s product managers 30 years from now to make their own reissued watches of interesting products from today. 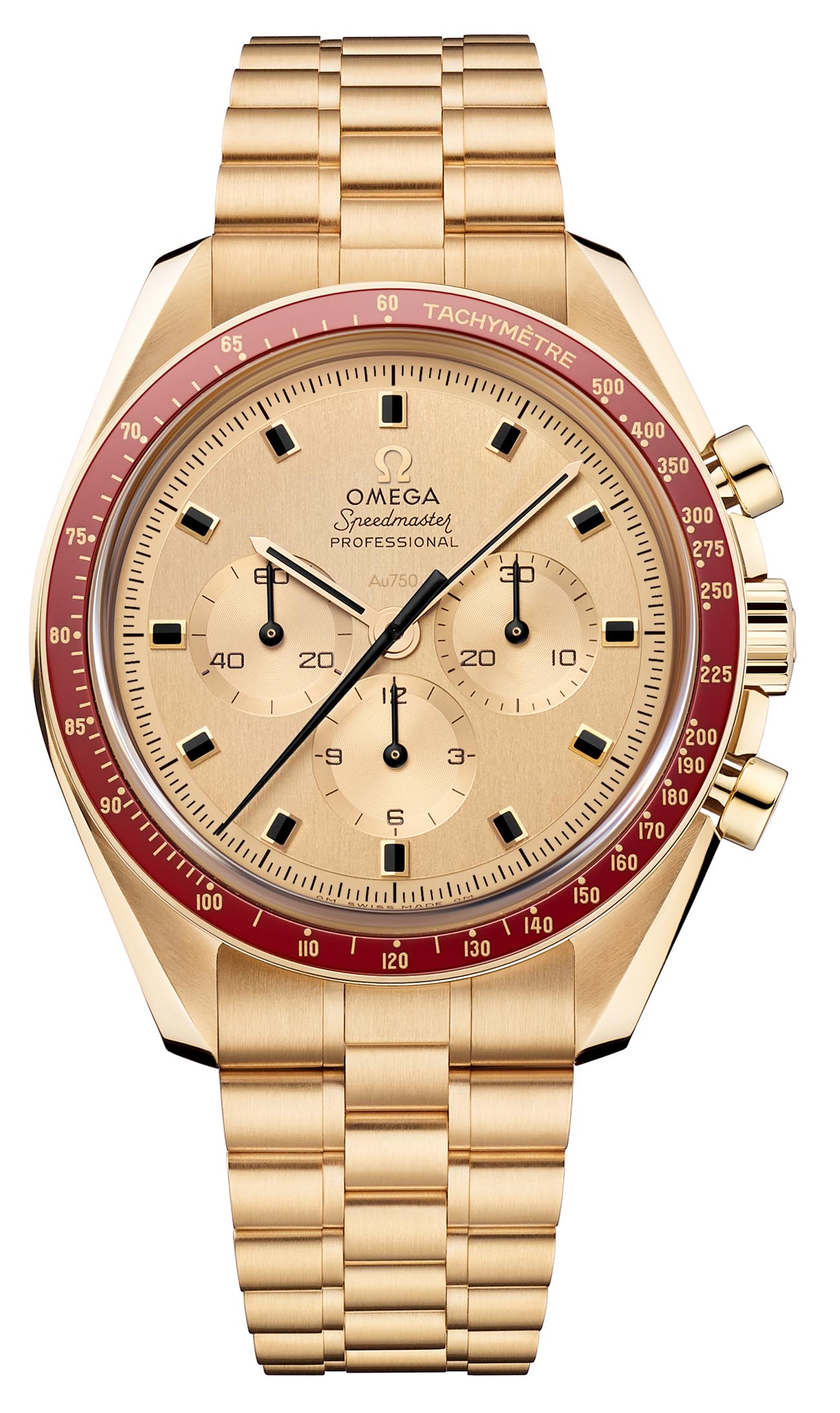 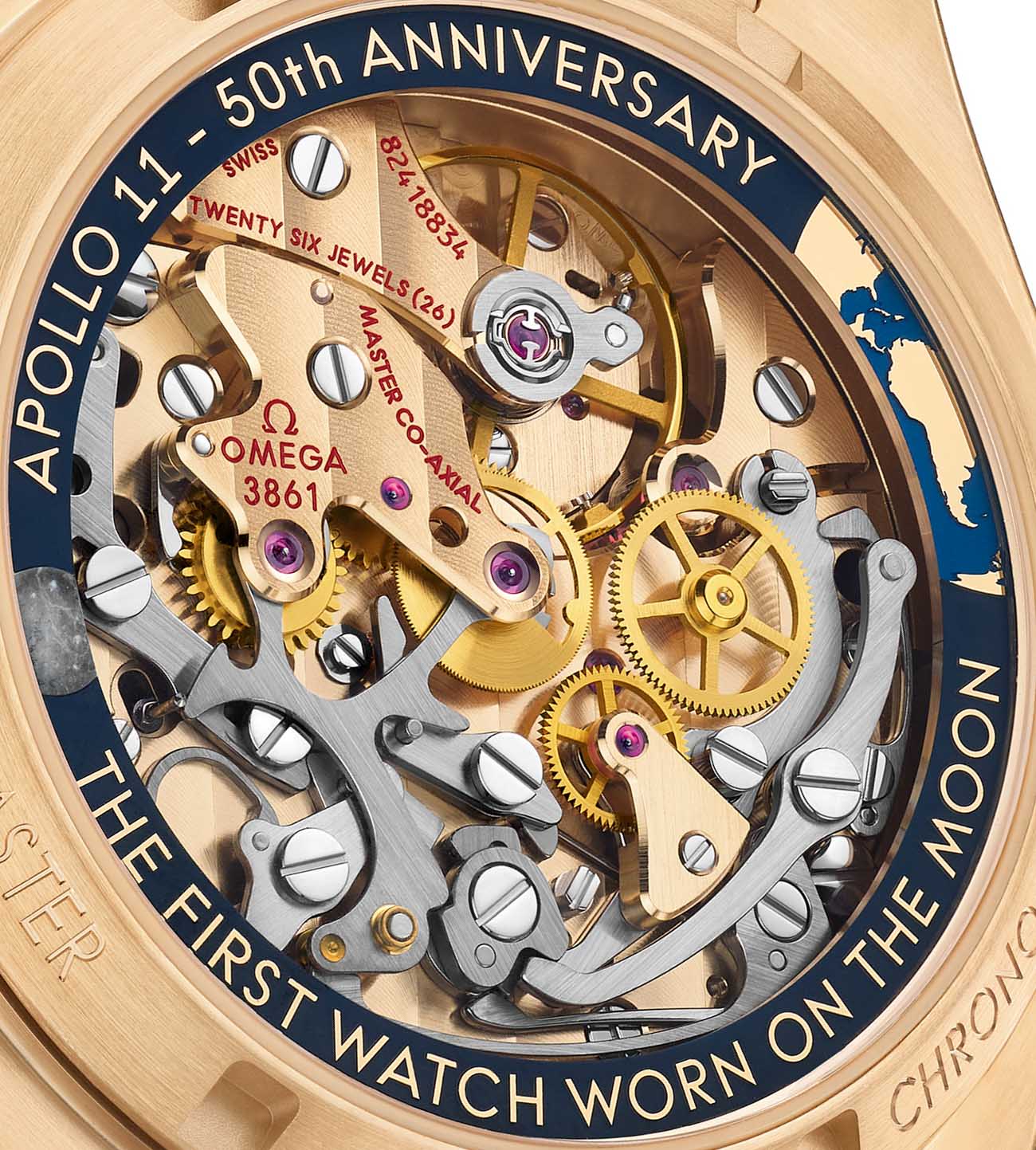 The specific watch Omega was inspired by for this 2019 limited edition Speedmaster Apollo 11 was the Omega Speedmaster BA145.022. The BA145.022 was a solid yellow-gold with matching bracelet Speedmaster issued in honor of the Apollo 11 mission success. One funny story about the watch is that one was given to then-U.S. President Richard Nixon. U.S. law prevents gifts like this from being accepted, and such gifts are often made for marketing purposes (and it was returned to Omega). The “Richard Nixon” BA145.022 is pretty cool and is often visible at the Omega Museum. It has a very period-specific design (with its burgundy-red anodized aluminum bezel and black onyx-stone hour markers) which has always attracted its collector-followers today. People have been asking Omega to remake this watch for a while, and all Omega needed to do was listen. The plan is to produce 1,014 pieces of this limited-edition set. 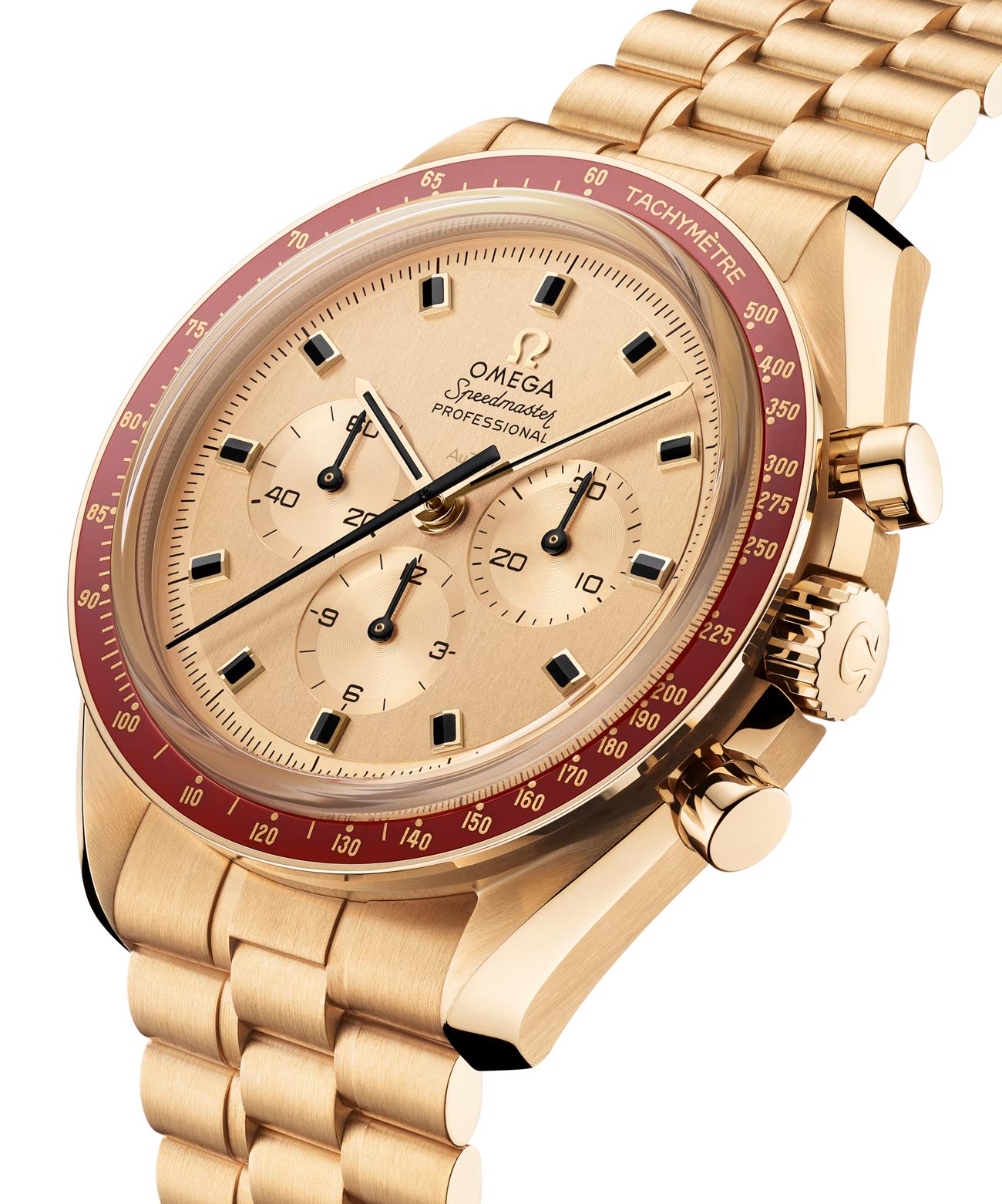 The colorway of the BA145.022 has always reminded me of Iron Man; maybe someone else has pointed that out before. The re-issue for 2019 is very true to the original in a lot of ways, but with modern trimmings that really make it a sophisticated timepiece for today. The red bezel is now ceramic; the hands are also not entirely black, as on the original watch. I really wish they would have been all black, to be honest. But Omega is allowed to make some statement about the design of today. Applied black-onyx hour markers are killer-looking and should make for a legible and masculine luxury Speedmaster dial. The dial of the watch is in solid gold, of course. An interesting detail about the re-issued watch is that Omega finally fixed the incorrect chronograph fraction-of-a-second markings from the original. They were originally for a 1/5th of a second hand and not a 1/3 of a second hand.

42mm-wide and representing the shape of the 4th generation Speedmaster model, the Speedmaster Apollo 11 50th Anniversary Limited Edition watch bears a few different shapes of the Omega logo (as did the original) but uses a new gold alloy. Omega has joined several other luxury watchmakers to offer a “pale gold” alloy, which is a lighter version of yellow gold. Omega calls the new alloy “Moonshine Gold,” which they say is a good name because the color of the metal is supposed to look like “the shining moonlight in a dark blue sky.” Clearly, someone in marketing wrote that. I also wonder if they know “moonshine” in America is what some people call homemade distilled alcohol.

Over on the rear of the case, we have a sapphire crystal caseback window with a view of the 3861 movement. A ring around the movement has some nice graphics printed on it and reads “Apollo 11 50th Anniversary. The First Watch Worn On The Moon.” Omega attempts to match the “moonshine” gold color with the finishing on the movement, whose bridges are plated in moonshine gold for a nice effect. The caliber 3861 appears to function the same as the 861 but with a new silicon balance spring and Master Chronometer certification.

Attractive and collector-friendly, the Omega Speedmaster Apollo 11 50th Anniversary Limited Edition watch is a safe bet from Omega that I hope will be followed up with something a bit more original later in the year to celebrate the brand’s long-standing relationship with NASA and the Apollo 11 legacy. I’m sure these will look handsome on the wrist, and elements such as moonshine gold and the caliber 3861 movement have life far beyond this model. Price for each of the 1,014 Omega Speedmaster Apollo 11 50th Anniversary Limited Edition watches is 32,000 Swiss Francs. Learn more at the Omega website here.