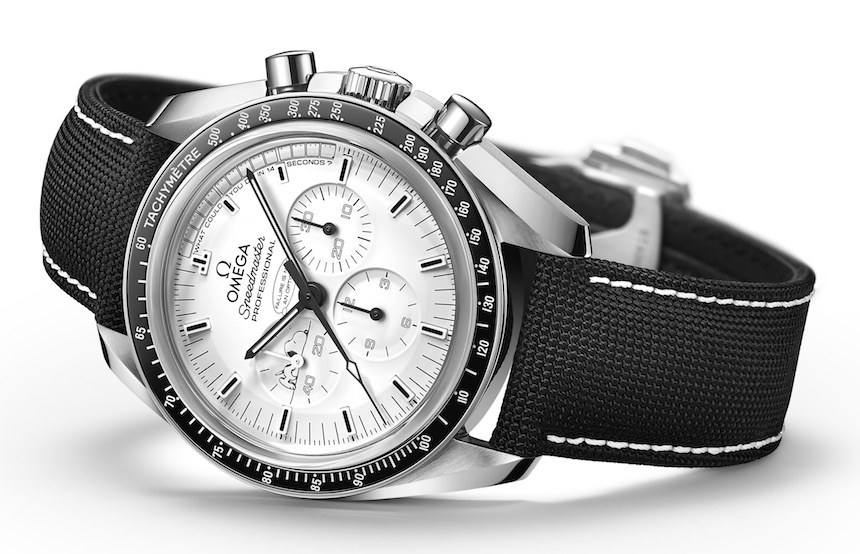 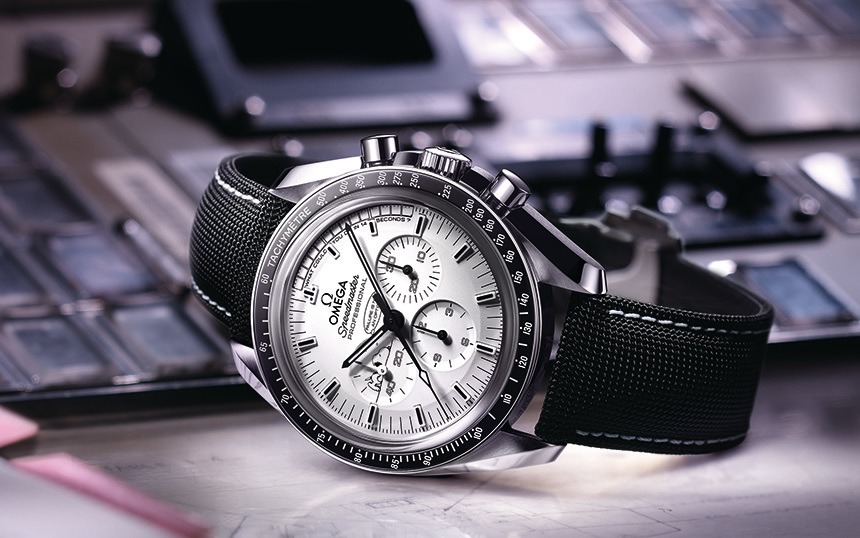 This may not be your Dad’s (or Grandad’s) Speedmaster, but this new limited edition Omega Moonwatch is a direct reference to an event that previous generations will not soon forget. To commemorate the 45th anniversary of Apollo 13, Omega has announced a new and rather comical (sorry) tribute not only to the famously aborted Apollo mission, but also to the Silver Snoopy Award that NASA gave to Omega in 1970 for their work on the Apollo program. With a beautiful crisp white dial and a period-correct Cal 1861 inside, the Omega Speedmaster Apollo 13 Silver Snoopy Award Limited Edition watch is packed full of references to one of the most famous Apollo missions, the one that went wrong. 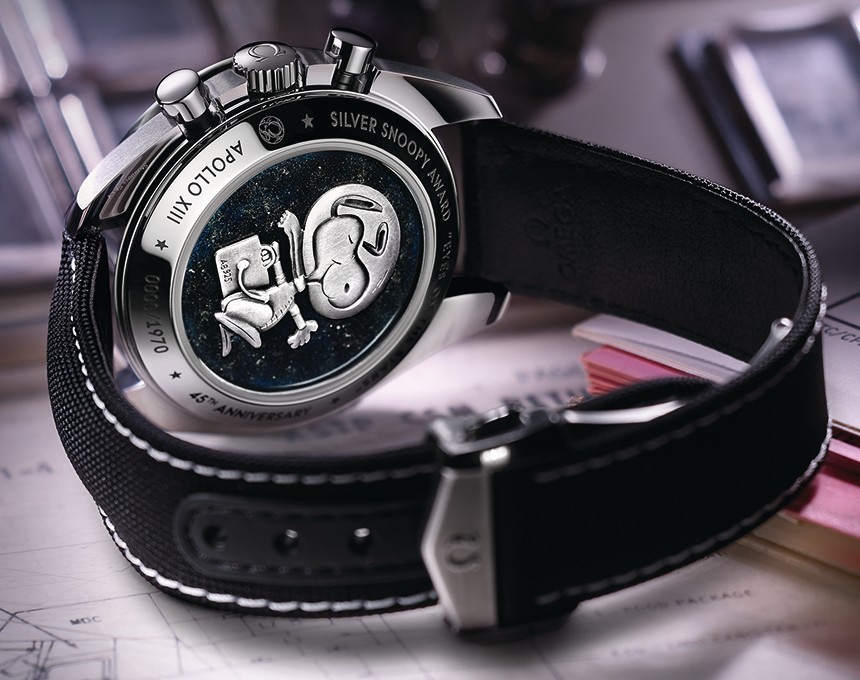 First, let’s take a look at the Snoopys, of which there are two. The first is sleeping in the running seconds sub dial at nine o’clock (just as he is often depicted atop his dog house in the comic strip) – and he is even lumed. The second Snoopy is rendered in sterling silver and protected under a domed sapphire crystal on the case back. Similar in design to the pin provided with the Silver Snoopy award, this truly silver Snoopy is surrounded by blue enamel with hand-applied silver flakes. Omega has a proven flare for case backs, but this one is entirely something else, and for a special edition such as this, I love the attention detail.

Printed within a cartoon thought bubble emanating from the sleeping Snoopy’s head is a quote from the 1995 Ron Howard film Apollo 13. “Failure is not an option” was a line delivered by Ed Harris as he played flight director Gene Kranz, the man charged with bringing Jim Lovell, Jack Swigert and Fred Hasie back to planet earth. 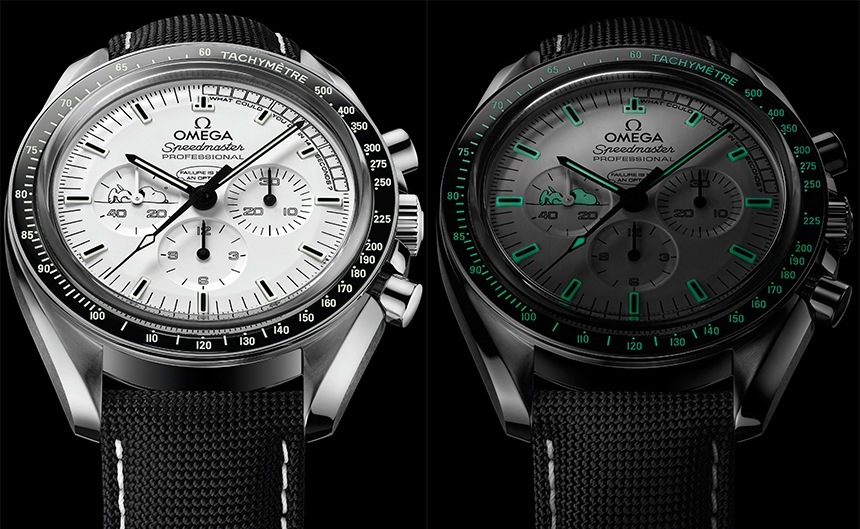 Finally, the first 14 seconds on the dial are highlighted and flanked by text that reads “What could you do in 14 seconds?” This is a reference to a 14-second course correction that the Apollo 13 crew successfully timed and completed to correct their return trajectory after one of the two oxygen tanks on the service module exploded while the crew was headed to the moon, some 200,000 miles from earth. They actually timed this incredibly dire maneuver using Jack Swigert’s Omega Speedmaster, an actuality that is both exceedingly cool and also pure marketing gold.

Aside from these nods to one of the most memorable moments of the Apollo program, the Omega Speedmaster Apollo 13 Silver Snoopy Award Limited Edition watch has a 42 mm wide steel case that is 14.8 mm thick. The recognizable black bezel is ceramic and boasts a luminous scale similar to that seen on last year’s Light Side of The Moon. In a reversal of the iconic Moonwatch design, the dial is a crisp white with black hands and markers. The hands are lumed as normal, but take a closer look at the markers, which feature a black center with a luminous surround. The look is pure Speedmaster, but with a welcome twist. 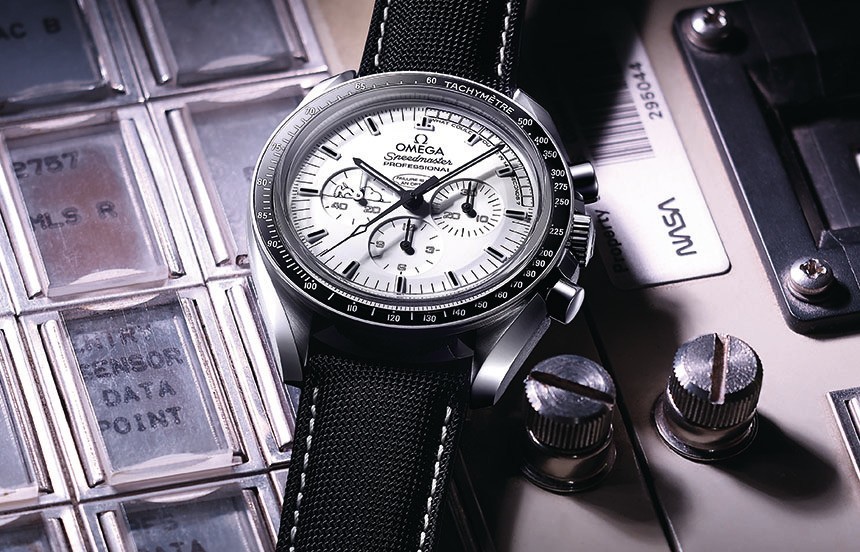 As an additional bid to tug at the heartstrings of collectors world-wide, the Omega Speedmaster Apollo 13 Silver Snoopy Award Limited Edition is powered by Omega’s calibre 1861 hand-wound chronograph movement, the same movement that powered the watches used for Apollo 13. The 1861 is a 3Hz cam-actuated chronograph with a 48-hour power reserve.