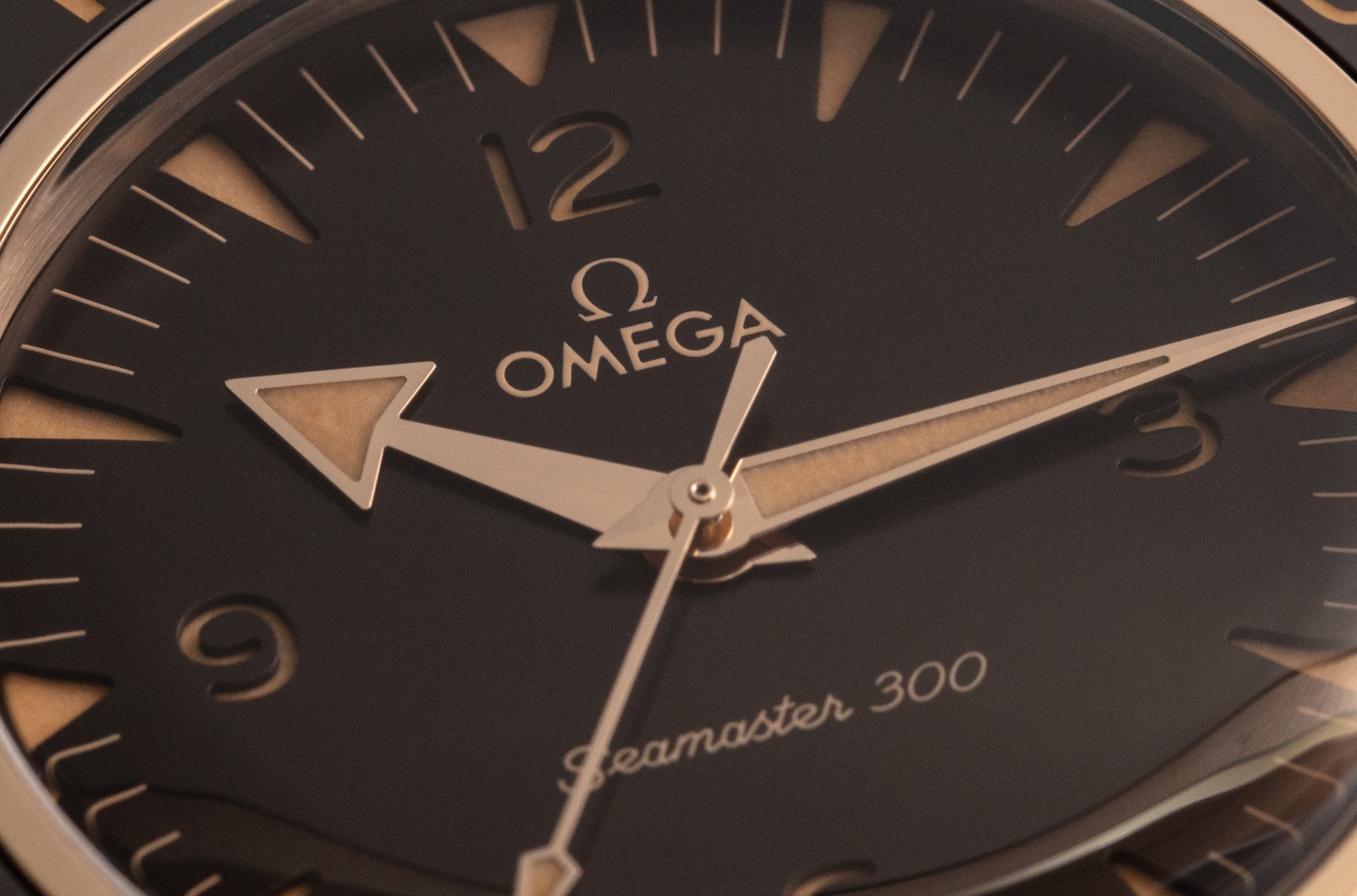 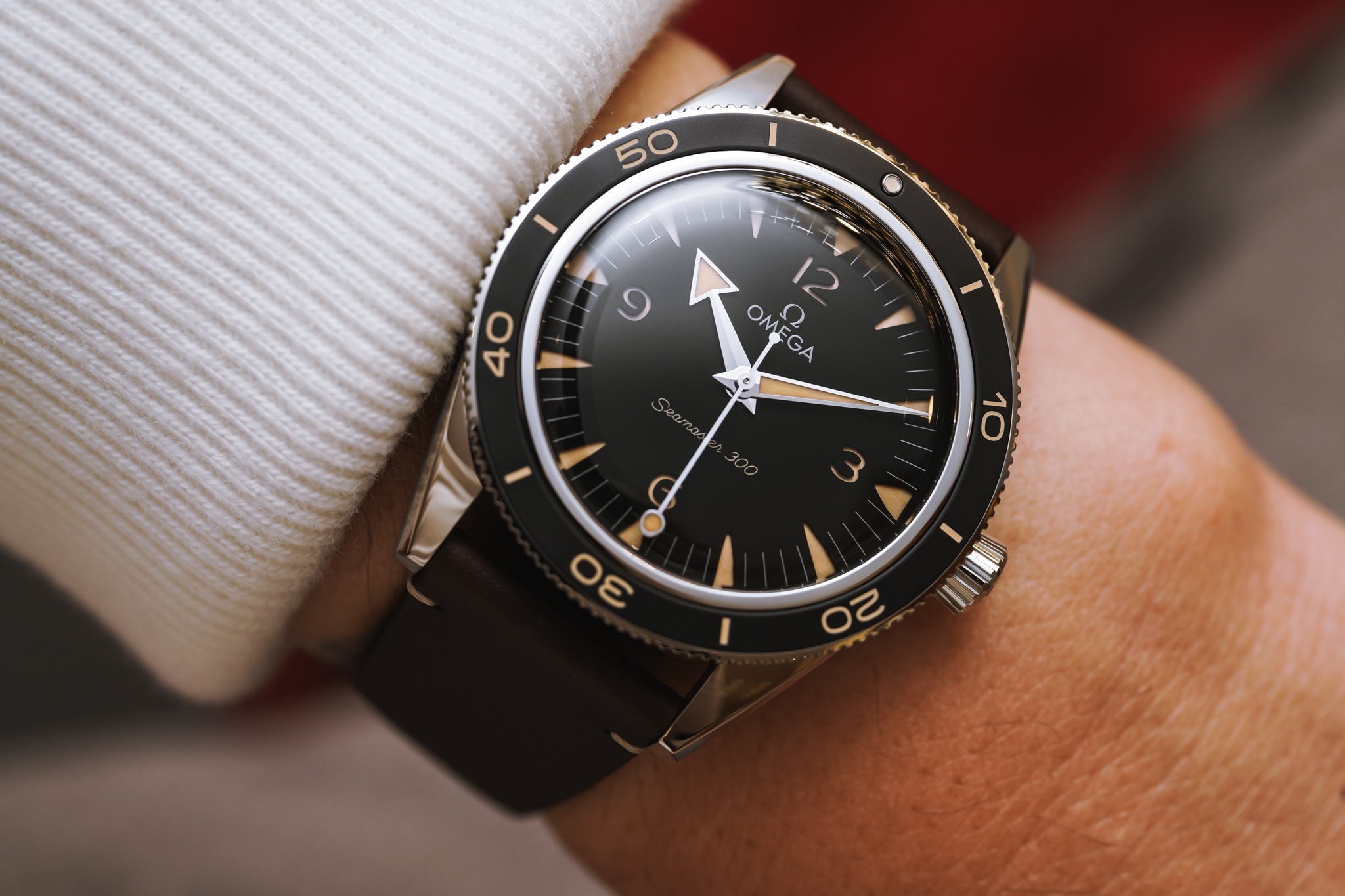 One of my favorite things about Omega is that the brand is constantly tinkering. Always turning knobs, always experimenting. Sometimes it’s in the pursuit of producing a more lasting product, and sometimes it feels like it’s just tinkering for the sake of tinkering. Forget changing the color of a single line of text on the dial, increasing a case by a single millimeter, or just giving us the tired “same-but-blue” treatment, Omega’s changes – particularly when it comes to the many references under its Seamaster umbrella, are rarely incremental. However, sweeping as the updates often tend to be in transition from generation to generation, they are also rarely done without merit or at least consideration of the end consumer. Side note: I fully realize that it’s a bit ironic for this to be my own perception of the brand, when the classic Speedmaster Professional Moonwatch (until this year, of course) enjoyed a bit of a reputation for going largely unchanged for as long as many of us have been watch fans. 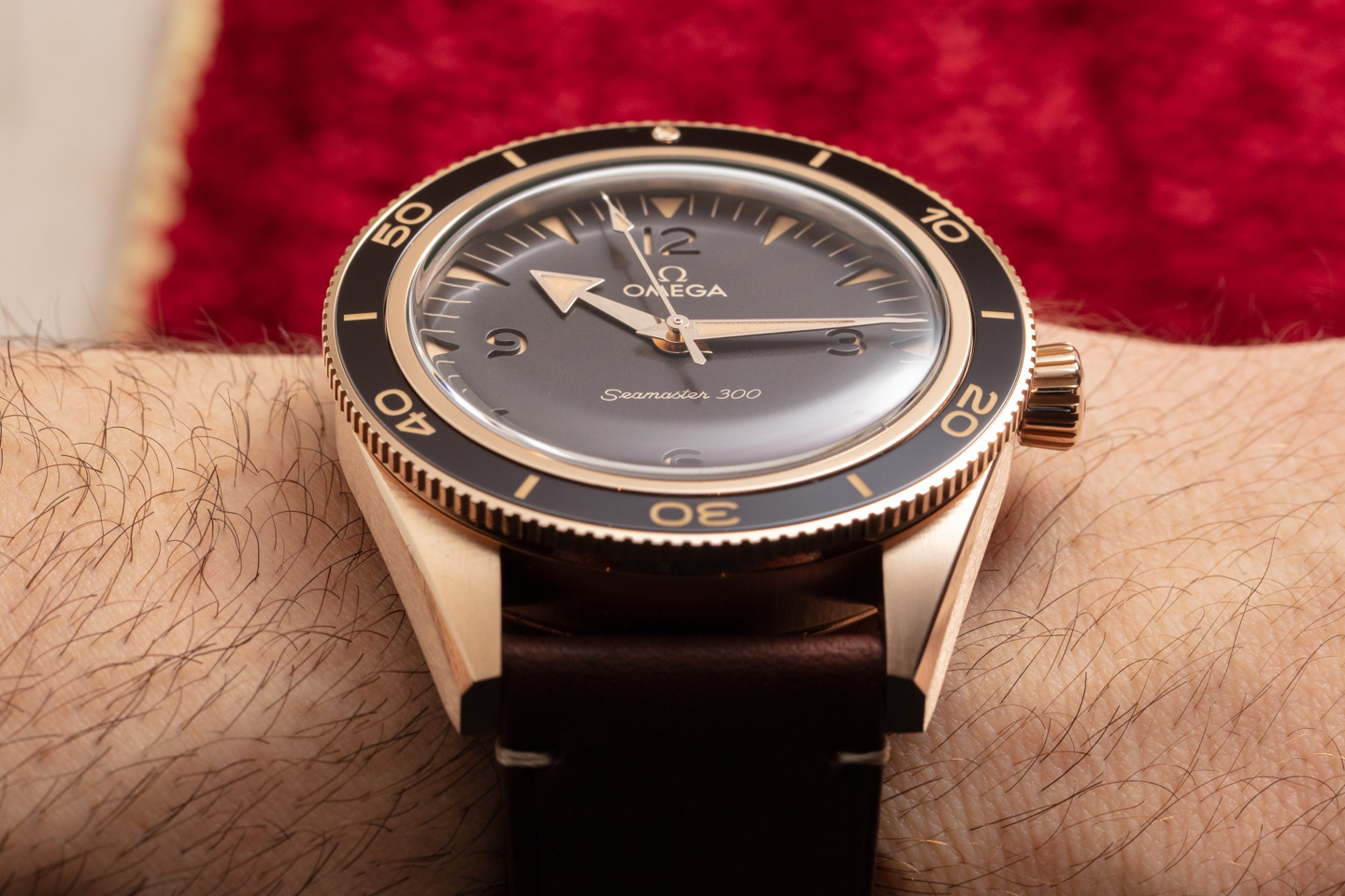 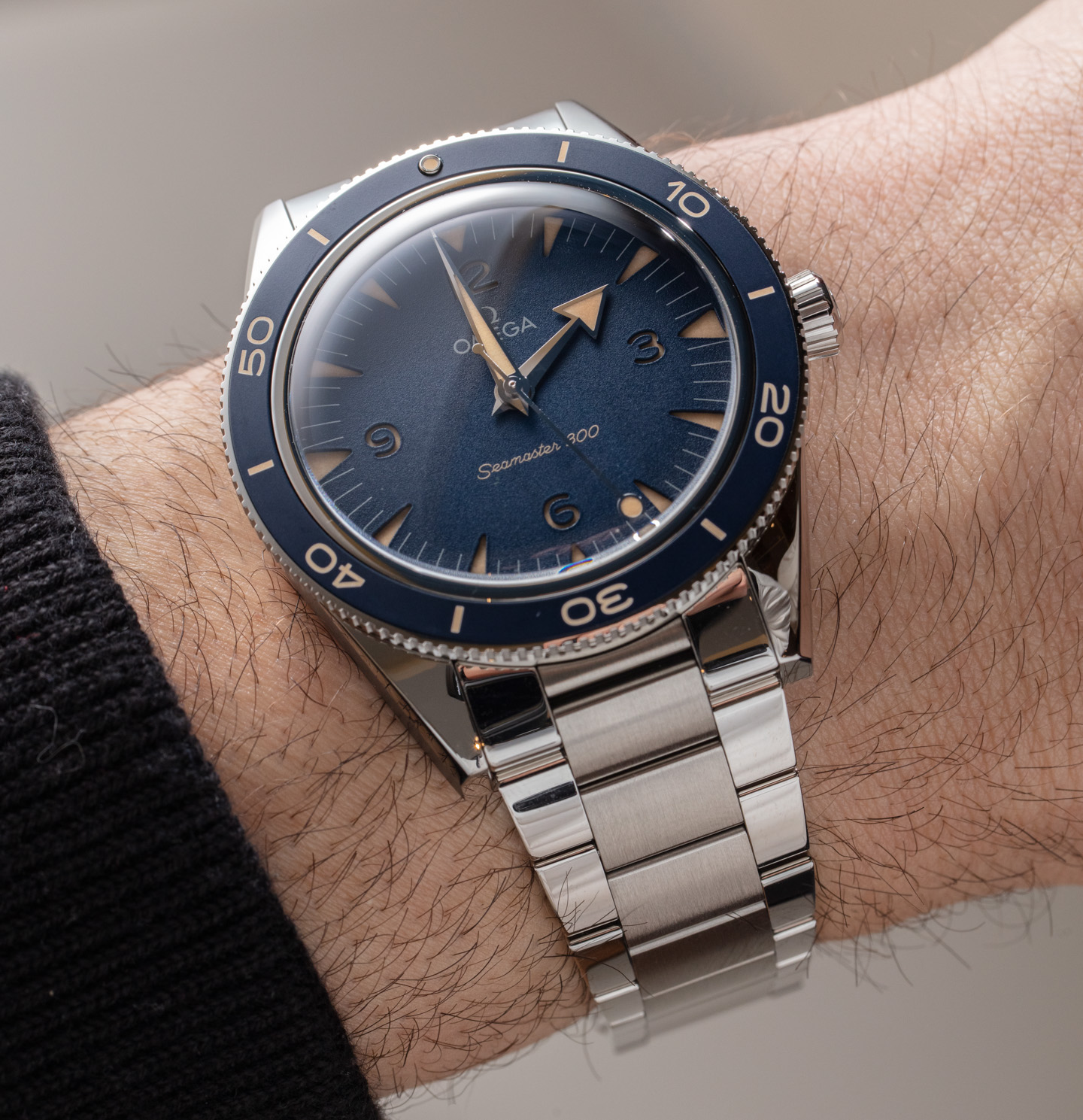 Case in point: the trio of brand new Seamaster 300 references, which update the vintage-inspired Seamaster 300 Master Co-Axial collection introduced in 2014 with an even more wearable new 41mm case, and a fresh dial & bezel, all powered by Master Chronometer automatic movements. Omega’s metallurgists even whipped up an entirely new semi-precious case material called Bronze Gold, which at first glance feels a little bit like an ‘also-ran,’ but then you realize that Omega is skipping the bronze trend entirely by offering something totally new. See, this alloy is unique in that it provides the warmth of color and gentle aging properties of bronze over the long term without yielding any of the unsightly green oxidization in the process – a pretty common side effect of most marine-grade bronze alloys. To get there, Omega developed its own hybrid alloy from copper, gold, silver and palladium.

The end result is an amber-colored (think of it on the color spectrum as the halfway point between Omega’s yellow Moonshine gold and its Sedna rose gold) 9k gold watch which uses less than half the amount of solid gold found in a comparable 18k Seamaster 300. Thusly, the watch is slightly heavy only relative to its steel counterparts (98 grams for the Bronze Gold watch head vs. 86 grams for the steel), and definitely lacks the very tactile “oh wow” factor that a traditional solid gold diver tends to elicit on the wrist. It also comes in at well under half the cost of a solid gold watch – at just over $11,000 for this reference on strap. And in a particularly clever twist, the Bronze Gold case frames a brown dial that has been subtly pre-aged from CuSn8, which is the more traditional bronze alloy used in many dive watch cases – just not this one. 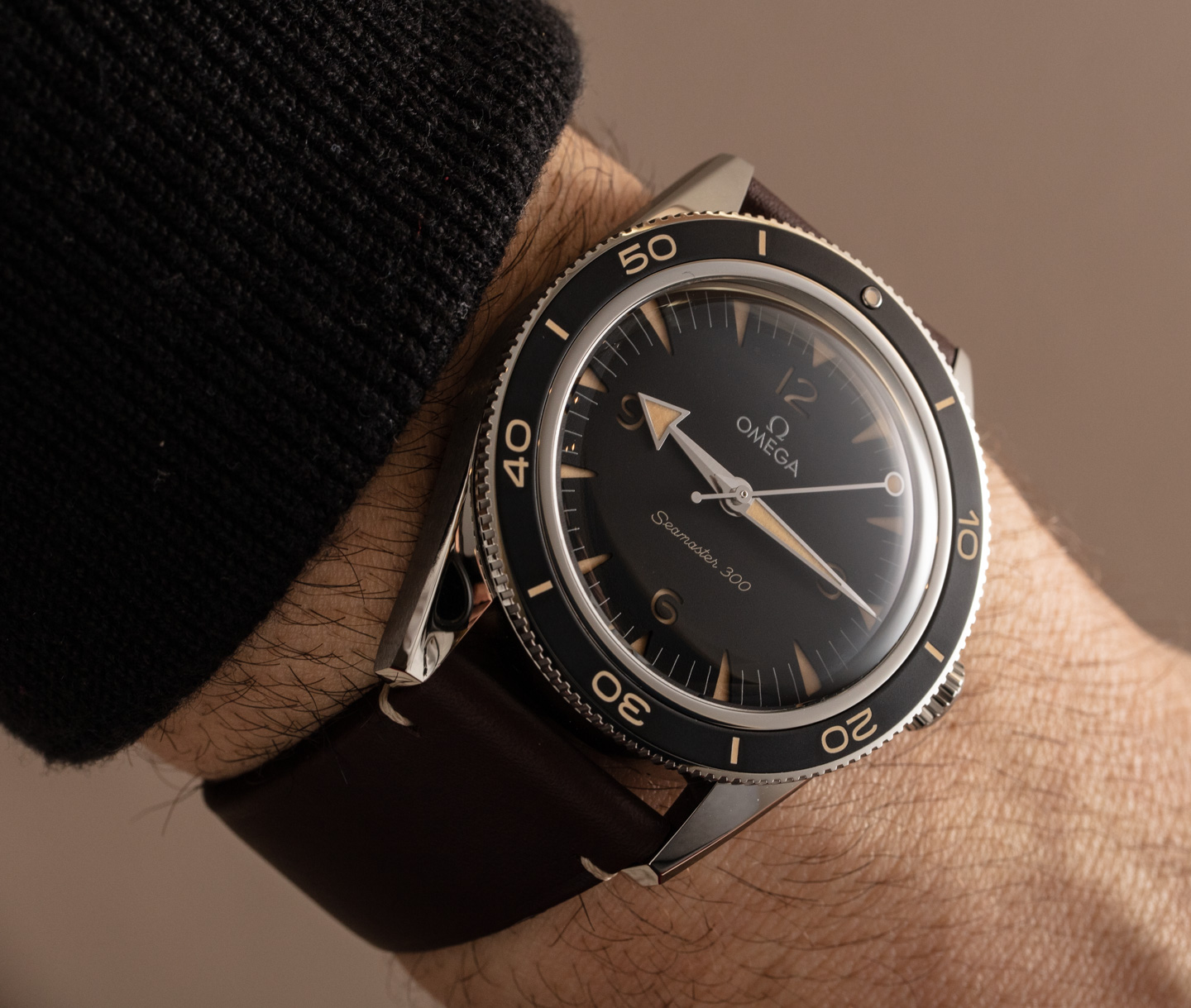 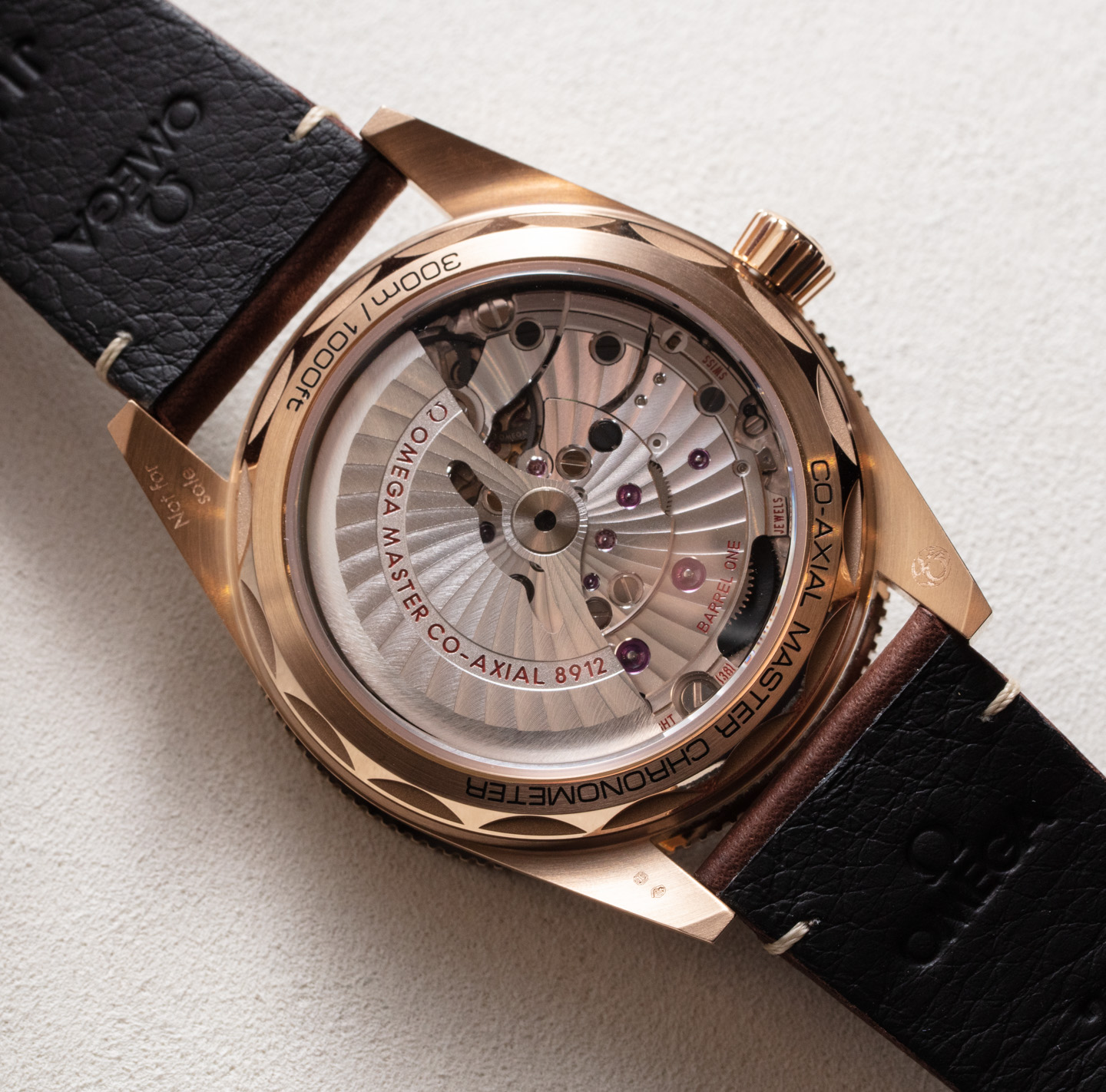 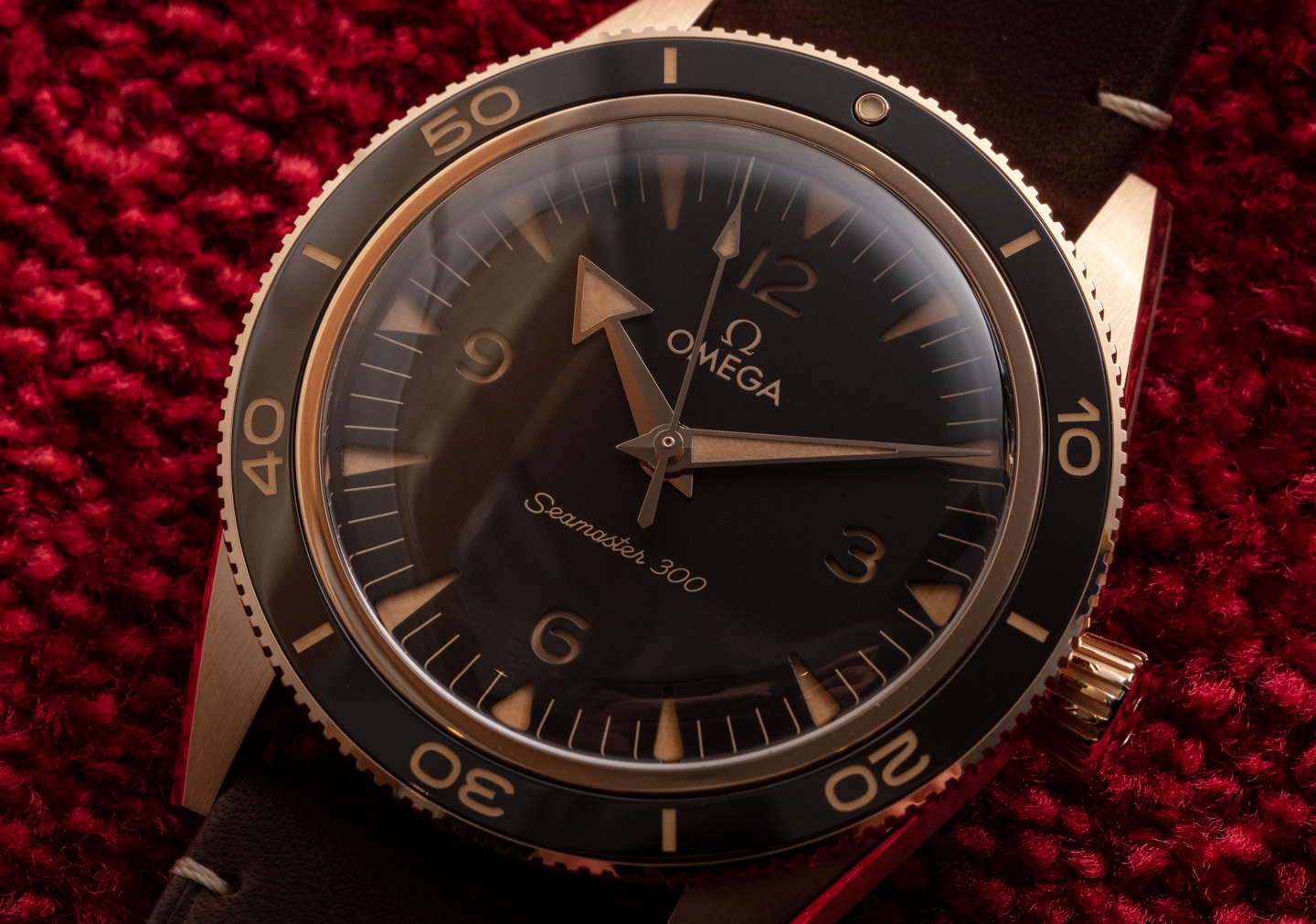 Omega was wise to preserve the visual identity of the 2014 Seamaster 300 – it was, after all the brand’s first truly modern ode to its single most important diving reference introduced back in 1957. So naturally some of the codes from that reference persist – the sandwich dial, the straight lugs, the ‘broad arrow’ handset, and the flat-link style bracelet. However, nearly all of those elements have been tweaked somewhat: the 12-3-6-9 hour markers are now part of the dial’s luminous cutaways, the handset is complemented by a fat lollipop seconds hand (a very cool touch cribbed from the popular Seamaster 300 ‘Spectre’ from Bonds’ past), and the bracelet now gets a brushed centerlink and polished outer links – opposite from the outgoing reference, and likely a direct response to collector feedback, many of whom simply brushed the centerlinks themselves out of preference for a less scratch-prone surface. Most of the dial text has been scrubbed as well, leaving only the brand wordmark and the name of the watch itself, producing a cleaner, more minimalist look that enables the timekeeping elements to remain the dial’s key focal point. 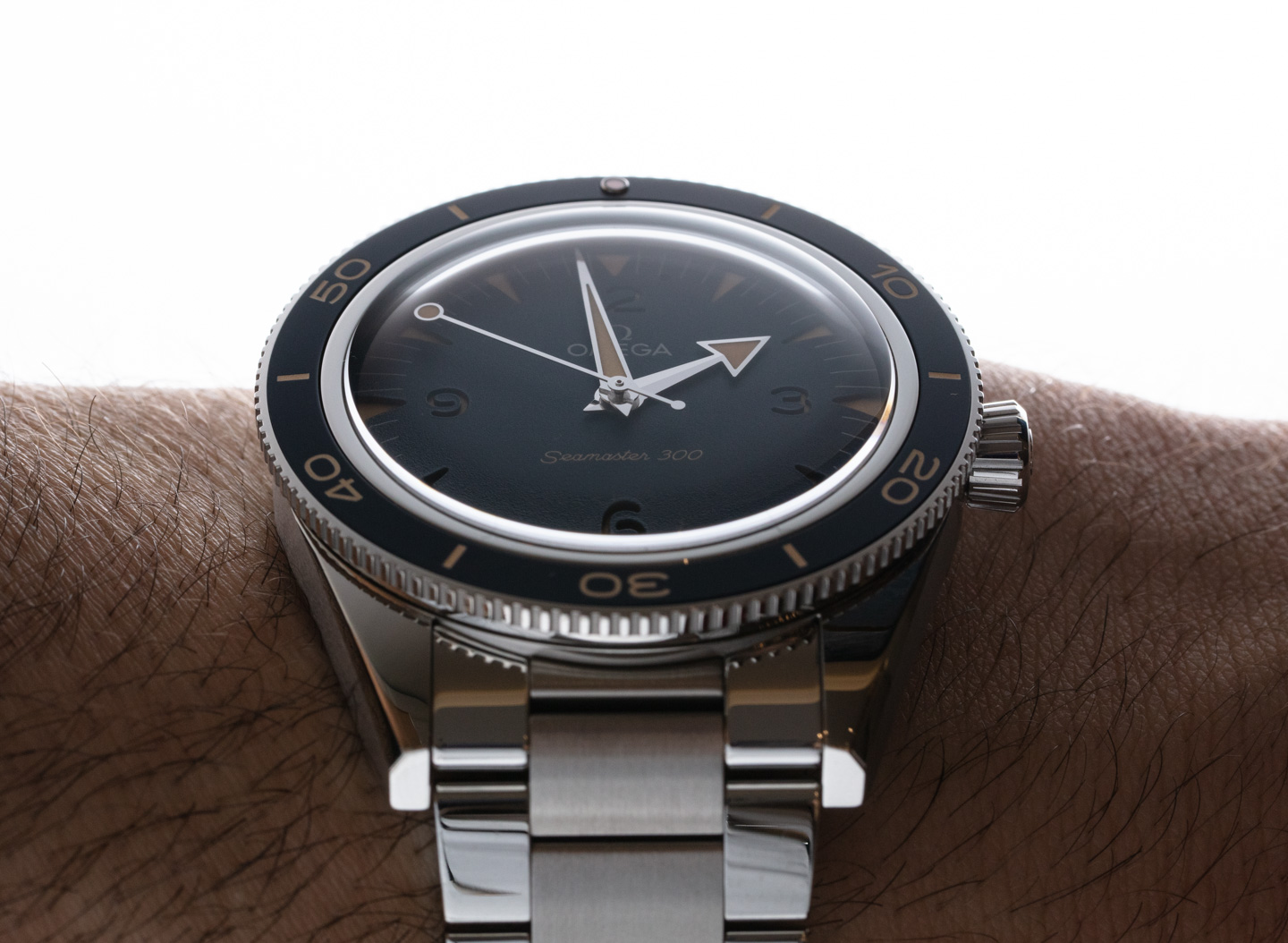 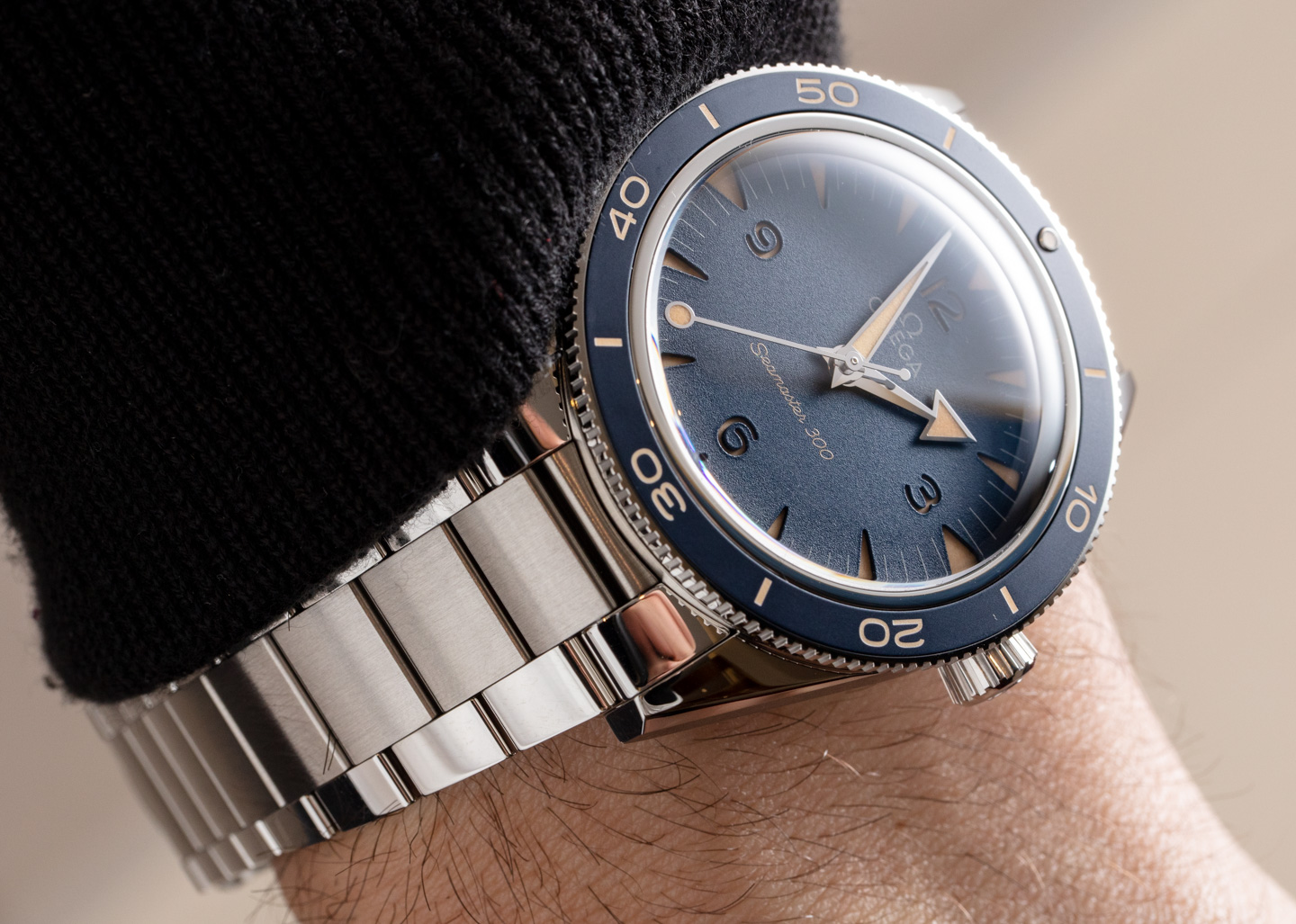 Perhaps the biggest visual update to this reference and a departure from the source material though is in the thinner bezel profile – an adjustment which, in concert with the reduction in dial text, dramatically increases the overall dial aperture. And on the two stainless steel variants, the bezel itself is also no longer Liquid Metal, but instead a highly scratch-resistant anodized aluminum – not unlike what we saw in the “No Time to Die” Seamaster from the end of 2019. The Bronze Gold variant gets a dark ceramic bezel insert instead. Lastly, and arguably most importantly, the lugs and the bracelet endlinks have also gone back to the drawing board. The lugs themselves have been reduced in length, and the bracelet endlinks – similar to what Omega did with the Planet Ocean redux in 2016 and the subsequent Aqua Terra updates – now drop the bracelet in a straight line over the wrist, reducing the overall lug-to-lug length considerably. I didn’t happen to have a pair of calipers in my camera bag, but the difference in the wearing experience between the new and old references is both dramatic and very welcome. 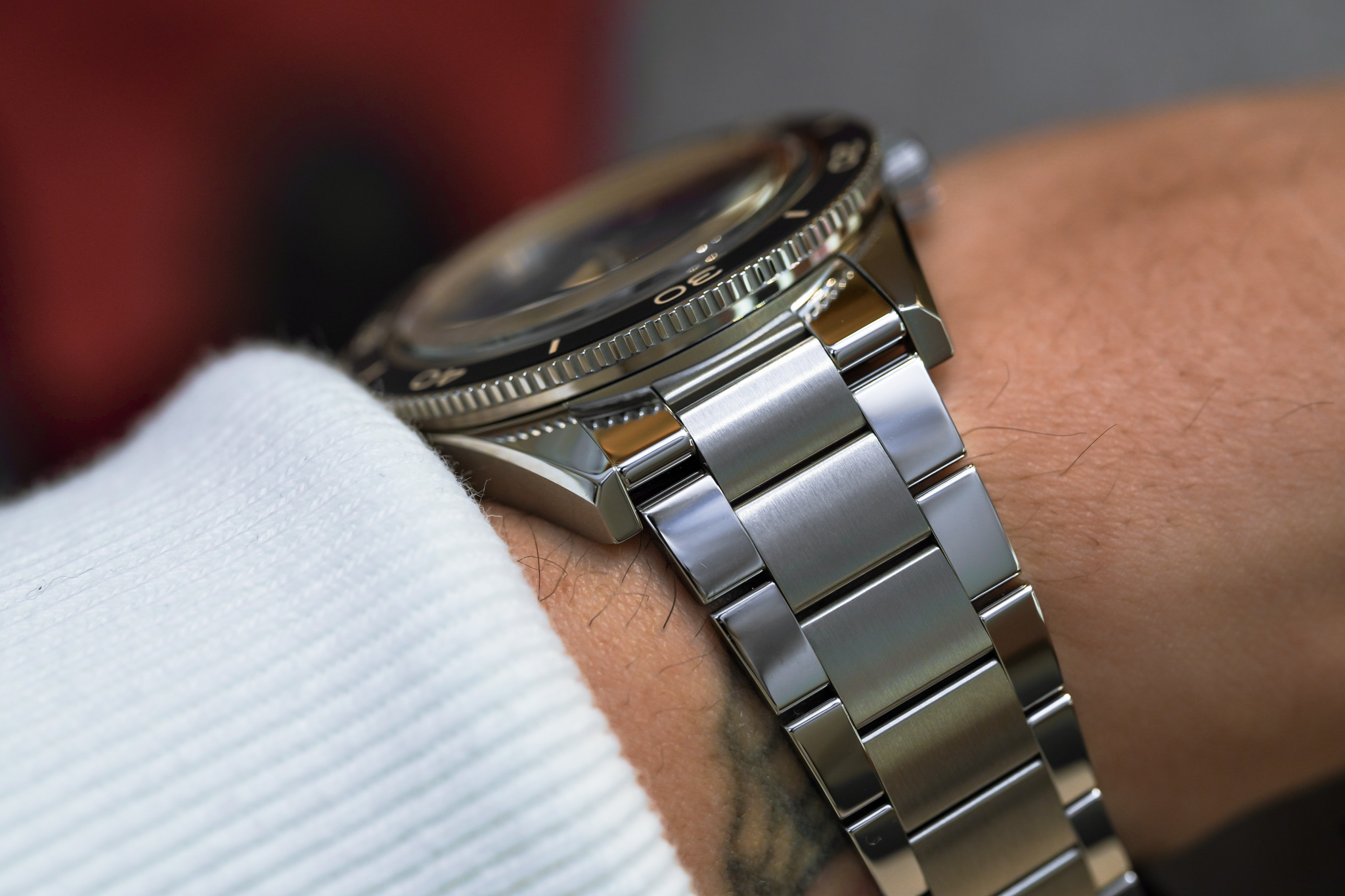 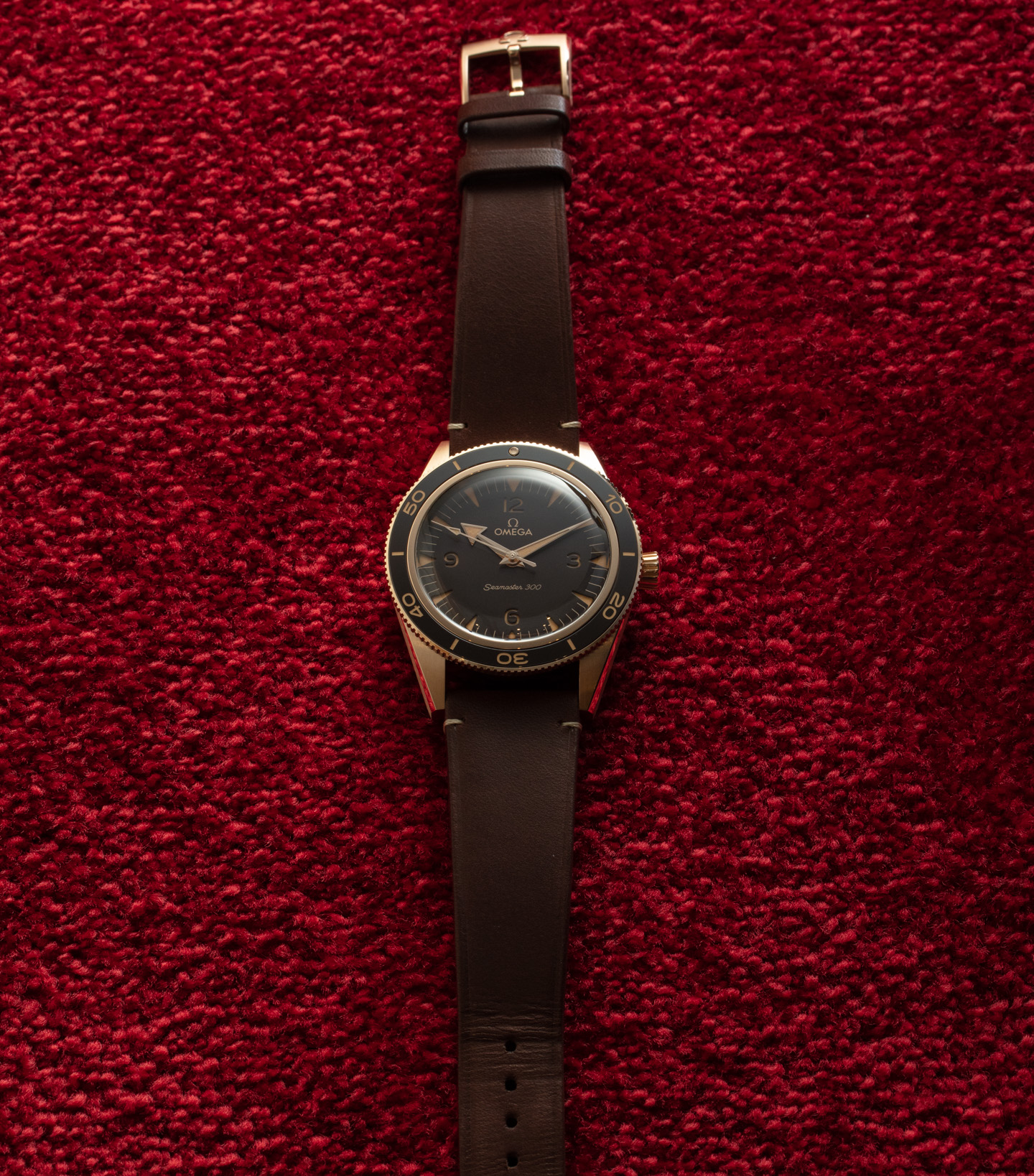 One of my favorite signatures of the Seamaster 300 has always been its side profile – which remains rich with texture and variation between its brushed and polished edges, the dramatic dome of the crystal emerging from the coin edge of the bezel, and the wave-shaped outer edge of the screwdown caseback sandwiching it all together. The watch is still relatively tall like its predecessor, but again, given its dramatically reduced footprint across the wrist, I actually quite like the stance now, which feels much more planted and stable, yet still somewhat assertive at 14mm thick – it is a dive watch after all.

The outgoing Seamaster 300 was one of the last holdouts to not yet receive Omega’s latest METAS-certified Master Chronometer series of calibers – a situation which is now rectified with the new trio of references powered by the 8912 movement, which is an anti-magnetic, double-barreled calibre with 60 hours of power reserve and Omega’s handy ‘Time Travel’ quick-set adjustable hour hand feature. It’s known as being a slightly thicker movement when it’s expressed in some of Omega’s larger modern watches, but personally, I prefer the 8900 series over the 8800 series movements for the extra bit of power reserve and the aforementioned quick-set. Regardless of where your preference lies, these Master Chronometer movements are all truly next-level industrialized calibers, and together with improvements in overall wearability, help the Seamaster 300 rise well above comparable vintage-inspired darlings like the Breitling Superocean 57 and Tudor’s Black Bay 58. 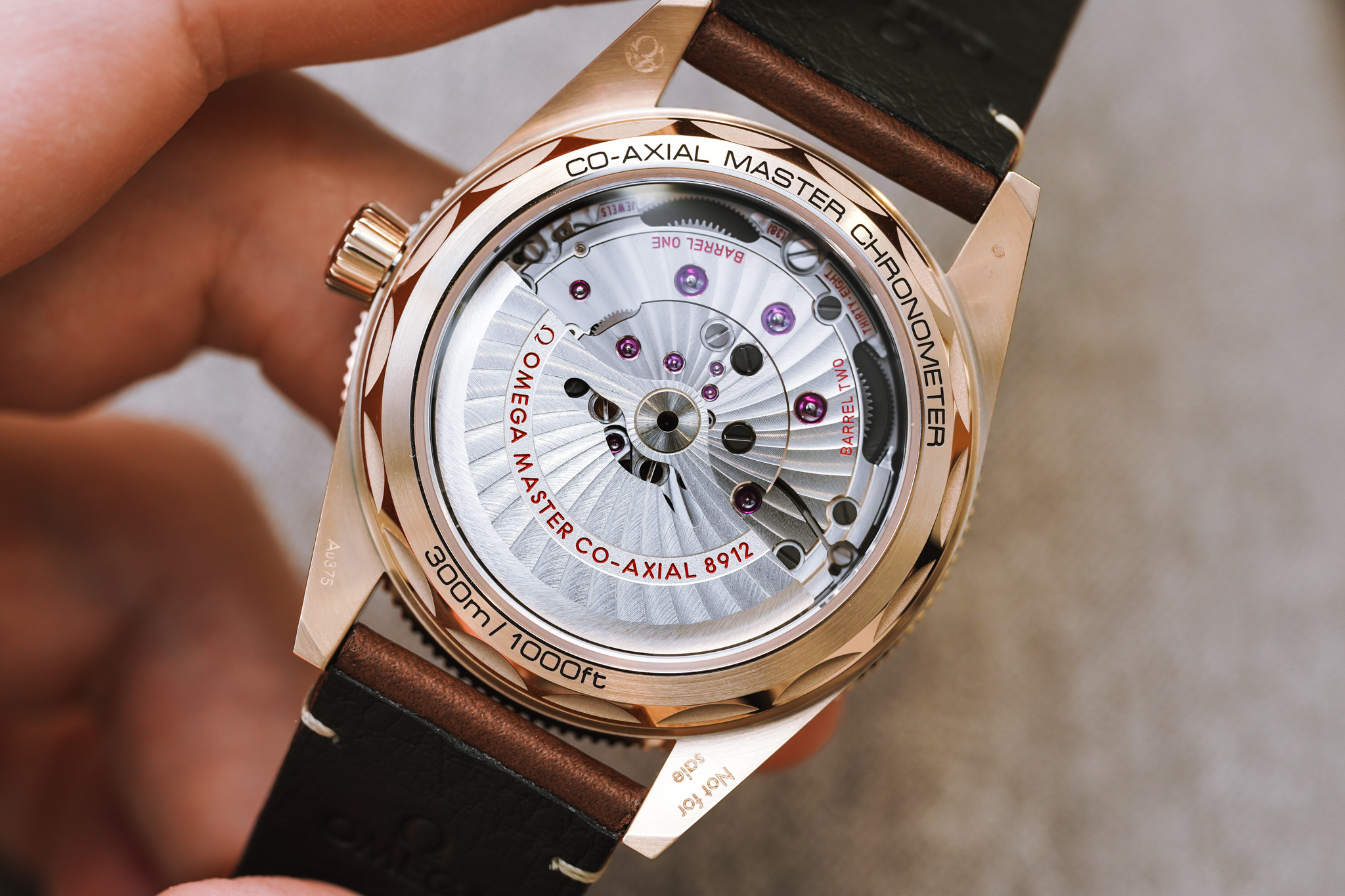 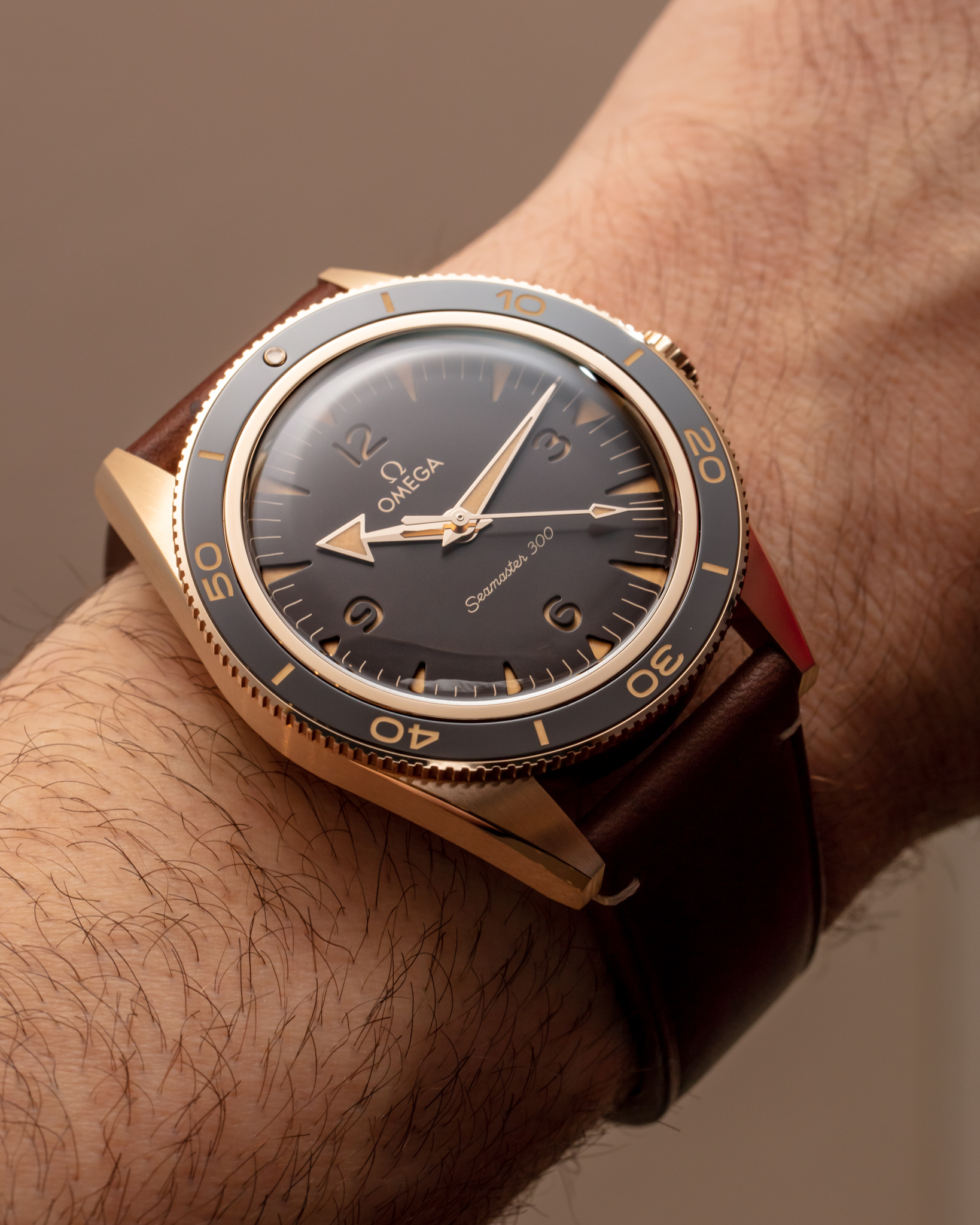 Word on the street is that this Seamaster 300 update was originally slated as a 2020 release for Omega, but the brand scaled back its offerings last year in light of the pandemic situation, so it could be safe to assume that these watches have just been waiting in the wings and will be hitting retailers very soon – well in time for (fingers crossed) the delicious possibility of summer travel to warmer climes and far-flung dive destinations. Price begins with the steel on strap Seamaster 300 reference 234.32.41.21.01.001 at $6,150 USD. The Reference 234.30.41.21.03.001 in steel with the blue dial on the matching bracelet is $6,500 USD. The Seamaster 300 reference 234.92.41.21.10.001 in Bronze Gold is $11,200 USD. Learn more about the new Seamaster 300 watch collection at the Omega website here.