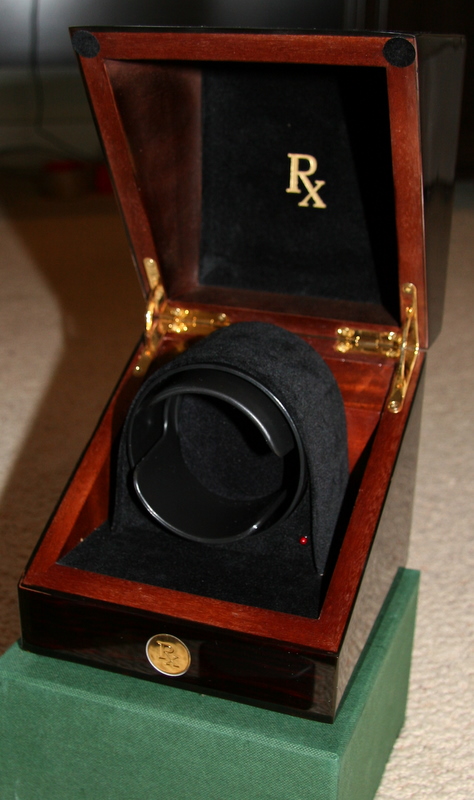 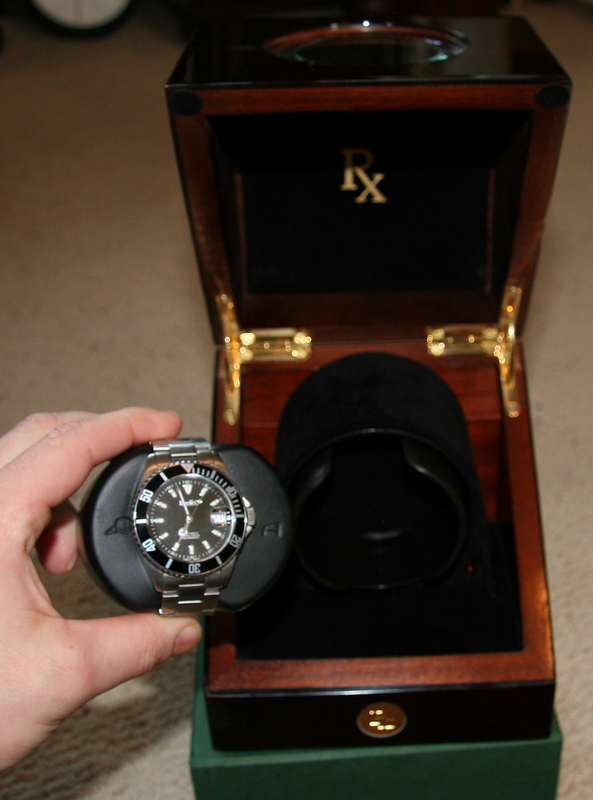 Orbita is a well regarded watch winder manufacturer here in the US, as many of you know. They recently released their Privee RX single watch winder to a limited number of people for a discounted price. I was eager to get my hands on one of these luxury watch winders as I could never pay the retail price of most luxury watch winders, which is in the several hundreds to thousands of dollars.

The Orbita Privee RX, which I will refer to as the “RX” was originally designed to be sold with a Breguet logo, but the deal went sour with the Swatch Group. Having designed the winder, Orbita decided to market it directly to the consumer. Frankly, I think this is wise, I only wished the RX was a better winder. I cannot speak for any other Orbita winder, as I hear generally good things, but the RX is a sub-par watch winder in design and function. Frankly, my investigation of other Orbita watch winders yielded positive results for the most part, and this review strictly concerns this one model.

The packaging of the Orbita RX is well done. It is like un-boxing a watch, expect that there is no watch inside. The entire winder is cased in a nice green box, which opens to reveal the winder inside. The first thing you experience is the thick smell of wood lacquer, an asset linked to the best part of this watch winder. Included is also some paper work, a CD-ROM, and a small screw driver. There are no printed instructions.

I will start by mentioning my favorite part of the Orbita Privee RX, and that is the wood. Available in several types of wood, I chose mine in Macassar, which is a very expensive exotic wood. This fact is clear from just looking at it. The wood and finish would be at home in a nice automobile, or elsewhere. I’d love to own some Macassar furniture, only I hope they do their jobs better than this watch winder. Closed, the RX is roughly a square box with a port hole. I am not sure what the port hole window is made out of, possibly glass, maybe mineral glass. I don’t think it is plastic, and I highly doubt it is a sapphire crystal due to expense. As you can see in the pictures, it looks great. Tasteful and classy with smooth lines. This is a nice looking watch winder, to give praise where it is due. Also on the front of the winder is a gold-toned circle with the “RX” stamp on it. There are no other holes or switches on the outside.

Open the hatch, and you see the single winding module and some black velvety material. Still no switches, but there is a red LED light. The main purpose of this area is to house your watch while you are winding it. But there is some room around the side to place such items as a cleaning cloth, extra watch straps, and the little supplied screw driver. To be effective, the actual watch winding module must be quiet, and entering and removing a watch must be simple, quick, and pose not threat of damage to the watch or winder. The RX does not excel or convey a sense of reliability in any of these areas. 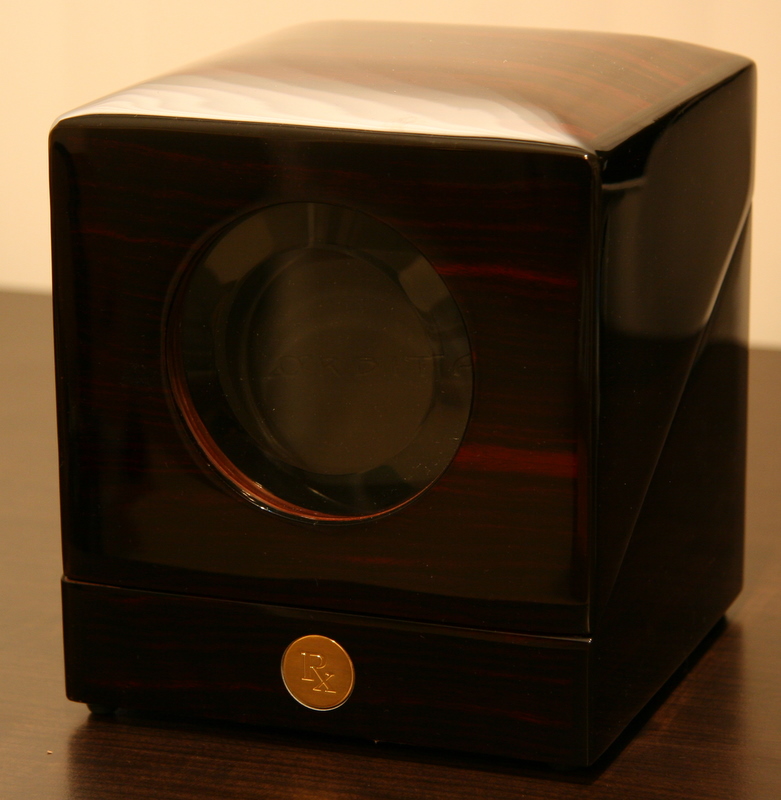 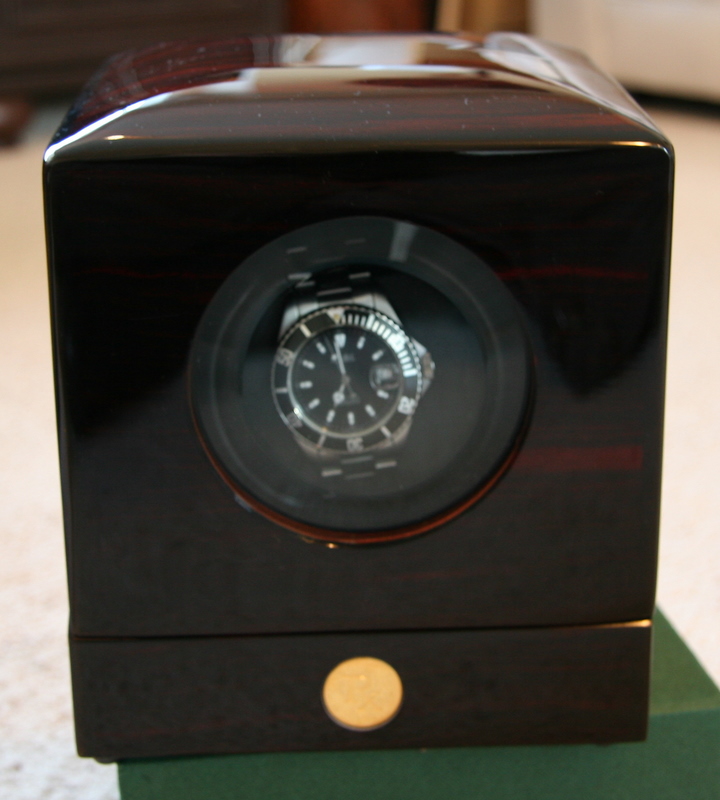 I will take this opportunity to mention the first major areas I noticed poorly done on the RX. The gold-toned hinge on the hatch, looks decent, but rattles like there is a loose piece, even with gentle use. I’m not expecting a submarine quality latch here, but it should not jiggle around so easily when opening and closing the box. The whole idea is to impart an element of wealth to the experience of putting in and taking out watches. If you have an expensive watch, you want to give it a luxurious home. Maybe this is a unjustified opinion, you can decide, but it does not seem as though it would have required a great feat of engineering to design a better hinge, especially from a company with so much experience in the area.

To put a watch in the winder you remove a very stubborn foam brick. The brick is actually made our of Elastomer, and probably should be called a block, but I will call it a brick because it more or less has that shape thought it is a bit rounded. I mean the brick is really stubborn to remove. I was nervous that removing this piece of foam was going to damage or tear out the winding module (which does not feel very secure). I finally managed to get it out, and thought to myself how a watch is going to fit in there with our Elastomer securing companion. The foam piece is meant to contract when pressed as different sized watches are placed around it. For the test I used a Marcello C Nettuno 3 watch that has a steel bracelet. It required too much effort to close the clasp of the bracelet and was afraid it was going to tear the foam. The foam was unharmed, but it is entirely possible that with continued use, the Elastomer brick will tear. There are other materials that can be used for this such as firm pillows, I have a feeling use of this material as the securing block as due to cost.

Placing the brick back inside the winding module was not particularly fun, but I managed to get it in there. Once I did, the watch looked comfortable and appealing against the black velvet. And when you close the hatch, the watch face is nicely visible through the port hole window. When I removed the watch from winder, I again feared for the watch and the winder. Once I got it out, I found that a piece of black velvet material came right out of the module. It apparently was not even glued or secured into place, and was used to cover a retaining screw that could easily damage a watch bracelet or clasp. I used some tape to keep the thing in there. I next tested the winder with a larger watch that had a bigger strap. After jamming the watch in the winding module, I found that I could not even close the hatch as the watch was hitting the top of the winder case. So much for being useful for all watches. The main point is that the Orbita RX Privee is made for just the right sized watch, not too big, not too small. 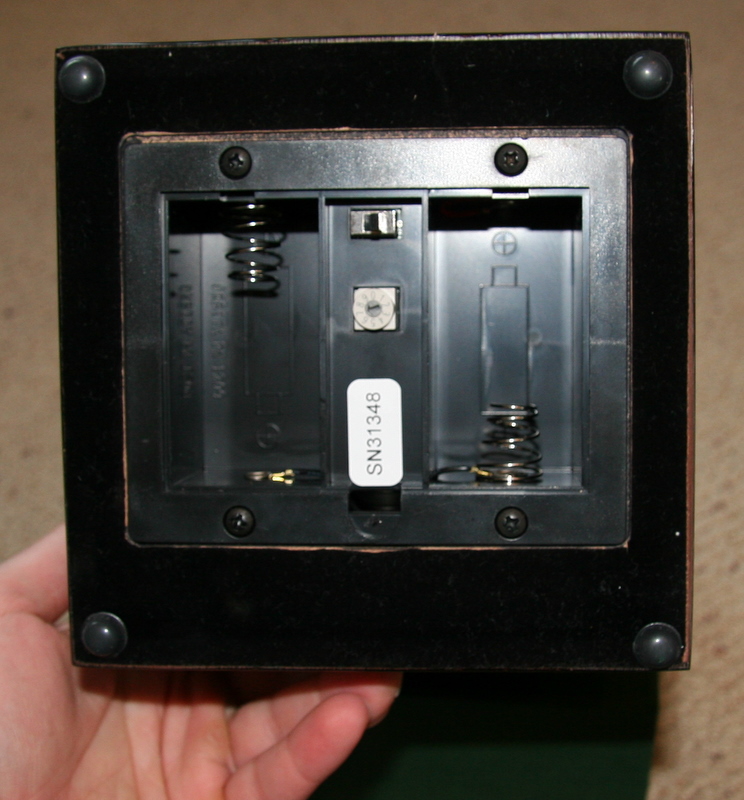 Now on to operation. Underneath the winder is a plastic panel that has a tiny on and off switch, and that opens up to reveal two places for D batteries, and a small 6 position knob (that is so small, Orbita added a small plastic screw driver to adjust it). Now, this area looks like a collection of pieces that Orbita took right out a parts bin. No thought for ergonomics or ease of use, just what will fit and do the job. For instance, the 6 position knob changes the rotation program. Is there any legend or explanation there? No, you have to look through the instructions on the included CD, which are a highly repetitive 154 slide PowerPoint presentation. There are settings for clockwise and counter-clockwise, along with a number of different rotation frequencies. Unless you are intimately aware of your watches’ needs as though they are surrogate children, you will need to access some database with “thousands of watch models” to determine the right setting. You can typically easily figure out which direction to set it, but the rest is a headache, and forget about having watches share the watch winder, you’ll need to adjust the tiny adjustment knob each time. Why this knob is not larger, more obvious, and inside the case is a mystery to me. Actually, I know why, it would have required engineering and custom part making, that would have not allowed Orbita to use cheaper, more generic parts. This isn’t so much a criticism to Orbita, as a gaping question in logic as to the intended sophistication of a buyer purchasing (what will be the retail price) a $600 watch winder. I would not accept this level of quality from such an expensive watch winder. Then again, most other Orbita watch winders go for much, much more. At this time I cannot explain these costs as they often seem to be arbitrarily high. 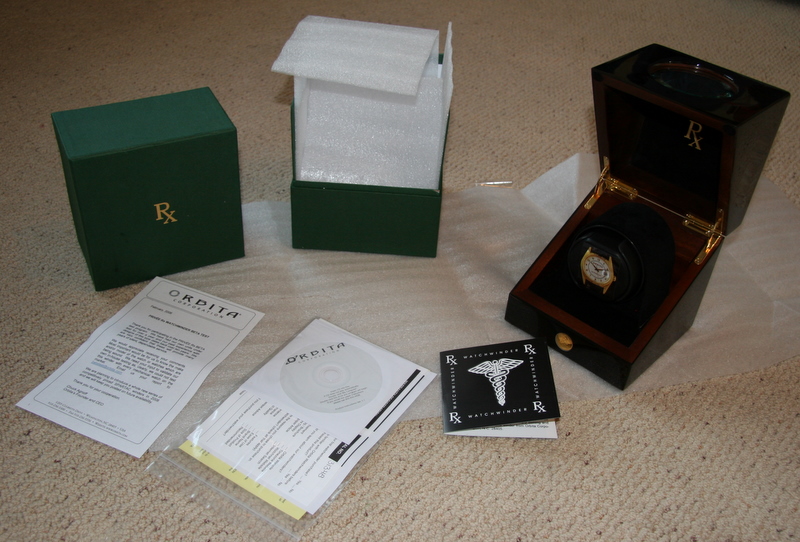 As I indicated above, the actual watch winder functionality in the Privee RX watch winder suffers greatly from the major difficulty in placing and removing a watch, along with the unintuitive set up and and maintenance. If you are going to have a battery operated watch winder, at least have a clear external display that tells me when I need to replace the battery. Further, why is there no AC adapter? It is too big to be a travel winder. Most if these issues ought to have been obvious to Orbita, so it is a quandary how this winder even made it to production.

So when it comes down to it, the Orbita Privee RX is a pretty box with not much going on inside. The major issues are the unpleasant operation, no AC adapter option, flimsy construction inside, and illogical operation. The watch winder does work. And it is relatively quiet in operation, I do admit. But the short comings for me, really outweigh the benefits, especially for the price. When you can get about 12 Chinese made watch winders that arguably work better, why pay this amount? To reiterate, this watch winder does not seem to be a good example of what Orbita typically produces, as they have a number of well-received watch winders. Though, seeing this winder has made me reconsider the design and marketing process at the company, and I’d like to hope they dedicate more resources in the future to releasing watch winder that are less ill-conceived as the Privee RX seems to be a step backwards for Orbita.