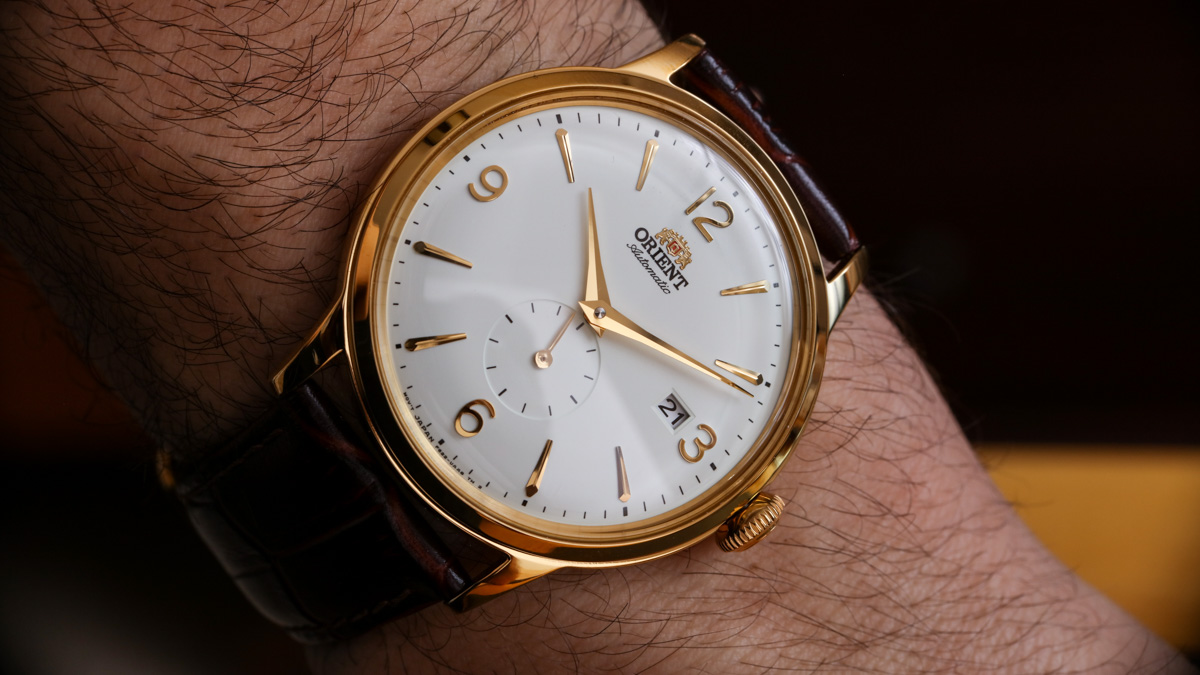 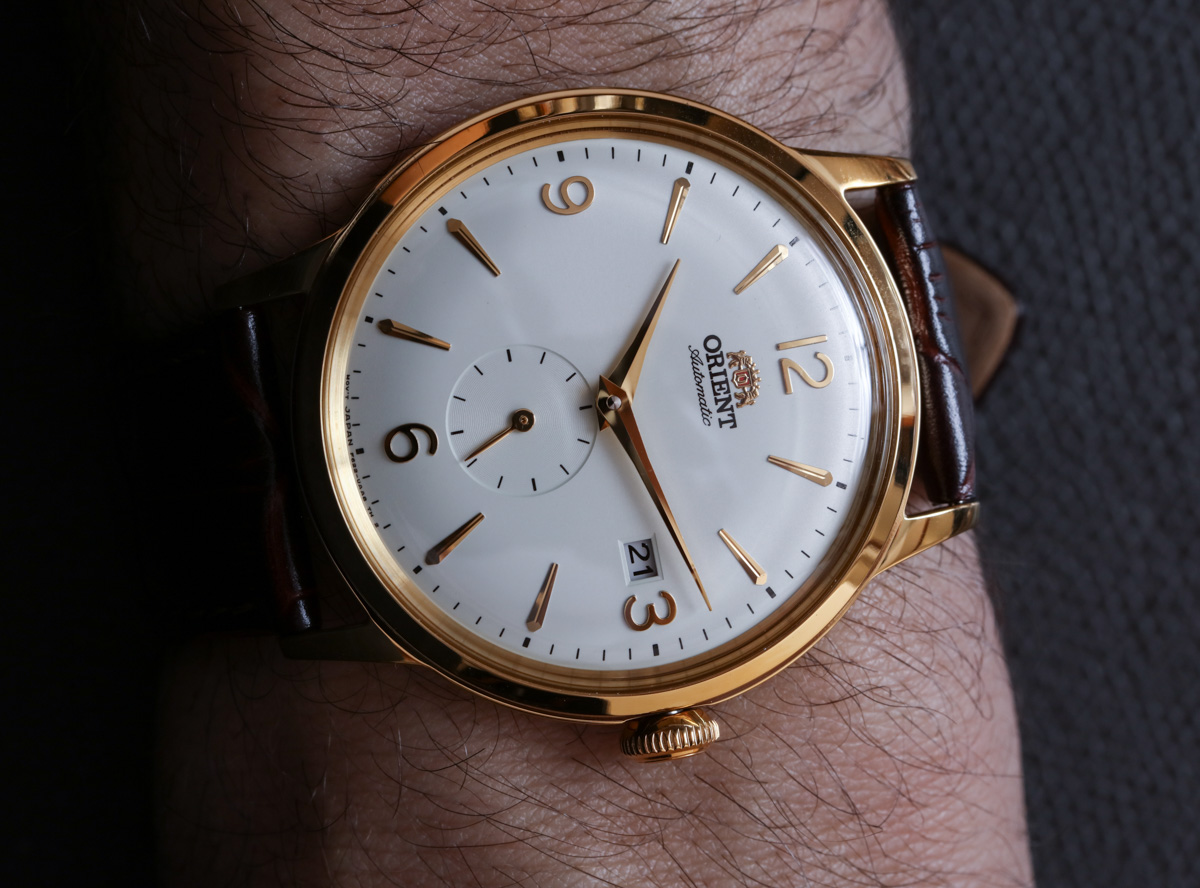 In the context of timepieces “cheap” usually isn’t a word you want associated with a nice object meant to be worn on your wrist. I don’t use the term lightly because this IS a product even those with extremely expensive timepieces can really appreciate. The new for 2018 Japanese Orient Bambino Small Seconds (SS) is only cheap in price – but certainly not quality or character. Let’s take a look at how Orient took what we feel is the best budget dress watch around (aBlogtoWatch article here) and made it a whole lot better.

Japan’s Orient has been around since 1950, but is more recently part of the larger Seiko conglomerate of brands. More specifically, it is part of the Epson family of brands, which includes Seiko and Grand Seiko. Orient’s strengths are in its ability to render European-style classic watch designs in extremely good packages for the money. The Bambino SS models (at debut there are five different versions as the references RA-AP0001S10A, RA-AP0002S10A, RA-AP0003S10A, RA-AP0004S10A, and RA-AP0005B10A) are priced at either $305 or $325 USD per watch – and in my experience I’ve not seen anything else as nice out there. I’m actually impressed that this isn’t just a Bambino with an upgraded movement, but a Bambino that in my opinion feels upgraded in a lot of areas. 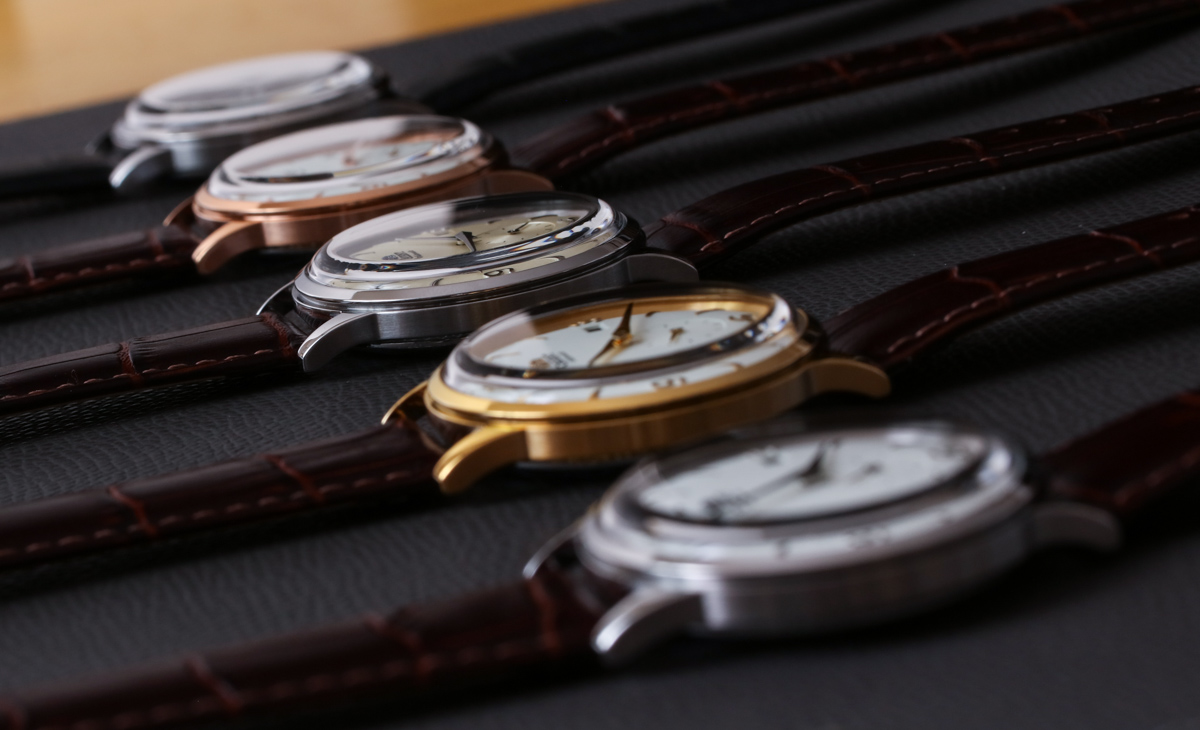 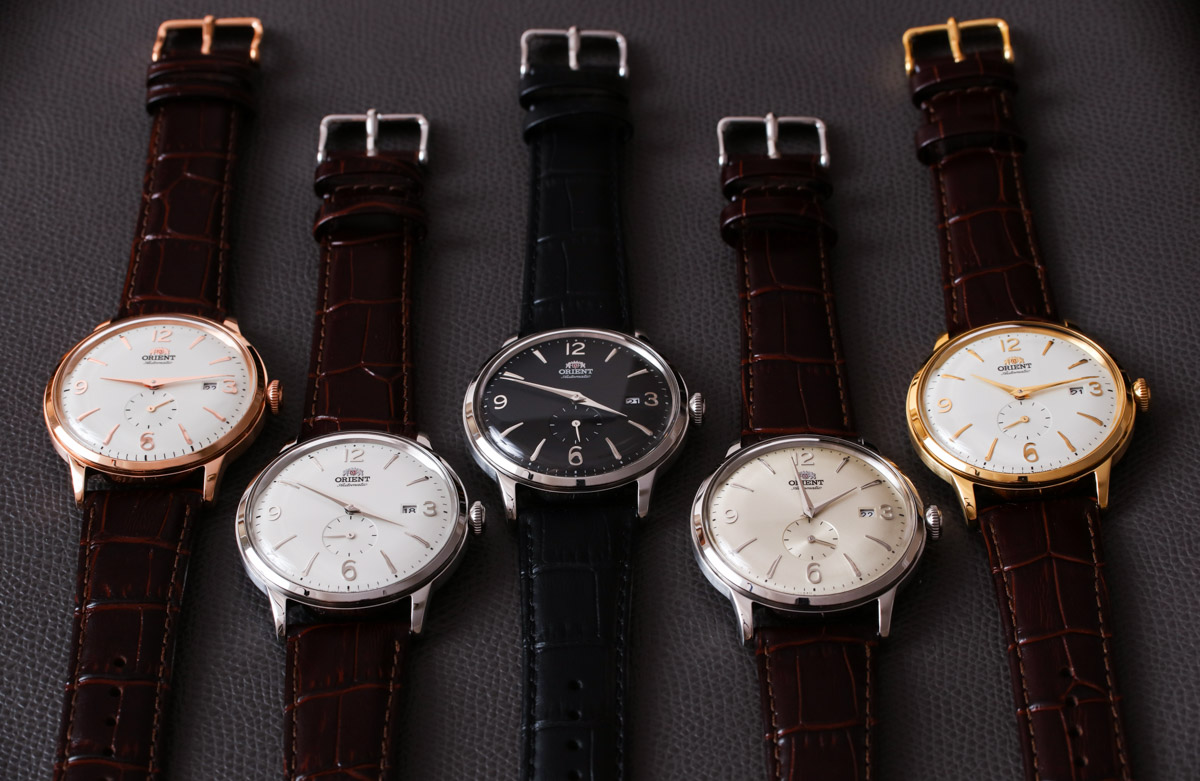 From a design perspective the Orient Bambino was always supposed to be a rather sober-looking dress watch. Nothing has changed in that department. Each of the models still have a vintage-style formal watch design, with an emphasis on asserting a very traditional design versus something modern or contemporary. With vintage-style watches being so in – especially in the context of dress watches, the look of these Orient Bambino watches is going to impress and satisfy a lot of customers out there. More so, I think the upgrades in the Orient Bambino SS are significant enough for existing Bambino customers to really consider upgrading. More practical is simply being able to get a new Bambino in a color scheme that you don’t already have.

Let’s jump straight to the topic of the movement inside of the case. Most previous Bambino watches had rather primitive automatic movements that didn’t have a hacking seconds feature or even allow for hand-winding of the mainspring. A few years ago Orient changed all that with the release of the in-house made caliber F6724 automatic – which finally offers a modern movement for Orient timepieces. It was not until now that one of these newer movements showed up in a Bambino collection product that I’ve reviewed. Inside the Bambino SS is a variant of the F6724 which is the new caliber F6222. This automatic movement includes a subsidiary seconds dial over 6 o’clock – making for a really classy look which I think lends itself well to any dress watch design. The F6222 automatic finally offers both automatic and manual winding, as well as a hacking seconds feature (the seconds hand stops when you pull out the crown). The made-in-Japan movement operates at frequency of 21,600 bph (3Hz) with a power reserve of approximately two days. It also includes the date. 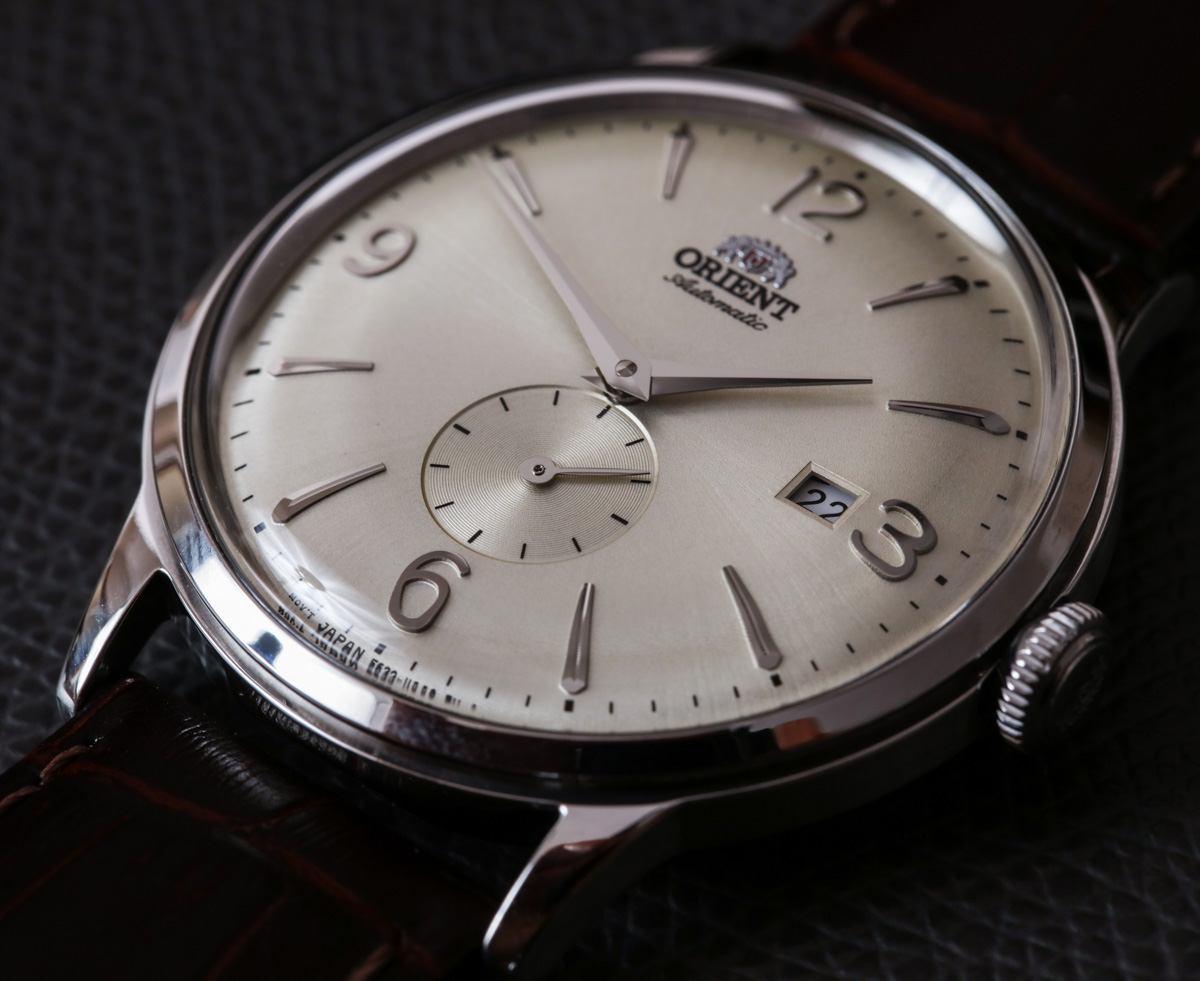 You can view the movement through the rear of the case – which is a nice feature. No, the movement doesn’t have fancy decoration on it, but for that you’ll have to spend many thousands of dollars more. This is about value for the money. Let me also add, that for the money, I’ve seen worse looking movements than the decent (in an industrial sort of way) caliber F6222 in watches even more expensive than this. Orient even goes so far as to put a pretty image on the automatic rotor. In all, for the roughly $300 price, I think the movement in the Orient Bambino SS is totally acceptable. 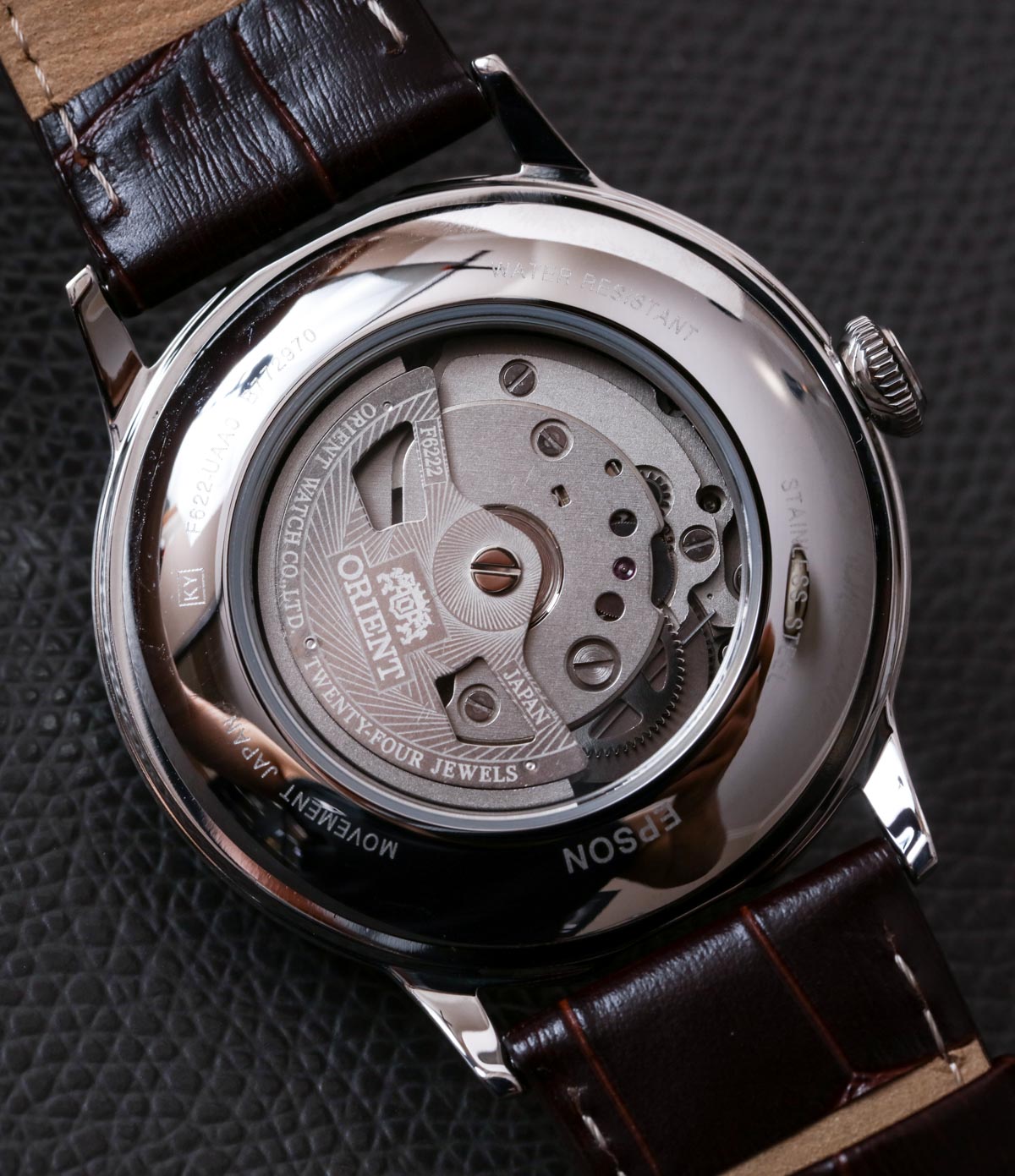 It feels to me as though Orient really upped its game on the case finishing. While most of the Bambino case is polished, the side flanks are brushed, giving the watch a very authentic high-end look. You even have an Orient logo in the crown, which most Seiko watches don’t even offer at this price point. I’ve worn my fair share of Bambino watches in the past, and I still find it awkward (although in a good way) that you can manually wind the movement via the crown. It feels almost as though the Bambino is finally all grown up.