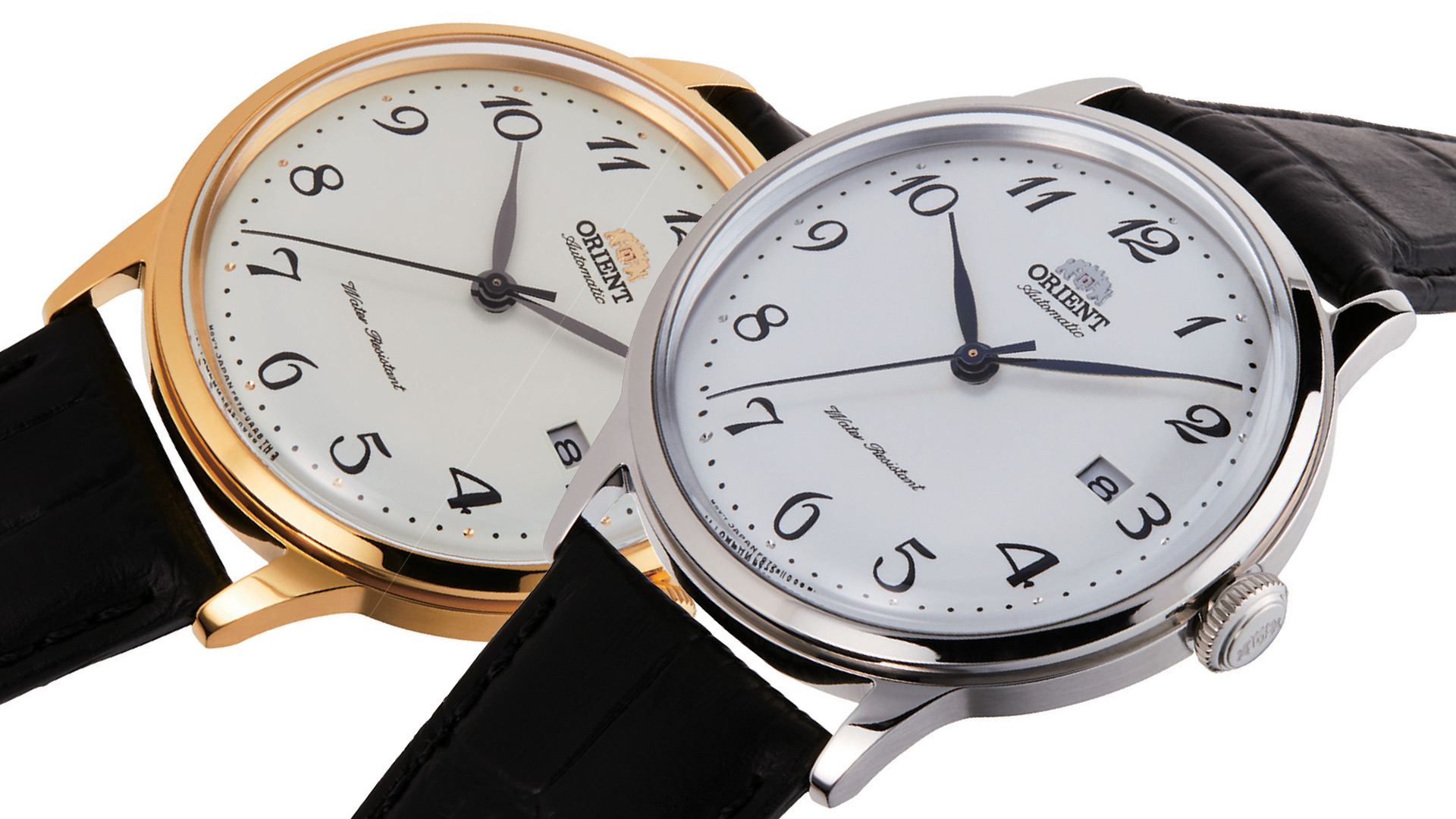 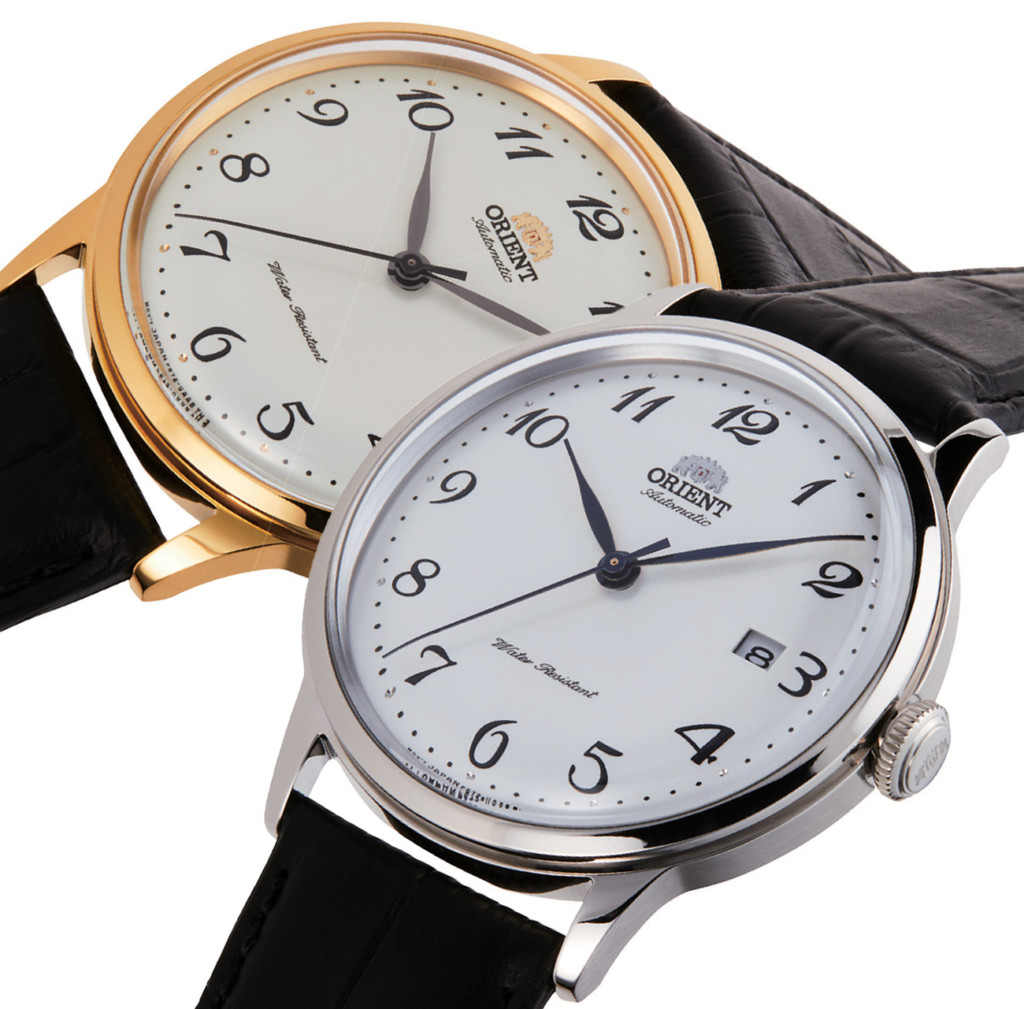 I don’t think it’s a secret that aBlogtoWatch as a whole finds Orient to offer some of the best values out there for an entry-level mechanical timepiece. My first mechanical watch was an Orient Mako “Tumor” Dive watch, and it was my daily beater for the better half of a decade. My second Orient? A Bambino Gen II that still holds a special place in my collection. We’ve come a long way since then, and last week Orient released three new iterations of the Orient Bambino Version 5, or “V5” – and I think it’s my new favorite Bambino. 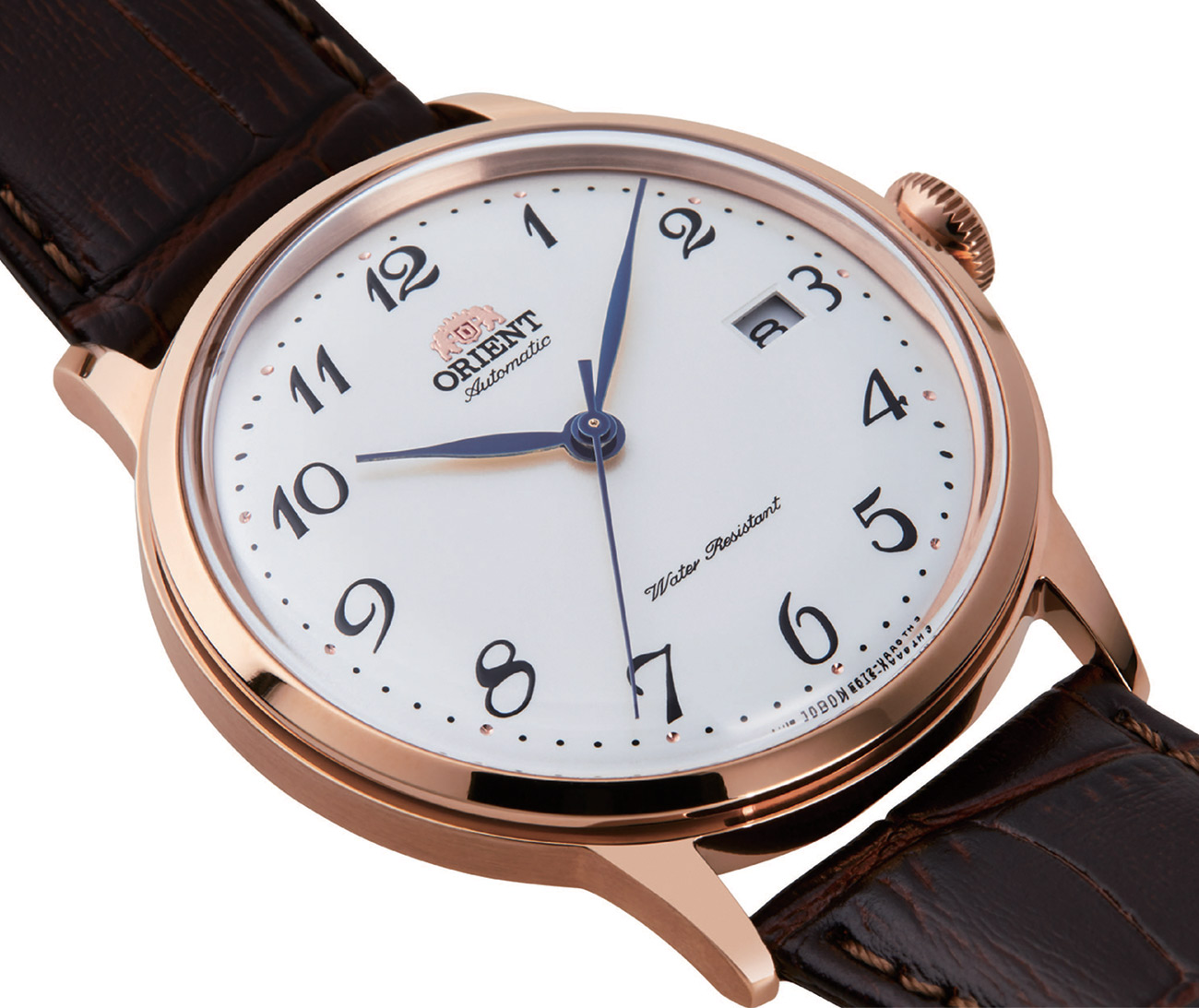 Like previous Orient Bambinos, the case measures 40.5mm wide by 12mm thick, making it an ideal size for a modern dress watch – if a bit on the thick side. The new polished cases will come in stainless steel, or “silver” as termed by Orient in the press release, as well as rose gold and yellow gold (coated, of course). Honestly, and rare as it typically is for me, I find the rose gold model the most attractive. The crown is still small and slightly onion-shaped, making it easy to pull and not intrusive. The case features a domed mineral crystal and a polished finish that looks nice against the matte brush of the case sides. I feel the narrowness of the lugs appeals to my preference for giving dress watches as minimal a footprint as possible. The Orient Bambino Version 5 carries a water resistance of 30m. 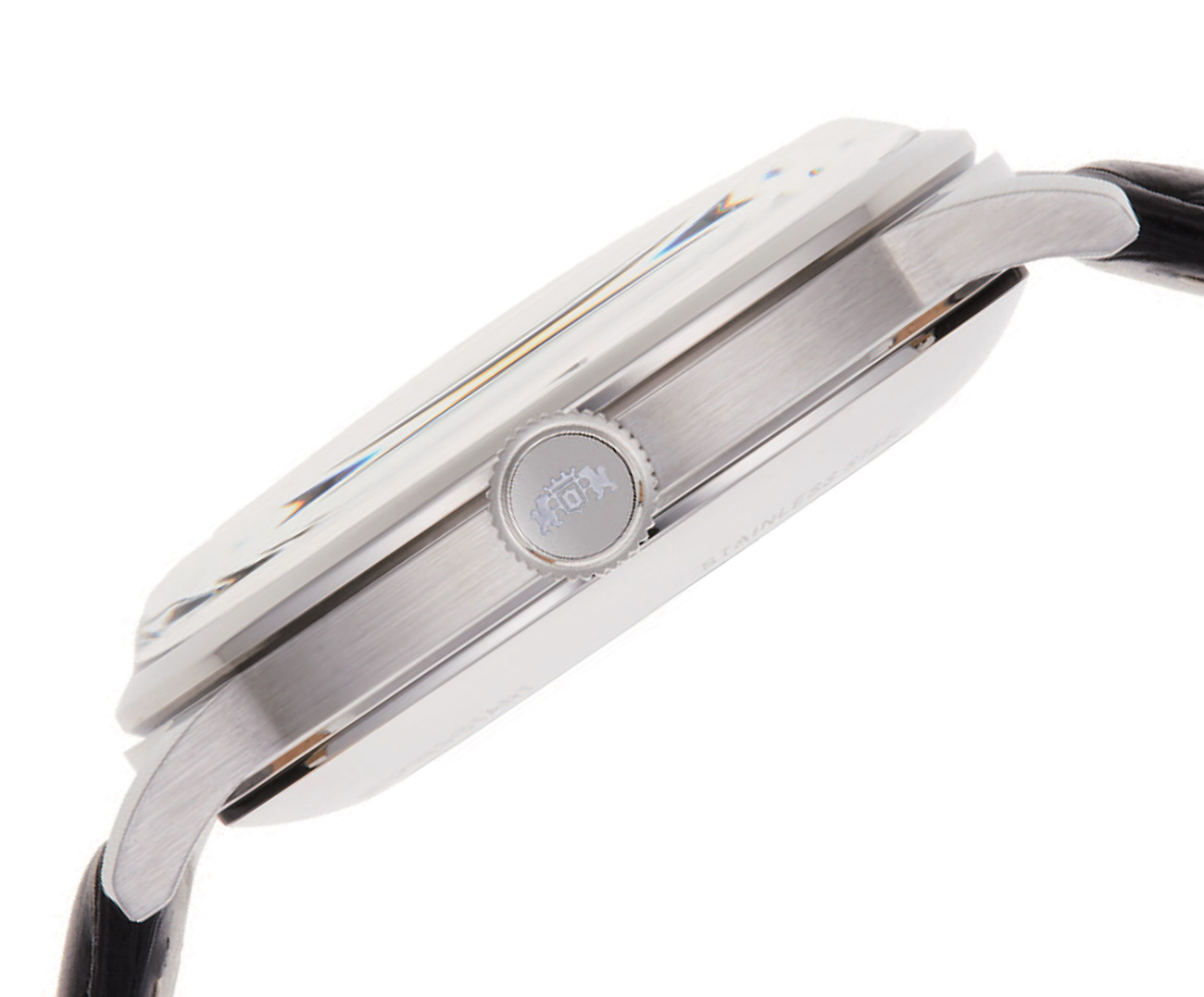 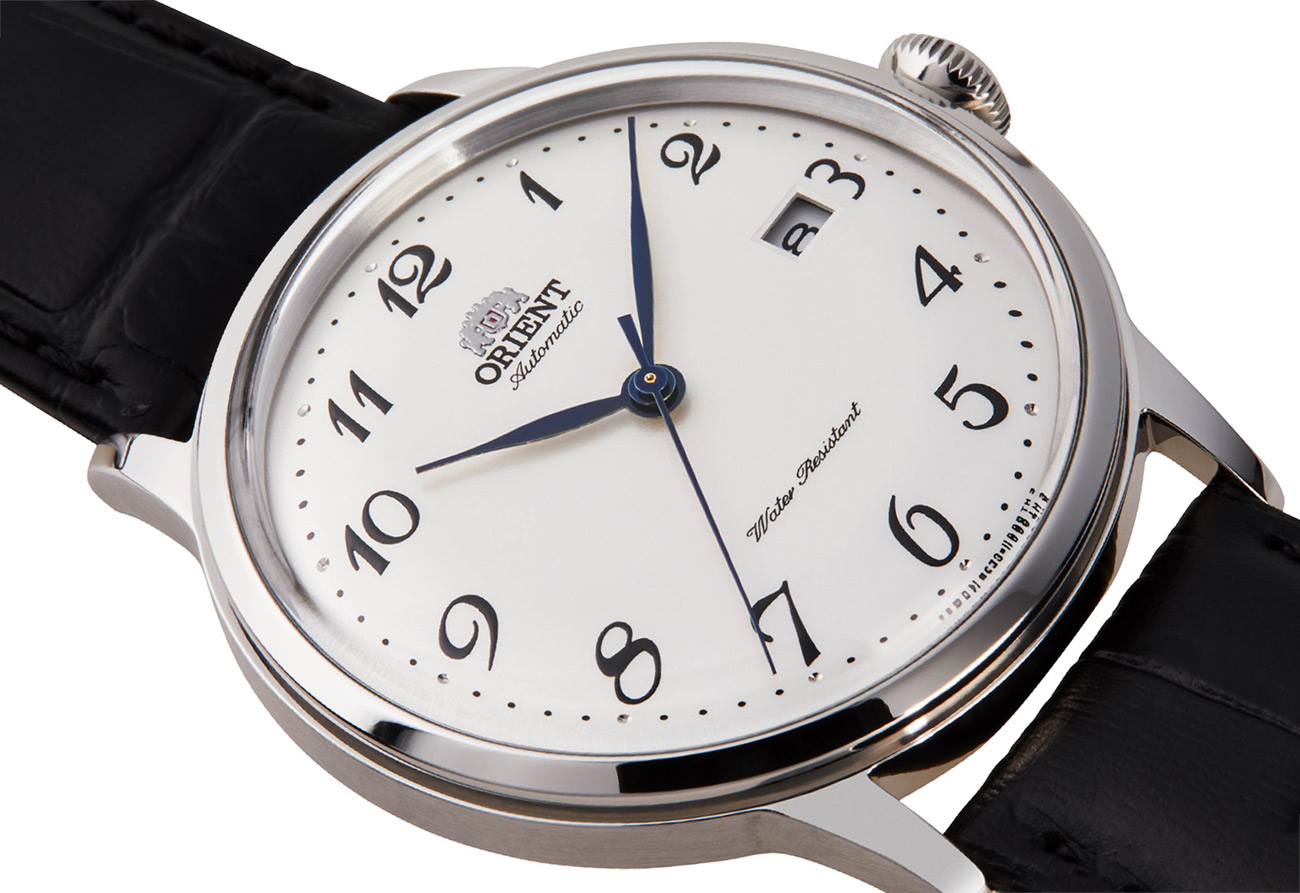 The dial, however, is what received the biggest update. Historically, the Orient Bambino collections and previous generations of the watch have featured simple indices, Arabic numerals, Roman numerals, or a combination of these things. Some have looked utilitarian and Bauhaus-y, and others have looked like rather busy – some with small seconds sub-dials as reviewed here, some without. Likewise, the handsets have varied from sword to baton style to match the rest of the design. Personally, I’ve found many versions of the Bambino to be a little “too much” while others are “not enough,” though the collection is sufficiently large enough to find one or more that I like. And there’s probably a little something for everyone, as Orient casts an intentionally wide net. 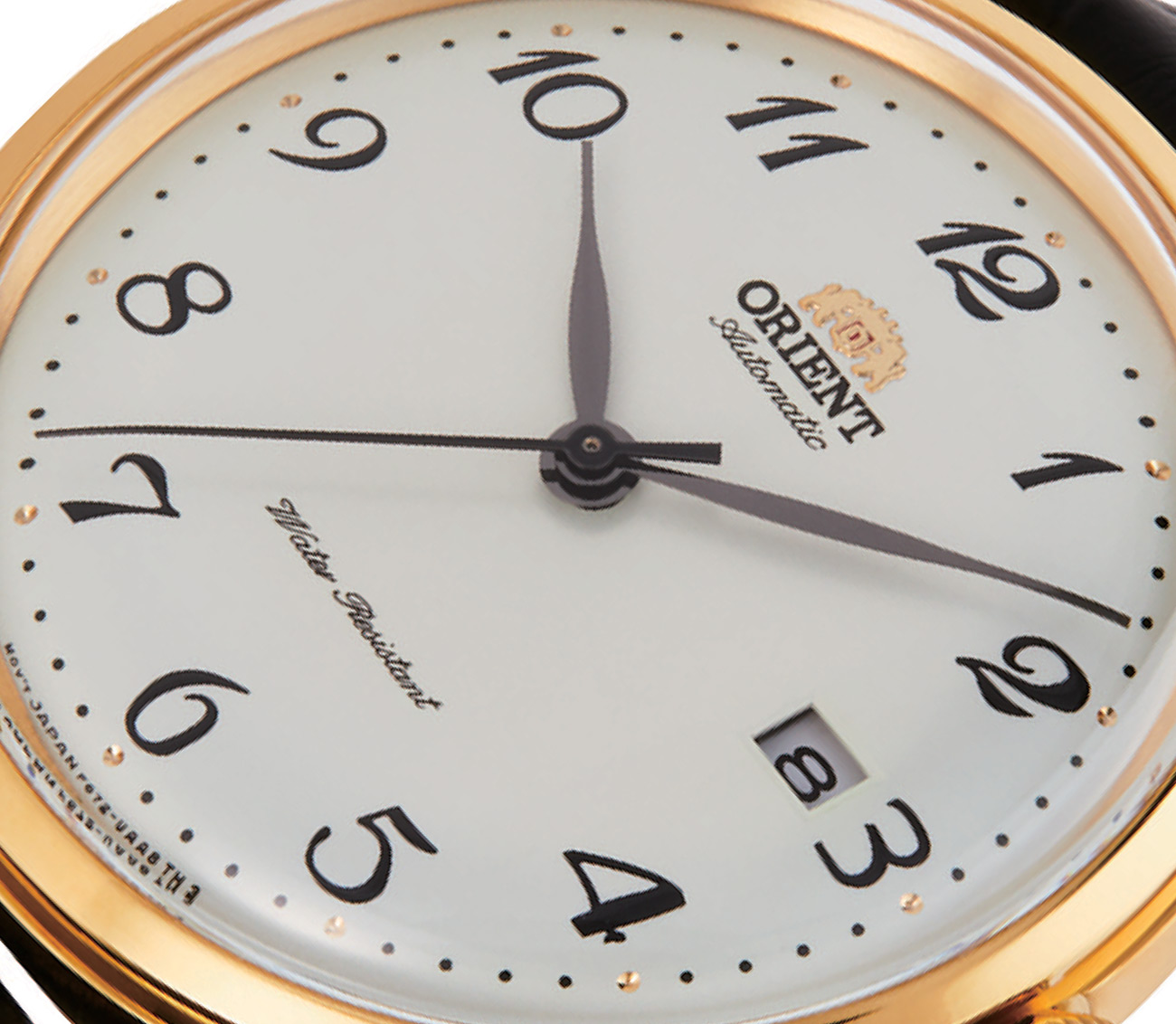 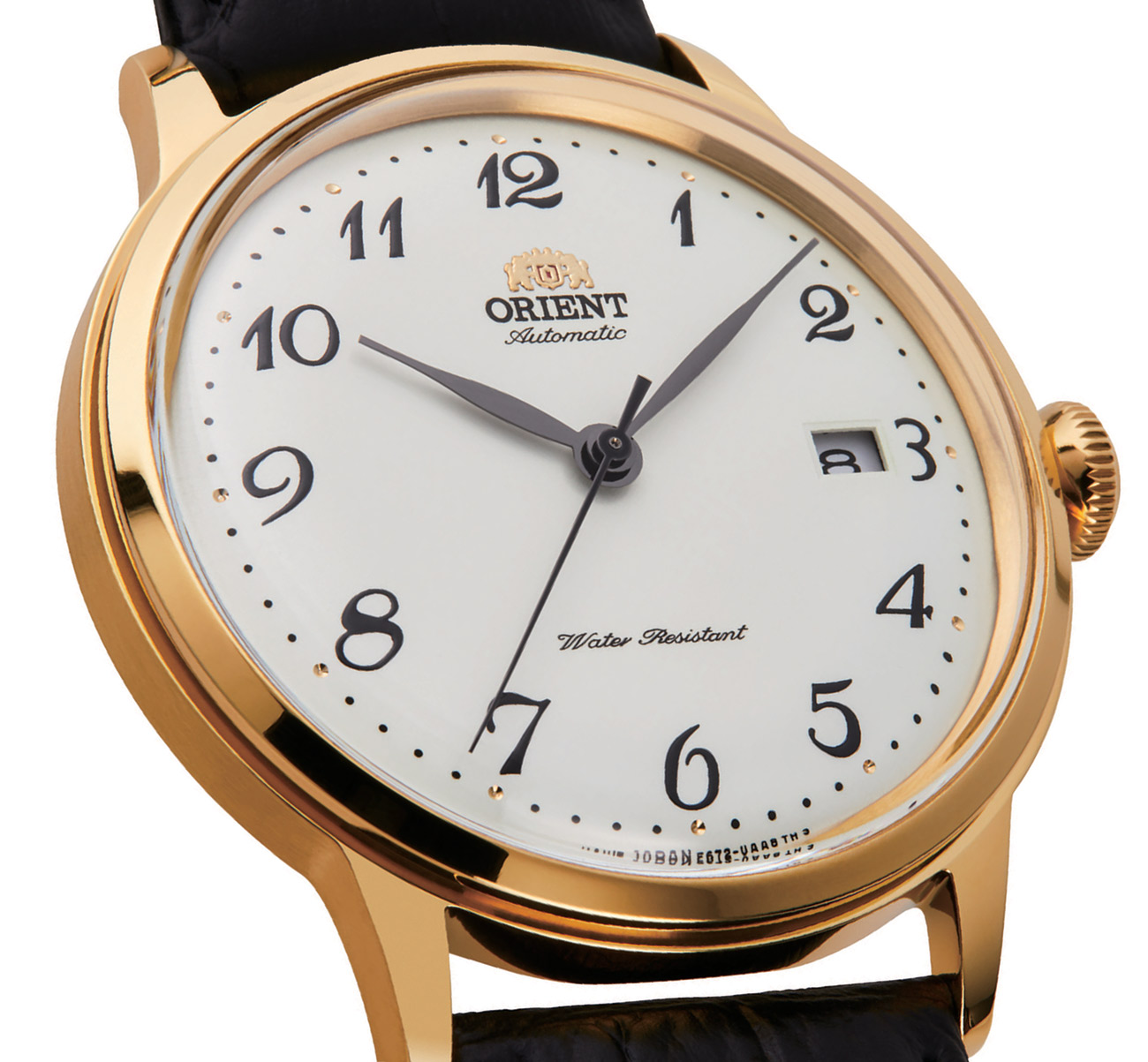 The Orient Bambino Gen 5 continues to mix it up, being the first model that sports leaf-shaped hands and printed Arabic numerals. The slightly domed dial itself is a milky white, giving it an almost enamel feel. Around the outer edge of the dial are dotted seconds indicators, a classy and welcome departure from the lined indicators typical of the collection. Each hour marker features a pip matched to the case color. The most notable change is the printed hour indicators, and it is hands-down my favorite part of the watch. They bring a classy tweak to an otherwise basic design, and I can’t help but think of the old-style Breguets. A small date aperture sits at 3 o’clock leaving the index undisturbed (a rare occurrence), and text on the dial is minimal – though I still have the small gripe that the Orient logo is so large. Overall, the dial looks classic and well done, and that can be hard to achieve in the saturated minimalist dress watch market. 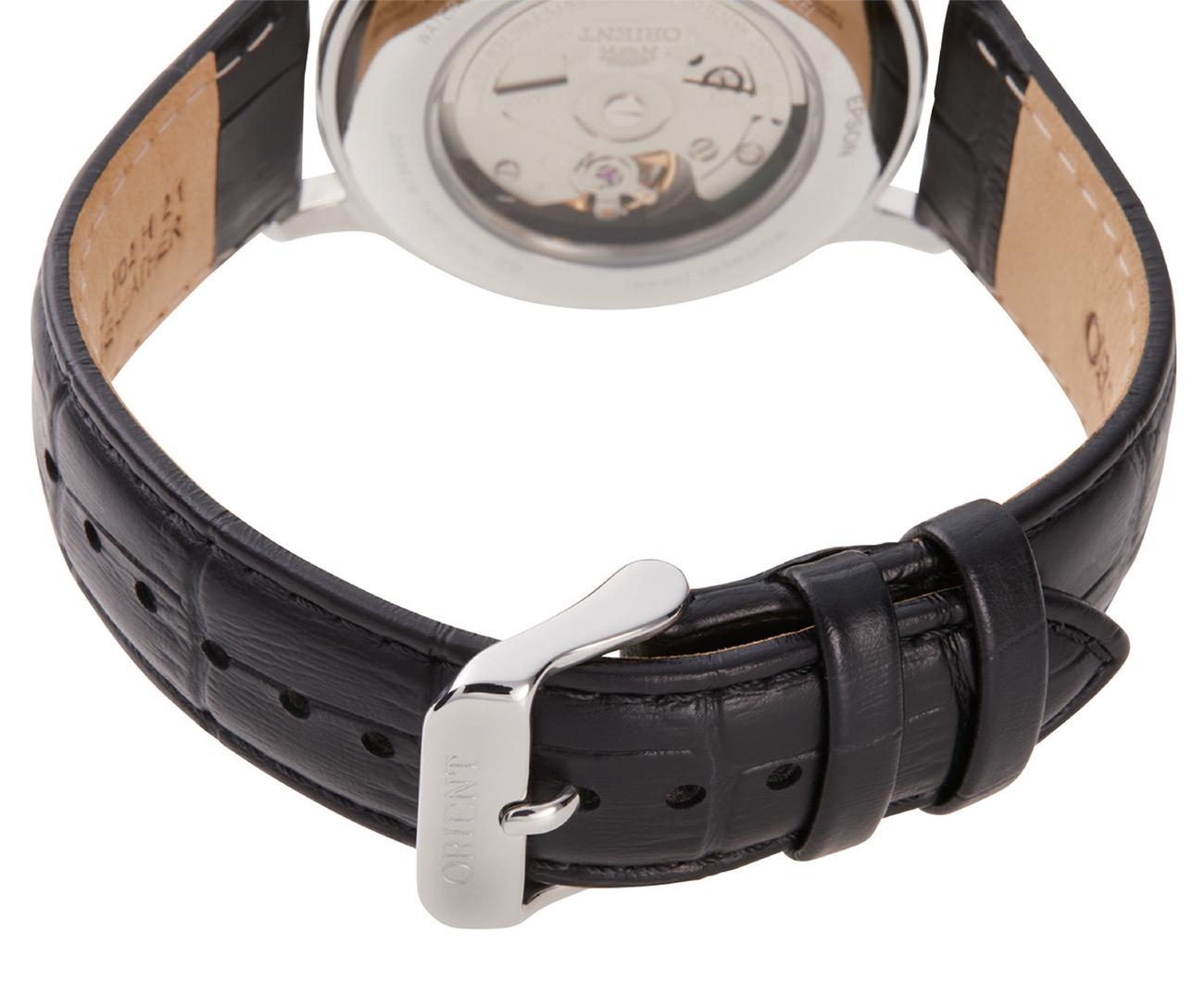 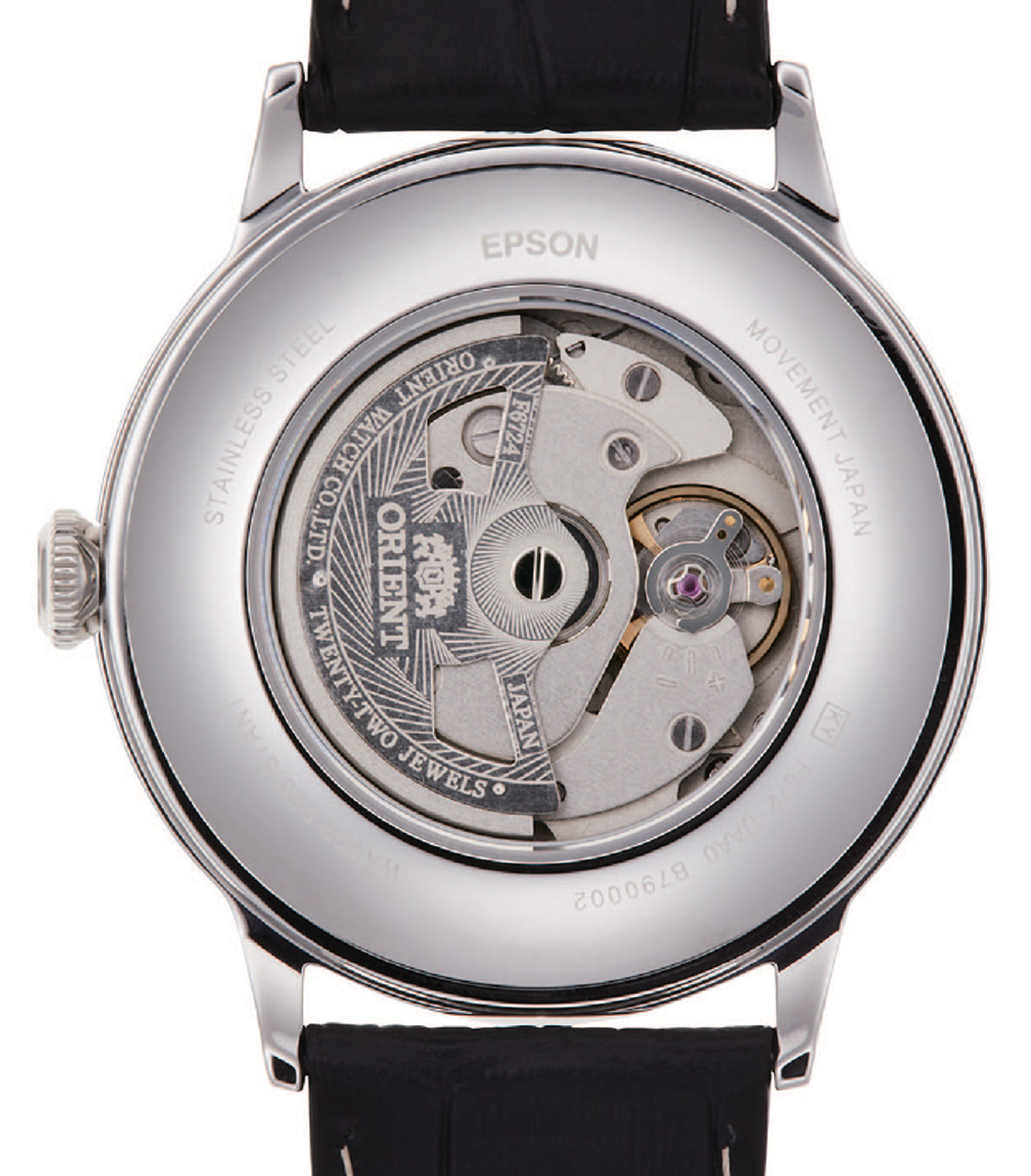 Flipping the watch over, you’ll see a polished exhibition caseback displaying the Orient Cal. F6724 automatic movement. This is one of Orient’s more popular movements as you get a lot with it considering the price tag. The hand-winding movement features hacking seconds and a 40-hour power reserve. Finishing is basic, with an etched rotor, but it’s hard to expect more at this price point. Tying the watch together is a black alligator leather strap for the steel and yellow gold watches, and a brown leather strap on the rose gold model. 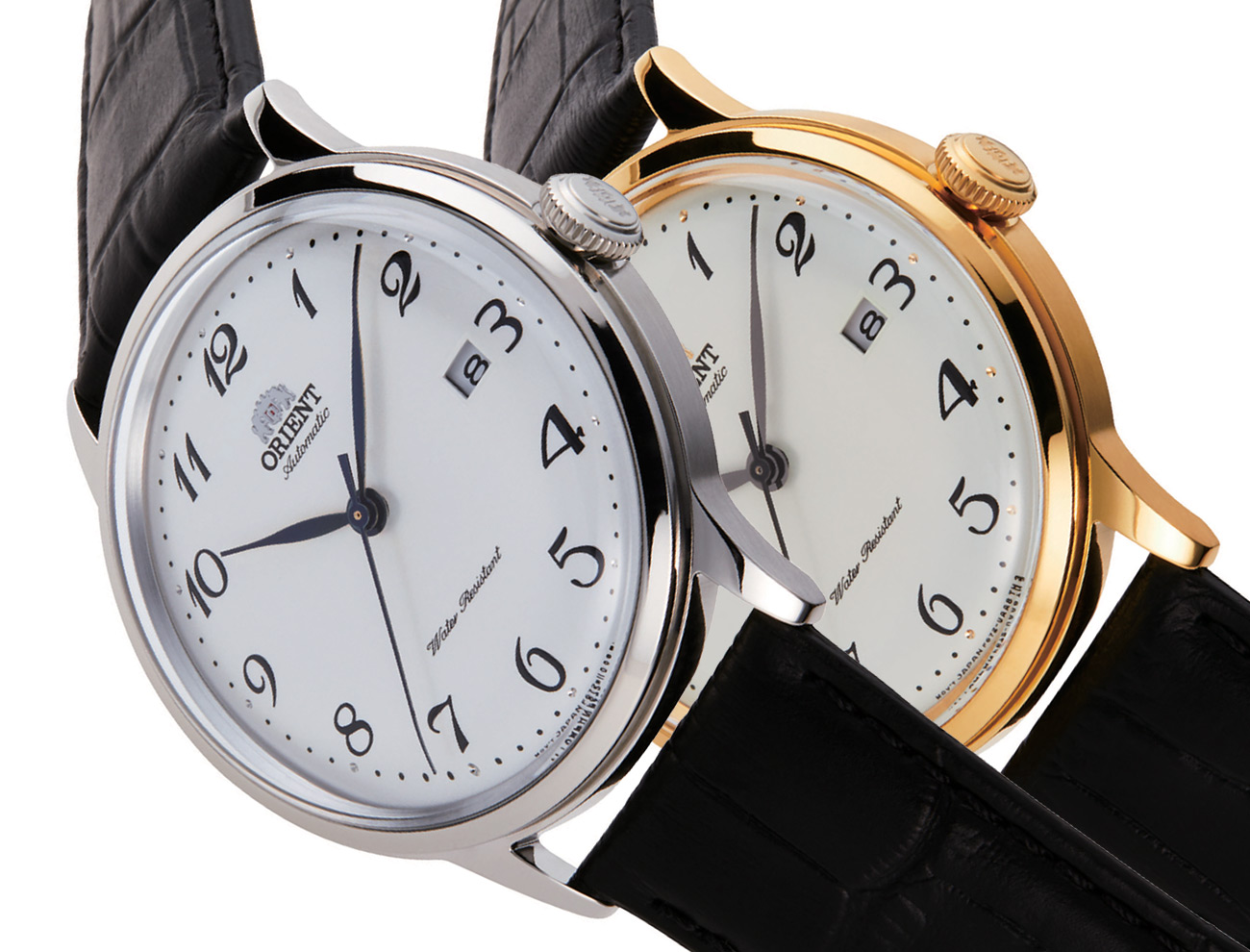 These are probably my favorite Orient Bambinos yet. In fact, I find them to be among Orient’s most attractive offerings overall. At the price range Orient is competing in, it’s hard to find many other options that match the Orient Bambino’s value, as we noted in our popular article on Orient dress watches. It’s not easy to escape the everything-is-different-but-everything-is-still-similar state of the affordable dress watch market. It seems that every new Kickstarter dress watch is “disrupting the industry” and yet rarely amounts to more than a mediocre design of questionable build quality with a high asking price. At least, that’s often the case. With the Orient Bambino Version 5, there isn’t a frou-frou marketing campaign behind it, and you get what you pay for – a solid automatic movement, from a solid brand, in a solid design, and that’s a hard offer to beat. Price for the Orient Bambino Version 5 is $155 in steel, $175 in yellow gold, and $185 in rose gold. Learn more at orientwatchusa.com