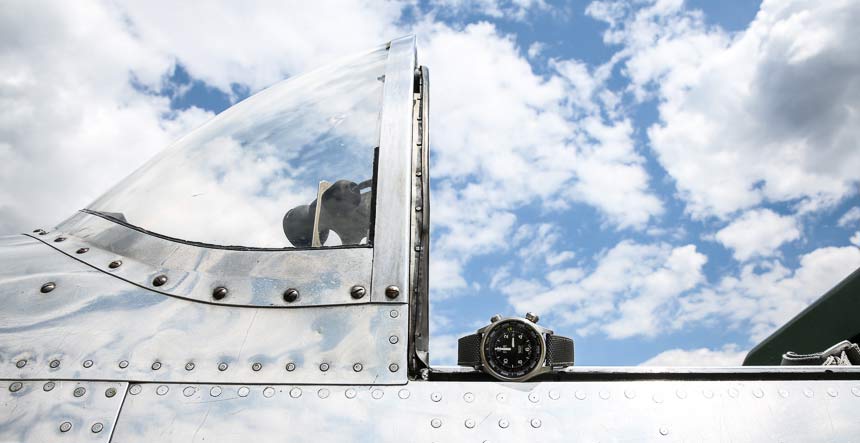 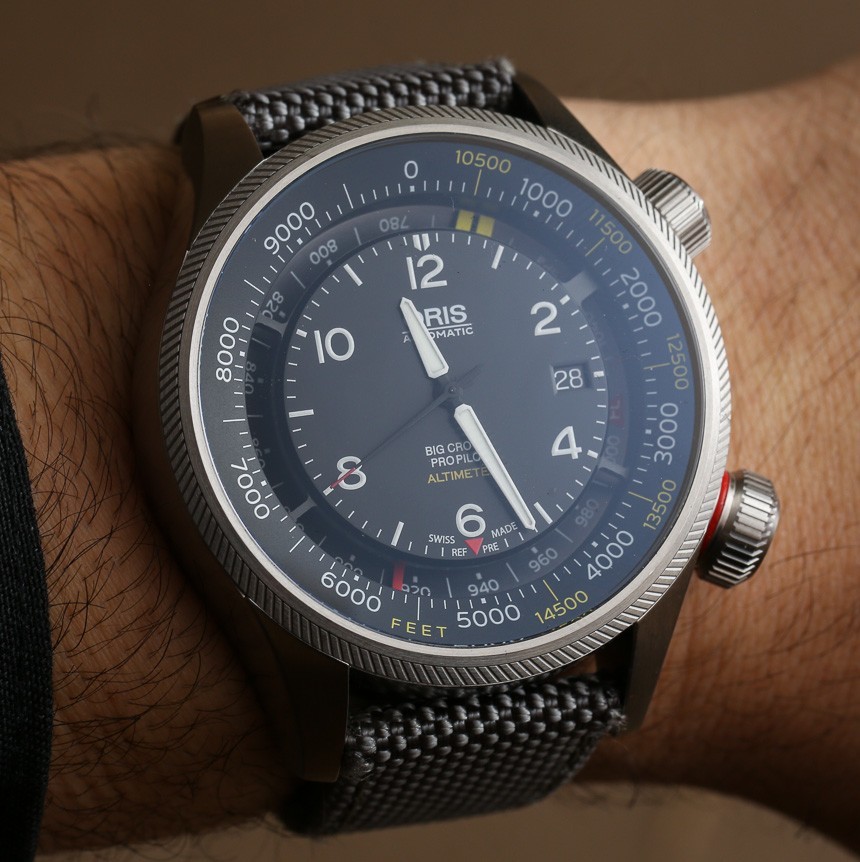 For 2014, Oris has released a new timepiece which is the world’s first automatic mechanical watch with an altimeter. Called the Oris Big Crown ProPilot Alitmeter, the piece continues the brand’s notion of attempting to include useful complications in its watches for racing, diving, and of course aviation. In a sense, the Oris Big Crown ProPilot Altimeter watch is a follow-up model to the 2013 Oris Aquis Depth Gauge watch with a simple yet highly effective depth gauge used for diving.

Oris did not announce the Big Crown ProPilot Altimeter watch at Baselworld 2014, but rather waited a few months to debut the timepieces at a special event in Switzerland that aBlogtoWatch was fortunate enough to be a part of. Oris did something rather clever to launch its new pilot watch: they had us go flying in order to see the new Oris Big Crown ProPilot Altimeter watch in action. So this isn’t just a hands-on look at a new watch with a theoretical explanation of how it works. I got to see the watch in action myself. I do feel that more brands should take Oris’ lead in this regard. Yes, it is cool to fly planes, but more importantly, it gives us an opportunity to actually test a function a new watch is meant to offer in the real world. 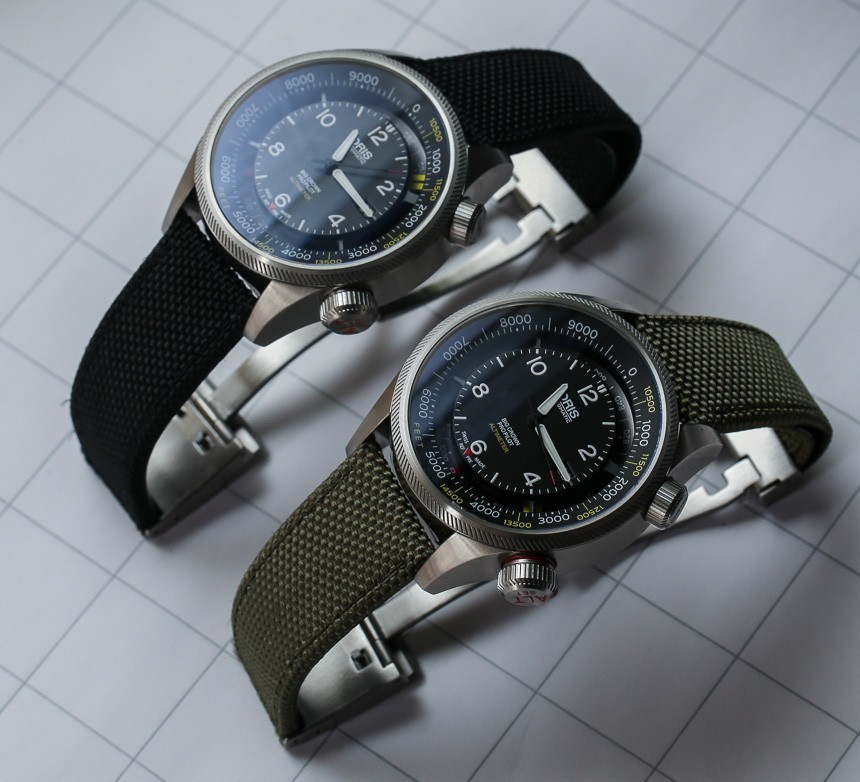 To test the Oris Big Crown ProPilot Altimeter watch I traveled to the Ambri airport in Switzerland near the Italian border. Ambri is the home of a small airport, where Oris participates in their own little flying academy. We got to fly some prop planes as well as vintage military jets, and what a difference it made in seeing a mechanical barometer watch work in real time. 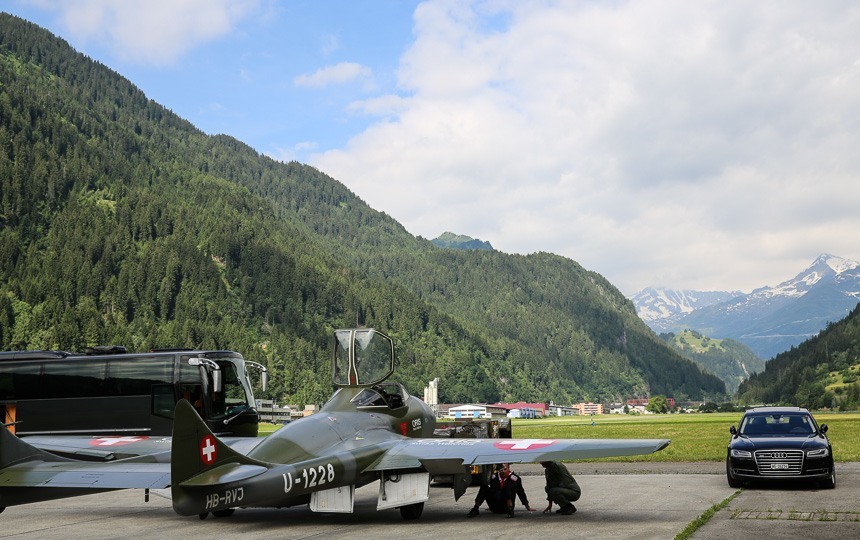 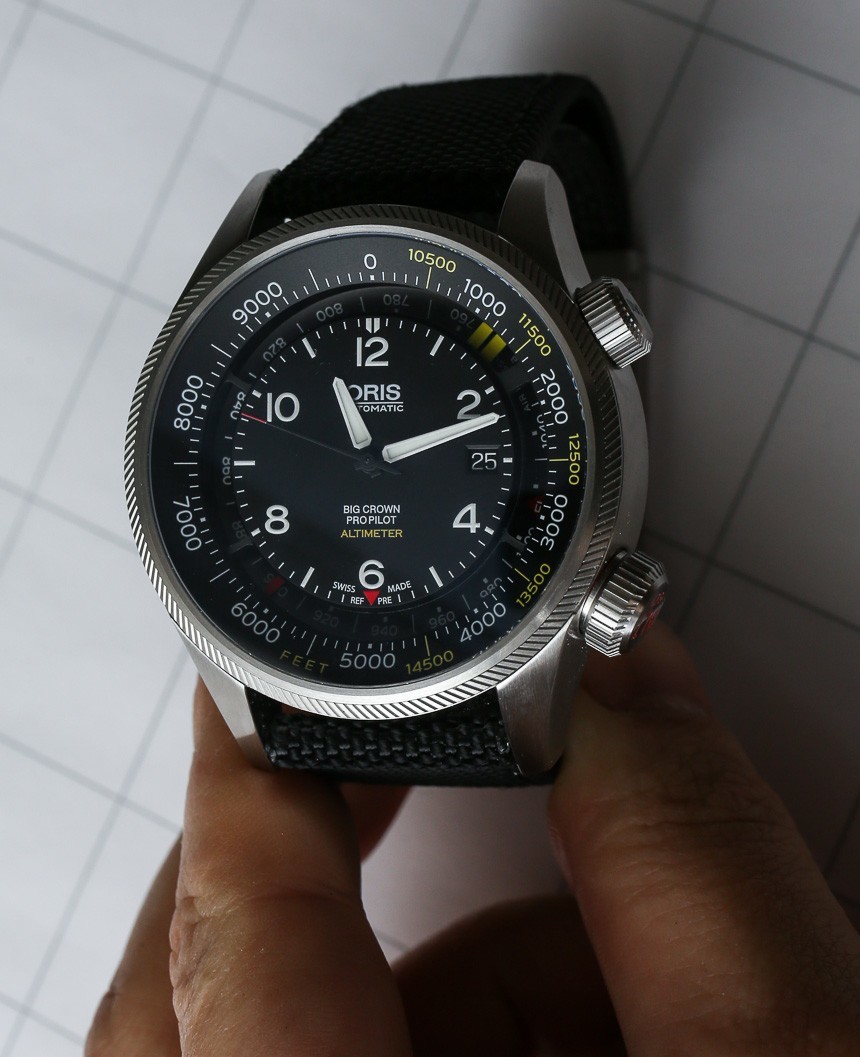 Oris was smart to invite a range of people in addition to some of the usual watch writer suspects to test out the new Oris Big Crown ProPilot Altimeter. Among those people were aviation journalists and other specialized or lifestyle media. The Oris Big Crown ProPilot Alitemeter watch is no doubt cool, but the question is whether or not there is a demand for it outside of the watch industry. Of course, most pilots have a number of redundant instruments for important information such as their altitude. Will they scramble to buy a new mechanical altimeter watch? Or is this just a cool piece of watch gear that some collectors and hobbyists will find appealing?

These are all good questions, and knowing the typically sober nature of most pilots, I feel that some aviators, but mostly a lot of watch people, are going to be drawn to the ProPilot Altimeter piece. I mean when it comes down to it, pilots tend to sink most of their disposable income into their planes above all else. Oris actually has a legitimate argument that the watch isn’t just for pilots, but also for adventurers, hikers, skiers, or others who want to know their altitude. 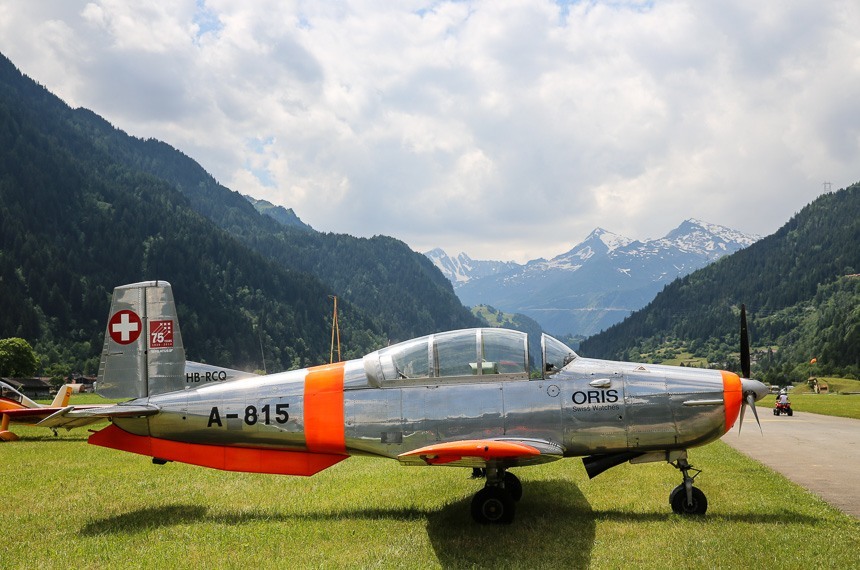 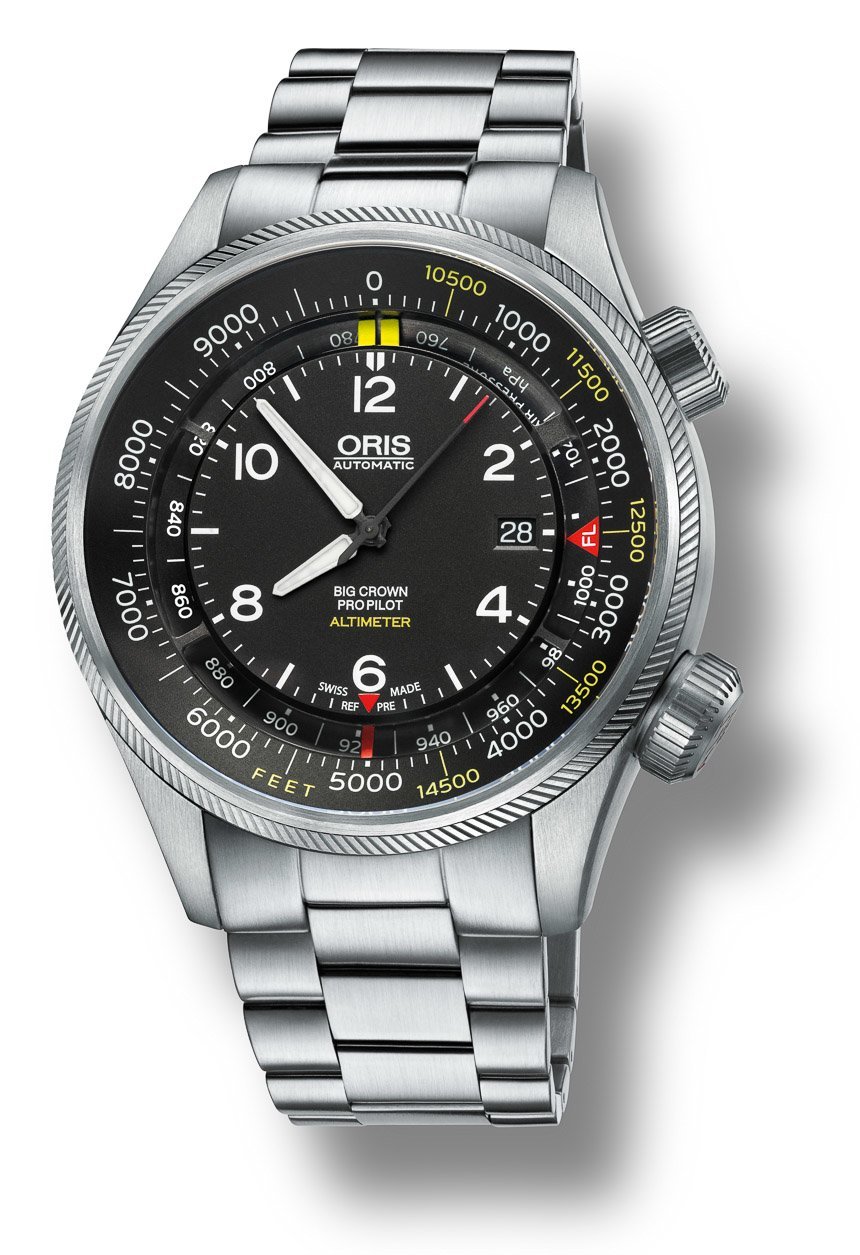 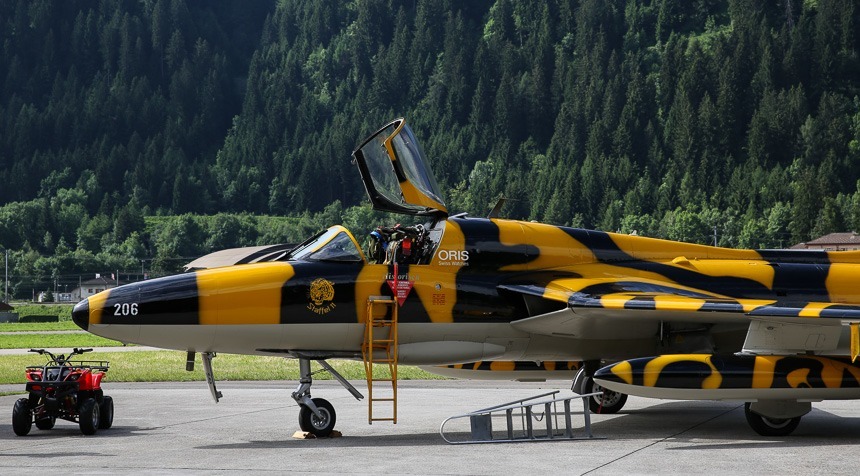 Up in the air testing the Oris Big Crown ProPilot Altimeter watch, I wanted to compare it with the digital altimeter in my Casio G-Shock Rangeman (reviewed here). In many instances mechanical watch brands release things which are supposed to be “awesome” but are easily available in a more accurate, and cheaper digital package. So I was interested to see how Oris – a reliably good “tool watch” brand – fared against a digital altimeter watch.

The result was interesting, actually. While the Casio was a bit more precise in the measurement, they were both more or less accurate in showing the altitude. What was better about the Oris Big Crown ProPilot Altimeter watch was that it was able to show the change in altitude in more or less real time, while the Casio did not update its readings each second (though it isn’t touted as an aviation watch). The down side is that the relatively small size and compact nature of the altitude scale means that it is difficult to read your altitude with precision. 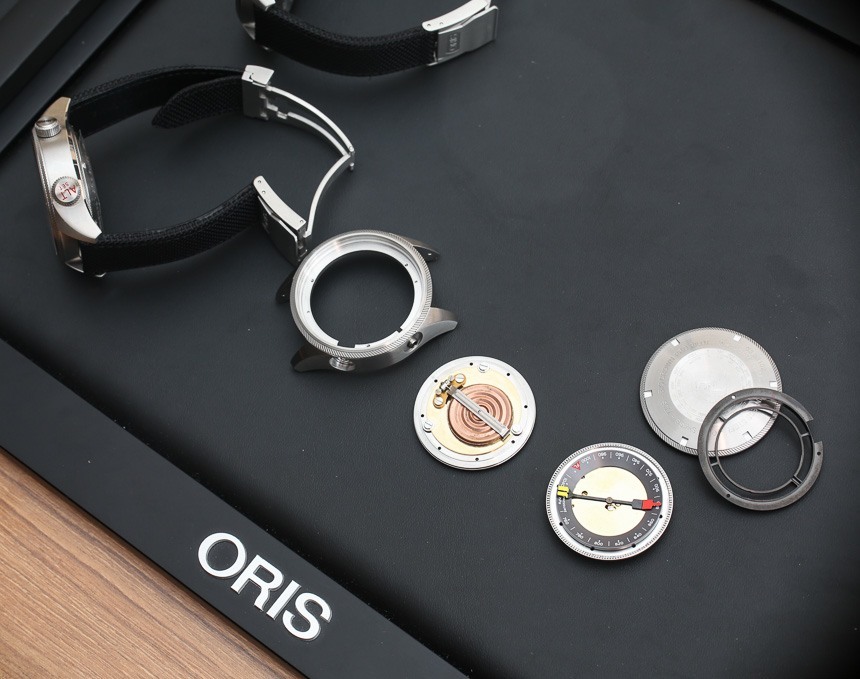 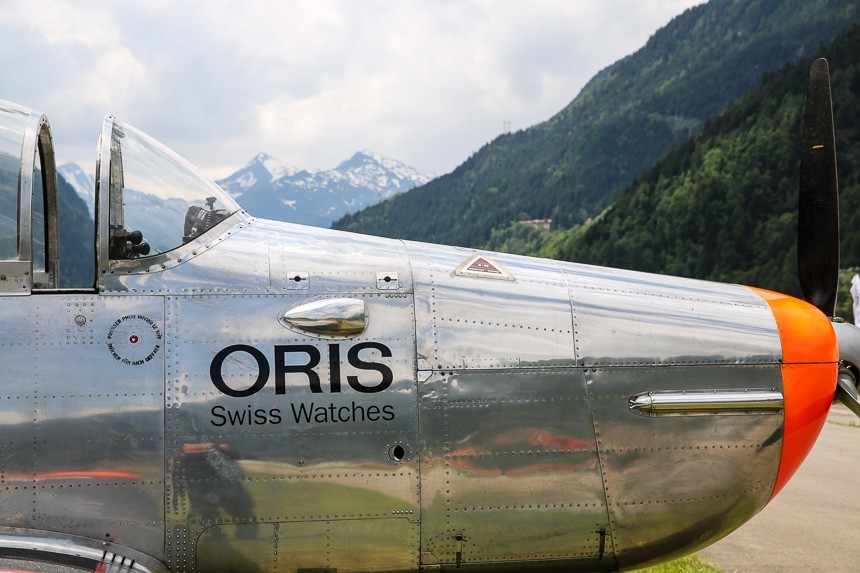 Little else is cooler than wearing an instrument watch and seeing it work in action. Flying in nimble aircraft, we were able to climb and descend over 1000 feet in a matter of seconds and watch the altitude hands move accordingly in real time. This is the really amazing thing about analog instruments and a site few people other than pilots will be able to experience. Even commercial air travelers will not get this experience because what the system in the Oris Big Crown ProPilot Altimeter watch is measuring is air pressure, and airliner cabins are pressurized. 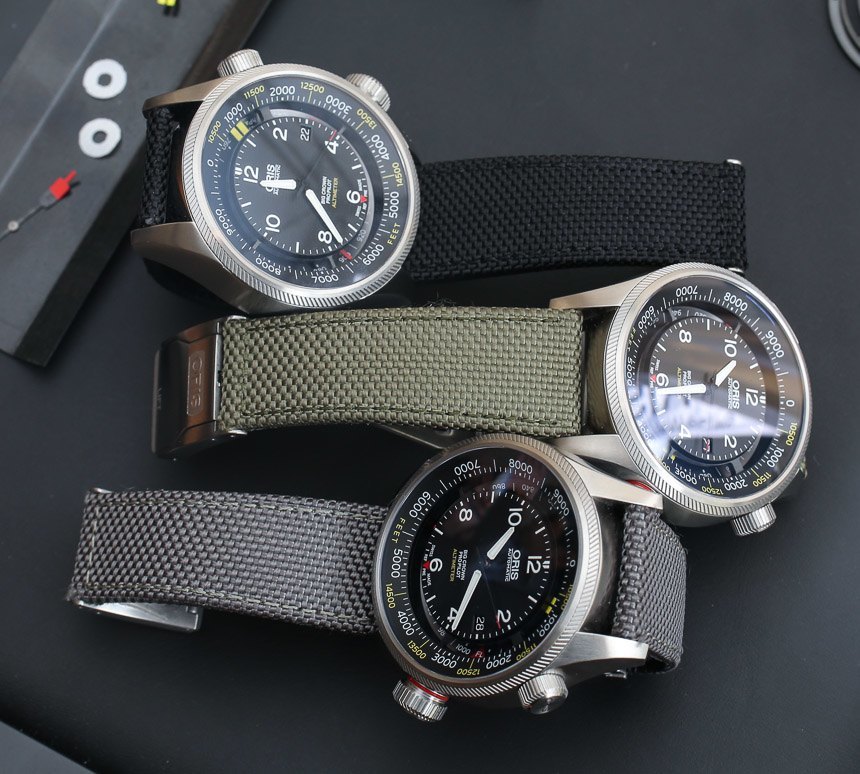 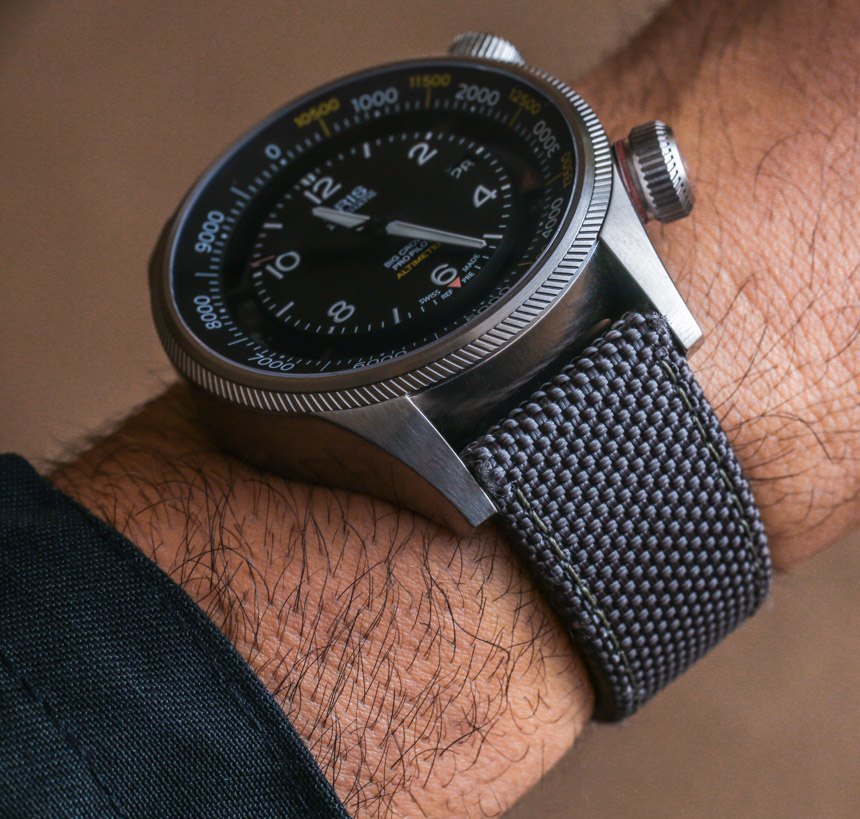 Oris isn’t the only company to release a mechanical altimeter watch this year, they are merely the only one that released an automatic movement-based mechanical altimeter. Breva also released one, with their Genie 02 Altimeter watch (hands-on here). Each of the watches uses an internal aneroid capsule system, which is a technology that goes back to the 19th century. Of course, that is really where these watches stop being similar, as the Breva Genie 02 is priced starting at $132,000. Oris timepieces are considerably more egalitarian in price.

So how does the Oris Big Crown ProPilot Altimeter watch work? It is pretty straight-forward, actually. The timekeeping part of the watch is an Oris caliber 733, which is a base Swiss Sellita SW200 automatic movement which sits in the middle of the case on top of a module. A stem from the movement extends to the crown at 2 o’clock, which allows you to wind or adjust the timekeeping part of the ProPilot Altimeter. 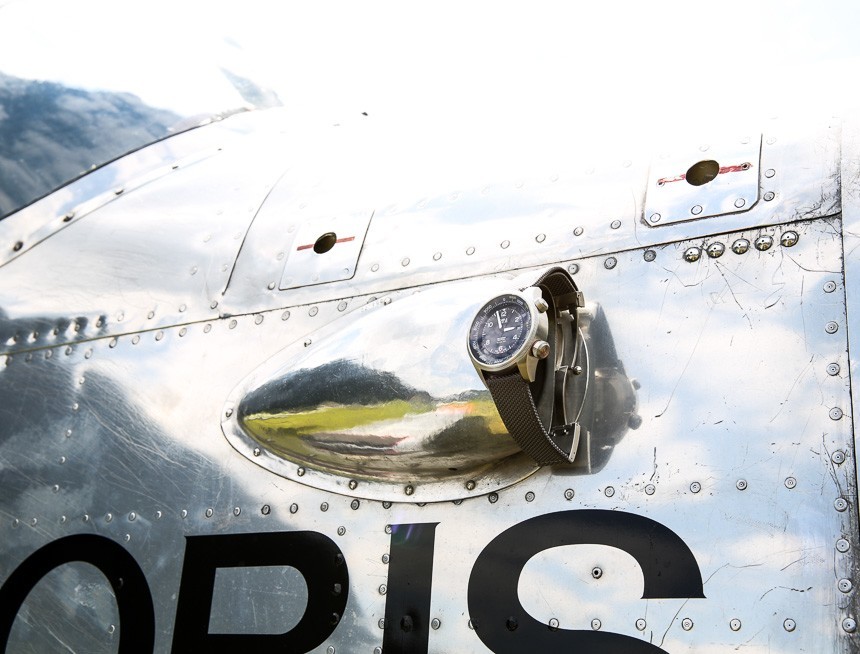 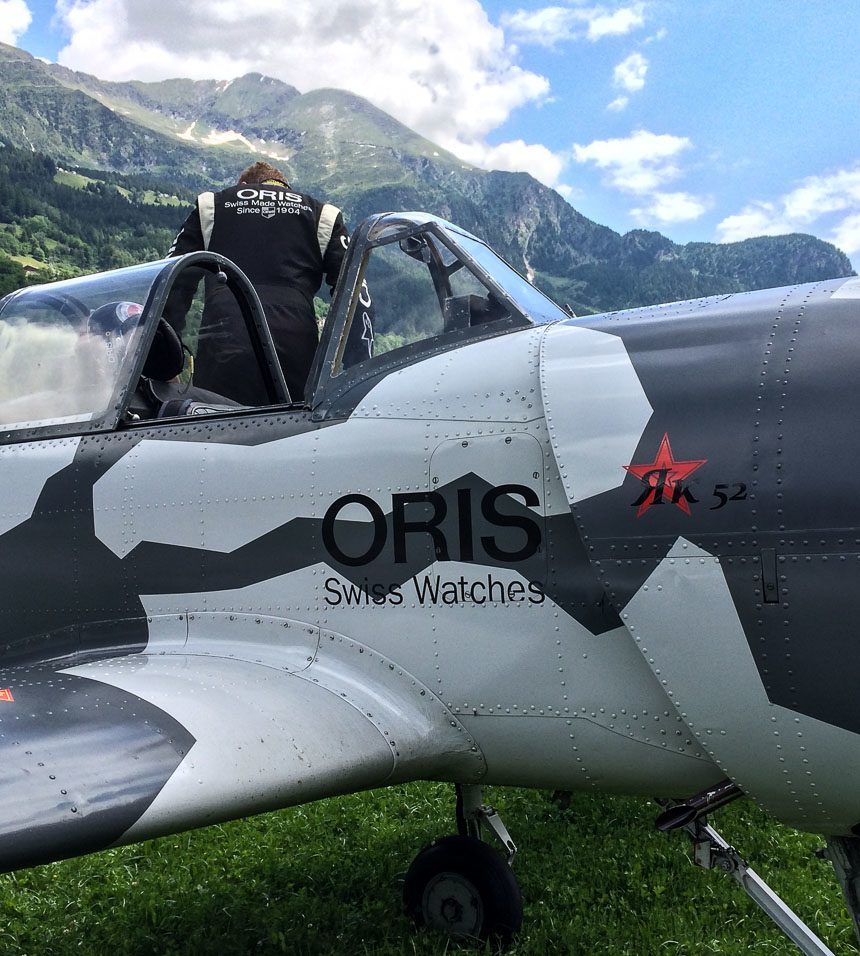 The movement sort of sits in a bowl, surrounded by the altimeter and barometer scale, and resting on top of a space for the aneroid capsule system. The capsule expands and contracts with changes in barometric pressure, and when it does, it moves the altimeter hands. The hand operated by the crown at 4 o’clock can be adjusted to set the base altitude or compensate for environmental matters which can effect the reading. The crown at 4 o’clock is also how you activate the altimeter. Well, activation isn’t the right term, exactly. Basically, for the system to work, air needs to enter the case so that the capsule can sense the pressure. When the crown is screwed down the watch case is water resistant to 100 meters, and when open, it displays a red ring which means air can enter. A membrane prevents moisture and dust from entering the case when the crown is unscrewed.

The outer internal bezel of the Oris Big Crown ProPilot Altimeter watch has a scale for the altitude, while the inner part (which is recessed) uses the rear of the yellow tipped hand to indicate the barometric pressure. Oris will actually make two versions of the watch available, one with a scale for meters and another for an altitude scale in feet. 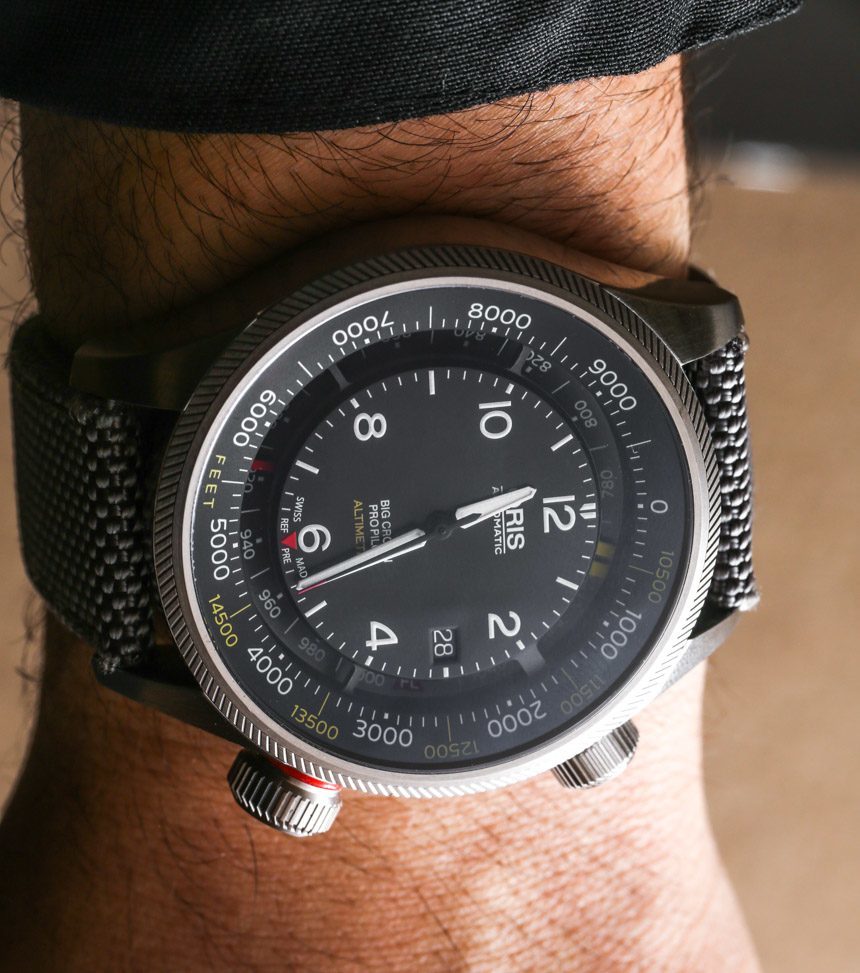