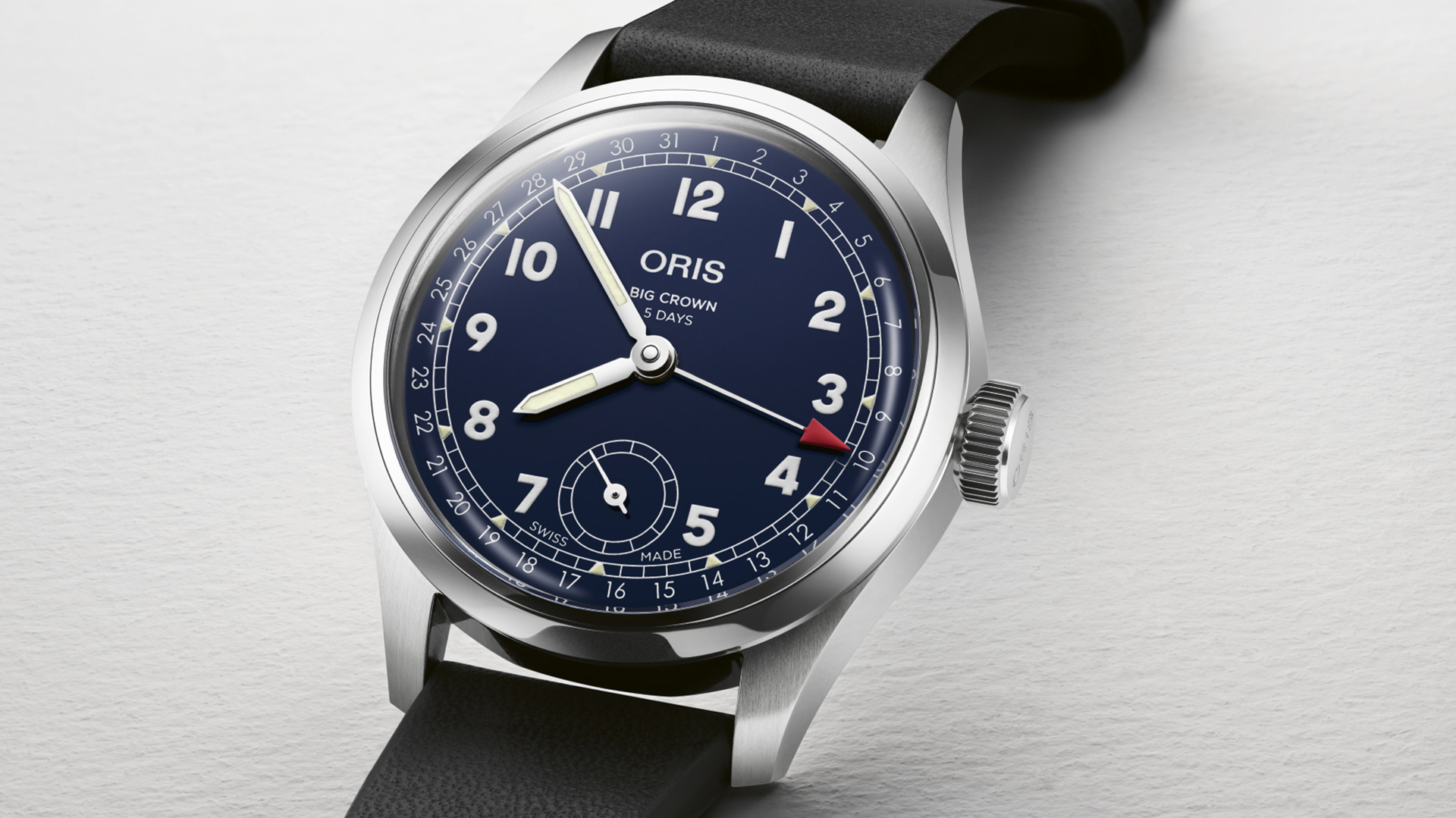 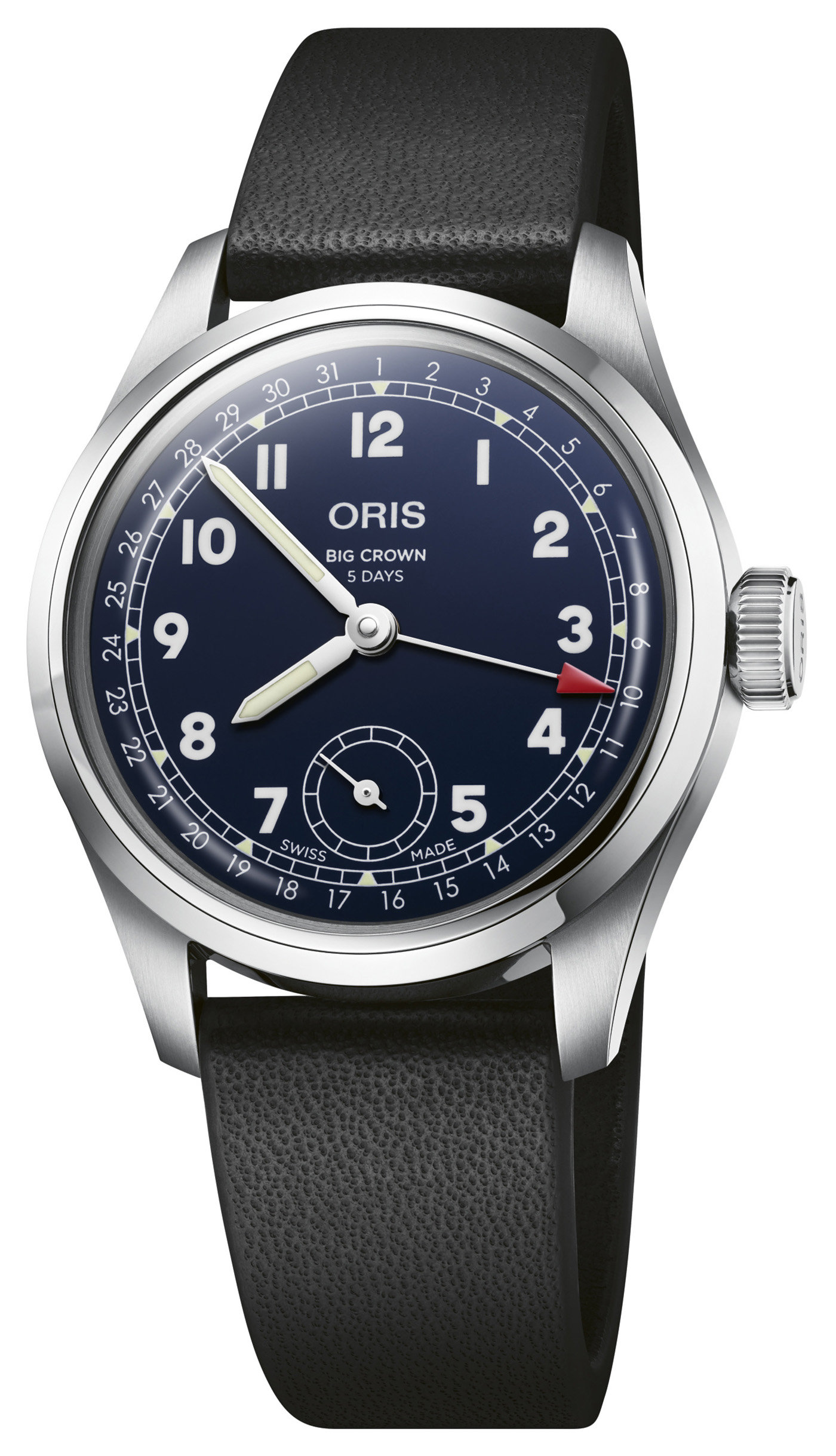 Since its initial debut in 2020, the Oris Calibre 400 family of movements has gradually become the backbone of the brand’s lineup, equipping top-range models across its most popular watch series. While the Calibre 400 and its offshoots have found success with many of Oris’ fan-favorite offerings, until now the independent marque has avoided bringing this in-house powerplant to the Big Crown Pointer Date line. Enter the new Calibre 403 movement, building on the base of the Calibre 400 with Oris’ hallmark pointer date complication. The new Oris Big Crown Pointer Date Calibre 403 goes far beyond simply bringing a new in-house movement to one of Oris’ signature offerings however, with a new design that simultaneously modernizes the look of this long-running watch series and brings it more closely in line with the original Big Crown model from 1938. 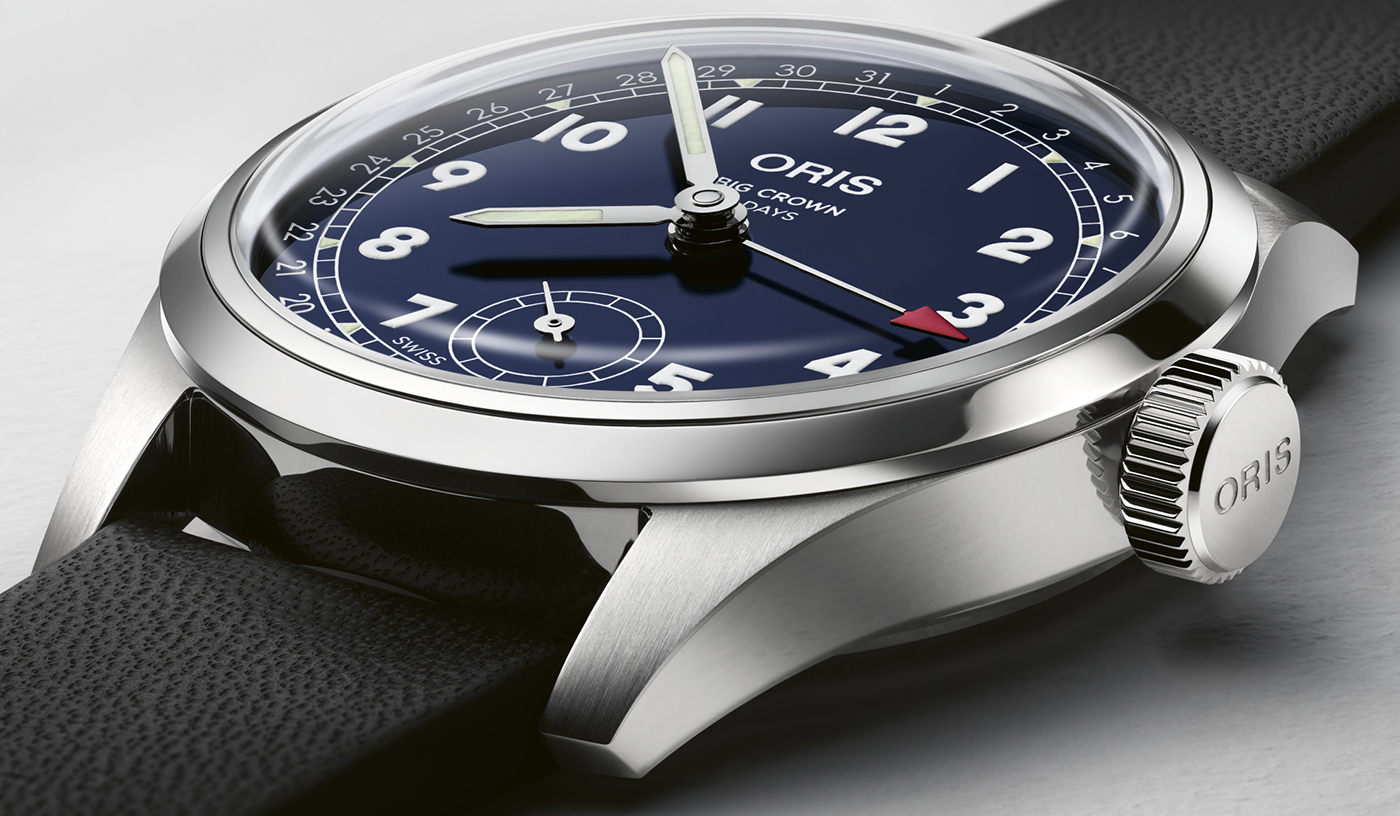 Rather than the familiar 40mm design, the new stainless steel case of the Oris Big Crown Pointer Date Calibre 403 measures in at a clean and compact 38mm-wide. Although the athletic tapering lugs, vertical brushed case sides, and namesake oversized pillbox crown are carried over from the previous generation, this new iteration of the Big Crown Pointer Date removes one of the line’s most recognizable features. The rounded coin-edge bezel that has come to define the look of the series is removed here, replaced by an elemental polished smooth bezel that brings this new vision more in line with the original 1938 Oris Big Crown. While some might argue this new bezel sheds some of the unique personality that sets the Big Crown Pointer Date apart from its rivals, the cleaner execution carries its own charm in images and may help the design connect to a broader audience. Around back, Oris adds a sapphire display caseback to give wearers a clear view of the new in-house movement. This display window does hamper water resistance somewhat, however, as Oris rates the watch for a disappointing 50 meters. 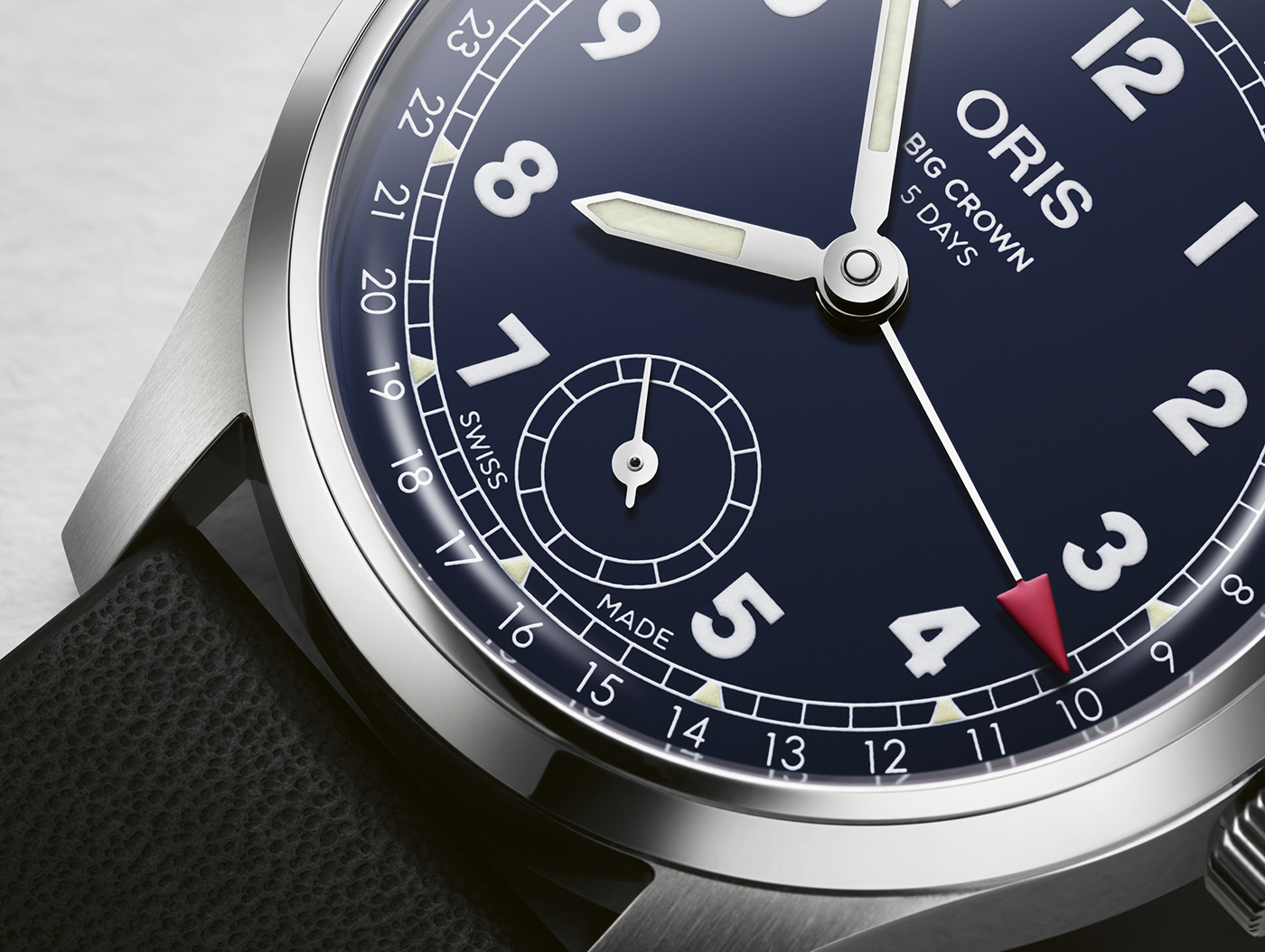 In keeping with the smoother and simpler look overall, the Oris Big Crown Pointer Date Calibre 403’s dial offers a cleaner, more streamlined design in images than its stablemates. This begins with a brightly polished new straight sword handset, replacing the previous generation’s cathedral hands with a more modern alternative. This bolder, more simplified design language extends to the printed Arabic numerals, which take on a more heavily weighted, angular typeface that abandons some of the previous Big Crown Pointer Date’s early 20th century sensibilities. Likewise, the red-tipped pointer date hand swaps the previous idiosyncratic pronged end for a classic triangular form. That said, there’s a definite sense of visual continuity in images, particularly with the nearly unchanged outer date scale and railroad minutes track. Oris’ decision to move from a central seconds layout to a 6 o’clock small seconds subdial is largely dictated by the movement, but adds back some of the antique charm from previous models that this new generation polishes away. Oris plays things classically with the dial colorway of the Big Crown Pointer Date Calibre 403, with a deep matte navy blue hue that complements the bright white dial text and red pointer date hand handsomely. 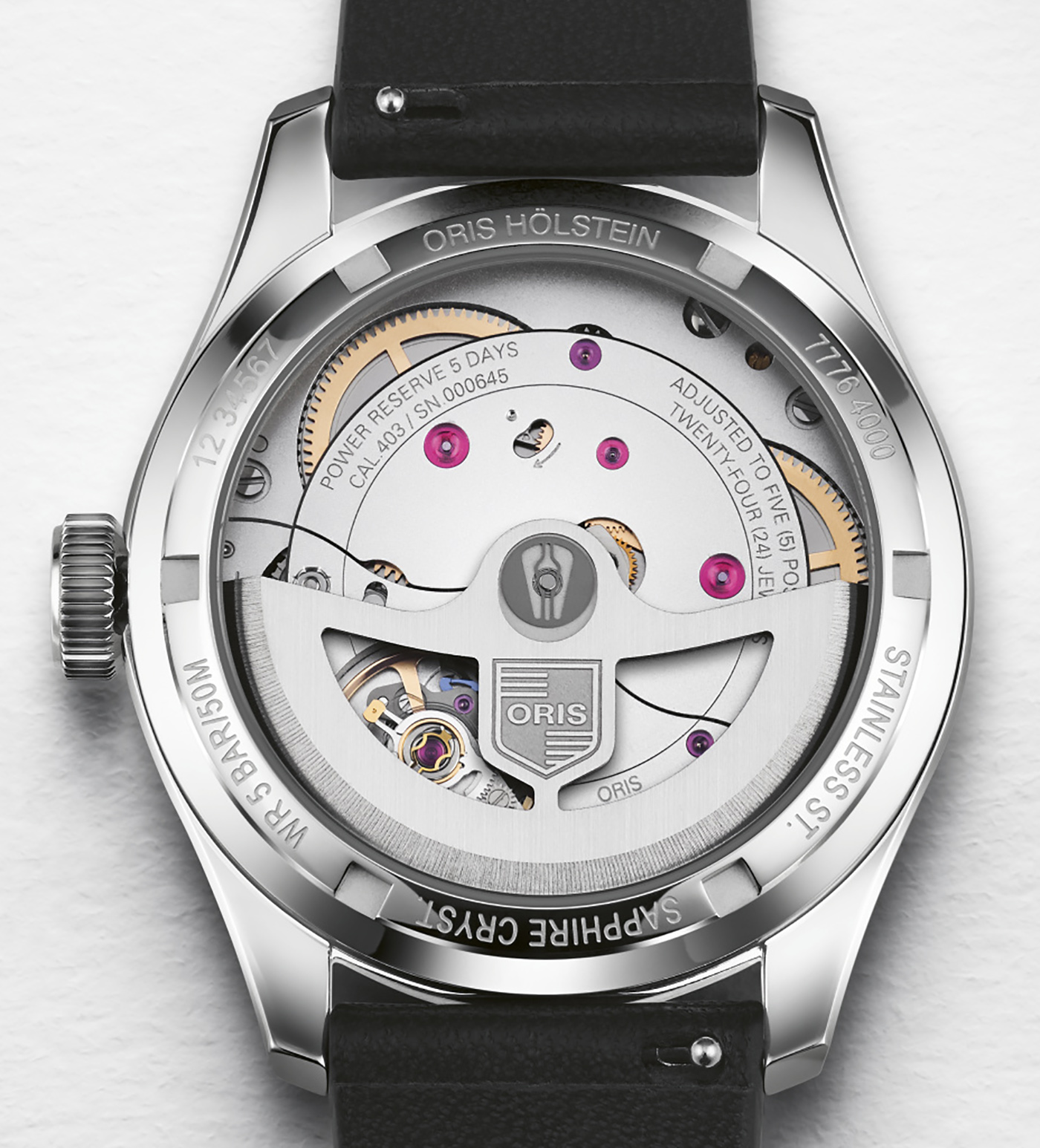 Naturally, the in-house Calibre 403 automatic movement inside the Oris Big Crown Pointer Date Calibre 403 is the centerpiece of this new design. An offshoot of the recently released Calibre 400 line, the Calibre 403 shares a family resemblance through its elemental modernist finishing. The nearly full bridges are finished with a simple matte blasted look, allowing highlights like the balance wheel and brushed skeleton rotor to take the visual spotlight. On the performance side, the Calibre 403 continues the Calibre 400 line’s stellar capability with chronometer-grade -3/+5 seconds per day accuracy, although Oris does not send these movements to COSC for certification. The Calibre 403’s power reserve capability is similarly impressive, offering a massive 120 hours at a 28,800 bph beat rate. Oris even claims above-average reliability, providing a 10-year movement warranty and recommending a 10-year service interval. Oris keeps the cleaner overall look of the Big Crown Pointer Date Calibre 403 intact with its strap pairing, completing the package with a minimal stitchless black leather strap featuring quick-release spring bars.