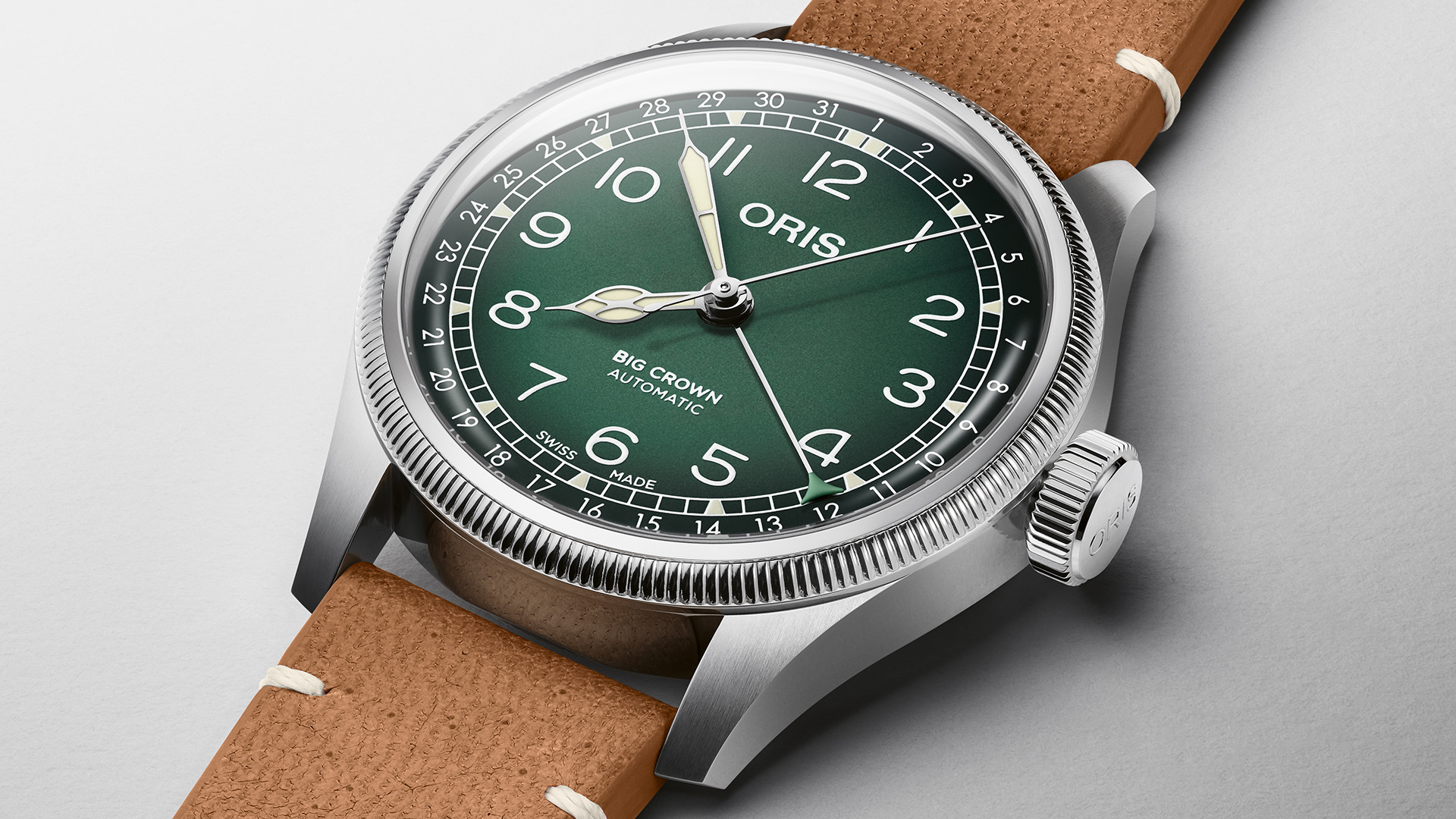 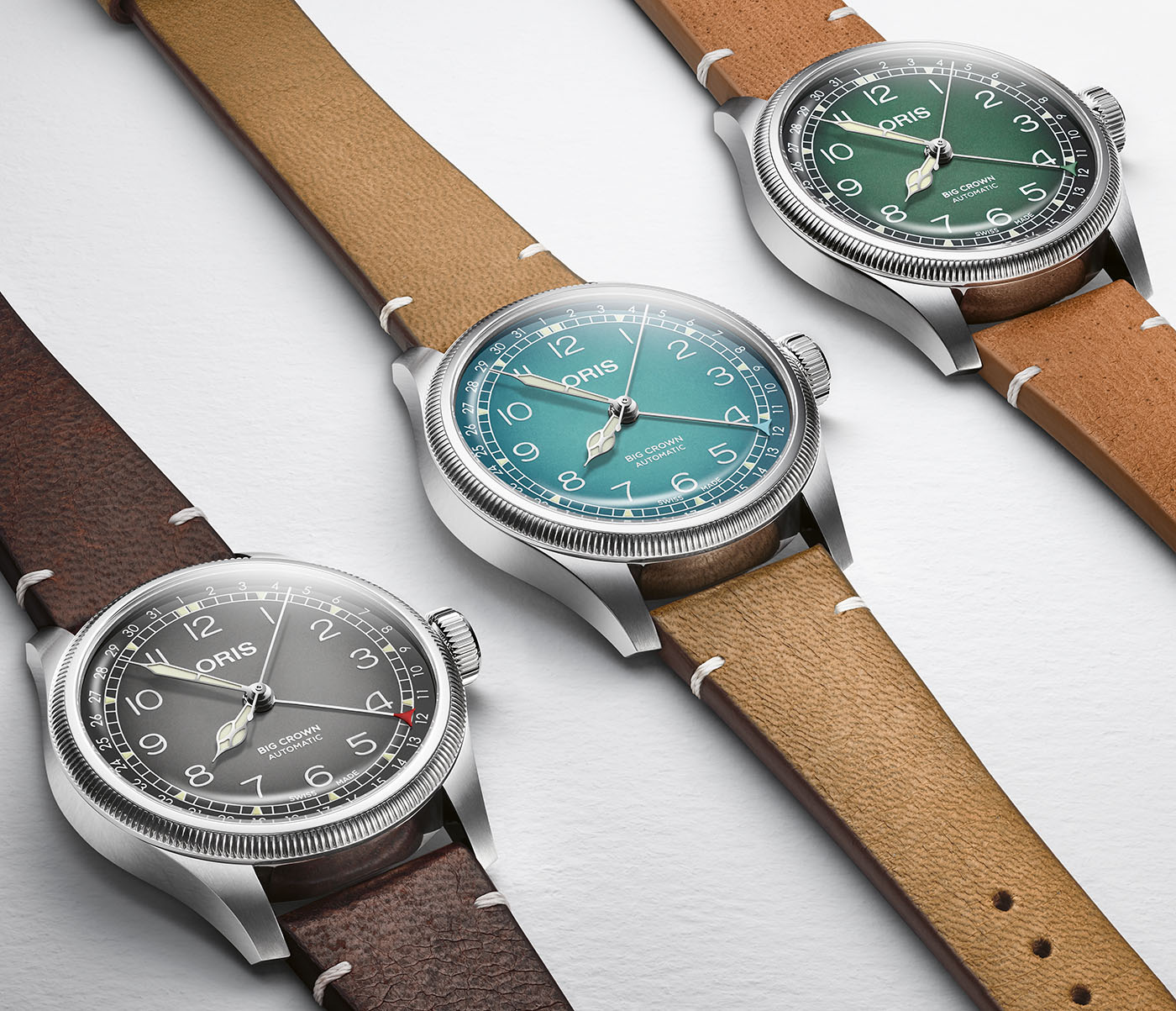 As a champion of global conservation and wildlife protection efforts, Oris has spent the last several years supporting environmental causes, ranging from preserving the coral reefs of the Florida Keys to cleaning the Hangang River in South Korea. For its first major release of 2022, the independent Swiss brand has taken on a cause closer to home, partnering with sustainable leather brand Cervo Volante to shine a light on the ongoing effort in Switzerland to control the wild red deer population and protect the country’s forest ecosystems. The result of this partnership is the new Oris Big Crown X Cervo Volante, which pairs an Alpine-themed take on Oris’ signature Big Crown Pointer Date design with sustainable deer leather straps harvested from the annual sanctioned culling of the Swiss red deer population. 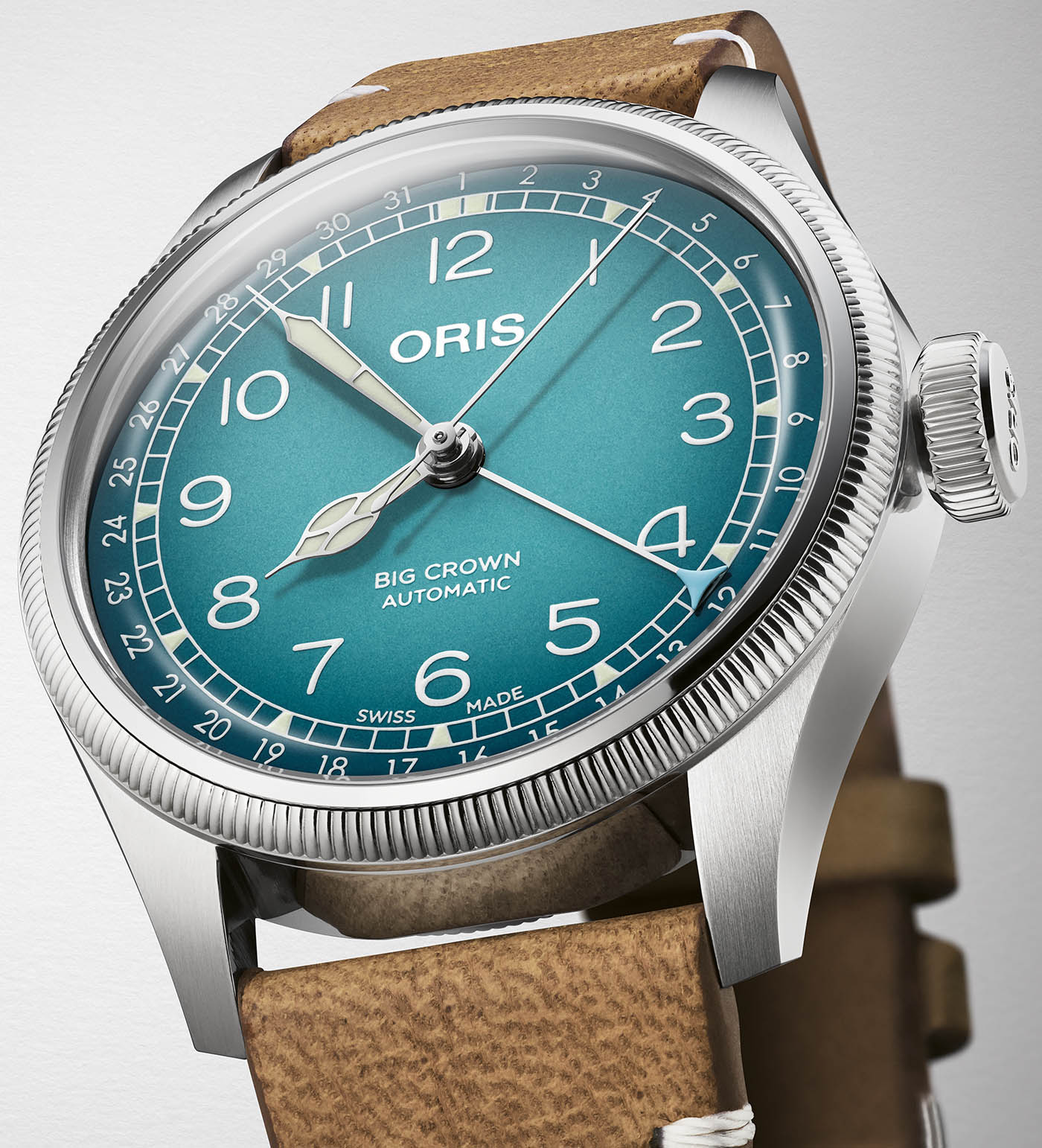 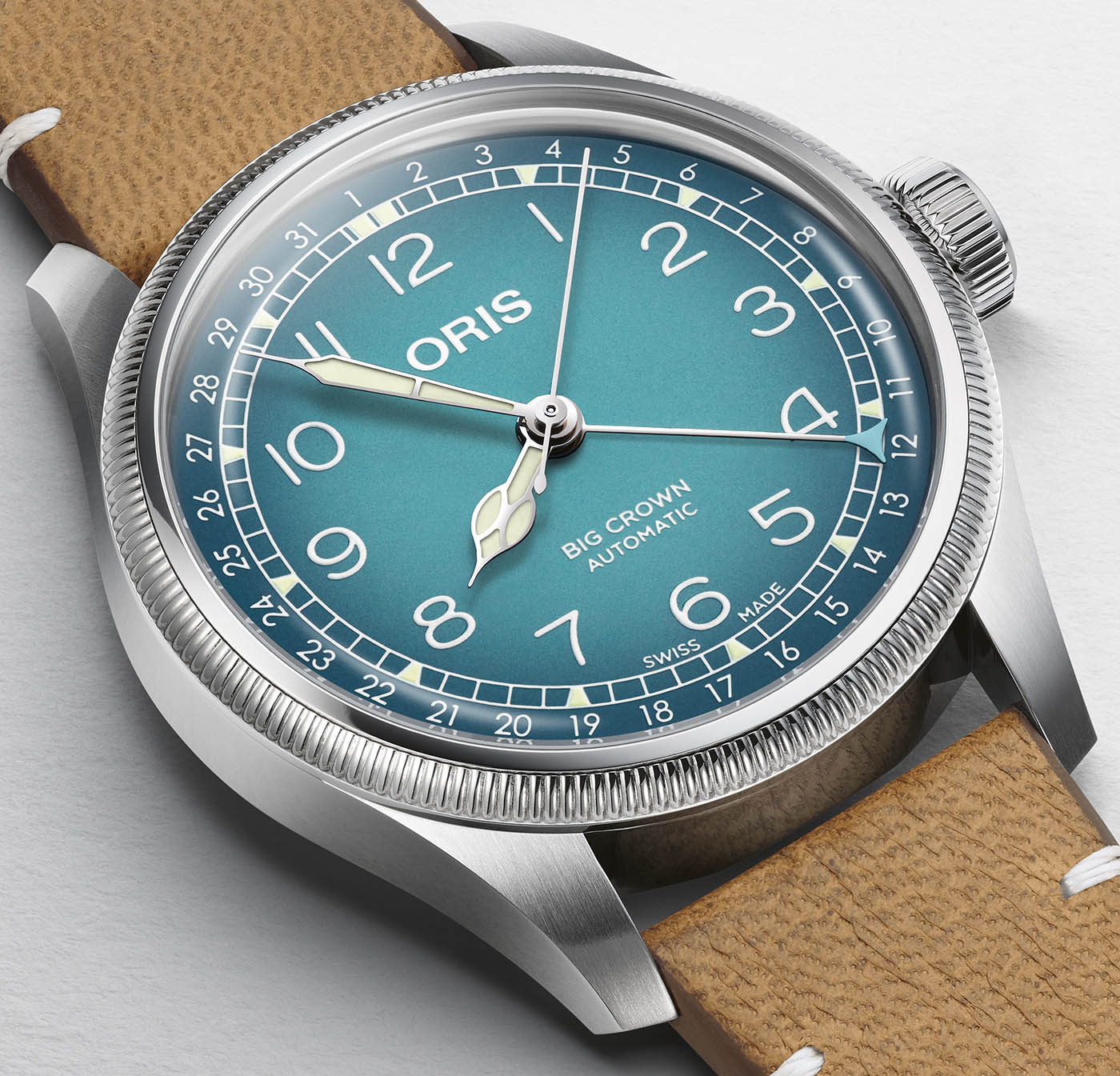 Oris equips the Big Crown X Cervo Volante with a trio of dial options inspired by the natural landscapes of the Swiss Alps. All three variants share the same dial layout as their 40mm cousins, but with slight modifications to better fit their smaller dimensions. Naturally, the series’ railroad outer pointer date track is carried over without adjustment, maintaining the line’s pleasingly busy midcentury feel in images. Although many dial designs downsized for a smaller case can feel overcrowded or cramped, Oris appears to combat this in images by slimming down the line’s rounded Arabic hour numerals slightly. The effect is subtle enough to keep the overall character of the dial intact but allows these smaller renditions enough negative space to still appear airy and balanced. All three variants of the Oris Big Crown X Cervo Volante also use a pale khaki fauxtina lume for their cathedral handsets and hours markers, which adds a touch of subtle warmth to complement the cooler hues of the dial surfaces. Each of the three dial colorways evokes a different part of the Alpine landscape, from the green of its forests to ice-blue glaciers to the stony grays of the mountains themselves. The matte-gray degrade dial is the most restrained and versatile of the three, transitioning gradually from a warm concrete gray in the center to nearly black at the edge. Oris gives this muted colorway a pop of vibrance in images with its signature two-pronged pointer date hand, adding a tip in deep crimson. The deep hunter green colorway strikes a middle ground between versatility and eye-catching uniqueness in images, with its gradient from warm British racing green to black interacting handsomely with the khaki tones of the lume. Oris decides to pair this richer color palette with a more restrained pointer date hand, which receives a tone-on-tone tip in a brighter shade of green. The most striking of the three dial variants, however, is the ice blue version. With an intense, mottled turquoise tone in images, this frigid tone gives the familiar design a fresher and more energetic look than its stablemates. Oris tops this off with a pointer date hand in lighter robin-egg blue. 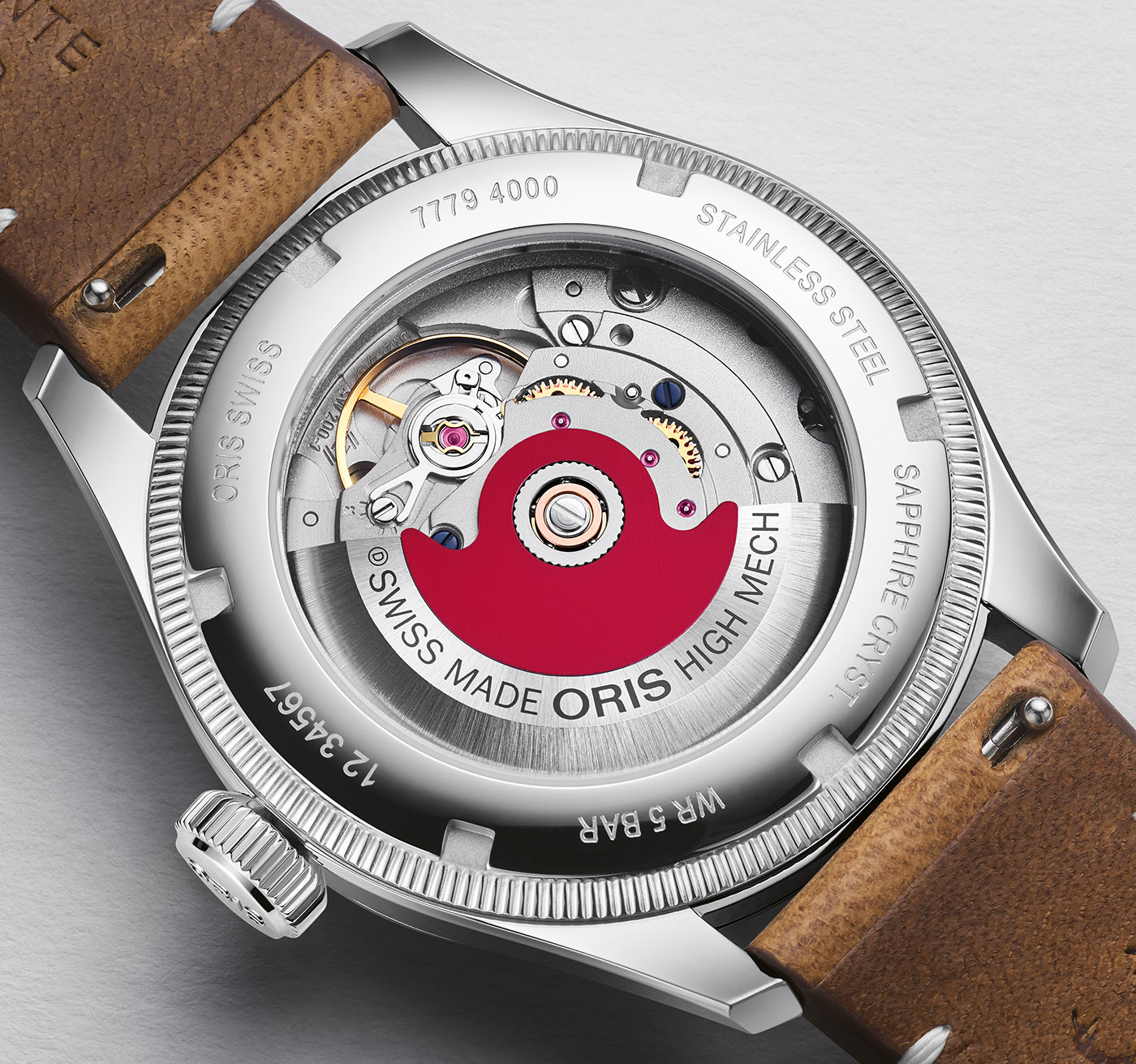 Inside the Oris Big Crown X Cervo Volante beats the Sellita SW200-based Oris 754 automatic movement. The Oris 754 has long been a part of the brand’s lineup, but as Oris turns increasingly towards more capable in-house movements for the upper levels of its catalog this movement’s 38-hour power reserve at a 28,800 bph beat rate is becoming increasingly dated. The Oris 754’s finishing is clean and restrained, with a simple matte texture across the bridges flanked by blued screws and the brand’s signature red winding rotor. 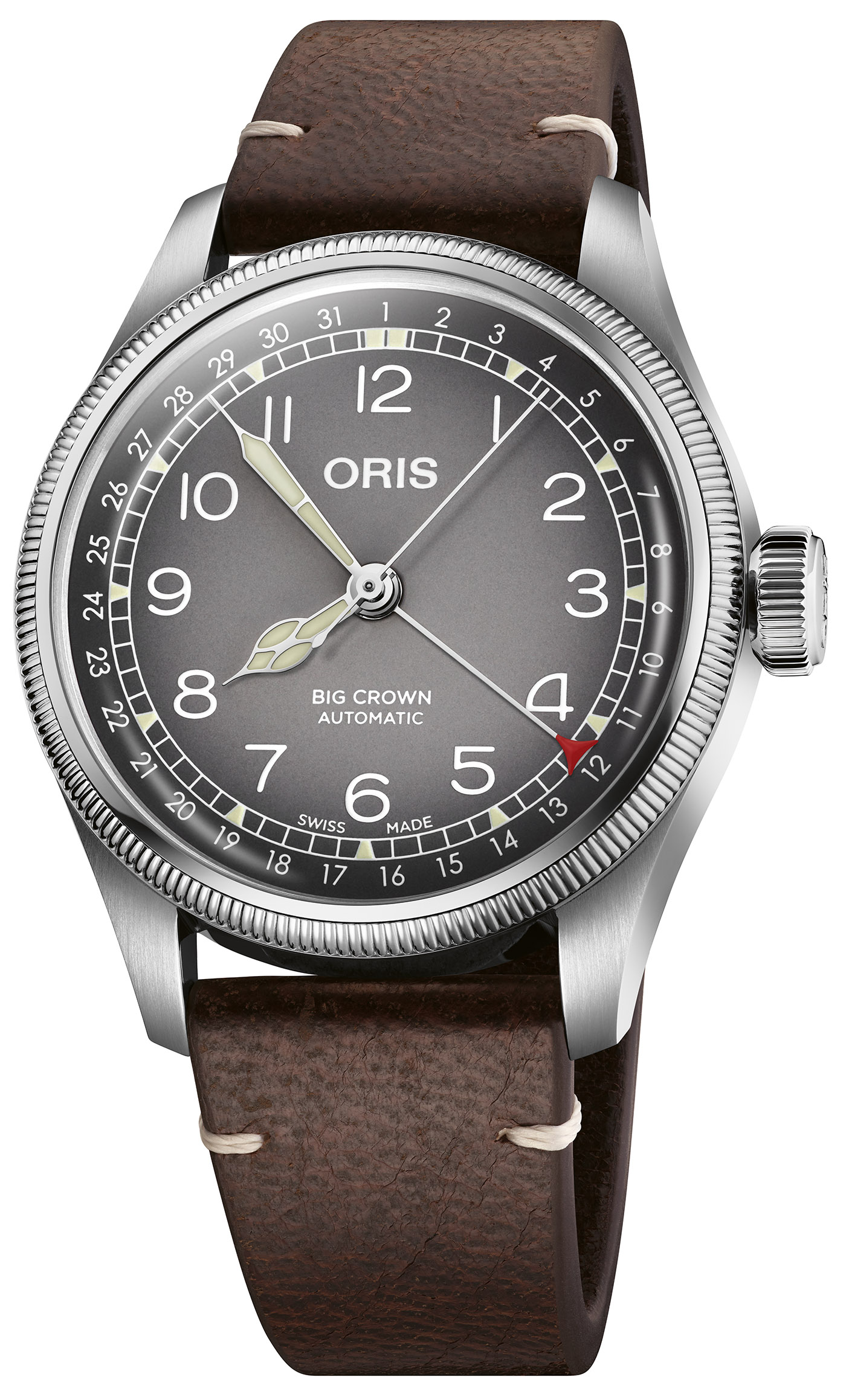 Swiss sustainable leather brand Cervo Volante’s contribution to the Oris Big Crown X Cervo Volante comes in the form of a trio of dynamic, heavily textured deer leather straps. The leather for these straps is sourced from the roughly 15,000 wild red deer culled across Switzerland each year as part of a government-sponsored population control program intended to protect the country’s alpine forest ecosystems. While in previous years, these deer were simply disposed of, Cervo Volante aims to create useful and attractive leather goods from these animals. Each of the three dial variants is paired with a unique strap color. For the gray dial model, Cervo Volante provides a strap in deep coffee brown, with reddish dynamic highlights. For the brighter tones of the blue dial, the brand instead chose a light golden brown strap, and the green dial version is paired with a rich caramel brown strap.

With a smaller, balanced case design, nuanced dial colorways, and straps that handsomely support a vital conservation effort, the new Oris Big Crown X Cervo Volante is an intriguing and environmentally conscious addition to one of the brand’s keystone collections. The Oris Big Crown X Cervo Volante is available now through authorized dealers. MSRP for this watch is $2,000 as of press time. For more details, please visit the brand’s website.