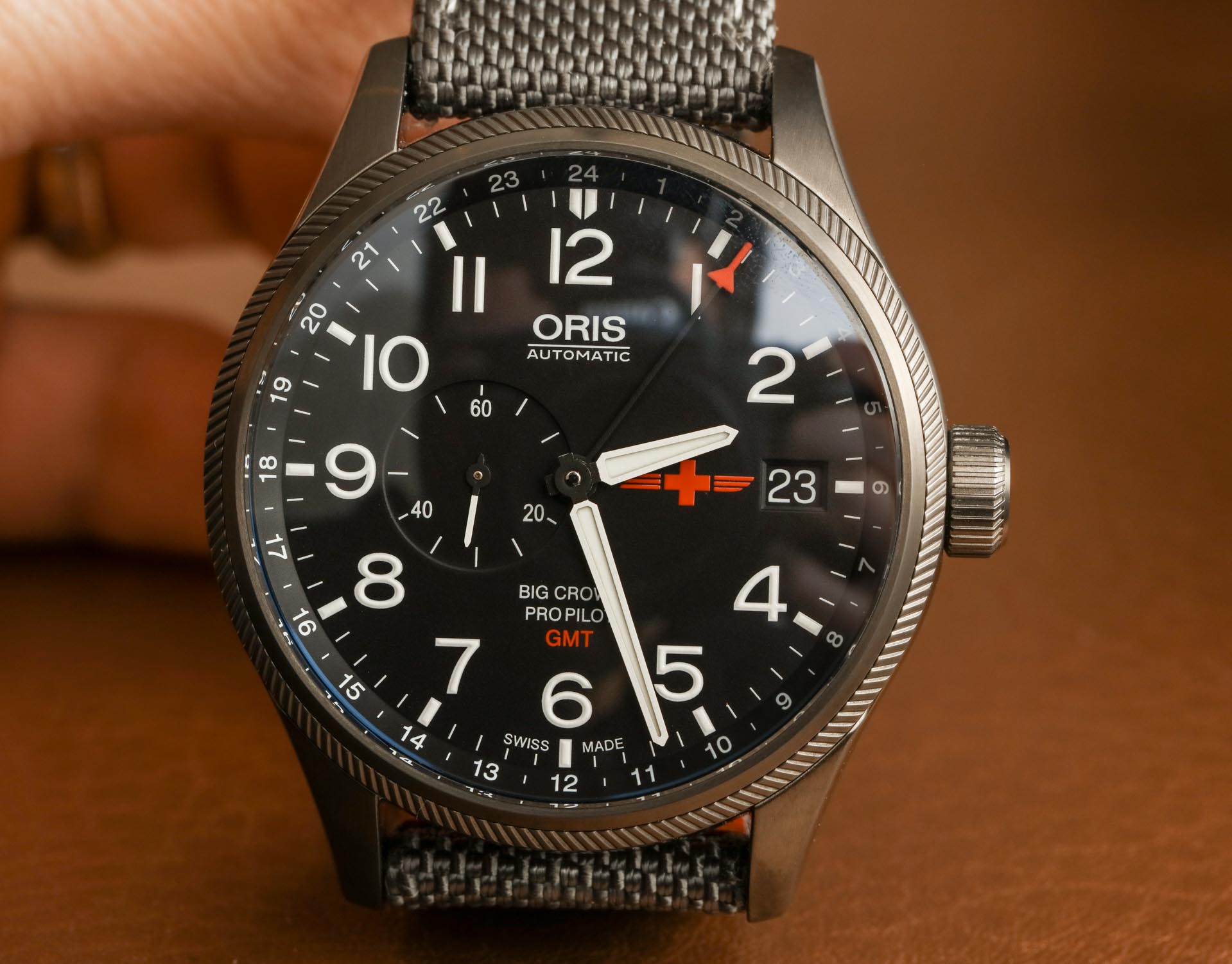 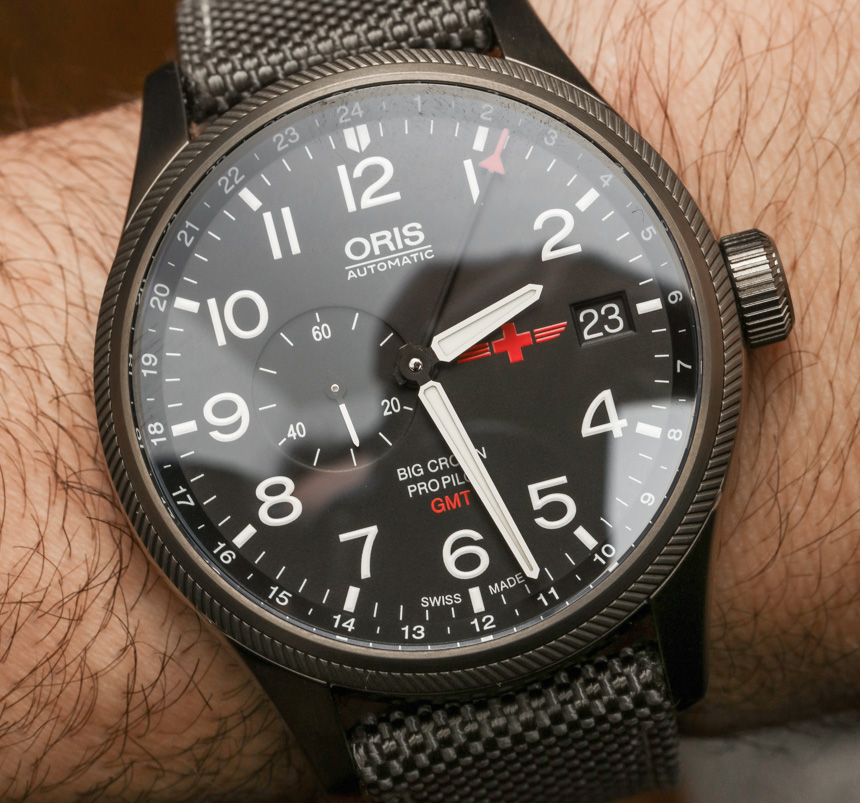 Based in Hölstein, Oris is one of the few remaining independent Swiss watchmakers in an industry dominated by large conglomerates. Aviation has always been a strong focus for the brand, and they began producing their “big crown” pilot watches back in 1938. For the past few years, Oris has partnered with the air-rescue foundation Rega, an independent, humanitarian body which provides emergency medical assistance via helicopter and ambulance jet both in Switzerland and internationally. Oris have dedicated two watches in support of this foundation; the Altimeter Rega Limited Edition from last year, and the Oris GMT Rega Limited Edition being discussed here. 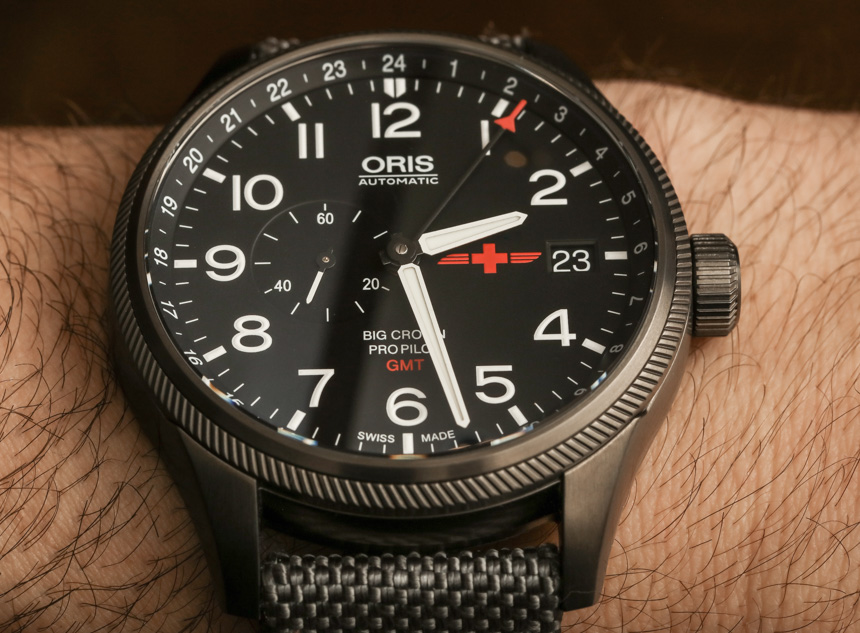 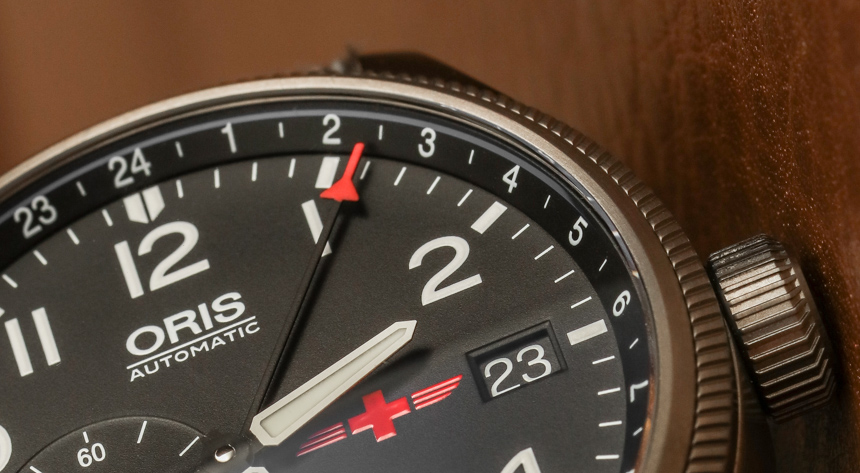 With a 45mm steel case, the Oris GMT Rega Limited Edition would be considered a large watch by most standards. This isn’t uncommon with aviation watches, which need to be as legible as possible for pilots to refer to mid-flight. By comparison, German Flieger watches in World War II were made with 55mm cases, and even last year’s Oris Altimeter Rega Limited Edition had a hefty girth at 47mm. The Oris GMT Rega Limited Edition can thus be considered a sensible size, striking a good balance between everyday wearability for the non-pilot and its intended use as a serious aviation timepiece. The case has been PVD coated to a gunmetal grey finish, which the brand advises us is intended to reduce cockpit glare. 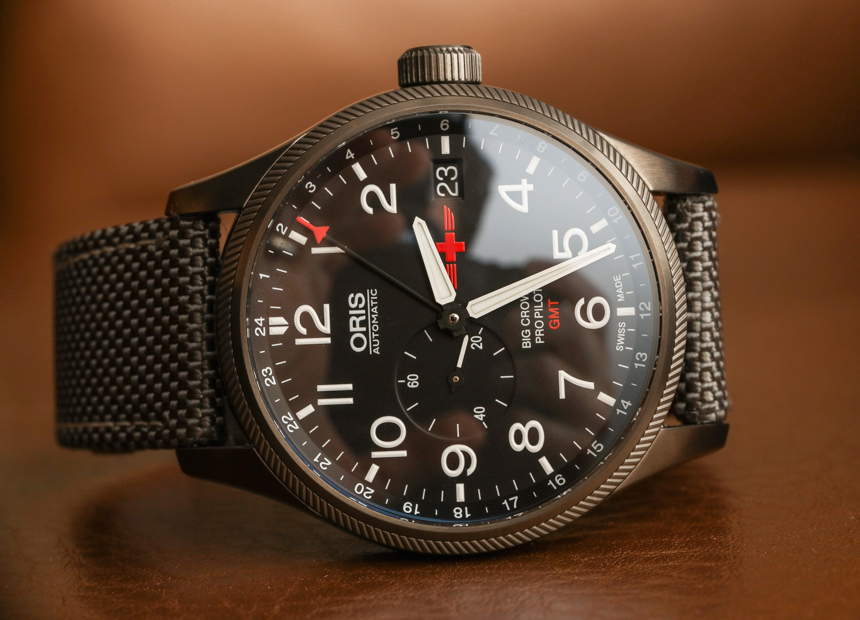 The Oris GMT Rega Limited Edition makes use of a 24-hour time scale along the periphery of the dial for its GMT function, with a pointer hand tipped with a stylized red airplane to indicate the time in the second time zone. GMT watches and aviation have a long history, the complication arising from a request by Pan American World Airways to Rolex back in the 1950s to develop a watch which could tell the time in different time zones simultaneously. In that era of aviation, Greenwich Mean Time was the international civil time standard, and thus when Rolex designed a watch to suit the requirements of the Pan-Am pilots, it was dubbed the GMT-Master. The Oris GMT Rega Limited Edition is thus a fitting tribute to Rega’s pilots who often cross international borders (and time zones) for repatriations of seriously ill patients. 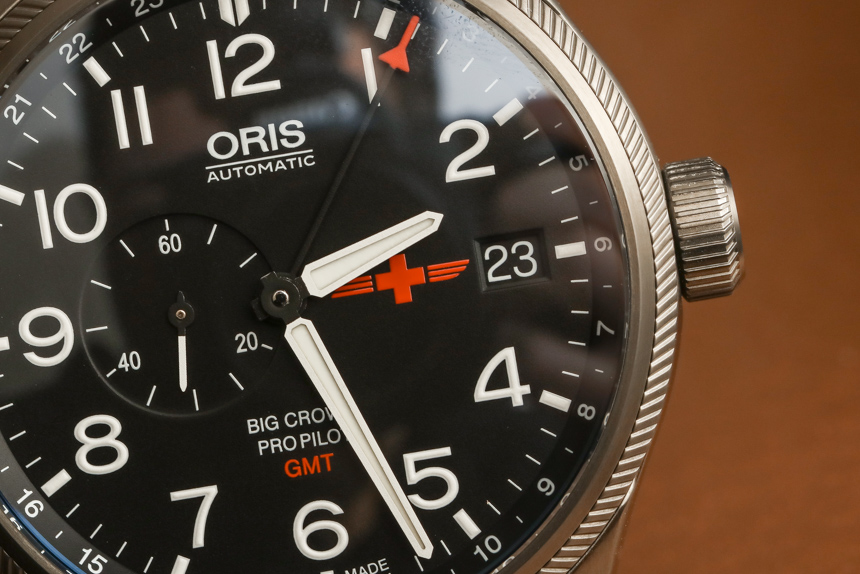 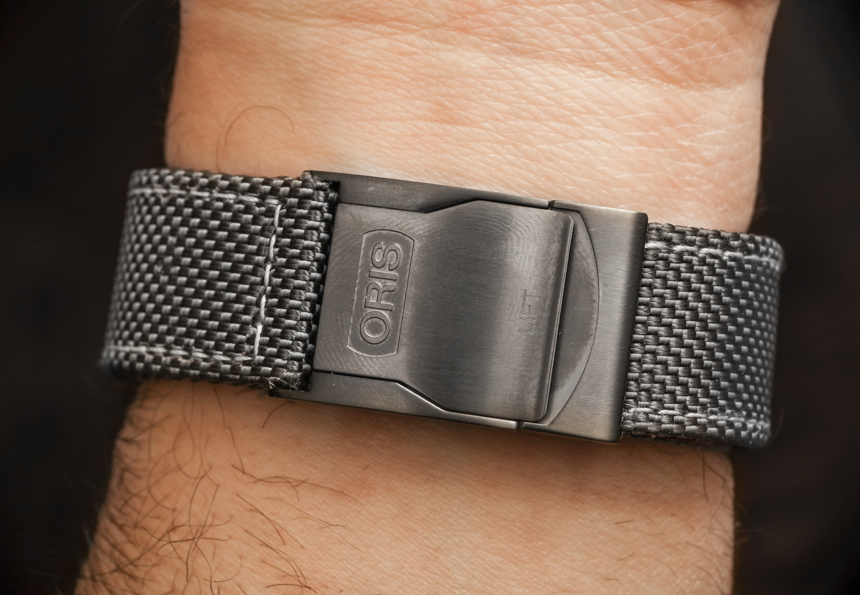 This release is based closely on an existing model in the brand’s aviation collection, the Big Crown ProPilot GMT Small Second. Unlike the production model, the Oris GMT Rega Limited Edition has a solid caseback engraved with Rega’s logo and the watch’s serial number, and features a black dial rather than the ProPilot’s grey. This was likely an aesthetic decision to provide as much contrast to the red design cues as possible, which is Rega’s corporate color. Rega’s red logo can be found at 3 o’clock on the dial, while the “GMT” text at 6 o’clock and the GMT hand’s “airplane” tip are also in red. The Oris GMT Rega Limited Edition will also be supplied with a special presentation case, again printed with the Rega logo. 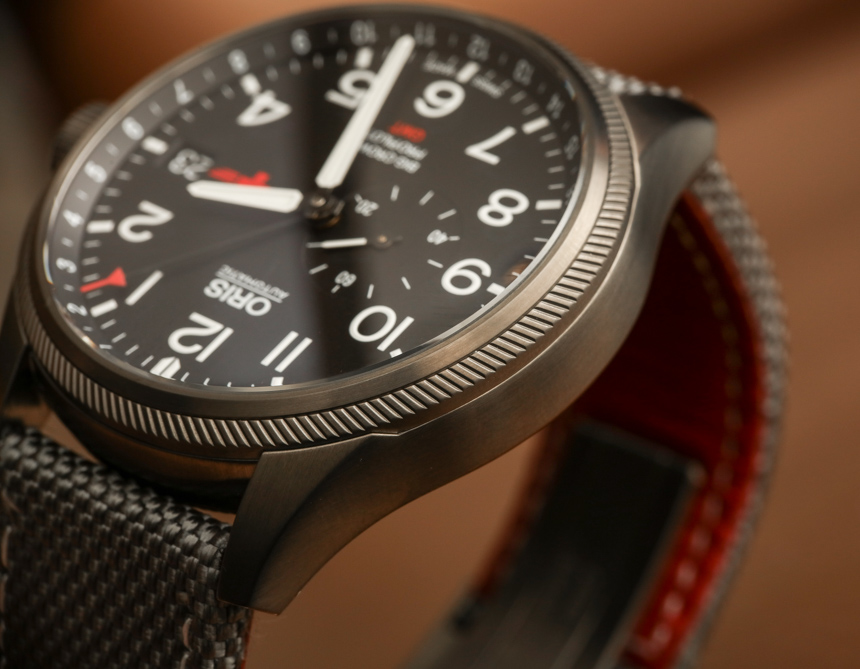 These differences aside, the Oris GMT Rega Limited Edition is otherwise identical to the Big Crown ProPilot GMT Small Second. The hands and Arabic numerals are large, white, and coated with Super-LumiNova for maximum contrast and night legibility. A date aperture can be found at 3 o’clock, while the small seconds sub-dial occupies the 9 o’clock position. The case has a coin-edged bezel which is angled in a way that resembles the turbine of a jet engine, but unlike the Oris Big Crown ProPilot Worldtimer (which we covered here), this bezel does not operate as a time-setting mechanism for the GMT function, which is a shame. 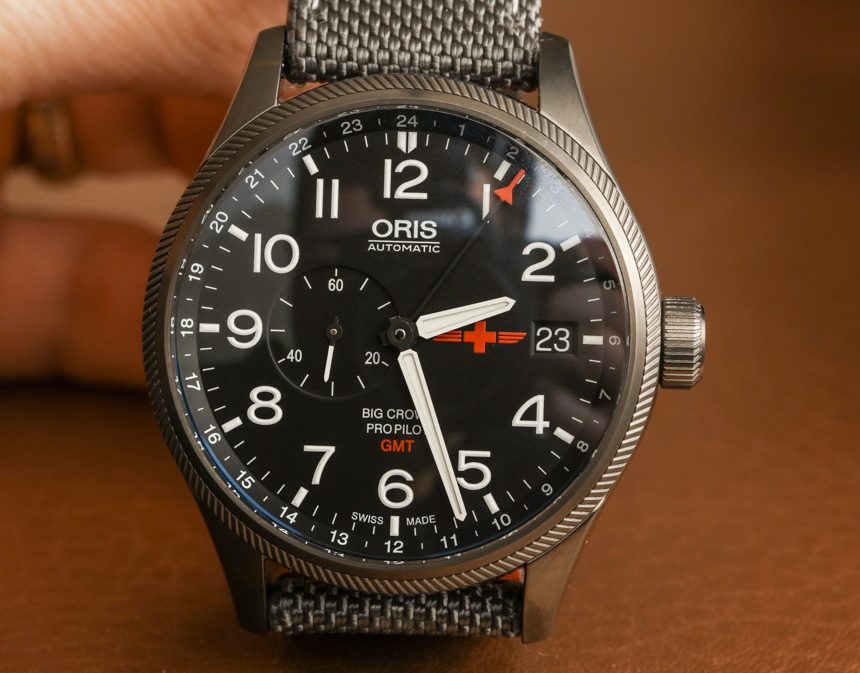 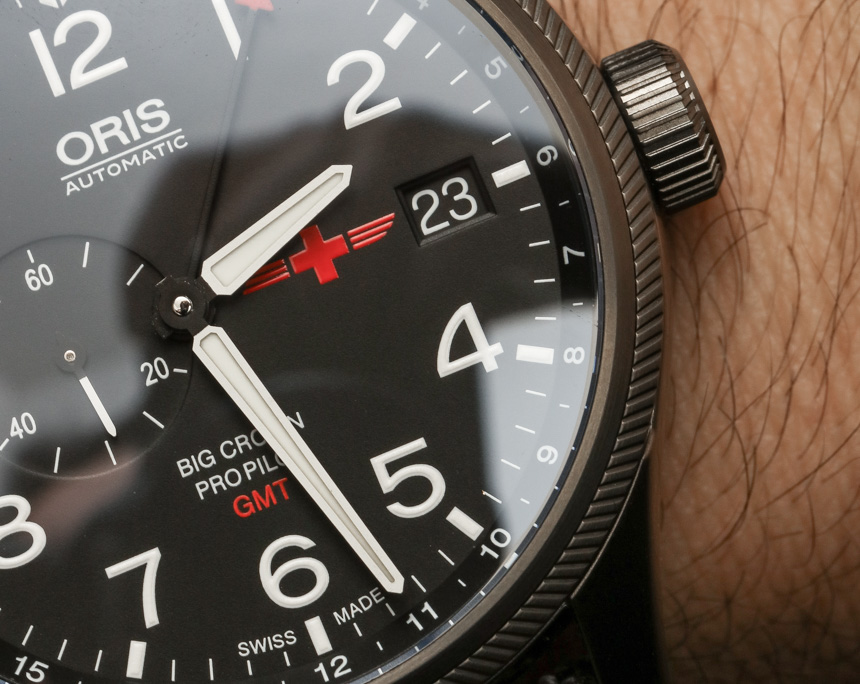 The case of the Oris GMT Rega Limited Edition is water-resistant to 10 Bar (approximately 100m), making it suitable for swimming with if the wearer was so inclined. It comes attached to a grey textile strap lined with red leather (another nod to Rega), equipped with a folding clasp in gunmetal grey PVD-coated steel featuring an embossed Oris logo. The signature large crown is also PVD coated, screws down into the case, and is deeply grooved to make setting and winding the watch easier, a feature designed to aid pilots wearing gloves. The dial on the Oris GMT Rega Limited Edition is covered by a domed sapphire crystal with an anti-reflective coating on the inside. 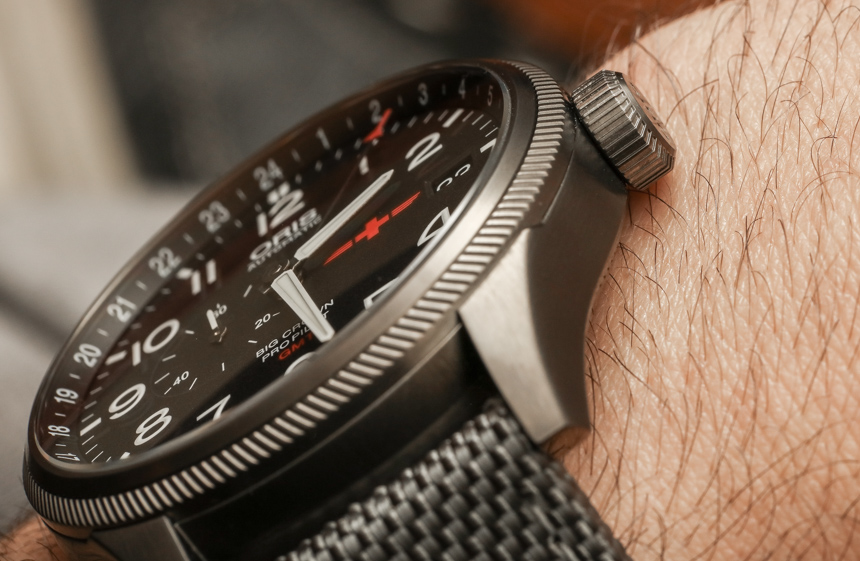 Powering the Oris GMT Rega Limited Edition is the automatic winding Oris Cal. 748, which is based on the Sellita SW 220-1. This movement features a ball-bearing rotor and hacking seconds, 28 jewels, offers a relatively meager power reserve of 38 hours, and oscillates at the modern frequency of 28,800 A/h or 4Hz. The fast movement somewhat accounts for this lackluster power reserve, but I would have liked to see Oris install either multiple or larger mainsprings to compensate for this, as surely a 45mm case offers plenty of room. Prospective wearers will need to keep quite active or make use of that large crown to ensure the Oris GMT Rega Limited Edition stays wound. 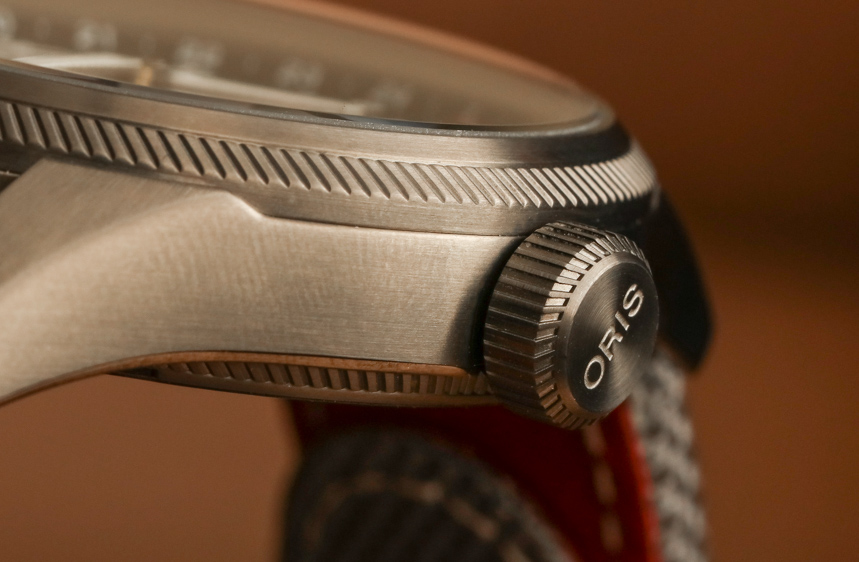 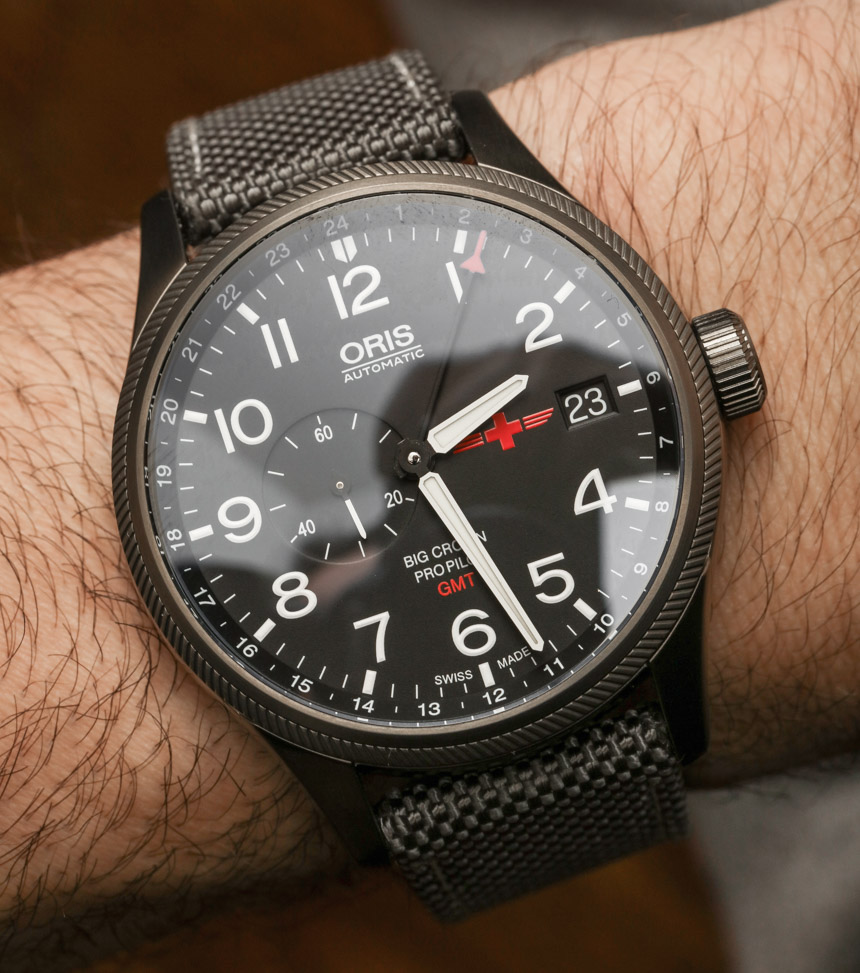 The Oris GMT Rega Limited Edition is being produced in 2,000 units and has a sticker price of 2,550 CHF, which is 300 CHF more than the production model Big Crown ProPilot GMT Small Second. In my opinion the pops of red against the black dial in this model are visually more appealing than the yellow and white on grey palette of the production model, but justifying the extra cost will likely boil down to one’s individual support of Rega and their humanitarian work. Particularly for those that wanted to get on board with the Altimeter Rega Limited Edition but missed the boat (or should that be helicopter?), the Oris GMT Rega Limited Edition offers an attractive and well-sized GMT pilot’s watch for the price. oris.ch