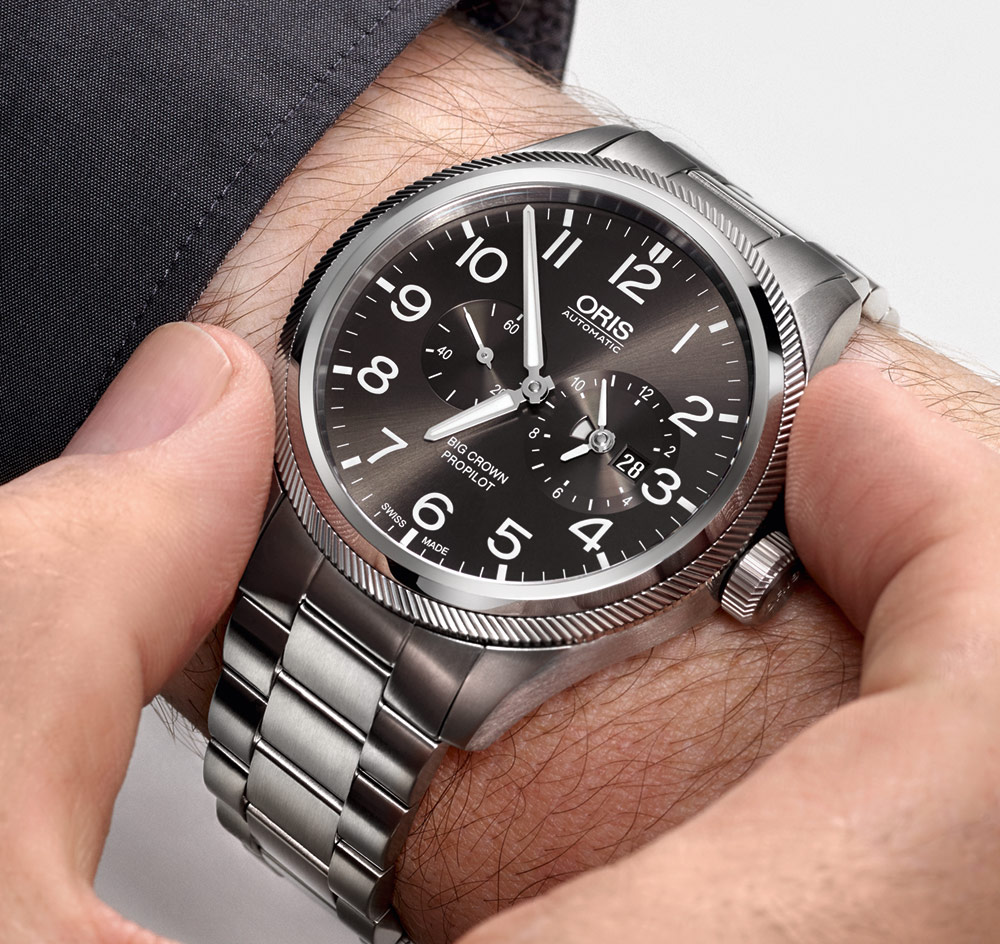 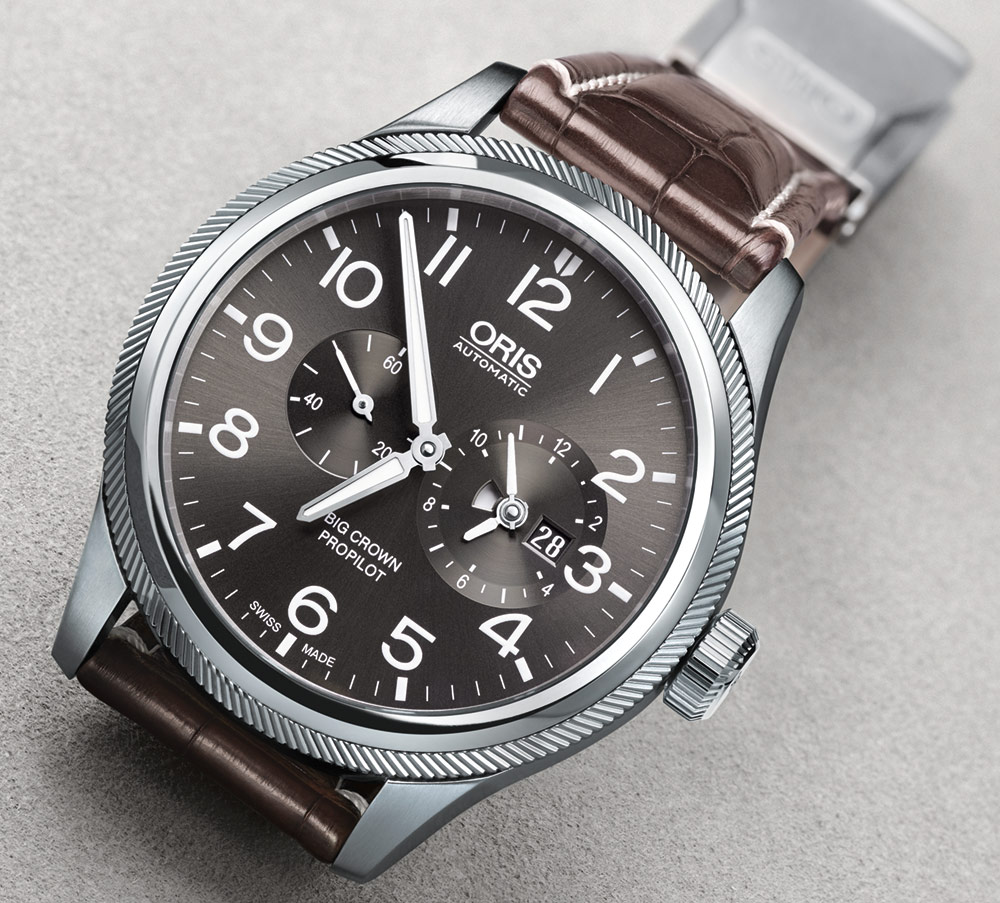 Coinciding nicely with the 20th anniversary of their original Worldtimer watch, Swiss watch maker Oris has released an updated model for 2017 with the Oris Big Crown ProPilot Worldtimer. First released to much acclaim in 1997, the 2017 version features a new time-setting mechanism. Something to clarify right away is that despite the word “Worldtimer” in its name, the Oris Big Crown ProPilot Worldtimer is in fact a dual-timezone watch – and not one that shows many time zones around the world simultaneously, which is usually what a “world time” watch refers to (many examples here).

To provide some context, the 1997 Oris Worldtimer was notable because the hour hand for the local time could be adjusted back or forward in one-hour increments using pushers in the caseband. This meant that one could adjust time without having to pull out the crown and stop the watch. Additionally, it featured a patented mechanism through which the date would keep track in either direction. So if you used the pushers in the case to move back several hours and moved past midnight, the watch would automatically move the date backwards as well. Overall, for someone who crosses timezones often, this meant that you could adjust the local time with a series of quick presses of the correct pusher and not worry about jamming a date wheel or synchronizing time down to the minute. You can see why this recipe hasn’t changed for 20 years. 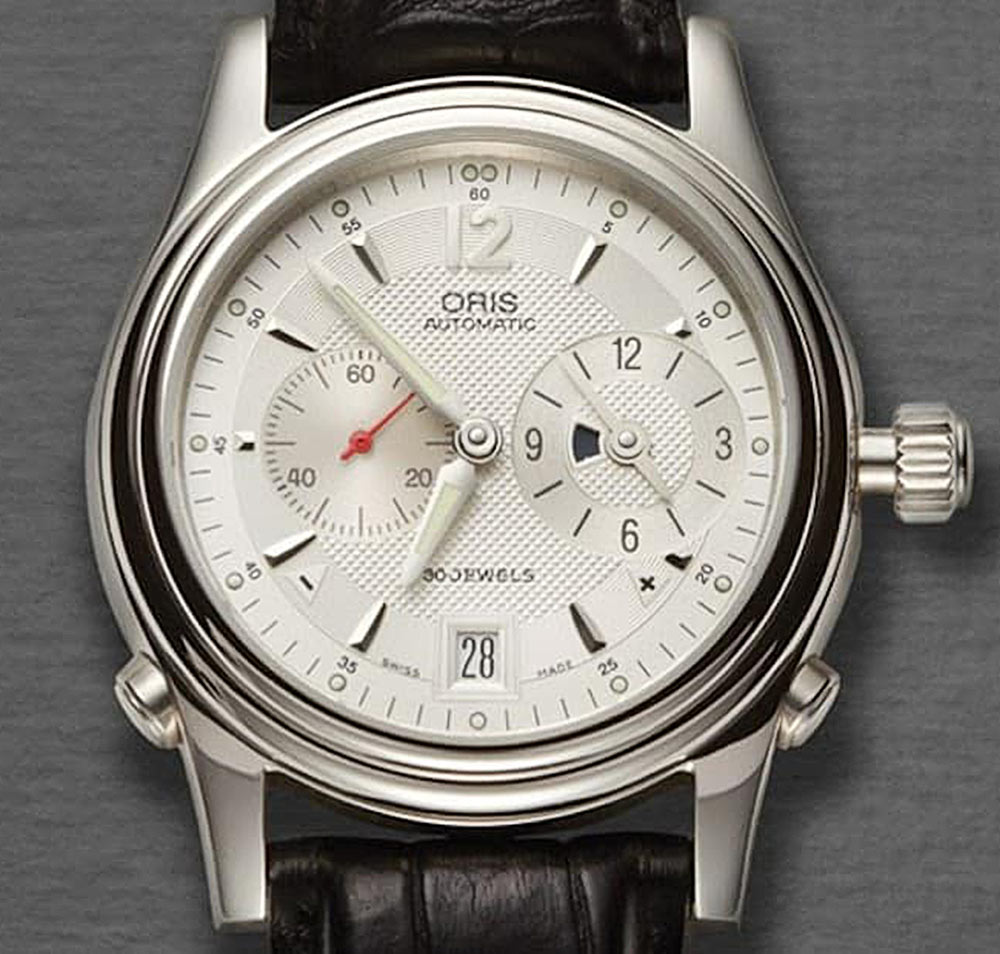 The observant reader will have noticed that the new Oris Big Crown ProPilot Worldtimer does not have the two pushers anymore. The hour hand for the local time is now adjusted via the coin-edged bezel on the watch. Time is still set in one-hour jumps with the bezel and it is bi-directional, which means that turning the bezel counterclockwise will make the time displayed jump backward (including the date wheel as necessary). While there is nothing wrong with using pushers or the crown to set the hour hand, there is a simplicity to this method that is very appealing. To me, this is not a case of being unique for the sake of uniqueness but an intuitive, practical approach. 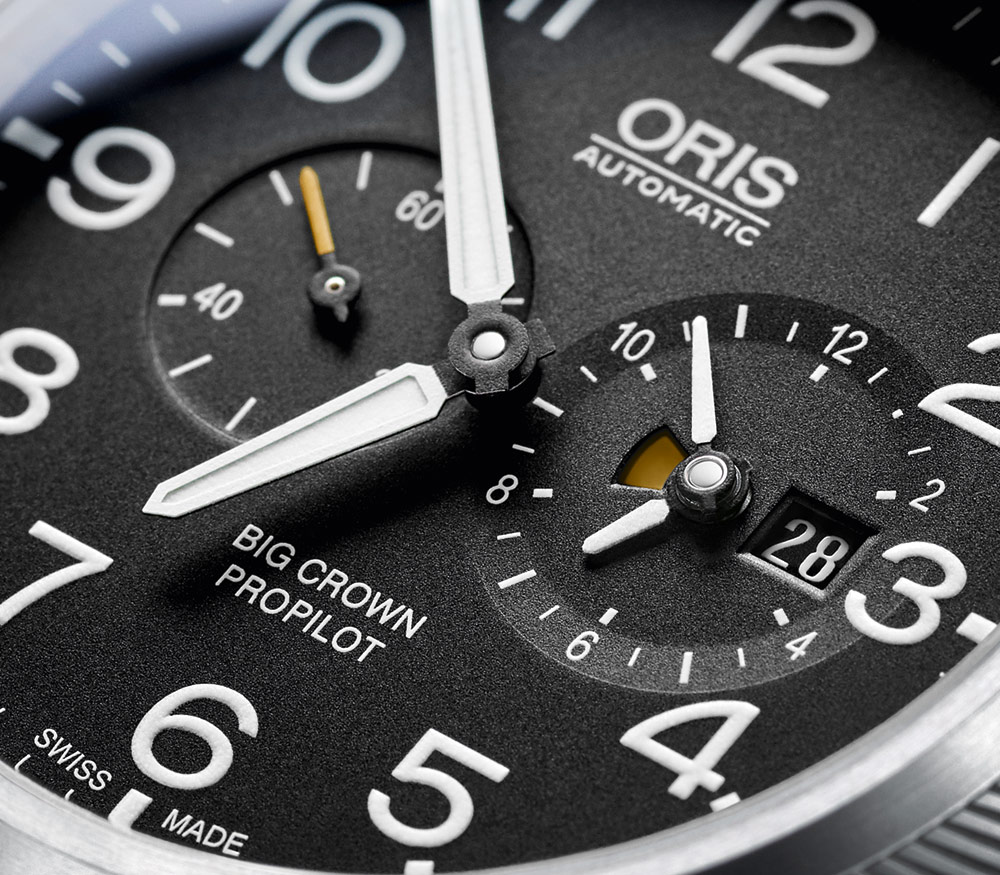 Aesthetically, there are a few changes from the previous Oris Worldtimer (that has resided in the Artelier collection) aside from the lack of pushers. The day/night indicator, date, home time, and running seconds functions all remain, and it is still at its heart, a large, legible, functional pilot’s watch. At 44.7mm in diameter, this is not a small case but it ensures that the dial has good legibility despite the number of indicators. As far as the Oris Big Crown offerings go, this sits in the middle size-wise, as the range has watches from 41mm up to 47mm. The case is stainless steel with a multi-part construction that is mostly brushed. The prominent design feature is the bezel with its coin-edged finish that is complemented by the large, ergonomic, fluted screw-down crown. The coin-edging ensures that the bezel has sufficient grip to make the time adjustments an easy task to execute, but I also think it lends the watch an interesting look that suits it well. There is a display caseback and the watch is rated to 100m of water-resistance. 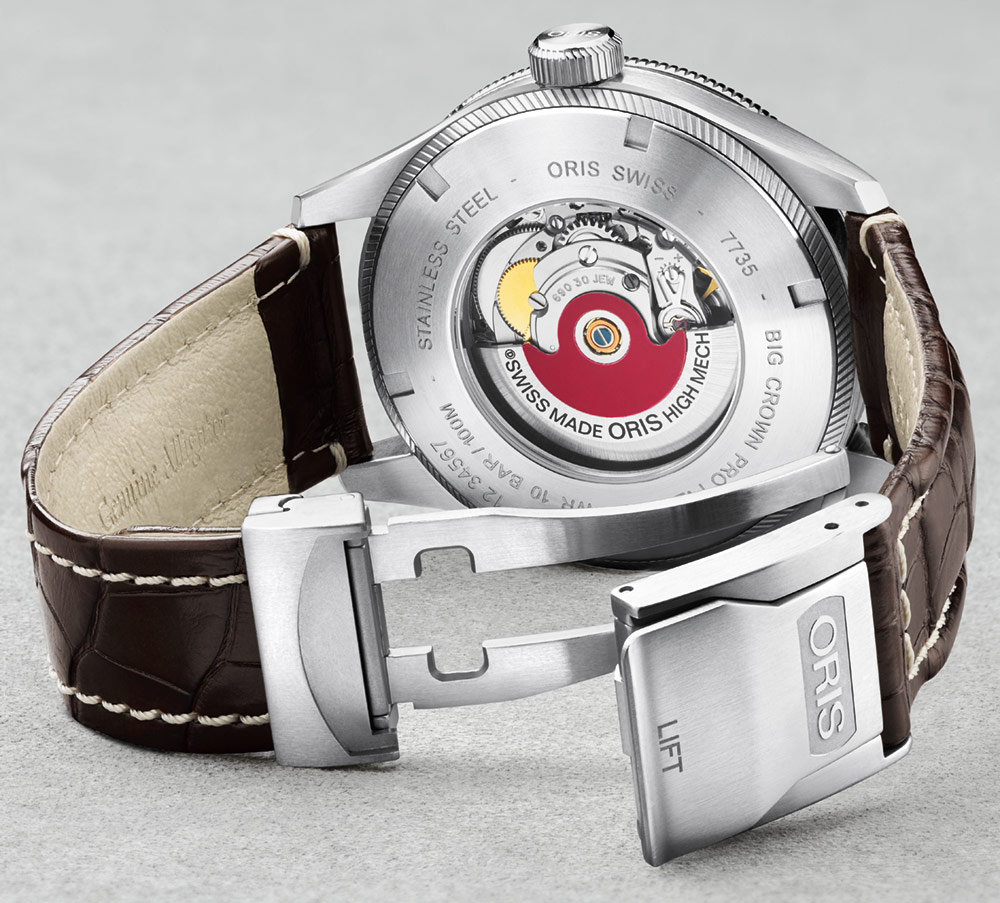 There are two dial options for the Oris Big Crown ProPilot Worldtimer – black and an anthracite sunburst. The black dial option comes with a bezel top (the small bezel between the coin-edged portion and the sapphire crystal) that is brushed, while the anthracite has one that is polished – presumably to reflect the sunburst nature of the dial. It’s hard to tell if the polished vs. brushed bezel top makes a significant visual difference from the press images, so I’ll hold off any comment until a hands-on look. 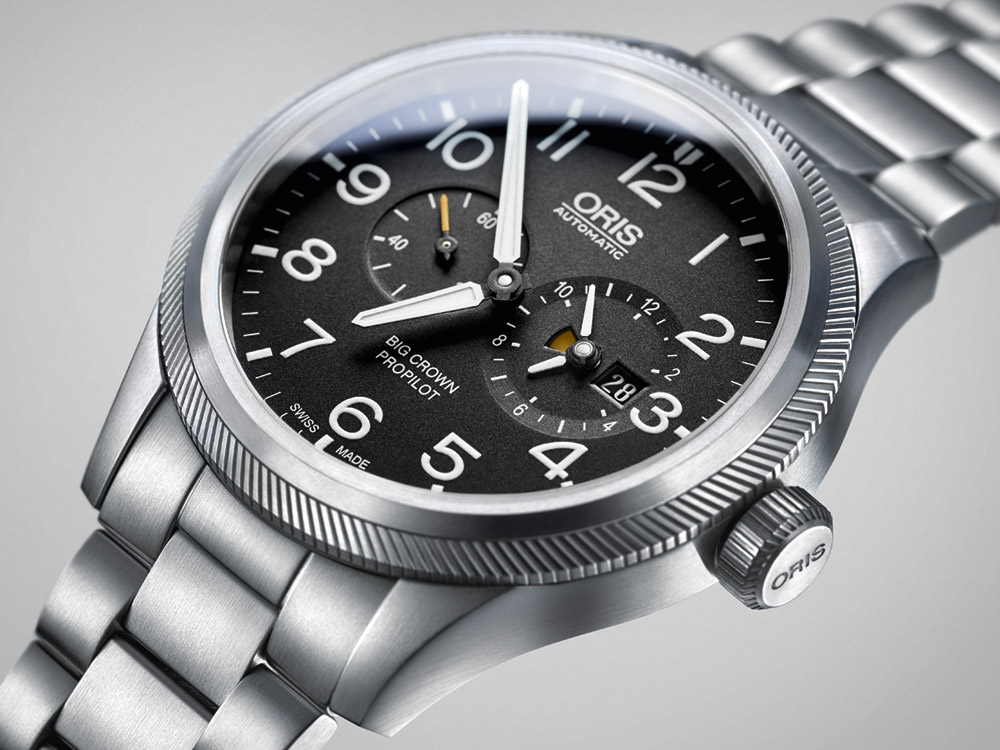 In terms of layout, the primary hour makers are large Arabic numerals printed in Super-LumiNova to ensure visibility in the dark too. There are two sub-dials at 3:00 and 9:00 with the former showing home time in hours and minutes, a date window and the day/night indicator. Even after the larger dial size to increase legibility, this crowded sub-dial may be a bit cluttered for some tastes. The sub-dial at 9:00 shows the running seconds for the local time display. All but the running seconds hands are sword-shaped with the local time display hands filled with Super-LumiNova. Another difference between the anthracite and black dials is the running seconds hand which is orange in the former and white in the latter, which I can only interpret as Oris’ attempt to make one look more casual/sporty than the other. 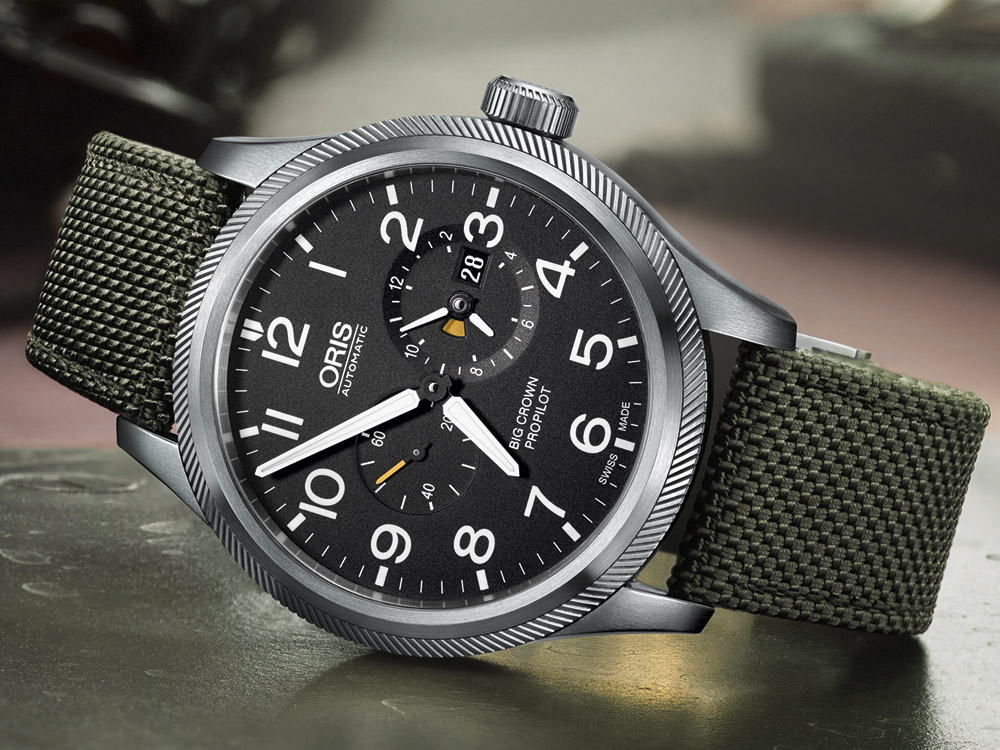 The watch is powered by the Oris Caliber 690 which is a modified version of the ETA 2836-2 – a reliable movement for a functional watch. While the ETA 2836-2 provides 42 hours of power reserve, the modified Cal. 690 loses some of it from the modifications, offering 38 hours. The Oris Big Crown ProPilot Worldtimer is a timely update to its predecessor and if you were a fan of the old one, chances are you’ll like this one even more with the new bezel system and cleaner aesthetic (thanks to a lack of pushers). The Oris Big Crown ProPilot Worldtimer is available for a price of $3,600 on leather or textile strap and $3,850 on crocodile leather or a steel bracelet – and as a final functional bonus, the deployant has a patented length adjustable system to ensure a better fit. oris.ch