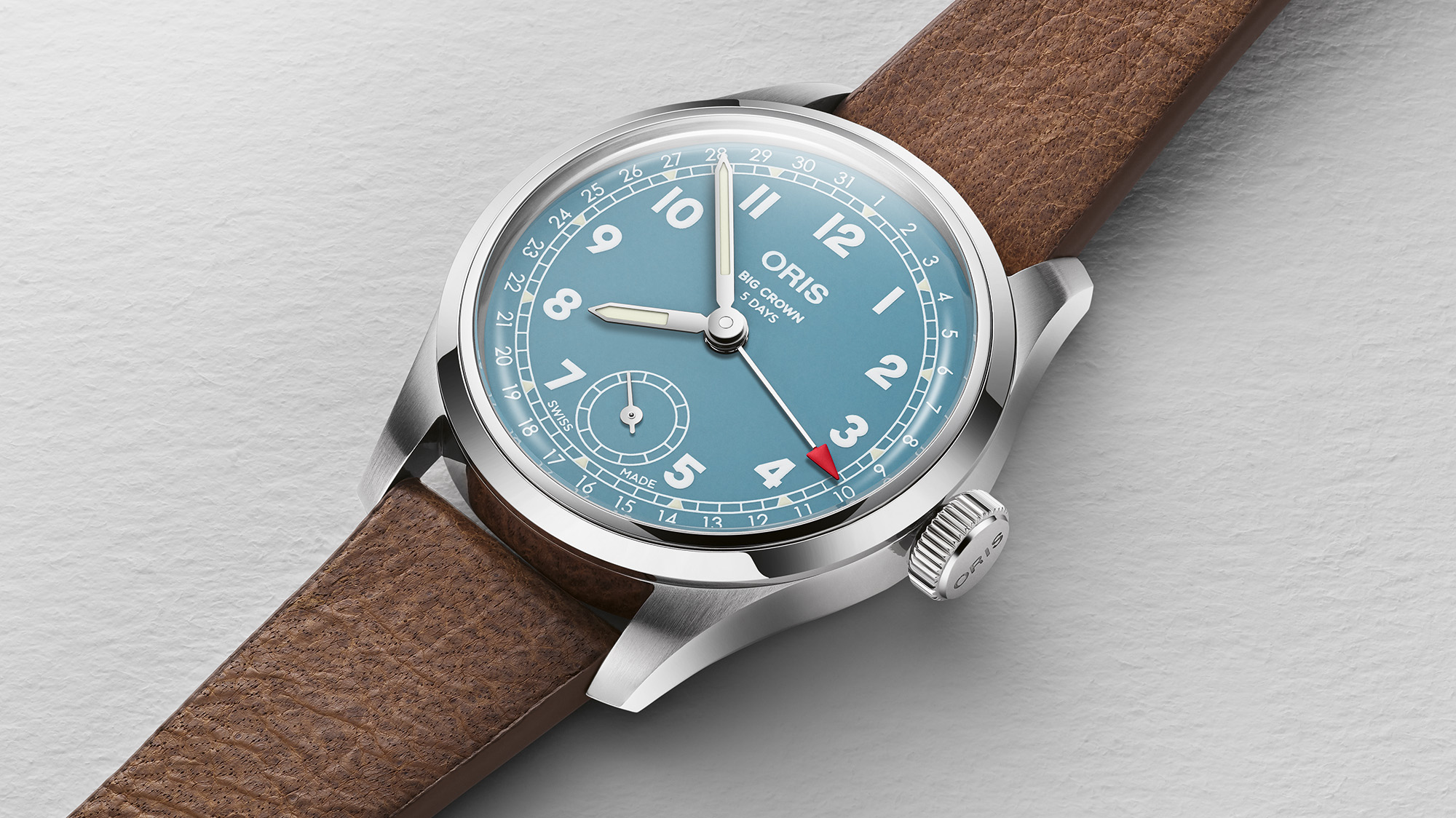 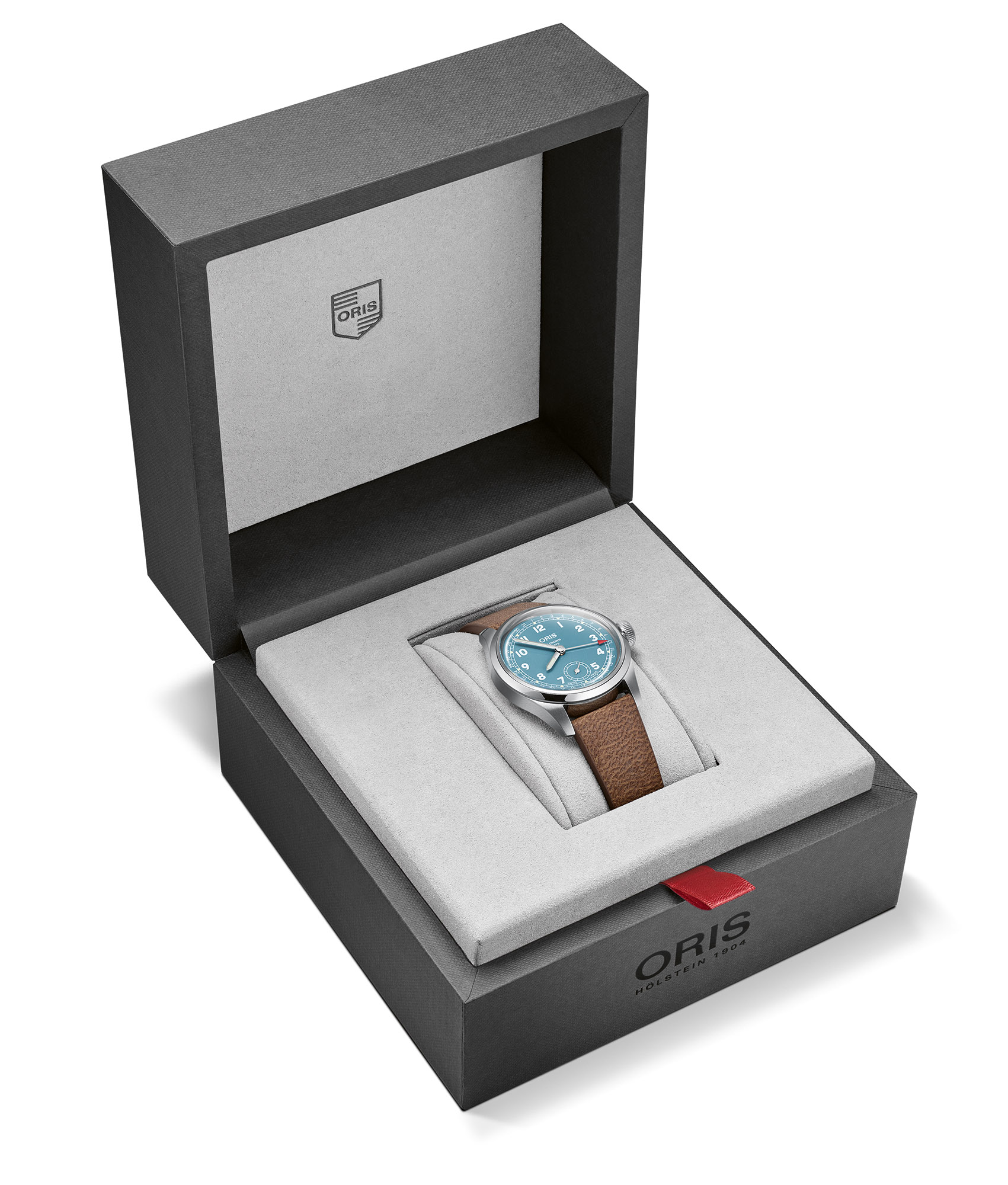 Fan-favorite independent Swiss marque Oris is in the midst of an in-house movement revolution. Since the launch of the Calibre 400 automatic movement in 2020, the brand has iterated and expanded upon the platform in a variety of ways, not only introducing the movement to each of its major product lines but offering variations with new complications and features. For its first release of 2023, Oris takes its next major step in this process, introducing a handwound take on the Calibre 403 pointer date movement with a caseback-mounted power reserve indicator. The new Oris Big Crown Calibre 473 is a clean and attractive introduction to the brand’s latest movement that plays to Oris’s strengths with a classic elemental design and sharp finishing throughout. 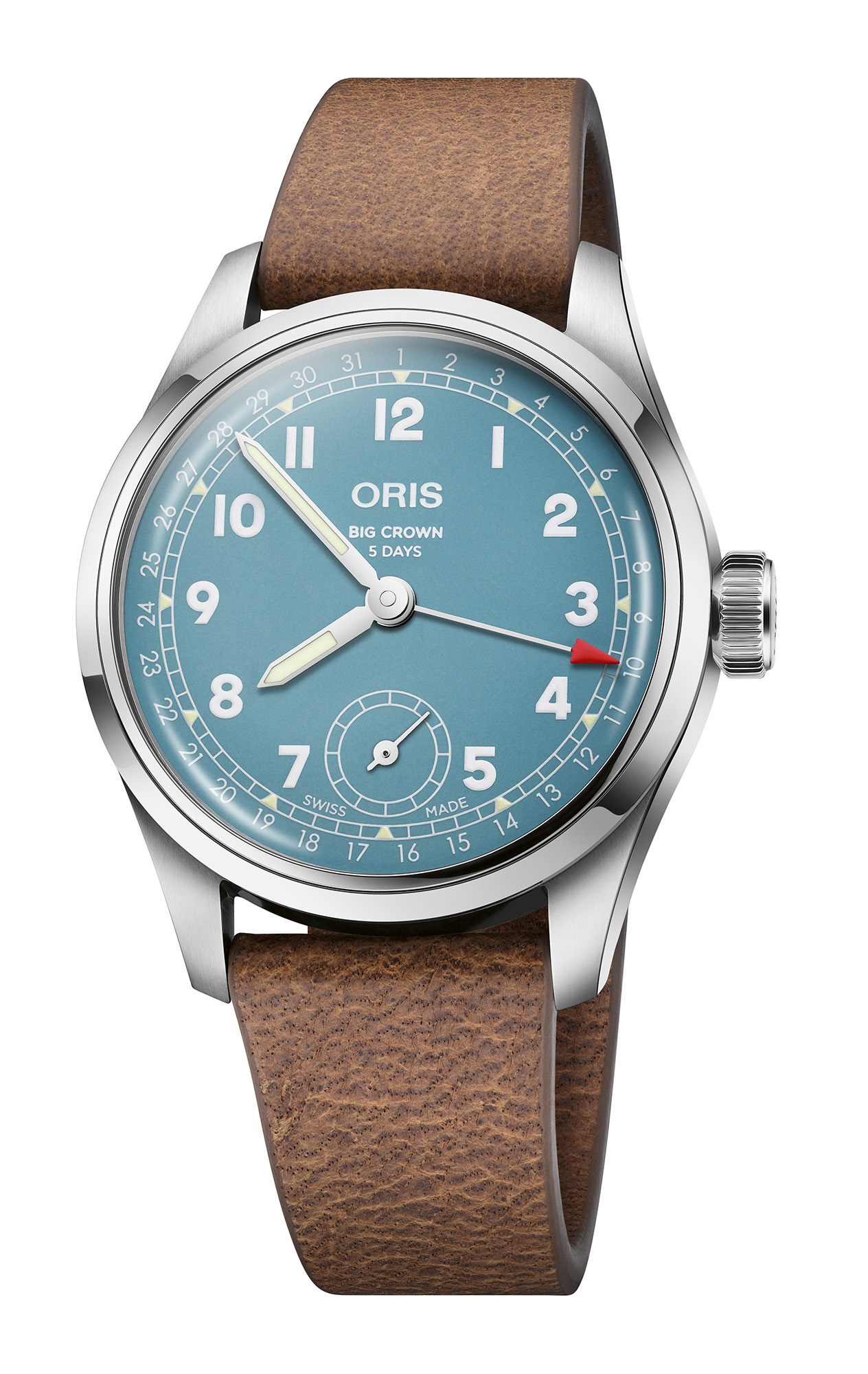 Like the Big Crown Pointer Date Calibre 403 that preceded it, the Oris Big Crown Calibre 473 begins with a compact and sporting 38mm stainless steel case. The overall case design is a bit on the conservative side, with tapering unchamfered athletic lugs and a narrow sloping polished bezel. The titular “big crown” at 3 o’clock is a broad and simple pillbox design, signed with an engraved Oris text logo. Oris gives this design a more distinctive personality through its sapphire display caseback, with a wide aperture that maximizes the view of the new in-house handwound movement in initial images. Given that the Big Crown collection is positioned as the brand’s everyday, “do-anything” line, however, the 50 meter water resistance rating is decidedly underwhelming. 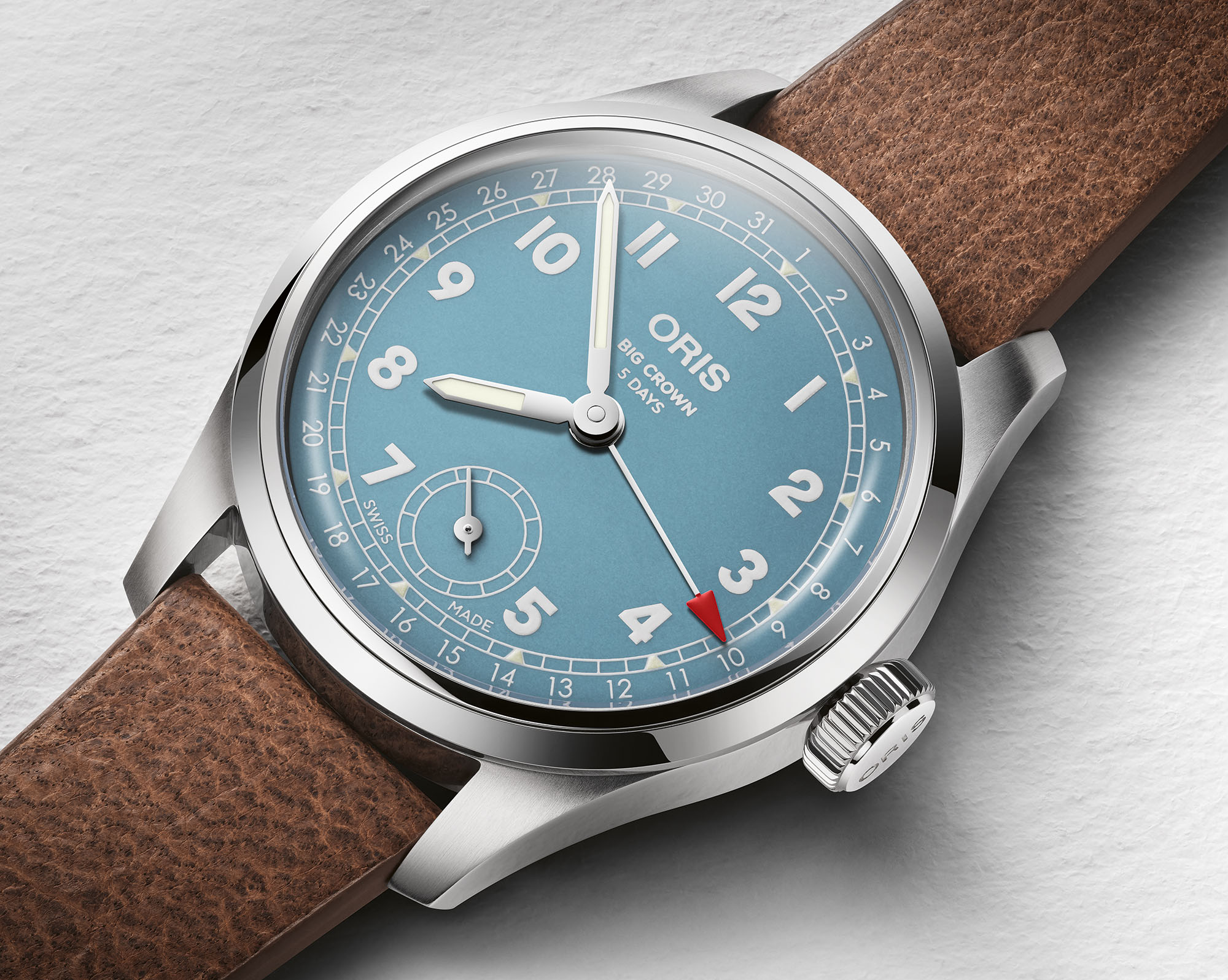 In order to visually set the Big Crown Calibre 473 apart from its stablemates, Oris pairs a familiar dial layout with an intriguing new colorway. The slightly muted matte ice blue hue of the dial surface calls to mind images as diverse as glaciers and faded denim in initial photos, and features a mild dègradè effect to add a sense of depth and patina. The rich red arrow tip of the signature Oris pointer date hand complements this color well in images, adding a spot of more vivid contrast while leaving the overall layout tastefully restrained. The railroad outer date scale, bold and simple printed numerals, and the straight sword handset are all hallmarks of the more vintage-oriented side of the Big Crown lineup but carry enough visual nuance to feel distinctive. 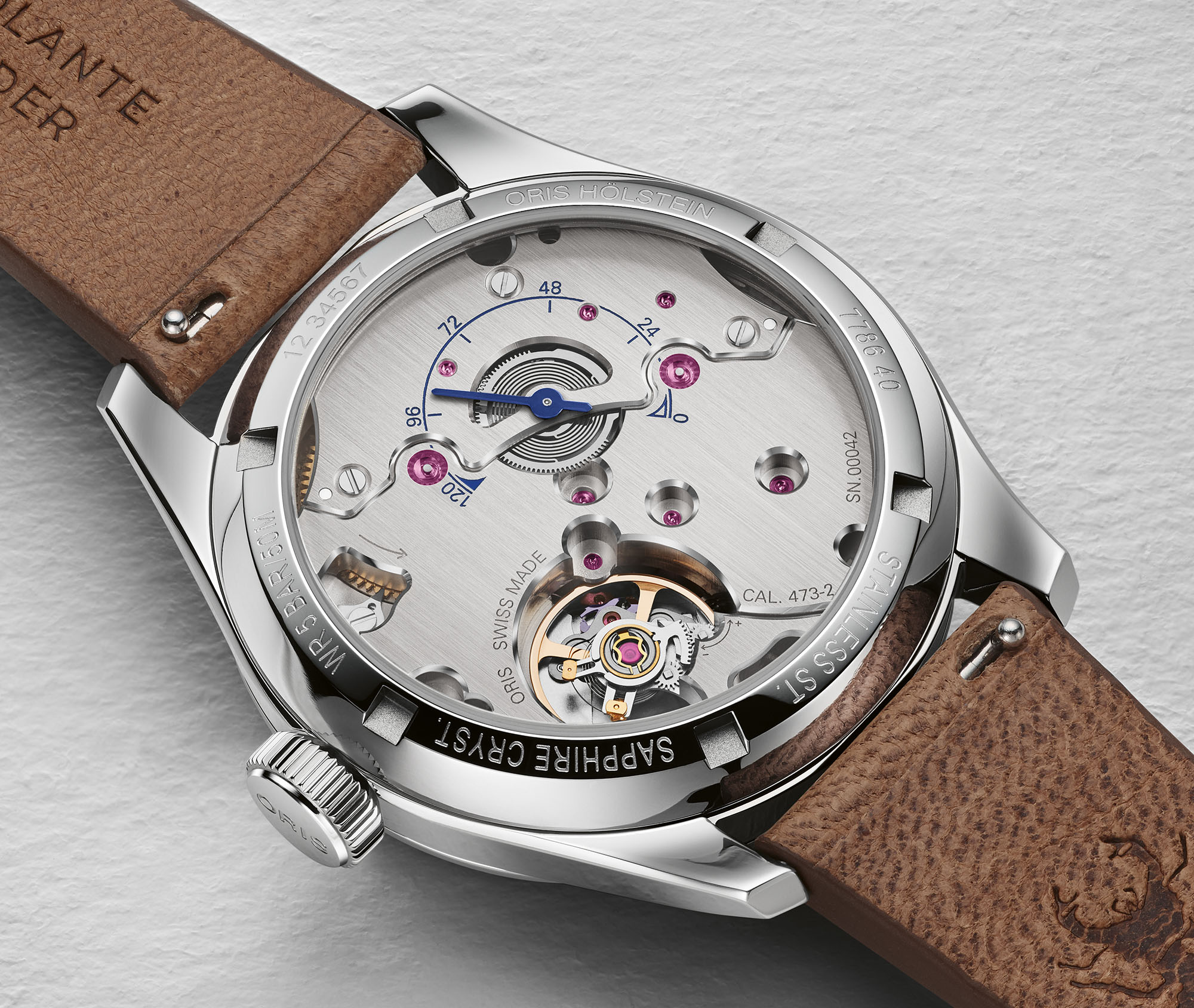 The centerpiece of the Oris Big Crown Calibre 473 is its new Calibre 473 hand-wound pointer date movement. Built on the Calibre 403 platform, this is the brand’s first attempt at a rotor-less powerplant in the broader Calibre 400 family. Beyond the lack of a rotor, the Calibre 473 also brings with it a substantial rearrangement of the movement layout, with nearly full directionally brushed bridges adorned with polished anglage. A set of polished gem sinks adds further visual highlights beyond the often basic finishing of the Calibre 400 line, but the real visual standout is the newly added power reserve indicator. Featuring a cutout window atop the mainspring to visually emphasize the current reserve, this slim-blued needle hand and elegant, airy blue scale adds a wealth of charisma to the movement design in images while providing useful information. Speaking of the power reserve, like the Calibre 403 platform that forms its base, the Calibre 473 provides a massive 120 hours of power at a 28,800 bph beat rate. As with its predecessors, the rest of the Calibre 473’s performance figures are similarly impressive, with a claimed accuracy of -3/+5 seconds per day (falling within COSC specifications, but Oris does not submit these movements for chronometer certification) and a hefty 10-year warranty and 10-year recommended service intervals. To complete the package, Oris pairs the watch with a textured stitchless strap in medium brown Cervo Volante deer leather. 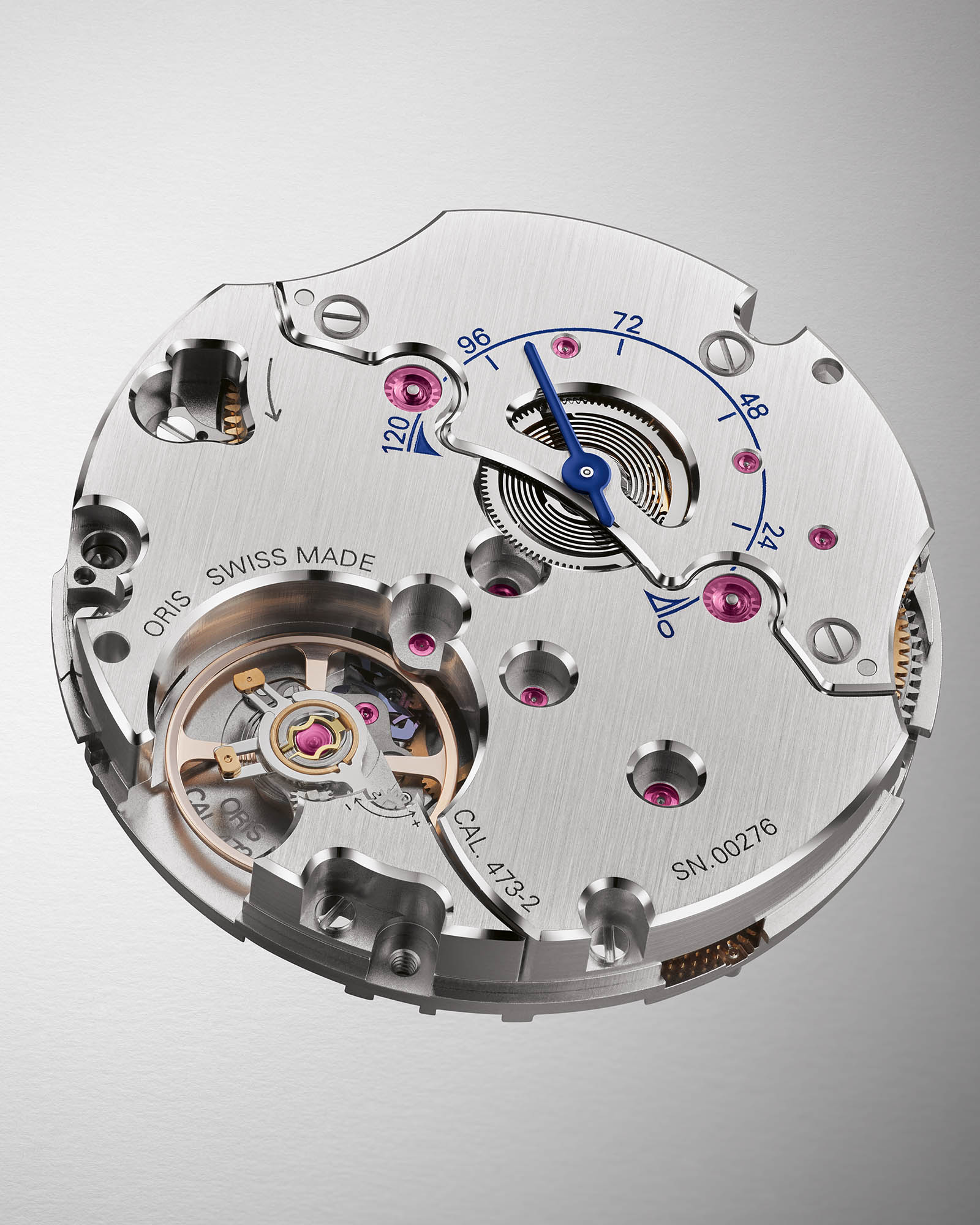