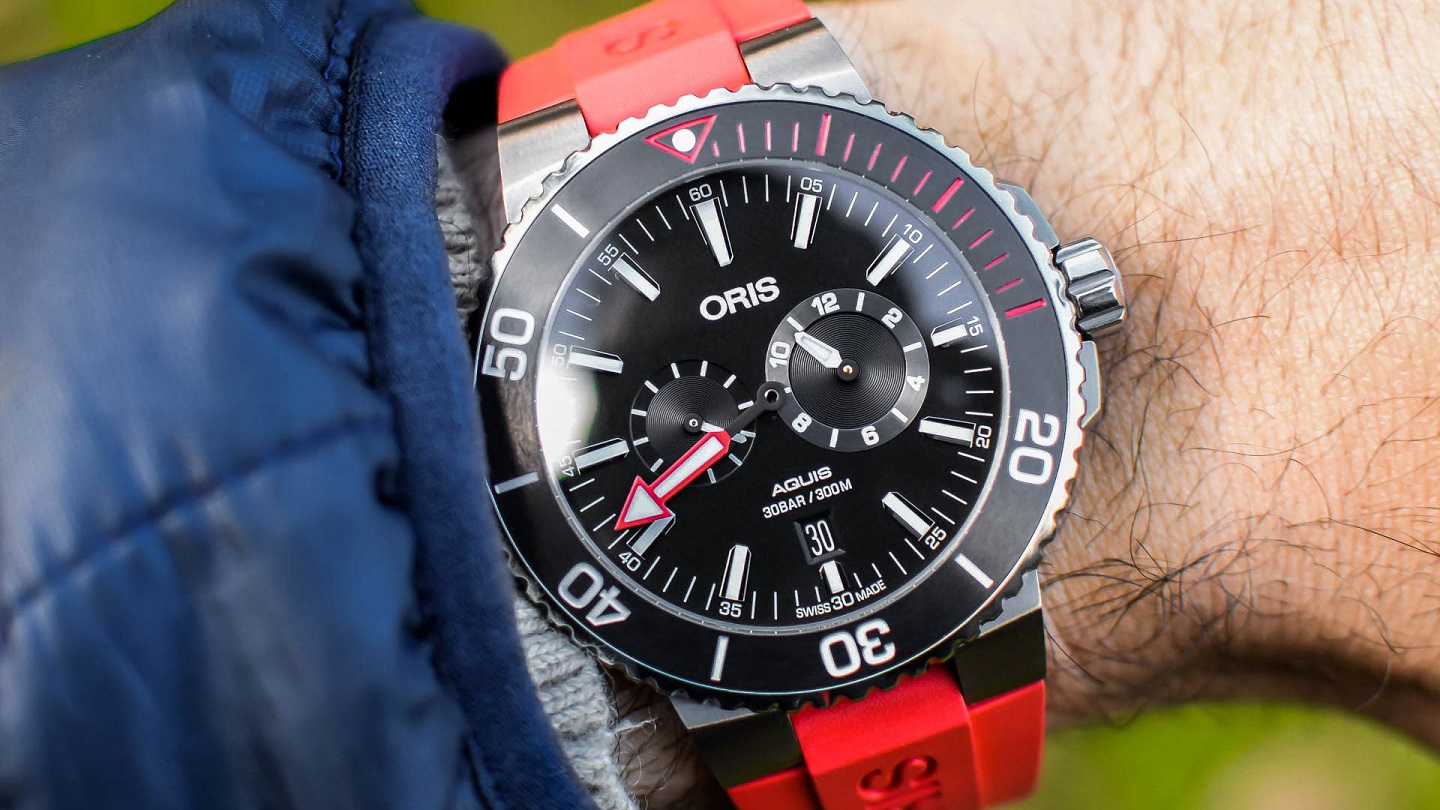 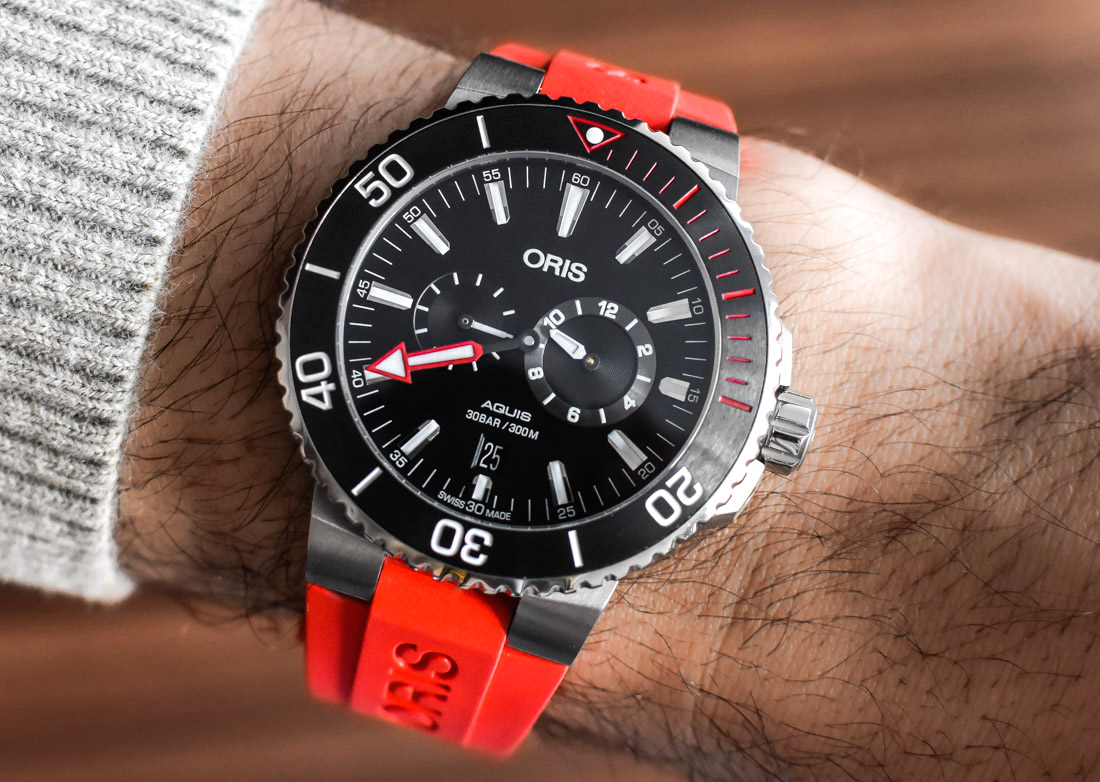 Sit down and have a serious discussion with any budding watch collector and you can probably bet that at some point, the two of you will eventually land on the topic of dive watches. There’s no way around it – we’re crazy about them, obsessed with the durability, and in some cases, I’ve seen folks collect hundreds of them, if not more. But that can get, boring, right? After Oris announced the recently redesigned Oris Regulateur ‘Der Meistertaucher’ in 2017, I had been feeling a bit of dive watch-fatigue, especially after carefully reviewing my own personal collection. However, after learning more about its regulator layout and the fact that Oris was actually the first to develop a regulator-based dive watch back in 1999, I knew I had to give it a shot. The result was some time well-spent with a watch that not only taught me the importance of basic day-to-day utility, but also uncovered some new personal watch collecting preferences, which I’m constantly discovering as a growing watch enthusiast. 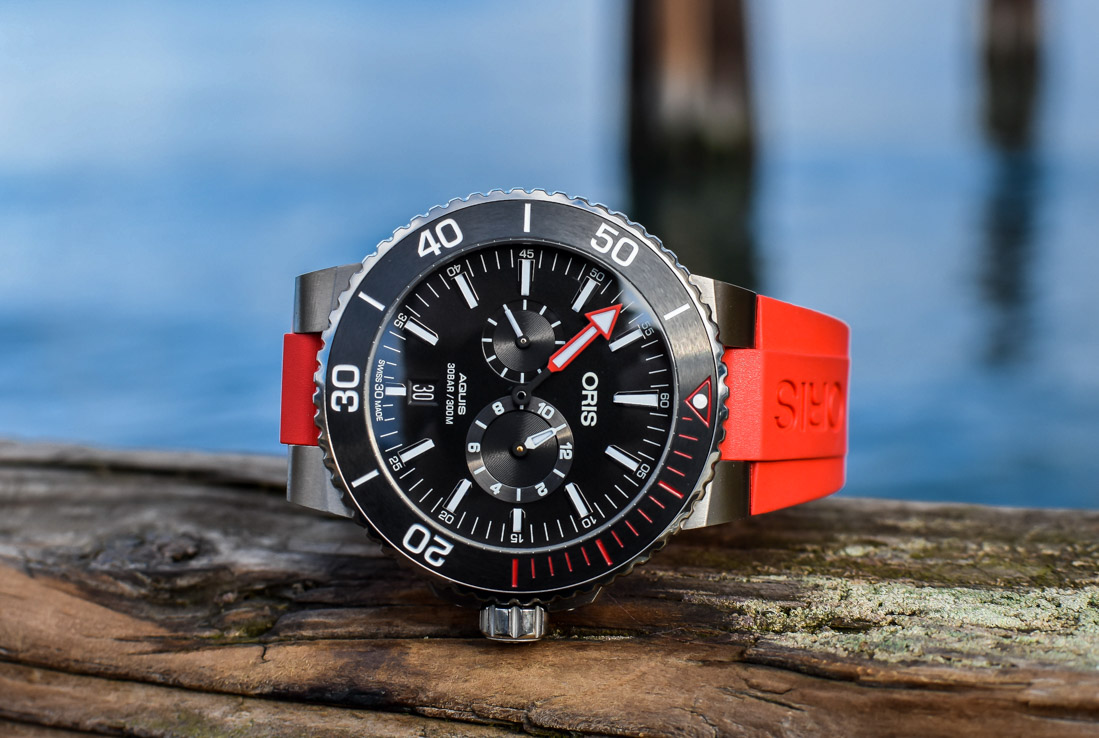 Privately held and founded in 1904, Oris is still “the little guy” in the grand scheme of things. But I almost wouldn’t have it any other way and to me, there’s a certain sense of respectable charm in what they do. Even after reviewing their most recent releases, it feels like I’m rooting for my favorite indie band that still insists on ditching the tour bus in favor of the 15-passenger van – the brand does its own thing and I think many would agree that they have something for everyone. Pair that with their frequent charitable ocean conservation efforts like the Oris Hammerhead Limited Edition or the recent Oris Aquis Clipperton Limited Edition and you have a brand that’s going to grab my attention almost every time. 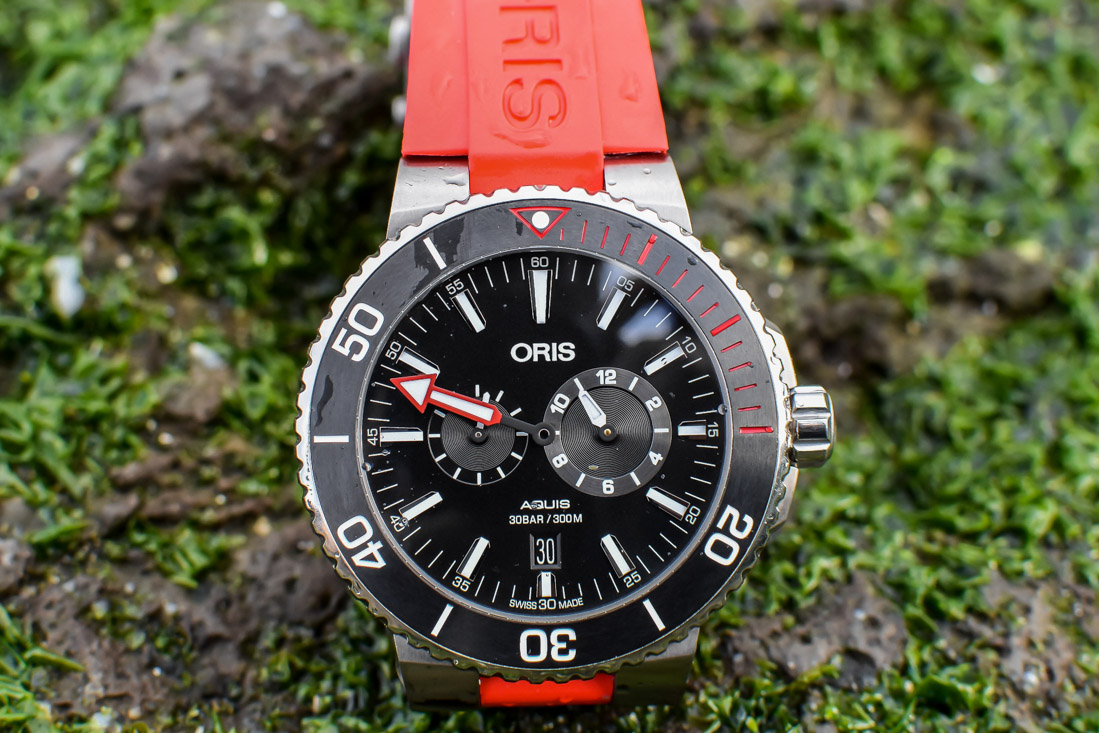 Even without taking the specifics into consideration, the Oris Regulateur ‘Der Meistertaucher’ is just a fun watch. The bright colors and the sense of discovery one feels when adjusting to the regulator display make for a great experience no matter what kind of collecting you’re into. Because I knew the watch was already capable of surviving a dive expedition to one of the world’s most remote coral atolls in the eastern Pacific, I figured I’d put it through more of a landlubber’s test and take it on a few trails here in Washington. Unsurprisingly, the watch took everything I threw at it. So let’s get down to business and have a closer look. 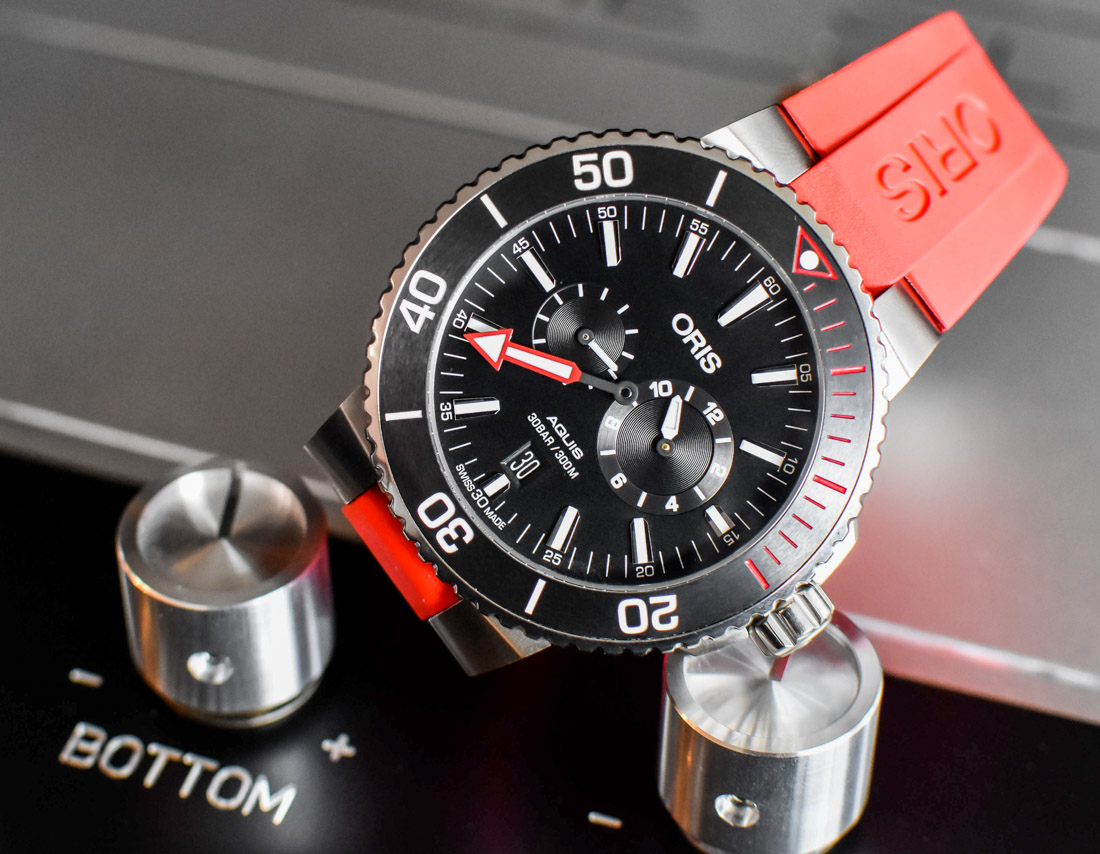 Not unlike their most popular models, the Oris Regulateur ‘Der Meistertaucher’ retains the same Aquis case shape in a very comfortable 43.5mm case diameter. The case itself is made entirely out of titanium, which also led me to experience somewhat of an adjustment period since I’m not really used to its lightweight nature. Nevertheless, the weight, or lack thereof, never left me questioning the watch’s quality. It’s simply a matter of comfort and when you pair the watch with the rubber strap like I did, you can just totally forget the Oris is even there. I know people have waxed poetic about this kind of stuff before, but I feel like this combination automatically qualifies the Regulateur as a perfect “vacation watch.” 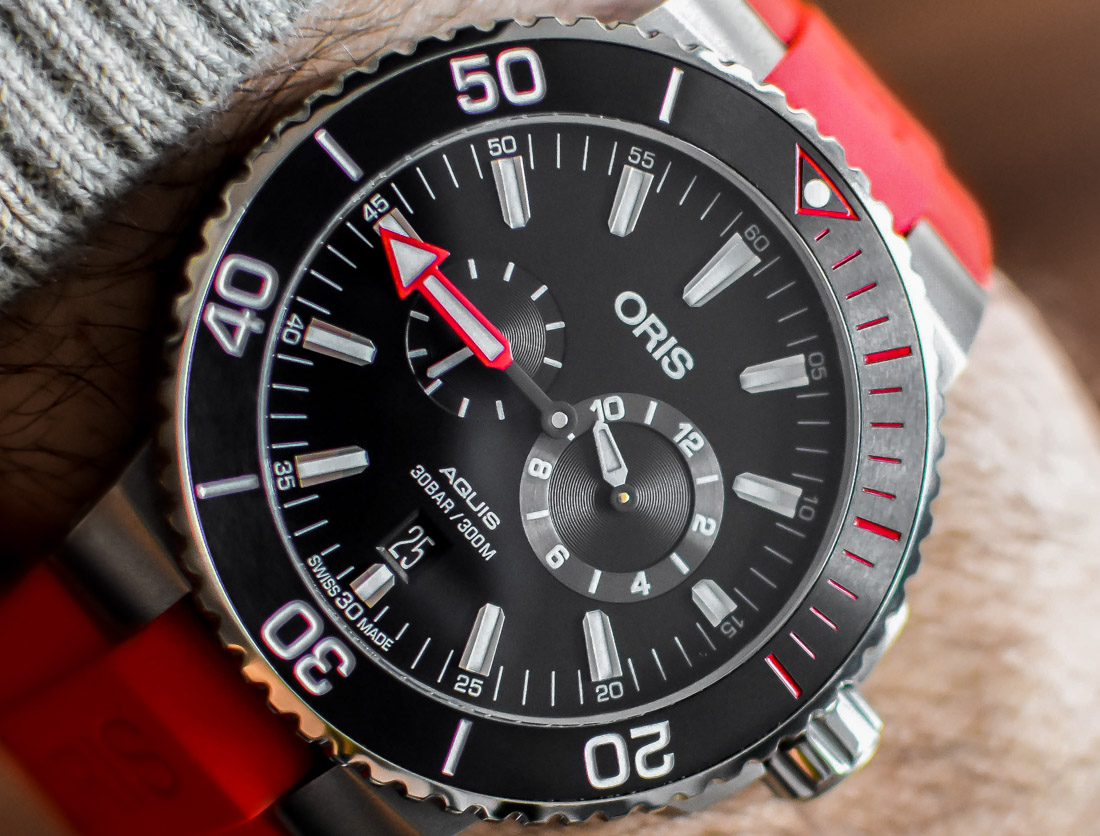 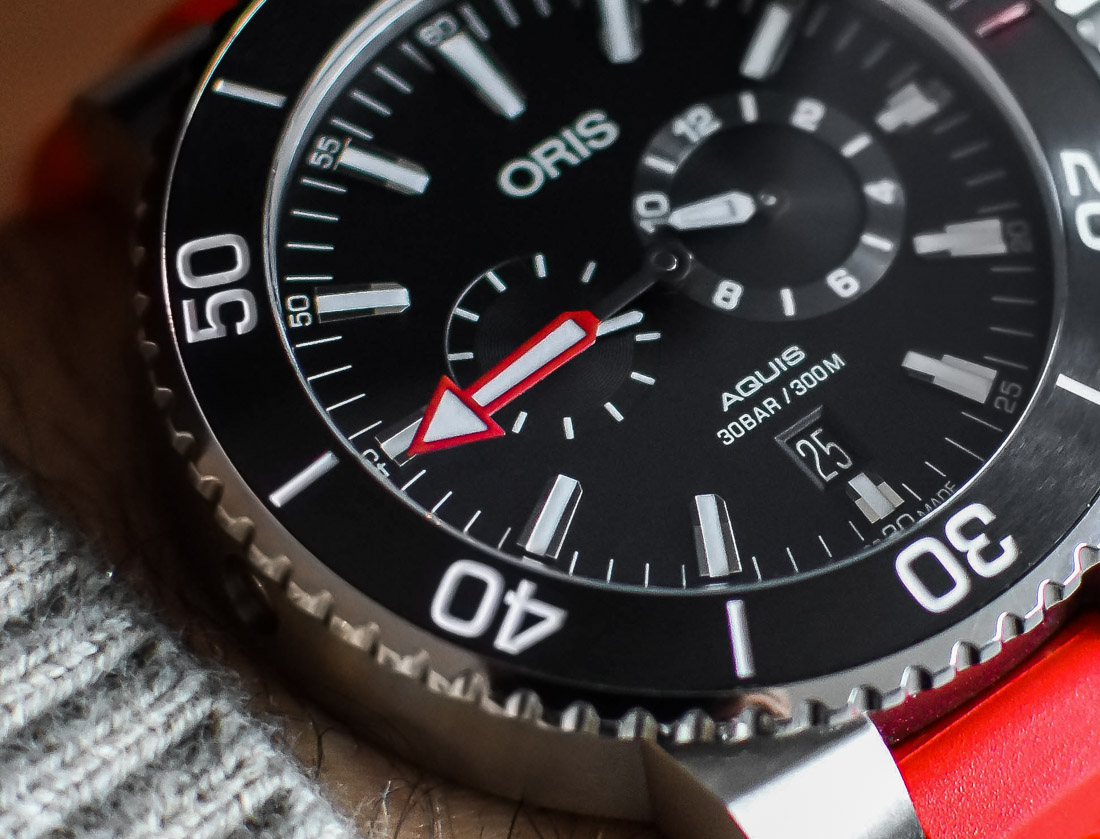 The bezel – with its matte black ceramic insert – sits flush with the case. It’s pleasantly tactile, accurate, and doesn’t protrude over the case too much like some other dive watches. Once again, this is a key component that works with the regulator readout and when you combine the two, the watch serves as a practical and very legible tool that measures elapsed time – but we’ll get to that later. Other features include a screw-down crown (supports the 300m of water resistance), sloped lugs that integrate beautifully with the rubber strap, a screw-down caseback, and an automatic helium-release valve built into the side at 9 o’clock. My only gripe here is how easily the titanium can scratch, but that’s to be expected and part of the trade-off when you reach for an all-titanium watch. 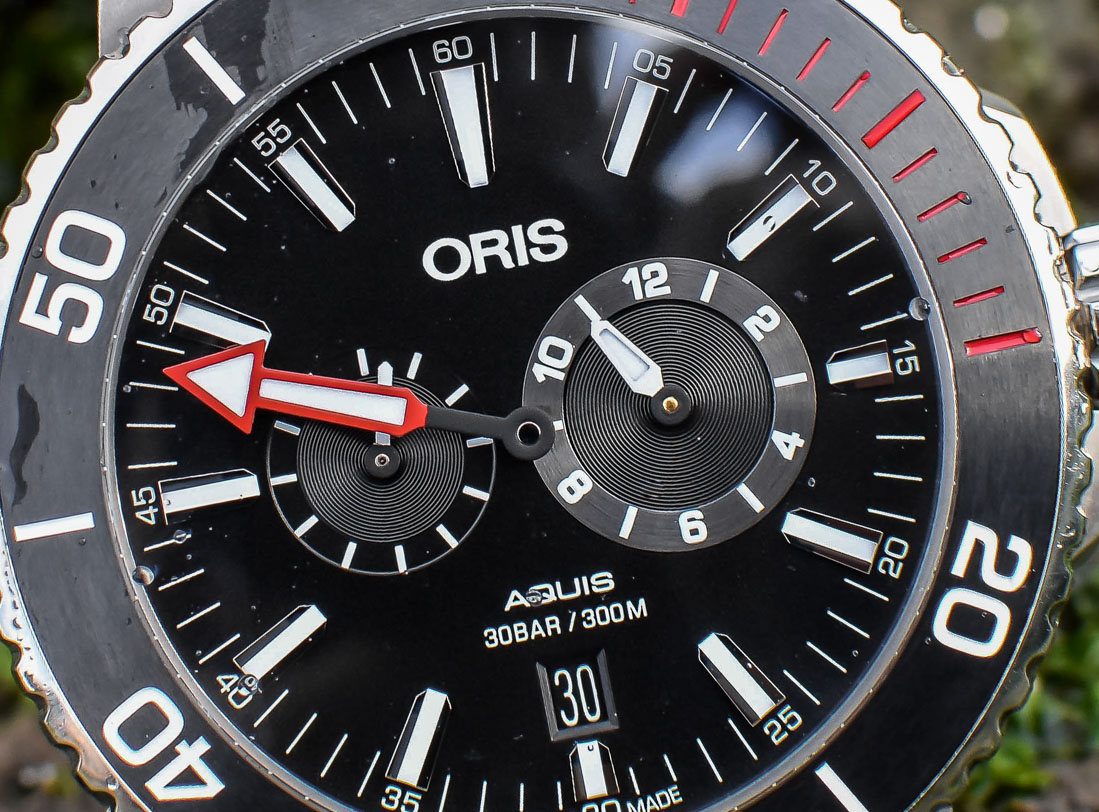 Here’s where things get fun after training your brain to read the regulator display. The dial itself is deep black with faceted indices that give off a nice, glitzy effect whenever light bounces off of them. That’s pretty much the only element of flash you’ll find in this watch but it’s also important to familiarize yourself with the layout, which centers around two prominent sub-dials. At 3 o’clock, you’ll find the sub-dial for hours and at 9 o’clock you have the running seconds – simple enough. The large, central red hand then indicates the minutes. One of the nicest details here is the matte black treatment given to the inner portion of the minute hand, which makes it appear as if the hand is floating just over the dial. Once you get a sense of where to find the hours, it’s basically just like telling time on a traditional analog display. 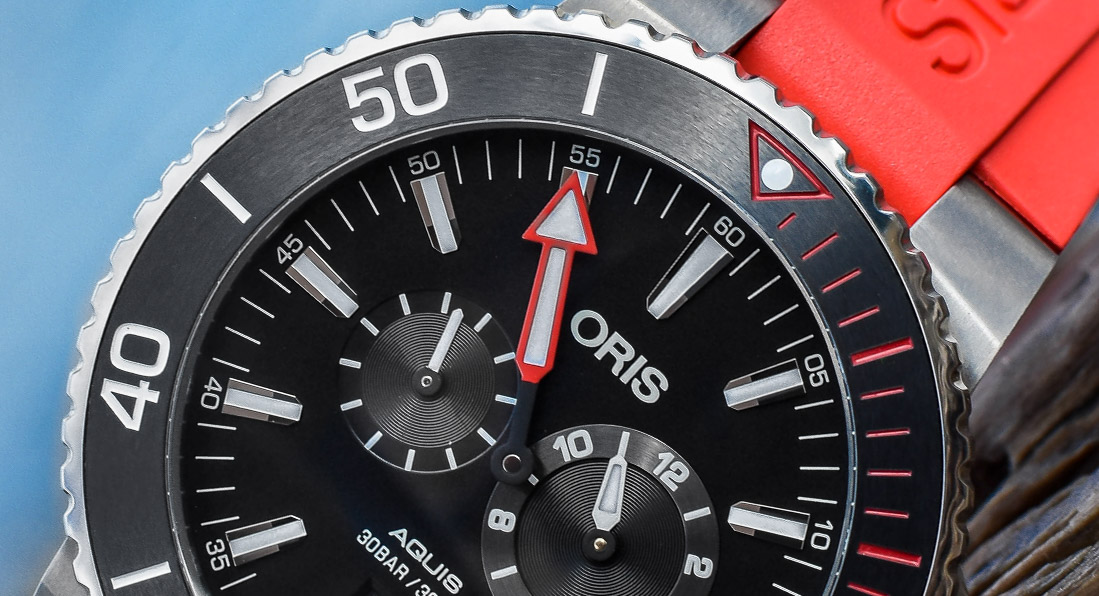 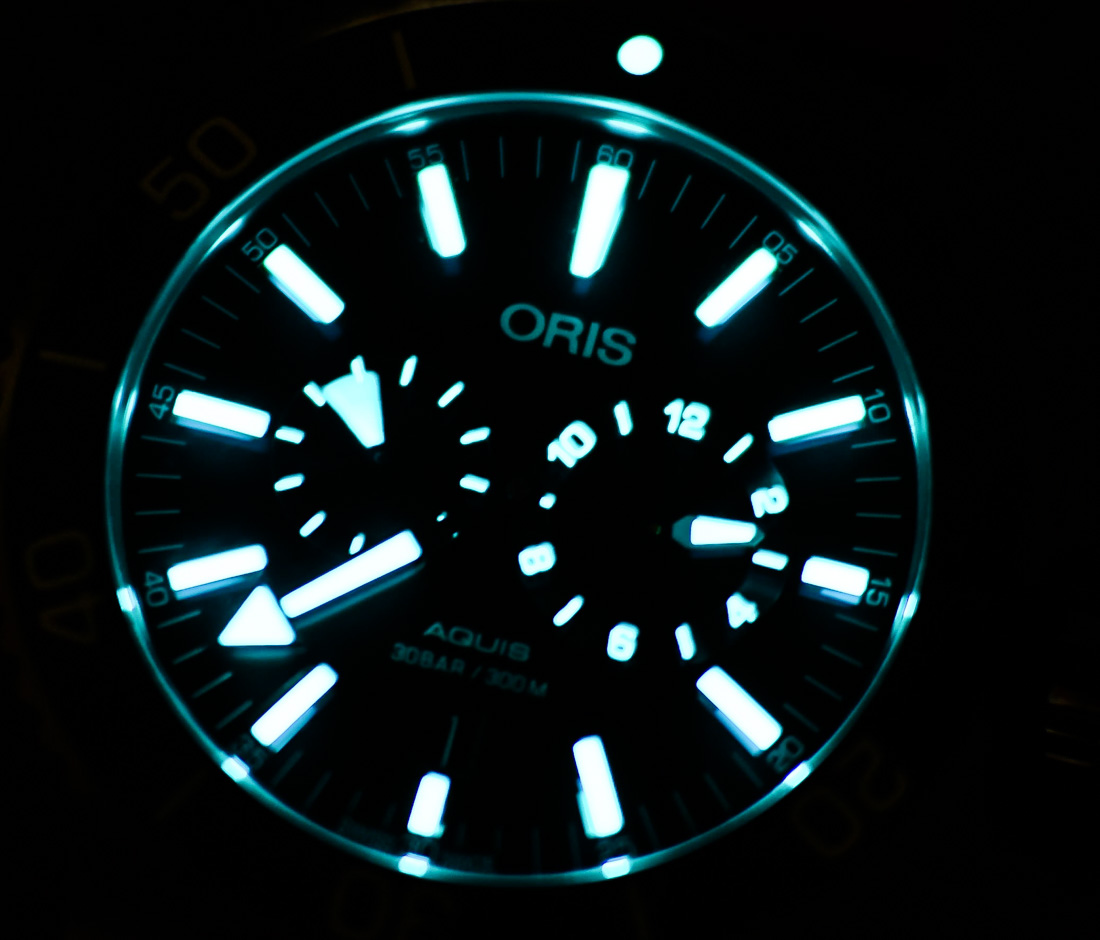 While the regulator display is easy to get used to, I found one issue that bugged me. There will be times throughout the day – say 10:15 or so – when the massive minute hand will completely cover the small hour hand in its sub-dial – or at least what it’s pointing to. As a result, it can be difficult to quickly get an accurate readout of the time. But, that isn’t really the Regulateur’s forte and the point here is to provide the wearer with a fast way to track elapsed minutes. If you think about it, you have to wonder why more brands haven’t tried executing this in their dive watches. Then again, I feel that a dive watch’s true utility in the field can still be up for debate – but I’ll leave that up to the dive experts to decide. Otherwise, Oris did a great job in terms of symmetry and I’m grateful for the minimal and well-integrated date window at 6 o’clock. Lume is also sufficient and the cool, aqua shade of BGW9 is a real treat when you manage to catch it against the strap’s hot red tone.